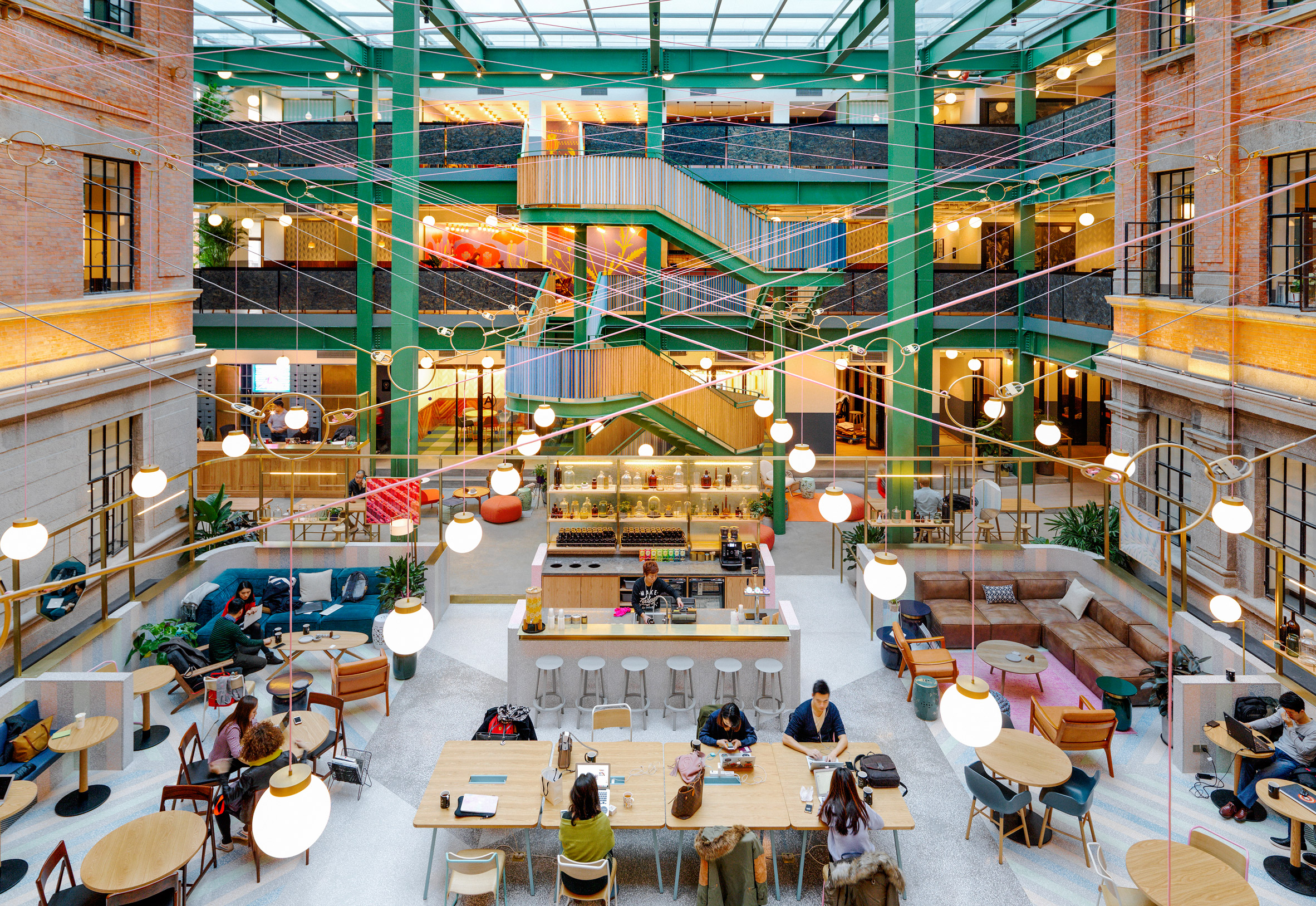 Local studio Linehouse overhauled the derelict 20th-century building to create a grand, hotel-like space that references its history as a store for opium, and then as an artist’s residence. 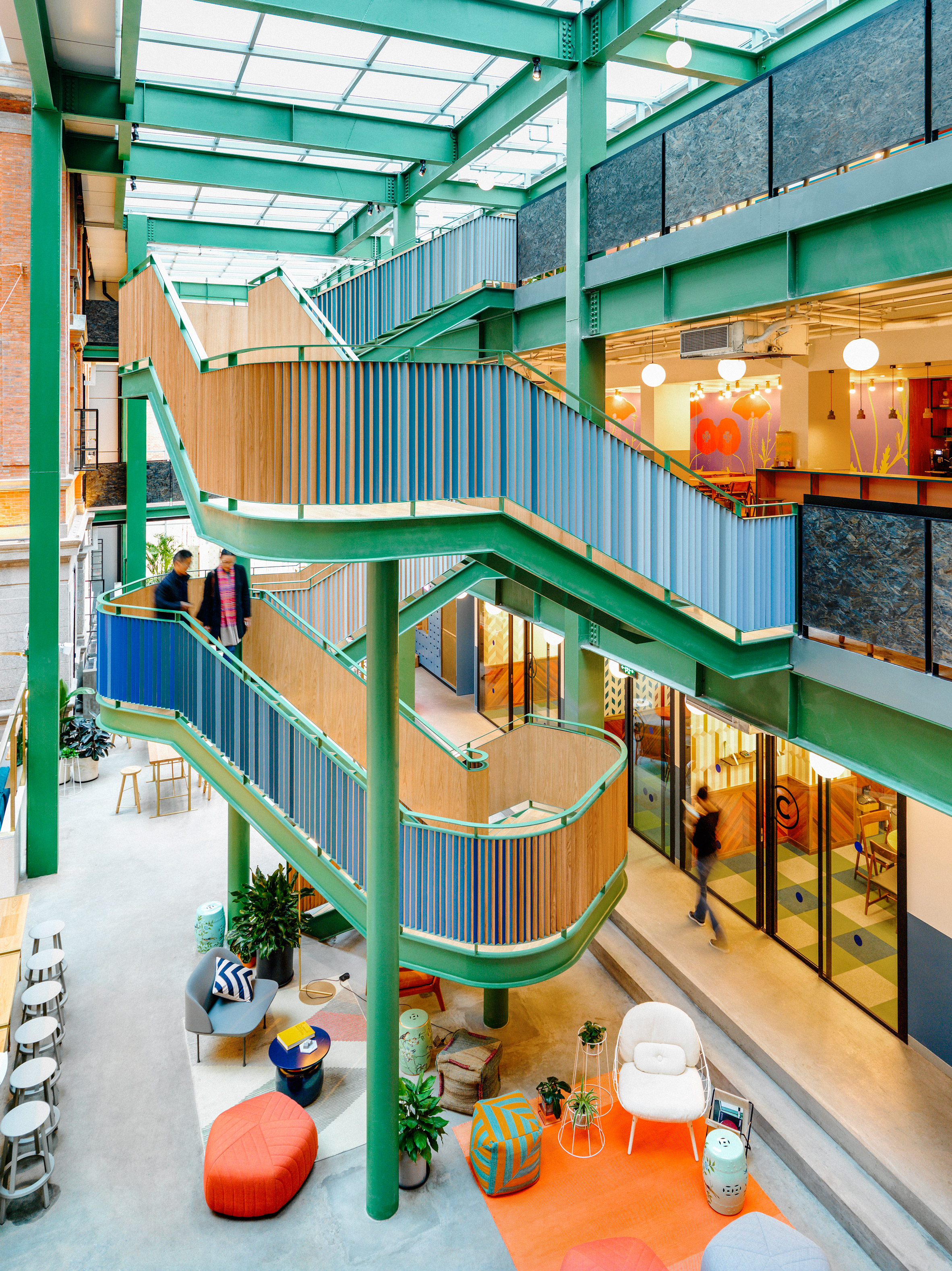 “WeWork Weihai Lu is nestled in a turn of the century brick building; a former opium factory and artist residence. This building is surrounded by an old residential district in the heart of Shanghai,” said the studio.

“Linehouse celebrated the grandeur of the building, encapsulating the feeling of a grand hotel, transporting guests and members on an unexpected journey of whimsy, voyeurism and festivity.” 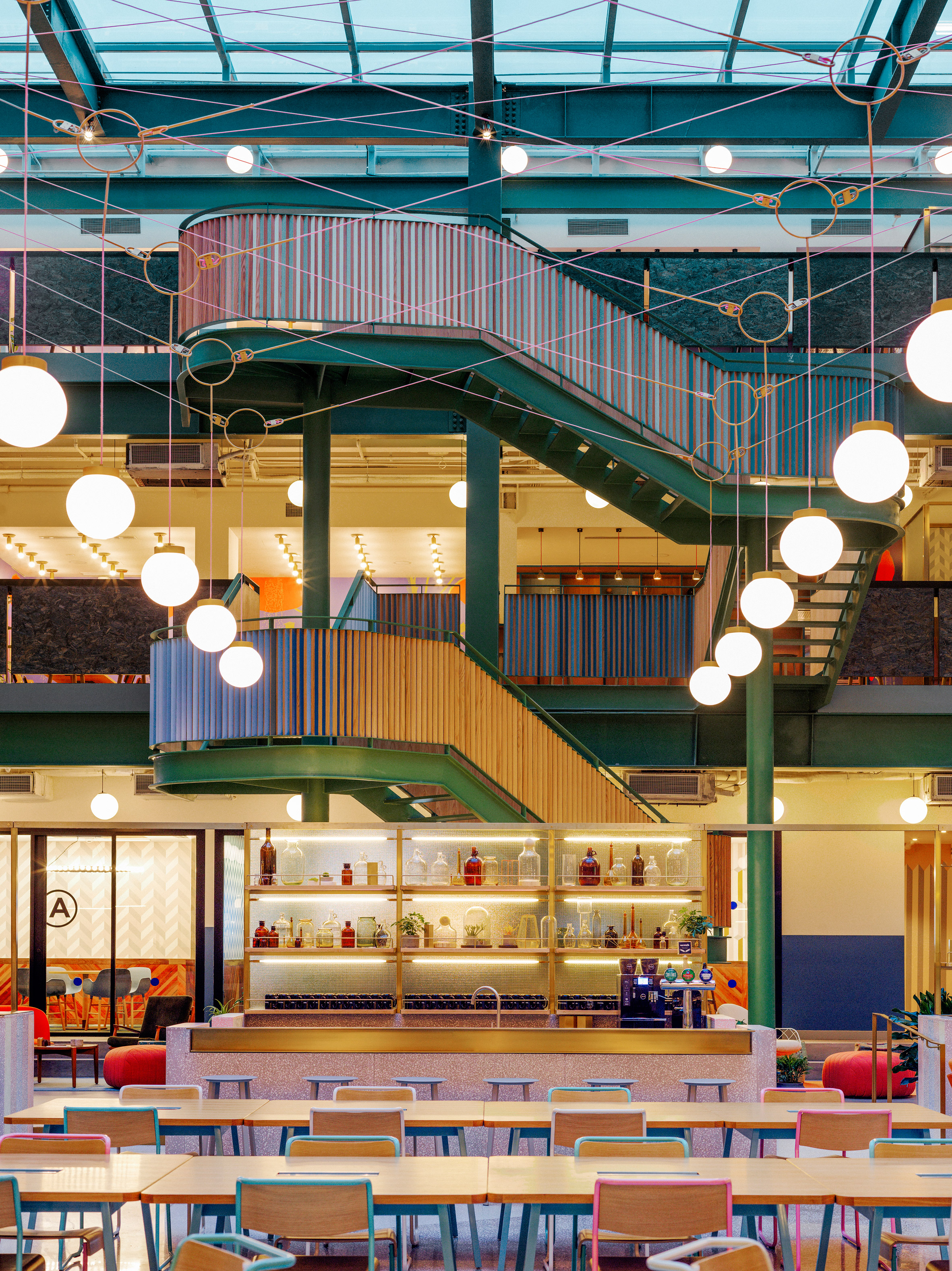 The studio repainted both the existing steel structure and the staircase that weaves through up the main circulation space an ivy green.

Prism-shaped flats of oak wood clad the staircase, which connects all three levels of the front of house area. One side is painted in hues of blue that alternate up the staircase to create a gradient of tones from natural wood to blue. 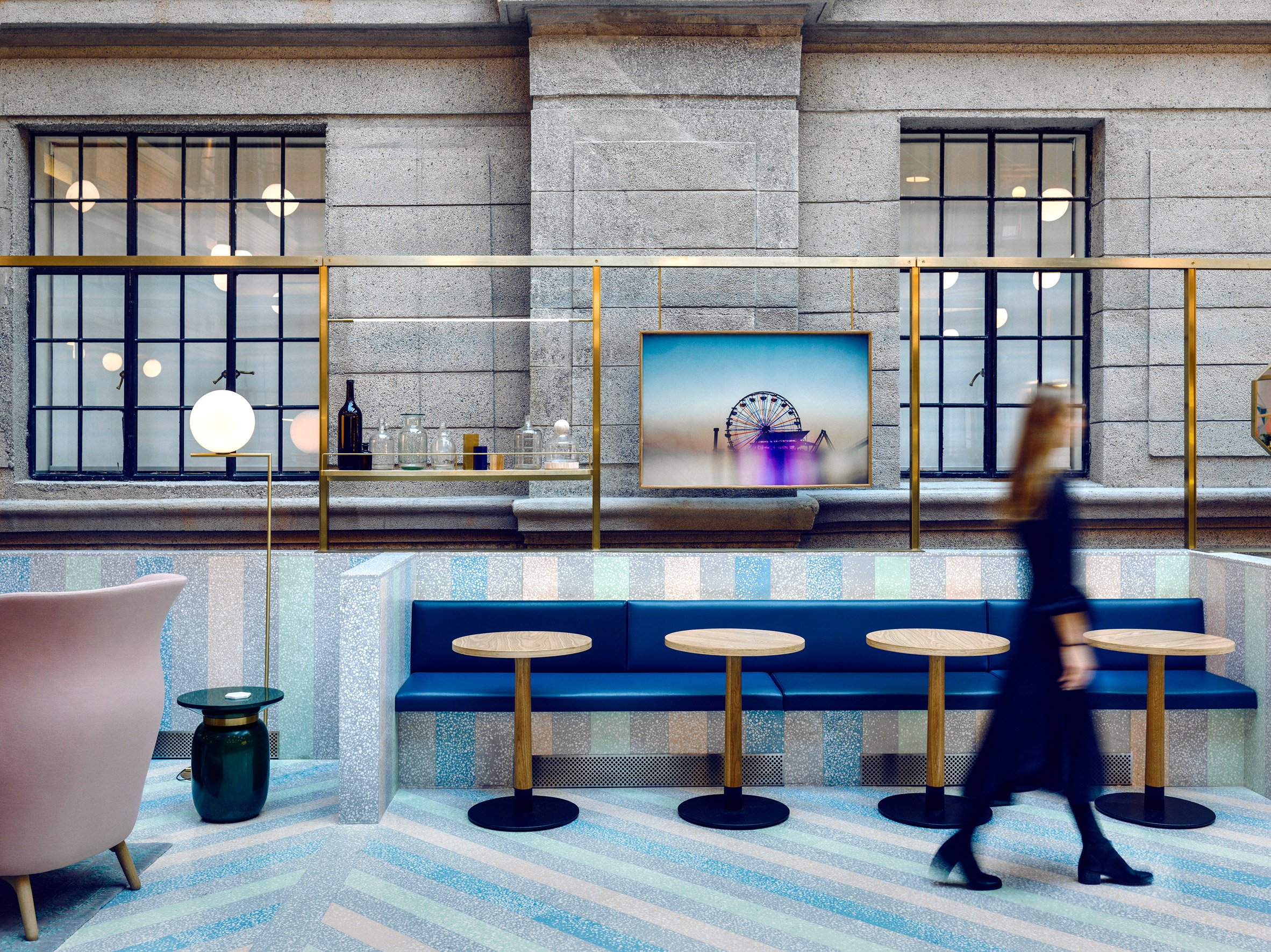 On the three levels, a new black metal handrail with black-stained chipboard balustrades wraps the triple-height atrium space, allowing guests to be spectators to the activities below.

Two pantry areas on these floors are covered with hand-painted gold poppy printed wallpaper – a reference to the opium factory.

The U-shaped brick building wraps a courtyard, which creates a three-storey atrium surrounded by the existing facade – now occupied by an open-plan workspace and bar.

A curved terrazzo tray slots into the central atrium to define the space, and is decorated with a pattern of pastel-coloured diagonal stripes. 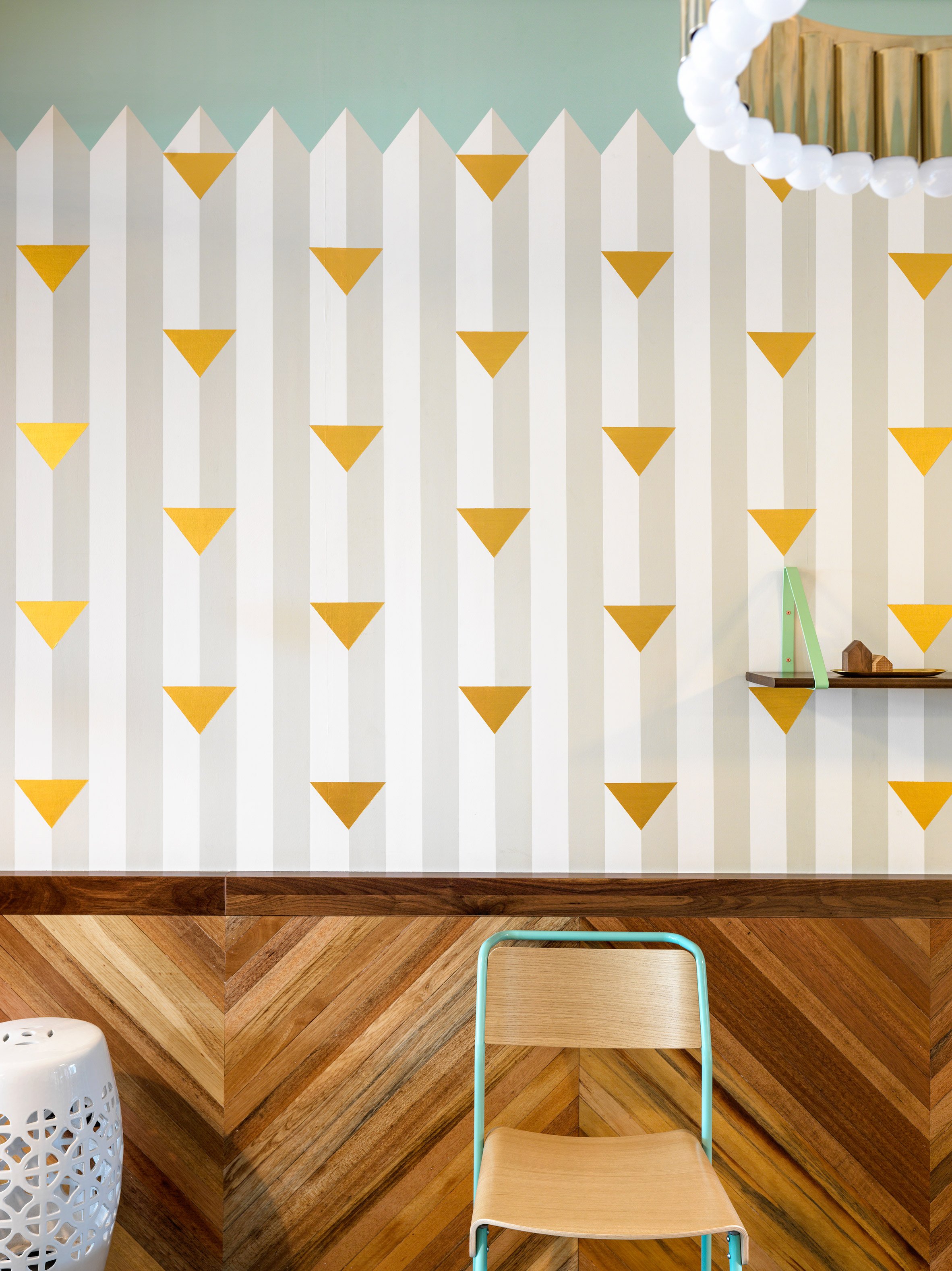 Terrazzo walls are used to partition different areas in the open space. A bench with dark blue cushions slots into one area, while a brown leather sofa occupies the corner.

Wooden tables of various shapes furnish the space along with dark blue hardshell chairs. One the other side are larger tables for more collaborative working. 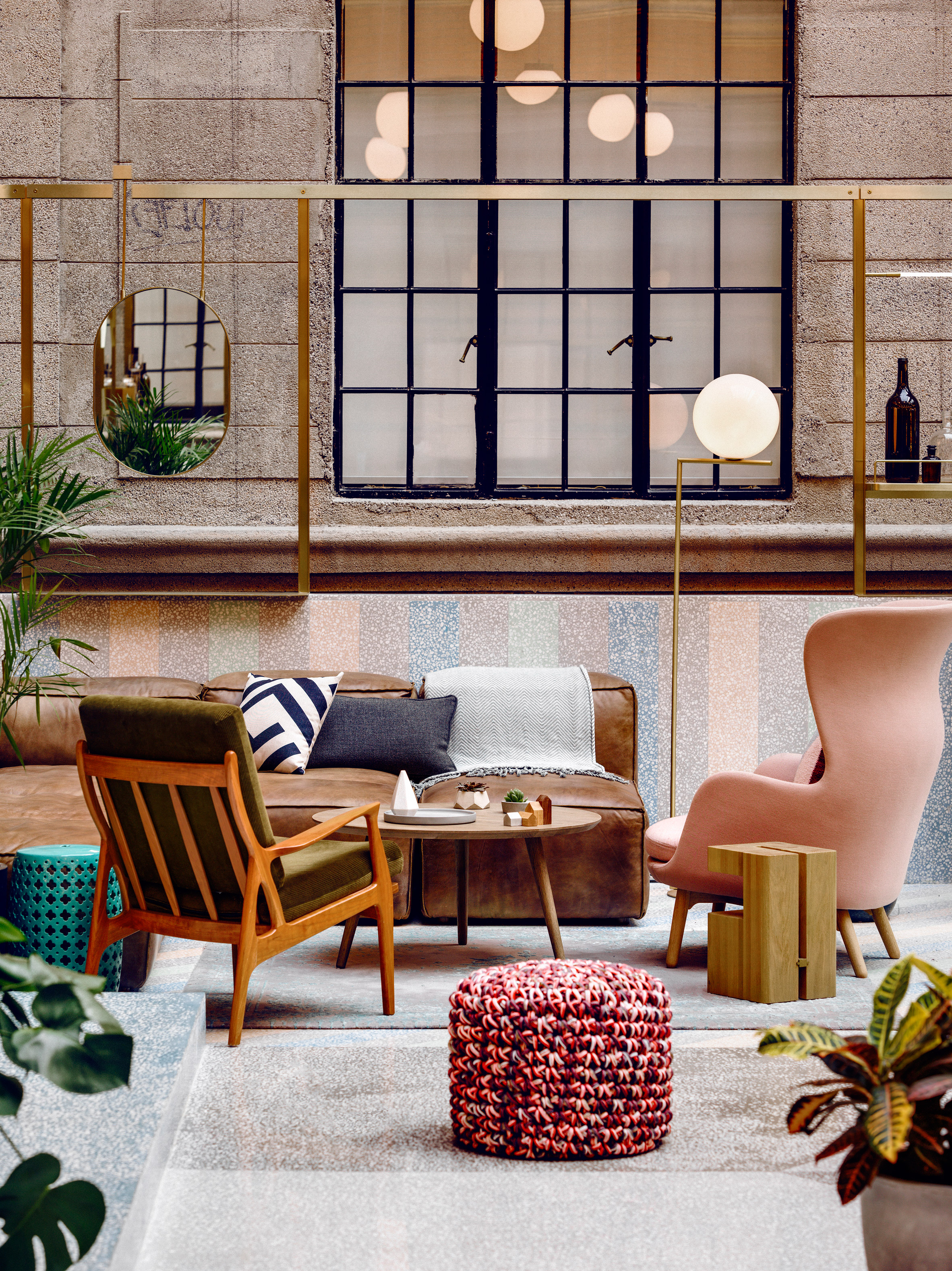 A custom-made light installation is suspended above the triple height space. It features a web of pink and grey cabling threaded through circular bronze rings, which hang custom glass shades.

A bronze structure mounted on the terrazzo perimeter wall creates a framework for hanging mirrors, artwork, shelving and lighting. 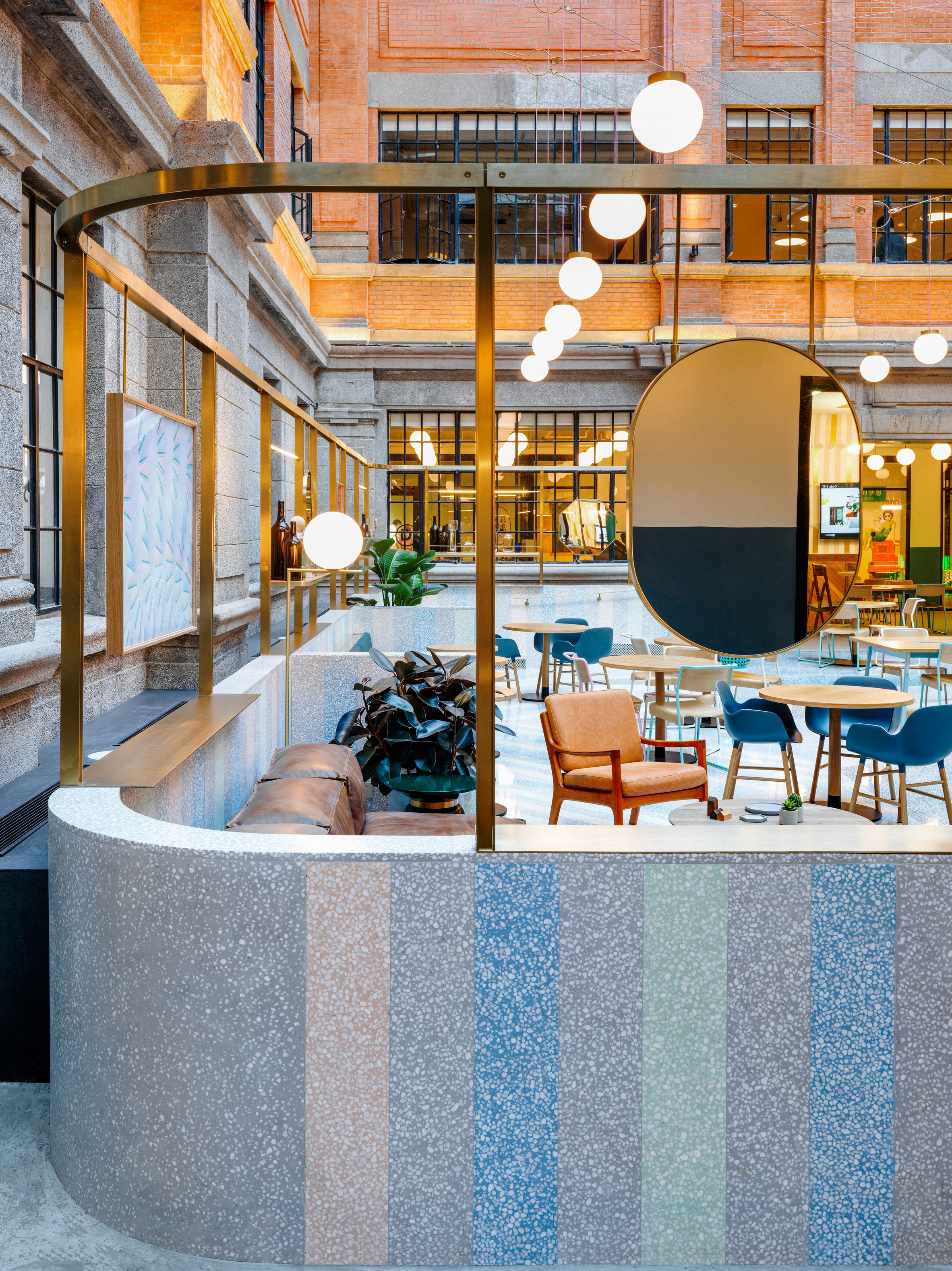 When arriving, members enter through an old laneway framed by a traditional Chinese arch with lights suspended above. The walls are painted pink and the concrete floor is tinted in a similar hue.

The reception area is located between the existing and the extensions, so Linehouse clad the desk in heritage wood panelling but surrounded the base with concrete – a play with the in-between zone of the old and new.

Behind the reception, a blue-painted cabinet of curiosities hosts a neon sign reading Ring For Service. 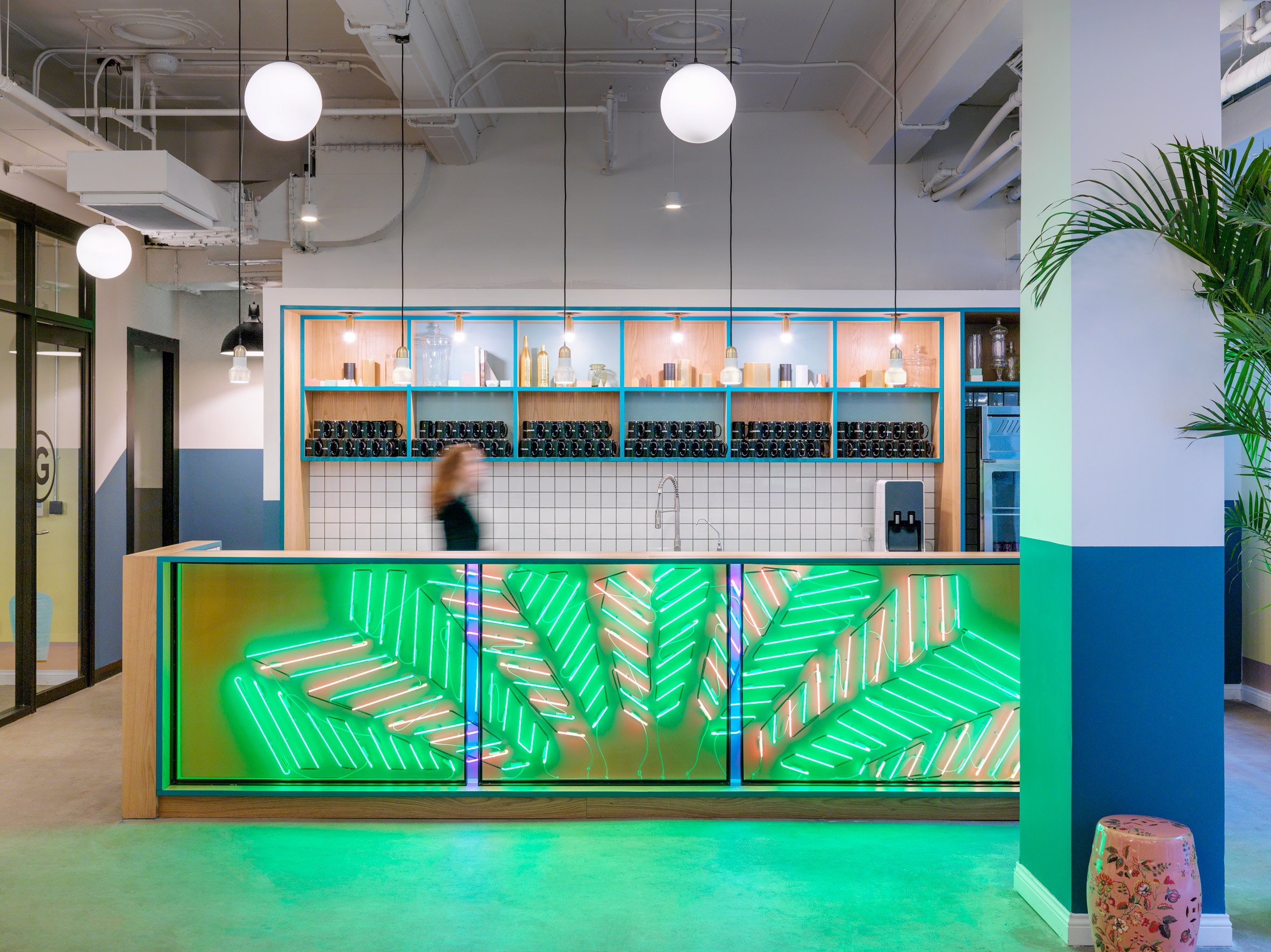 The back bar, located within the heritage building, is furnished like “tropical retro-oriental parlour”.

The gold gradient wallpaper, features hand-painted Shanghai ladies clothed in zebra attire and “adorned in gangster bling”, while a blue-and-pink neon light in the shape of a fan frames the pantry area.

Other custom wallpapers, including geometric and interweaving patterns in pastel tones hand-painted over in gold and green, continue this theme. 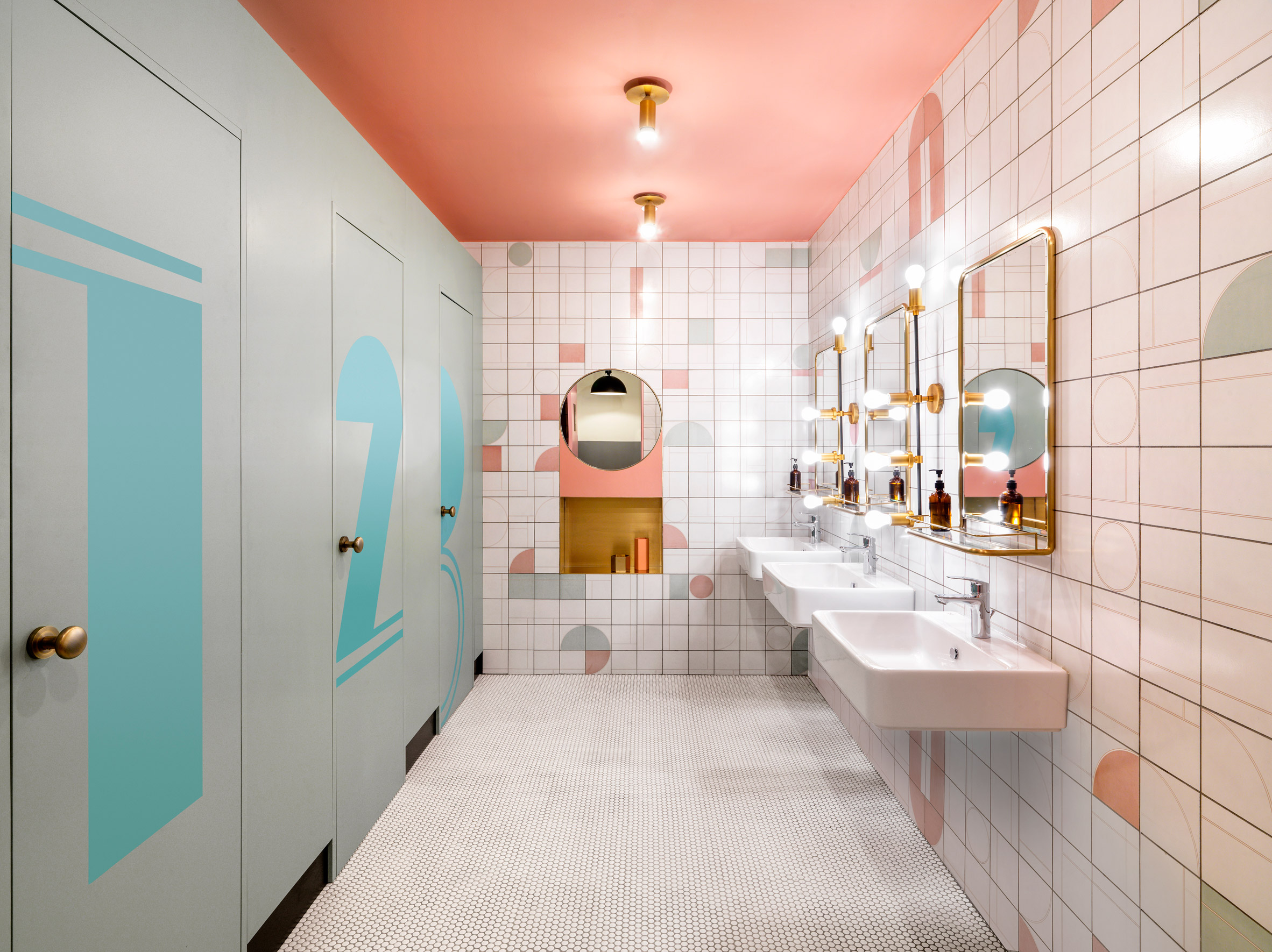 The bathroom walls are lined with custom-printed tiles, while the ceiling is painted a dusty pink.

A mint-green lacquered box contains the cubicles and the lights and mirror fixtures are made from bronze. 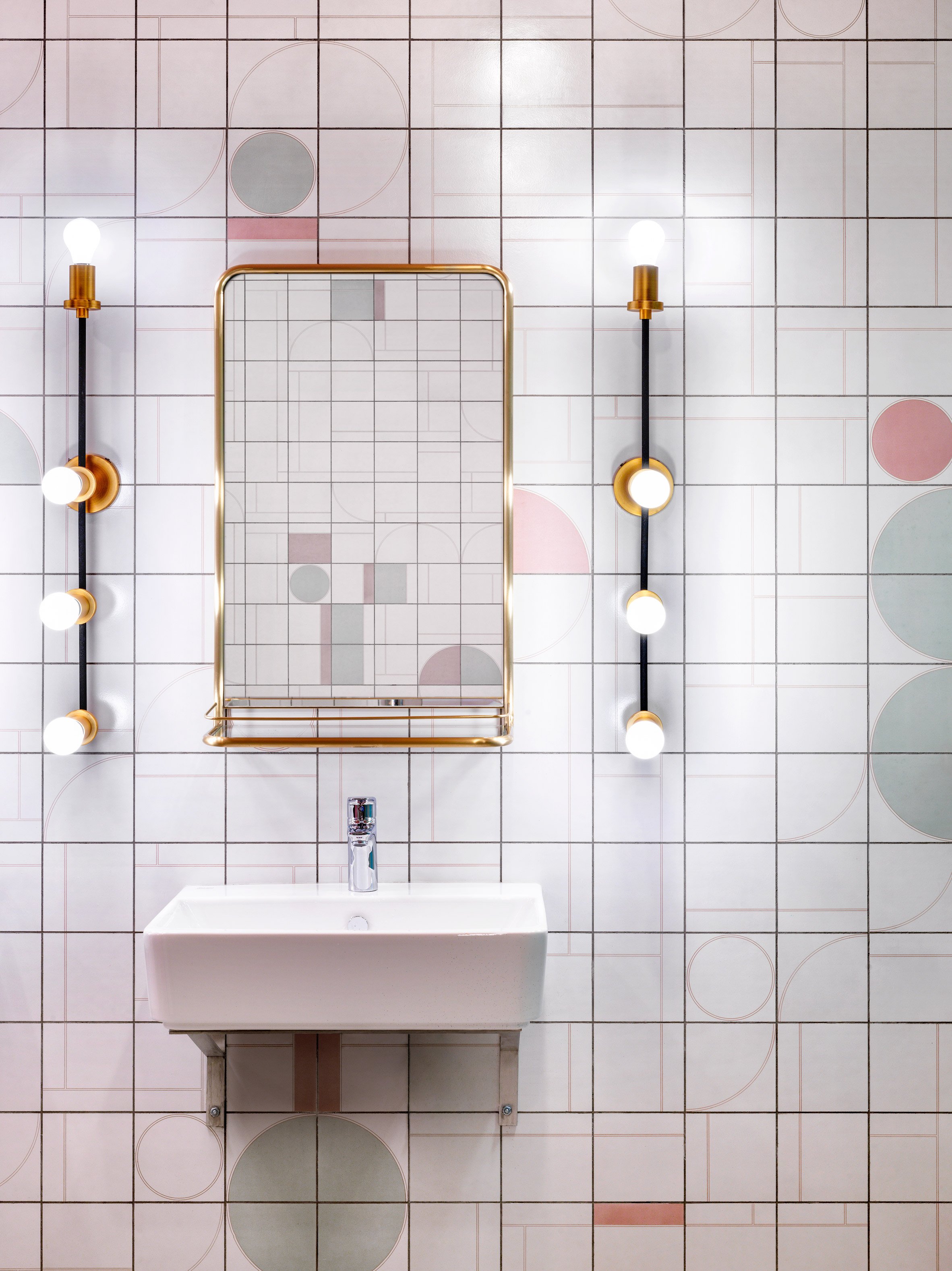 Weihai Lu forms part of WeWork’s expansion into China, which it is undertaking in partnership with Sino-Ocean Group.

The company, which also recently unveiled its first co-living apartments in New York, has three spaces in Shanghai, with a fourth in the pipeline and another two set for completion in Beijing.

WeWork’s spaces form part of the growing trend for co-working – flexible and communal workspaces – opening around the globe to cater to an increasingly self-employed workforce.

Others include a Yves Behar’s boutique Canopy in San Francisco design by Yves Behar, while Tom Dixon was involved in London’s Atrium

Photography is by Jonathan Leijonhufvud unless otherwise stated.