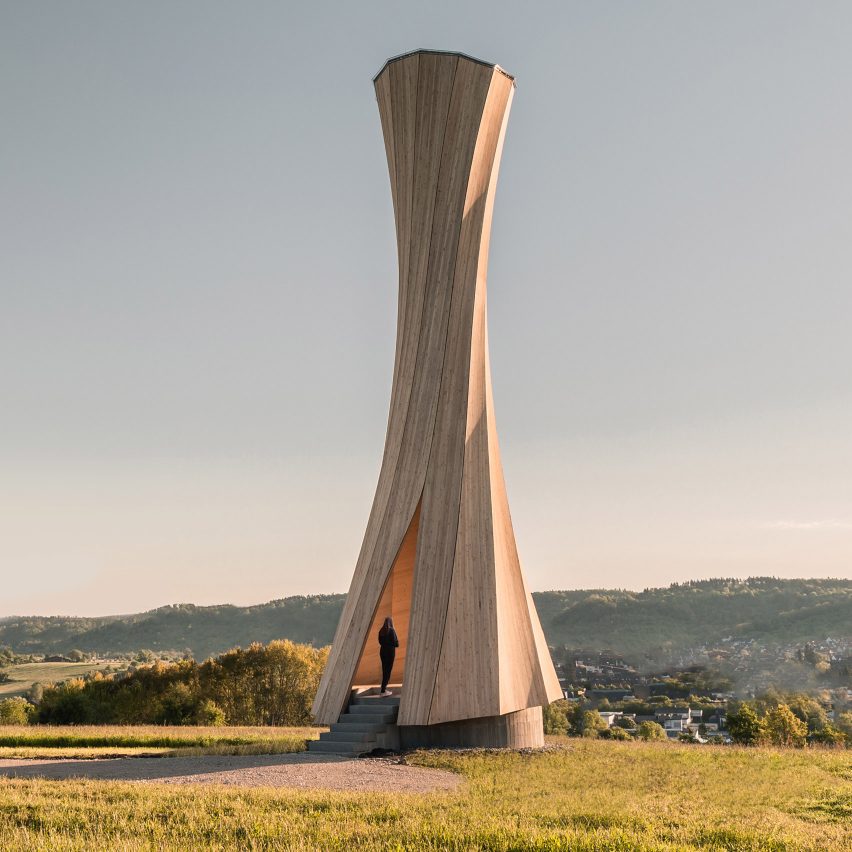 University of Stuttgart engineers have harnessed the natural shrinking process of wood as it loses moisture to create this world-first self-twisted tower in Germany.

The university’s Institute for Computational Design and Construction (ICD) and Institute for Building Structures and Structural Design (ITKE) built the Urbach Tower in the Rems Valley for the Remstal Garden Show. 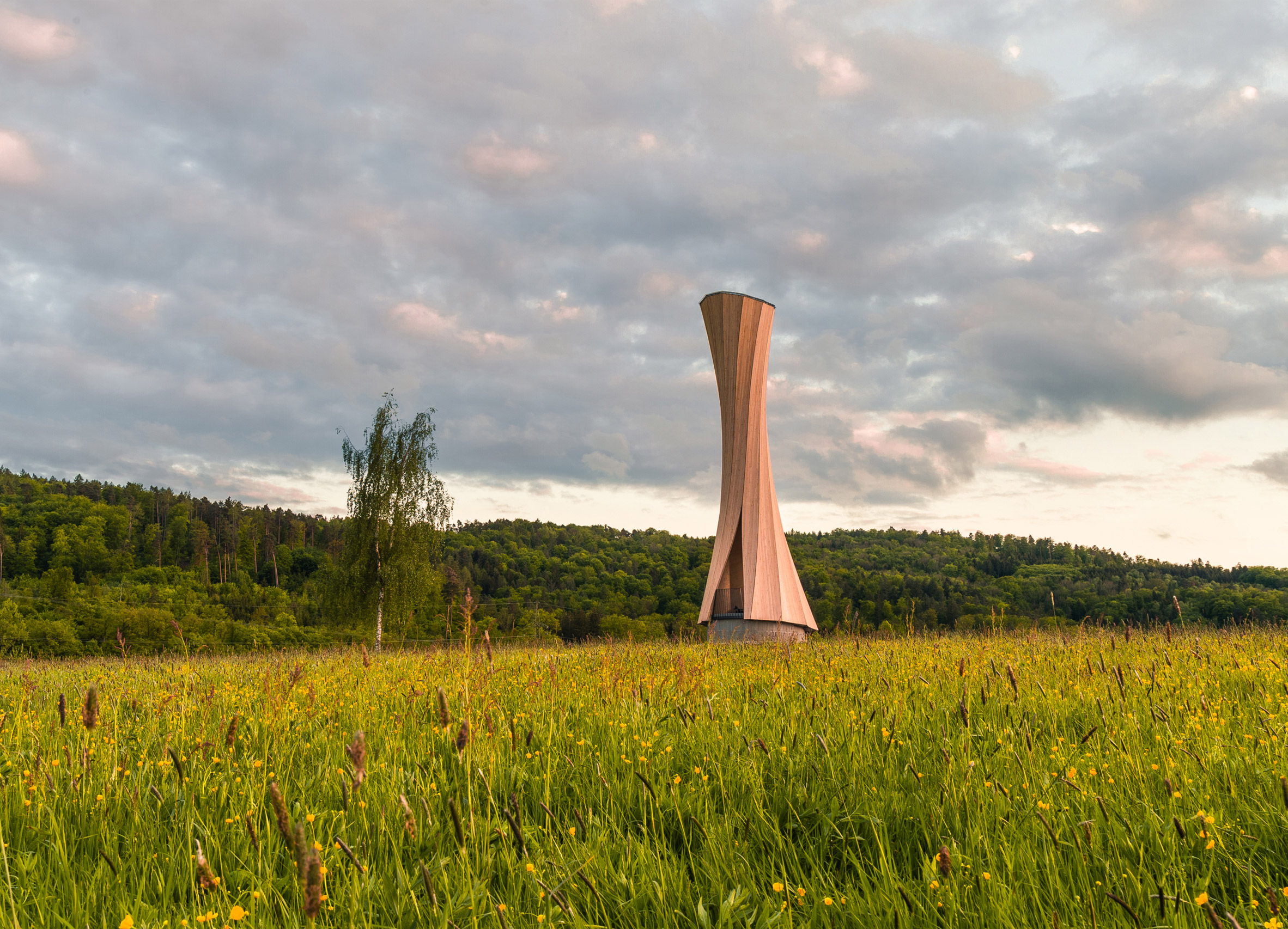 The structure is made using a new, non-energy-intensive process that involves predicting how wood will shrink as it dries out. Based on this technique, the flat timber panels are designed to warp into the desired shape.

The 14-metre-high Urbach Tower marks the first time that this process has been used in the construction of a building. 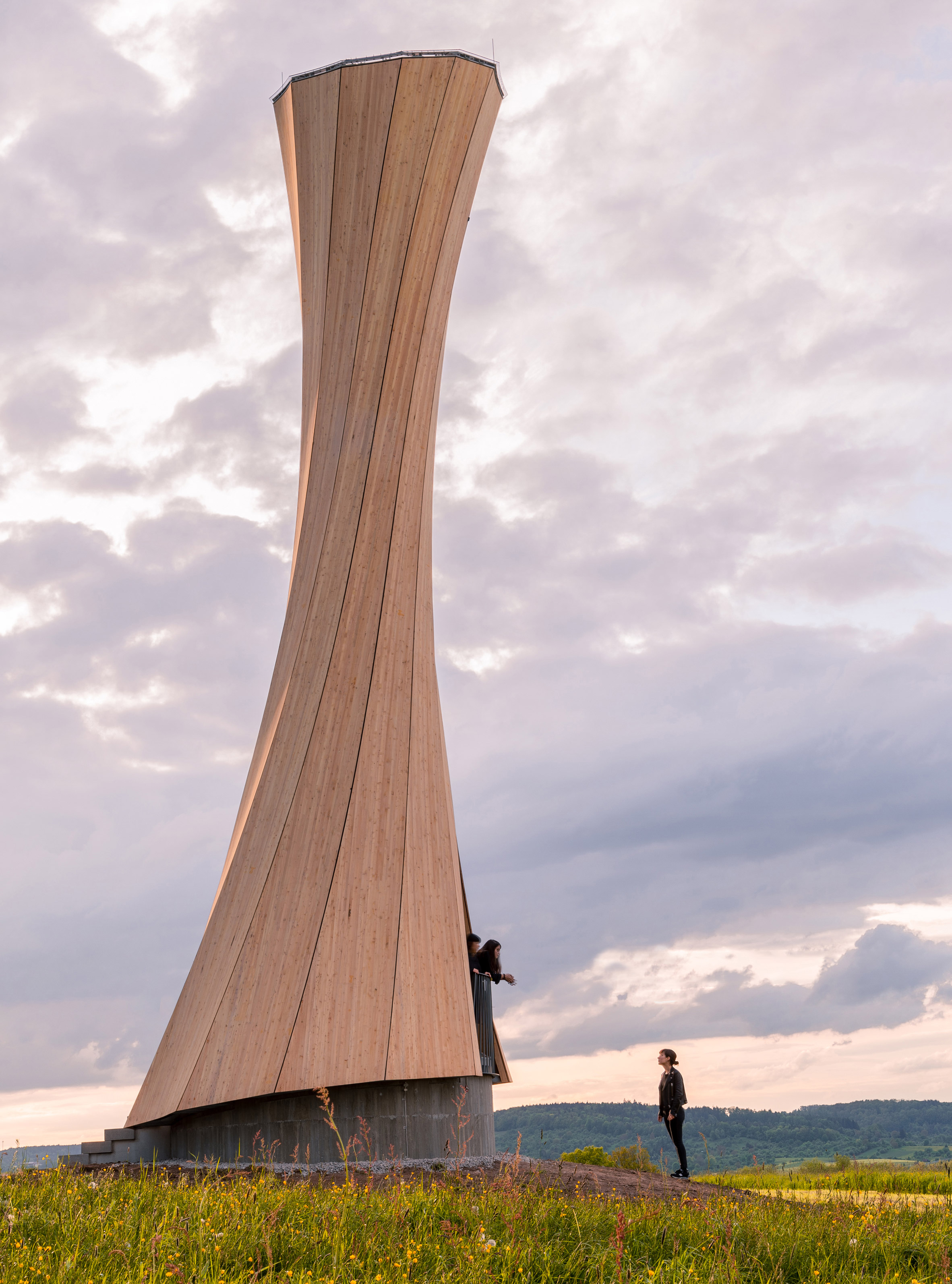 The ICD and ITKE describe the method as a way of “programming” wood to take on a specific shape, and say that the timber is in effect “self-shaping”.

“While making this work is relatively simple, predicting the outcome is the real challenge,” said ICD head Achim Menges. “Being able to do so opens up many new architectural possibilities.” 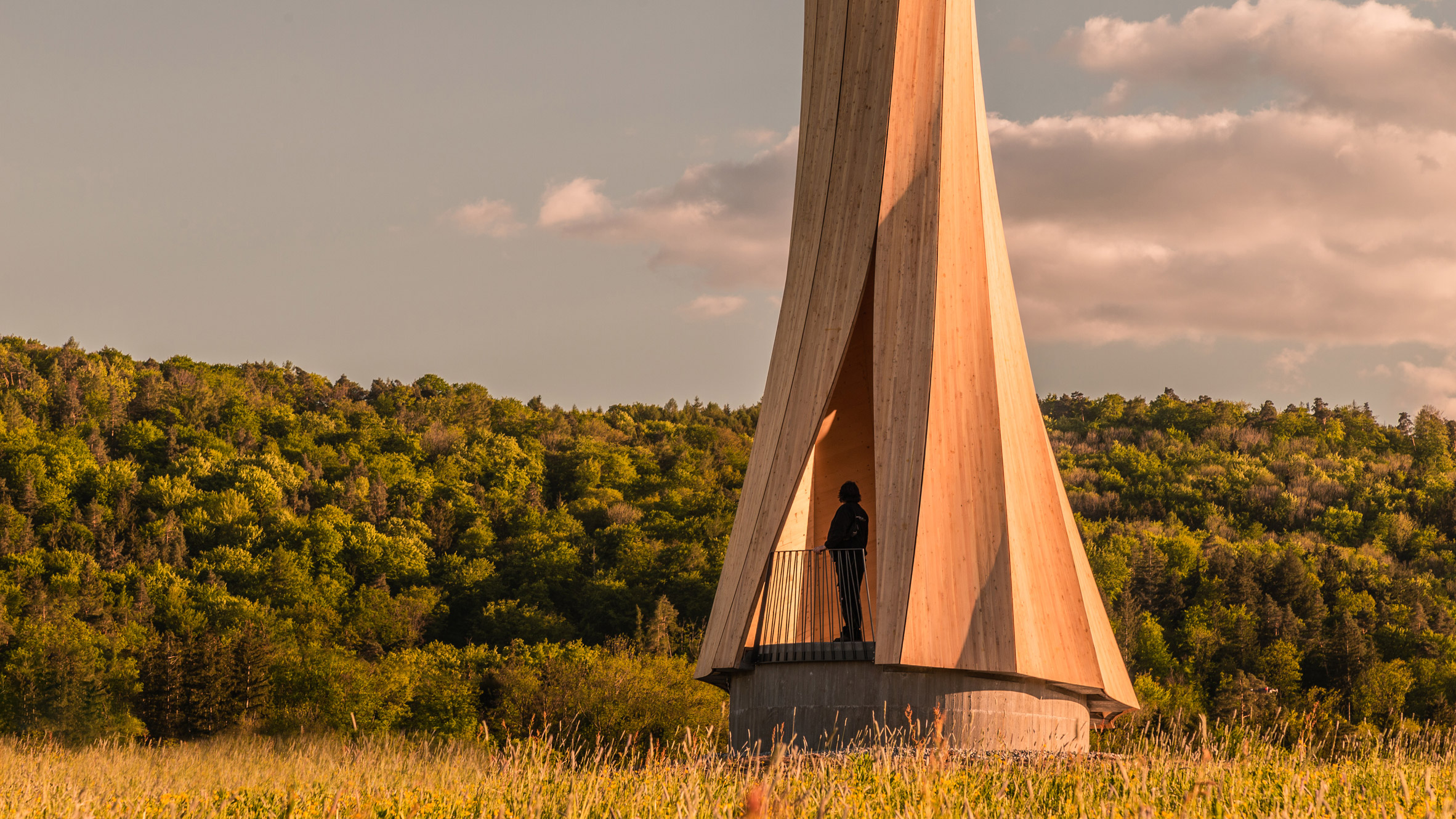 A key advantage of self-shaping is that it requires little energy, avoiding the need for the kind of heavy machinery that would usually form these kinds of timber components.

“Computational design and simulation enables us to work with the material and to unfold specific form from it, rather than forcing it into shape,” continued Menges. 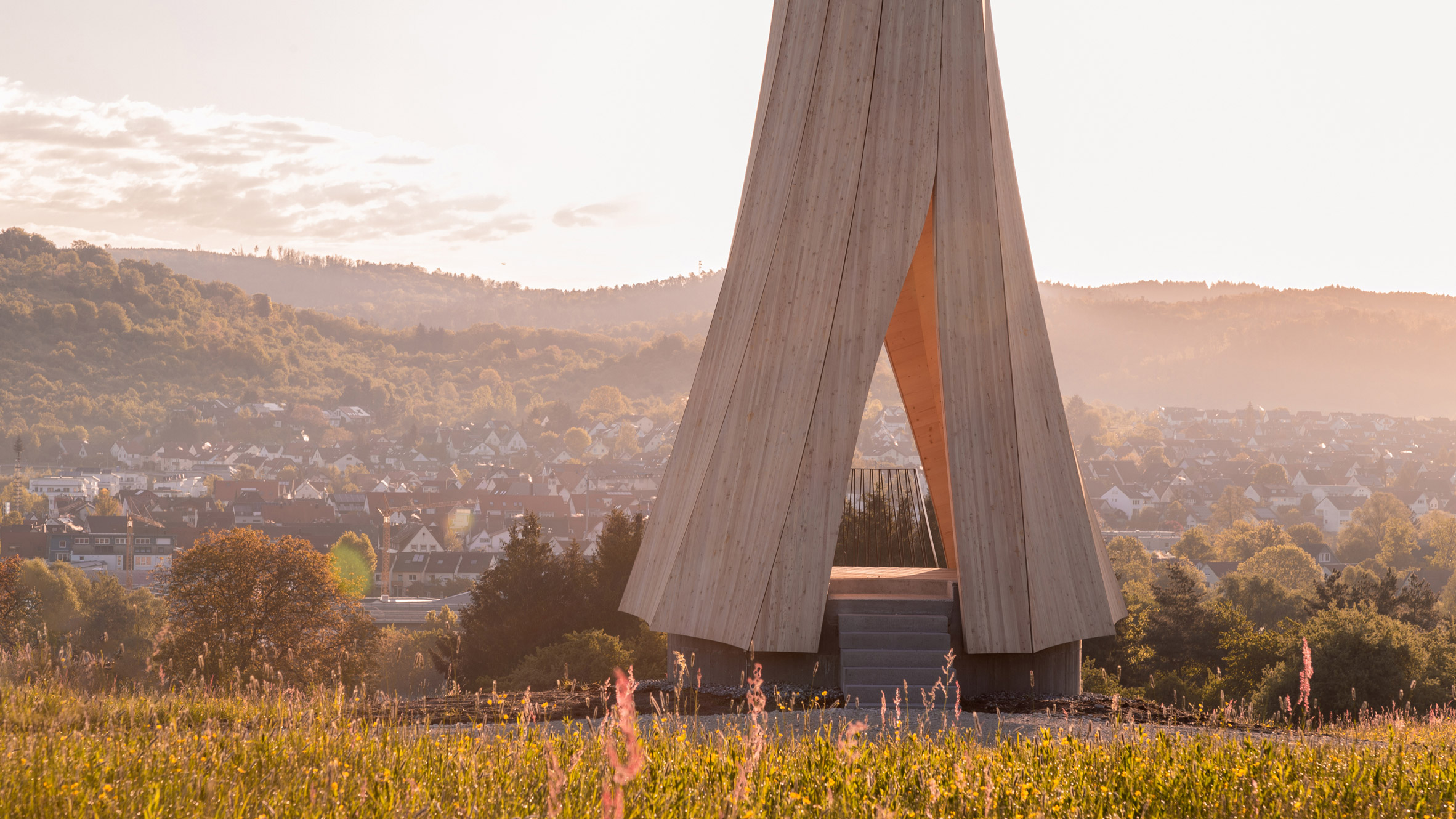 The process starts with 5-by-1.2-metre panels of cross-laminated timber (CLT) made of bilayered spruce wood sourced from Switzerland.

The panels were manufactured flat and with a high wood-moisture content of 22 per cent. Engineers control the shape the timber will take when it dries by altering the panels’ specific layup.

For the Urbach Tower, they chose a curved shape. They reduced the panels’ moisture down to 12 per cent in an industrial drying chamber. After removing them, they overlapped and laminated the pieces to form the 12 larger curved strips that form the building’s structure. 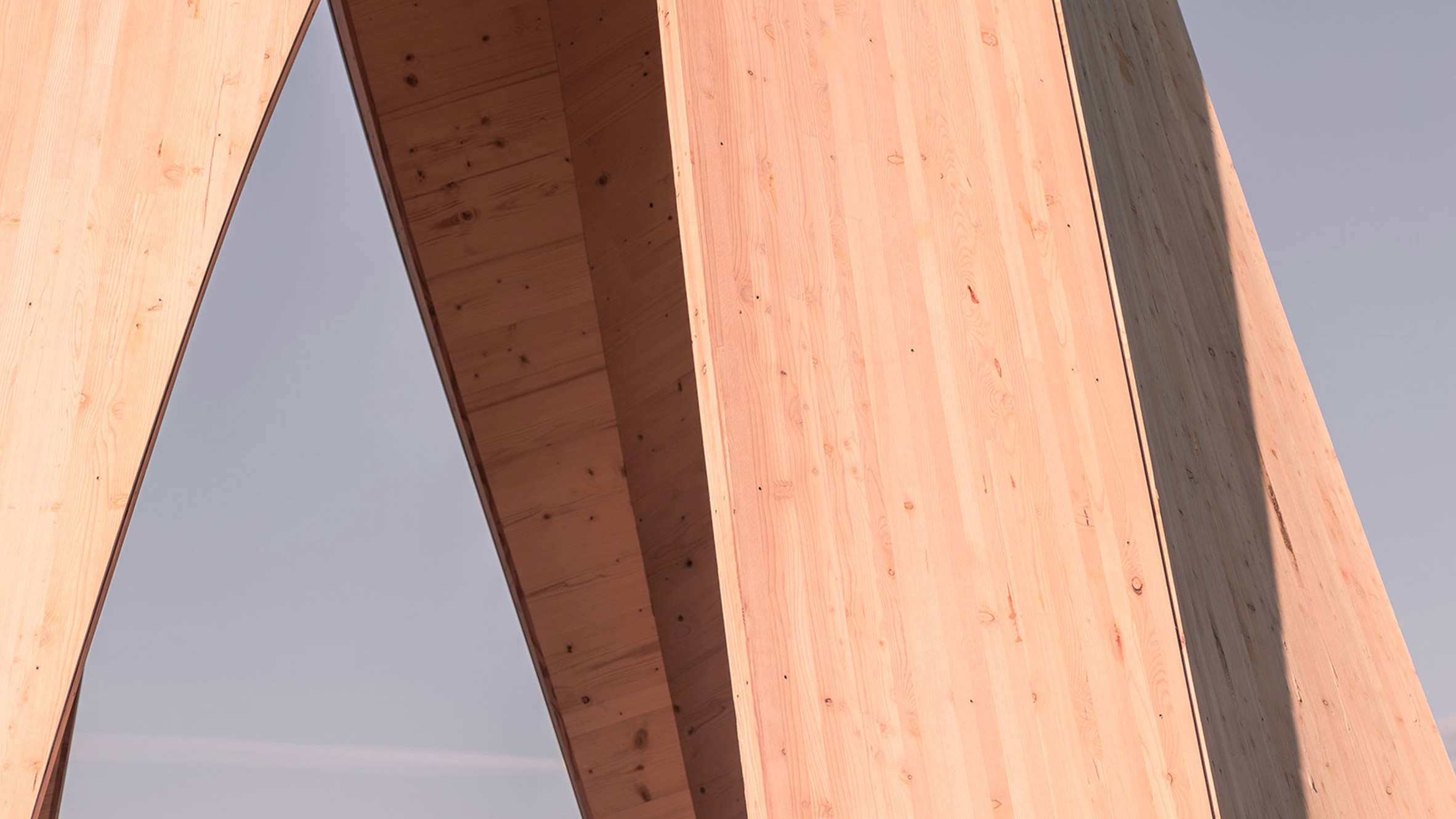 The ICD and ITKE developed their own computational mechanics models for the design in order to explore various radiuses and curvature types.

The resulting structure is light and seamless-looking, with walls that are nine centimetres thick with a weight of 38 kilograms per square metre of surface area.

“What looks simple is difficult to achieve and only possible through an ingenious interplay of form and force,” said ITKE head Jan Knippers. 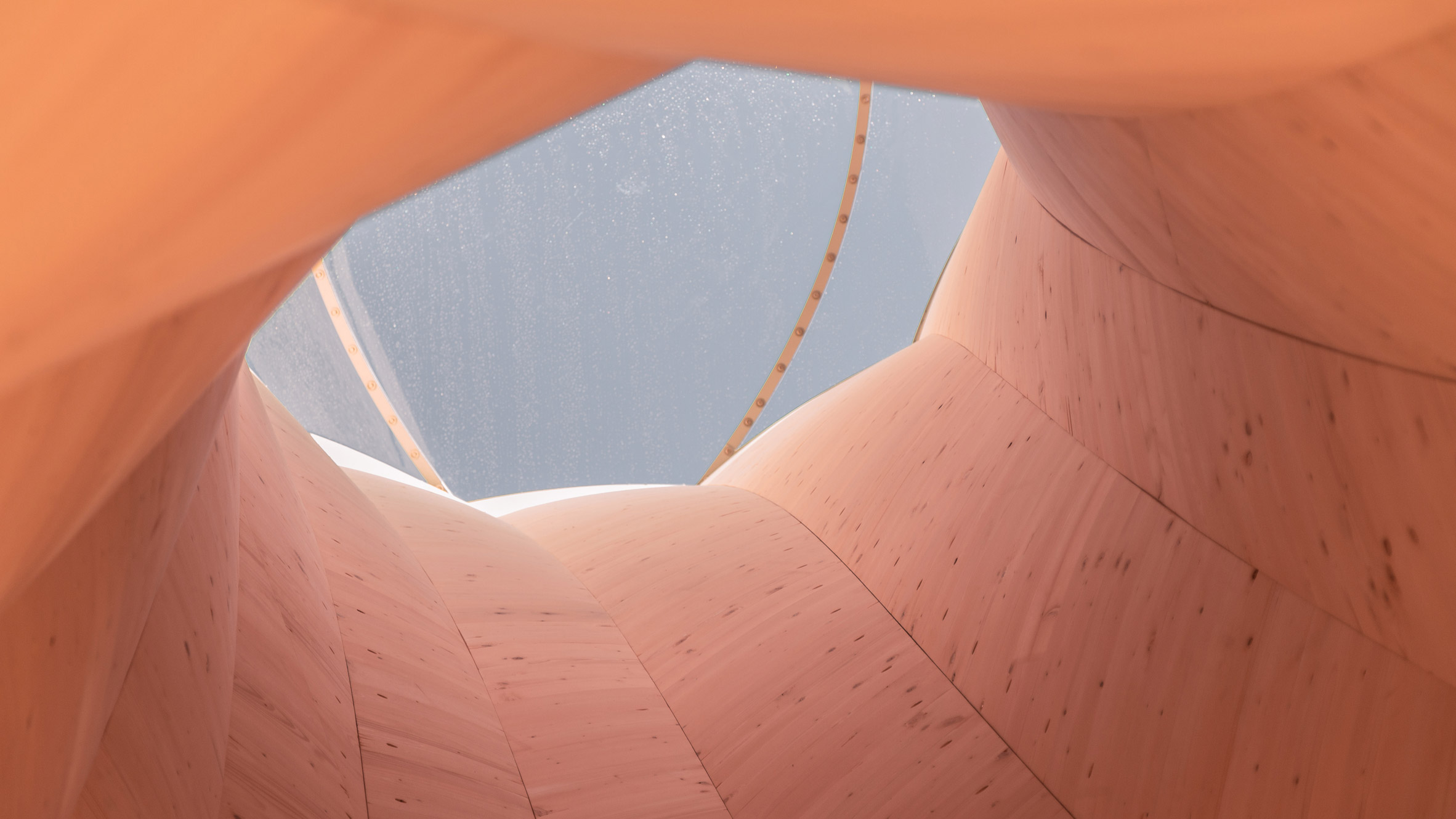 The University of Stuttgart describes the tower as having an “almost soft and textile-like” form that “opens like a curtain” onto the Rems Valley, where it is located.

The building is one of 15 permanent small buildings to be introduced into the valley for the garden show.

The buildings are meant to evoke the traditional white chapels of the region, and the University of Stuttgart’s tower – the official contribution from the City of Urbach – sits on a hillside in the valley’s centre. The tower’s spruce wood panels will lighten over time. 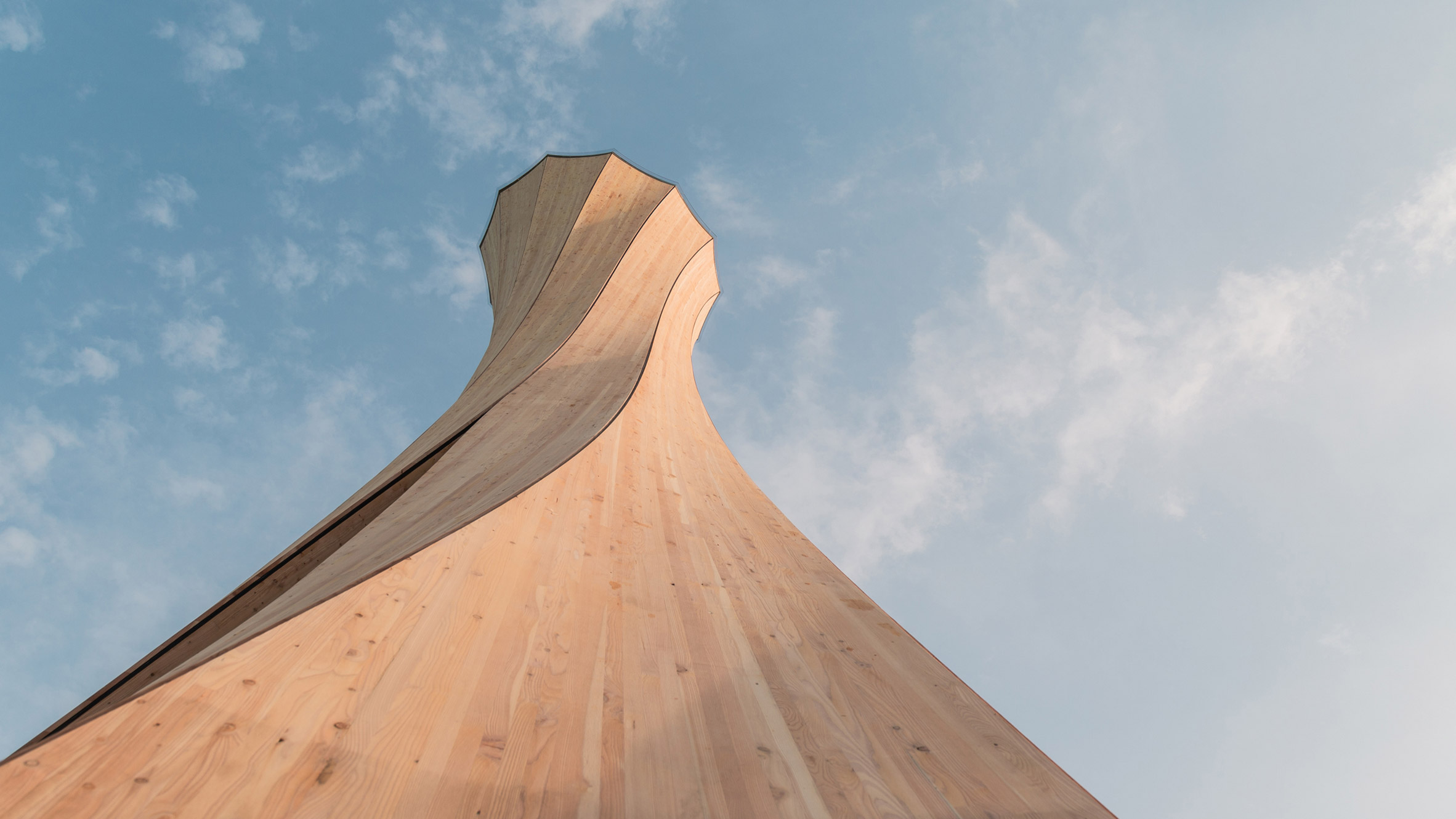 The University of Stuttgart is renowned for its research into new materials and construction methods.

Among recent projects from the ICD and ITKE are the BUGA pavilions based on beetle wings and sea urchins at the Bundesgartenschau horticultural show, and the ICD Aggregate Pavilion made from over 120,000 recycled plastic spiked stars bonded only by friction.