Johannes Torpe Studio has installed bright white surfaces and grid-like display areas inside this bike store near Copenhagen, to emulate the aesthetic of a “futuristic lab”. 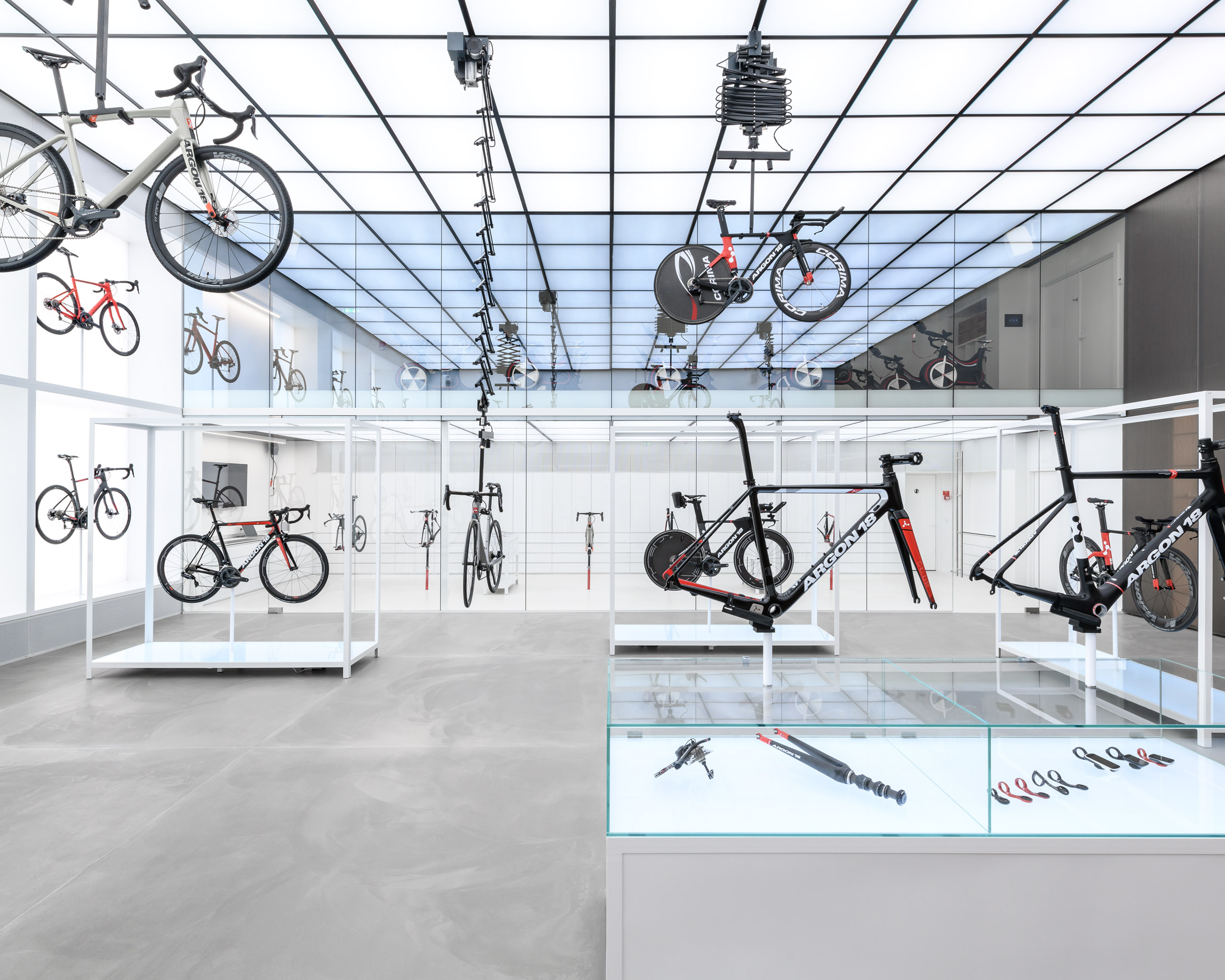 The store is located in the small town of Lynge, in Denmark, in a building that since the 1990s has been exclusively used as a storage facility by United Cycling, a distributor of high-performance bicycles to advanced cyclists and athletes.

Keen to expand the business, United Cycling approached Copenhagen-based Johannes Torpe Studio to turn the 1,650 square-metre building into a retail space and headquarters for the brand.

The interiors now play host to a product showroom, workshop, and a bike-fitting area for customers, as well as a number of meeting rooms and a canteen for staff. 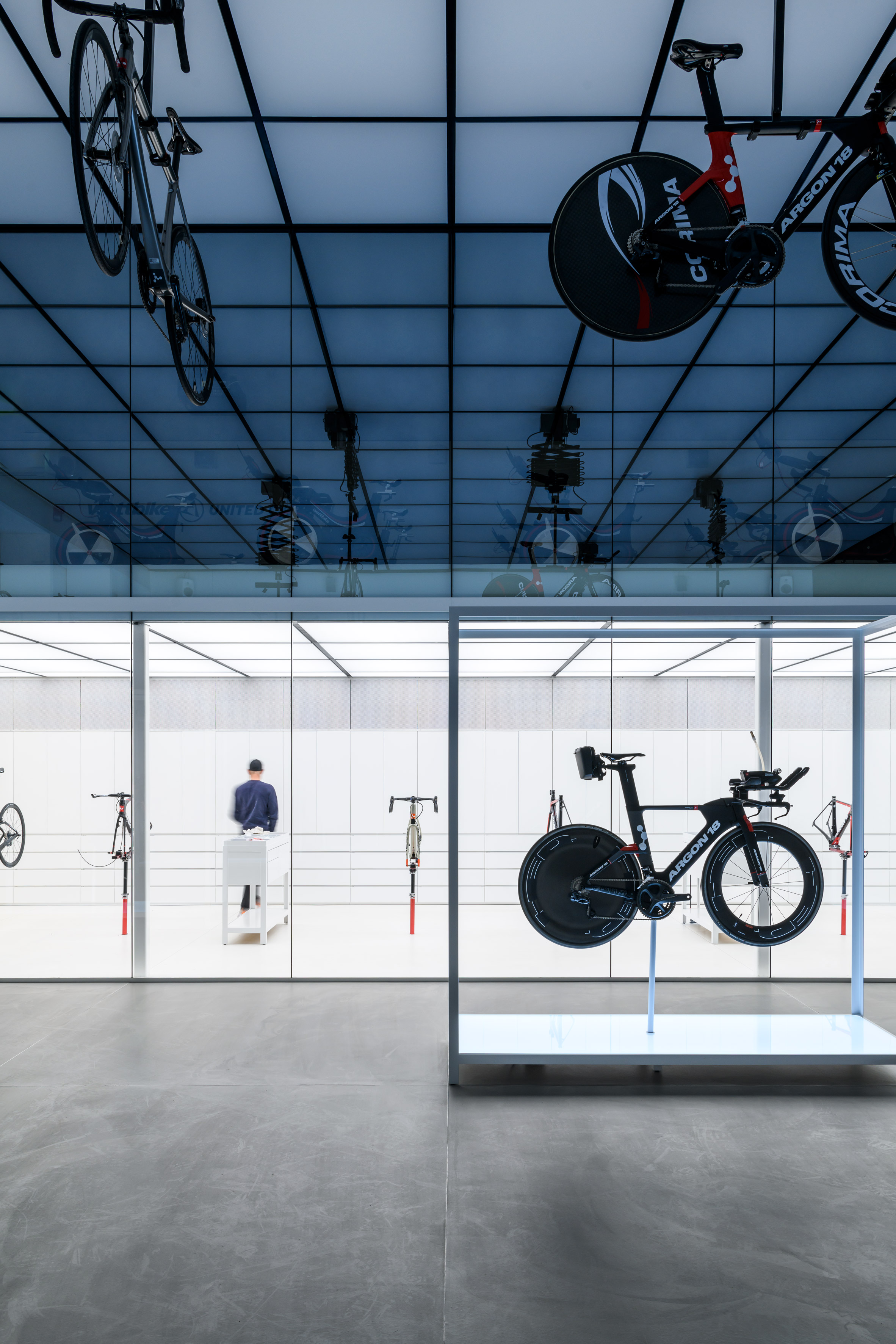 When it came to designing the main showroom, the studio wanted to encourage customers to “inspect, touch and admire the bicycles for their technical superiority”.

It was decided to divide one of the six-metre-high walls into eight large display boxes, which have then been back-lit to draw further attention to the products.

The strict gridded formation – along with the grid pattern that covers the ceiling – is intended to reflect the meticulous construction process required to make specialised bicycles.

“The result is a clinical and futuristic lab – a toy store for the passionate and serious rider. We call it a modern monastery for the science of cycling,” explained Johannes Torpe Studio. 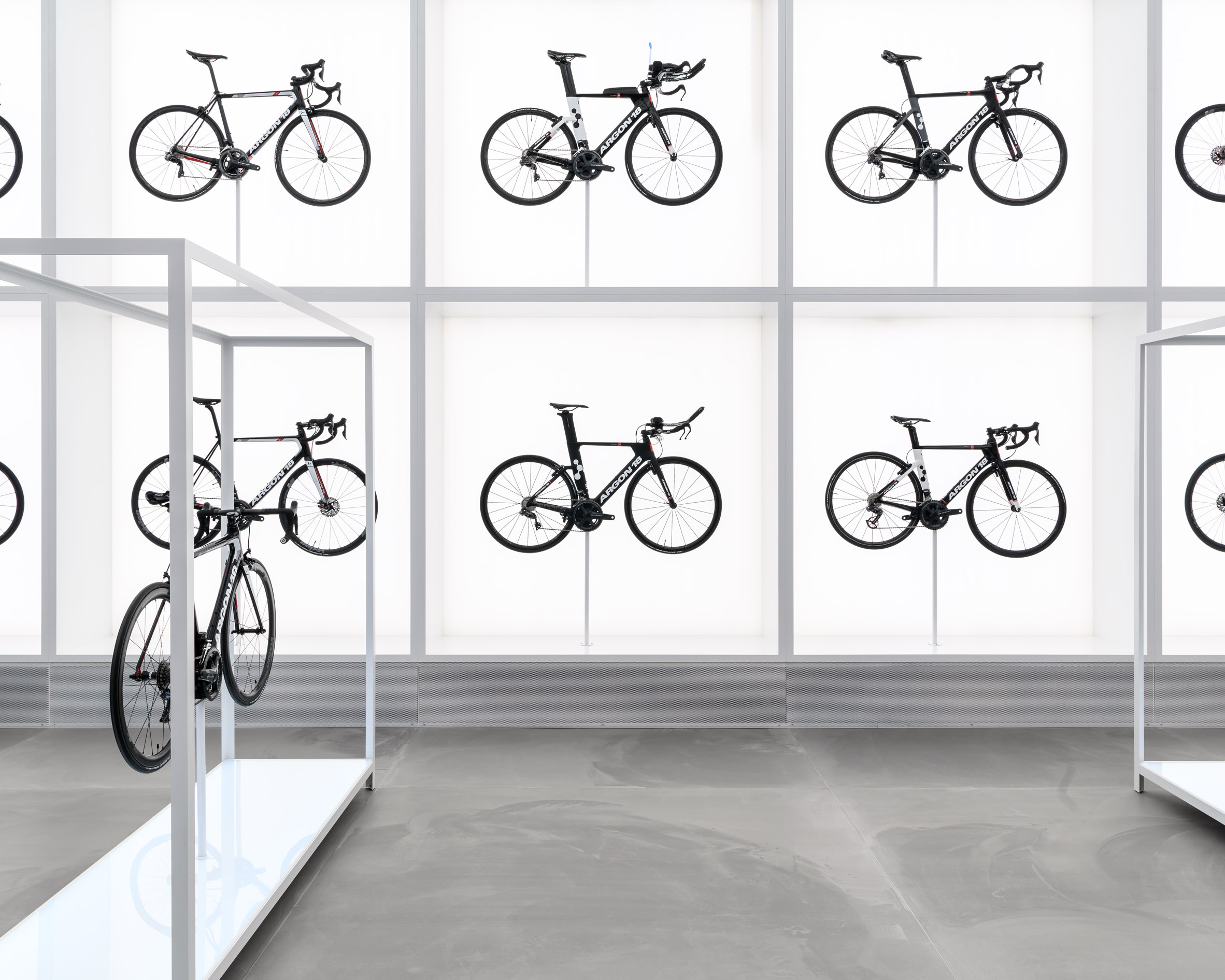 Several other bikes are shown at floor level inside white square frames, while five models are suspended from the ceiling on mechanical hoists that can be lowered at the press of a button should customers want to take a closer look.

The fit-out of the space has otherwise been kept simple with concrete flooring and timber wall panelling. Alterations have also been made to the building’s exterior facade, which is now partially screened by perforated panels of white aluminium. 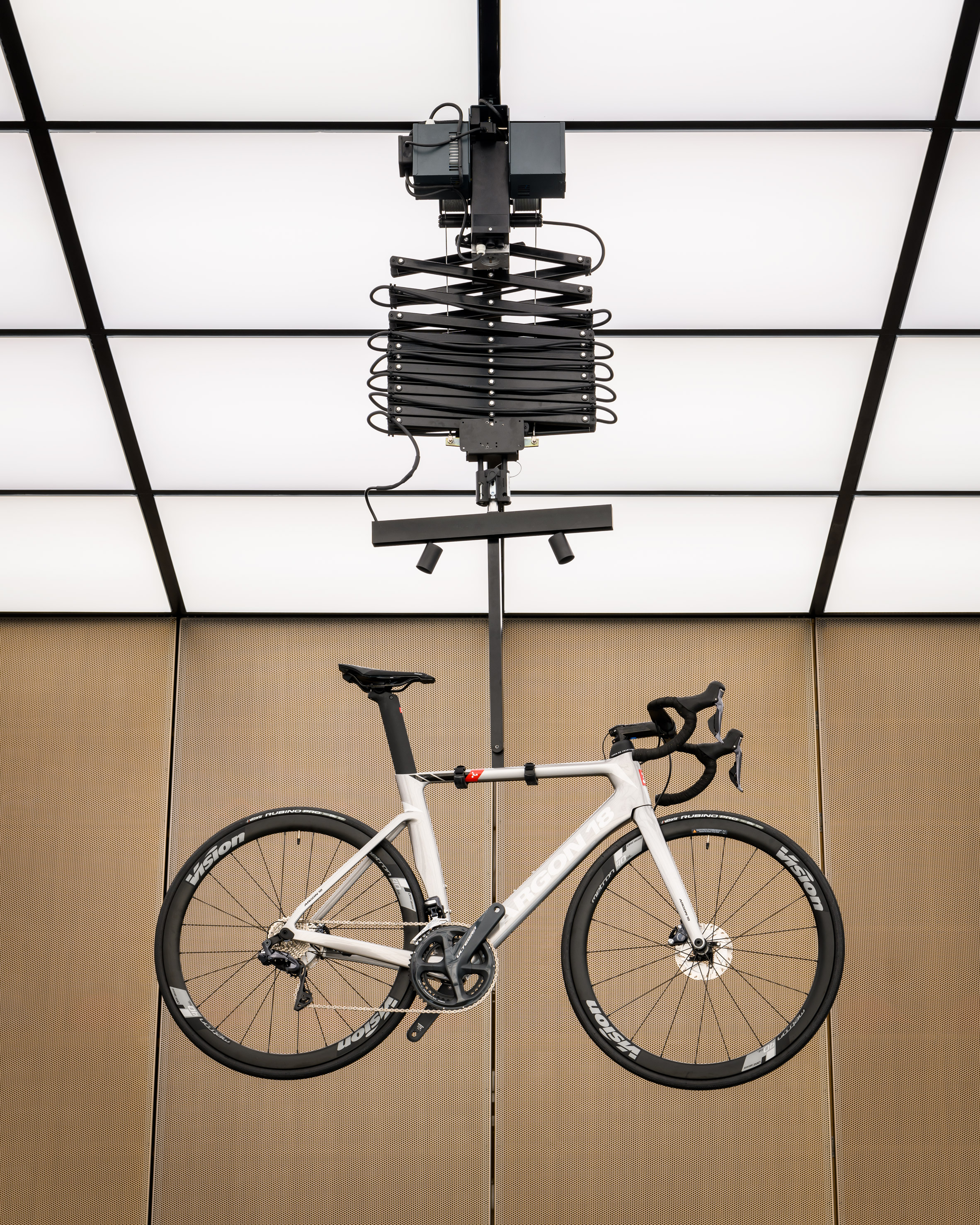 “The design concept circles around the contrasts between nature and science and the meeting between man and machine,” the studio added.

“This theme is particularly noticeable in the material choice were warm natural materials such as oak meet the cold industrial feeling of the floors.” 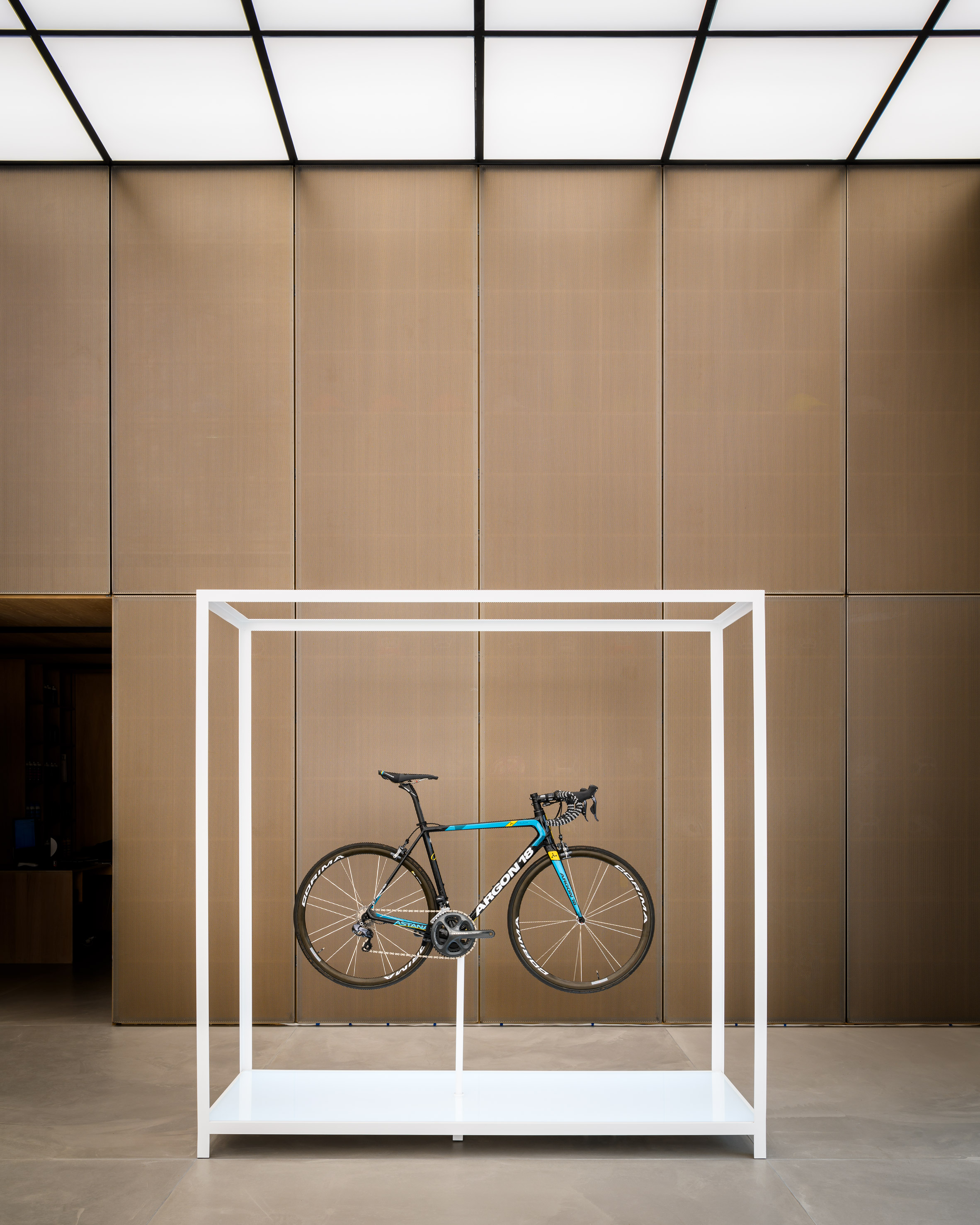 Last year the world’s largest bicycle parking garage opened in the Netherlands, which will eventually be able to accommodate up to 12,500 bikes. Situated underneath Utrecht’s Station Square, the space also features a service point where riders can go for repairs, maintenance, parts and accessories.

Photography is by Alastair Philip Wiper.