By bringing together commerce and ornament, the now-defunct Foreign Office Architects has produced a shopping centre that looks like a giant black slug, says Owen Hatherley in his latest Opinion column.

You remember Foreign Office Architects. The London-based firm was dissolved five years ago with the split of its main partners, Farshid Moussavi and Alejandro Zaera-Polo, but their work has fallen out of favour. What they promised – in buildings that ranged from schools and port terminals, to railway stations and shopping malls – was an architecture that would get fully stuck into the processes, however messy and unpleasant, of the contemporary capitalist world. And they promised to animate them in a dramatic and vivid way – something hard to now imagine, in a London dominated by rampant overdevelopment dressed in polite brick facades.

I recently visited for the first time one of the last results of FOA’s supermodernist project: Watermark Westquay in Southampton, a port on the south coast of England. Looking at this three-dimensional food court in the shape of a giant black slug about to mount the city’s 14th-century defensive walls, it’s hard to believe this is a product of one of the most admired creative partnerships of the last two decades, the fruit of an intense group of transnational theorists and architects at elite architecture schools. But it is.

What made FOA notable was partly the internationalism of this group of Architectural Association-trained designers – reflected in the droll choice of name. But also their embrace of two things that architects affect to be nervous about: commerce and ornament.

Foreign Office Architects promised an architecture that would get fully stuck into the processes, however messy and unpleasant, of the contemporary capitalist world

The word “commercial” is still often used as an insult in architecture. But as Douglas Spencer points out in his recent book The Architecture of Neoliberalism, Zaera-Polo was one of many designers to develop the sort of high theory popular at the AA into an acceptance of the world as it is – from Deleuze and Guattari’s love of flows and folds into a design that aimed to be as weightless and vertiginous as financial capitalism – and explicitly disdained any attempt to imagine a different or better world.

And whereas architects frequently pretend that brick slips or diagrids are somehow structural, Moussavi’s The Function of Ornament made a densely theoretical argument for decoration.

But what made FOA particularly unusual is they were picked up by commercial developers, to a much greater degree than contemporaries like Zaha Hadid Architects or OMA, and especially in the UK. Their work can be found in provincial cities as well as the capital, which is still, in this centralised country, where most “high” architecture gets realised. FOA got their hands dirty on plans and projects in Birmingham, Southampton, Leicester, Leeds. The results can be politely described as mixed.

The most successful is probably the John Lewis store, built as part of Leicester’s Highcross mall. This is an honest essay in facadism. Moussavi’s theorising was realised in the creation of a filigree frosted glass envelope for a big box, connected to the banal main complex by a florid glass walkway, and a multiplex cinema clad in a “dazzling” mirrored screen.

What made FOA notable was their embrace of two things that architects affect to be nervous about: commerce and ornament

The redesign of Birmingham New Street station, finished by Zaera-Polo’s firm post-FOA, has already been subject to widespread criticism for the massive liberties taken by the contractors who completed the building, with materials vastly cheaper than those originally specified, and screens that were planned to be timetables for trains turned into giant adverts. The meeting of the London avant-garde and these everyday functions proved to be as tense as you’d expect, with every idea being watered down, and design unashamedly treated like a bauble on top of a ruthless maximisation of lettable space and a brutal engineering of “value”.

Watermark Westquay has had a difficult gestation. FOA was commissioned 10 years ago by the mall developers Hammerson to design a mixed-use retail-residential-leisure complex on the edge of WestQuay, a vast mall of the late 1990s. The original scheme won planning permission but was stalled for around seven years by the recession. What is there now derives from a significant redesign by ACME, founded by Friedrich Ludewig, who was a lead architect on FOA’s malls in Leicester and Istanbul.

ACME dropped the retail element and redesigned the scheme in certain key ways – its main volume, containing a cinema, has morphed from a rectilinear series of blocks to one curvaceous shape. But the basic components are retained from the earlier scheme. 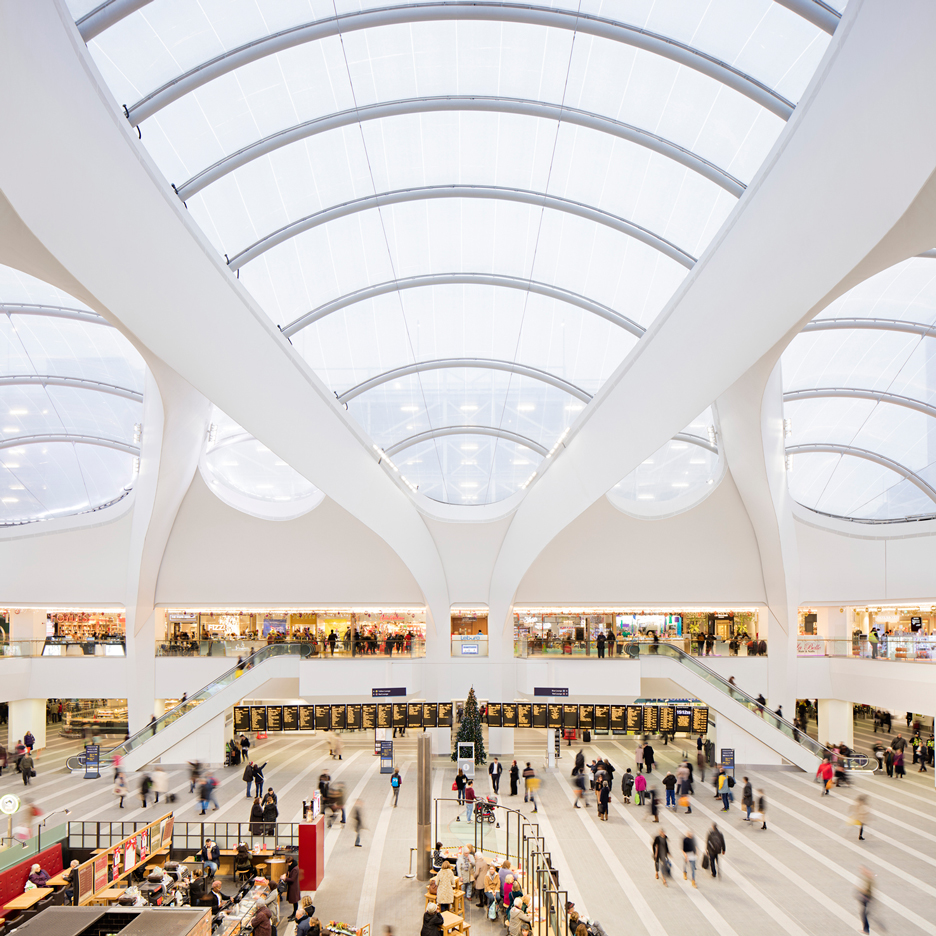 The biggest obstacle to any civic quality the building might have is the earlier mall it is attached to. WestQuay – designed by BDP, although when I put this to the firm’s chairman, he embarrassedly told me “ah, we took it over from Chapman Taylor” – is one of the most devastating urban mistakes in any British city. Galumphing appallingly across a quarter of the city centre, from a 1950s plaza to a disused industrial estate via the city walls, without ever acquiring a coherent idea or an identifiable visual presence, it would make almost anything look good by comparison.

Watermark’s response to this insular and incoherent postmodernist megastructure is to create a pedestrian walkway facing the walls, with a circus-like stepped area between the two. It does at least give the space back to the public, in some degree, although it has the presumably unintended effect of making the walls look tiny and toy-like.

Yet the main problem is what it is. In a city suffering from a severe “clone town” problem, with no less than seven indoor malls already, it adds yet another, albeit slightly more outwards facing. Its juxtaposition with what is unique in Southampton – the second-most complete medieval defensive complex in any British city – is bathetic. This is partly due to contingent things (if you’ve ever wanted to fire a crossbow at a branch of Zizzi, this is the place to do it) and partly due to the lack of integrity in the design.

In a city suffering from a severe “clone town” problem, with no less than seven indoor malls already, Watermark Westquay adds yet another

Several months after its opening, parts were already hanging off – I watched workers try and stitch the wire-mesh-like structure back together in order to create the vaguely op-art effect intended to screen the black volume of the near-windowless cinema and provide what the city council calls the “wow factor”.

On the other side of the walls is Eric Lyons’ Castle House, a 1960s tower block that outclasses Watermark in every respect, although it has had considerably less money spent on it, and is disfigured by cheap recent additions. Its vigorous concrete structure enhances the rugged townscape, rather than diminishing it.

Still, there’s an important lesson in all this, as applicable to brick classicists as to AA futurists’ interrupted dialogue with the shopping mall. And that is: if you’re going to swim with the tide, there’s no point in complaining when it takes you where it wants to go.

Owen Hatherley is a critic and author, focusing on architecture, politics and culture. His books include Militant Modernism (2009), A Guide to the New Ruins of Great Britain (2010), A New Kind of Bleak: Journeys Through Urban Britain (2012) and The Ministry of Nostalgia (2016).

The post “Hard to believe this is a product of one of the most admired creative partnerships of the last two decades” appeared first on Dezeen.