Robots were used to manufacture the components of these two pavilions, which form the new shop for the V&A museum in London.

Designed by London studio Friend & Company, the shop is intended to pay tribute to the V&A‘s first retail space, which functioned as a showcase for contemporary crafts from 1863 onward. 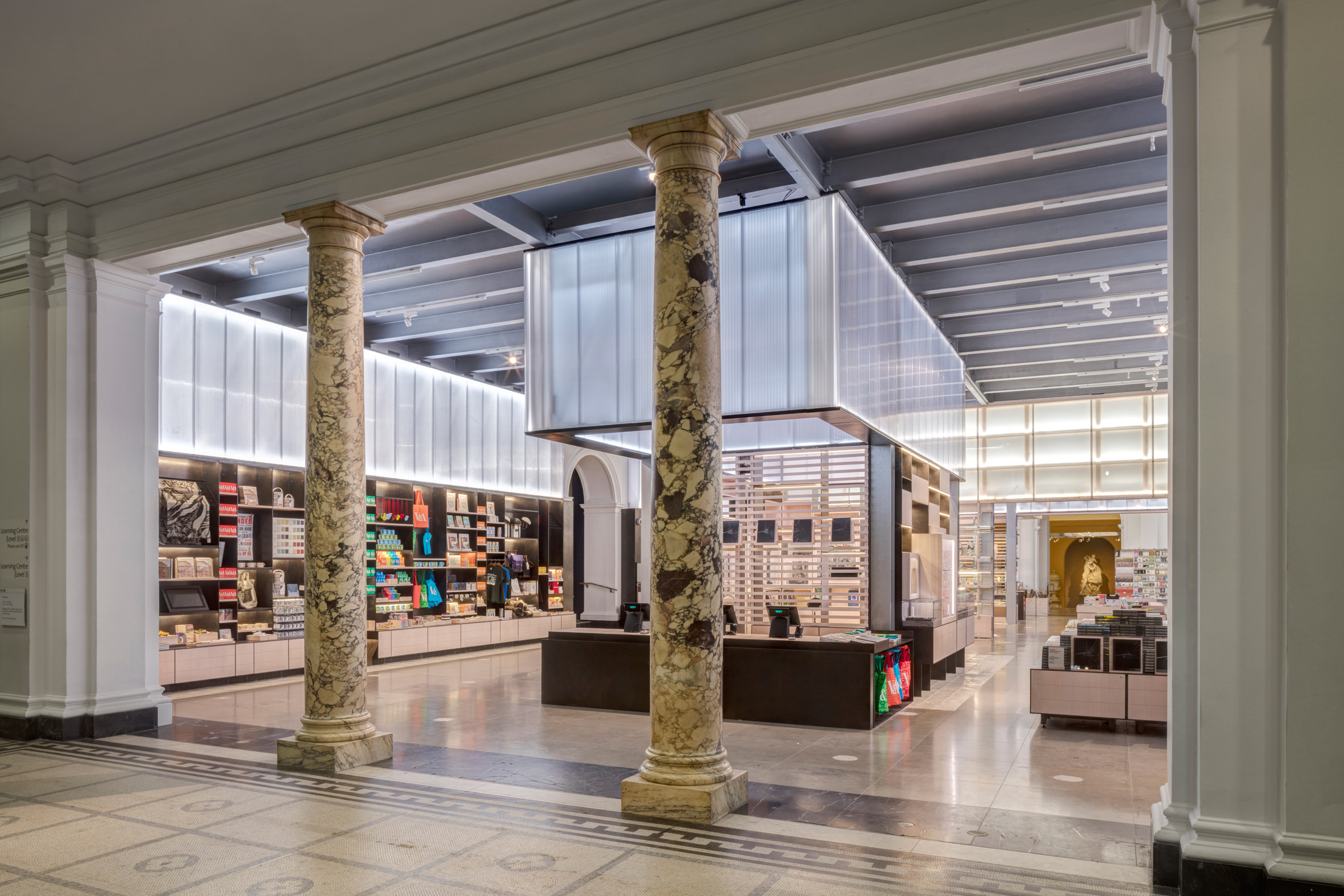 This new space was constructed using a variety of digital fabrication techniques, including 3D-printed ceramics, laser cutting, CNC routing and water-jet cutting. The design team refer to these processes as “robotic craft”. 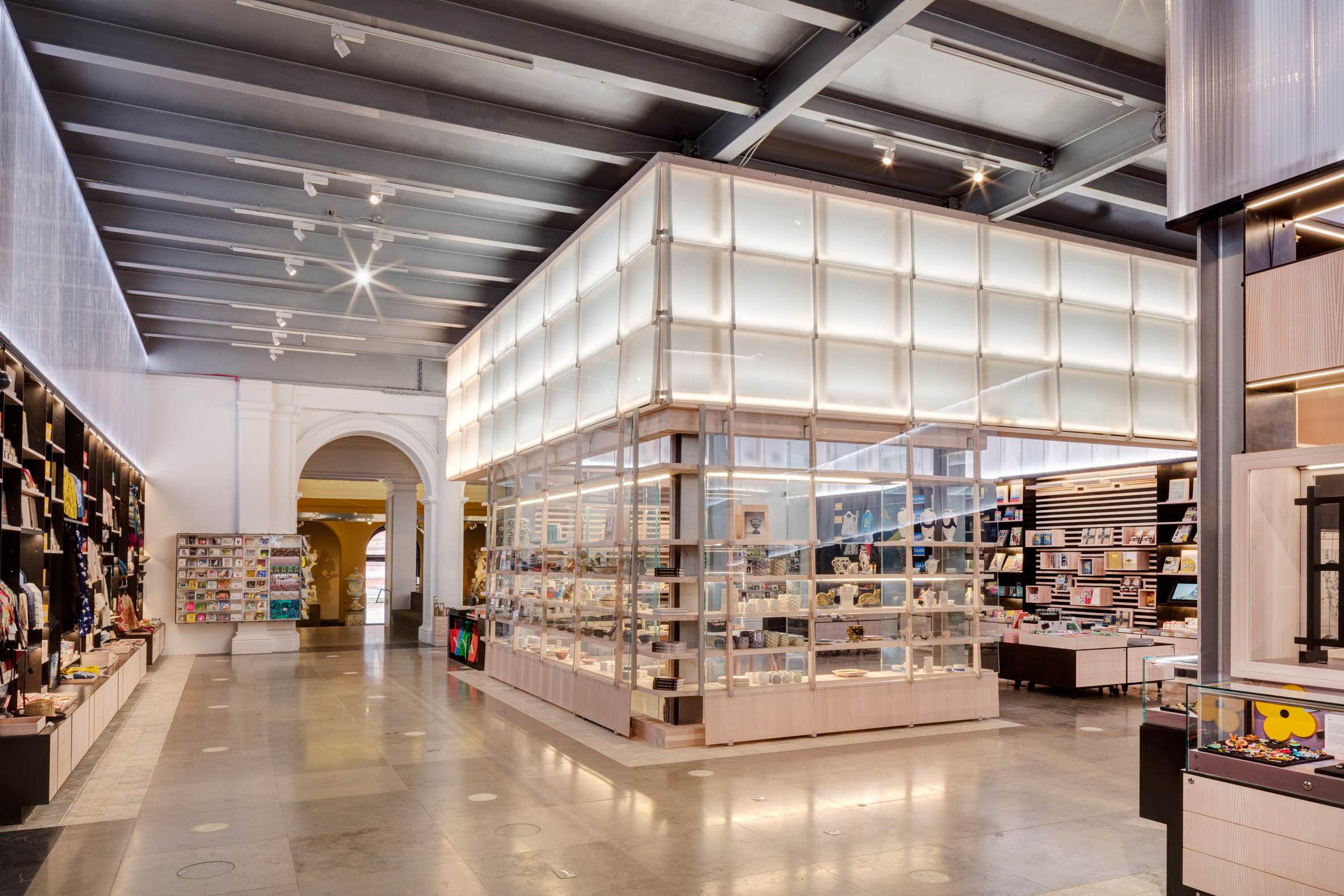 “The shop design was inspired by our fascination with digital craft processes and is now as much a showcase of latest building technologies as it is a new space to display new designers’ work and additions to the shop collection,” said architect Adrian Friend.

“We are fascinated with how architecture is made and through our work try to take control of the socio-economic tools of production to push the envelope of possibilities through owning, influencing and ultimately showcasing in the final design the industrial processes of manufacturing.” 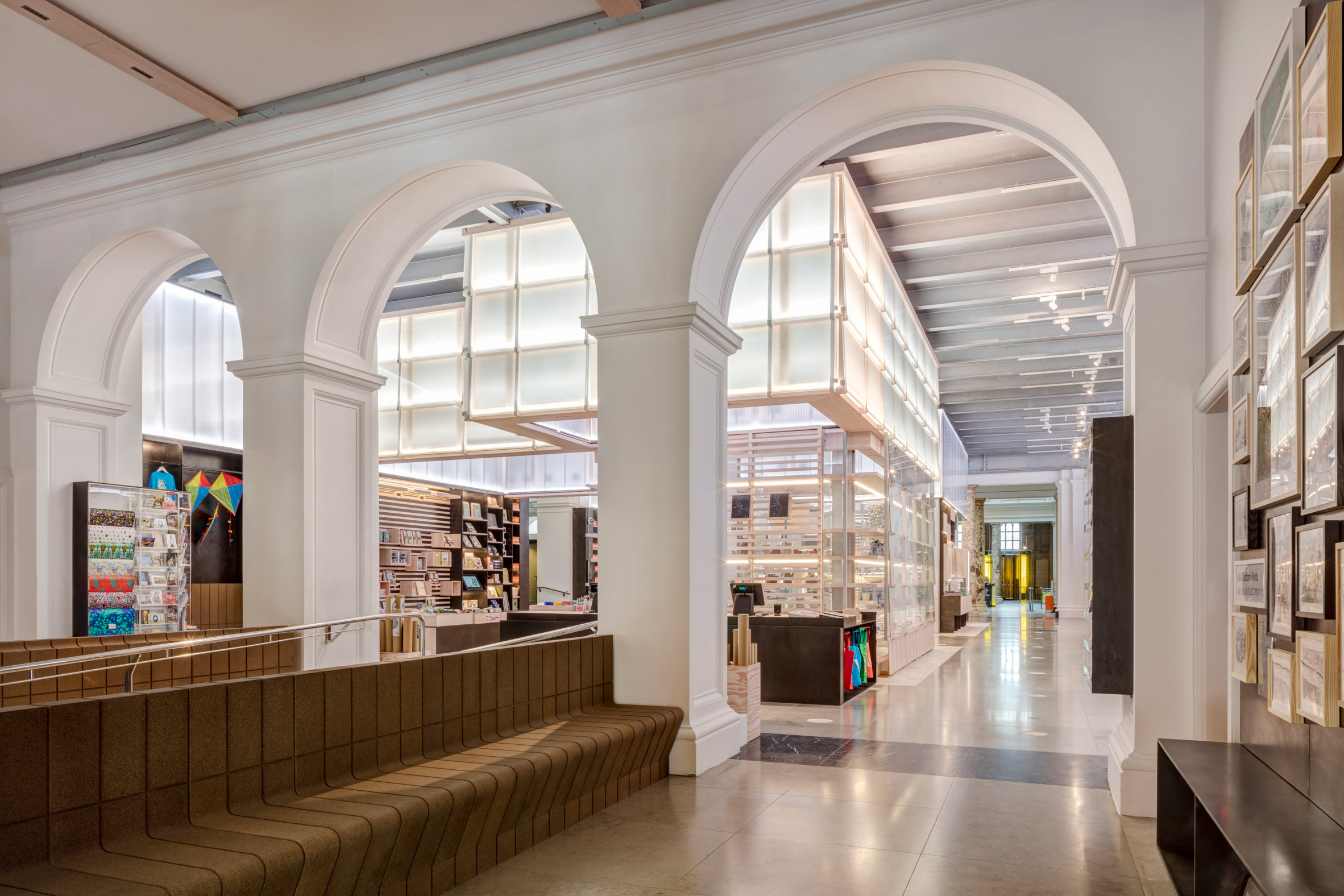 The new shop is located in the same space as the old one, just beyond the entrance of the historic London museum. It forms one of the main routes into the exhibition spaces, so had to also accommodate people passing through.

It was this that led Friend to design the shop as a pair of pavilions – creating “a concept of lanes and street facades”. The benefit of this approach is that it creates clear routes through the space, as well as extra wall space for displaying products. 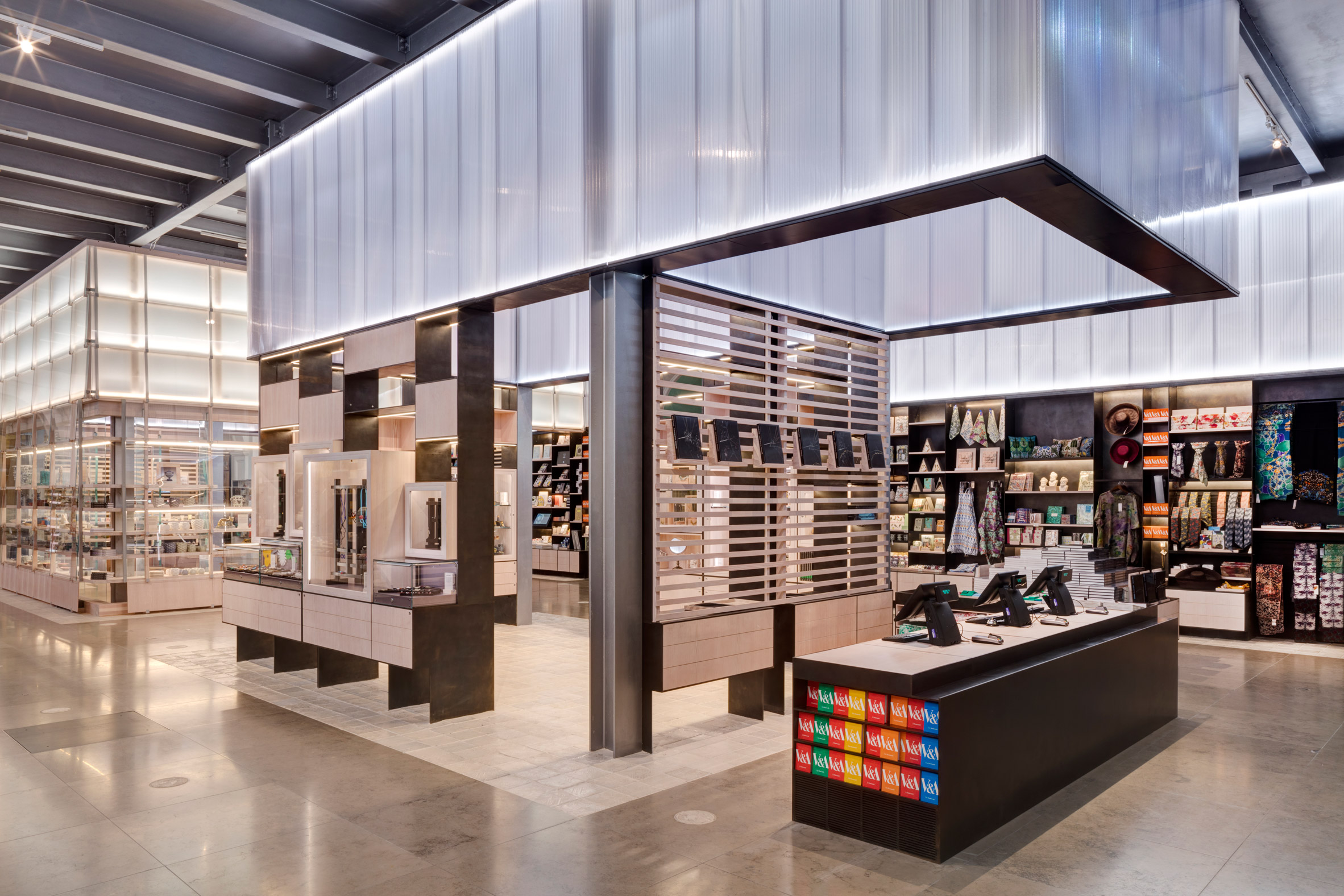 The first of the two structures is called the Jewellery Pavilion, as it forms a display space for jewellery collections.

It is framed by four so-called “weldments”, which are steel columns featuring an intricate patterned surface. These were produced through a process of laser cutting and hand welding, and are finished in a silver zinc spray. 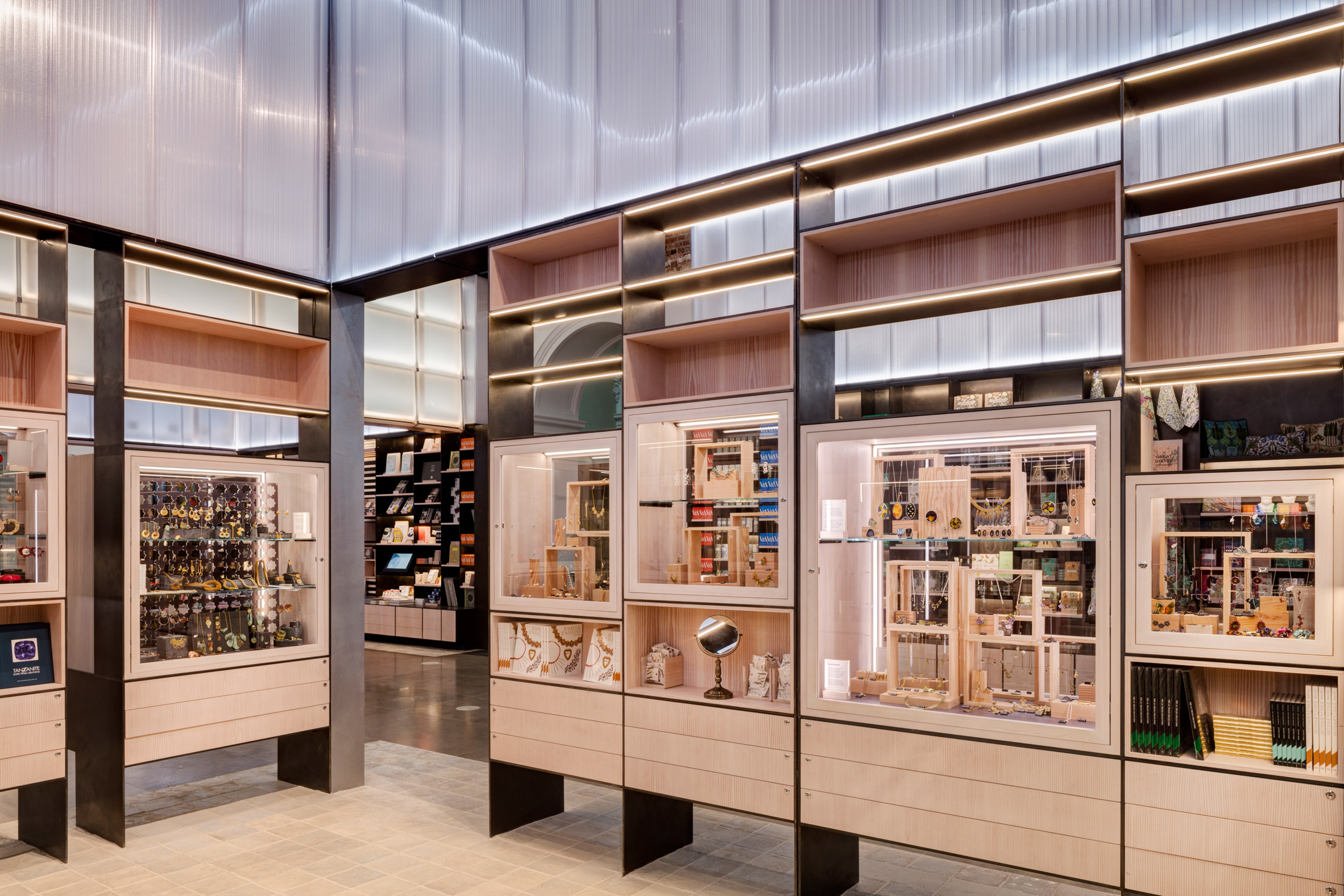 This combination of digital fabrication and hand craft is a common theme in the project. It crops up again in the second of the two pavilions, the Pocket Workshop, which features a structure that combines simple joinery with water-jet-cut glass fins.

The aim was to make the wooden shelves “appear to float on structural air”. 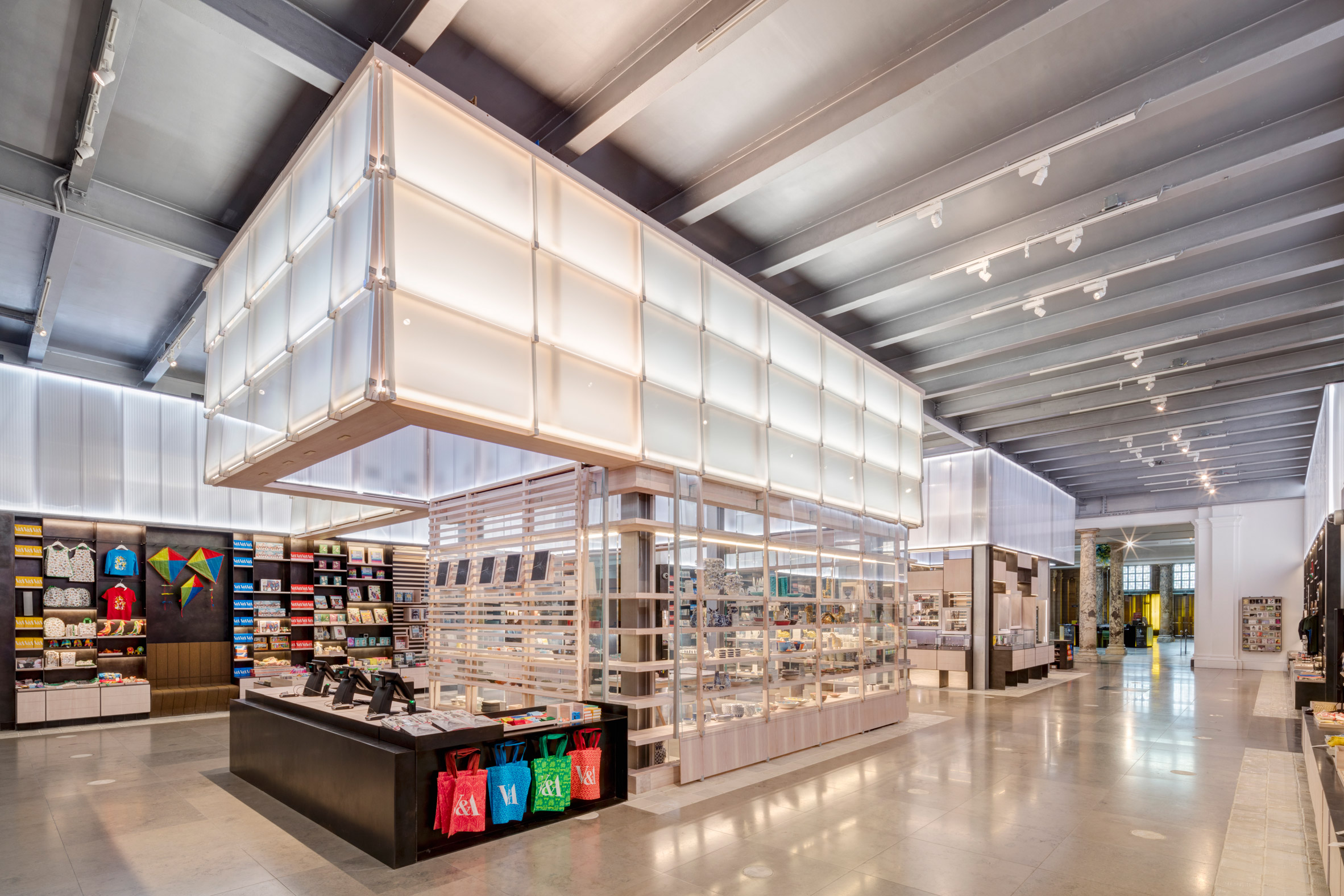 Both pavilions feature a floor of 3D-printed ceramic tiles, created in collaboration with Guan Lee of fabrication lab Grymsdyke Farm. They create a continuous, non-repeating pattern based on the design of a 20th-century Chinese bowl in the V&A’s collection.

These tiles were 3D-printed by a robotic arm, before being hand glazed. 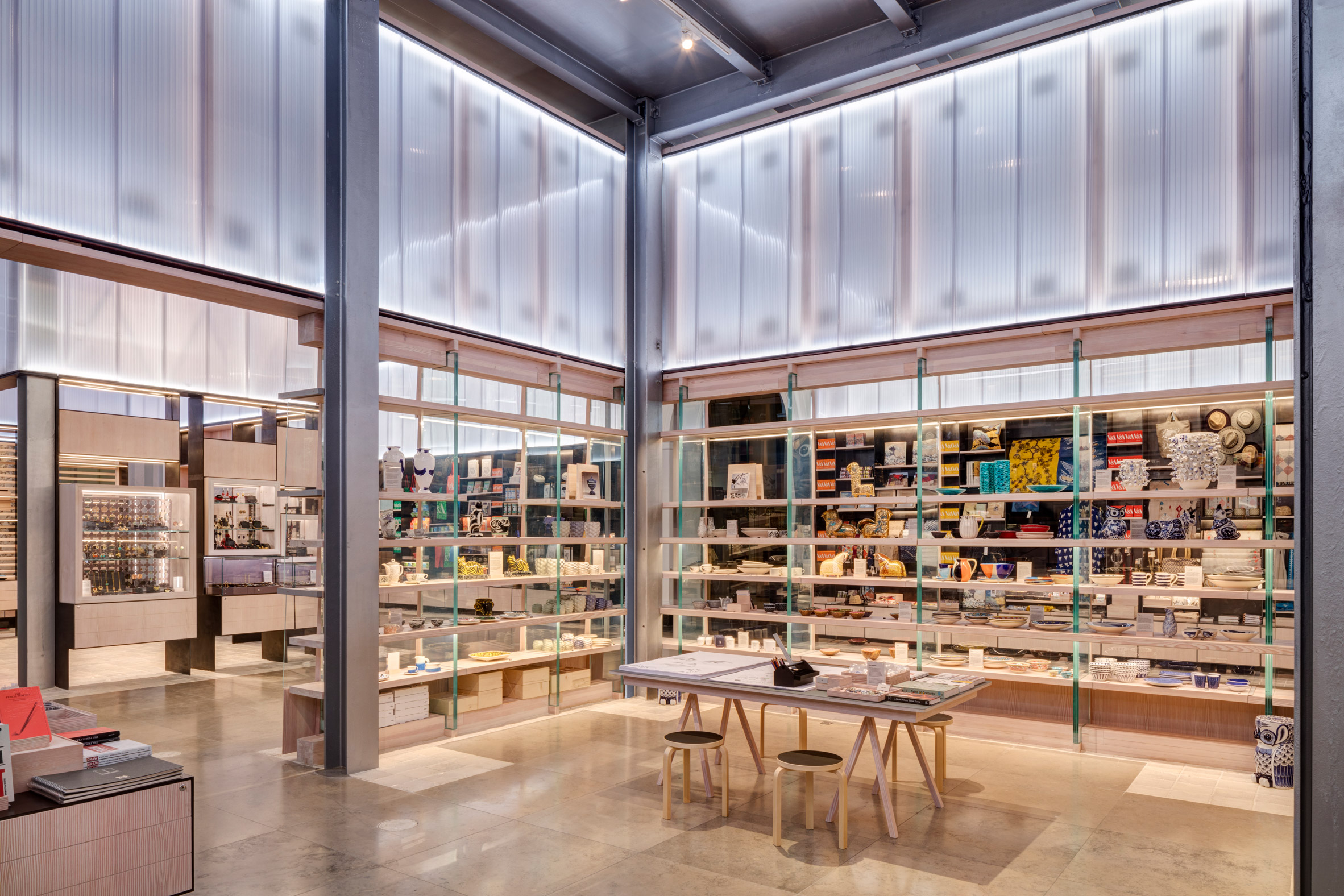 “By design, all materials have been digitally manufactured, either laser cut, CNC routed or 3D printed, before painstaking application of a custom hand finish so as to radiate more than one colour depending on how they are viewed, to create a shimmer effect,” said the V&A. 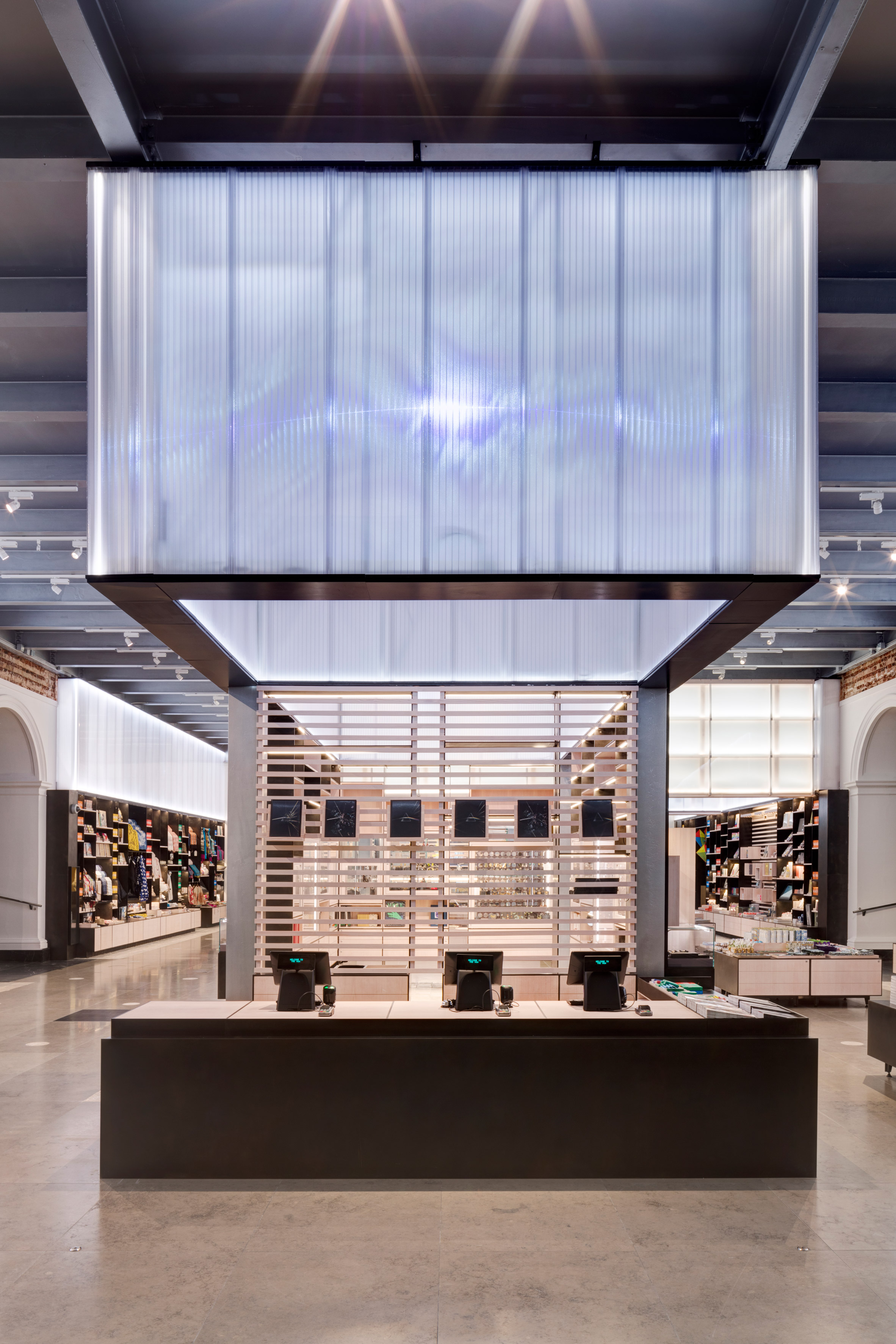 As well as the two pavilions, the walls of the space also offer display areas for merchandise. They integrate a versatile “flip-flop” system of trays and boxes, which can switch between tabletop and wall displays.

The renovation also involved removing an old suspended ceiling, which was installed in the 1970s. 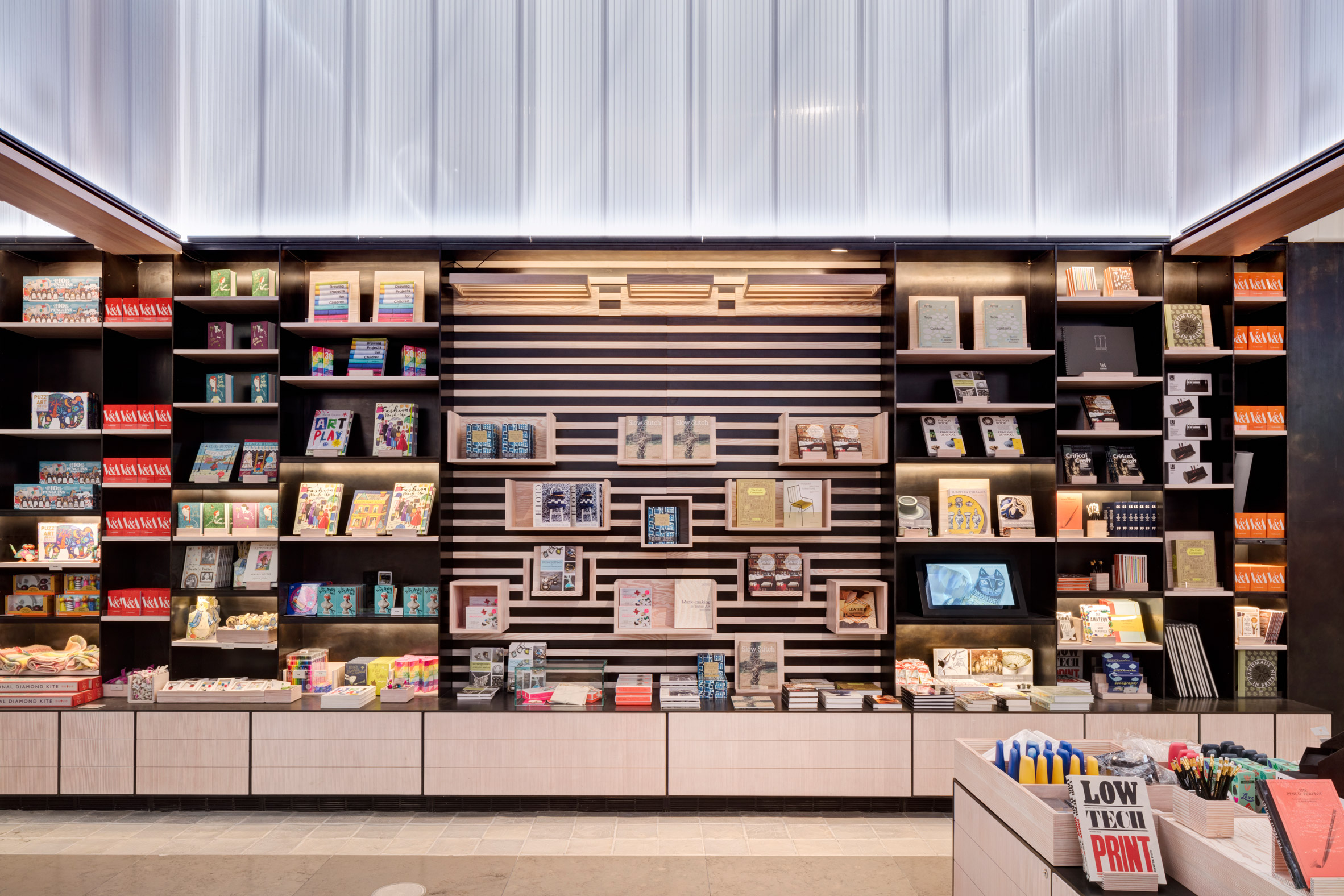 The new shop opened on 5 May 2017, five months after the V&A hosted a season dedicated to engineering, which featured an exhibition charting the career and legacy of Ove Arup and a robotically woven carbon-fibre pavilion. 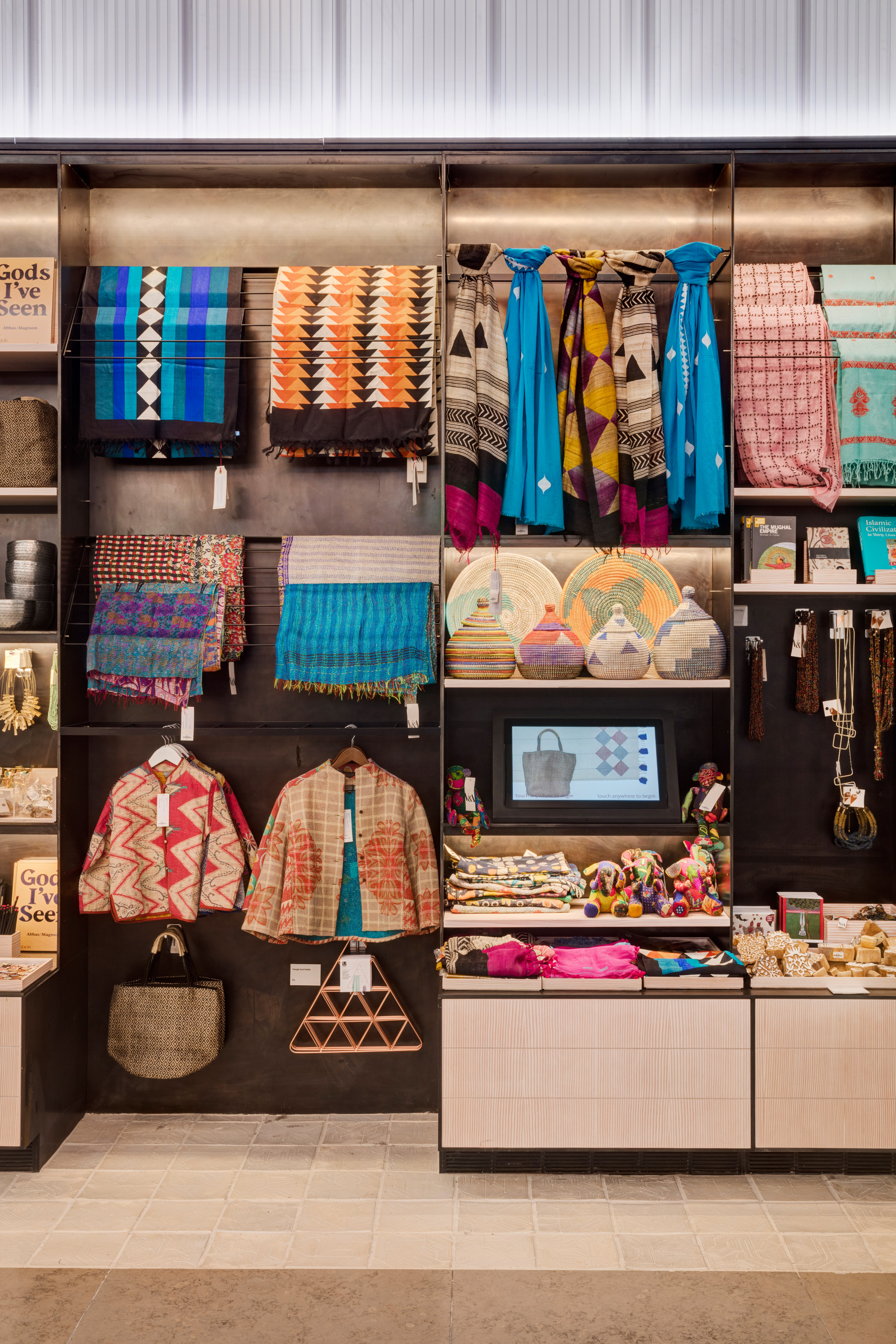 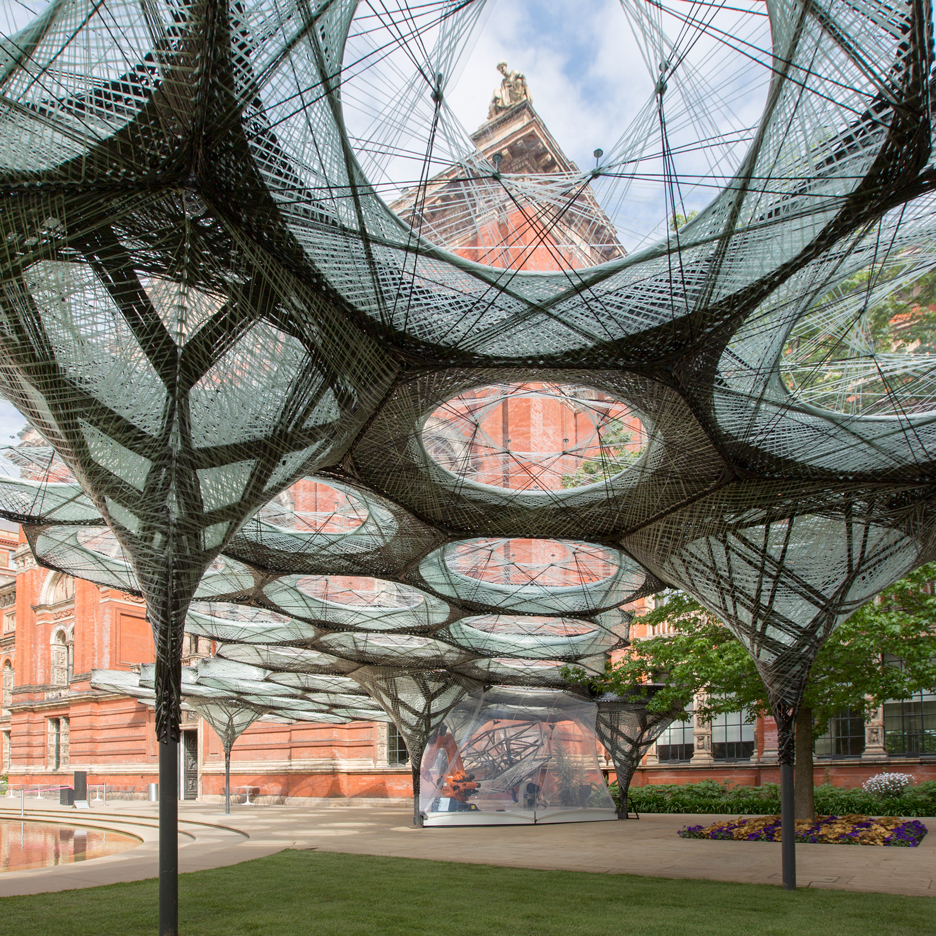 Photography is by Ed Reeve.