Swathes of aluminium tiles wrap around this sharply pointed tower by Amanda Levete’s studio AL_A, which is set in the former gardens of the British embassy in Bangkok. 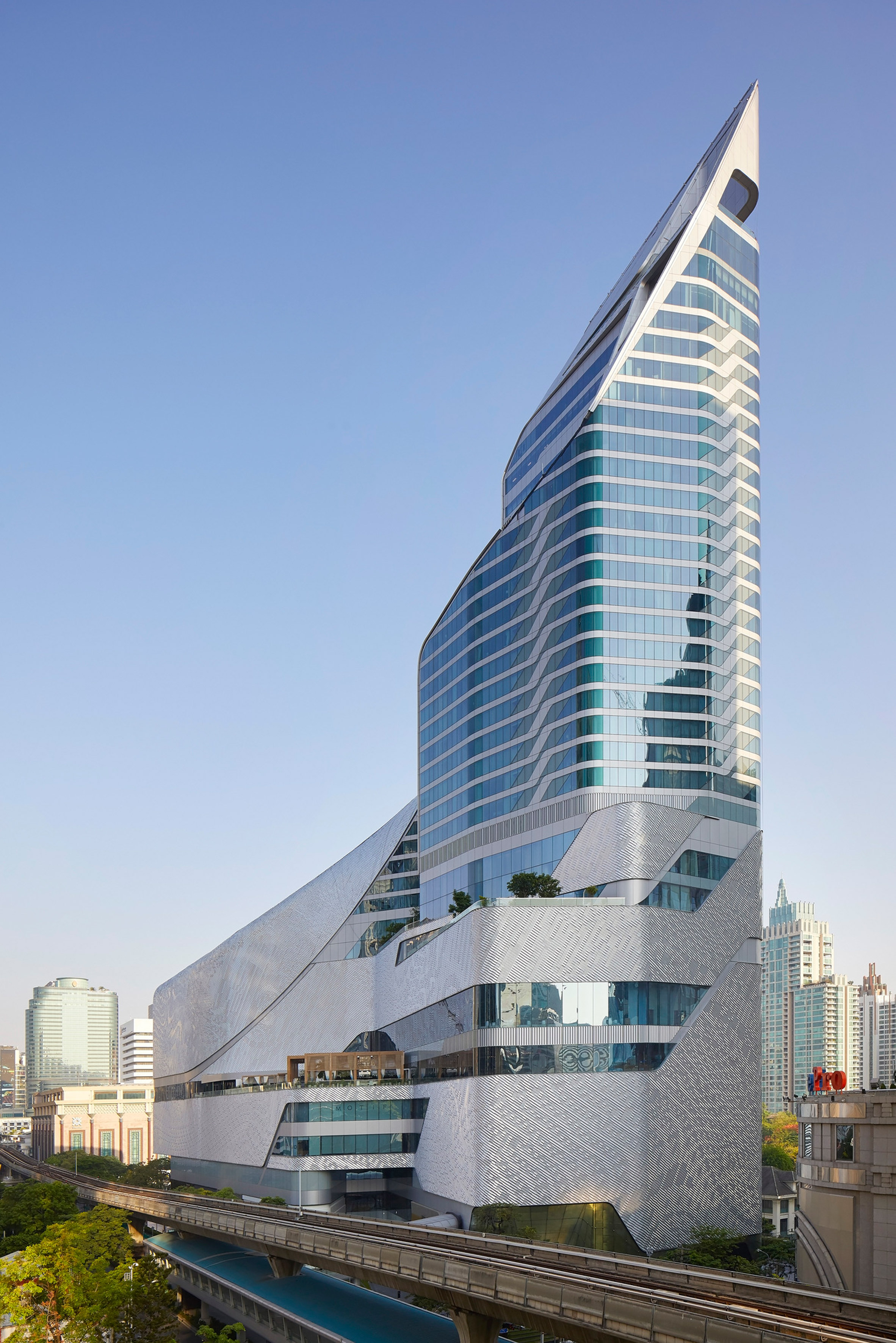 London-based AL_A worked with local architects Pi Design on the 37-storey tower named Central Embassy, which hosts a luxury shopping centre at podium-level and the five-star Park Hyatt hotel across its upper floors.

Broad bands of textured aluminium tiling surround the podium before lifting up to cover strips of the tower’s mono-pitched form. Narrower stripes of untextured tiling wrap the tower horizontally to indicate the floors and corresponding staircases. 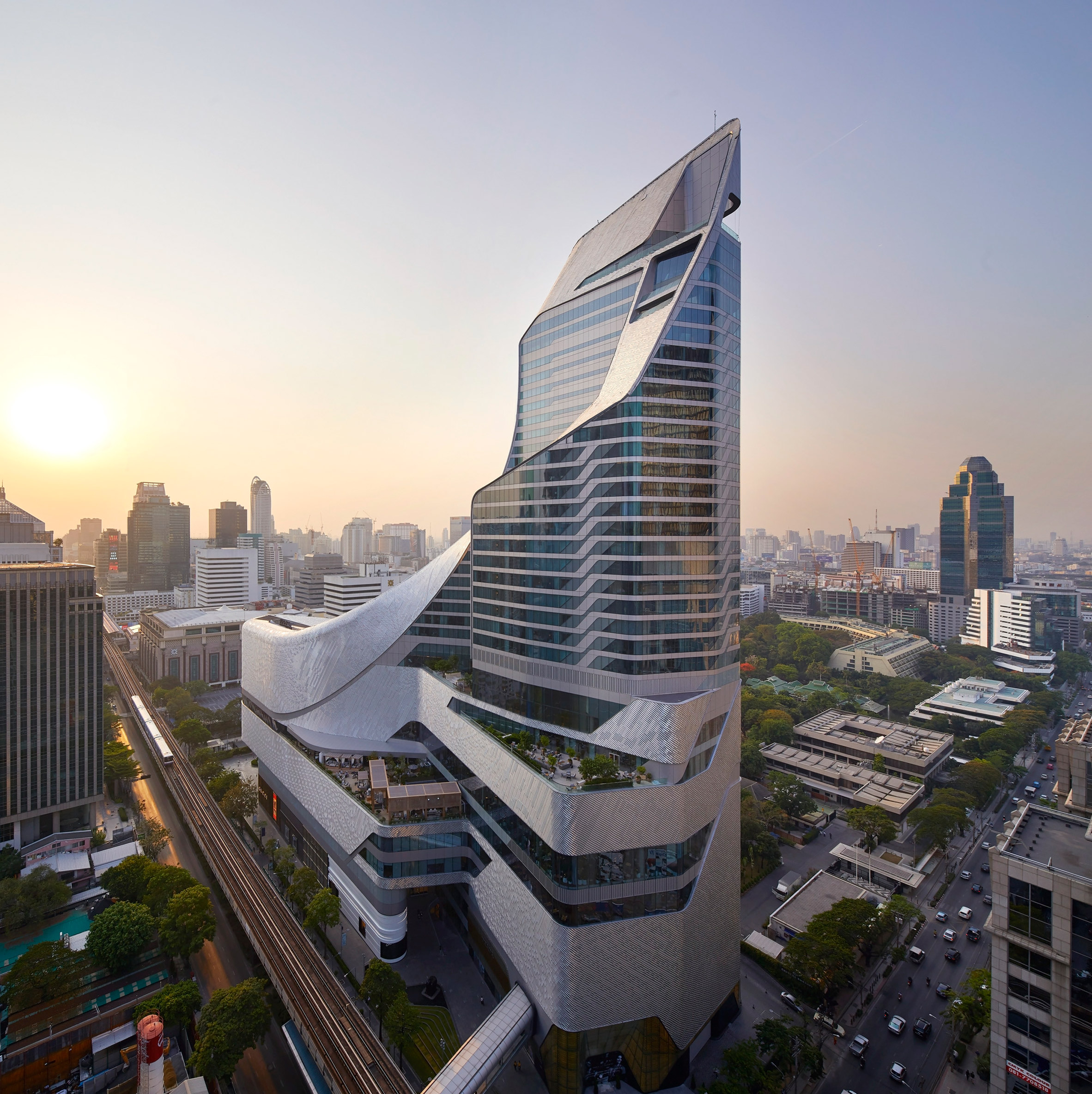 The raised design of the aluminium tiles are intended as a reference to the intricate patterns found in traditional Thai craftsmanship.

AL_A likens the the patches of light and shadow created by the texture of the 300,000 aluminium tiles used on the facade to a moiré motif –where linear patterns are overlaid to create a rippling effect. 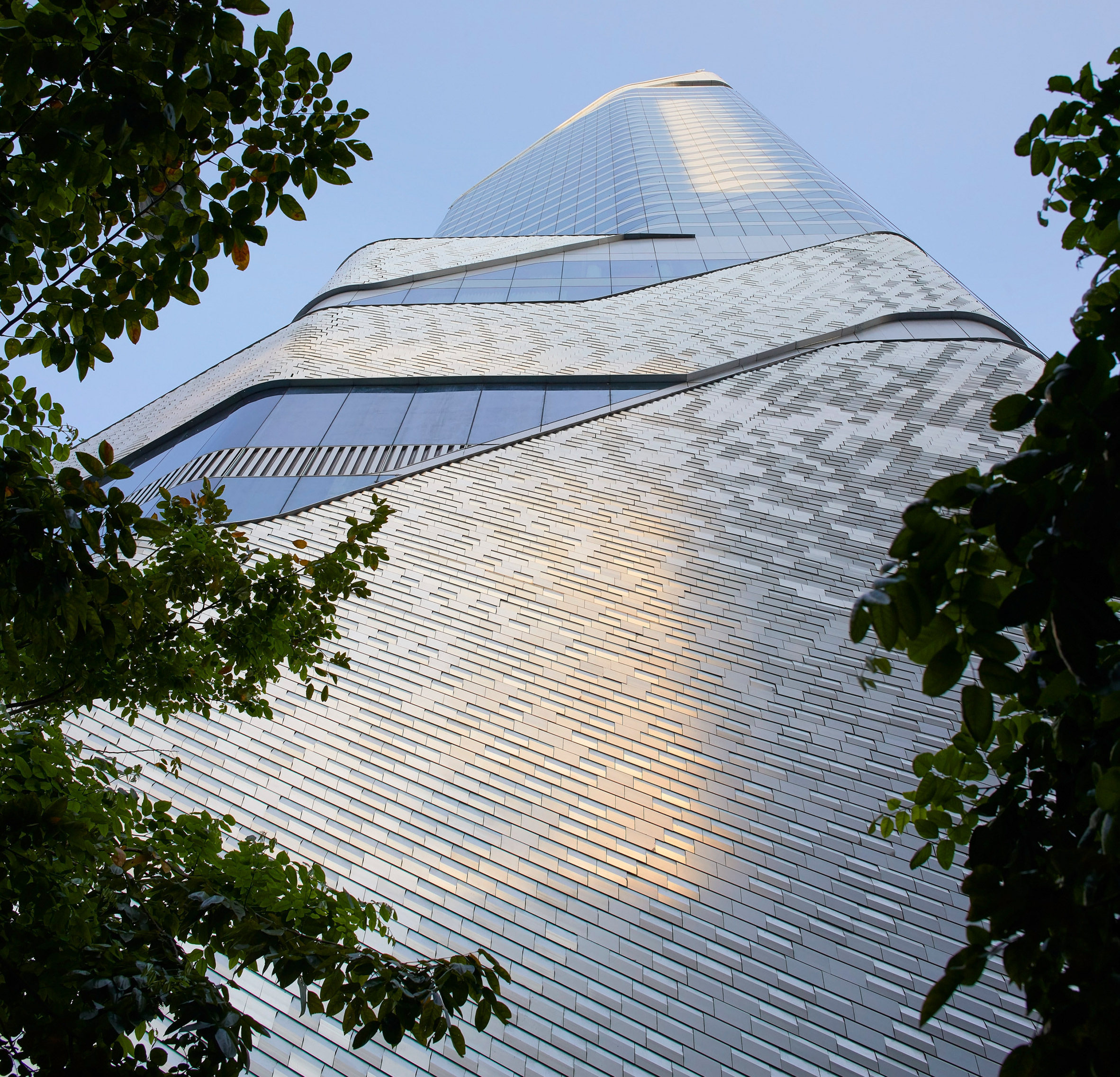 “By embracing advanced technology as well as local heritage and culture, the building is local to its surrounding yet simultaneously redefines the location,” said Levete. “Central Embassy goes to the heart of what makes Bangkok such an extraordinary place.”

“A distinctive new presence on the skyline that is both fresh and exciting, Central Embassy nonetheless feels like it has always belonged here, already a valued part of the city.” 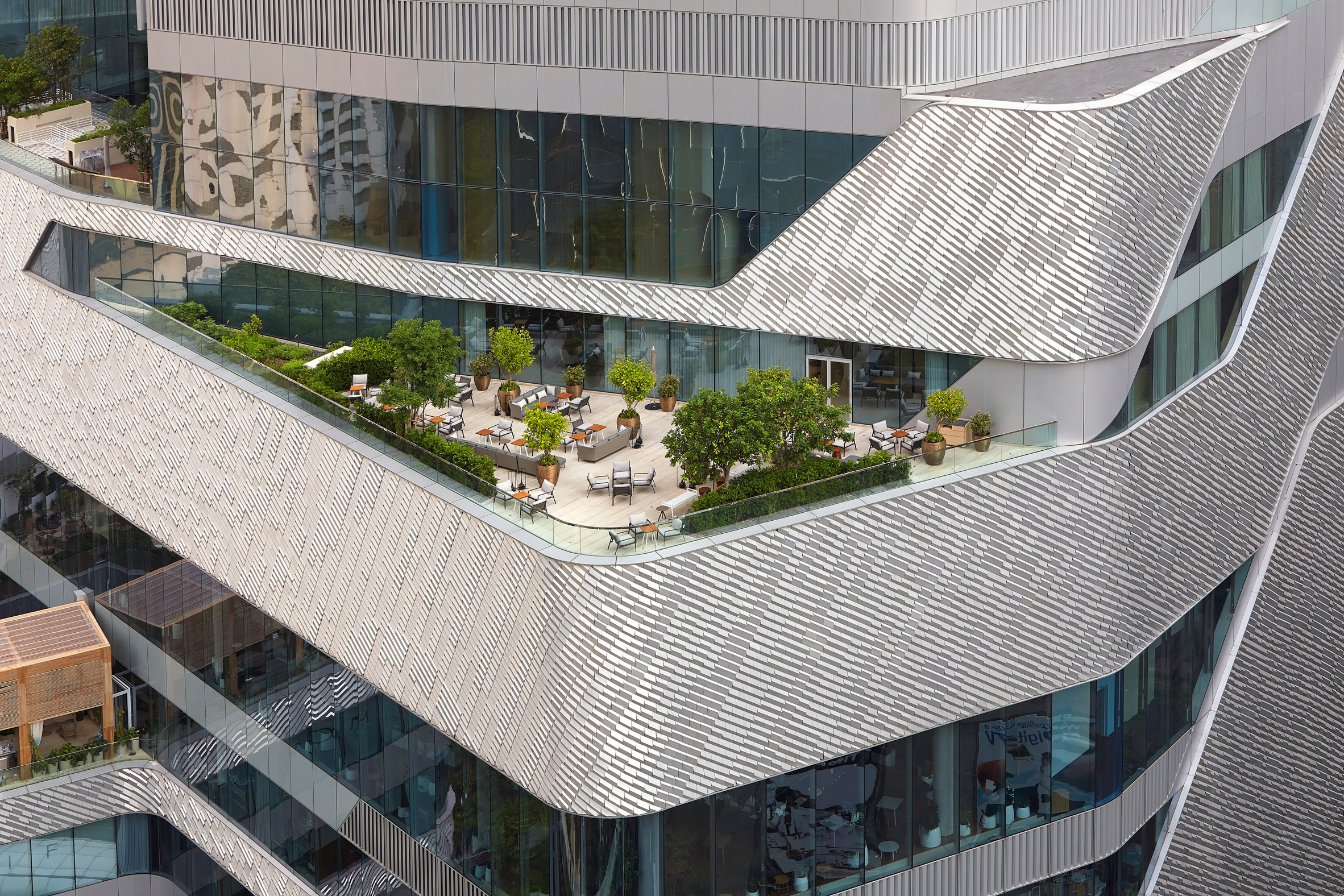 Setbacks provide pockets of outdoor space across the lower levels, while a single cut just below the pinnacle forms a “sky terrace” for hotel guests.

Designed for the Thai department store operator the Central Retail Corporation, the seven-storey podium of the building is home to the shops of luxury fashion brands like Chanel. 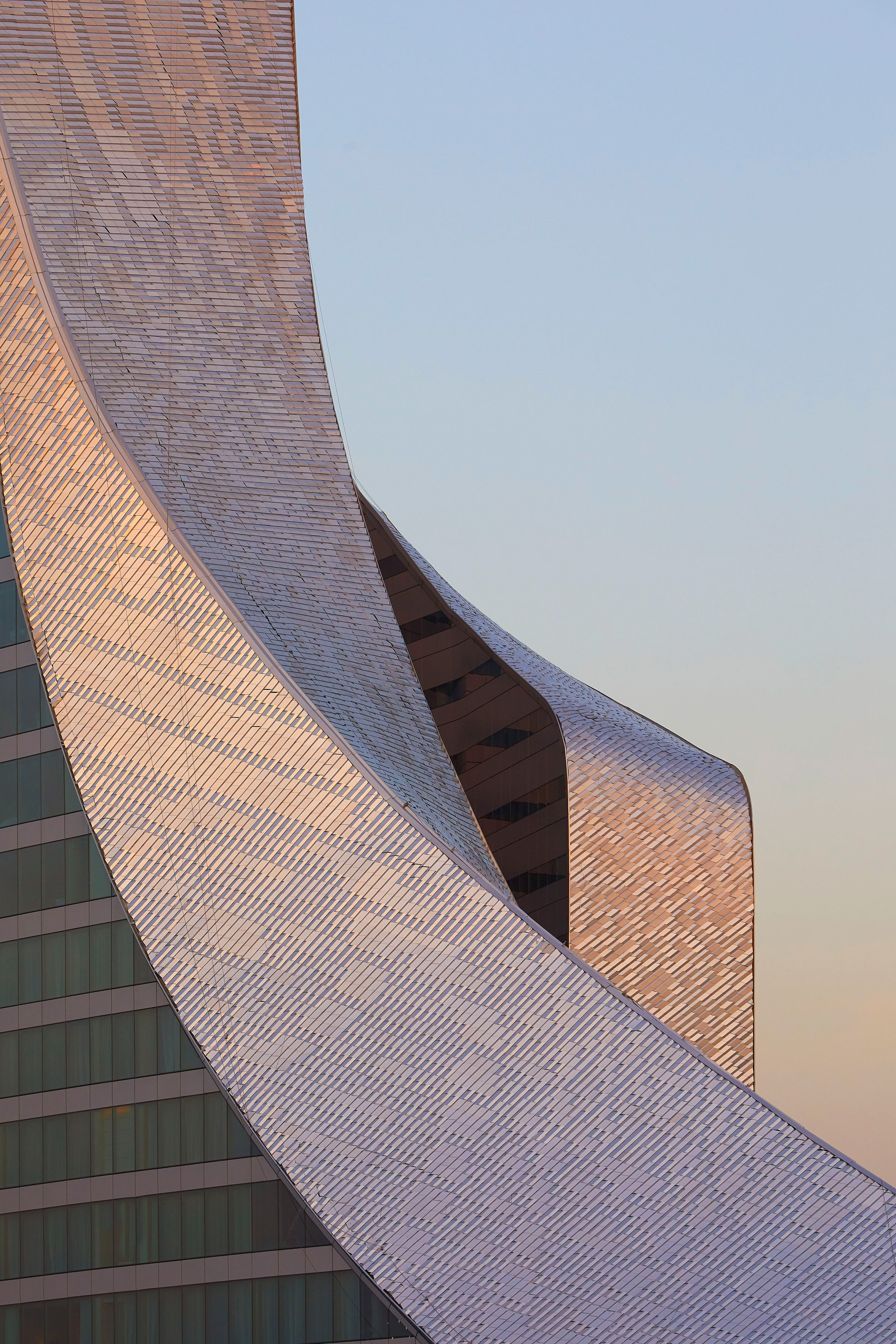 The plan reads as a figure-of-eight where the podium-level shopping centre links with the tower, a design intended to provide continuity between the two separate programmes. Collectively, the hotel and shopping centre have a floor plan of 140,000 square metres. 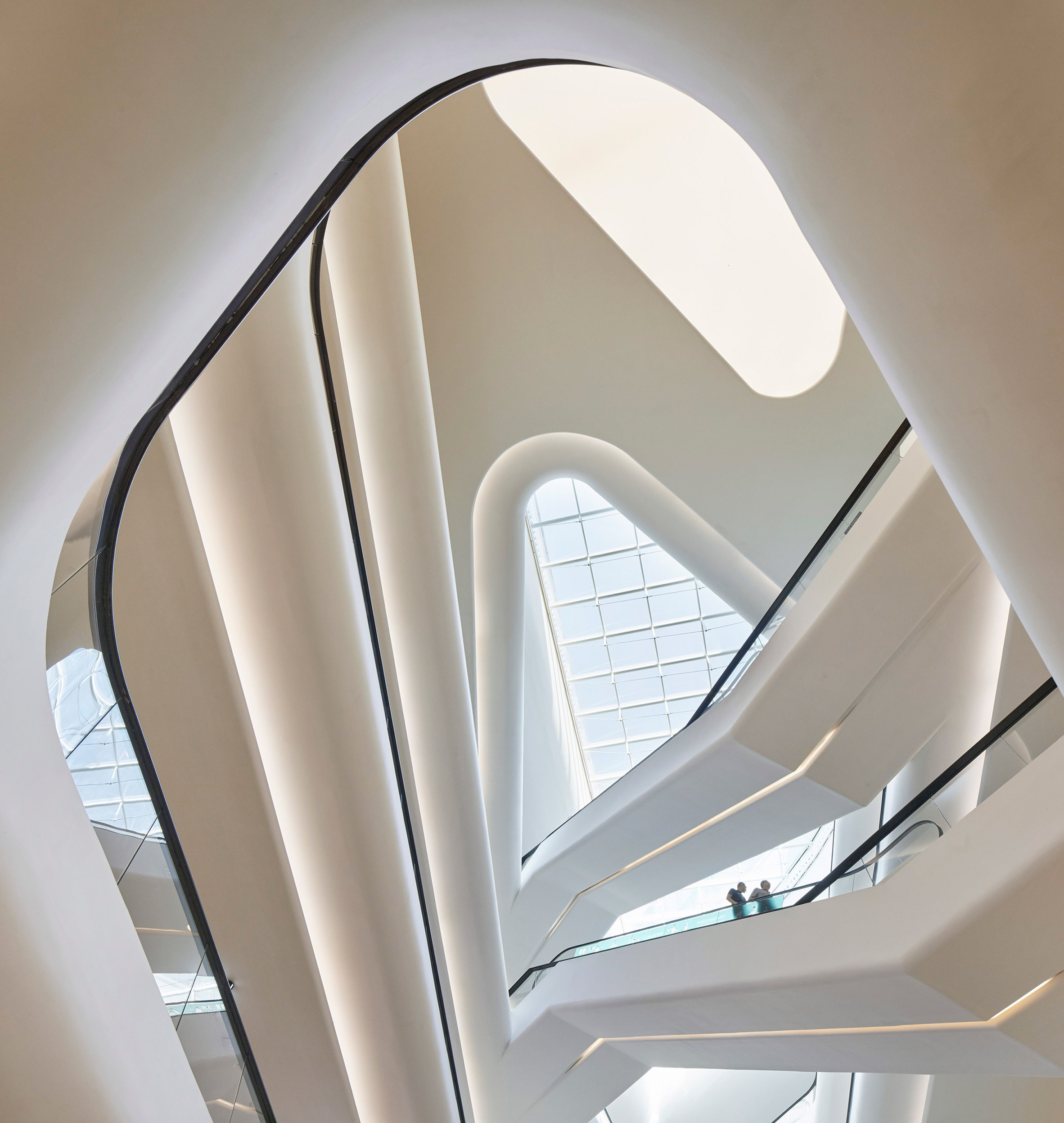 Inside the shopping centre, escalators rise through a series of skylit oblong openings.

A pair of wells channel natural light down through the centre of the tower, and divide the hotel into two parts – private rooms facing the Nai Lert Park, and a series of communal spaces such as the bar, reception and sky terrace that face the city centre from Ploenchit Road. 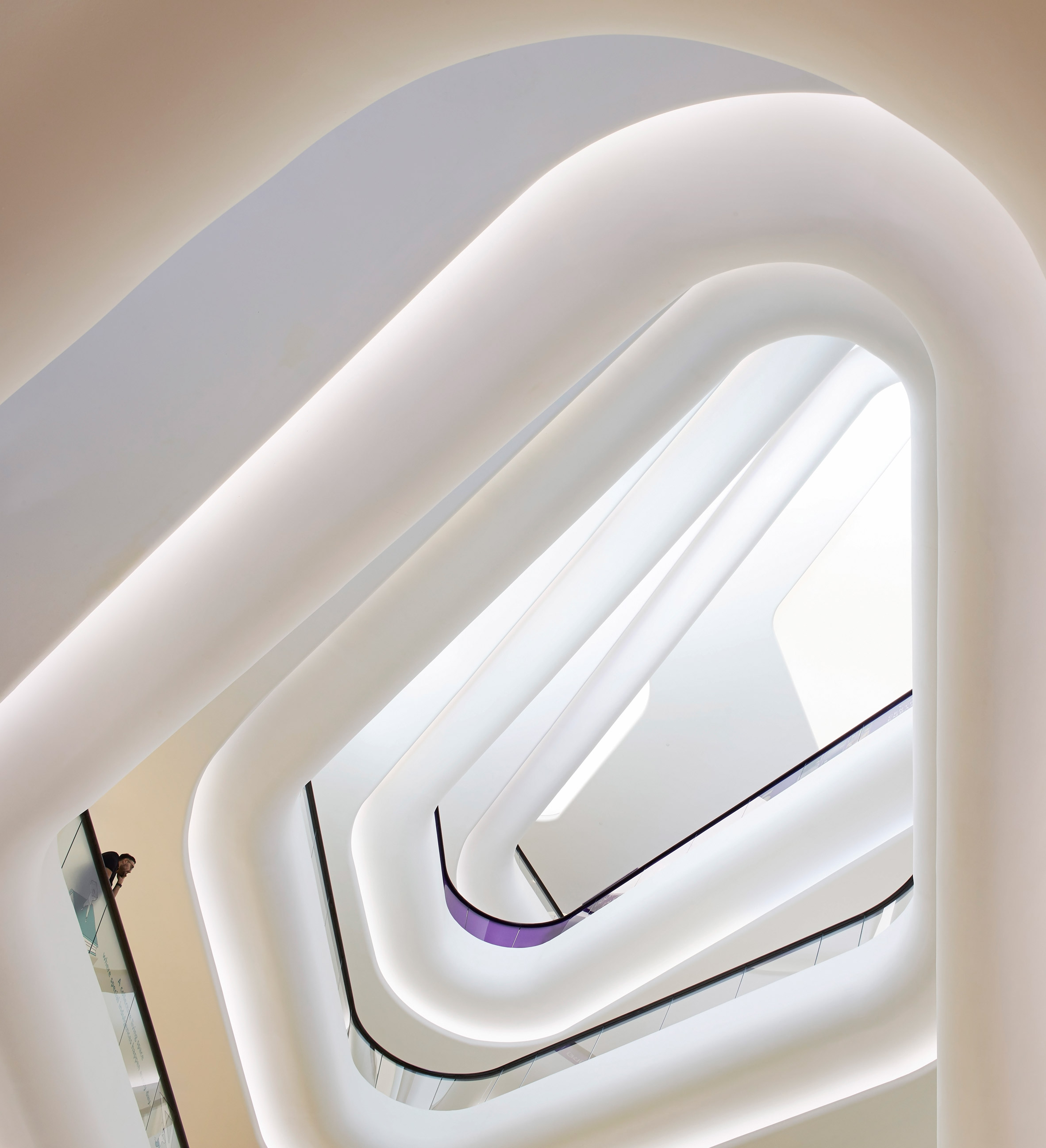 Levete will be discussing the project at the V&A on 26 June for the opening of the Exhibition Road Quarter, which coincides with the unveiling of the new entrance AL_A has just completed for the museum. 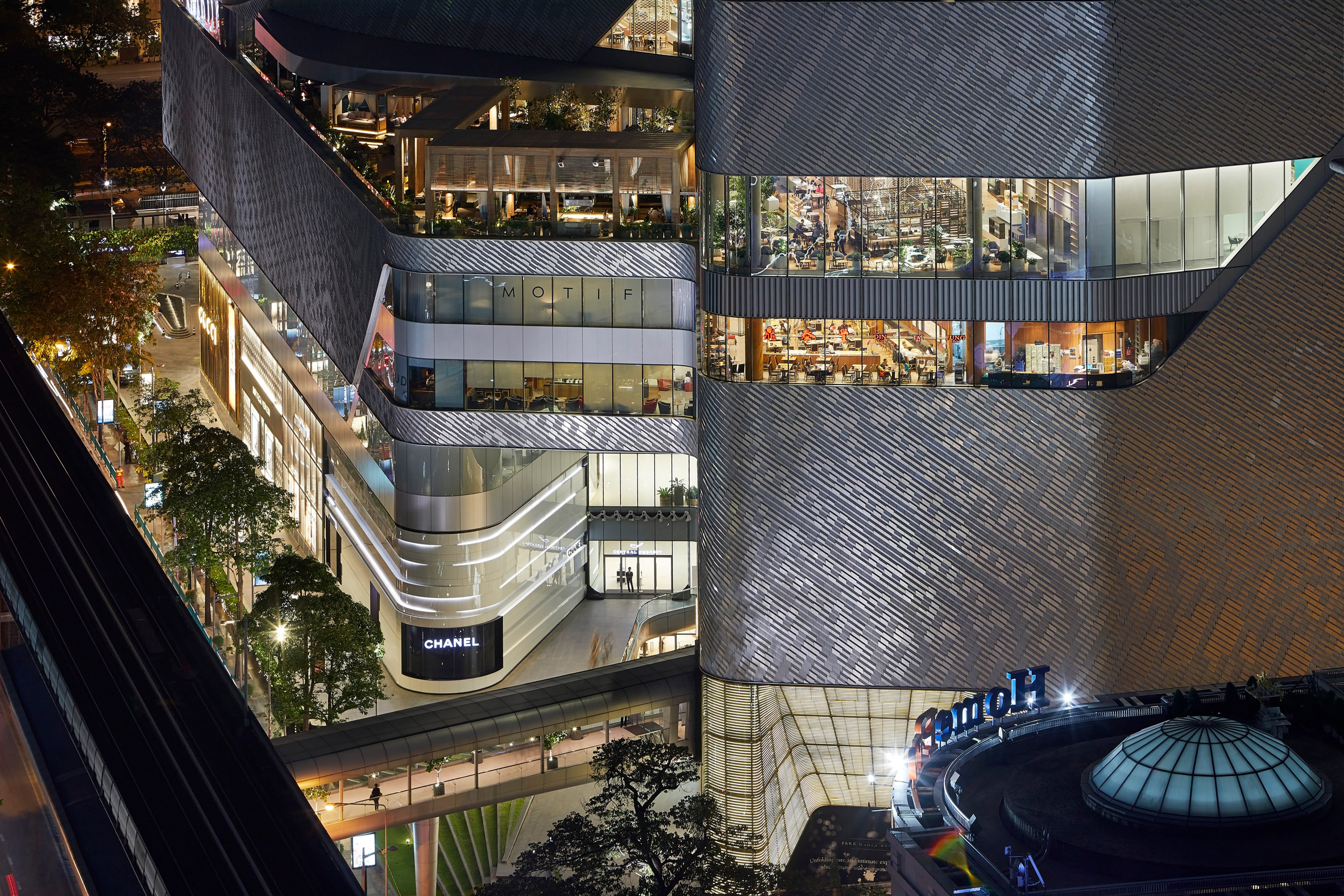 Like Central Embassy, and the firm’s recently completed MAAT museum in Lisbon, the V&A’s new entrance also features bespoke tiling. When it opens next month, it will feature the world’s first porcelain-tiled courtyard above a new gallery space. 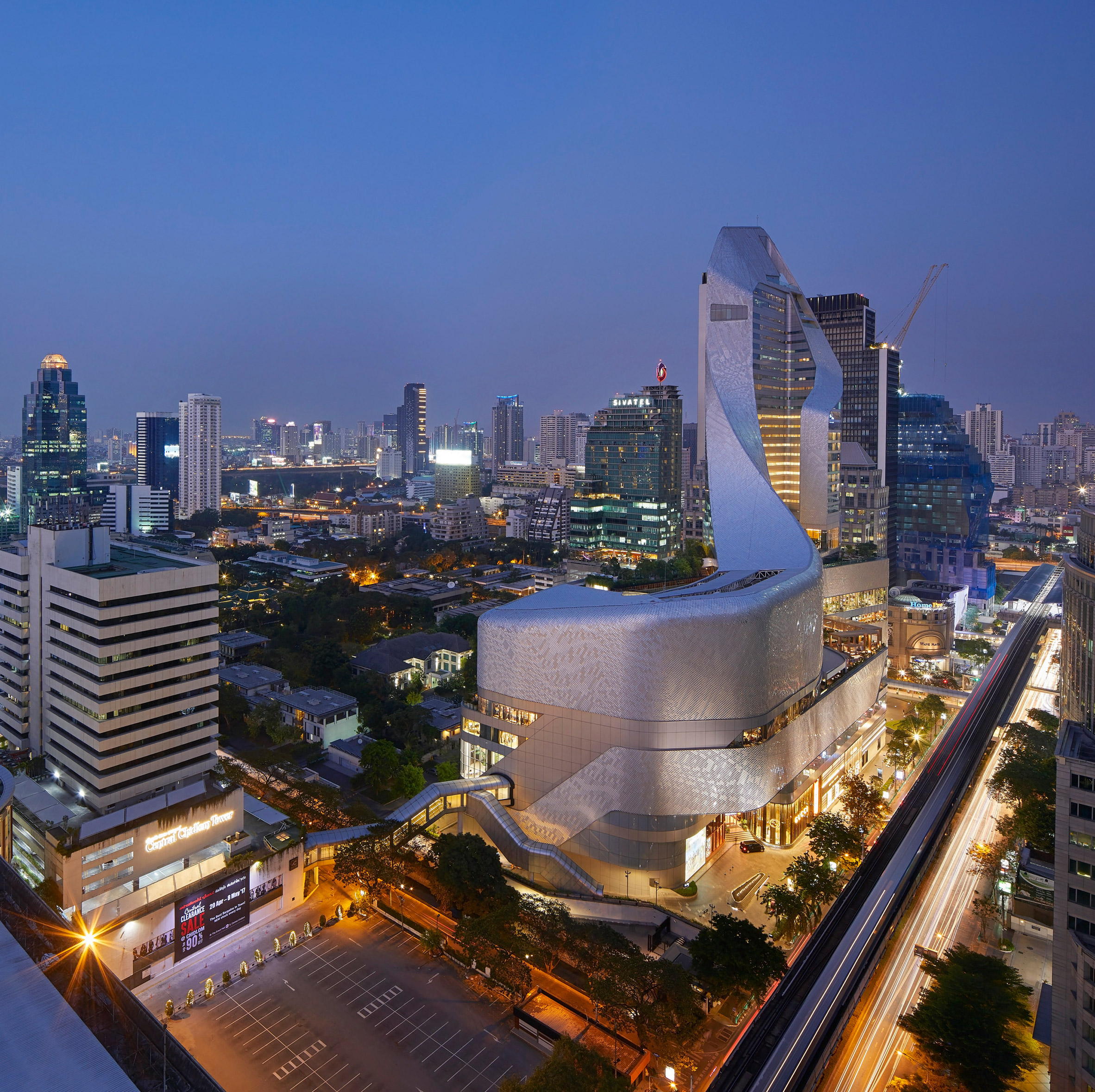 Stirling Prize-winning architect Amanda Levete founded her firm AL_A with directors Ho-Yin Ng, Alice Dietsch and Maximiliano Arrocet in 2009. She came in at number 179 on the inaugural Dezeen Hot List – a guide to the key players of the architecture and design industry. 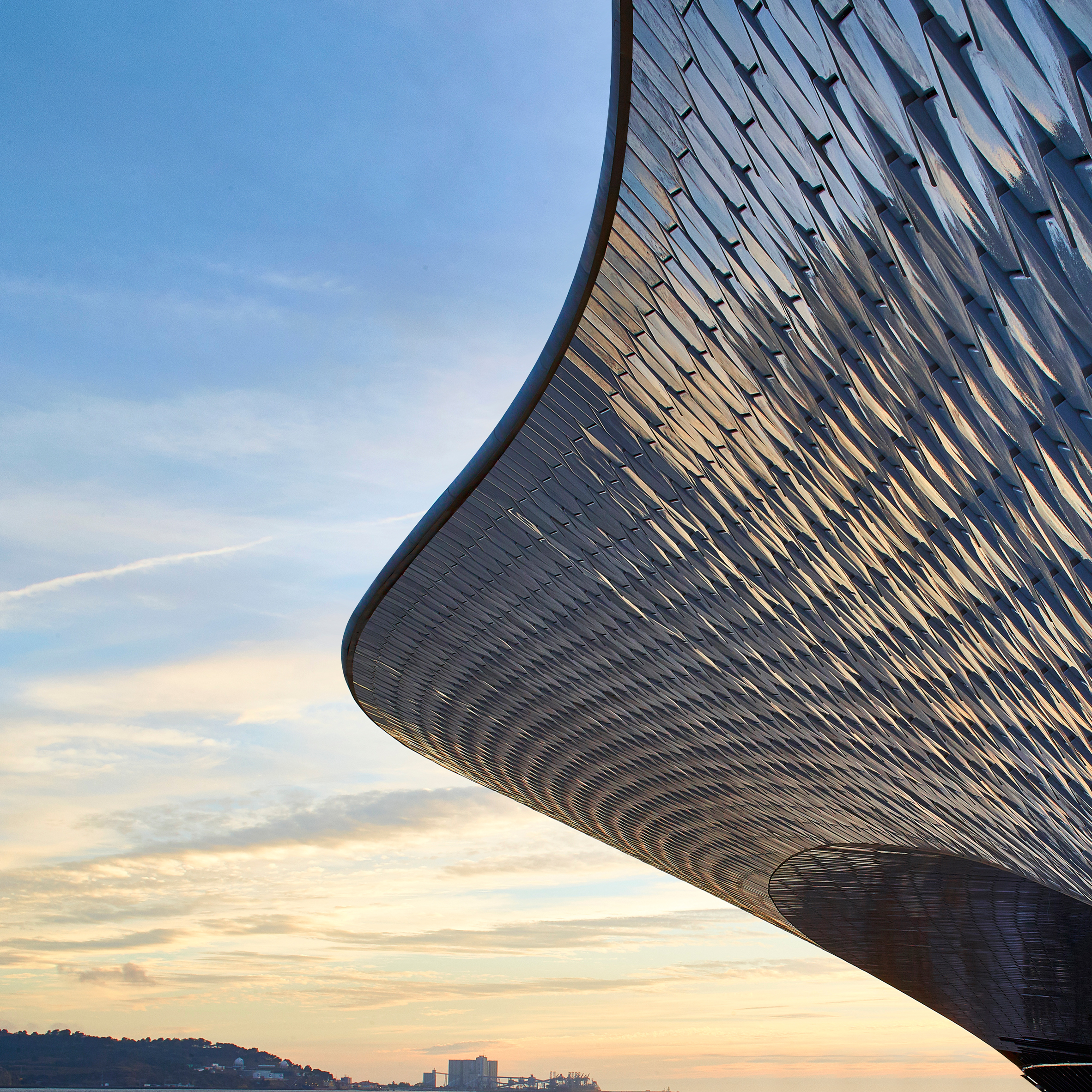