The pavilion named KnitCandela, was built using KnitCrete – a new 3D-knitted textile technology for creating curving concrete structures, without the need for expensive and time-consuming moulds. 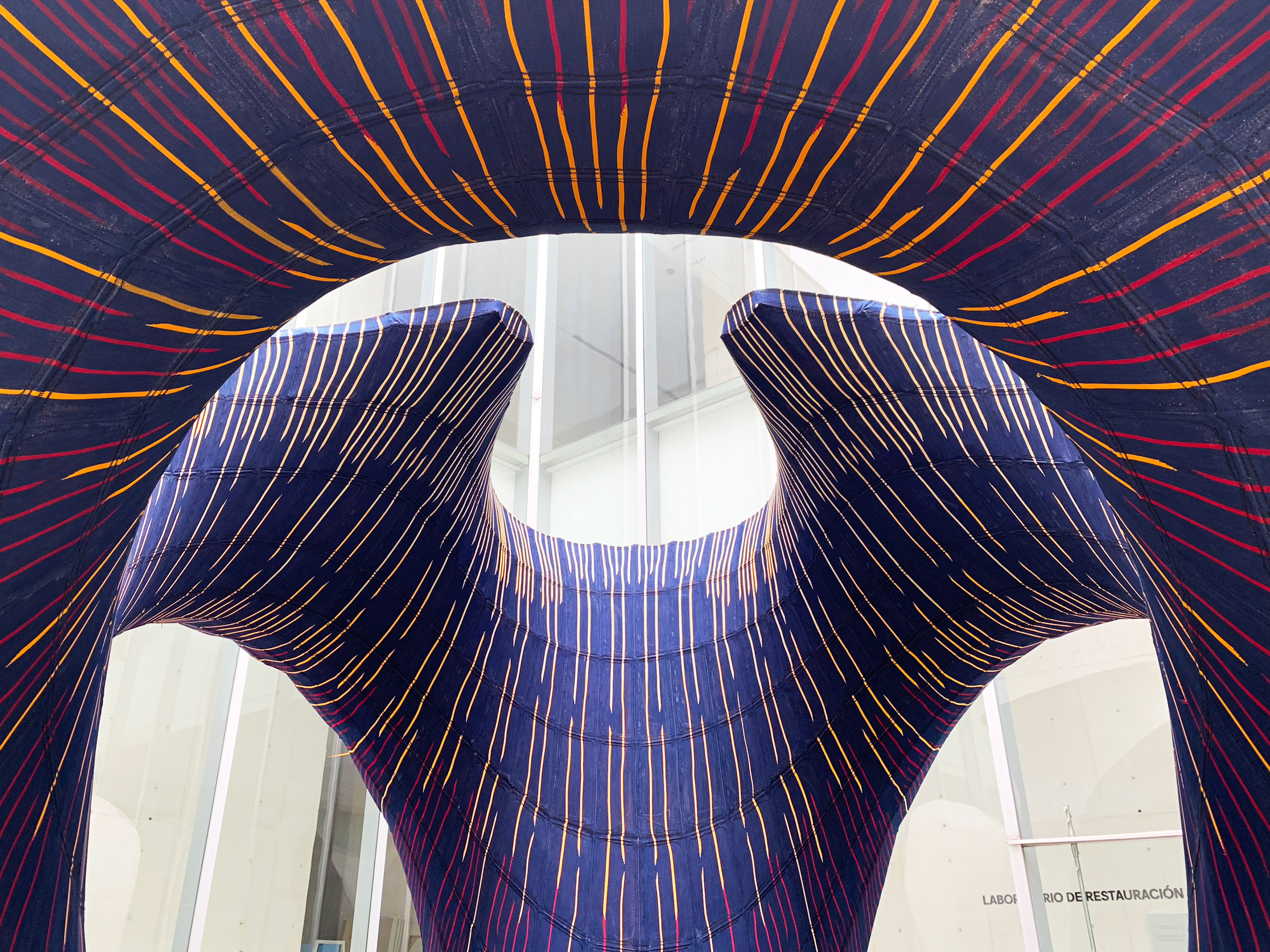 The colourful pavilion is called KnitCandela in homage to the work of Spanish-Mexican architect and engineer Félix Candela, who created dramatic curved concrete shells in his buildings such as the Los Manantiales Restaurant in 1958.

Over two miles of yarn was knitted into four strips of between 15 and 26 metres in just 36 hours using a digital fabrication technique, then flown over from Switzerland to Mexico in suitcases. 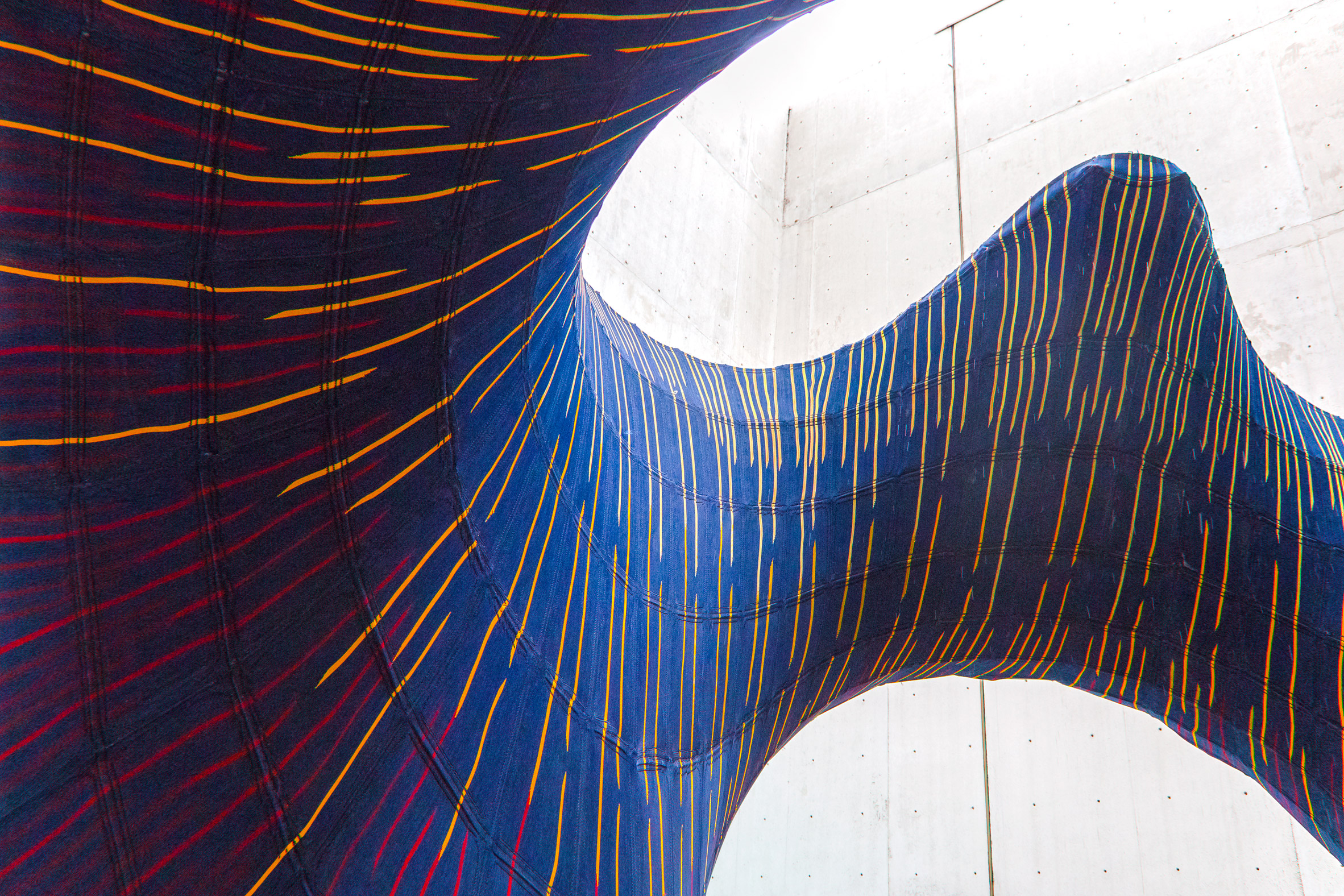 Once in situ at the Museo Universitario Arte Contemporáneo (MUAC) in Mexico City, the four strips of seamless, double-layered fabric were suspended from a wooden frame using a tension cable-net system.

Next, 1,000 modelling balloons were inserted into the pocket between the two fabric layers to create the desired shape, before the exterior was coated in a special cement paste to make it rigid. 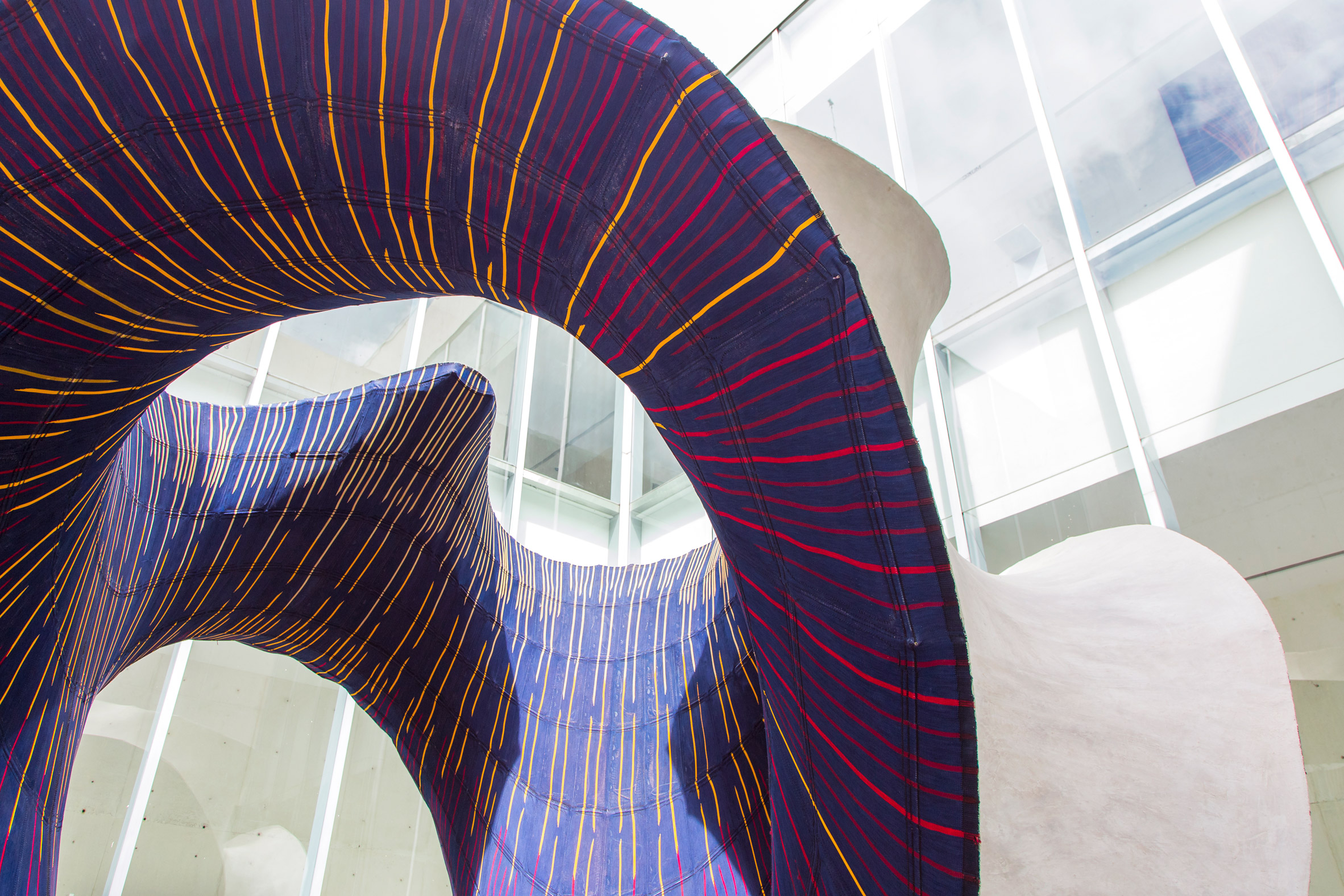 Extra elements in the exterior textile strips had been designed in to create openings for balloon insertion and control their shape once inflated, so only one size of balloon was required. These pockets of air create a waffle shell once the structure is cast in concrete.

The concrete itself was added by hand, making the KnitCrete method a hybrid of digital innovation and traditional construction techniques. 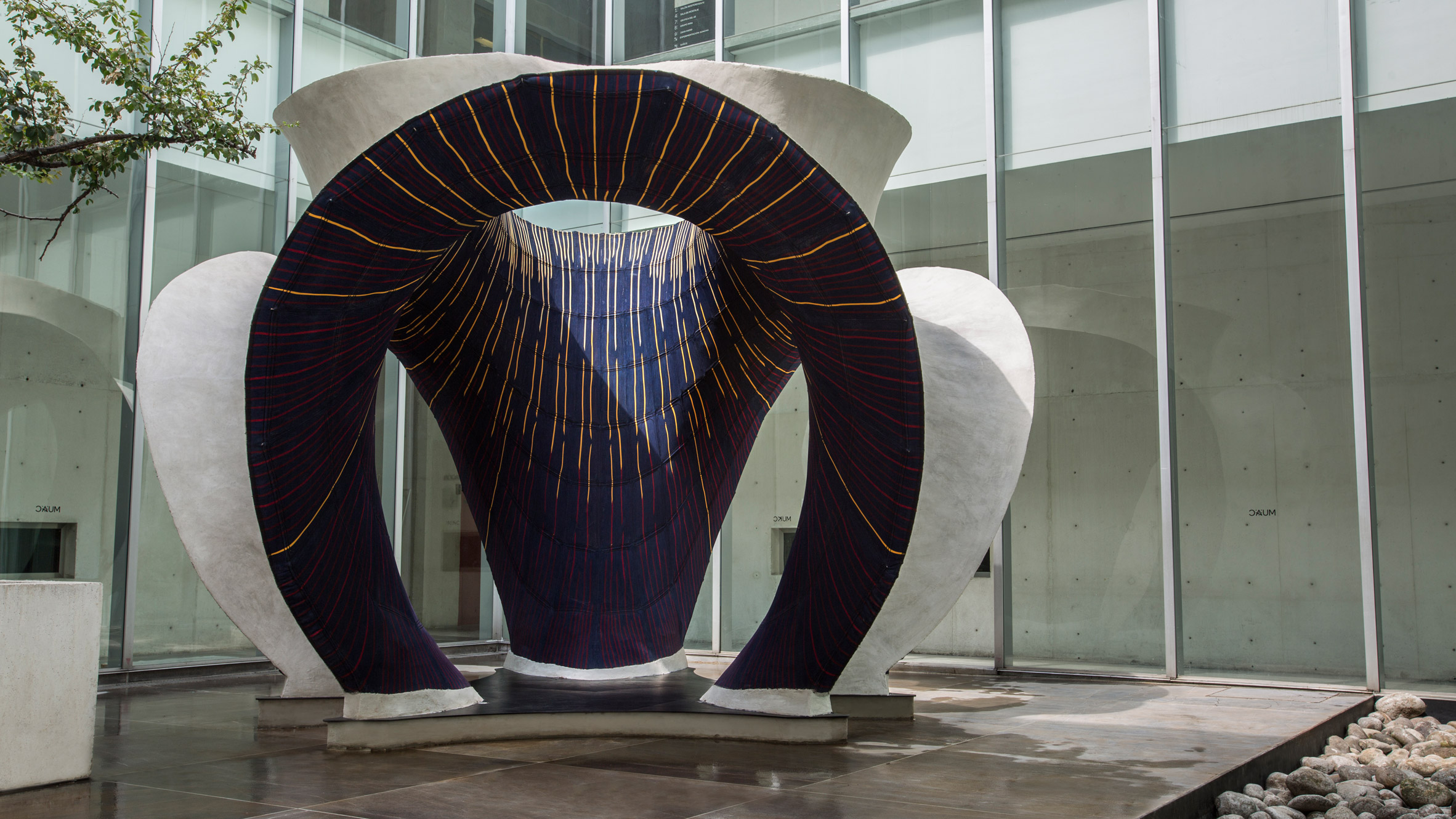 The internal layer of fabric was left bare underneath the concrete shell, creating a vibrant surface covered in colourful stripes. The pattern accentuates its frilled shape, which was designed to be reminiscent of the billowing folds of a traditional Mexican Jalisco dress.

In total the knitted fabric weighs just 25 kilograms and the cable net 30 kilograms, whilst the concrete shell weighs 5 tonnes. 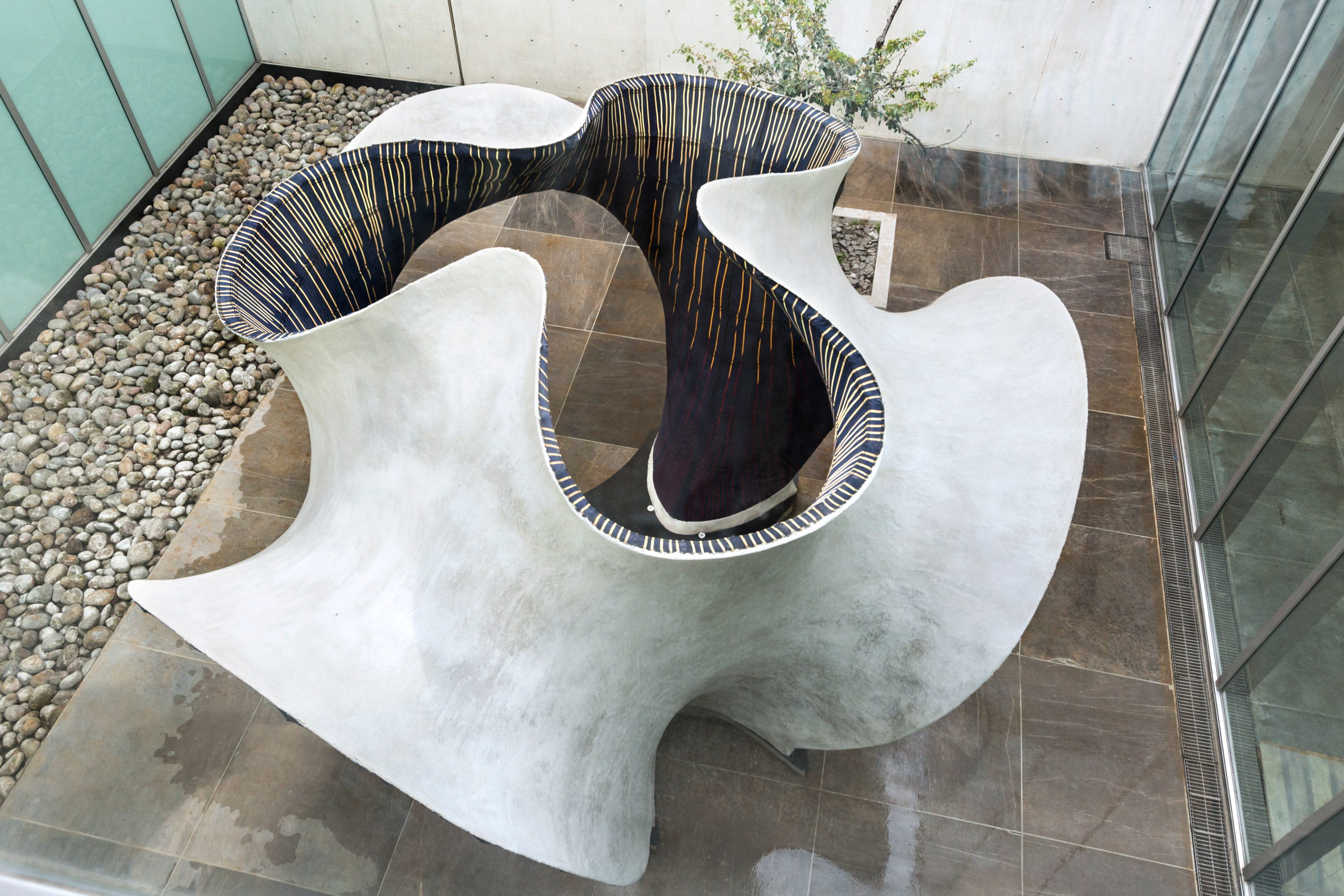 KnitCandela is part of ZHA’s first exhibition in Latin America. 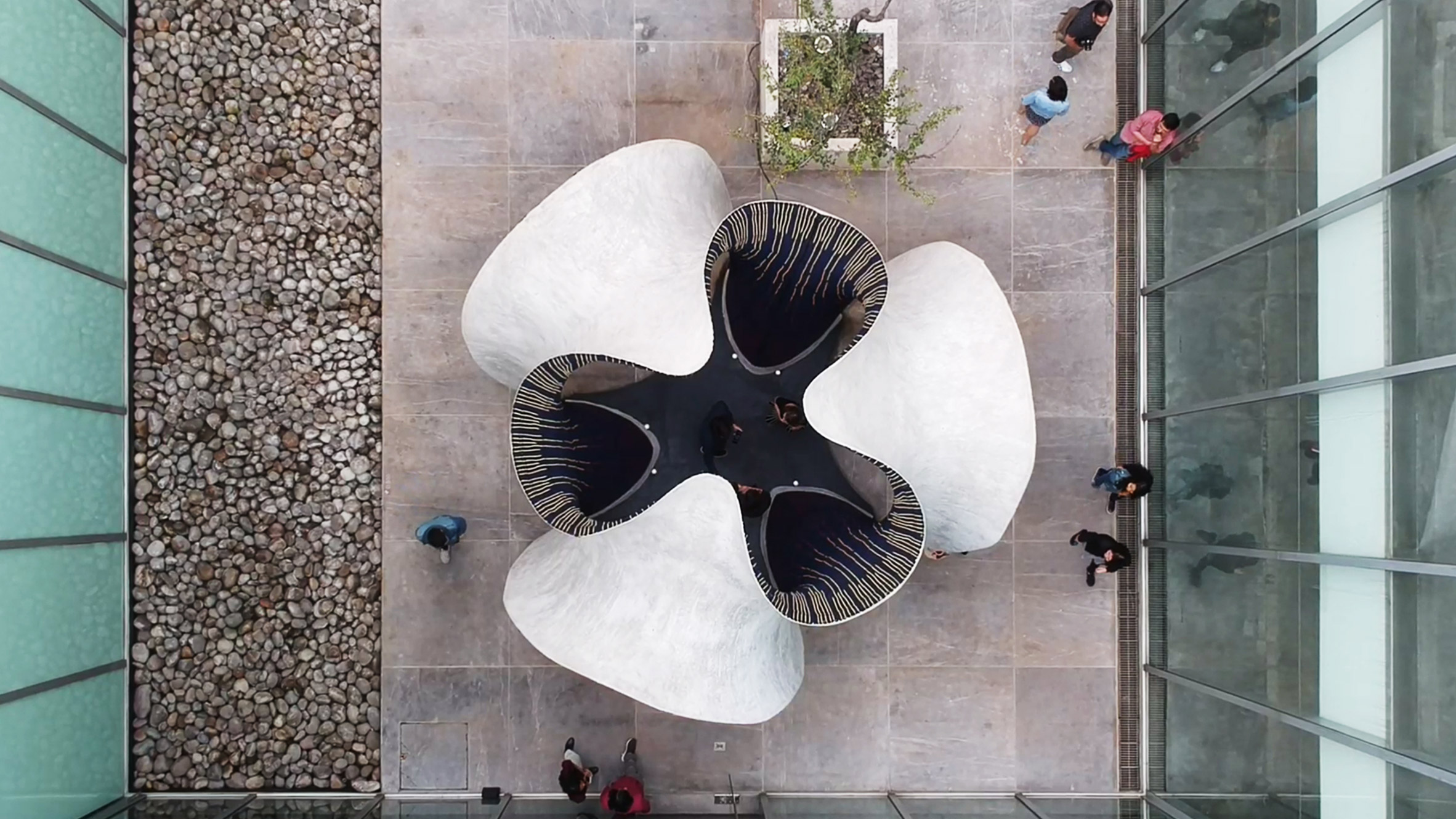 Other recent construction innovations from Swiss university ETH Zurich include a concrete ceiling made using a 3D sand-printing process, and metal facade made from a 3D-printed mould shaped like the folds of a brain. ZHA has created a stone and carbon fibre version of Danish designer Hans J Wegner’s 1963 CH07 lounge chair.