The Williamsburg Hotel – named after its neighbourhood in Brooklyn – is opening in phases from January 2017 and is set to be finished later this year. 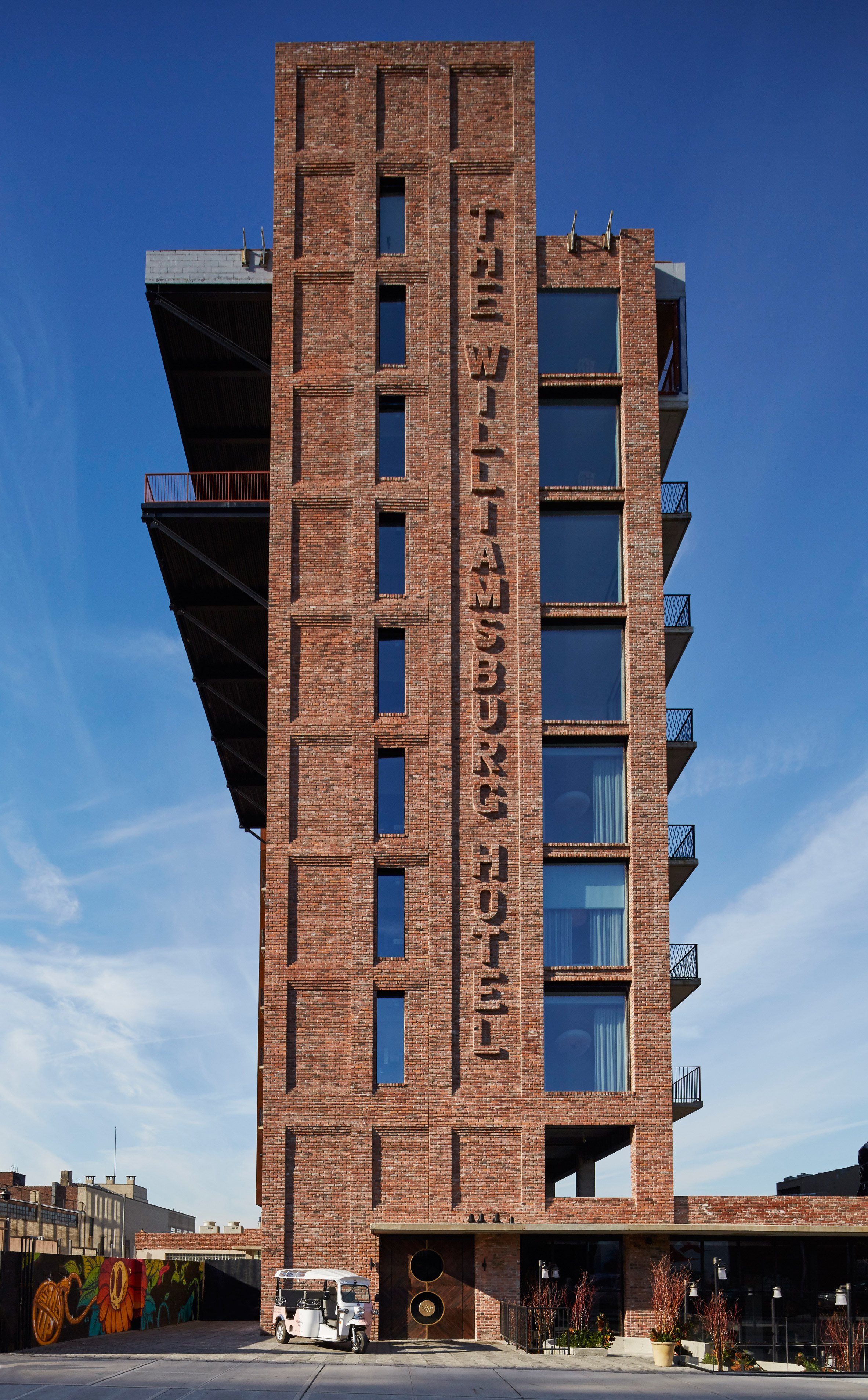 The building on the corner of Wythe Avenue and North 10th Street sits slightly below ground level. A terrace leads down from the road to the hotel’s entrance in the basement.

The stepped garden features wall art by local artists, and introduces a circular motif found across the building through oval shaped nooks lined with cushioned seating for summer leisure. 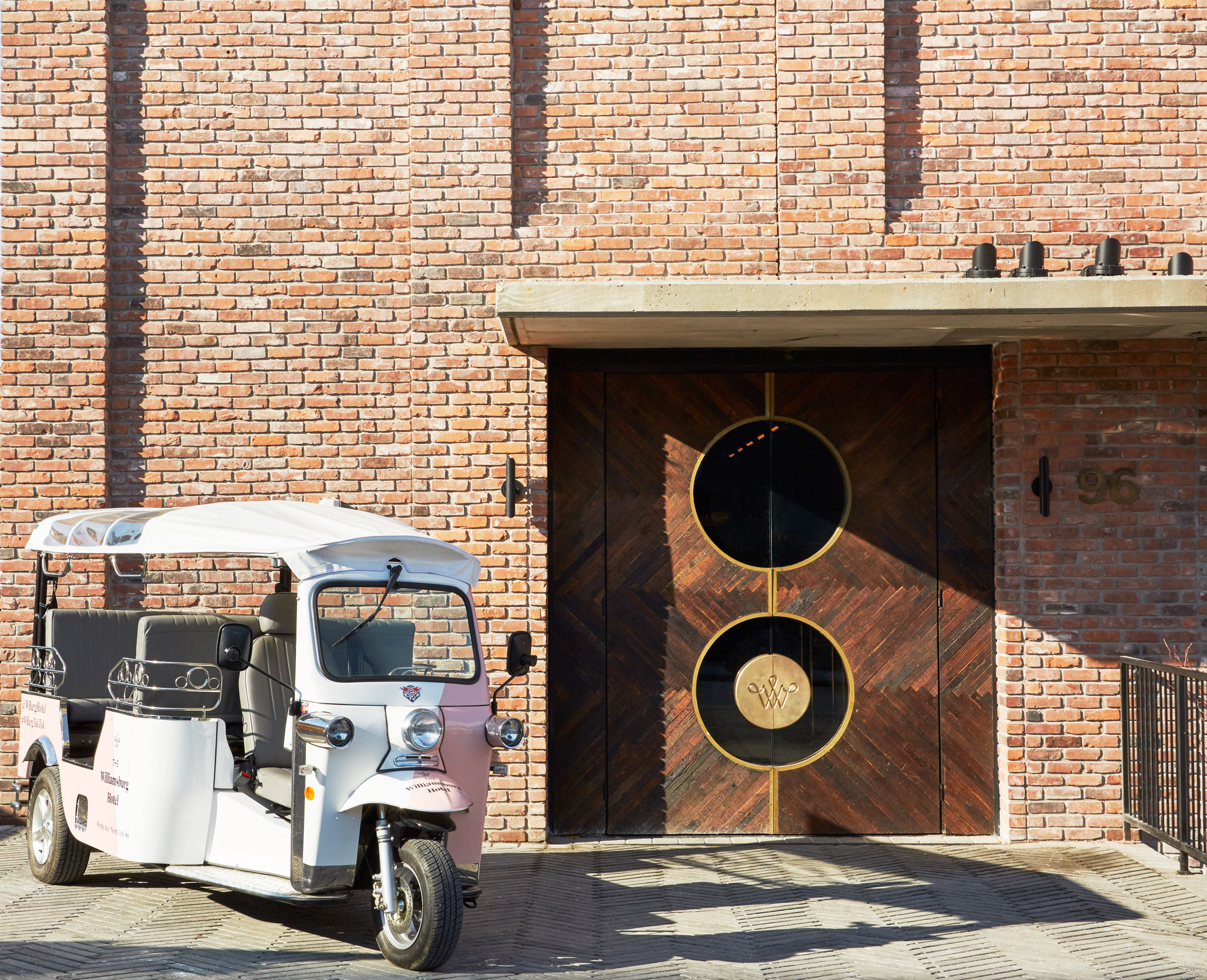 The building opens onto a bar, flooded by light from generous windows looking out onto the terrace.

Intending to evoke the neighbourhood’s industrial roots, the architects decked the floors in faded wood, and exposed the ceiling services and brick walls. The bar itself serves as the space’s centrepiece. Hanging above the counter and tracing its perimeter, an installation by local street artist Eric Reiger is made up of thousands of different coloured threads.

Just past the lounge, the architects have planned a restaurant set to open later this year. They describe the space as “full of bold colours and intricate mosaic flooring, lit with a mix of candles and beautiful light fittings”.

Towards the rear, the cellar floor descends to a recessed space, where a 30-feet-high (nine-metre) grand ballroom is designed to “reflect the derelict buildings of Detroit but add in a modern insertion”.

Glazing framed by steel arches opposite the entrance dominates the space, which is also yet to complete. Backlit and winged by velvet drapes, the fixtures will lend the space the impression of daylight.

Staircases in the back corners of the room will curve up to a red-carpeted mezzanine around the perimeter.

Situated to the left of the cellar bar, a low-ceilinged lobby contrasts with the bright, expansive rooms. Warm lighting, a mid-toned wood reception desk and wall units, as well as gold accents and pops of red, make up a cosy space. 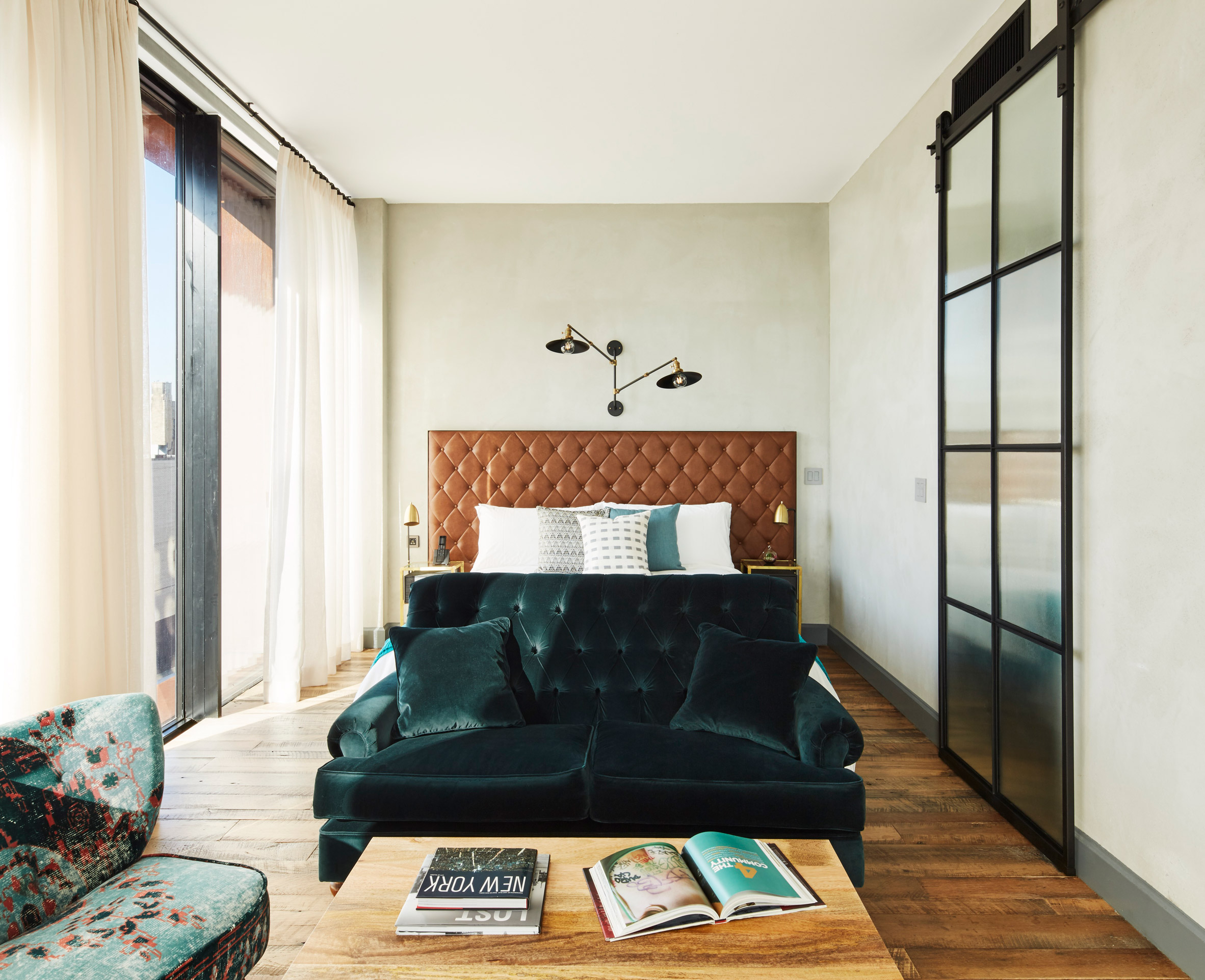 The guest rooms occupying the nine storeys above were individually designed by the architects. In one, shades of green dominate a rectangular room with pastel walls and contrasting shamrock upholstery, while another room introduces a subdued scheme of grey walls with dark accents.

Although the style of the rooms differs, the architects used a consistent collection of tailor-made furniture. “Each room at the hotel features a range of bespoke furniture designed by Michaelis Boyd in collaboration with the London-based Bill Amberg Studio, which is known for pushing the boundaries of leather-working in new directions,” said the firm.

Floor-to-ceiling glazing also features in every room, framing views ranging from the towering Manhattan skyline to the low sprawl of Brooklyn. 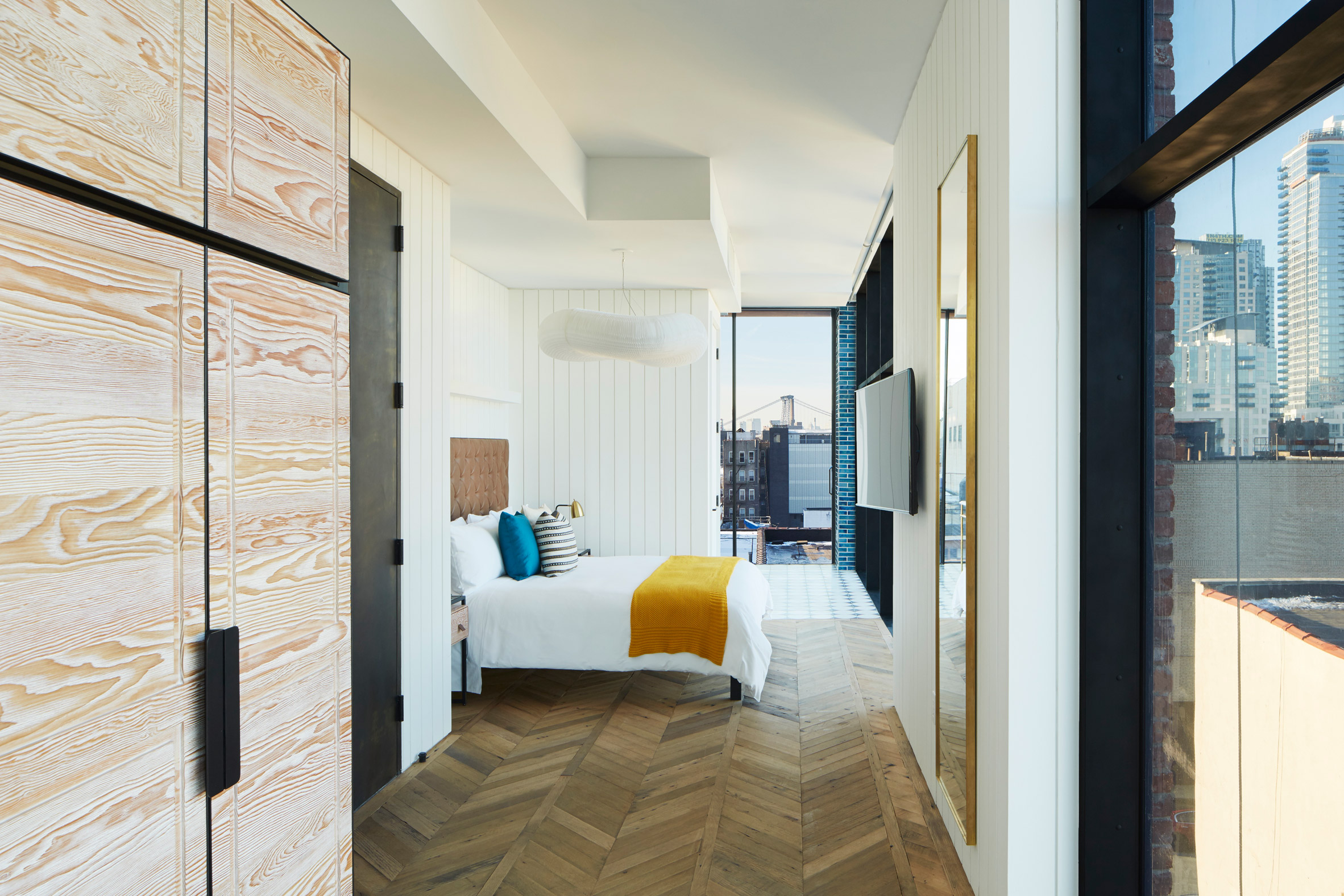 Crowning the hotel, a rooftop cafe is set to be completed later this year. A curving garden and a 12-metre pool will stretch across from the dining space.

In reference to the many water towers that were once scattered Williamsburg, the architects have planned to erect one of their own on the hotel’s roof – complete with a bar offering sweeping vistas of the surrounding city through wide apertures. 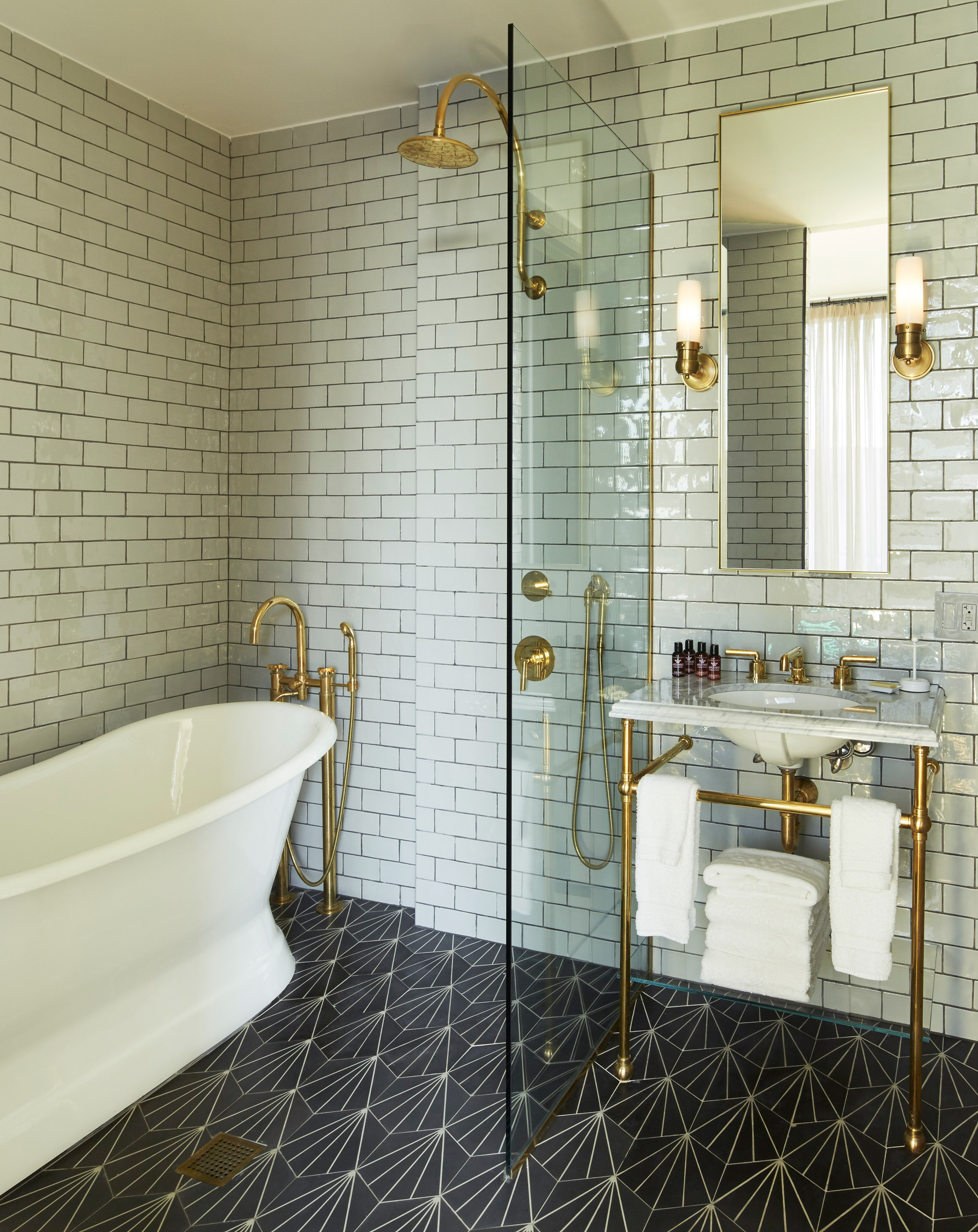 “The Watertower Bar will be constructed of charred timber boards externally and steel panels internally, and will incorporate a series of coloured glazed panels to bring in shards of coloured light into this double height space,” Michaelis Boyd said.

“The bar will have large, glazed openings around the perimeter of the ground floor, raised 136 feet (41 metres) above Williamsburg with panoramic views of Manhattan.” 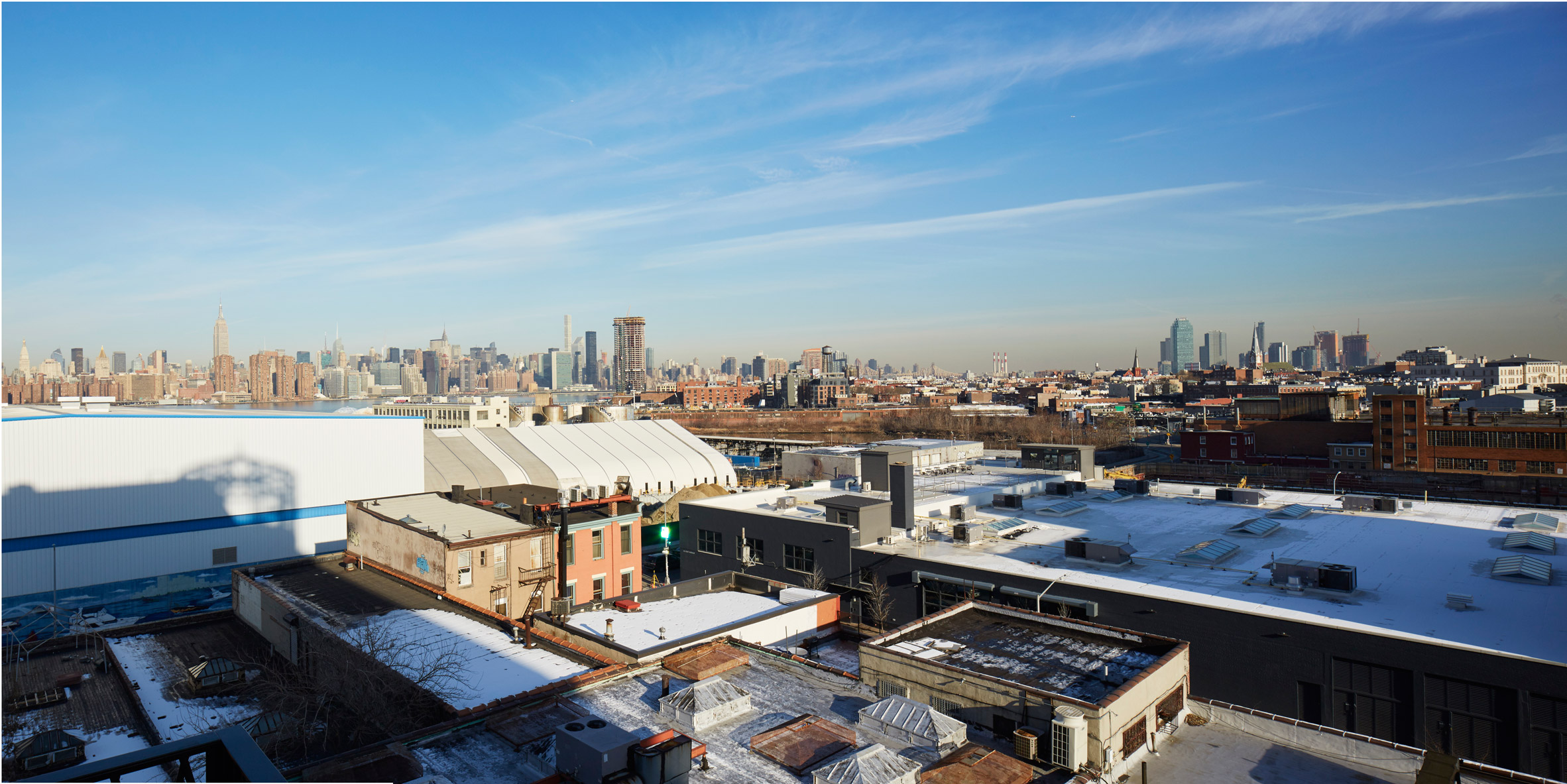 Brooklyn has seen a steady boom in development over the past decade. Other recent large-scale project in the borough include James Corner Field Operations’ conversion of Williamsburg’s Domino Sugar Factory site into a six-acre park, and Herzog & de Meuron’s planned transformation of the nearby “batcave” into creative hub.

Michaelis Boyd has also been involved in high-end hospitality projects like Soho Farmhouse in the English countryside, and a boutique safari lodge in Botswana.

Photography is by Annie Schlechter. The post The Williamsburg Hotel by Michaelis Boyd welcomes guests as part of phased opening appeared first on Dezeen.