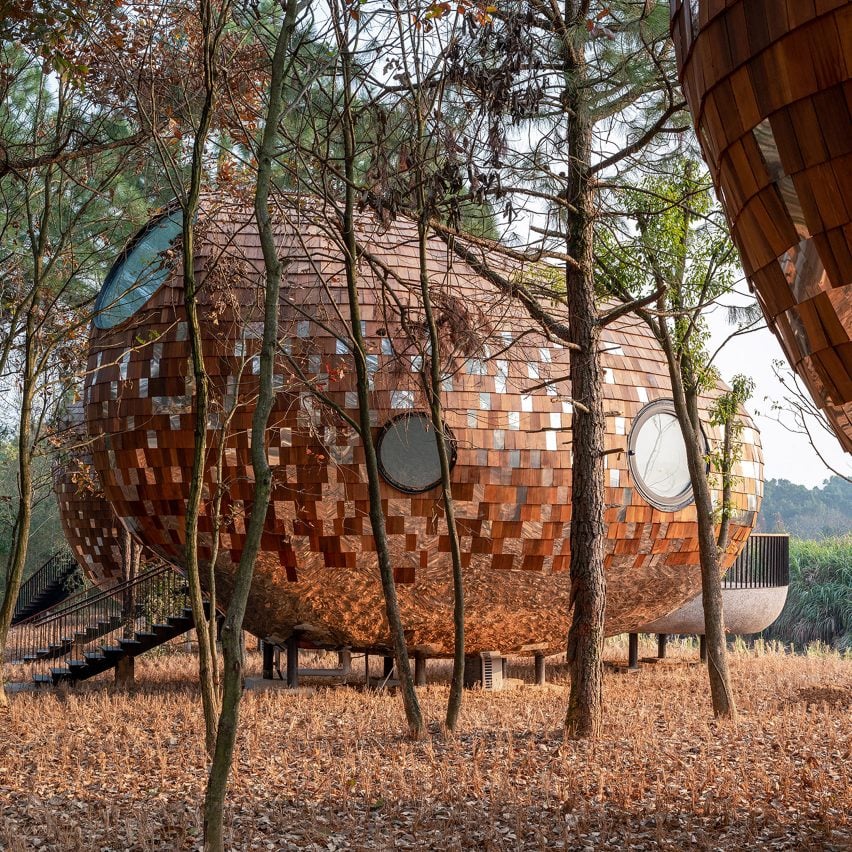 ZJJZ Atelier has completed a cluster of ellipsoidal holiday cabins for a woodland hotel in Jiangxi, China, which are wrapped in wooden shingles and mirrored aluminium tiles.

Shanghai studio ZJJZ Atelier designed the buildings for the Tree Wow hotel, which specified that the pods should be inspired by natural forms to echo their scenic surroundings.

It is the second project the studio has designed for the complex, with the other being The Mushroom guesthouse that has a large conical roof.

According to the architects, the design of The Seeds was based on the functional demands of the buildings, rather than a direct attempt to copy a particular natural shape.

“Instead of creating merely imitative forms, we focused on developing the spatial experience by staging views and establishing the relationship between the structures and their surrounding environment,” explained ZJJZ Atelier.

The resulting pod-like buildings feature rounded forms wrapped in pine shingles and punctured by circular openings. Their organic shapes led to them being named The Seeds.

The pine shingles are applied across most of the exterior surfaces, except for the undersides of the pods, which are clad in shiny aluminium tiles.

The aluminium tiles reflect the surroundings and alter the appearance of the buildings throughout the seasons as the weather and the colours of the landscape change.

“Like the roots of a plant, this reflective cladding anchors each house to the earth,” the architects said, “while the pine shingles give the structures a warm, soft aesthetic, allowing them to blend into the surrounding nature.”

Each of the four Seeds is raised above the ground on stilts and accessed via an external staircase. Inside, the pods contain a bedroom, bathroom, storage area and an attic space for lounging.

Round windows inserted into the surfaces of each pod have been arranged to provide specific views of the surroundings. Smaller windows at the side look onto the adjacent woodland, while a bigger opening in the attic frames a view of the treetops and the sky.

At the front, the largest of the openings contains doors that open onto a circular terrace. The terraces are supported by independent pillars and one of their decks is punctured by a hole with a tree growing through it.

Internally, The Seeds are lined with wooden boards that follow the flowing shapes of the external shells. The different tones of the wood accentuate the sweeping curves of the non-linear surfaces.

The main space in each pod contains a bed, a bathtub and a lounge chair looking out onto the terrace. Curved openings in a wall behind the bed provide access to the entrance, along with a bathroom and storage space.

A staircase next to the entrance ascends to an attic lounge that overlooks the living space below. The oculus window floods this space with daylight, as well as providing a view out from the low sofa.

ZJJZ Atelier was established in 2017 and has worked on several hotel and hospitality projects, including a hotel comprising wooden cabins scattered across a mountainside in Guizhou Province and a bar and restaurant in the same region that can be opened up to immerse guests in the mountain scenery.

Photography is by Tian Fangfang unless stated.

The post The Seeds are a group of shingle-clad pods nestled in a Chinese forest appeared first on Dezeen.