The main living areas of this compact holiday home near New Zealand‘s Kaipara Harbour are arranged perpendicular to a platform that provides space for three tents used to accommodate guests. Yale School of Architecture professor Peggy Deamer often works in nearby Auckland and wanted to build herself a simple and affordable rural retreat that was easily reachable from the city. 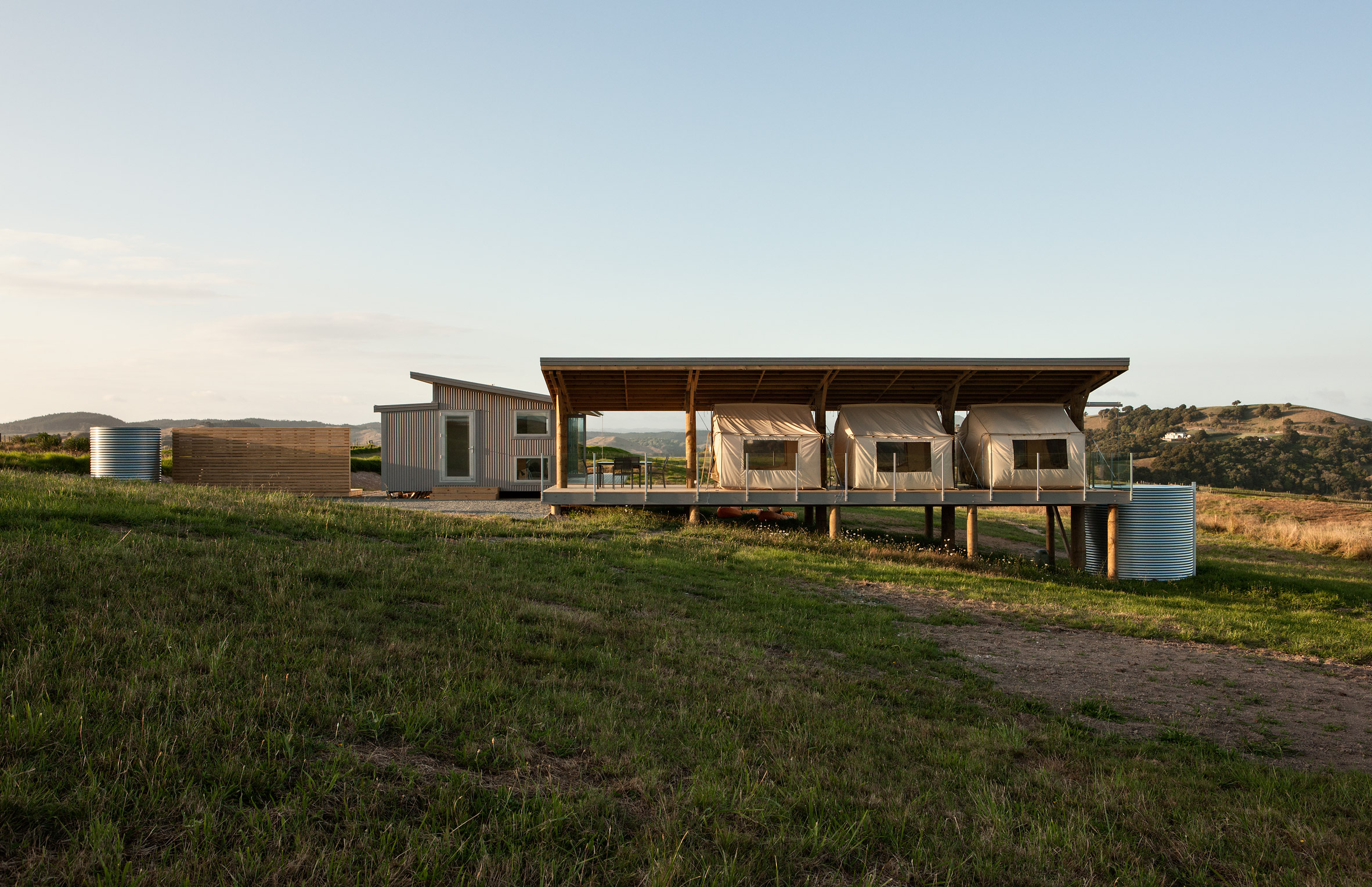 When cycling around the Kaiwaka area one weekend she came across an ideal plot and decided to develop a design informed by the common practice of New Zealanders visiting and camping at the summer houses of their friends. “I have very little disposable income so this [house] needed to be as modest as possible,” explained Deamer.

“I could only afford a ‘shed’ with one bedroom, but wanted to make sure that friends and family could visit. The solution was to build a platform that could hold three tents that would be the guest bedrooms.”

The main part of the house features a straightforward mono-pitched form influenced by a prefab property that Deamer almost decided to buy and install on the site. “In the end, I designed my own house,” the architect told Dezeen, “but the efficiency and appropriate quality of the one I almost bought stayed with me; the core side being on the uphill, windy side, with the open side facing the view.”

The building’s layout accommodates a dining area, living room and bedroom arranged in a row, with bathrooms, kitchen and storage aligned in an adjoining parallel service pod. 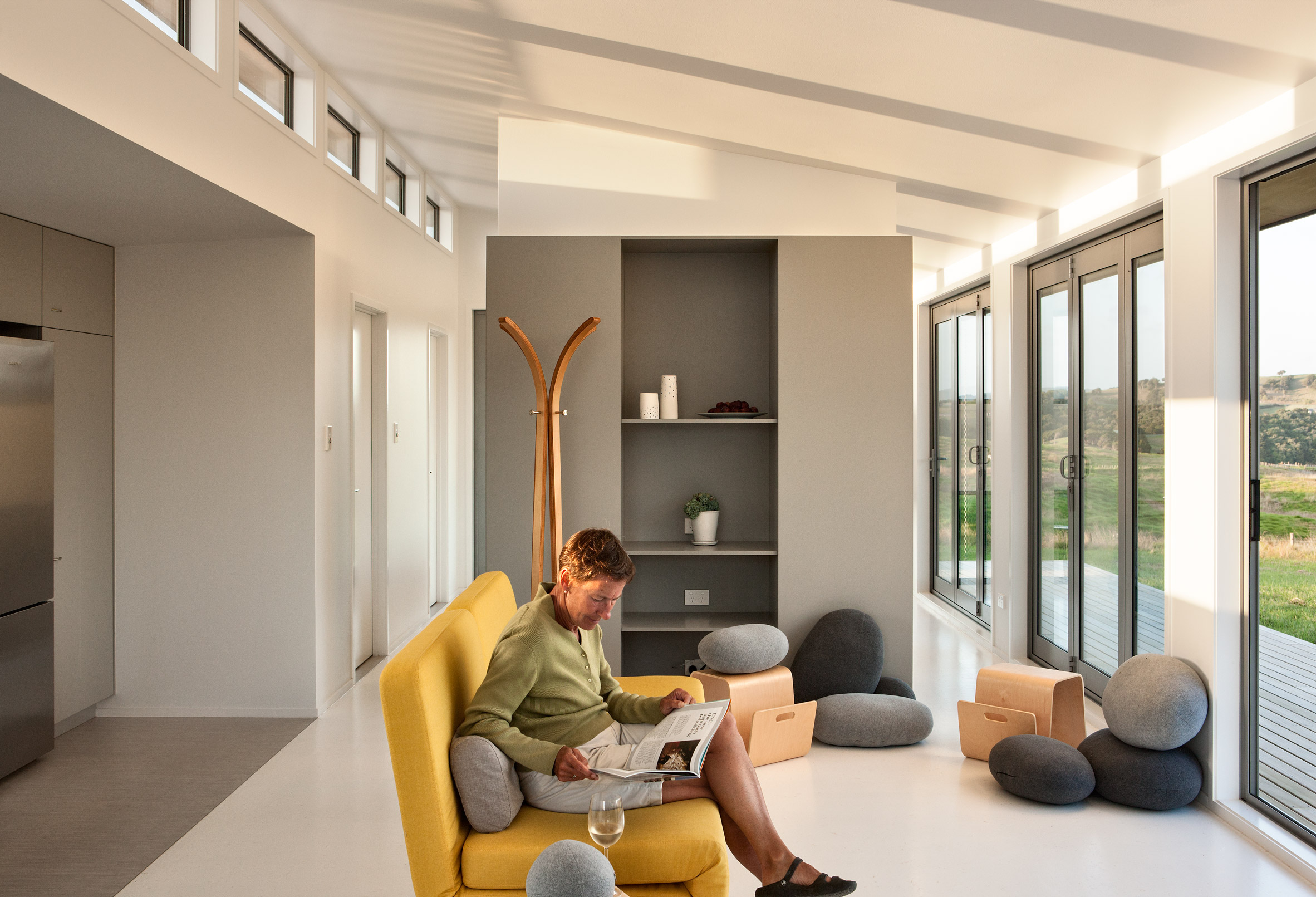 Standardised materials including the corrugated metal cladding were chosen for their affordability and durability, as well as the architect’s desire to reinforce the rural shed typology.

“It was a case of the less bespoke for me, the better,” Deamer added. “If this house was based on the idea that it was a country shed more than a house, there was no need to be lavish or sentimental.” 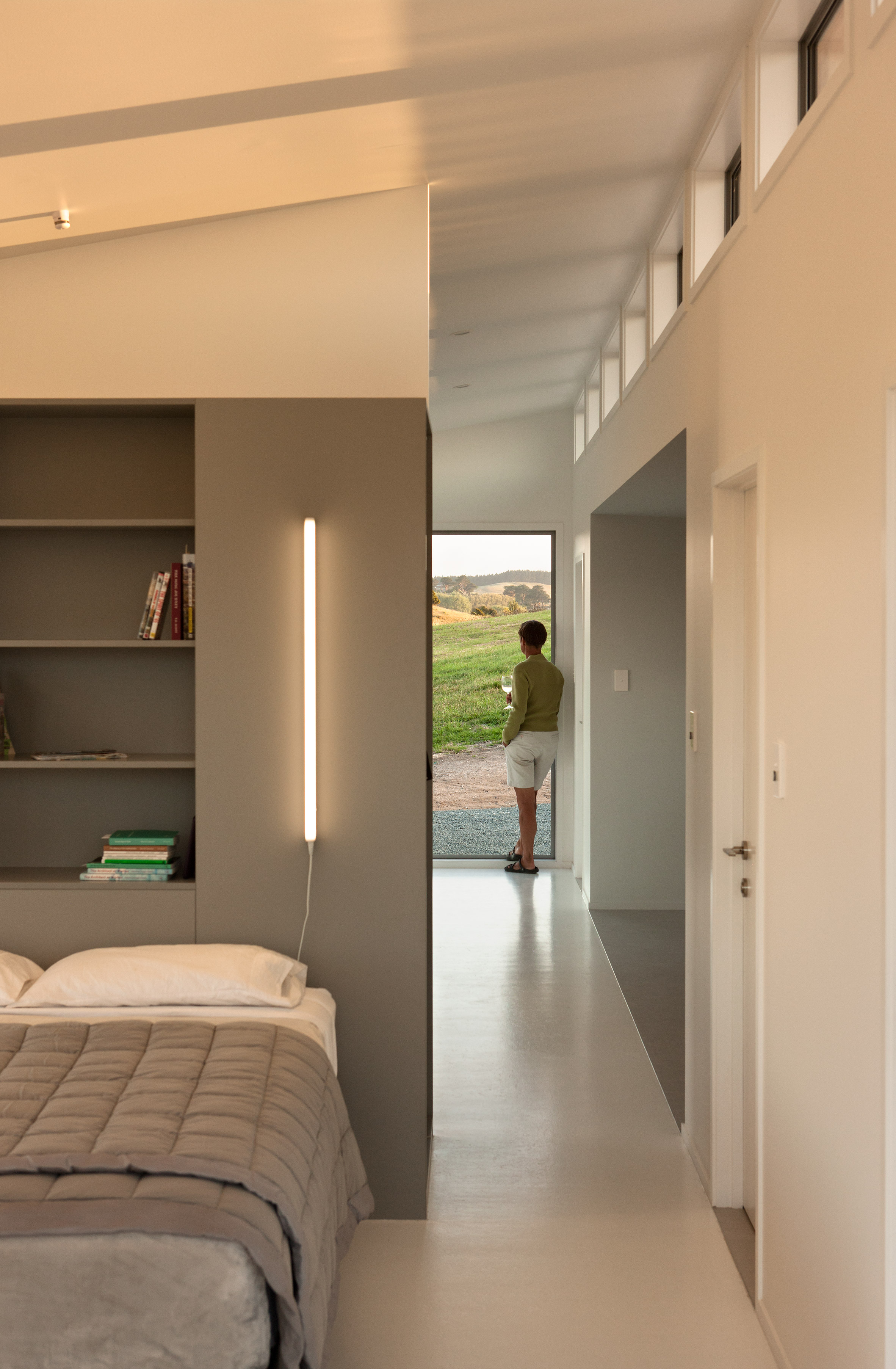 The platform on which the tents are mounted was necessary as there is not enough flat land to pitch them otherwise.

The timber-decked structure is positioned perpendicular to the main house so they both offer panoramic views towards the nearby harbour. 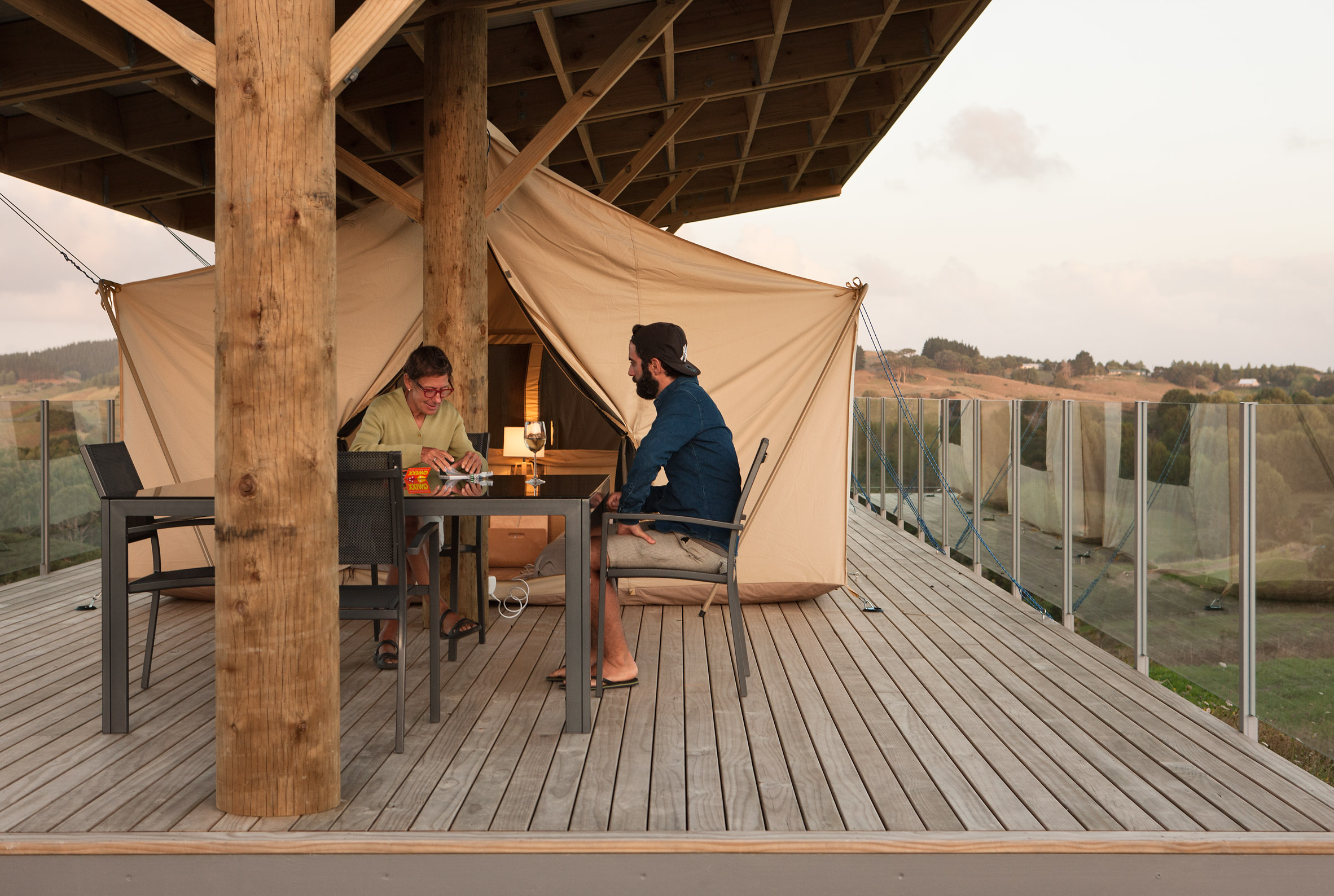 Deamer sourced the canvas tents from the USA during the design process and chose them for their simplicity and affordability.

Each tent can accommodate two or three single beds and is tall enough to stand in. When not in use, they can easily be broken down and removed so the platform can become a sun deck. 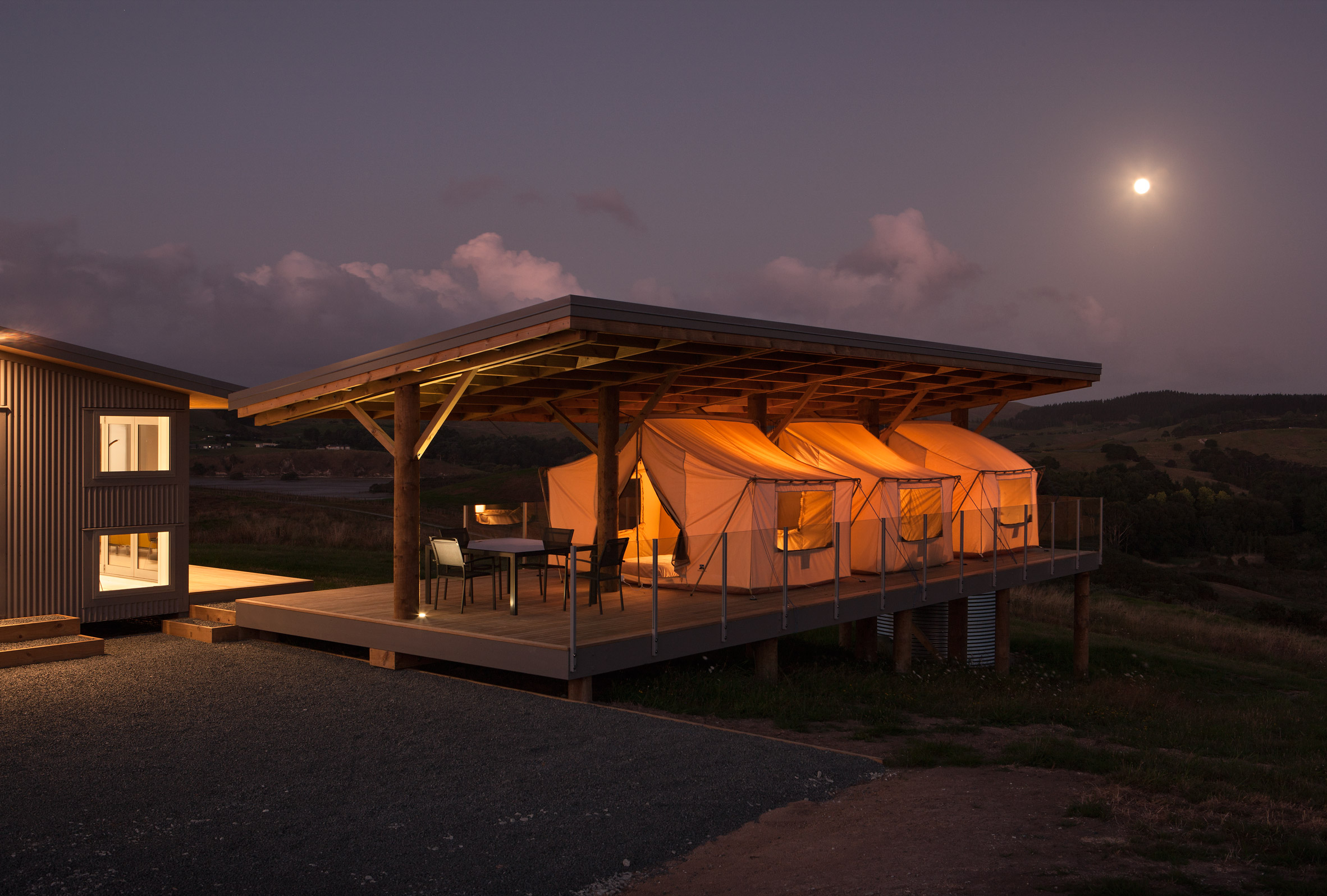 “The tents make a one-bedroom house into a four-bedroom house when needed,” said Deamer. “I didn’t want guests in the tents to feel they are in camping tents, but rather in a real room.”

A large cylindrical corrugated tank at the lowest part of the site contains water that runs off from the building’s roofs, while a smaller tank positioned alongside the main house was adapted for use as storage. Such tanks are a common feature on properties in the area. Rather than the standard concrete or plastic options, Deamer chose a product that she feels adds an attractive detail to the scheme.