The Pavilia Bay is the first residential project designed by Briand, a yacht racer who has designed thousands of vessels for his marine architecture company Vitruvius Yachts. 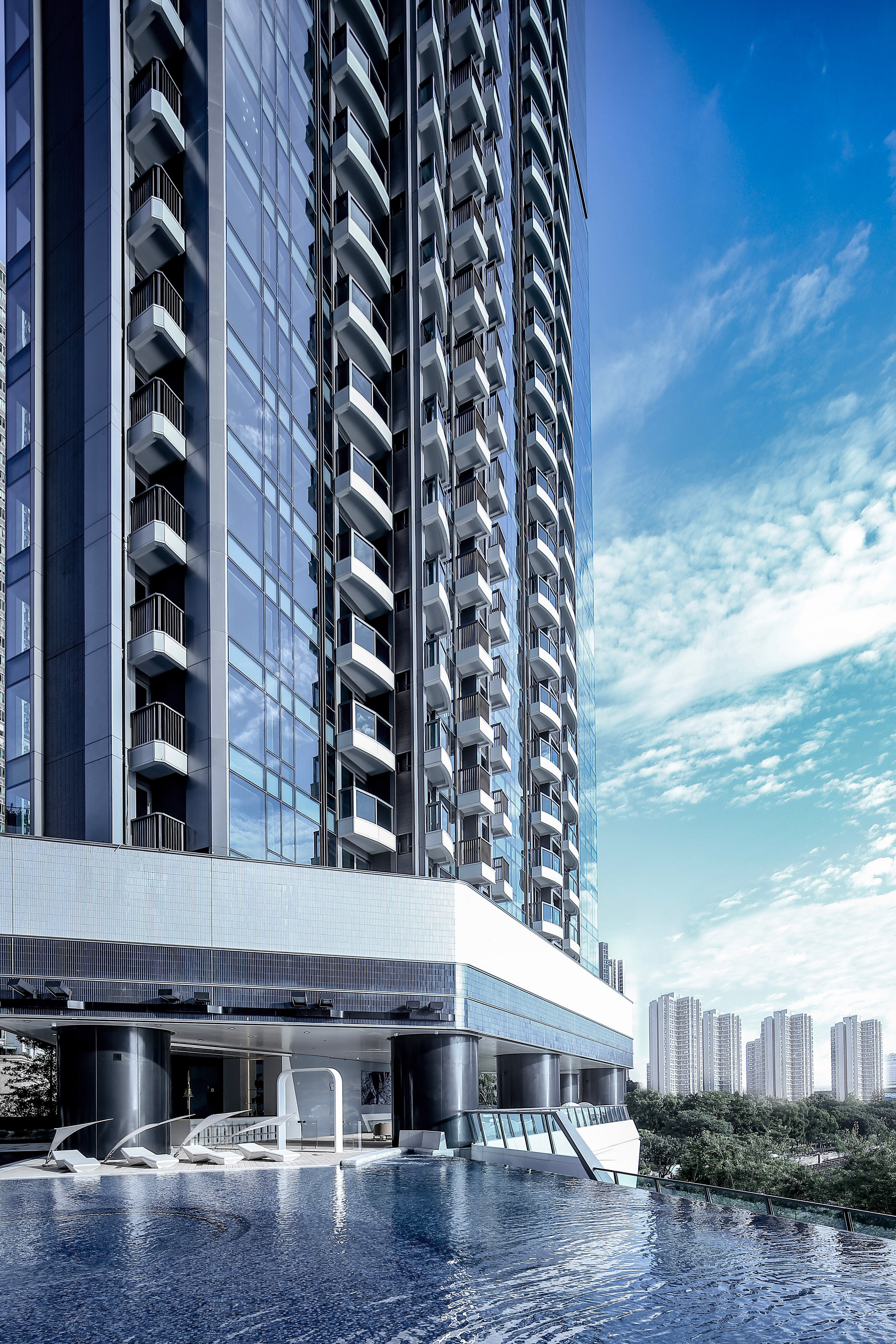 Connected by a podium, the two towers of the building are designed to evoke the mast of a yacht under full sail. Naval architectural elements are found throughout the waterfront development, with communal areas decked out in a style more likely to be found on a luxury yacht.

Interiors evoking the glamour of contemporary cruising were chosen to help create a “stay-cation ambience” for the residents without them ever having to leave dry land. 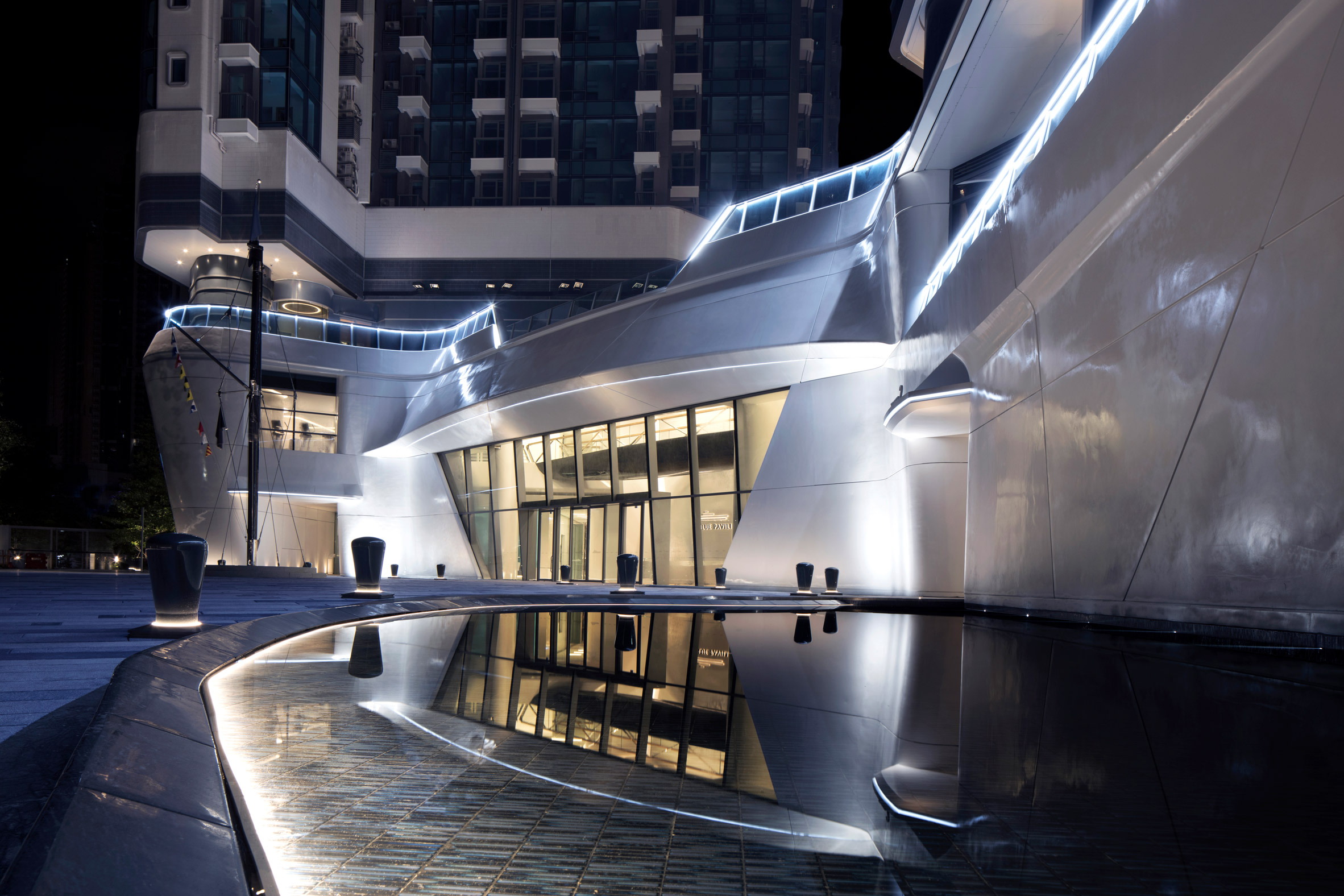 The podium facade is constructed from 75 tons of steel, with 650 plates welded together like the hull of a yacht. According to the developers, the “superfine” fabrication of the bespoke steel plates and the individual welding are among many artisanal touches that the project features.

Lights surrounding the podium are designed to create the illusion of being lit from underwater, with railings on the upper levels lit up like those on a yacht. Meanwhile walking alongside the podium is intended to feel like striding towards a docking superyacht. 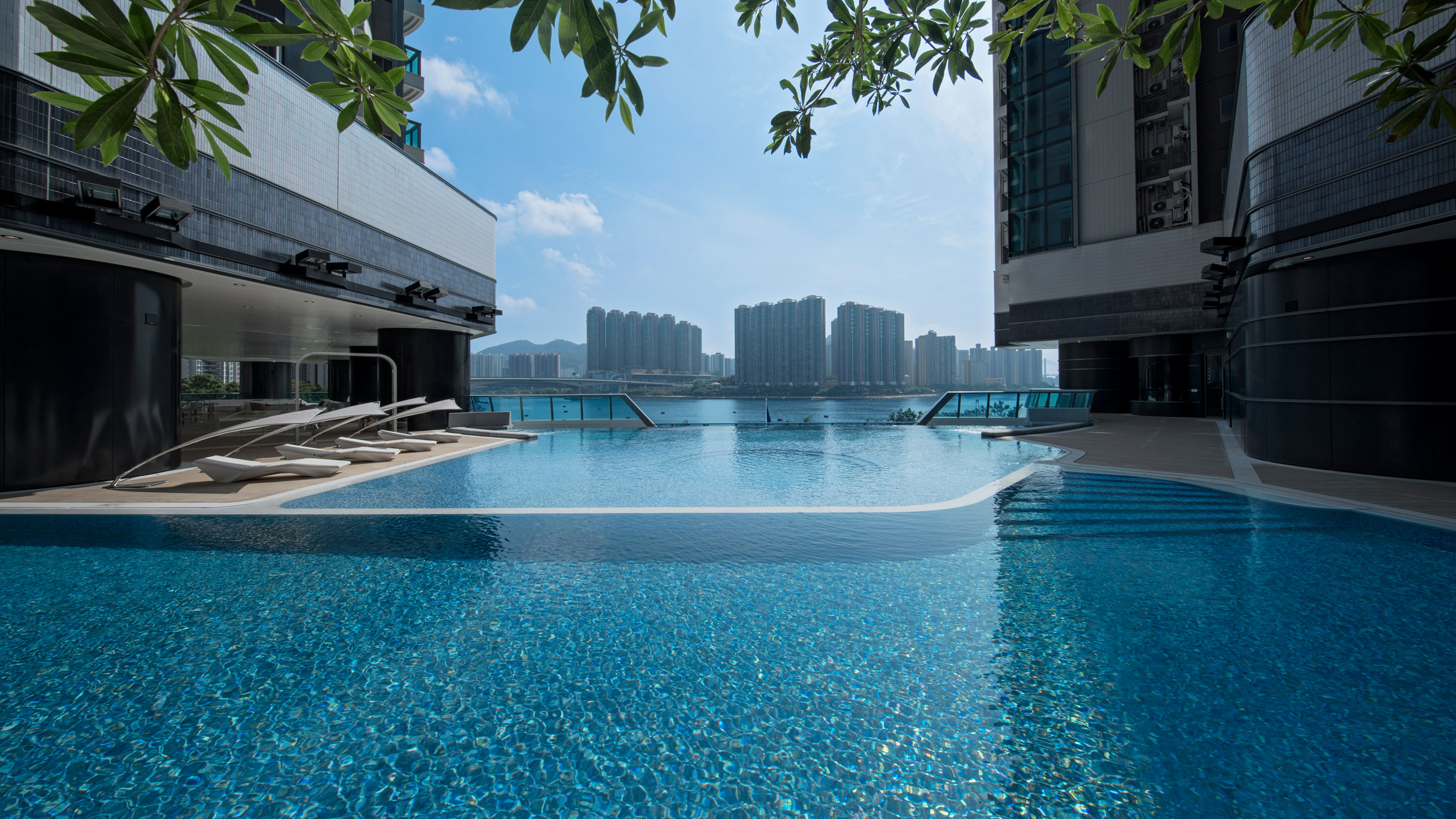 Blue Pavilion, the residents’ clubhouse, has custom-built specialised decking of the kind normally used in superyachts and imported from the Netherlands.

It’s non-slip qualities are particularly appropriate for the area around the infinity pool, which offers panoramic views out over the Rambler Channel. 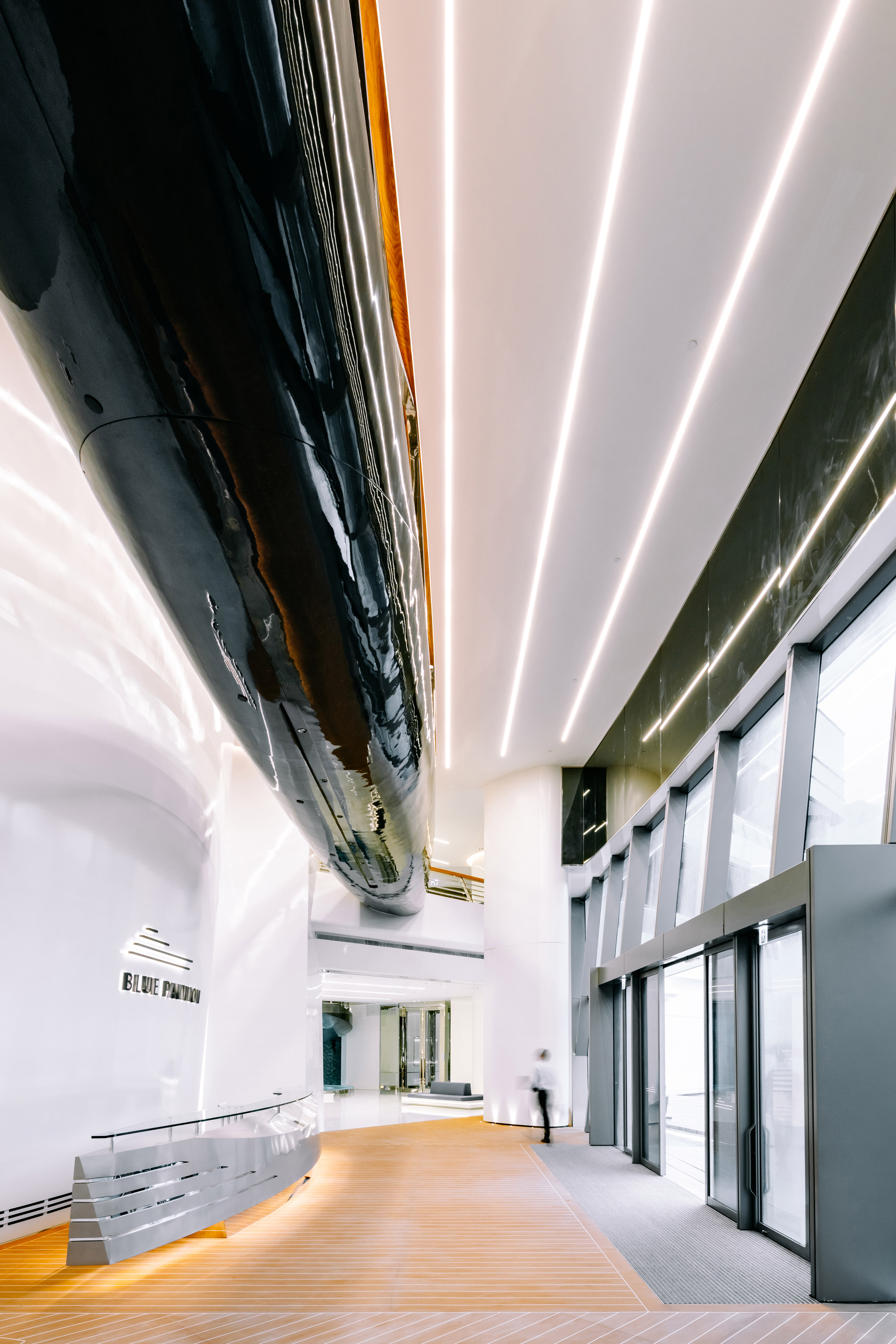 Carbon fibre – a strong and light material prized by boatbuilders, but rarely used in residential projects – has been applied by Briand in the design of The Pavilia Bay.

Multiple complicated steps were required to mould and cast these unique carbon-fibre elements, in a process that took a year and a half to complete. 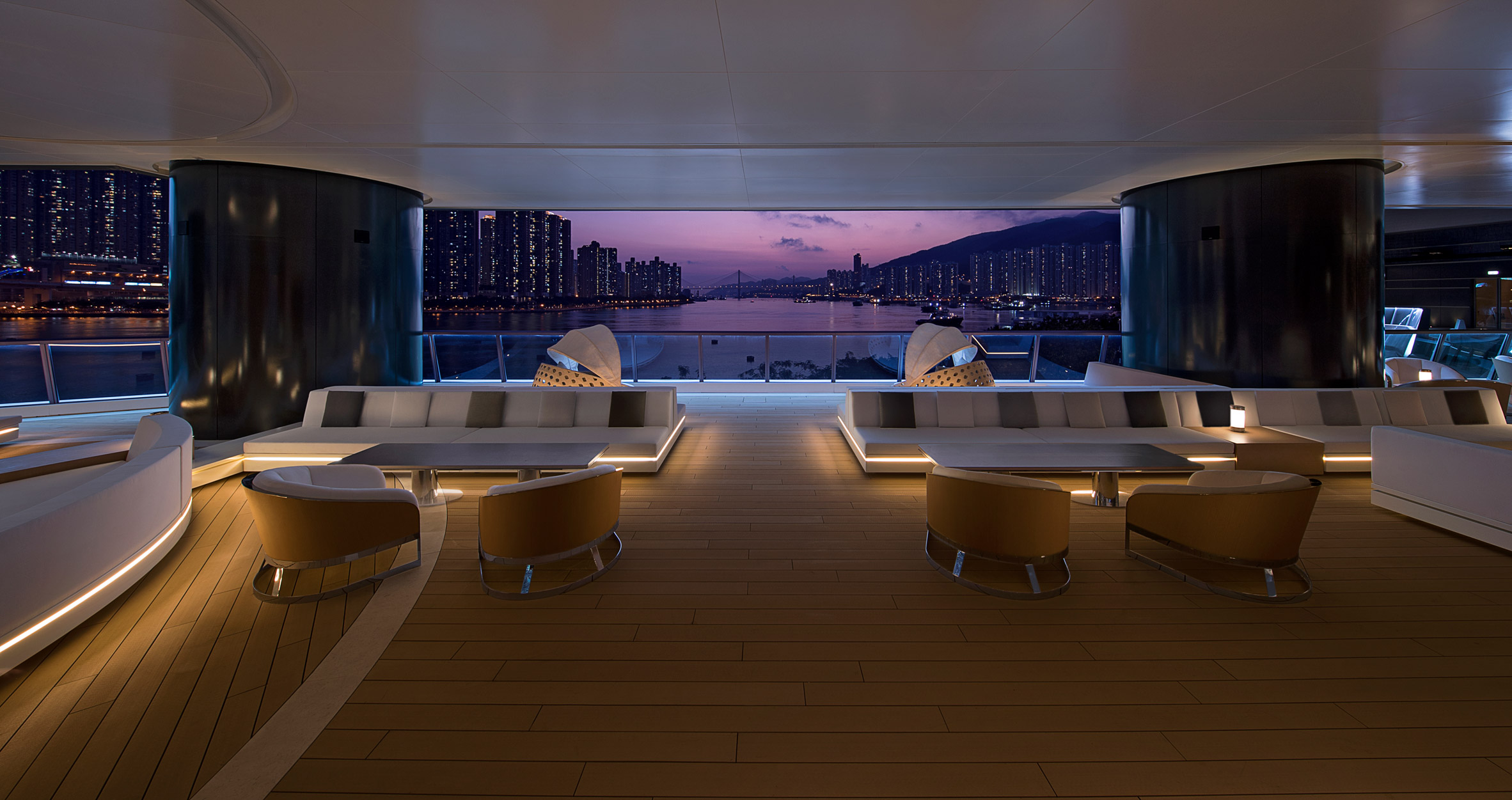 A map of the world, handcrafted by artisans, wraps around the walls of the spiral staircase. The aim is for residents to imagine they are on an “ocean odyssey around the globe at the helm of a superyacht”.

Exclusive models of Briand’s superyachts are on display in the function room, which has glossy white walls and wood veneer dining tables designed to evoke the interior of a luxury vessel. 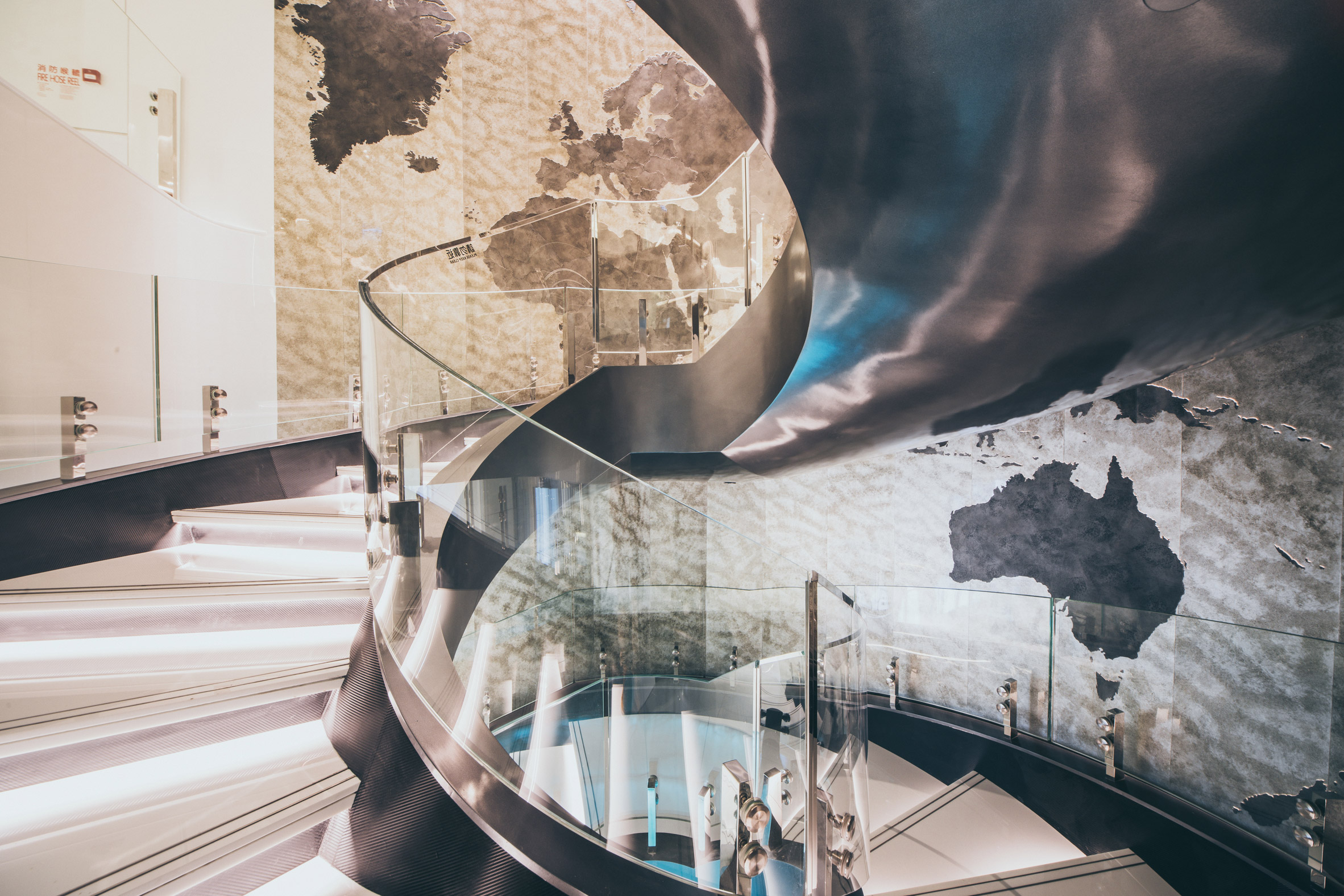 Based in Hong Kong, New World Development was first established in 1970. The company recently completed an apartment tower designed to cater to “urban bohemians” with shared kitchen and dining areas in copper and glossy black tones.

The developer has also worked with Dutch studio Concrete to create a rooftop playground for millennials.