Shanghai-based studio ATAH’s arts centre in the Chinese city of Shaoxing is a glazed cylinder intersected by a spiralling walkway that doubles as a stage.

The studio, founded by architects Guang Xu and Lilas Wang, designed the Heli-stage as the centrepiece of a commercial complex called the China Textile Centre (CTC), which comprises a mix of artistic and commercial spaces at the heart of the Keqiao Science City. 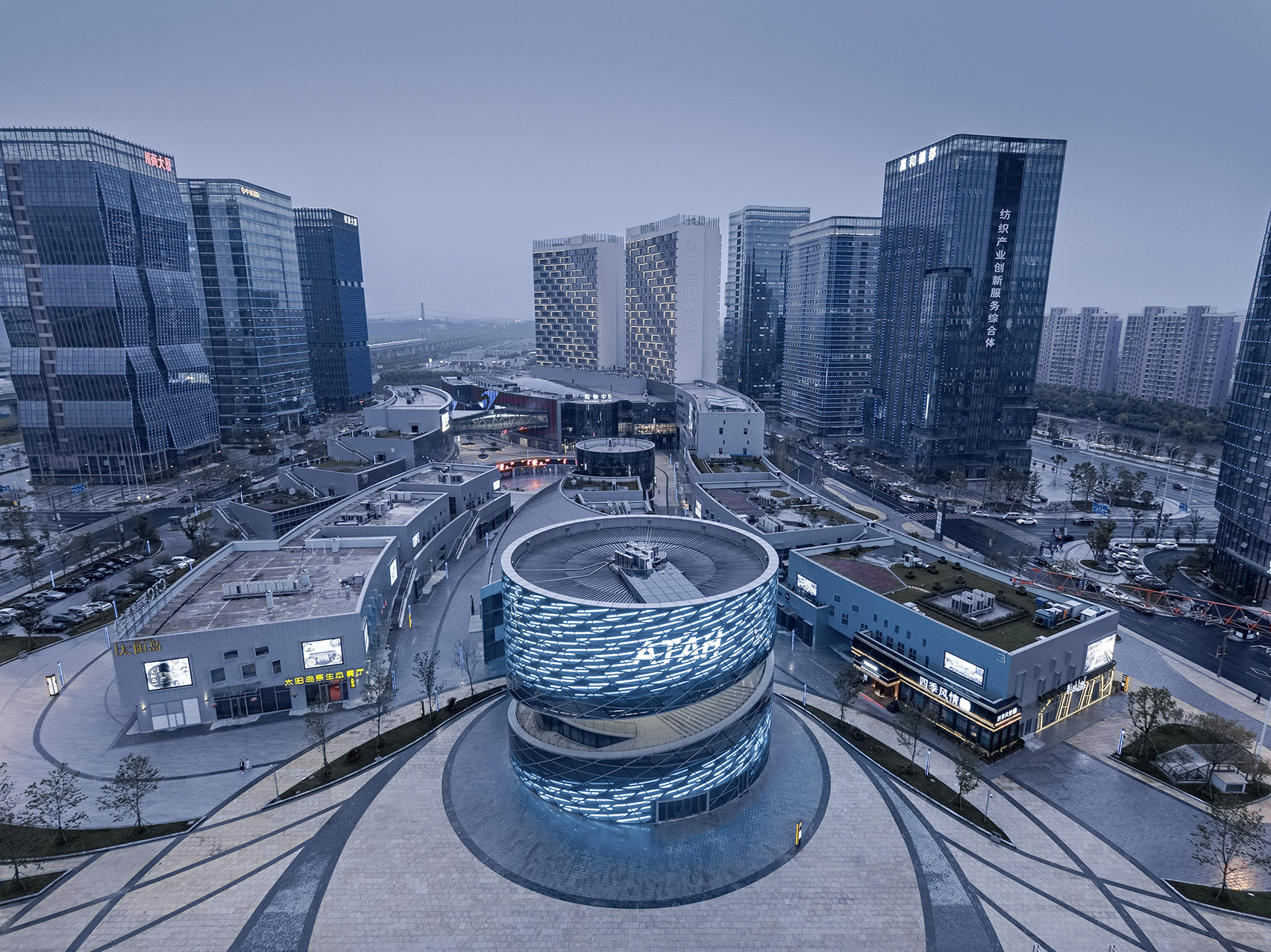 Due in part to its strategic location to the south of the Yangtze River Delta, Keqiao is one of the world’s largest and most important hubs for the production, trade and distribution of textiles.

ATAH was responsible for the masterplan and all design phases of the CTC, which incorporates a shopping mall, offices and serviced apartments connected by a new streetscape. 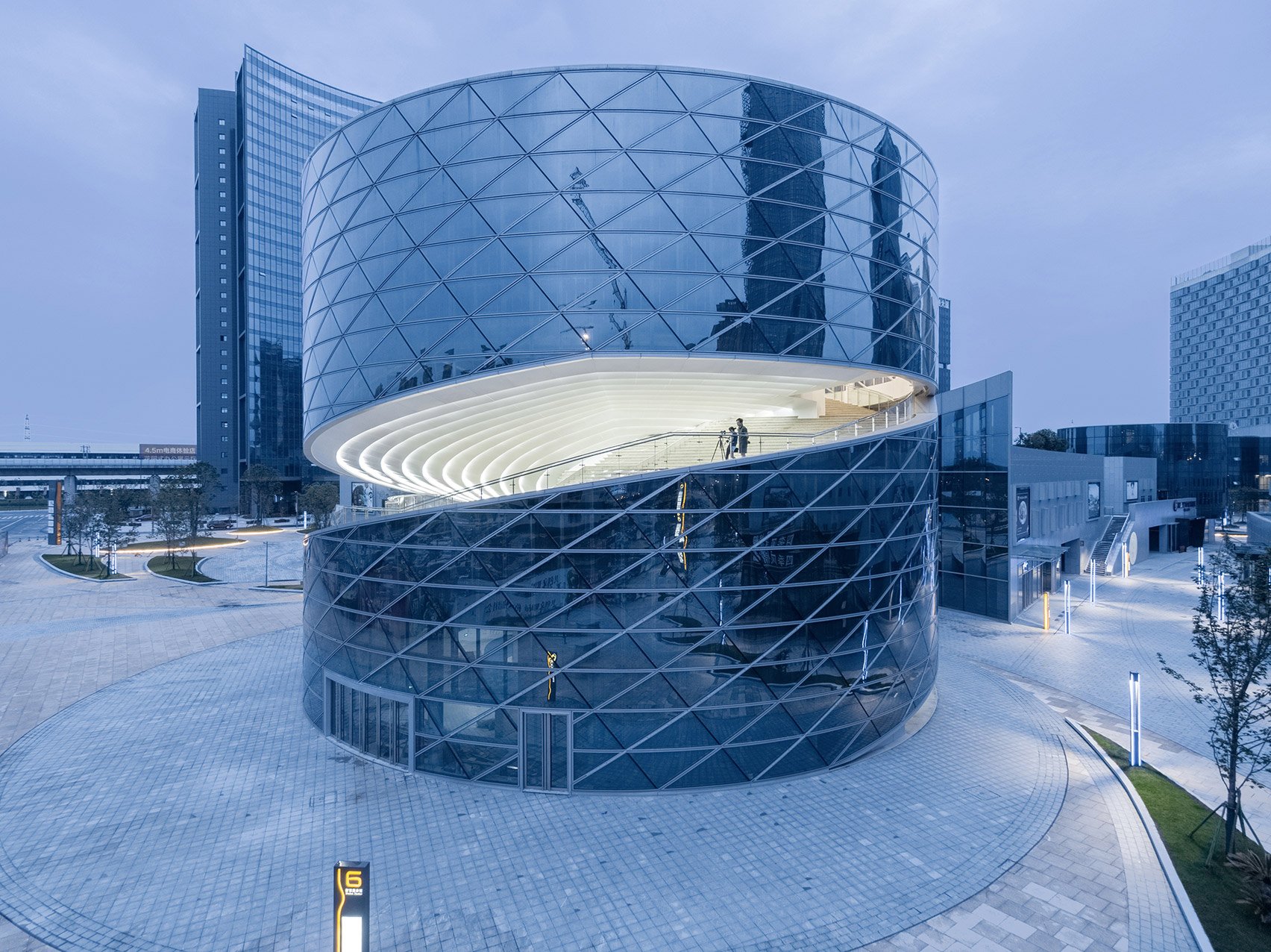 The Heli-stage’s prominent location at the main entrance to the newly developed project demanded a unique and stand-out structure.

ATAH responded with a design that appears to draw visitors towards it thank to the vortex-like layout of the surrounding landscaping. Its cylindrical shape is carved by a spiralling opening to reveal a circulation core that extends up through the centre of the building. 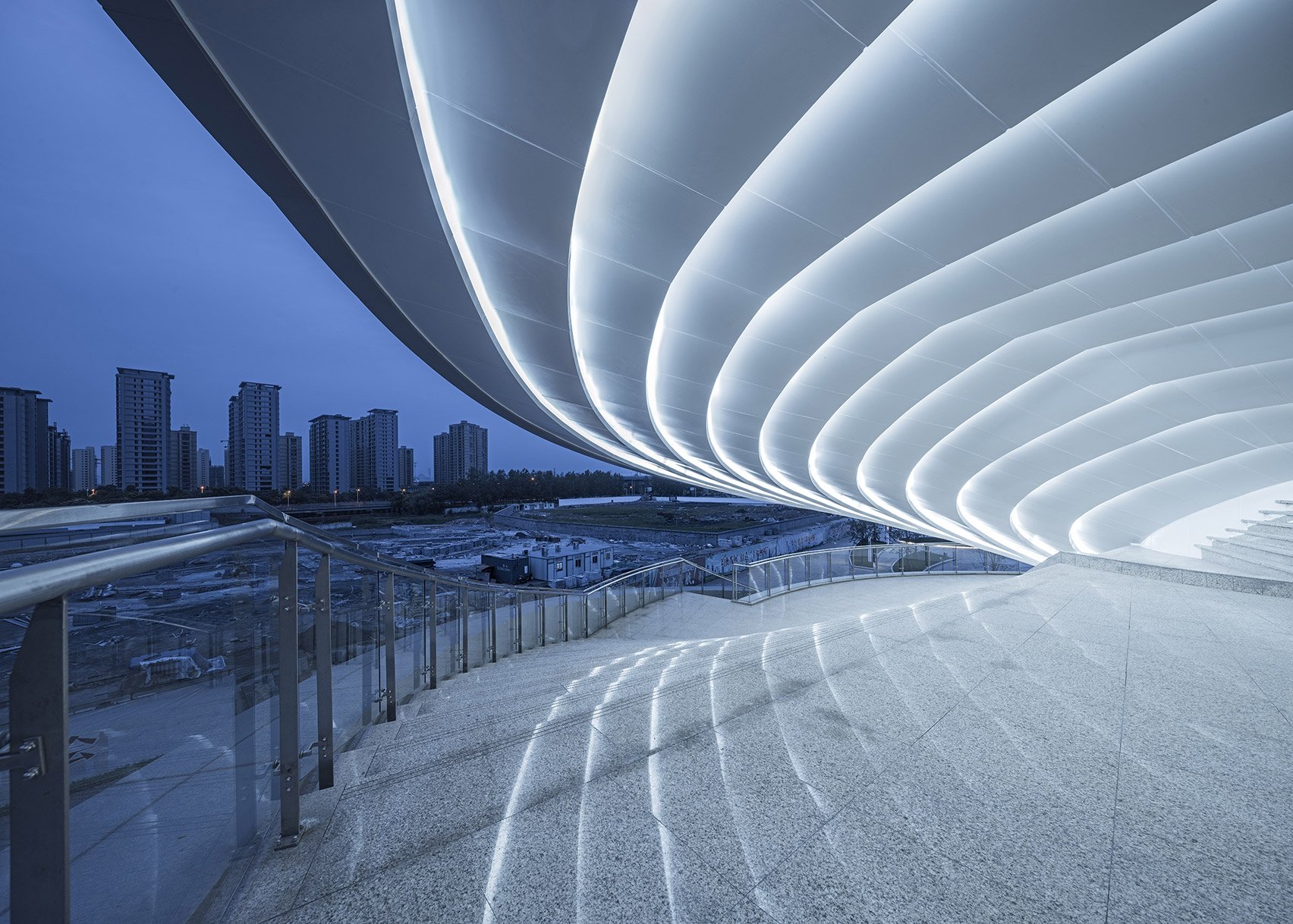 “The design concept involves a spiral form,” said the studio, “blurring the boundary between floors, therefore connecting the exterior space with the interior, creating a continuous exhibition space.”

A staircase that follows the perimeter of the cylindrical structure rises from the ground to gradually connect with the other levels. This outer circulation space can be used for artistic performances, and is visible from across the surrounding plaza. 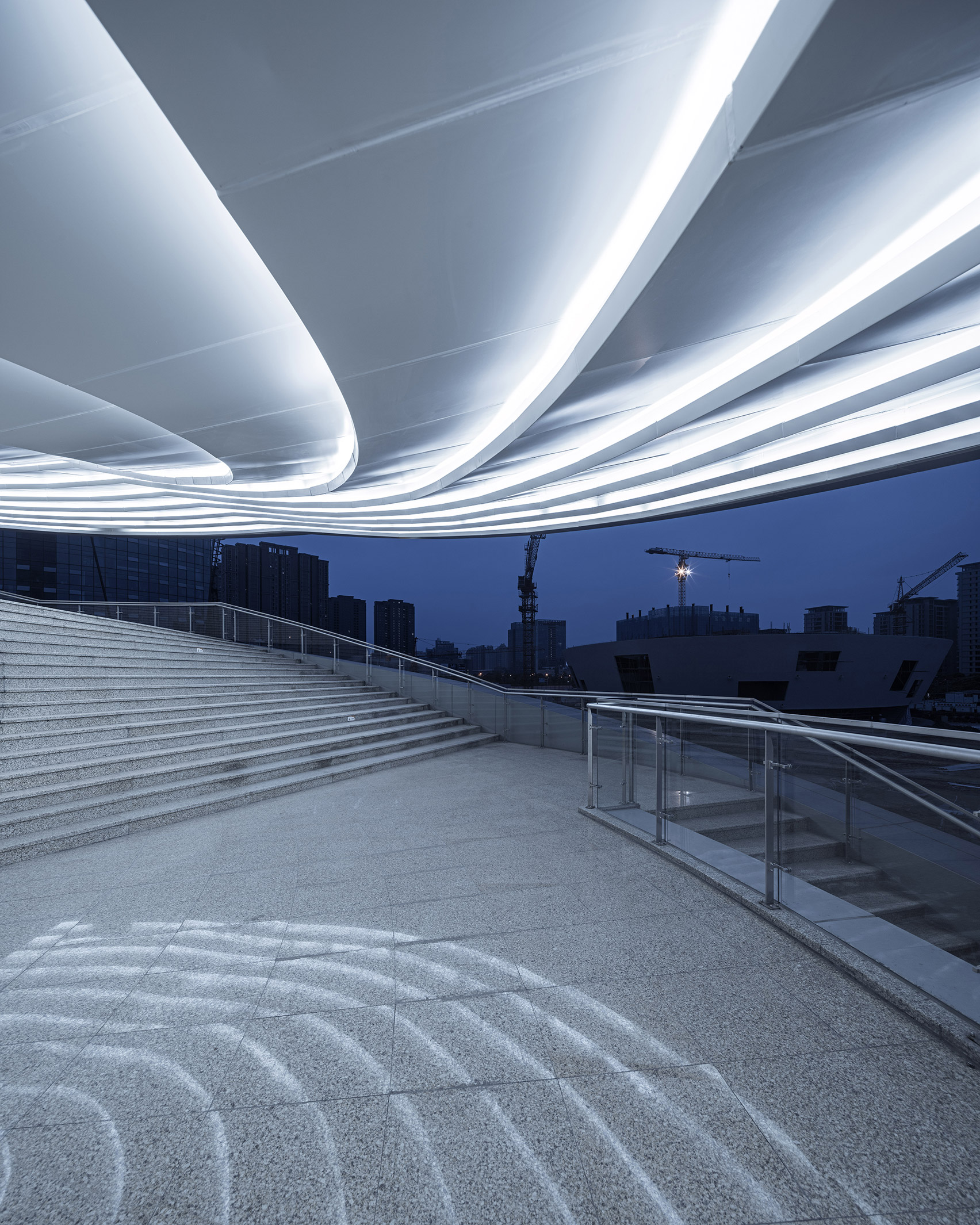 The building’s main structure is provided by a steel core than contains a central air well and an elevator. A space frame connected to a suspension cable ensures the horizontal floors remain column free.

“The changing geometry of the staircase from the first to the third floor is directly tangential to the structural steel core,” ATAH explained, “while horizontal steel members overhang to support the spandrel.” 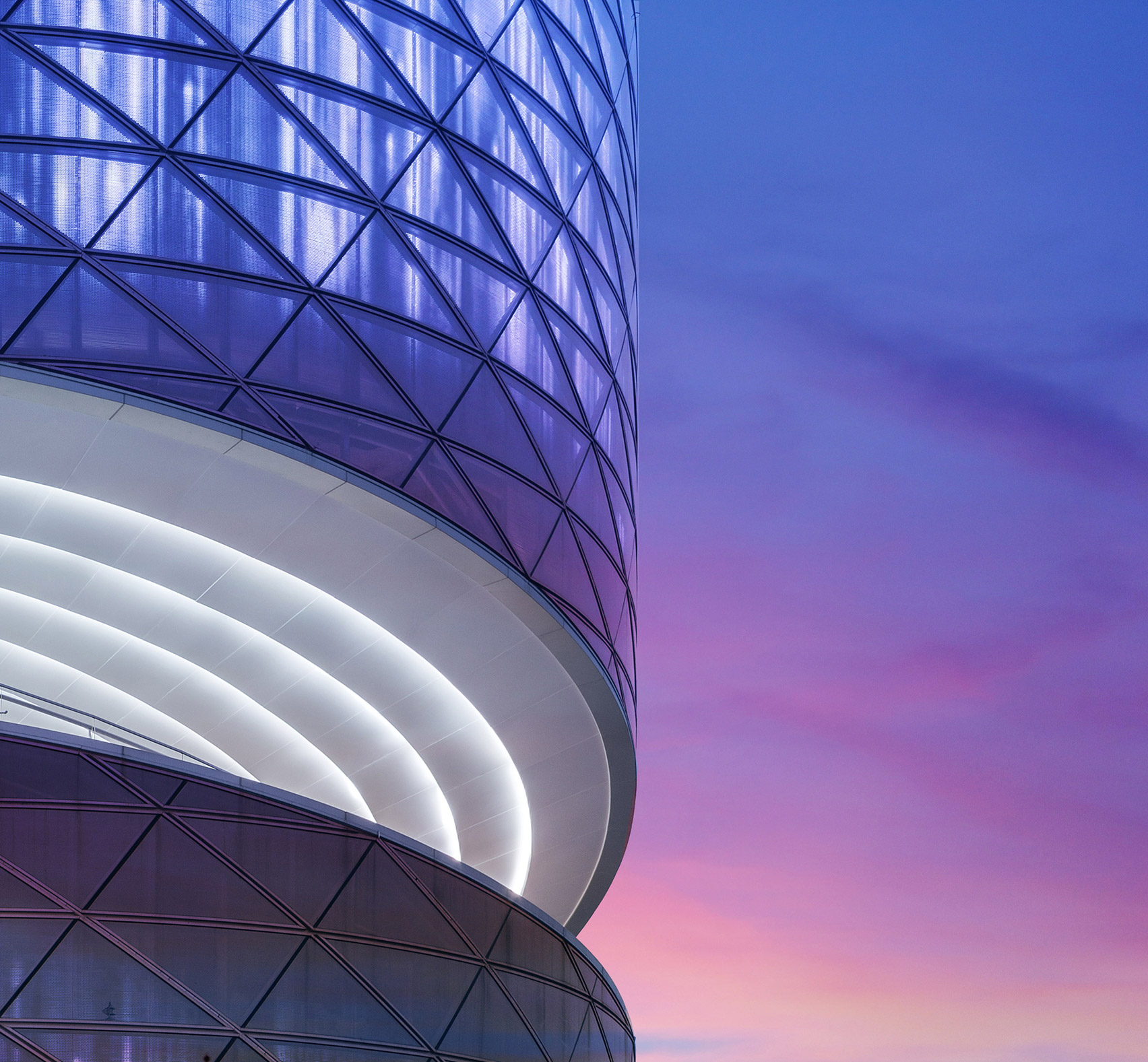 The Heli-stage’s external surface is wrapped in a seamless curtain wall of curved triangular double-glazed panels. This surface incorporates projection technology that can transform the building into an animated beacon displaying different patterns or graphics.

The building’s internal facade comprises a single modular unit that is applied across the walls and the underside of the sweeping ceilings, where concealed lighting illuminates the banded surface. 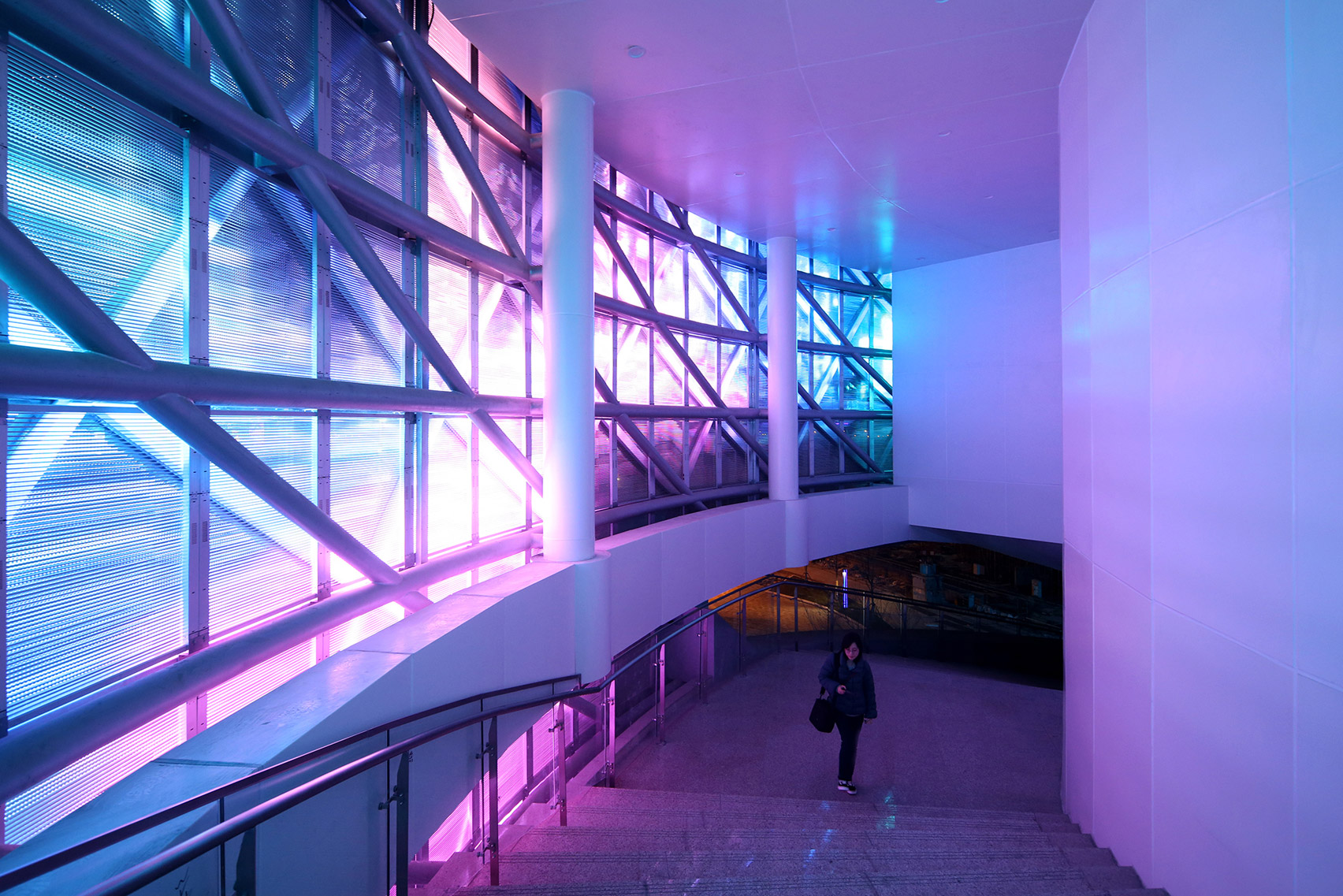 “The interior design adopts the concept of weaving, using abstract design elements such as the spinning wheel,” the architects added.

“Upon entry, visitors are immersed in the architectural extravaganza of rotating, diffusing, and interweaving movement, which celebrates the space.” 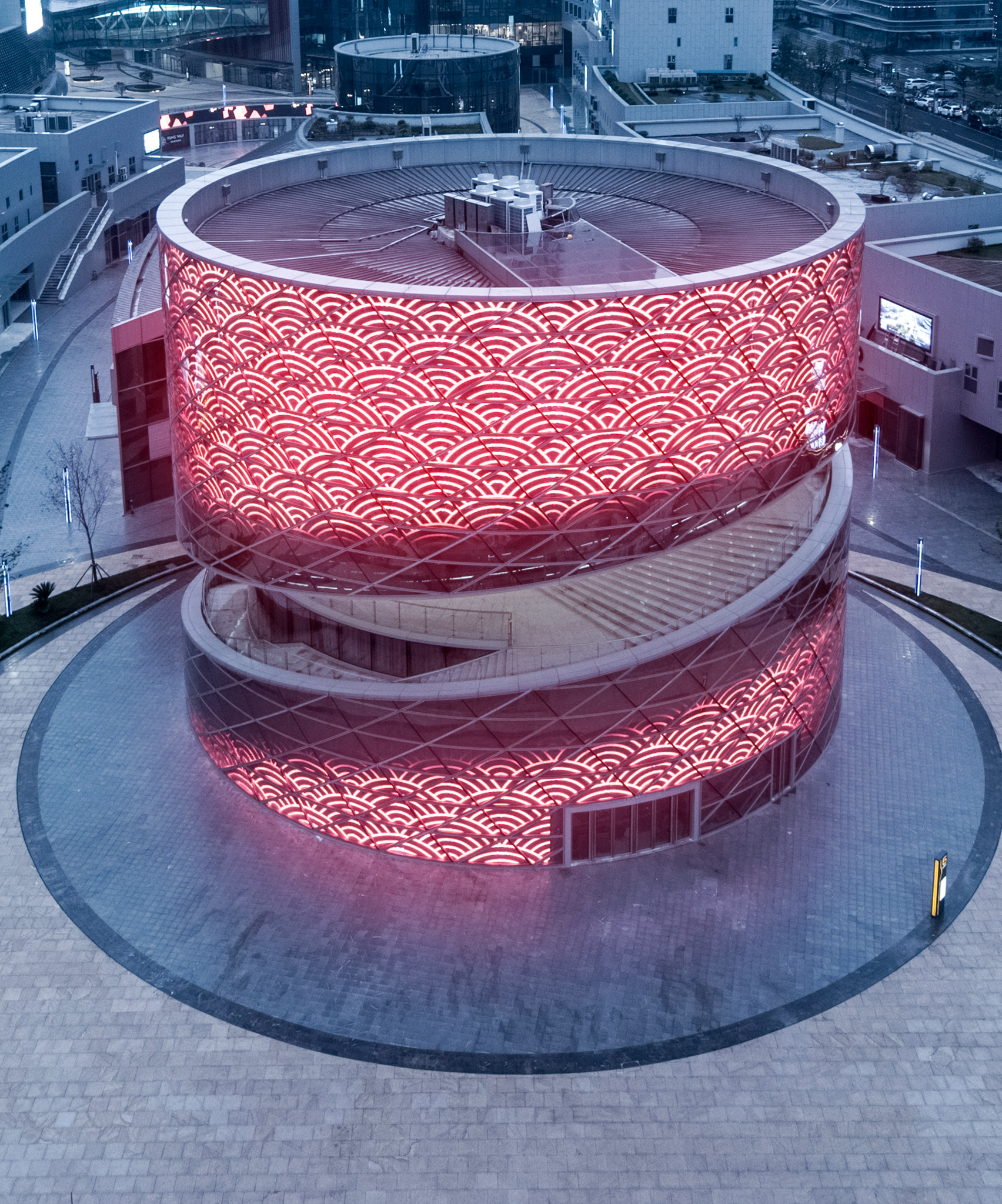 The building features three floors of exhibition spaces that surround the central lift core and are also accessible from the spiralling staircase.

In Beijing, Penda created an auditorium for an arts centre with arches and mirrors that form a surreal landscape of curving cutaways. Steven Chiltern Architects is currently building a round theatre in Wuxi surrounded by a forest of thin white columns.