MVRDV’s plant-covered walkway in Seoul may look like a low-budget version of the High Line, but it’s much more than that – it’s the sign of a new frontier in city-making, says new Dezeen columnist Gerard Reinmuth.

It seems every city has a disused conduit that is set to be transformed into “the new High Line”. Upon completion, comparisons to the so-called “original” version  – conveniently forgetting the Coulée verte René-Dumont in Paris – are then made.

The recently opened Seoullo 7017 in Seoul, Korea, is no exception to this pattern. Completed in time for the inaugural Seoul Biennale of Architecture and Urbanism, Seoullo was traversed by many of the architects and journalists moving from one biennale site to another. Before the dust settles and everyone moves on, some reflection of the project outside the inevitable comparisons is warranted.

Yes, Seoullo is a pedestrian-only path through the city, and yes, it is raised above ground level. But simultaneously, the project can also be understood as a specifically Seoul moment of urban regeneration, which has occurred as part of a progressive series of public space transformations in the city over the past 15 years. This specificity poses significant questions, not because of a formal or typological resemblance of the walkway to something else, but around how architects might engage with city-making, as the focus of cities continues to move from expansion to consolidation and renewal. This shift brings significant implications for city governance, procurement processes and, with this, how the discipline of architecture might exist beyond the forming of novel objects.

Seoul is undergoing an extended phase of urban regeneration that did not commence in earnest until the new millennium. We now forget that, after the Korean War, South Korea was the poor neighbour to a triumphant North. This balance did not change until the so-called Miracle on the Han River – a period of economic transformation that began in roughly 1961 and continued until the crisis of the late 1990s. By the new millennium, and after IMF interventions and economic restructuring, modern Korea stabilised and the world became home to a proliferation of gadgets from companies run by the elite “chaebol” families: Samsung, Kia, Hyundai, among others.

This new era appears to have prompted the local government in Seoul to reconsider the city beyond its instrumental role in economic development, as a place for an increasingly affluent middle class to partake in a 21st-century exchange of goods and services. This transformation – in the context of a worldwide focus on competition between cities – led to a questioning of how Seoul works as a city of consumption, not just production. 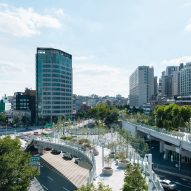 The transference from a “developmental state” stimulating economic growth to a 21st-century consumption economy starts to explain the context for Seoullo, the latest in a series of unprogrammed urban spaces that have been reimagined over the last decade.

Two of these predecessors are gathering spaces: Seoul City Plaza at the city hall, and Gwanghwamun Plaza on the axis of the historic Gyeongbokgung Palace. Both were completed amid concerns about their potential for use as mass gatherings and dissent – concerns that were spectacularly realised in the protests against President Park, which led to her impeachment earlier this year.

These two gathering places have their counterpoint in the two circulation-focused projects that connect them: Cheonggyecheon and Seoullo.

Cheonggyecheon and Seoullo deserve comparison, given their sibling status. Both occupy prior freeway routes: Cheonggyecheon is a stream that travels east-west across the city, one level below grade; while Seoullo is an elevated former highway located over the fan of rail tracks that exit Seoul Station to the north. Both projects are conceived as green infrastructure and both are intended as more than just connective tissue through the city, as places to partake in a range of informal activities.

However, Seoullo has three distinguishing variants from Cheonngye that deserve comment.

Firstly, the project was conceived not just as a piece of internal rewiring in the city but on the basis of an “imminent” collapse of North Korea – a geopolitical shift that would in practical terms reposition Seoul Station as a hub on the Korean peninsula as the “starting and terminal point of the Eurasian Railway”.

This international context operates in parallel to questions regarding the regeneration of the market and production areas. These “dongs” were previously separated by 30 lanes of traffic, but were connected by Seoullo. The decision to implement the project wasn’t a case of bottom-up campaigning for new recreation space, as with the High Line, but top-down decision making about the future viability of the city.

One starts to wonder what MVRDV bought to the project

Finally, a signature architect was selected to author the project. The significance of this last matter cannot be underestimated. Whereas other public spaces in Seoul have been designed by the in-house architects of local government agencies – and who still remain anonymous to those outside the Seoul architecture community – a major international practice was selected to design Seoullo as the result of an international competition. Appointing MVRDV has had a significant impact on how the project is understood and how widely it is known. Yet it is also this fact that obfuscates proper consideration of the project and what it suggests about the future of the profession.

Much focus has been given the MVRDV’s series of round planter boxes, the ecosystem of plants arranged according to the Korean alphabet and the little retail kiosks dot the promenade. Yet conceptually, none of these elements is particularly powerful. And when combined with the workman-like detailing and construction of the planters and other elements, such as the glass balustrades, access stairs and handrails, one starts to wonder what MVRDV bought to the project.

In parallel, the decision to instigate the connection at all, to ensure multiple connections to the streets on the eastern end while, on the west, the bridge is taken directly into high-rise buildings, are where the conceptual and organisational power of the project reside. Yet these matters were determined before the competition.

The focus here is not a critique of MVRDV’s solution, but a more fundamental questioning of the future role of the architect as exemplified by this project. The architectural team working for the state made the key conceptual moves, while the international starchitect shuffled the deck chairs. The local government architects advocated internally for the project to occur, while the international team possibly assisted in that by providing marketing “cover”. The local architectural team devised the project with an awareness of the implications of stimulated movement through the “dongs” either side of the tracks, the international architect gave form to this in their competition scheme.

Seoullo questions our obsession with the starchitect

Seoullo could be an indicator of a new frontier for the role of architects in city-making. If we move from a world dominated by private capital to one where access to “imminent commons” drives city development, we see greater involvement in and advocacy by the city architects with city politicians to trigger key projects. If we allow the city architect team able to work through the implications of their decisions prior to running a competition, then we start to relocate the value of the discipline. Major pieces of urban regeneration and their impact, organisationally, on how the city works become the sites of maximum impact, while a focus on novelty and formal virtuosity might recede in importance.

This is why Seoullo is in, one sense, no High Line, but it is of equal importance. By demonstrating the effectiveness of a local government that can make significant strategic moves about the way in which the city evolves, Seoullo questions our obsession with the starchitect and highlights our blindness as to where content is often created.

Gerard Reinmuth is a director of Terroir, an architectural practice that emerged from conversations around the potential for architecture to open up questions of cultural consequence. Terroir’s work encompasses projects, research and regular contributions to the profession through exhibitions, teaching and writing. Reinmuth is also professor in practice at the University of Technology (UTS) Sydney, where he teaches masters courses in design and professional practice.

Photography is by Jim Stephenson.

The post “Seoullo is no High Line, but it is of equal importance” appeared first on Dezeen.