These foggy renderings by The Boundary forego the stereotypical blue-sky backdrop to depict a wedge-shaped tower by Richard Keep Architects and Henry Goss Architects, which has just been granted planning permission in Nairobi, Kenya. 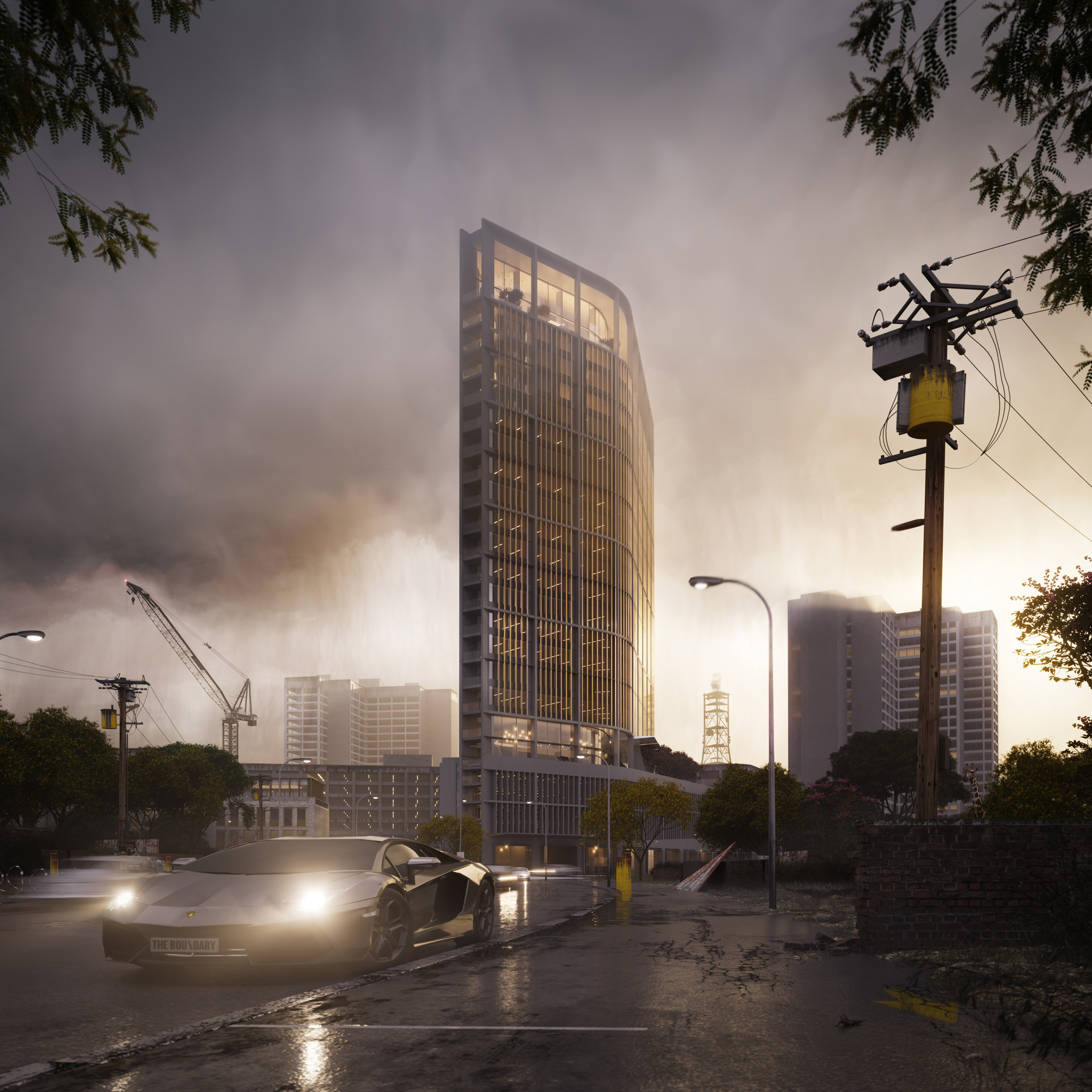 London-based Keep and Goss designed the 30-storey mixed-use Akili Tower for a spot on Upper Hill, where it will join a growing number of high-rises overlooking Uhuru Park and the central business district of the Kenyan city.

Offices and apartments will fill the main body of the tower, with penthouse suites occupying the uppermost floors, while a restaurant, bar and terrace will be set at podium level. The ground and basement levels are to host shops and parking.

Images of the project were created by The Boundary, the visualisation studio Goss runs with Peter Guthrie. The pair wanted to avoid the “utopian” vision that architectural visualisation artists often strive for.

They instead took the opportunity to produce a set of less stereotypically presented renderings that capture the tower from unusual angles – similar to those a photographer might achieve with a camera – and in inclement weather. 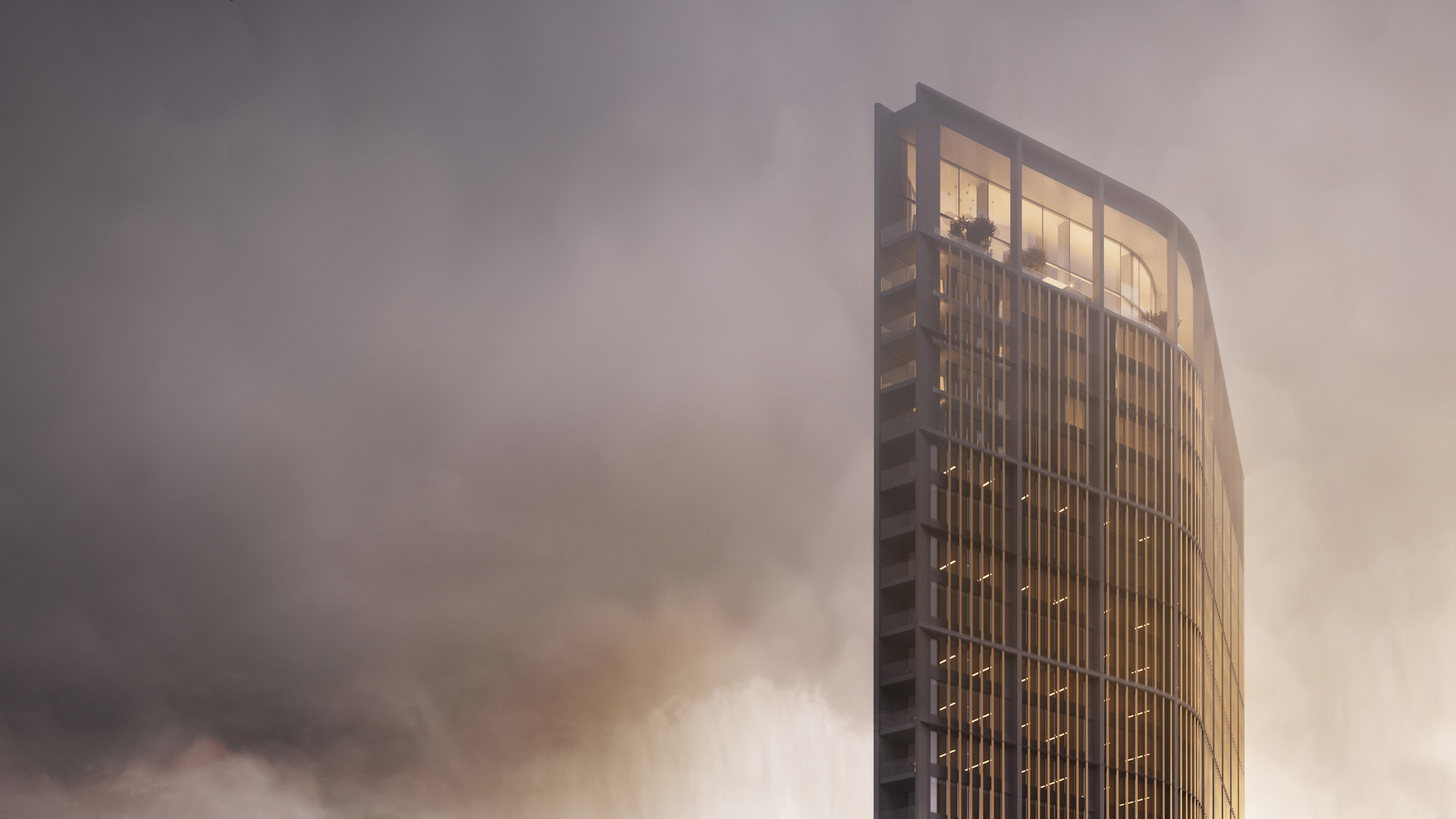 “We always think of ourselves as architectural photographers inhabiting a virtual 3D world rather than computer illustrators or painters in a more traditional sense,” Goss told Dezeen.

“We have worked in this way for years and it is certainly the way that the industry is going particularly with the rapid growth of virtual reality, which demands the use of full 3D environments and prohibits the use of more old-school painterly 2D techniques.” 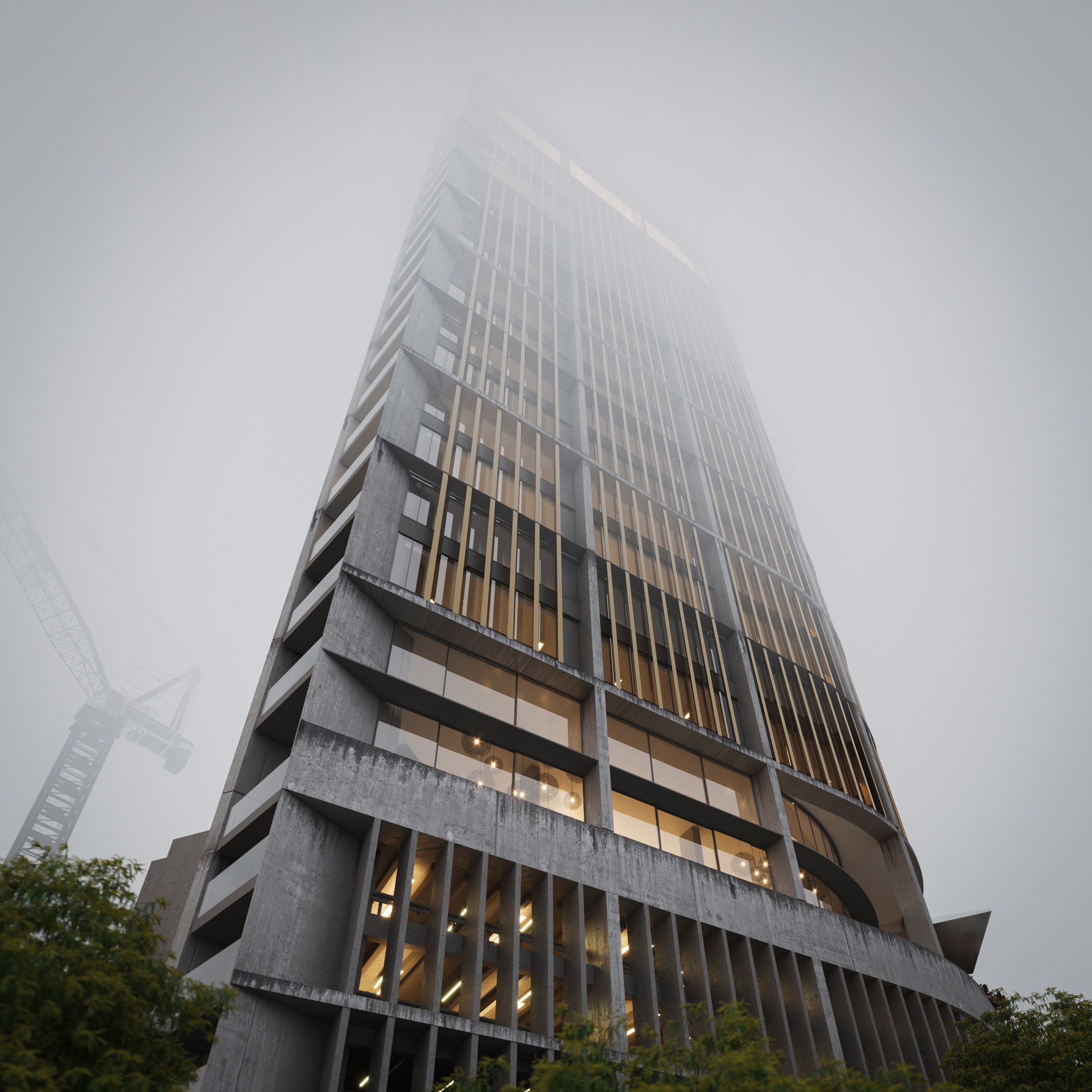 Rather than the clear blue skies and beating sun often depicted in architectural visualisations, The Boundary opted for a foggy and rainy backdrop, a choice that came from the city’s natural climate. Goss said the project provided the “perfect opportunity to do something a little different”.

“Contrary to my original preconceptions of an equatorial city in Africa, Nairobi is in fact not searingly hot with blazing sun and clear skies the year round but rather has 926 millimetres of rain per year compared with London’s 621 millimetres,” he added.

“They were also not developer-driven thus allowing greater aesthetic freedom without the usual marketing requirement for perpetual blue skies.” 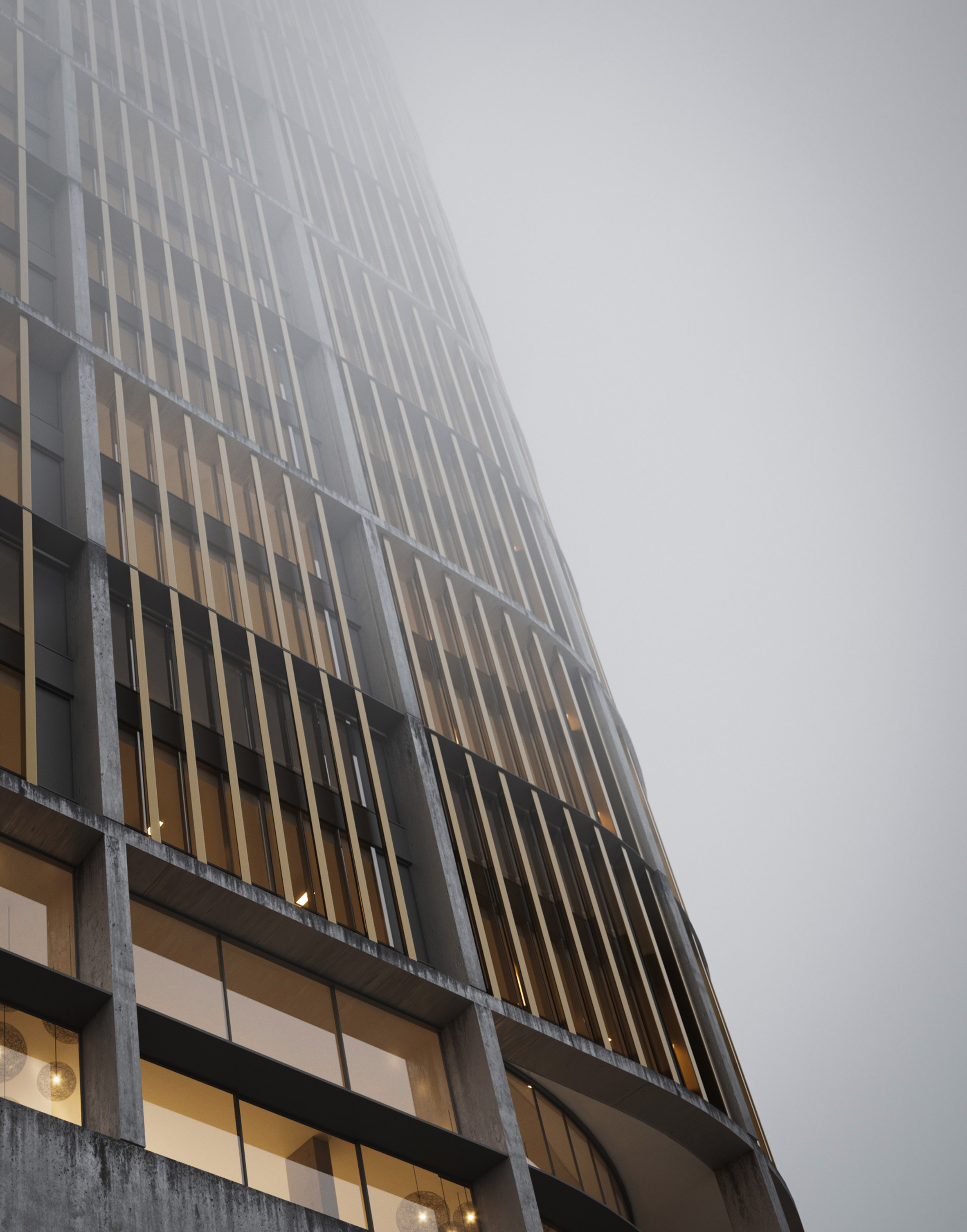 For one shot, Goss and Guthrie have taken the liberty of imagining a public sculpture in the forecourt of the building, spelling out The Boundary in large three-dimensional lettering.

The visualisers used SketchUp and 3ds Max for the modelling stage of the process, and 3ds Max and Corona Renderer for the rendering process. Photoshop was used to add some small post-production effects. 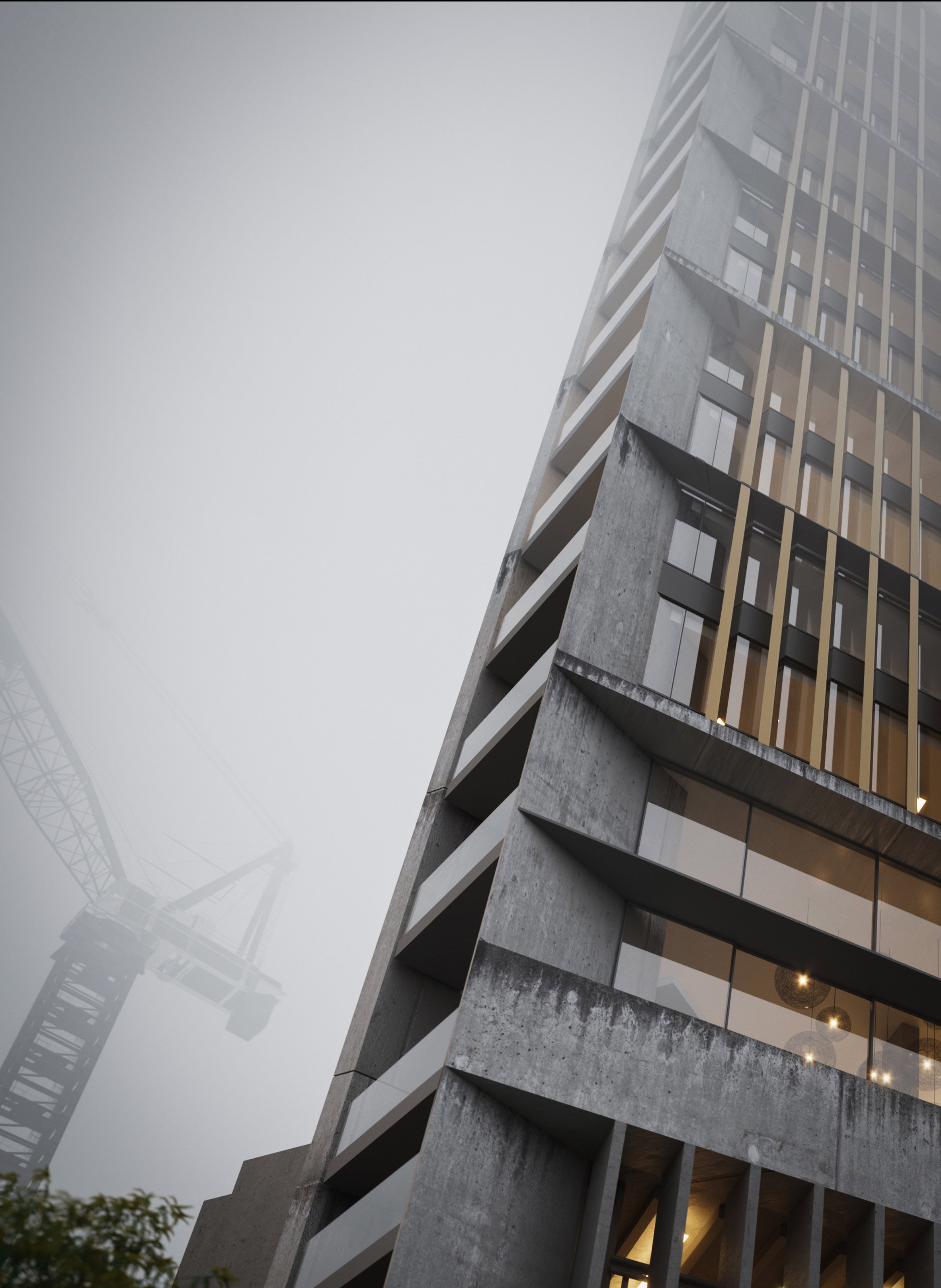 The images show the tower occupying a wedge-shaped site, with the form of the base following the geometry of the area and the block above tapering to a slender profile at one end.

“The form of the base is determined by the wedge-shaped site and the continuous parking ramp which spirals around the central core,” explained the architects. “Above the podium, the wedge is mirrored around the building’s core and curved to create a plan form akin to the Masai Shield of the Kenyan flag.”

“One of the striking things about Nairobi is the lack of requirement for private developers to make any meaningful contribution to the surrounding area by way of infrastructure improvements or local amenities as is often mandated by policies such as the Section 106 agreement in Britain,” they added.

“This can result in some bizarre juxtapositions of new developments adjacent to areas of near dereliction and decay.” 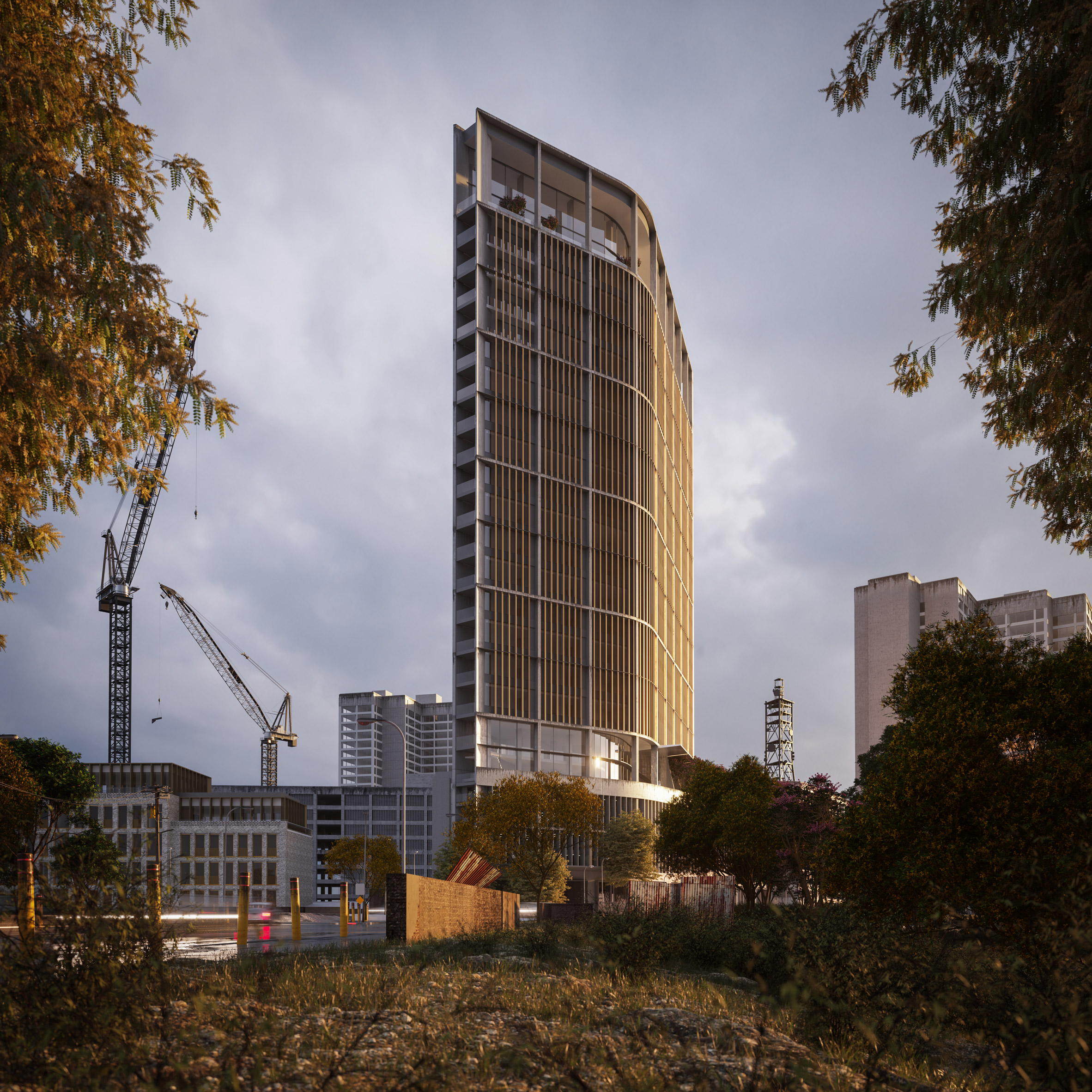 The concrete frame of the building is shown largely covered in terracotta louvres, with a glass curtain wall set behind. Exposed areas of the facade will be fitted with solar panels.

While the office levels will occupy the full floor area behind the layered facades, setbacks will provide apartments with terraces.

The balconies and staircases are set at either side of the tower, where the floor plan narrows.

“The stair cores and balconies are located at either end of the building and become the continuous features which pin the tower back to the ground level,” said the architects. “The solidity is further broken down as the plan form gets narrower at the extremes, so the building becomes more transparent.”

Construction is expected to begin on Akili Tower later this year, with local firm JEDNA as executive architects. 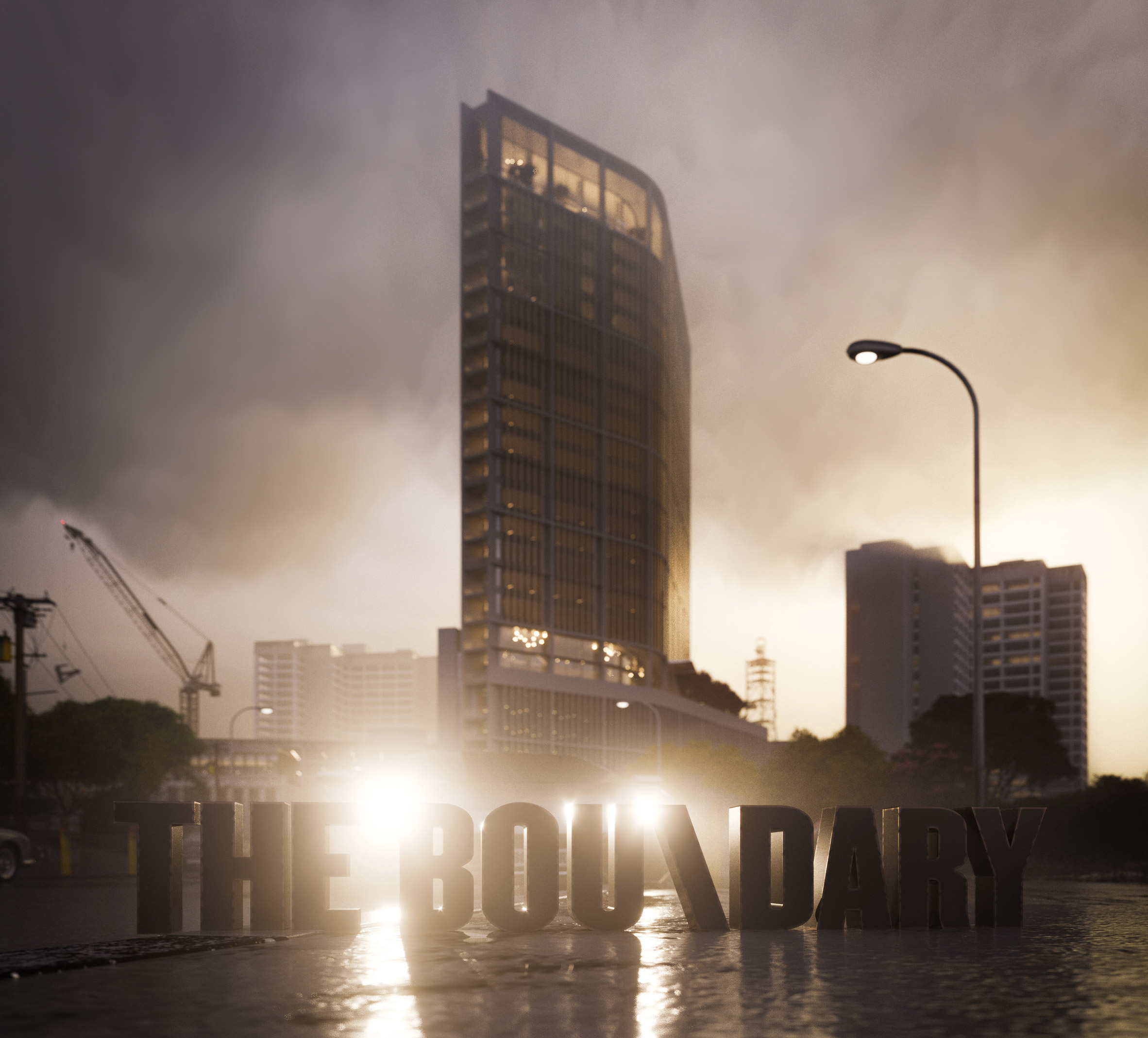 Goss, who has revealed several of his own architectural projects in atmospheric renderings, spoke to Dezeen about the visual style he developed through working with Guthrie. He said its the inclusion of “real world imperfections” that give their visuals an edge.

Images by The Boundary.