Pichler’s Milan-based studio carried out a full refurbishment of the Hotel Schgaguler, which is located in the UNESCO heritage-protected village of Castelrotto. 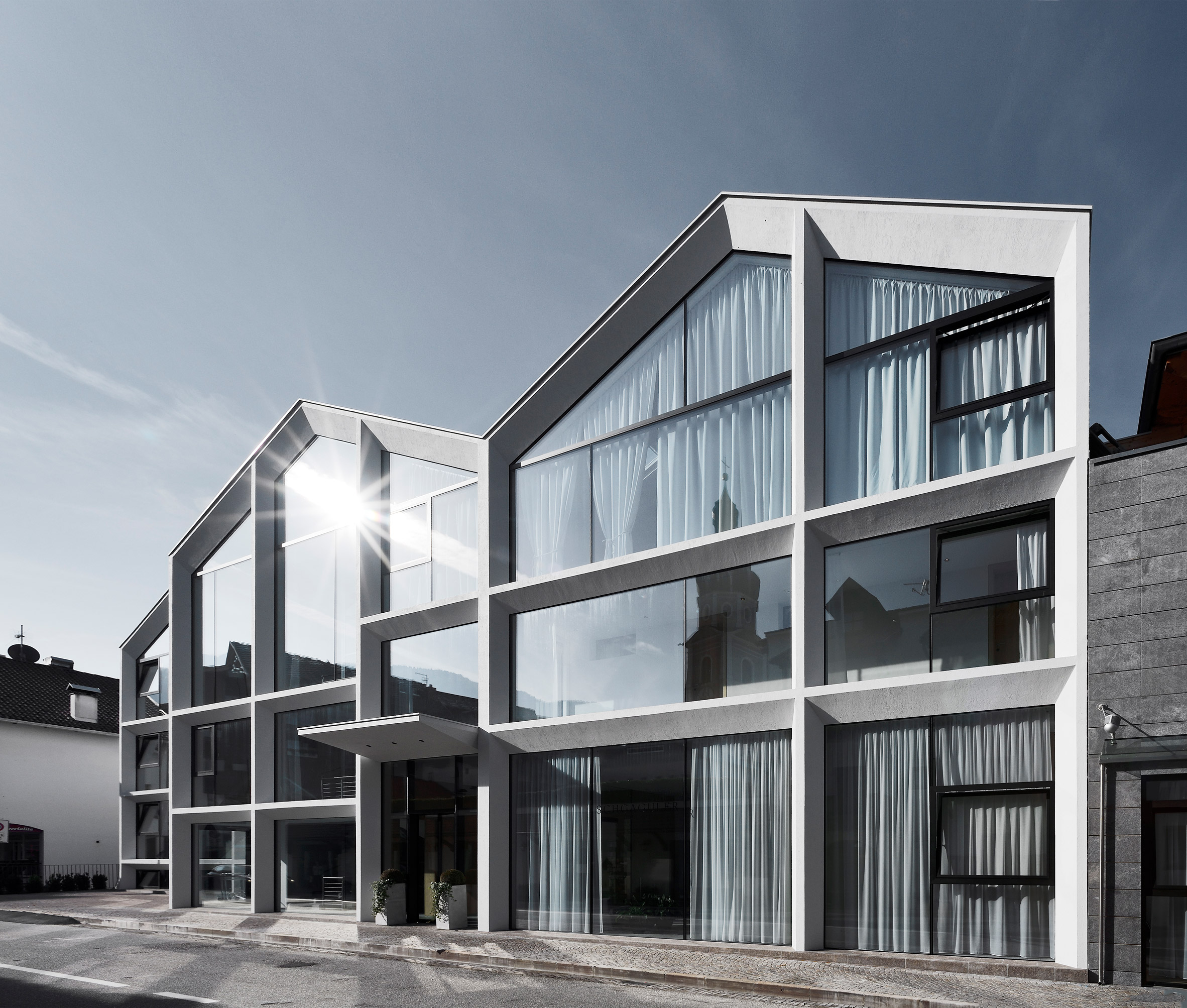 The hotel was originally constructed in 1986 and displayed features influenced by traditional Alpine architecture, including steeply pitched roofs and balconies lined with wooden balustrades.

As it had begun to feel faded and outdated, a renovation project was undertaken that retains the existing structure as the basis for a more modern design with a minimal aesthetic. 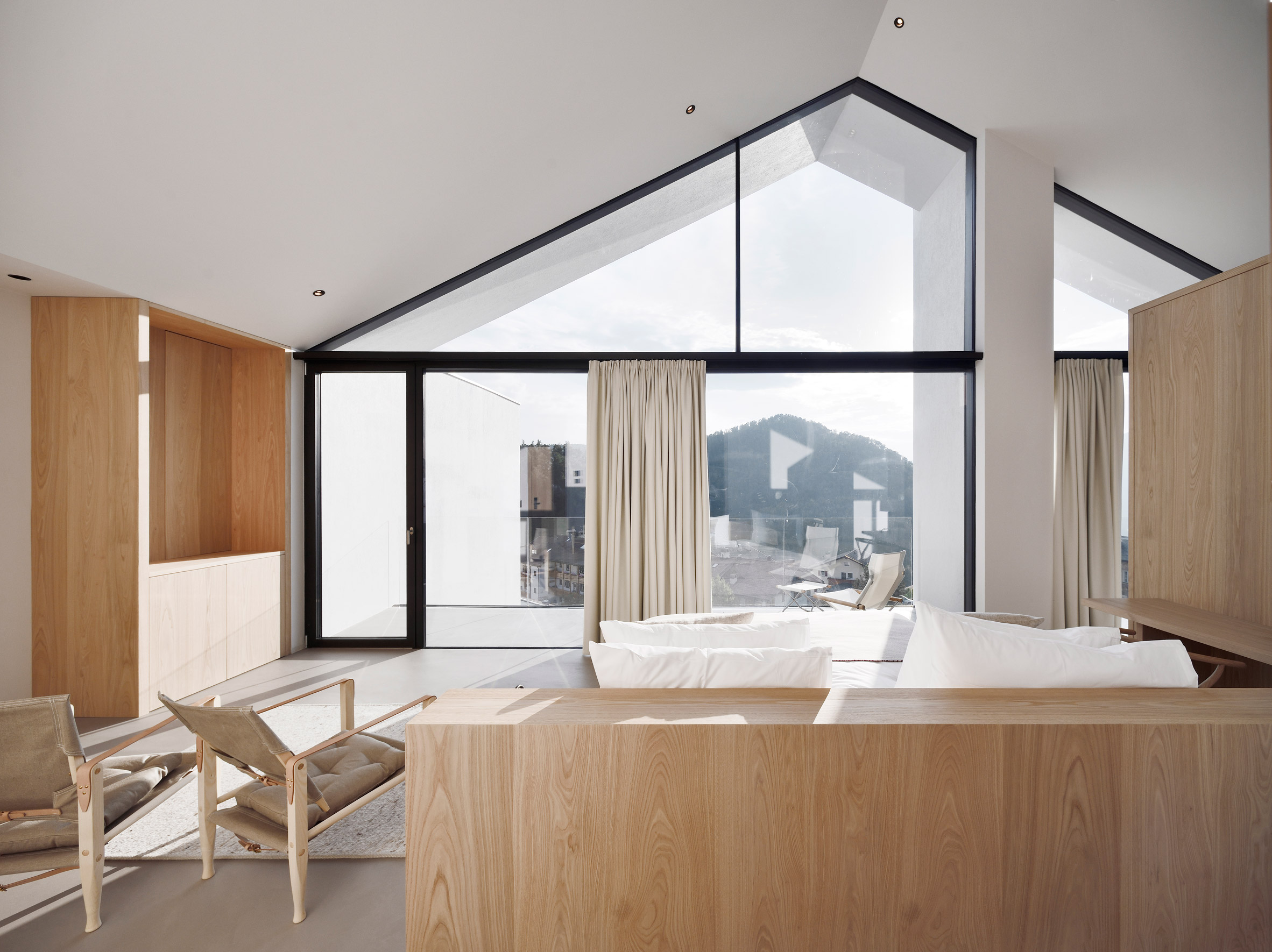 “While respecting local context and its surroundings, the strong architectural identity of the hotel follows a contemporary reinterpretation of the alpine style and plays with vernacular elements such as the typical sloped roof,” explained the architect.

The original composition of three connected gabled forms is still evident, but the facade treatment is altered through the addition of a simplified external concrete exoskeleton. 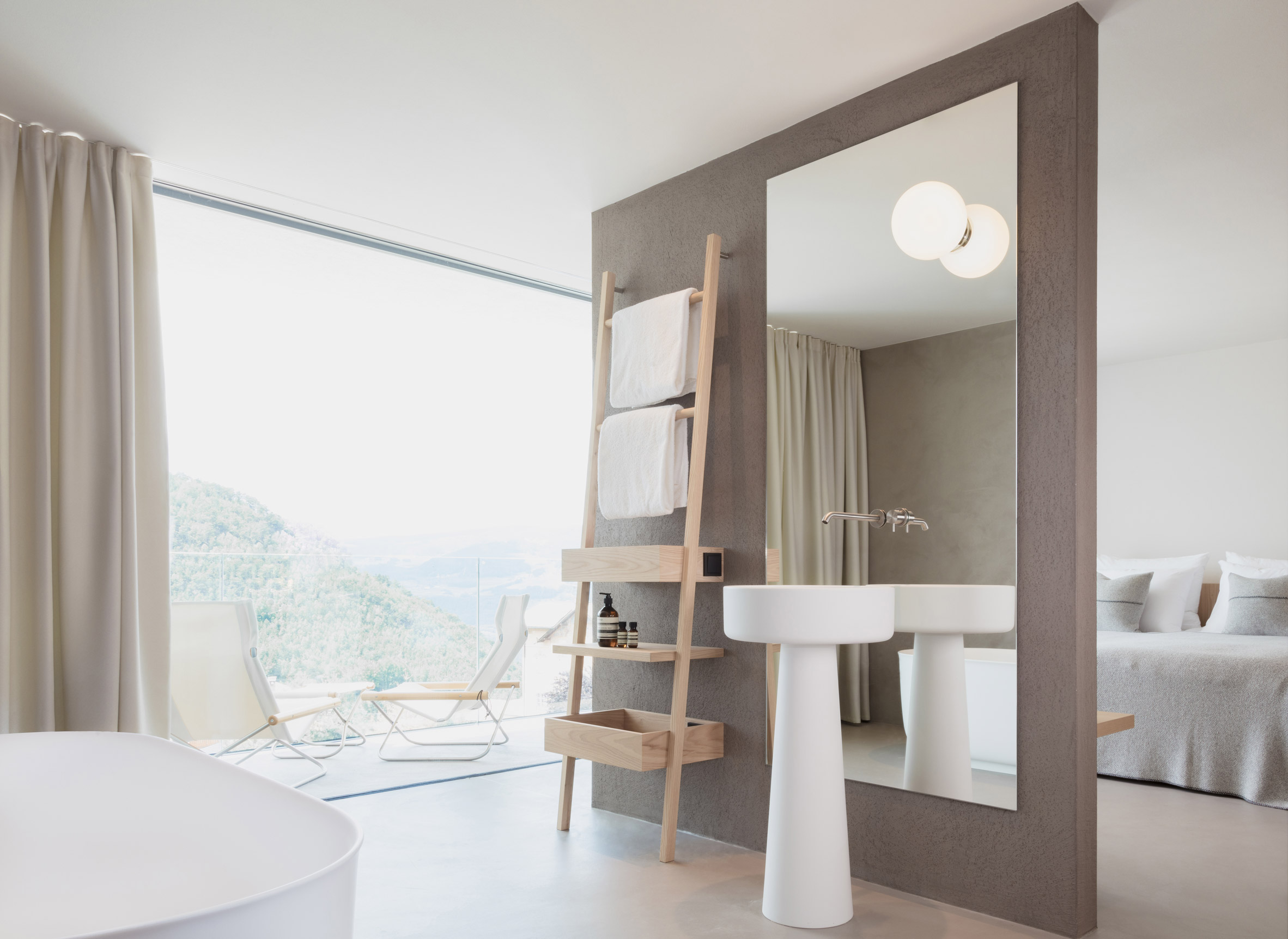 The new concrete facades are treated with a white render mixed with chalk to evoke the geology of the surrounding mountains.

The facades’ tapered surfaces vary in depth depending on their orientation and programme. The north-facing elevation where circulation and public areas are positioned has a narrower depth, while the southern facade extends out to form shaded loggias.

Internally, the refurbished spaces seek to combine elements of tradition and contemporary culture to create a sense of homeliness and wellness appropriate for a modern boutique hotel and spa. 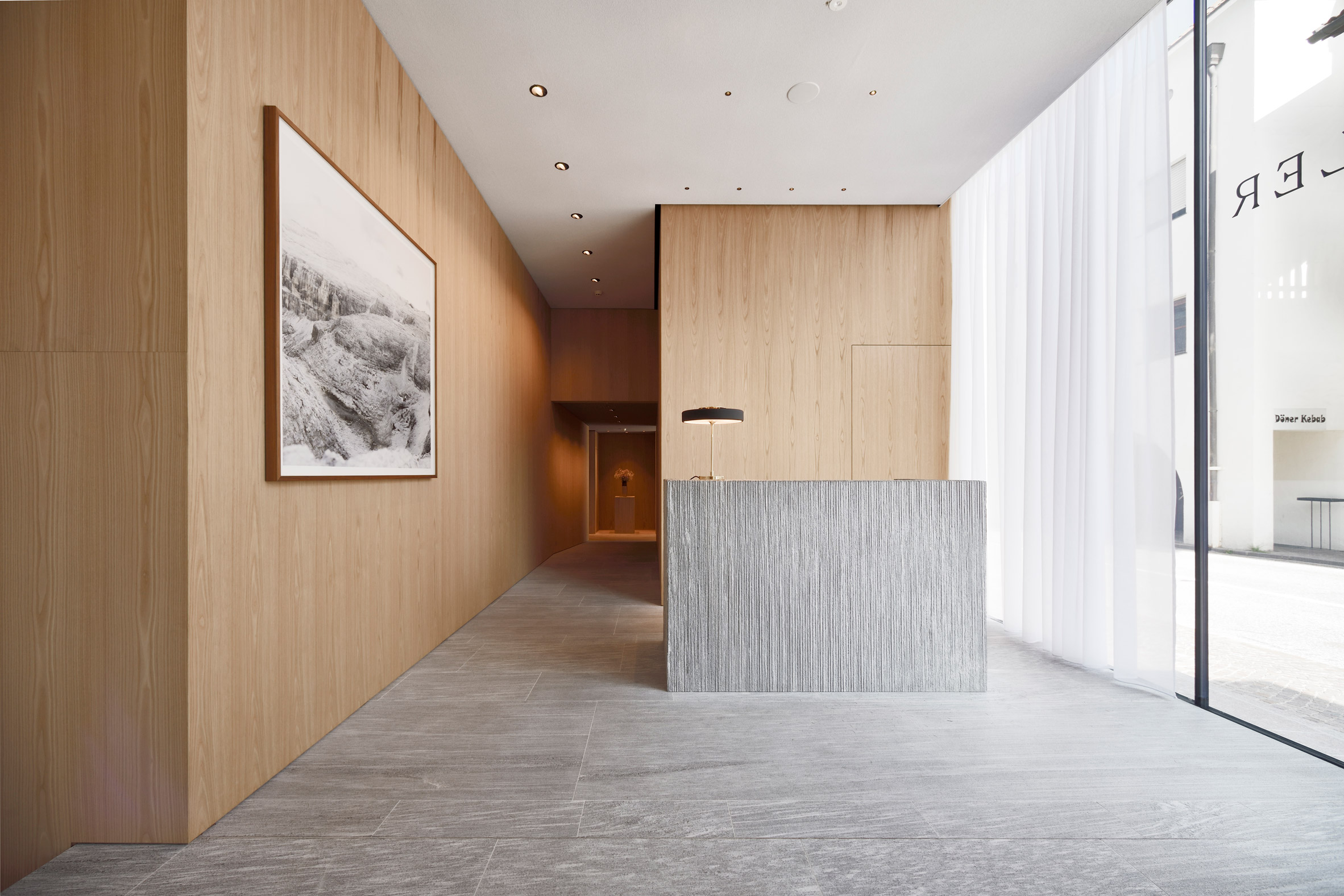 “Simple and functional interiors with open layouts are combined with local materials such as chestnut wood or local stones and textiles,” said the studio, which designed all eight rooms as well as the bar, restaurant, lobby and spa area.

The main public spaces are located on the ground floor, and include a bar that opens onto a large terrace offering views towards the nearby Sciliar mountain. 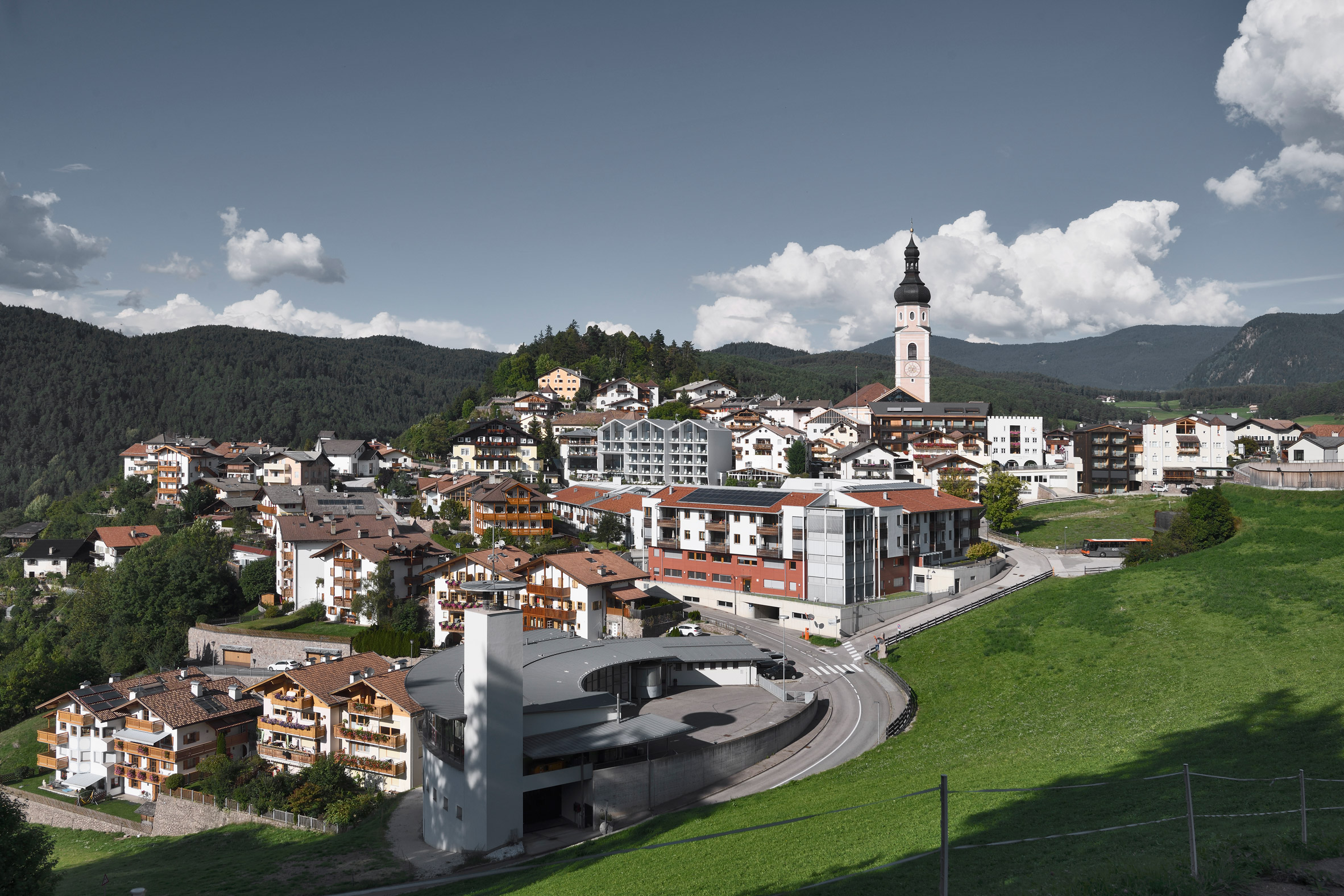 The spa is situated in the subterranean level, with the guest rooms and suites on the upper floors. The rooms all feature open bathrooms with free-standing bathtubs and full-height windows framing views across the valley.

Peter Pichler Architecture’s previous projects in South Tyrol include a restaurant featuring three gabled structures that projec out towards the landscape, and a pair of holiday homes wrapped in reflective glazing.