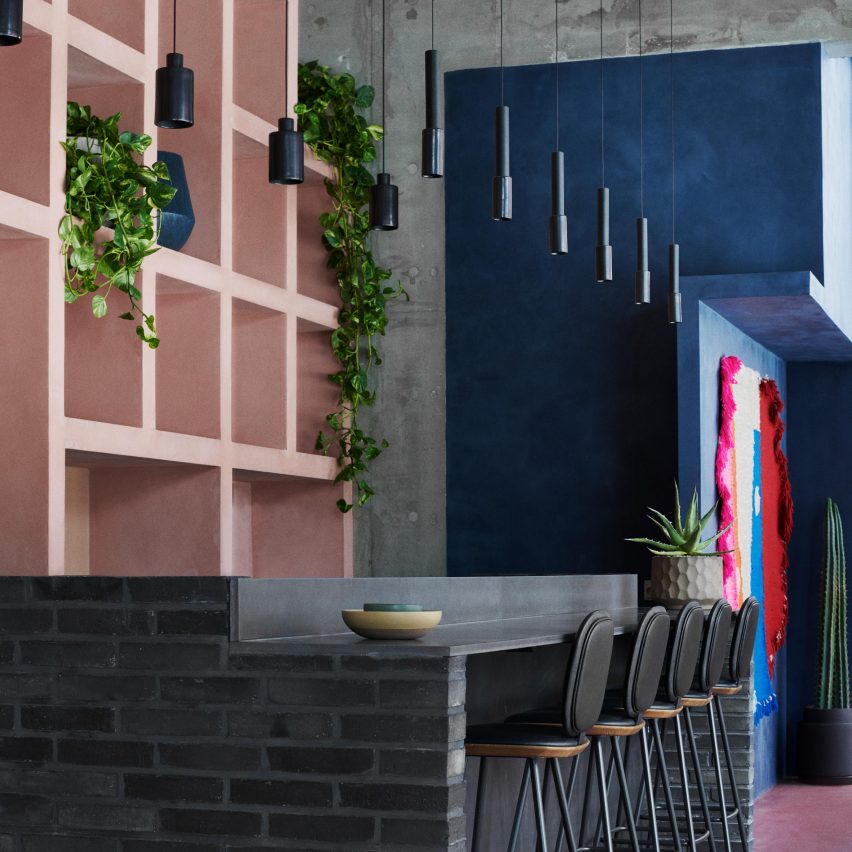 Located in the docklands district of Nordhavn, the restaurant captures the colours and forms of Mexico City and combines them with Scandinavian furniture and materials.

The project is the brainchild of former Noma chef Rosio Sanchez, who already has one restaurant in the city – the Hija de Sanchez Taqueria in Kødbyen.

The idea here was to expand the concept, moving up from tacos and cocktails to a full restaurant menu, but without losing the casual dining experience that made the taqueria so popular.

To achieve this, OEO Studio founders Thomas Lykke and Anne-Marie Buemann decided to divide the space up into a mix of zones.

There are a mix of high and low tables, with some spaces facing the bar, some clustered around an indoor tree, and others positioned alongside the windows. There’s also an area overlooking the open kitchen.

“It was very important to me that, no matter where you sat, there was a unique perspective and height,” said Sanchez.

“I also really wanted the space to have the illusion of a long bar and to give a casual cantina feel,” she continued. “The different seating heights makes it very unique experience for guests, so one can try a different area each time they return – anywhere from the bar, kitchen bar, to the dining room.”

Colours are used to pick out different elements throughout the space. In the lobby area, bright blue walls create a bold contrast with the vivid tones of hanging wall rug by Mexican brand Mestiz.

The main dining room features a zigzagging wall partition and a shelving area, both coloured in a pale shade of pink. Along with the dusky rose floor and the yellow-beige wall tiles, they give the restaurant a unique colour palette.

Shades of grey help to soften the impact of the colour. As well as the exposed concrete structure of the building, OEO Studio introduced charcoal-coloured bricks and grey countertops.

“Mexico is full of vibrant colours and Mexicans are not afraid of using them in exteriors and interiors – in sharp contrast to the Scandinavian architectural and design culture that is our background,” said OEO Studio co-founder Thomas Lykke.

“In the design process, we were very inspired by Mexican architects such as Luis Barragán and by Mexican art, craft and design. Our concept was to create a space that gives you the flavours of Mexico, in Copenhagen.”

Furniture and lighting were carefully selected, to reinforce the relaxed vibe.

There are products sourced from Mexico, like pendant lights from designer David Pompa and Silla chairs, as well as a few of OEO Studio’s own designs, including the Pauline bar stools for Brdr Krüger and tables made from Caribbean walnut.

Greenery plays an important role too. The indoor tree is the centrepiece of the space and is accompanied by desert succulents and trailing plants.

Hija de Sanchez is not the only restaurant OEO Studio has designed for a former Noma chef – the office also worked on Inua in Tokyo, which is headed up by chef Thomas Frebel.

More recently, the studio has also completed a revamp of Michelin-starred Kadeau.

Photography is by Michael Rygaard.