British studio OMMX has teamed up with house-builder Naked House to develop an affordable housing model for London, offering homes stripped back to just their bare necessities.

Designed to appeal to first-time buyers priced out of the capital’s traditional housing market, the properties will be sold for between £150,000 to £350,000 – a fraction of the £580,000 average house price in London.

Each of the homes will be presented as a bare shell, with no internal walls, floors or finishes, but will be future-proofed for adaptions that will allow owners to make their own stamp on the design.

The design “taps into the DIY spirit of Londoners”, according to Naked House, which believes the model could be replicated across the city to alleviate the ongoing housing crisis.

“This crisis in affordability is defining the lives of a generation. Crisis necessitates a creative response,” said the organisation.

“We reject the obscene accumulation of wealth in homes that is commonplace in London and want the homes to be affordable forever. Our model goes back to basics – saving build costs by creating neighbourhoods of genuinely affordable ‘naked’ homes,” it added.

“We have taken what a traditional house-builder does, taken it apart and turned it upside down.” 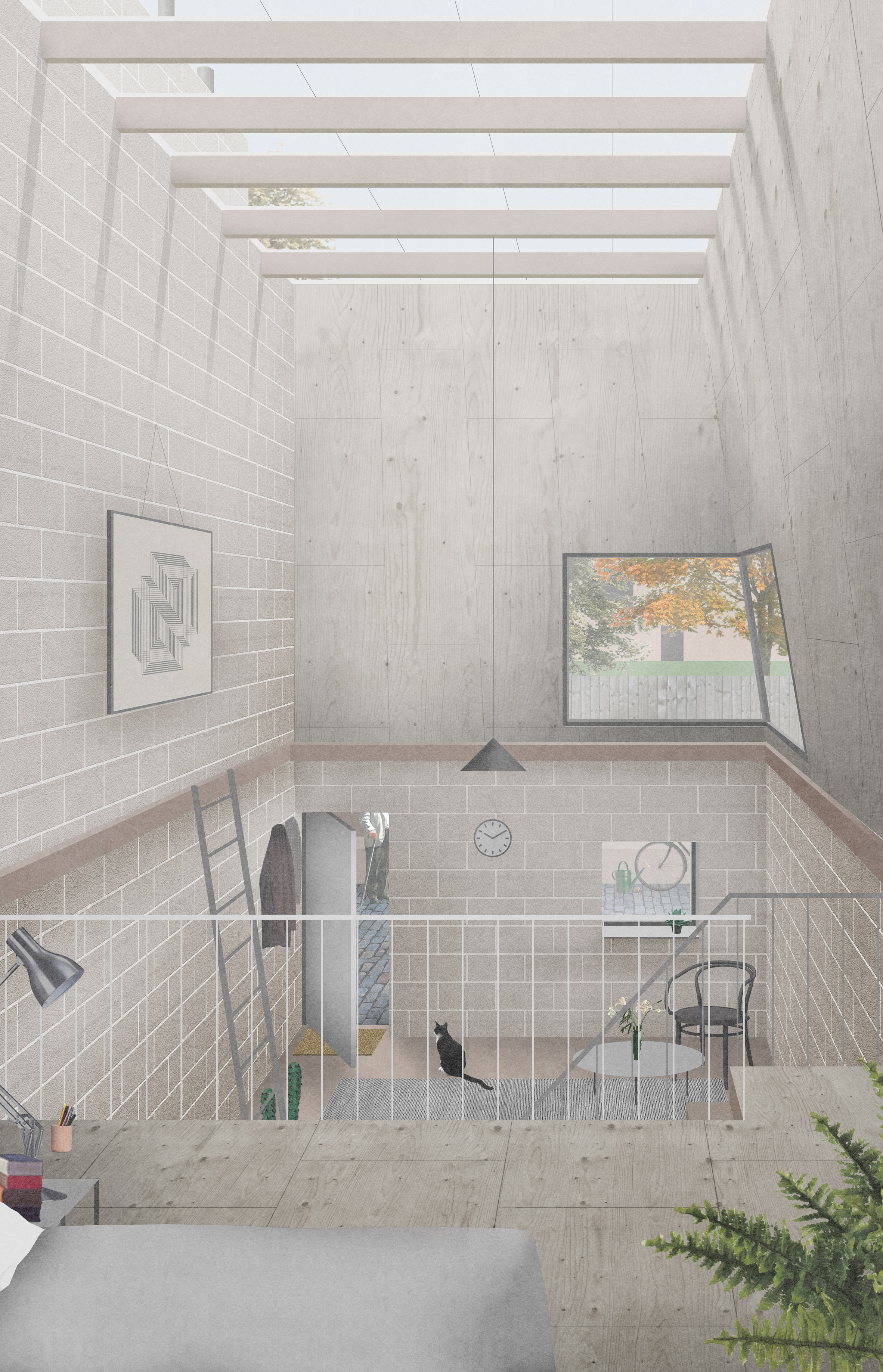 OMMX has developed designs for 22 affordable homes across three constrained sites in London.

The first development, which aims to provide a mix of homes for both single occupants and families, will be based in Enfield. The mews development will squeeze five terraced houses and two apartments onto an overlooked site.

“The development expresses itself as a hybrid between the detached farmer’s cottage and the Georgian terraced townhouse, with party walls rising to form chimneys and bathroom extracts,” said the architects.

“In so doing, it portrays the suburban condition, which historically was one of compromise between urban and country dwelling.”

Anyone with a salary under £90,000 can sign up to be considered for a home in the development, but Naked House plans to give priority to low-income and first-time buyers living or working in the area.

A leasehold arrangement with the council means the initial outlay to buy land will be offset, with tenants instead paying a monthly ground rent charge with the local authority.

A resale covenant on these properties aims to lock in the original discount for subsequent purchasers to help the scheme remain affordable in the long term. 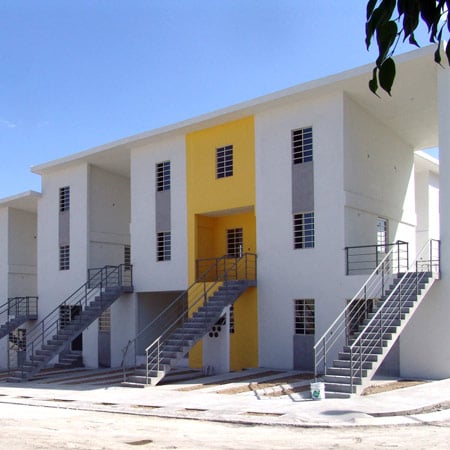 The Enfield site will be excavated by half a storey to sink the level of the mews homes, taking them largely out of view of neighbouring properties and creating a degree of privacy on the overlooked site.

In its “naked state”, each of the homes will consist of a single double-height and open-planned space measuring 50 square metres.

But by laying concrete foundations below the gardens and integrating footings for a second floor level, the architects have put the infrastructure in place for future expansion – similar to Alejandro Aravena’s pioneering “half a good house” schemes.

“The Naked House expands upon the common rear extension and loft conversion as an existing framework that people understand and feel comfortable with,” explained the architects.

“It provides a very affordable entry level shell, which is generously proportioned and loaded with potential,” they added. “The hard work is done by the contractor, and provides the resident with a blank canvas to tailor into their ideal home.” 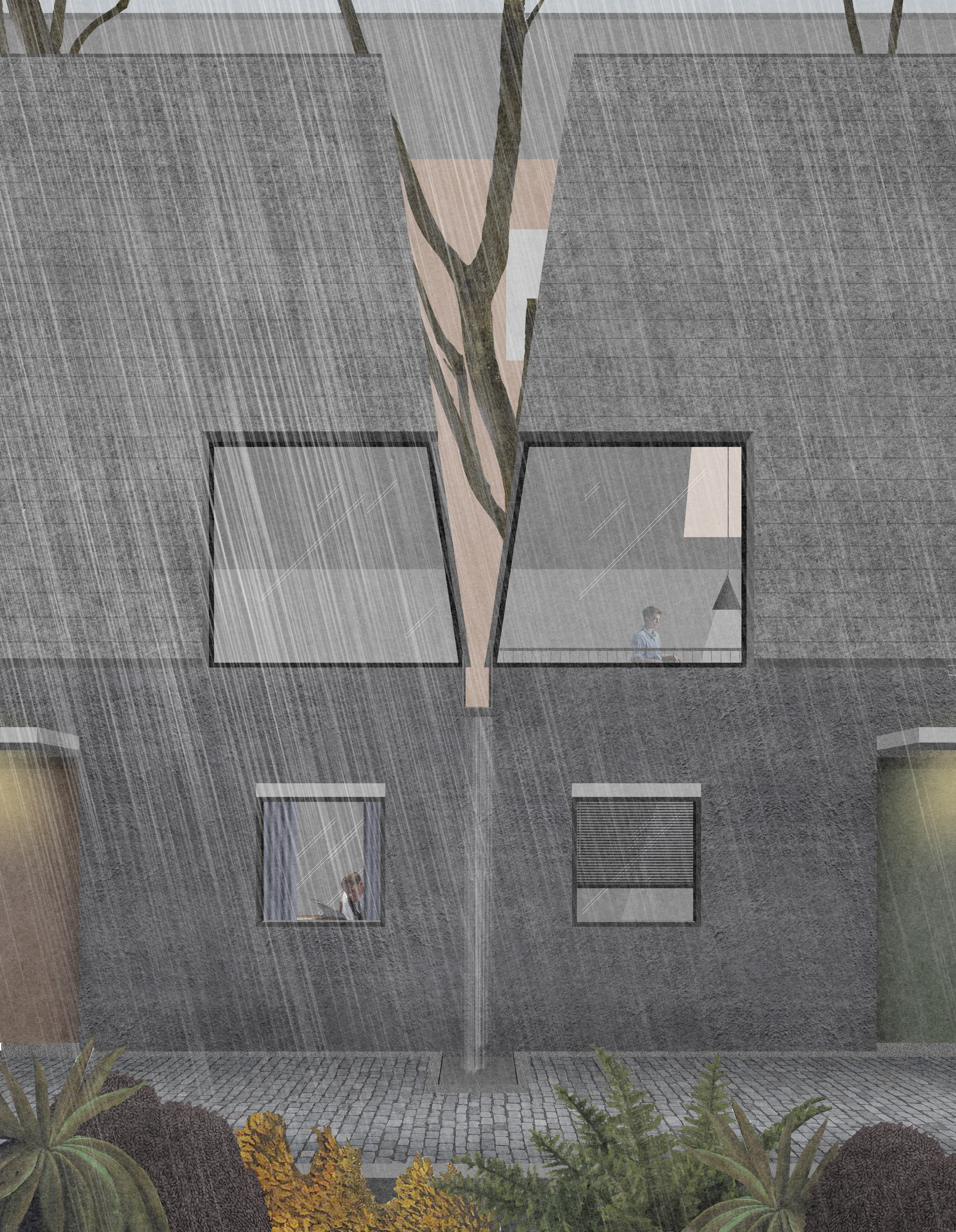 The loft and rear extensions would give the houses a 87-square-metre floor plan, allowing residents to create three bedrooms over two storeys.

The two single-storey flats at the end of the mews also have the option to extend – either into the rear garden for the ground-floor residence or onto the roof terrace at first-floor level.

“Each dwelling is loaded with potential and constructed from robust, cheap, DIY and design-and-build friendly materials,” said the architects, who plan to use leave blockwork walls and ply surfaces exposed within the houses.

Potential buyers already signed up to the queue for the scheme see Naked House as an escape from their existing living conditions – on house boats, with their parents or in cramped house shares at the whim of private landlords.

“It would be an adventure to come together with other people to create somewhere we can feel excited about living,” said one applicant. “Instead of a bit sad and depressed like whenever we check out our options on Rightmove.”

“I think the way we do property development in this country is all wrong, and would love to be part of something that shows a different and viable way of providing really good homes,” said another.

Another lure for potential buyers is the waste often associated with stripping out a house newly refurbished in a style not to their taste.

“I love the idea of a styleless house. I think it’s ridiculous that money is wasted on putting in stuff that is pulled out straight away,” said one applicant.

The organisation has now received mayoral backing and funding from the Greater London Authority for the scheme. It is working to secure further plots across London and is already in talks with other local authorities and housing associations.