Dutch firm MVRDV has broken ground on its first project in the US: a mixed-use “vertical village” made up of yellow, blue, red and green brickwork volumes.

Construction work has started on the 21,800-square-metre tower at 2420 Amsterdam Avenue, in the Washington Heights neighbourhood towards the northern tip of Manhattan.

Designed for local developer YoungWoo & Associates, the bold and blocky high-rise occupies a pivotal plot at one end of Washington Bridge, which runs over the Harlem River to connect to the Bronx. 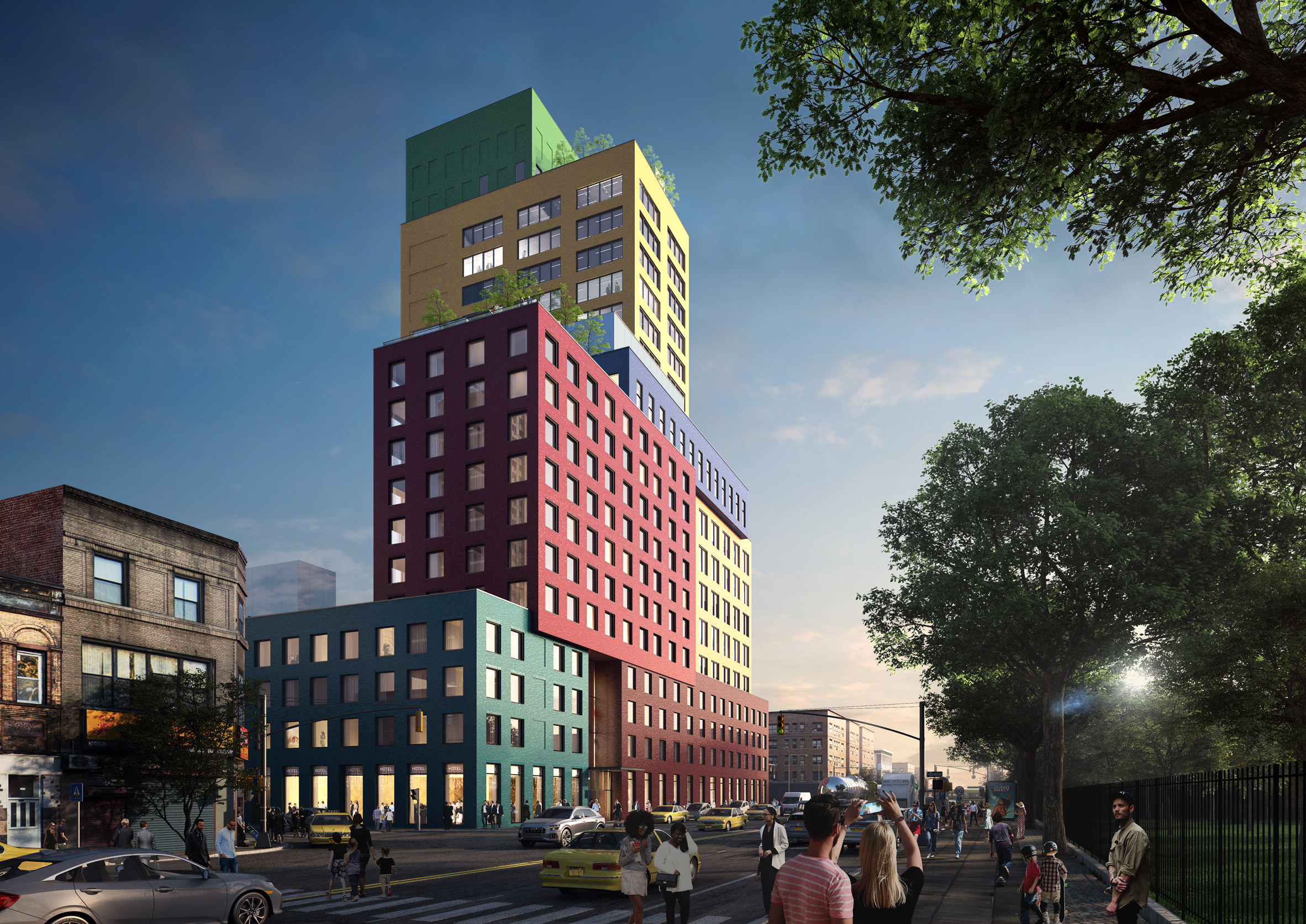 “Radio Tower & Hotel, located at the thinnest part of Manhattan Island between the Hudson and the Harlem River, is a colourful new building, which will strengthen an already wonderfully mixed and vibrant neighbourhood,” said MVRDV co-founder Winy Maas in a project description.

“It will be a colourful, welcoming beacon for people entering Manhattan.”

Radio Tower & Hotel will host a hotel, shops, offices and events spaces, which MVRDV has separated into different bold-coloured volumes that match the scale of the area’s built environment. 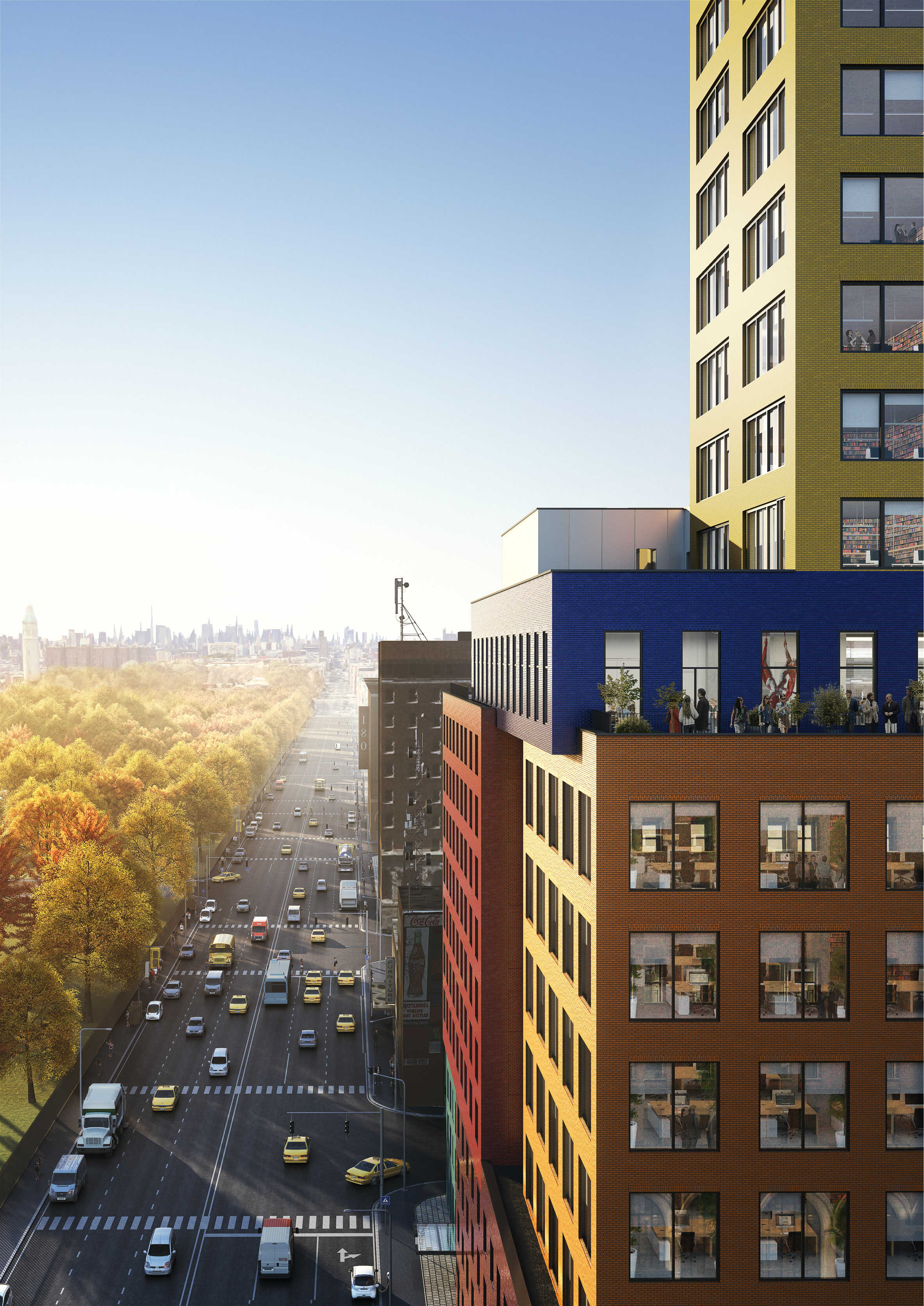 “The building forms a ‘vertical village’ with blocks that are the same size as the surrounding buildings, thus avoiding the common drawback of large developments in which new skyscrapers overwhelm the existing character of the city,” said Maas.

Renderings of the building show a pile of colourful cubes stacked to reach 22 storeys at the highest point.

The arrangement, which looks similar to giant blocks of Lego, is in keeping with the architecture firm’s playful style – following on from recent projects that include a reconfigurable hotel and a library shaped like a giant eye.

Ceramic bricks in red, green, blue and yellow tones will provide the colours of the facades, which the firm says pays homage to storefronts in the surrounding area. 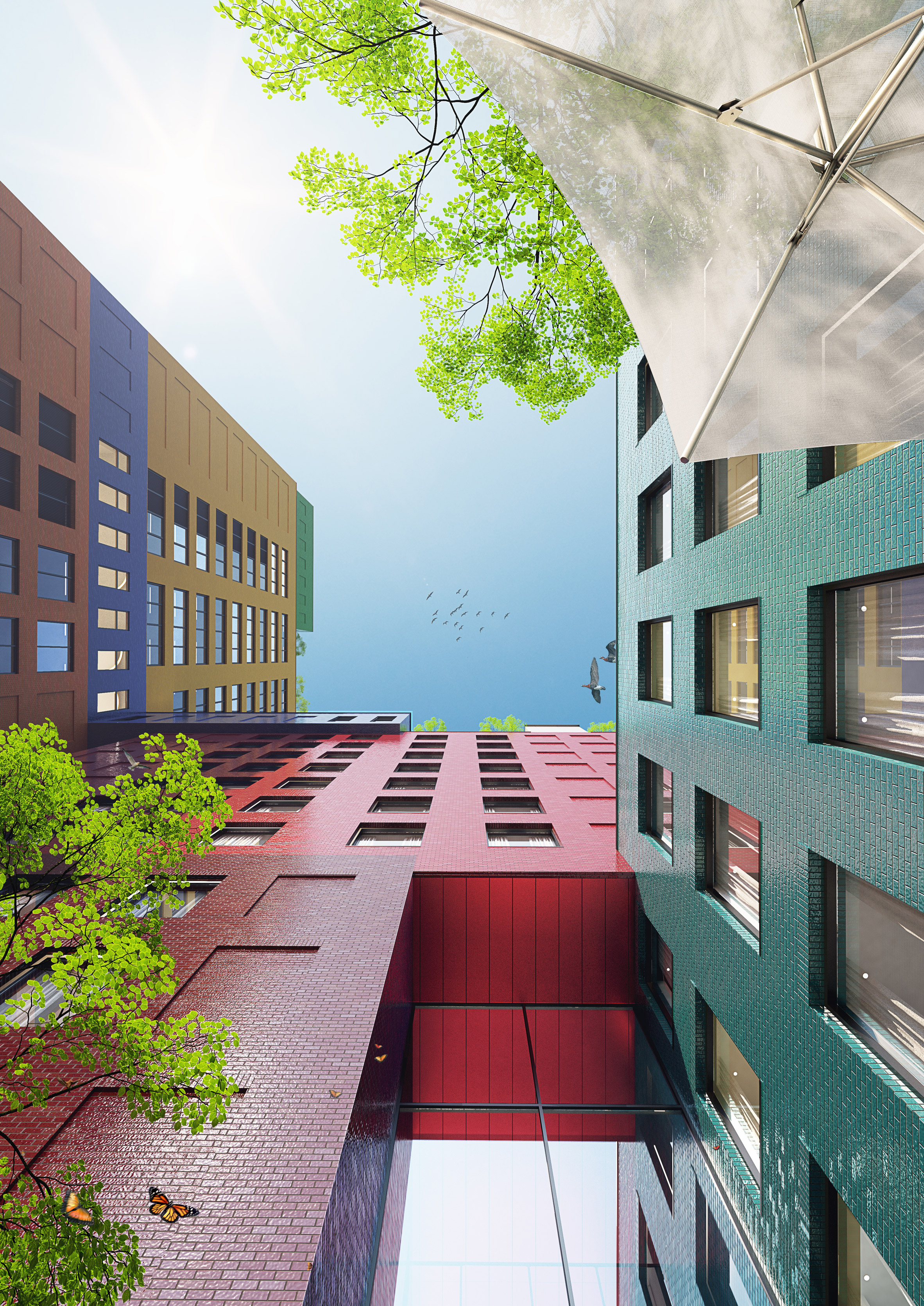 The shapes of the windows that will puncture the brickwork also draw on the surrounding architecture. These will be different for each block, ranging from small and large square openings to rectangles in different orientations.

Greenery will sprout from some of the rooftops, marking a series of terraces.

The reddish and dark green volumes will be occupied by the hotel. This will be the neighbourhood’s third, and will host those travelling to conferences at the nearby Yeshiva University and the New York Presbyterian Hospital. 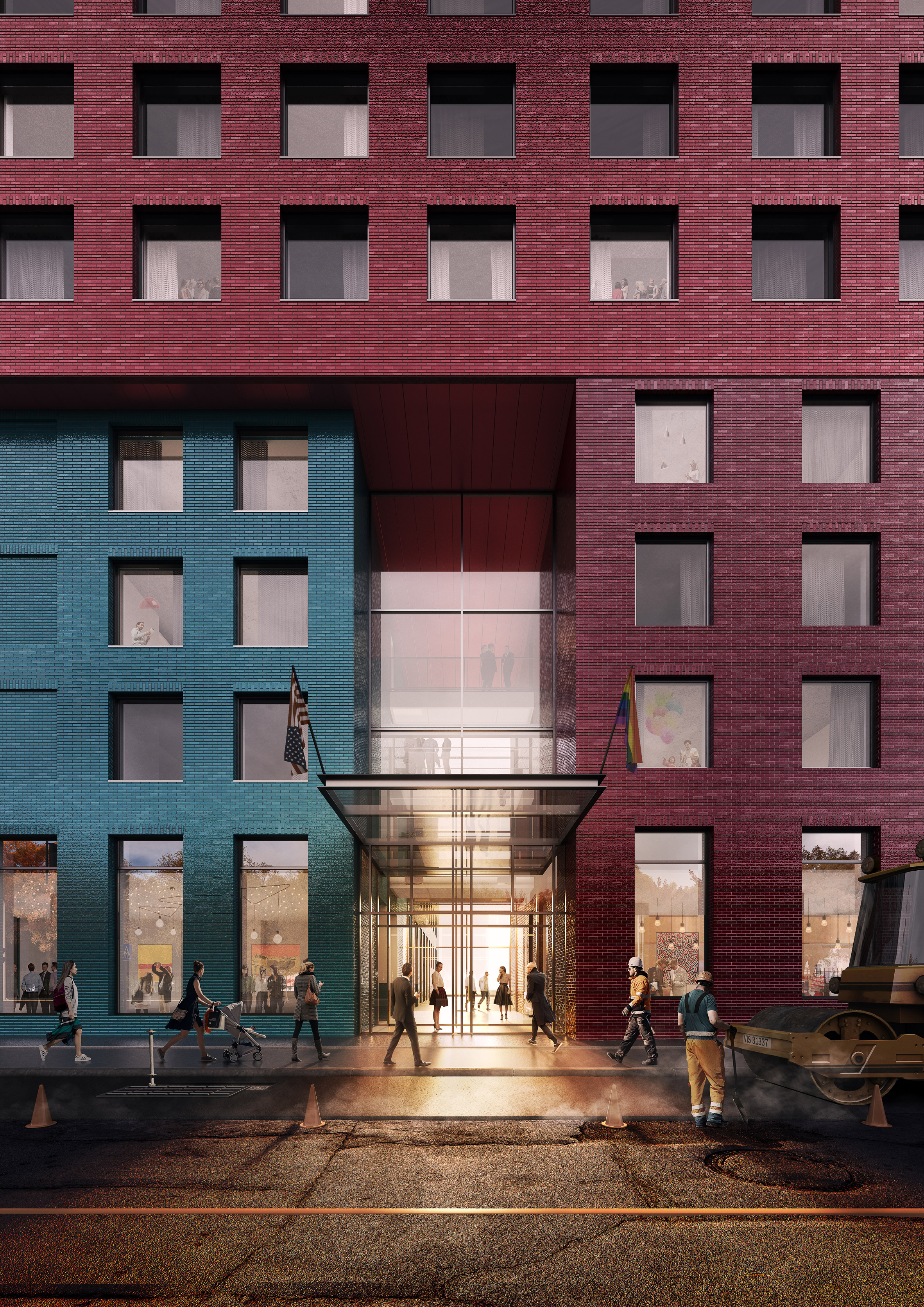 Two yellow blocks, and a small green volume set at the top of the tower, will contain offices, with a glazed stairway leading all the way up.

A slender blue volume sandwiched in the middle of the stack will house the events space.

Other areas of the building will be open to local residents, such as shops on the ground floor and a courtyard at the centre. 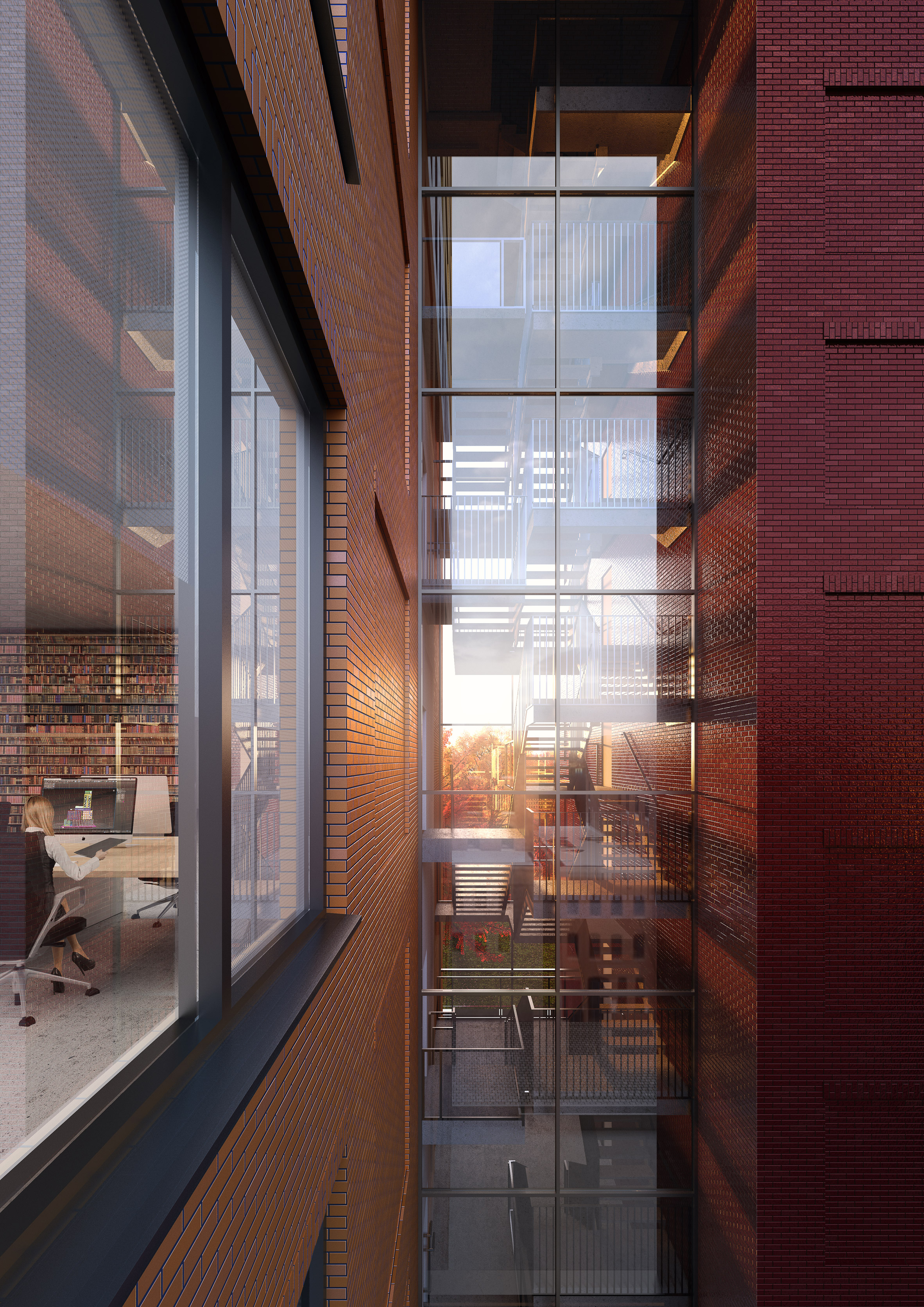 The Radio Tower & Hotel is slated for completion in 2021. Elsewhere, the Rotterdam-headquartered firm that Maas established with Jacob van Rijs and Nathalie de Vries has gained a reputation for its unexpected architectural gestures.

Several of MVDRV’s most recent experimental projects are located in Asia, including a shimmering shopping centre in Beijing, and an indoor theme park in Seoul with facades that incorporate elements of nearby buildings.