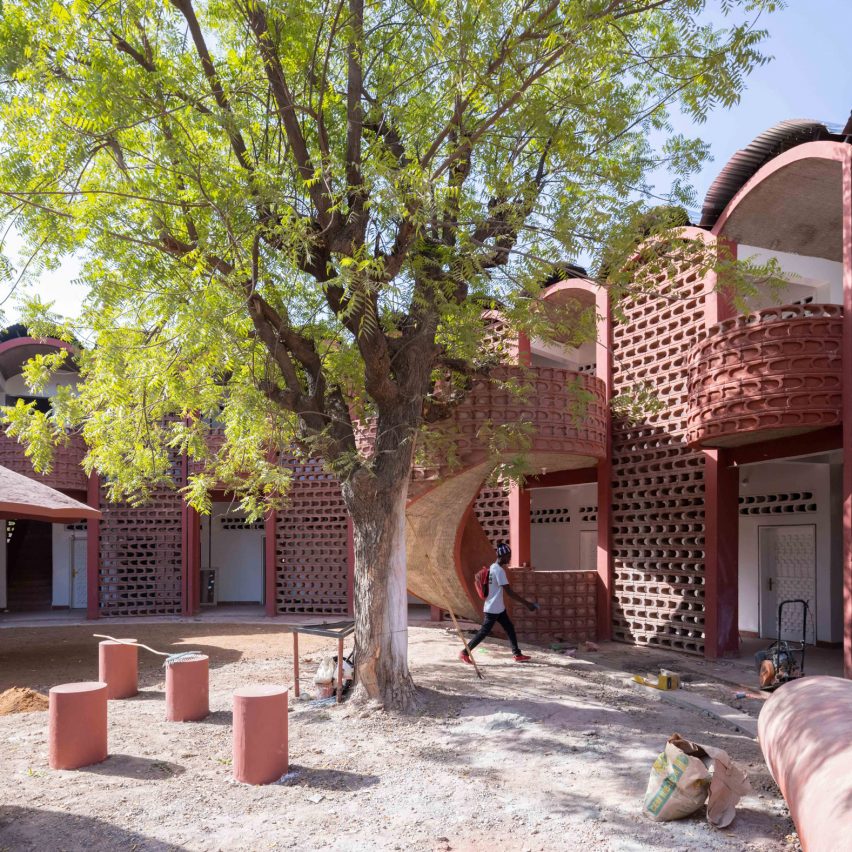 Swiss studio Manuel Herz Architects has unveiled the curvilinear Maternity and Paediatric Hospital in Tambacounda, Senegal, which is defined by its lattice-like brickwork.

Built as an extension to a hospital in the town of Tambacounda in eastern Senegal, the building, commissioned by the Josef and Anni Albers Foundation and local charity Le Korsa, contains paediatrics and maternity clinics.

The block’s distinctive S-shape was informed both by the region’s climate, which can see temperatures rise to 45 degrees Celsius, and the rounded forms of the existing hospital buildings.

“I developed a design for a building in a curvilinear shape that is as long as possible and as thin as possible,” explained Manuel Herz Architects founder Manuel Herz.

“The building’s curvilinear shape is a direct reaction to the existing circular hospital buildings,” he told Dezeen. “It embraces them, curves around them, creating several new exterior courtyards.”

The two-storey building, which has the maternity wards on the ground floor and the paediatric wards above, contains a total of 150 beds, several incubators, two operation blocks and intensive care units.

A corridor with rooms on only one side runs along the length of the building. It is enclosed by a brick lattice structure that was informed by screens used to enclose mashrabiyas in traditional Arabic architecture and designed so that air can freely flow into it.

“The thinness is in direct response to the climate,” said Herz. “I intended to create a building that does not need air-conditioning – apart from the operation block and the intensive care units.”

“The brise-soleil keeps the sun and rain out and lets the air move laterally across and through the building.”

This sheltered corridor combined with latticework bricks used to break the walls of the wards encourages air to flow through the building.

“My intention was to develop a building that shades its interior, keeps sun and rain out while allowing wind to pass through,” continued Herz.

“The temperature differences between slightly hotter cooler and more shaded cooler areas create air movement. The building is, therefore, its own climate machine, creating a local micro-climate that is more temperate than its surrounding.”

As Herz and his studio did not have an in-depth knowledge of the Senegalese climate, he developed the design in close collaboration with local doctors, engineers, contractors, and craftsmen and women.

“When I was approached to participate in the competition for the new hospital, I was initially sceptical,” he explained. “How can I, as an architect based in Basel, develop a design proposal, and hence suggest a ‘solution’ for a region that I have never visited for a climate that I have not experienced?”

“Rather than handing in a definitive ‘solution’, I instead proposed a process to approach the project, that is embedded in research about the local condition, and that relies on collaboration with local partners,” he continued.

“We developed an architectural response that tries to work with the climate and not against it. In this way, the building is much more responsive to the local condition and resilient to power outages, or the need for technical maintenance.”

Along with designing the block as a response to the Senegalese climate, the studio aimed to ensure the hospital was built using local resources and materials sourced largely from the Tambacounda region.

“The only equipment that was imported were the medical arms for the operation rooms and some of the other medical technical equipment,” said Herz.

“This ensures that virtually the complete financial investment remains in the region, and benefits the local community. It also ensures that the building is seen as coming from within the community, and not imported from outside.”

As part of the development process, the studio and local contractor Magueye Ba created a small school in a nearby village from one of the hospital’s test facades. Alongside the hospital’s new wing a small playground and staff housing are also under construction.

“The project cannot be just reduced to the new hospital, but is thoroughly embedded in a local context on a cultural, social and economic level through many additional smaller and larger interventions,” added Herz.

“This ensures that neither myself, nor the hospital building, are seen as foreign ‘aliens’, but are well immersed in a local setting.”