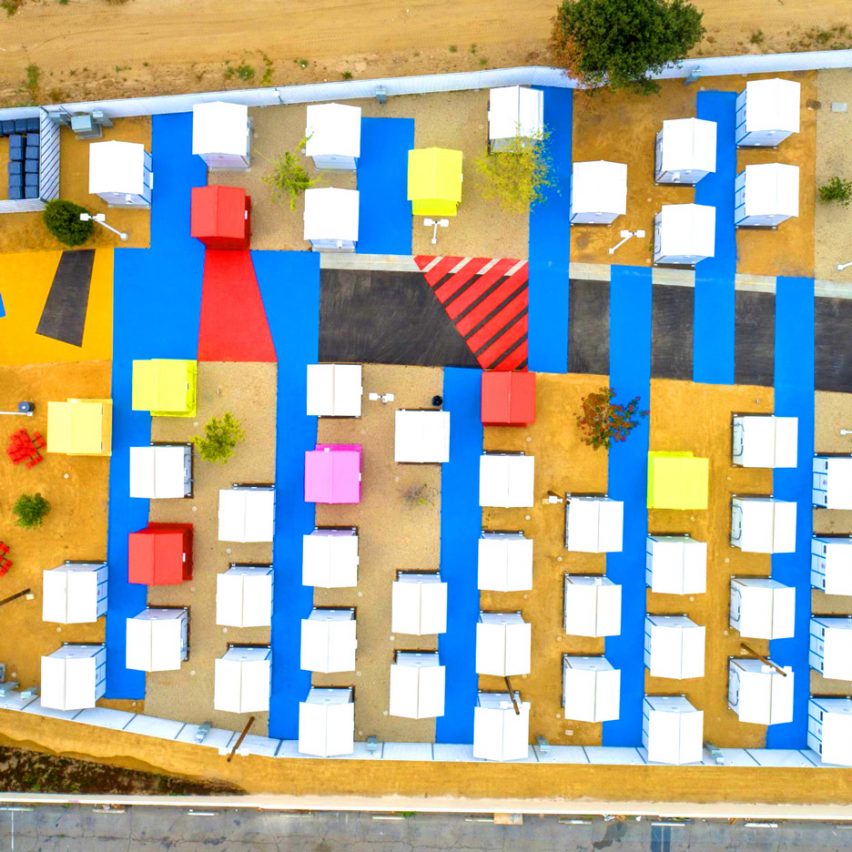 Located on a narrow plot in a park in North Hollywood, the brightly coloured complex can house up to 200 people at a time in its gabled shelters.

The eight-foot-wide (2.4 metres) square-shaped cabins, which can accommodate one or two people, are made by Pallet, a manufacturer of homeless shelters based in Washington State.

Alexandria Park Tiny Home Village is named after the park it sits in, near the 170 Freeway. The project is a collaboration between local practice Lehrer Architects and architects and engineers from the Los Angeles City Bureau of Engineering.

“LA is surely among the most vibrant laboratories in the world today to be designing and building projects in — big, small permanent, transitional – to remediate and eliminate homelessness,” said studio founder Michael B. Lehrer.

Homelessness is a serious issue in Los Angeles, with high rents and a lack of affordable housing exacerbating the situation. The last annual homeless count for the city, made in June 2020, recorded 66,433 people living on the streets, in shelters or in vehicles.

“From design to policy to sweating bureaucratic and regulatory conflicts and challenges, this is an auspicious and unprecedented period of experimentation and idea churn, learning lessons fast and embracing those lessons from one project to the next,” added Lehrer, who founded his practice in 1985.

“It is thrilling to be here using our medium to give, develop and invent form and processes to transform LA into a fully housed city.”

Alexandria Park Tiny Home Village is arranged like a residential neighbourhood in miniature, with cabins arranged in rows on either side of a main street style thoroughfare.

Geometric blocks of yellow, blue, red and green cover the asphalt surfaces between the shelters, which are arranged in neighbourhood-style clusters marked by gravel surfaces.

In keeping with the cheerful colour scheme, some of the cabins have been painted and the rest left white.

To decide which cabins should be painted, Lehrer Architects took their architectural model and rolled a 3D camera down the central street. This helped them chose which cabins to paint to function as colourful markers as people walk through the complex.

Each of the cabins can be locked by the occupant to give them a sense of security and ownership, and there is a designated play area for pets.

Some of the prefabricated modular units contain facilities for the village’s occupants, including a communal dining area, showers and restrooms, a laundry, pest control services and a place to receive assistance with accessing the City services.

Oak trees from the park have been incorporated into the layout and more have been planted to create shady places for the residents to enjoy.

“This way residents do not have to exit the village to enjoy the park and the natural shade canopy,” said Lehrer Architects LA Partner Nerin Kadribegovic.

The village in the park only took 13 weeks to construct. Lehrer Architects had previously worked on a smaller pilot project for the scheme at Chandler Boulevard and applied the learnings to speed up the process.

“Being already familiar with these requirements enabled us to solve problems quickly and focus on making the Village an attractive and welcoming community.”

Later this month a third community designed by Lehrer Architects, Tiny Home Village Shelter at Sunset and Alvarado, will open on the city’s East Side.

More design to address homelessness in Los Angeles includes a concept for lockable domed shelters by Perkins and Will and Homes for Hope, a series of modular shelters designed by Madworkshop.