Sekino‘s Bangkok studio designed the property for a German photographer with an admiration of Bauhaus architecture – the style that emerged from the school founded by architect Walter Gropius. The client also wanted to be able to watch the sun set from every room in the house.

The team responded with a proposal for a five-bedroom villa, comprising a series of boxes that are arranged along the upper portion of the site. They call the project Baan Chan. 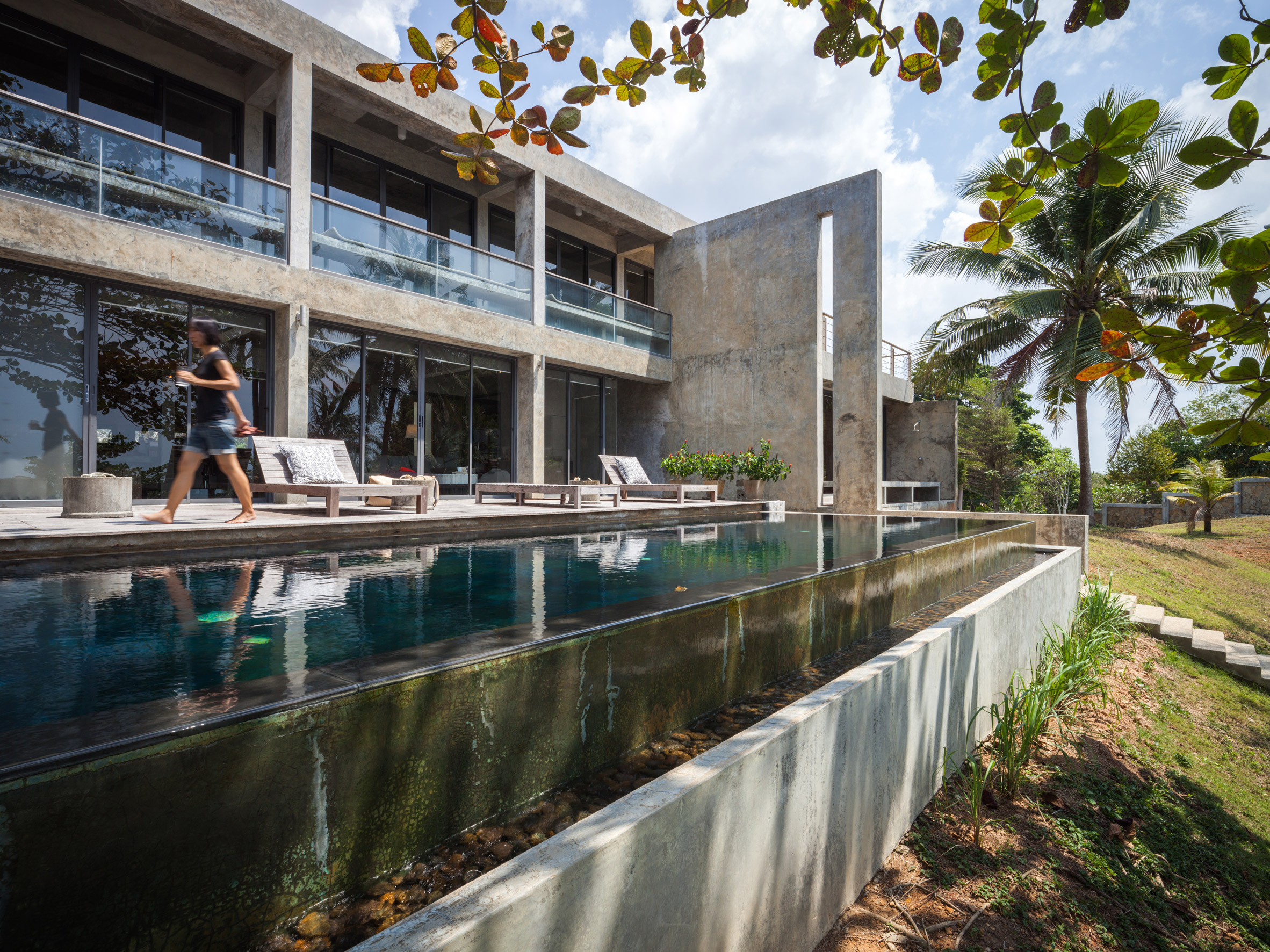 The house is located close to the shore of the Chanthaburi province, on a sloping plot that looks out past coconut trees and other foliage towards the Gulf of Thailand.

Set among tropical gardens with an infinity pool facing the sea, the building is intended to maximise the views and privacy afforded by the site. “The distinctive [form] inspired by the gentle waves of the ocean ensures the maximisation of natural light and airflow within the interior living spaces,” said the studio in a project statement.

Trees covering the cliff were removed to make way for the series of horizontal and vertical planes that define a sequence of rooms arranged parallel to the shoreline. 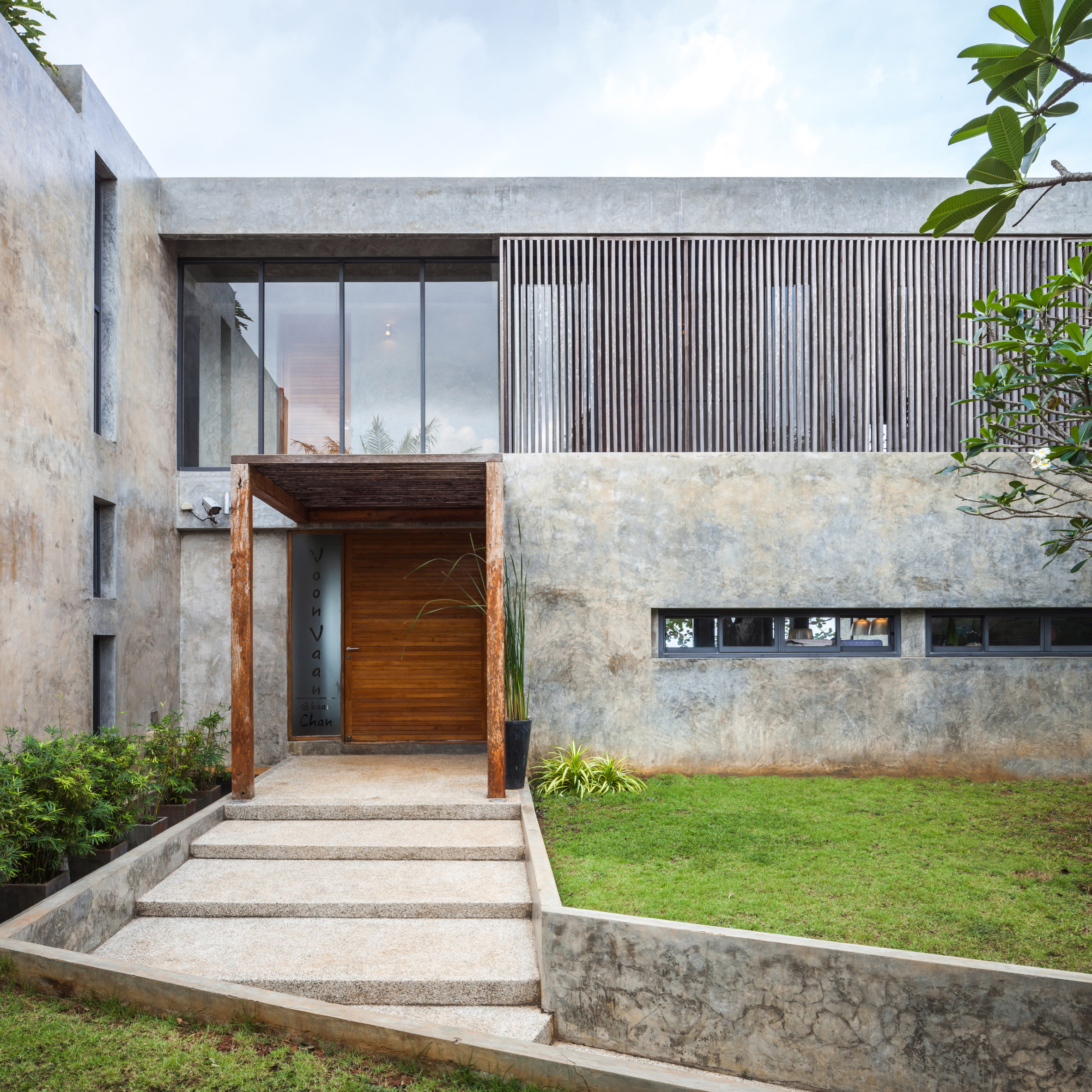 A large wall projects out from the front and rear of the building, forming the main separation between the internal areas. It flanks a passage that leads from the entrance through the property towards steps that descend to the beach. The front door is reached by ascending a flight of stone steps from the parking area. A separate stair branches off up the side of a hill leading to a small viewpoint with a pergola.

The entrance opens onto a hallway providing access to the open-plan living room, kitchen and dining space directly ahead, as well as to a wing containing two bedroom suites. 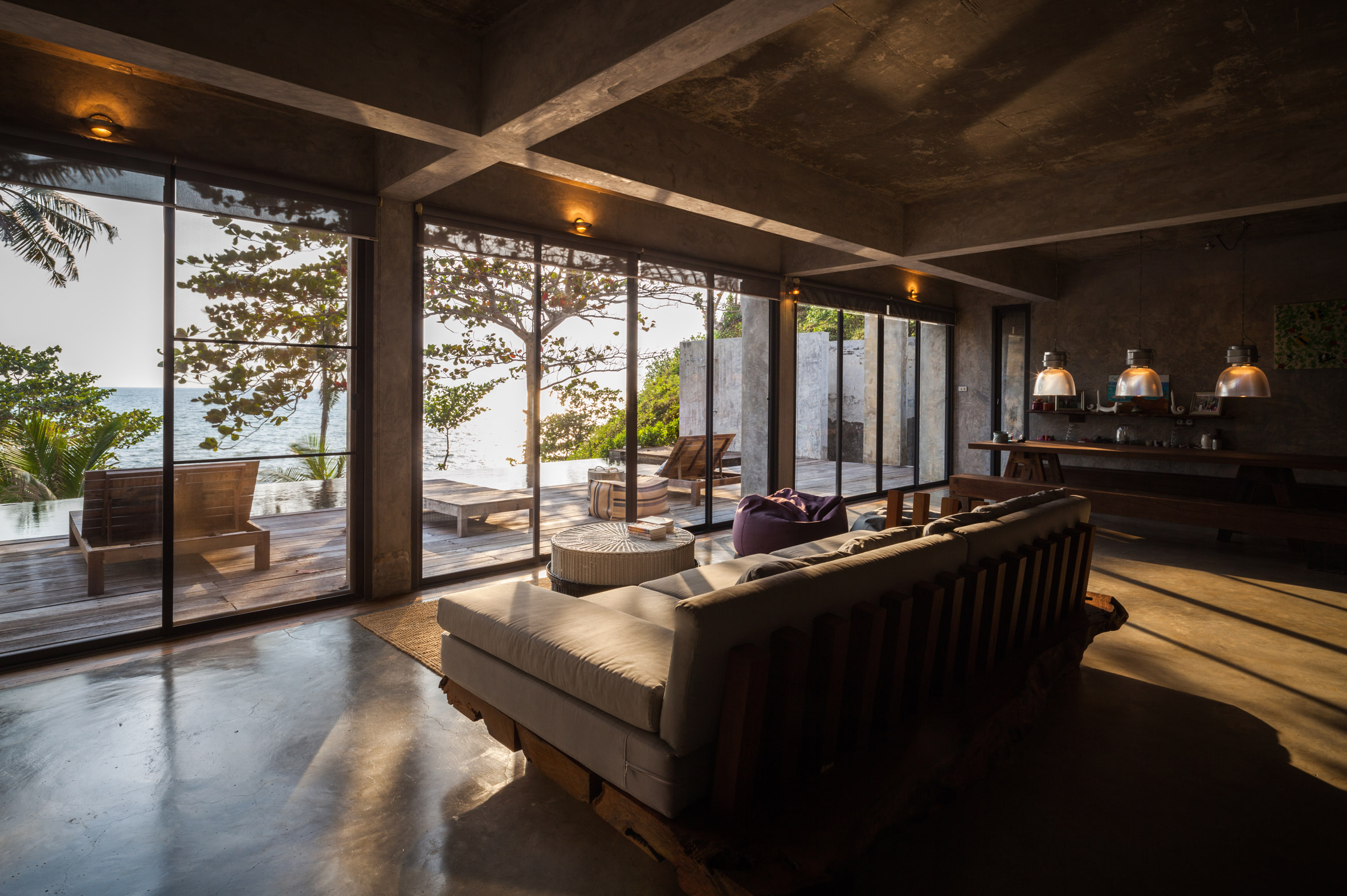 A staircase to the left of the entrance ascends to a first floor containing a row of three further bedrooms and a bathroom, with a large roof terrace situated on the other side of the large dividing wall.

The living space is lined with full-height sliding windows that open the room up to a large deck surrounding the swimming pool. Sunlight reflecting off the surface of the water reaches the interior through the glazed surface. 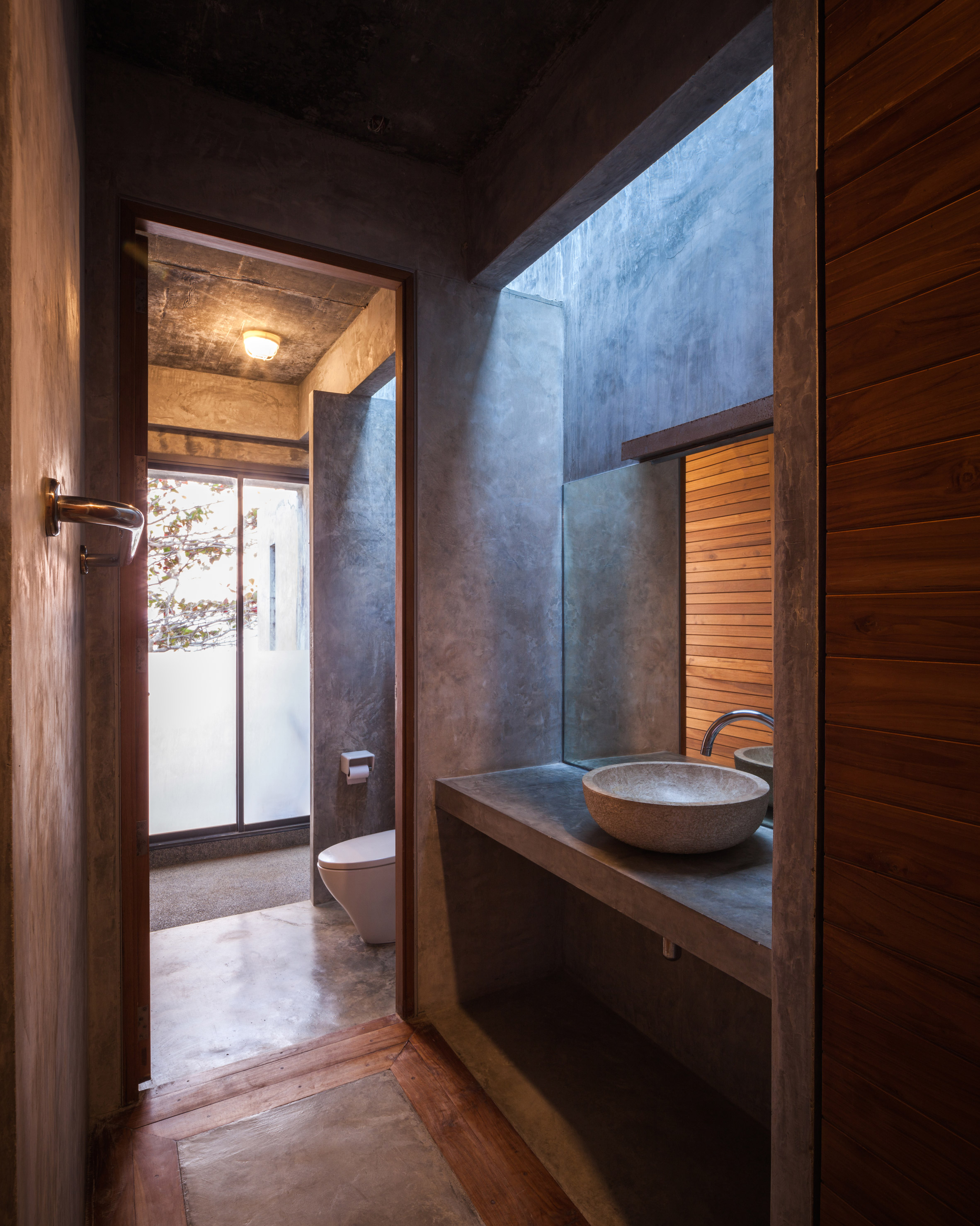 The owner’s appreciation of modernist architecture informed the use of exposed concrete, solid wood and an interior scheme distinguished by a lack of decoration.

“[The client] preferred to show the real material of all the elements and structures,” the architects added. “Owing to his line of work, he delights in the positive versus negative effect of the house.” 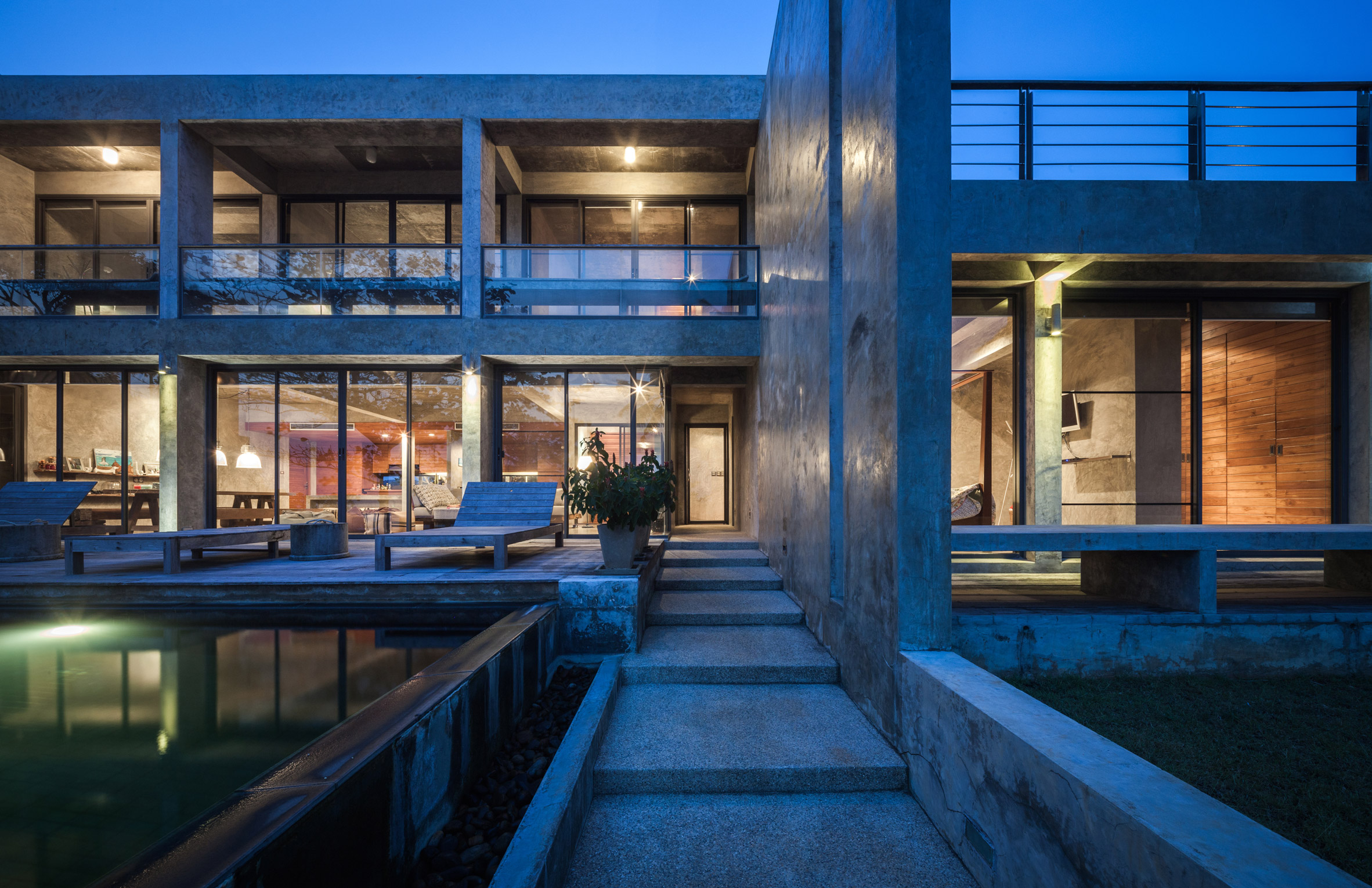 Materials applied throughout the building are chosen for their robust qualities and ability to withstand the seaside climate, as well as appearing attractive in their raw state.

Photography is by Spaceshift Studio.