Office furniture brand Haworth has created an experimental workspace for its leadership team, which shows how offices can be designed to help companies retain talented staff and be more innovative.

In the first in a new series of articles produced in collaboration with Haworth, we look at the Leadership Community Space, which was recently created at the company’s Michigan headquarters, One Haworth Center.

Described as a living lab, the project puts into practice Haworth’s extensive research into the links between office design and staff productivity. It functions as a testing ground, allowing the company to measure how interior design can affect productivity.

The design has proved so successful that it has helped the company recruit more talented staff – the head of Haworth’s human resources department, Ann Harten, described the building as “one of the best recruiting tools we have”.

“The building is quite a significant opportunity to attract and retain top talent,” explained John Scott, senior workplace design strategist for Haworth, and a driving force behind the renovation.

The design involved giving executives the opportunity to move out of their private offices, and into a more open environment geared towards collaboration. They can choose between a variety of formal and informal workspaces and meeting areas.

As a result, executives and staff interact more, and are able to find spaces suited to all of their different activities.

“It’s helping to take conversations out of their own private offices and bring them out into the open,” said Scott.

“It’s a change of setting, it’s a change of picture and it’s less formal. It takes away the idea of going to the principal’s office. It’s more intimate and personal. It’s a key aspect to that attraction and retention of staff.”

The ideas behind the project come from Haworth’s research into company culture, which is set out in the white paper How to Create a Successful Organisational Culture: Build It – Literally.

This research found that collaboration is essential for companies that rely on innovation. However upgrading a working environment to one that supports collaboration can only be successful if the new setup supports the organisational culture. And every culture is different, shaped by factors including the brand’s values, the type of work it produces, staff attitudes, and the physical and geographical setting.

In short, an office redesign that doesn’t consider the effect it will have on culture could be catastrophic for any company.

“Culture is the thing that gets in the way of innovation,” explained Haworth collaborator Rex Miller, whose pioneering book Change Your Space, Change Your Culture was one of the starting points for the white paper. 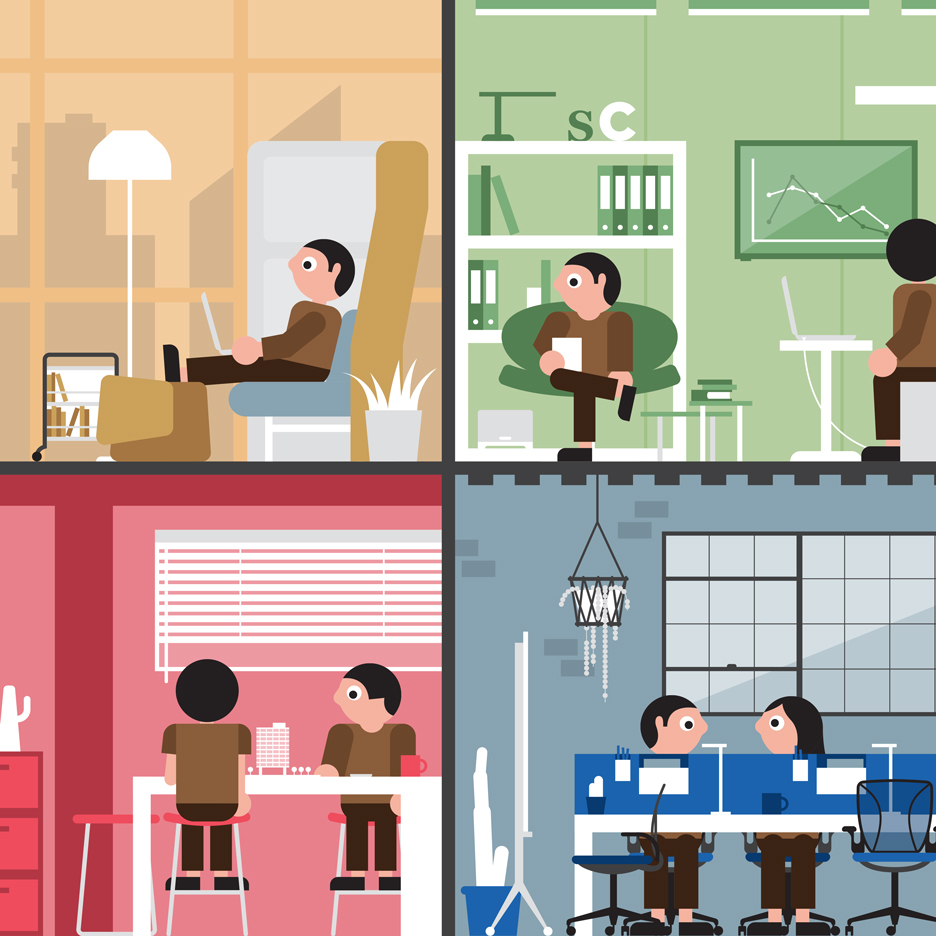 “When change gets implemented, legacy culture resists, fights back, is slow to move. So companies struggle to bring anything fundamentally new to the table, and by the next year they’re gone,” he continued.

“But space can be a powerful tool to disrupt legacy culture – the habits that you don’t want – and reinforce the behaviours you do want. We can use space to help break up the entitlements that people think they have and we can create really engaging open space, but we have to bring the culture along at the same pace.”

Flexibility and territory are key to helping staff adjust

Miller claims the key to successfully restructuring an office is equipping staff with the coping tools they need to function in the new environment – thus making them feel empowered.

“People can make the transition if you can give them a sense of what the new normal is going to feel like,” he explained.

Haworth’s solution to this was the The Change Communication Playbook, a guidebook where the company was able to share information about the renovation, and offer employees the opportunity to provide feedback and make suggestions.

But the company also introduced a series of subtler changes that helped staff to adjust.

Firstly, the new leadership space offered the notion of flexibility. Staff are free to move between different types of workspace, but are not required to – they are given the choice. Similarly, the introduction of reconfigurable platforms, moveable walls and modular furniture means space can be adapted. And workstations are fully adjustable to support seated or standing positions.

“I think having more choice increases the user’s overall satisfaction with the work that’s done,” said Scott. “Employees feel valued, and also have the ability to rest, relax and socialise as they need to.”

Another key feature of the new workspace is that, while collaboration is very much at the heart of the design, it still offers staff a sense of territory and belonging. Team leaders still have private offices, but these are managed more intelligently than before. Not only are they 30 per cent smaller (the company found they were hugely under-utilised in the past), they are also designed to double up as meeting rooms.

“Some people do change environments frequently, and others still have the need to be in one location,” said Scott.

“A lot of that depends on the type of working that they are doing; if they’re more internally connected they may need to have one place where people can easily find them, whereas if they’re externally focused, their location depends upon what they’re doing.”

According to Imogen Privett – a PHD candidate at the Royal College of Art, and an expert in workplace design – this combination of ownership and flexibility is something that Haworth’s workplace shares with some of the most successful co-working spaces.

Privett said that one of the best examples of this typology is Second Home, an exclusive London creative community housed inside a building that was radically overhauled by Spanish architecture duo Selgascano.

“People talk about Second Home as being really inspirational and feel proud to be part of that space,” Privett told Dezeen.

She observed that people are so happy to be a part of Second Home, they are willing to overlook things that don’t work for them. For instance, she saw one worker playing what he called “the chair game”, which involved trying out a selection of the 600 different chairs the building boasts until he found one that suited him.

“Sometimes being able to mitigate discomfort by making choices can make a difference. You can get away with things not being perfect if you have a little bit of control over your response to it, rather than being left completely stuck,” she said.

“At Second Home, just being able to be there may slightly outweigh any discomfort people may feel,” she said. “And people have definitely found workarounds.”

However Haworth wasn’t willing to take that risk. Through LENS, an assessment tool the company developed, staff are able to provide regular feedback about what is and isn’t working in the space – so the design is able to continuously evolve.

Not only does this help staff feel their input is valued, it also demonstrates to clients that the company is at the forefront of new ideas.

“We used the LENS tool before we made any changes,” said Scott. “And, once everyone had been in for six or so months, we came back and asked the same questions, and were able to compare.”

“It really showed that improvements had been made and that we were doing the things that needed to be done. And it still gave us some things to think about, to continue enhancing, for the future.”

Haworth will present its research into organisational culture with a showcase for this year’s edition of trade fair Neocon. Taking place at the brand’s Chicago showroom, the exhibition will explore spaces suited to two different culture types.

This is part of a series of articles produced by Dezeen in collaboration with Haworth, based on the company’s white paper research documents. These documents are intended to help clients develop tailor-made office solutions in times of dramatic change.