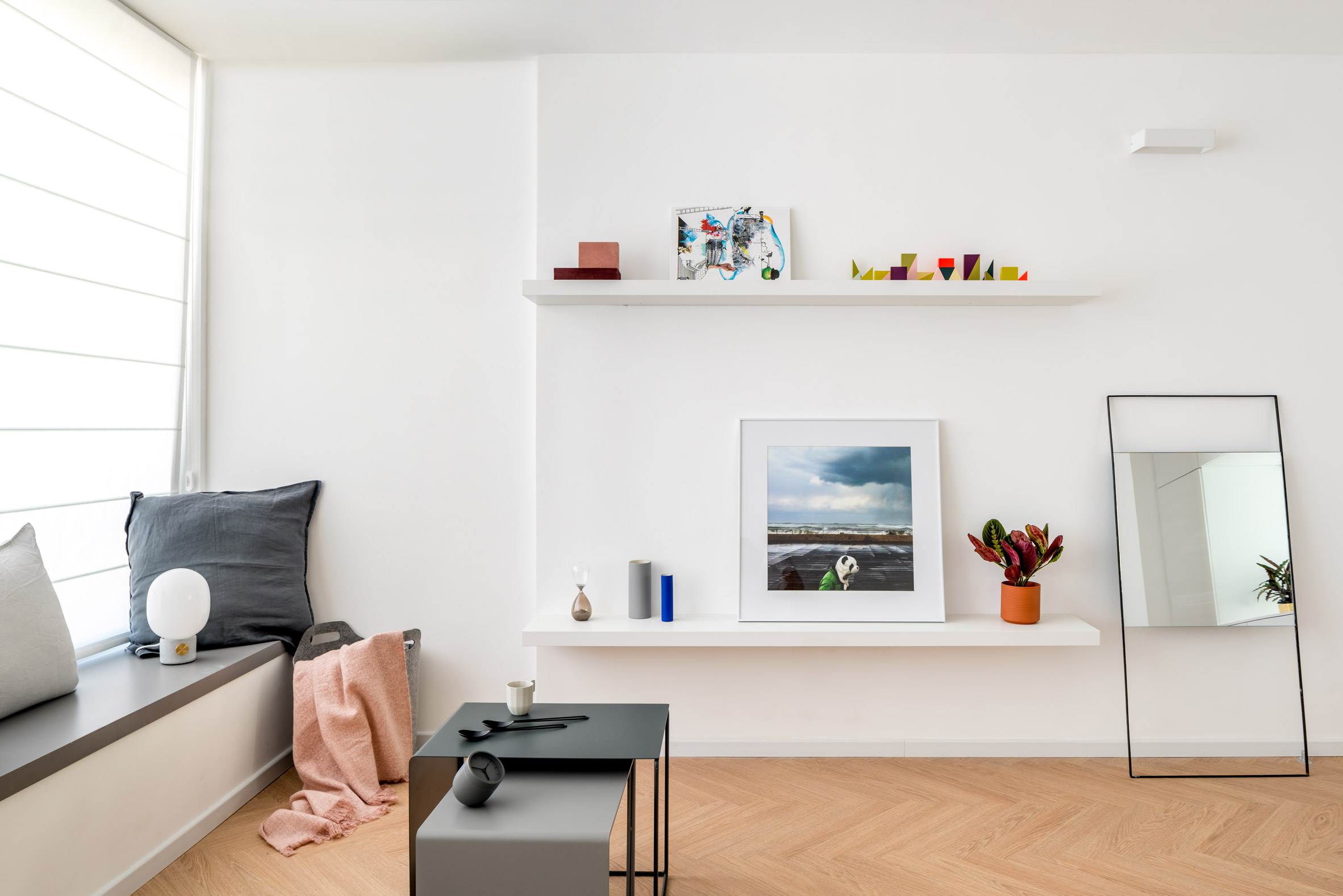 The 50-square-metre apartment, which was purchased by its owners as an investment, is due to be rebuilt in three years but will be let out to tenants in the meantime. With this in mind, the owners did not want to invest too much money in its refurbishment.

Working within a very low budget, Dar made minimal structural changes and used inexpensive materials to complete the project. 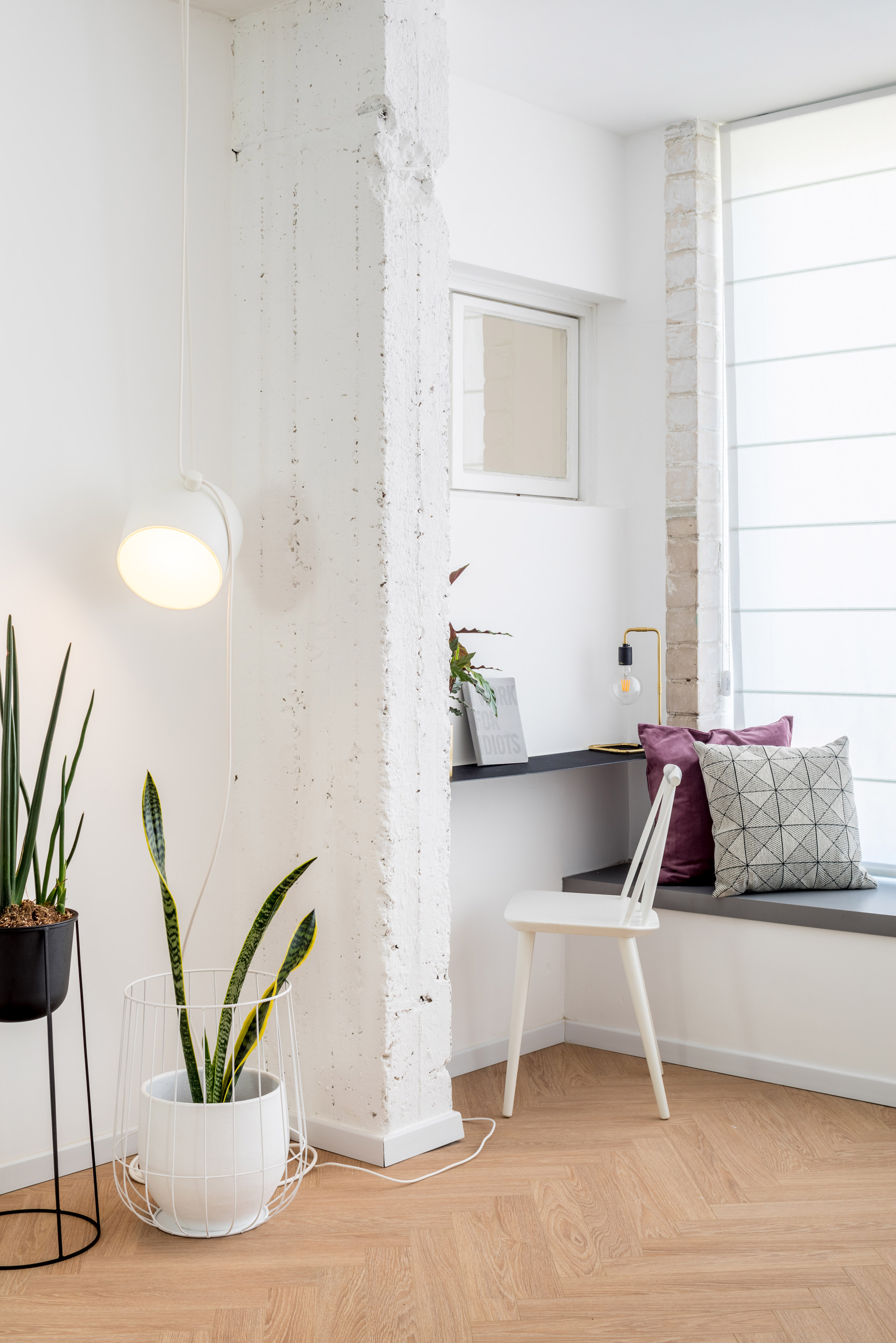 “Since it was not clear who would be the tenants, it was decided that the apartment would have to fit both a family and single tenants,” said the designer. “the main goal was to create an open, bright and airy ‘loft’ and with a pleasant, spacious and modern public space including a wide range of storage possibilities.”

The wall between the lounge and the apartment’s closed balcony was removed to create a larger living space, and a built-in padded window seat that spans the entire width of the room was added. 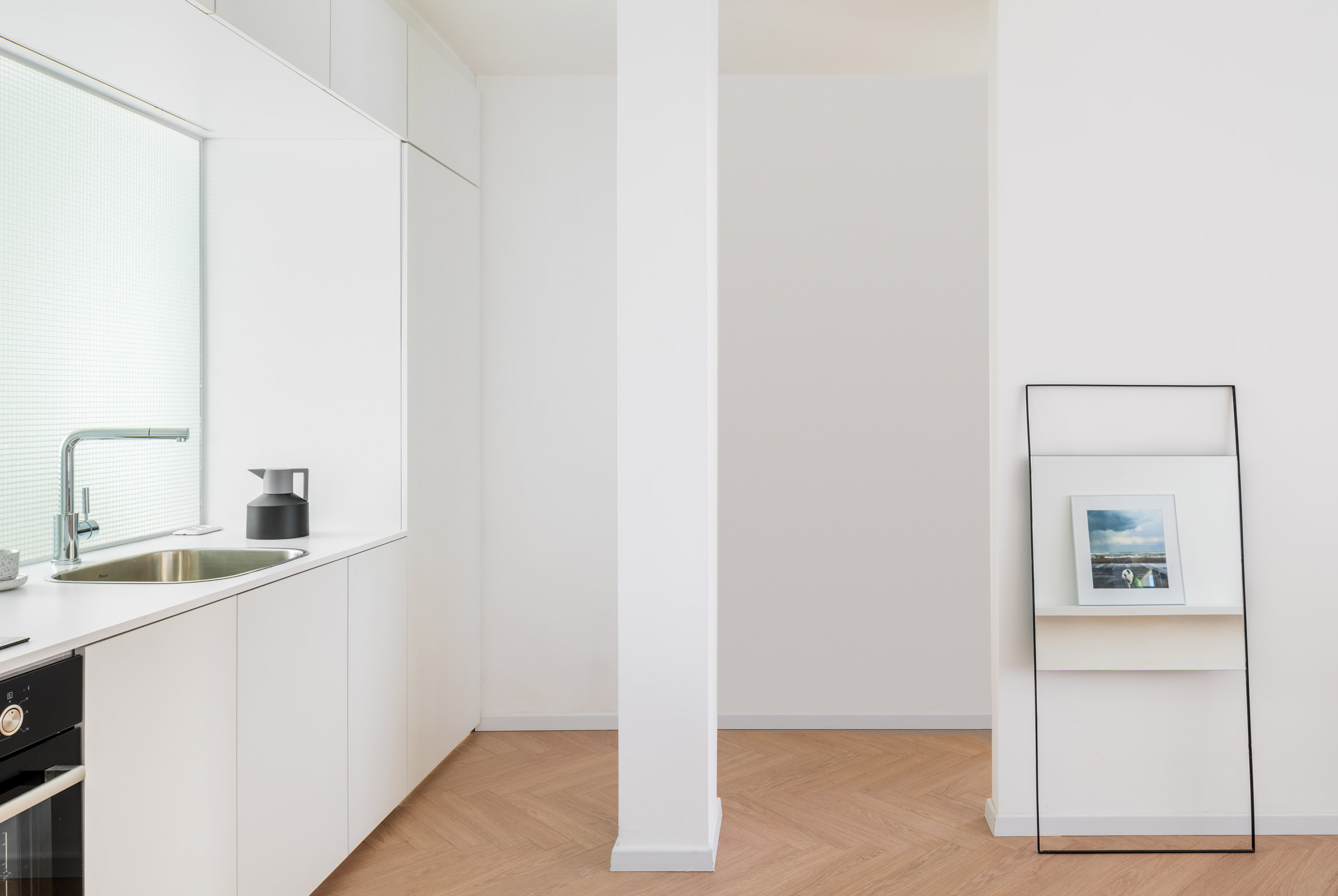 Some of the apartment’s original features, such as a concrete post and a brick wall, were kept and restored in order to preserve its character. Meanwhile others were replaced, such as the flooring, which was swapped for whitewashed oak-coloured laminated parquet laid in a herringbone pattern.

Due to budget constraints, Dar was unable to move the sewage receptor from its original location, so instead replanned the kitchen. 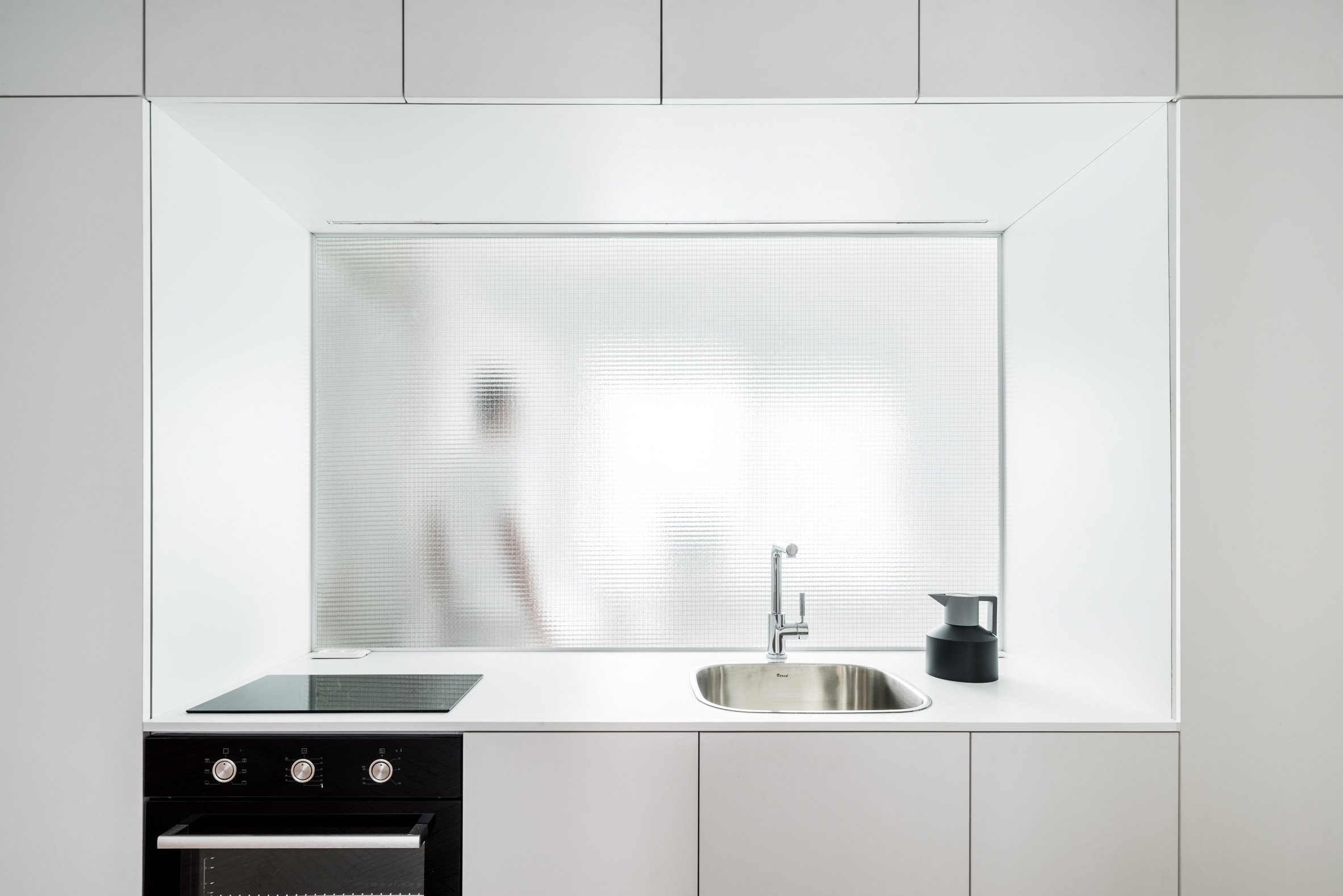 “I created a two-way carpentry wall, which is the central element in the apartment,” said Dar. Made from a sheet of tempered glass – 113 centimetres high and 208 centimetres wide – the wall divides the kitchen and the narrow bathroom space, while letting light from the bathroom window infiltrate into the cooking area.

“The only thing that separates the kitchen and the public space from the bathroom is glass,” continued Dar. “And no – you cannot see anything through the glass. Privacy is still preserved.” 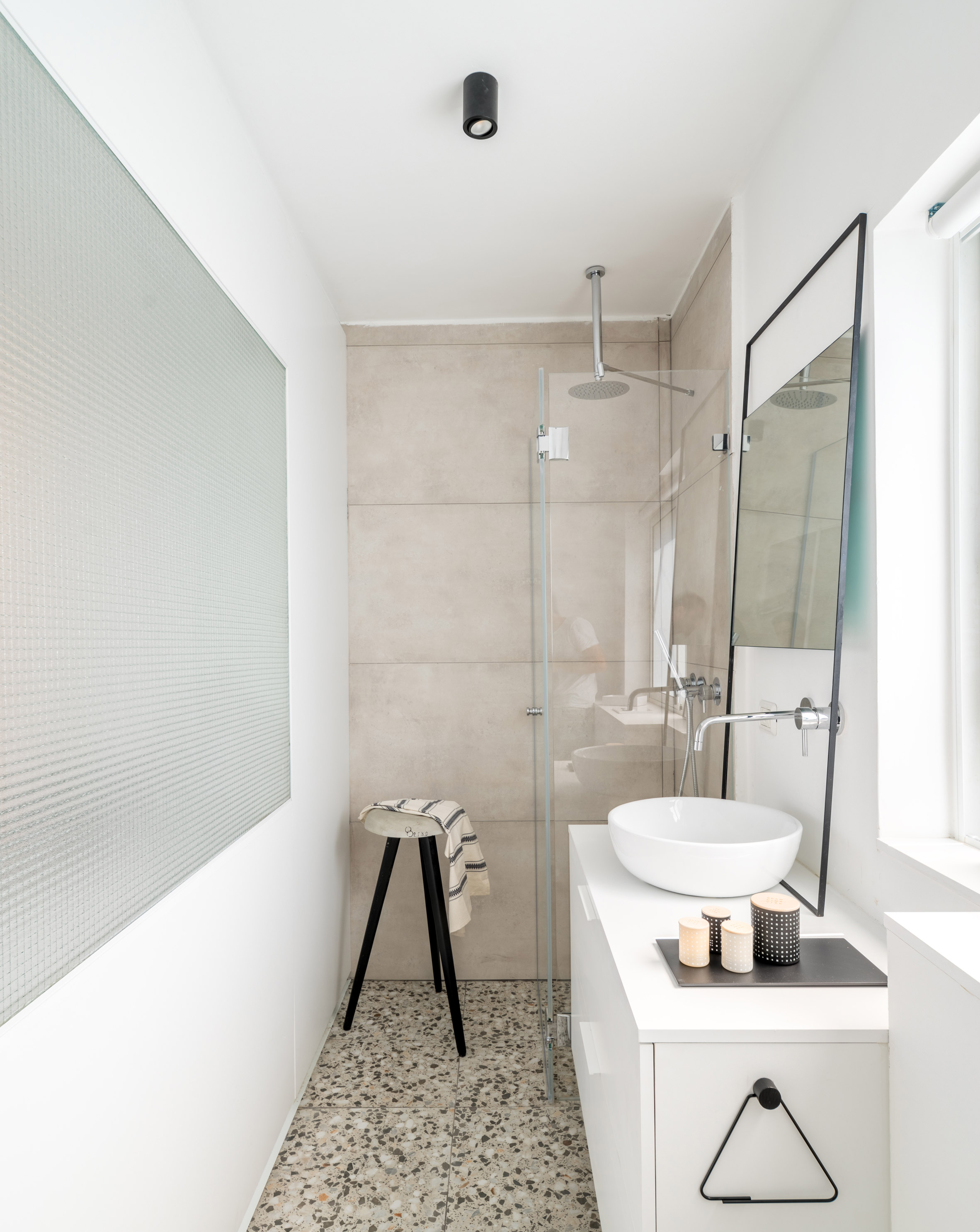 Dar has previously worked with interior designer Maayan Zusman and architect Amir Navon, from Israeli design school 6B Studio, as part of its mentoring programme. Together they transformed a rundown apartment into an airy space punctuated by delicate black frames and furnishings.

Photography is by: Peled Studios 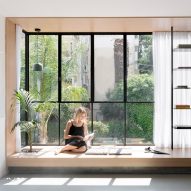