A funnel-shaped copper roof and subterranean swimming pool feature in this west London home, which Gianni Botsford Architects has slotted behind a 19th century townhouse. 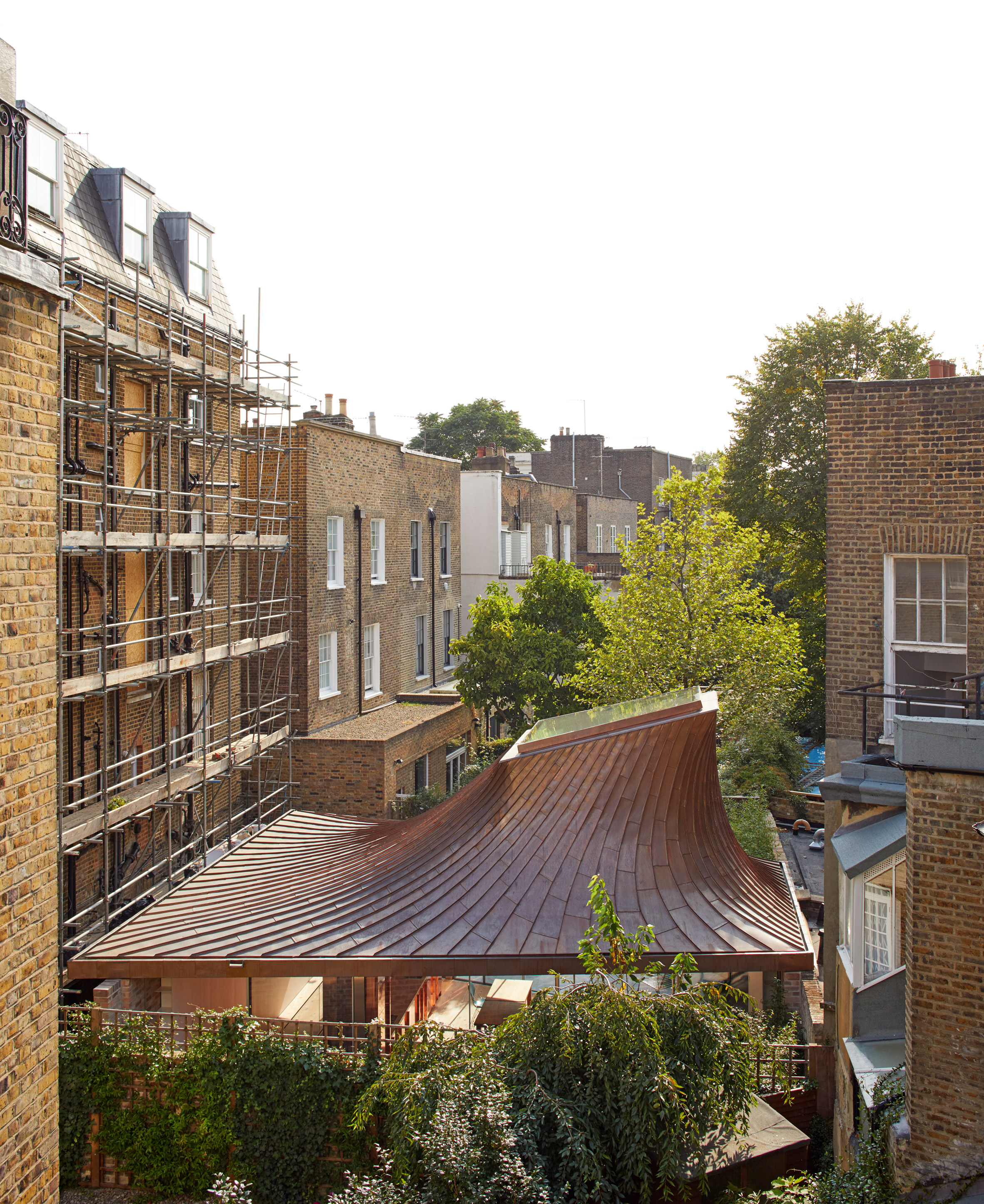 The project – which, due to its location, has aptly been named House in a Garden – is situated at the back of an 1840s brick townhouse in London’s affluent Notting Hill neighbourhood.

Architect Gianni Botsford has lived in the top floor flat of the townhouse overlooking a characterless bungalow that stood behind the property since 2003, and was keen to make better use of the land.

Over an eight-year planning and building process, Botsford and his team demolished the bungalow for its owner and replaced it with a partly subterranean home topped by a sweeping wooden roof clad in strips of copper. 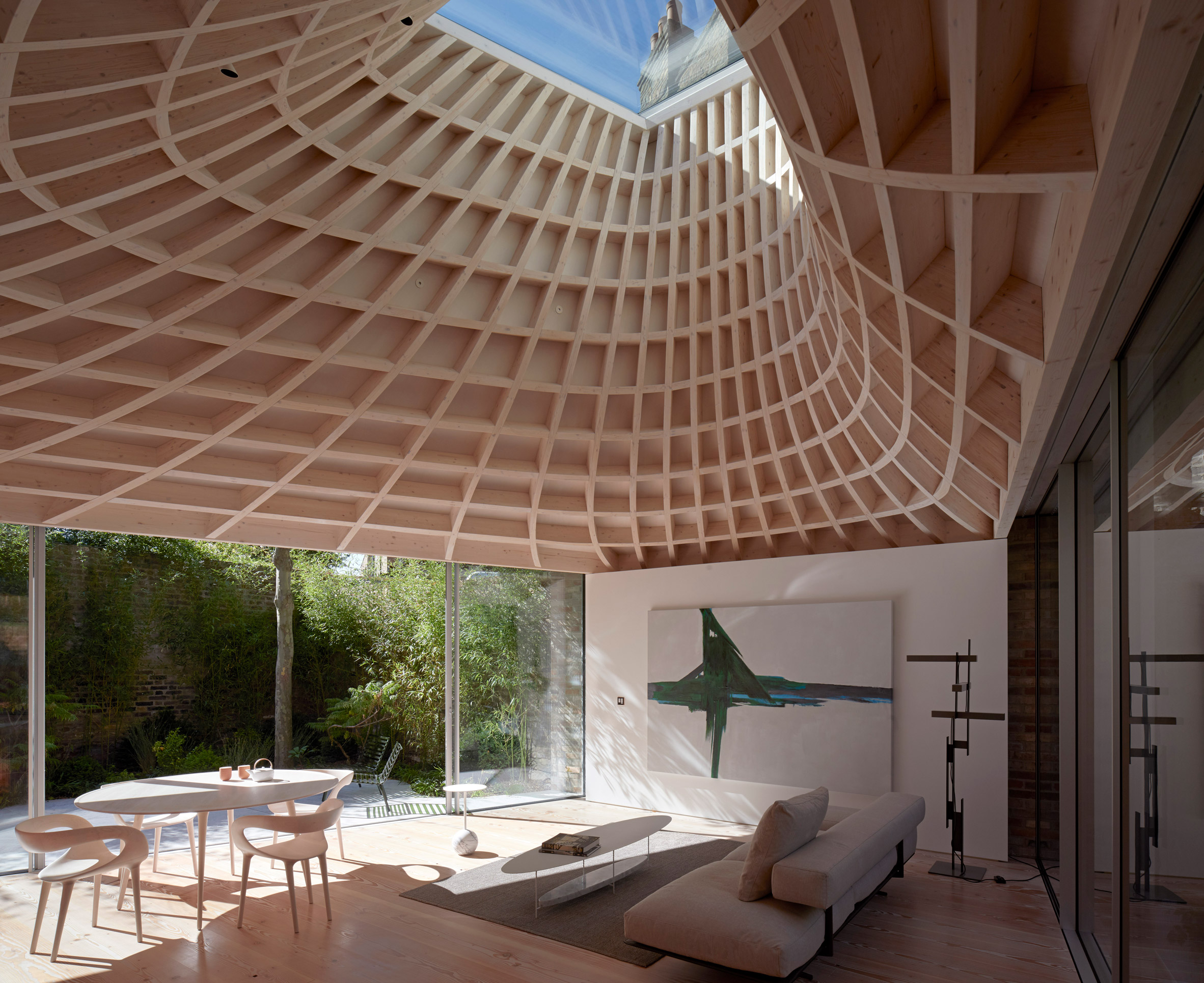 “Shaped and informed by the light and shadow that surround it, the roof’s tent-like form creates a new place for life to occur in the house,” explained Botsford.

“As a natural material mined from the earth, copper also resonates well with the idea of much of the house being shaped underground.” 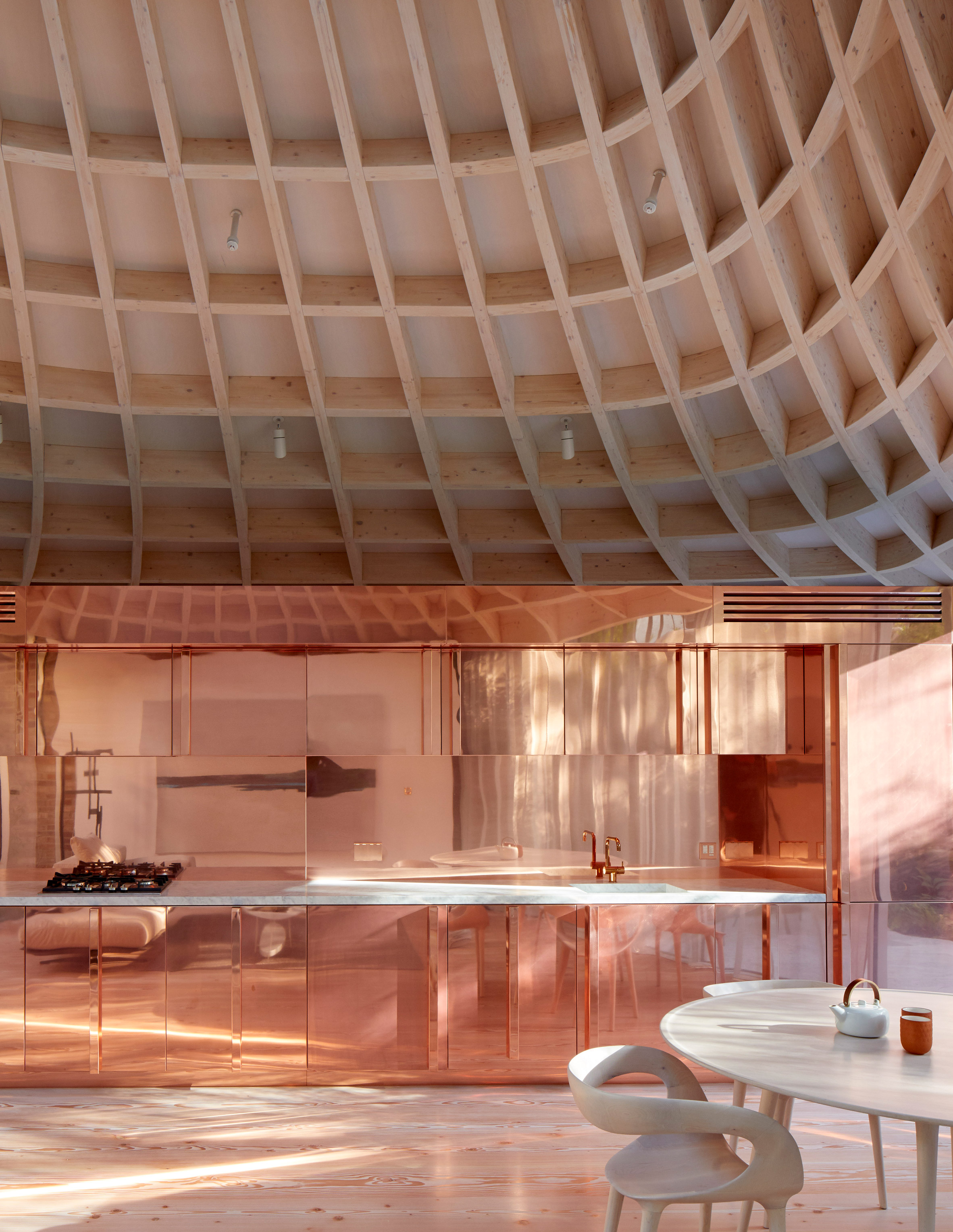 The roof was prefabricated in the Dolomites before being craned into the garden. Its structure – which is crafted from glue-laminated timber – has been left exposed on its underside, forming a decorative ceiling in the glass-walled living and dining area that sits directly below.

This room also features a kitchen with copper cabinets, splash back and tap faucets. 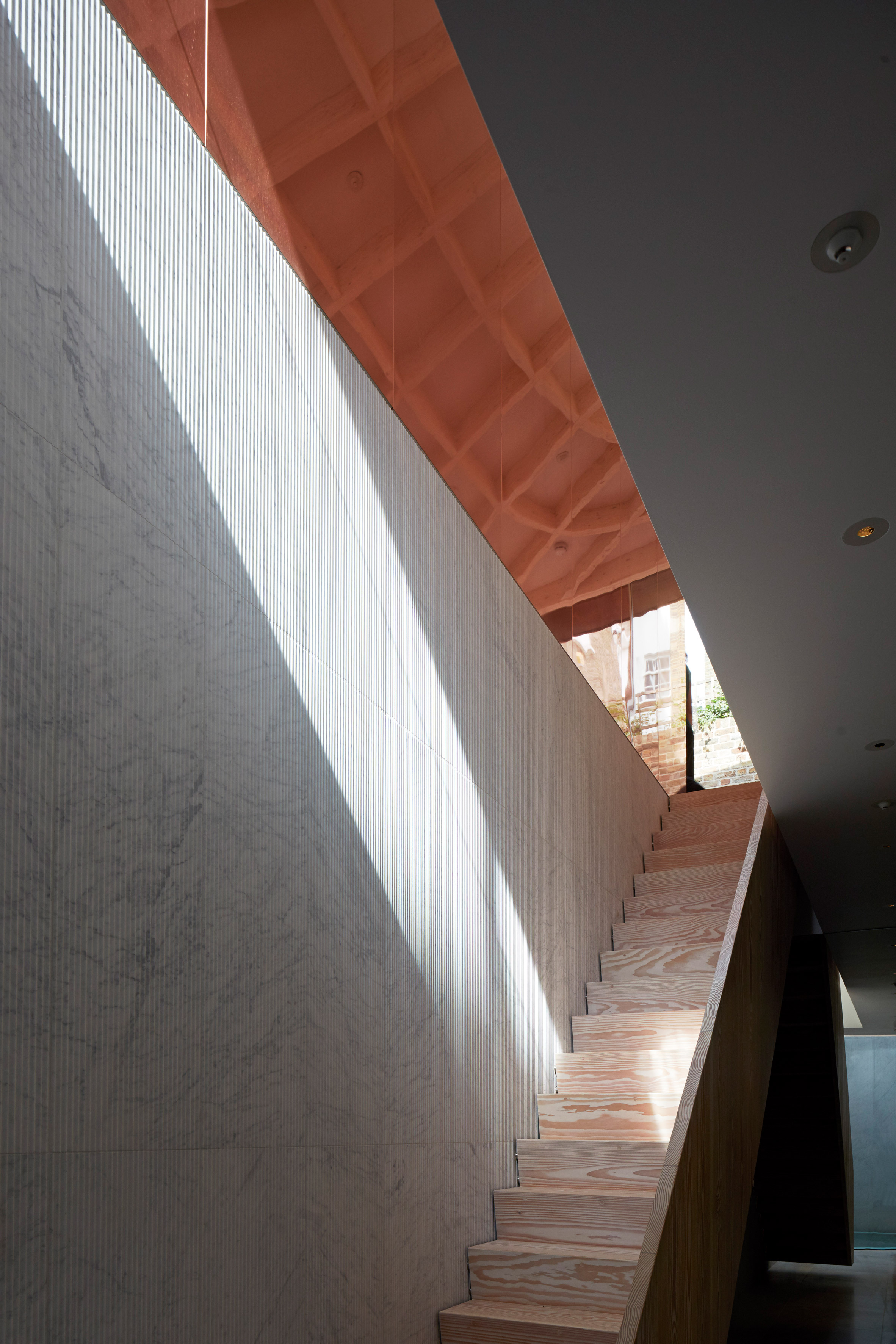 A suspended wooden staircase leads down to a master bedroom suite. Here the architect has created a greenery-filled lightwell to prevent the north-facing rooms from seeming dark and dingy.

Another skylight has been integrated into the base of the lightwell, to illuminate the 10-metre swimming pool that lies underneath in the lower basement. 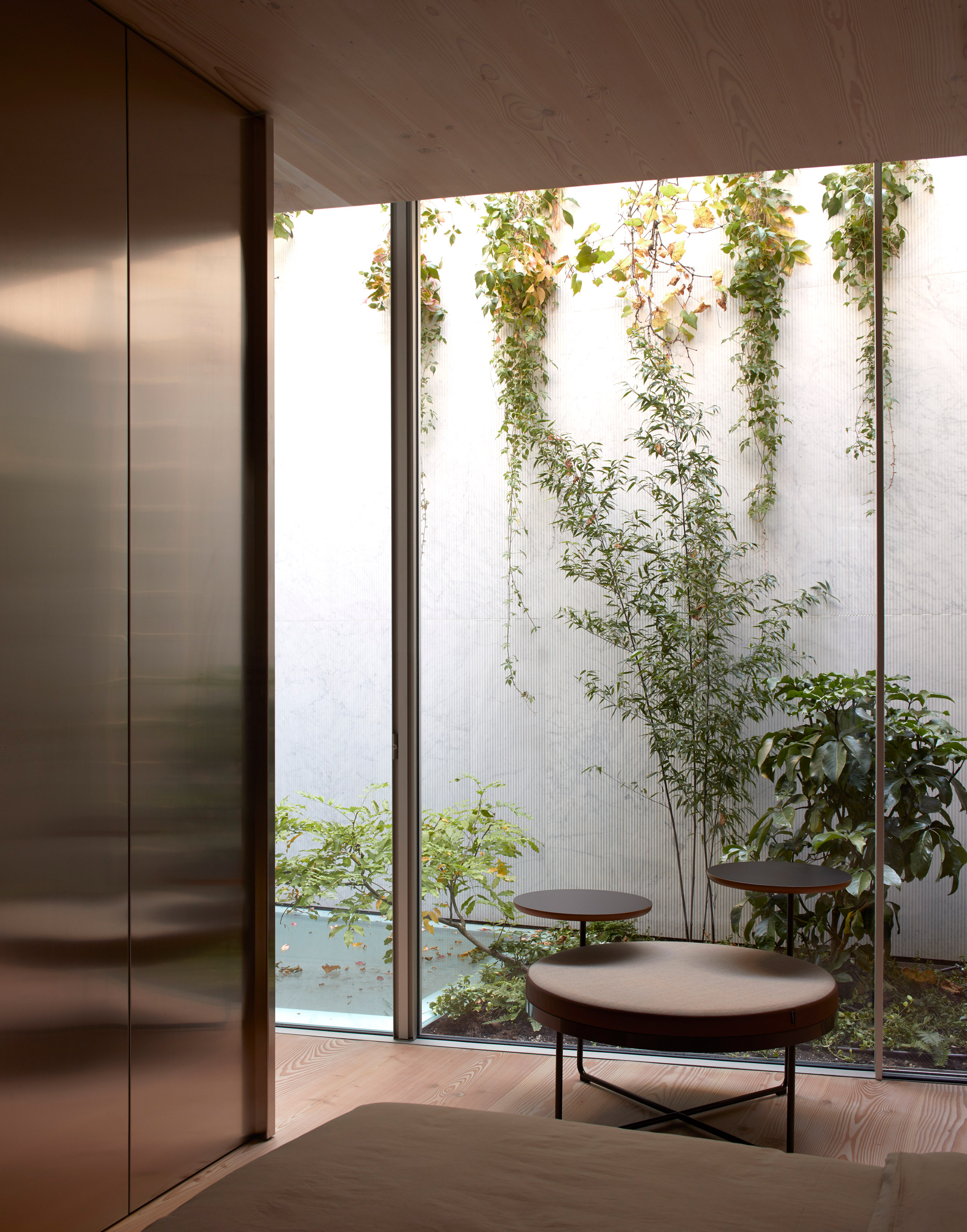 “[The project] builds on our earlier preoccupations with the manipulation of natural light throughout the day and through the seasons, enriching, enlivening and ultimately defining the nature of the architecture,” said the practice.

“To build with light and darkness is to work with what a context gives you a unique set of constraints and opportunities.” 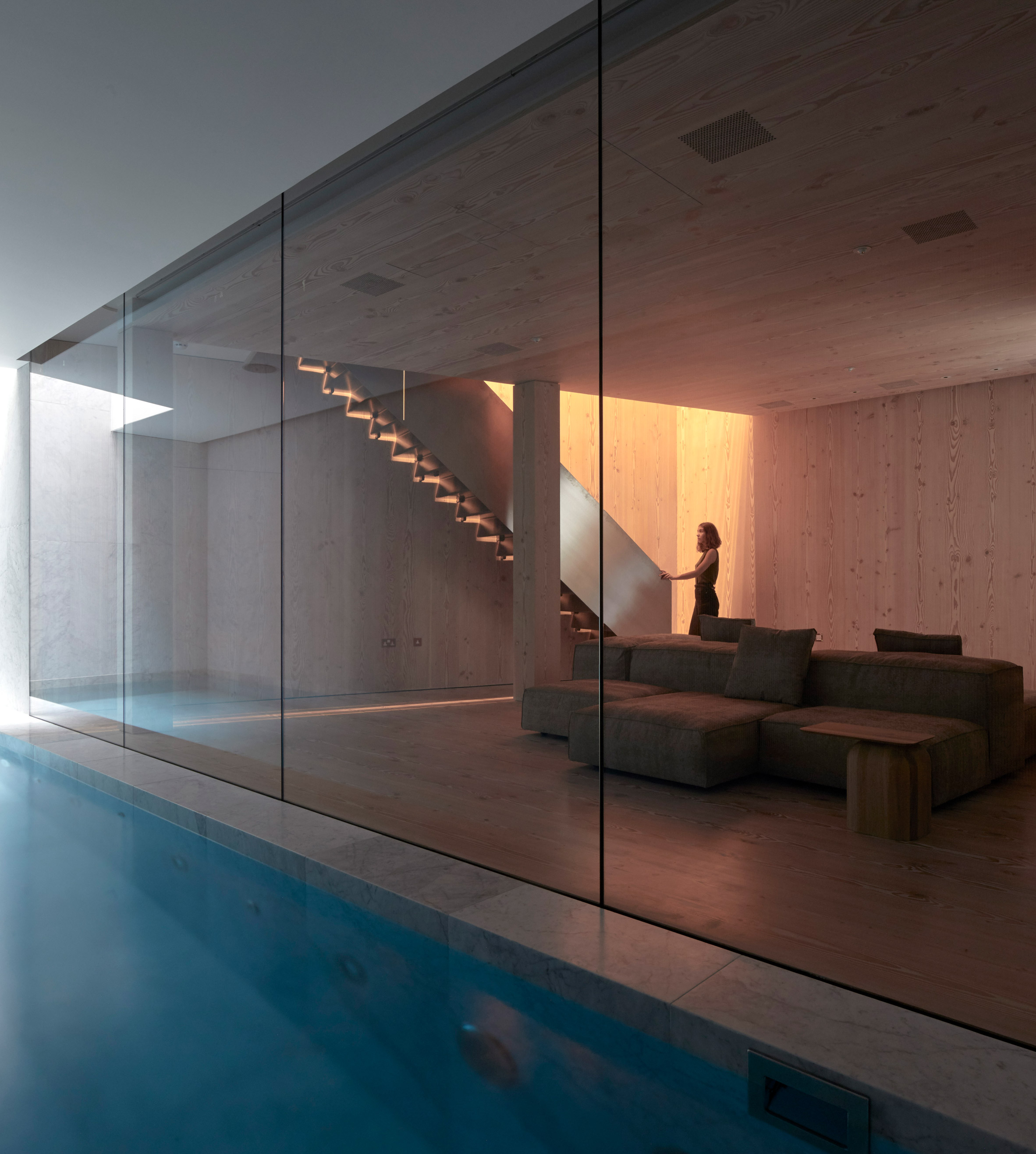 Adjacent to the pool is what the architects describe as a gallery-style sitting area that’s centred by a huge stone-coloured sofa.

A majority of surfaces at this level have been covered with grooved panels of grey Carrara marble or Douglas fir wood, intended to add a “sensual quality” to the interiors. 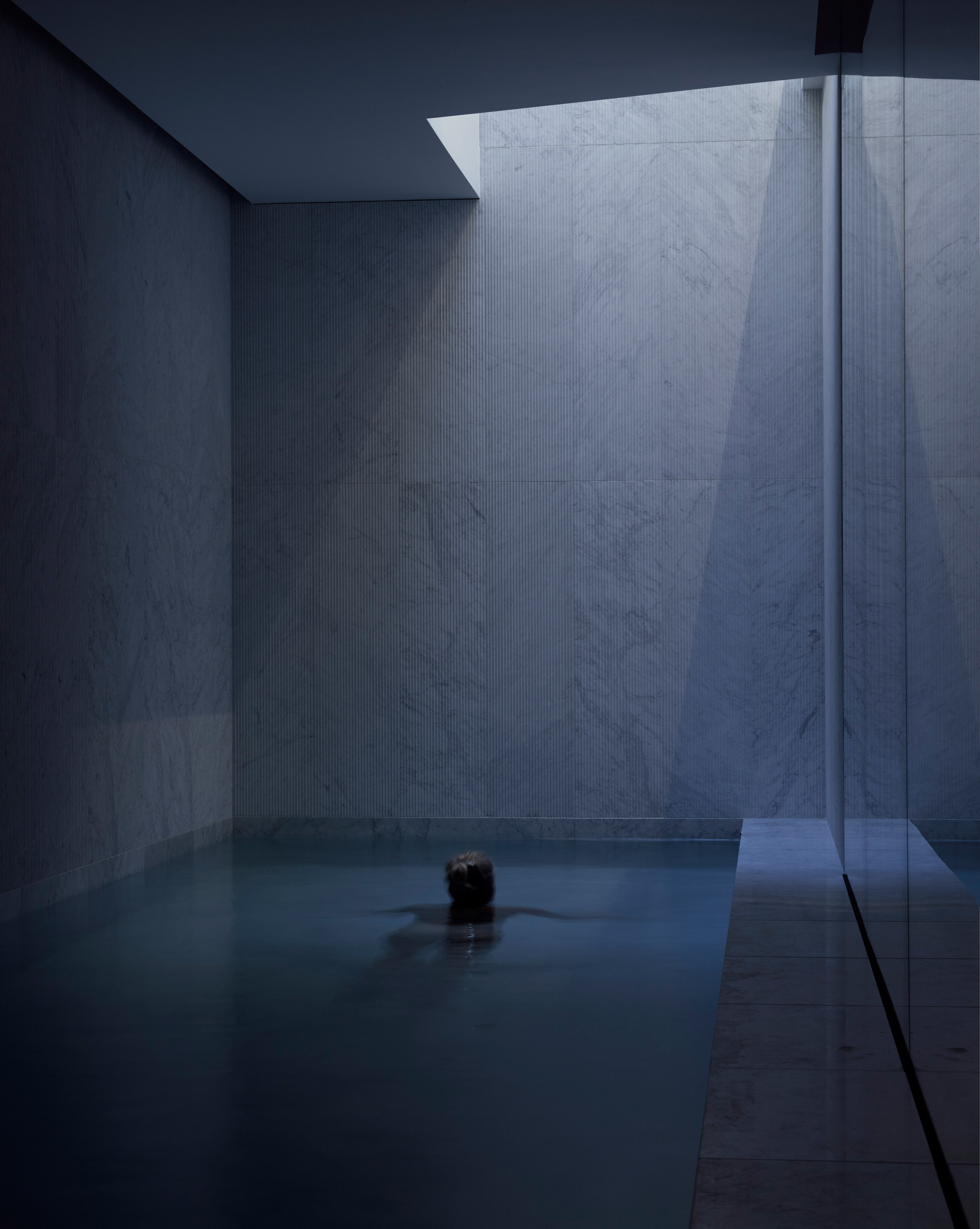 Last year Gianni Botsford Architects expanded a Grade II-listed home in central London to make room for the owner’s extensive collection of photographs and prints – the extension’s facade was made from weathered steel, which the practice chose for its ability to evoke the “notion of ageing”.

Photography is by Edmund Sumner.