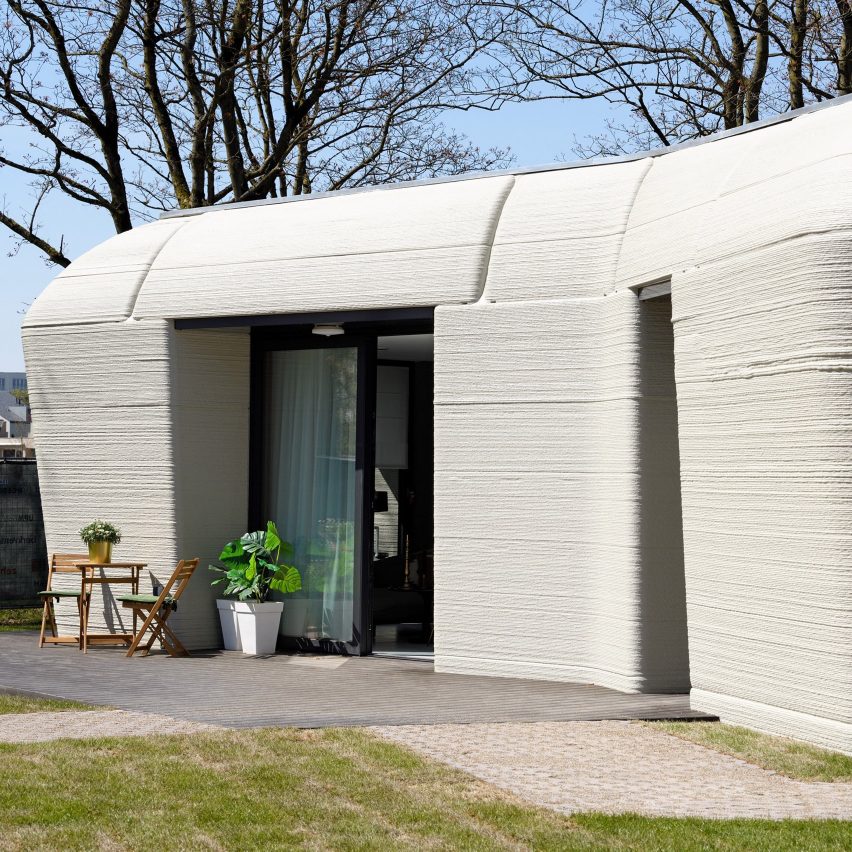 A boulder-shaped concrete house in the Netherlands has become the first lived-in 3D-printed home in the country after its tenants received the key on April 30.

Located in a suburb of Eindhoven, the single-storey home was built as part of a five-home 3D printing scheme named Project Milestone, and is said to be the first 3D-printed home in Europe where people actually live.

The project was first announced in 2018 with the intention of building the world’s first 3D-printed houses to use as rental properties. On April 30, Dutch couple Elize Lutz and Harrie Dekkers received the keys to their home in Project Milestone.

“I saw the drawing of this house and it was exactly like a fairytale garden,” Lutz explained to The Guardian. “It is beautiful.”

“It has the feel of a bunker – it feels safe,” said Dekkers.

Residential real estate investor Vesteda is the owner of the house, which it rents out to private tenants.

The home was designed by Dutch architects Houben & Van Mierlo and informed by the shape of a boulder.

It has curved, sloped exterior walls and was constructed through printing layers of stacked concrete to form 24 individual components.

These pieces were printed at a nearby printing site and transported to the plot to be assembled, fixed to a foundation and fitted with a roof, windows and doors.

The construction company developed the concrete mortar for the project and helped develop the printing technology.

Inside, the home’s stacked concrete walls were left exposed to reveal its layered texture. Floor-to-ceiling windows interrupt the concrete layers and are recessed within its thick walls.

The 94-square-metre home includes an open-plan kitchen-diner and living area that occupies over half of the floor plan, while a large double bedroom and bathroom are contained within the remainder of the home.

Project Milestone is a collaboration between the Eindhoven University of Technology and a number of construction specialists,  and was designed with the aim of learning from it to help broaden the production of 3D-printed homes.

The scheme will build five 3D-printed homes, with each home becoming more complex through the use of different printing techniques and the addition of multiple storeys.

As the project grows, it is anticipated that other homes in the scheme will be manufactured and printed entirely onsite further reducing costs.

“We’re now setting the tone for the future: the rapid realization of affordable homes with control over the shape of your own house,” said Eindhoven’s alderman for housing, Yasin Torunoglu.

While Mighty Buildings designed an entire neighbourhood of homes that use 3D-printed panels as its main construction feature.

Photography is by Bart van Overbeeke.