Bigert & Bergström has built a golden, egg-shaped sauna for the people of Kiruna after damage caused by decades of iron ore mining resulted in the relocation of the entire Swedish town. 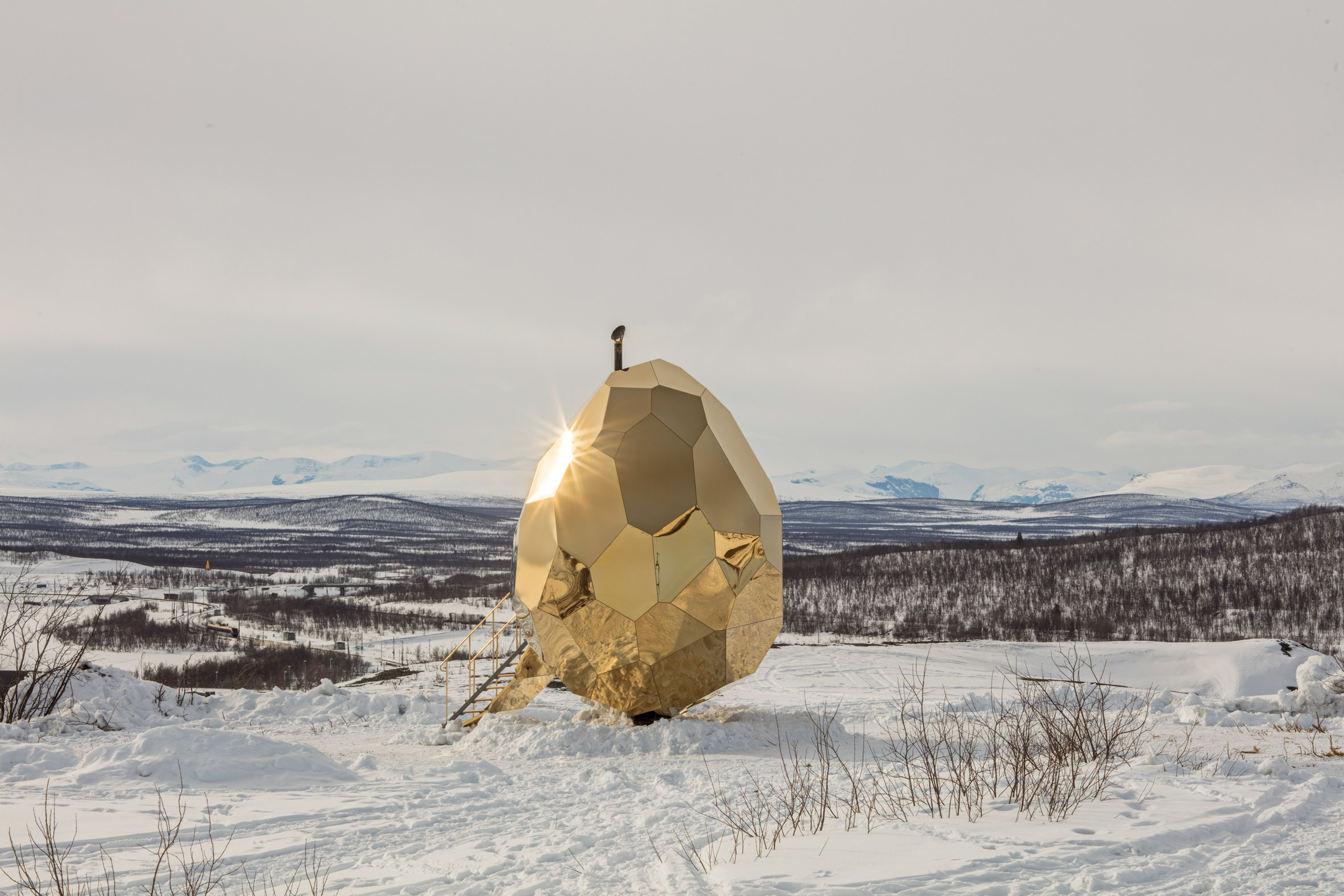 The Swedish artist duo was commissioned by developer Riksbyggen, to design a commemorative social sculpture for the town after residents voiced fears of losing community spirit after their relocation.

The whole town is being shifted several kilometres eastward into a masterplan developed by White Arkitetker, which will allow mining to continue for a further 20 years. 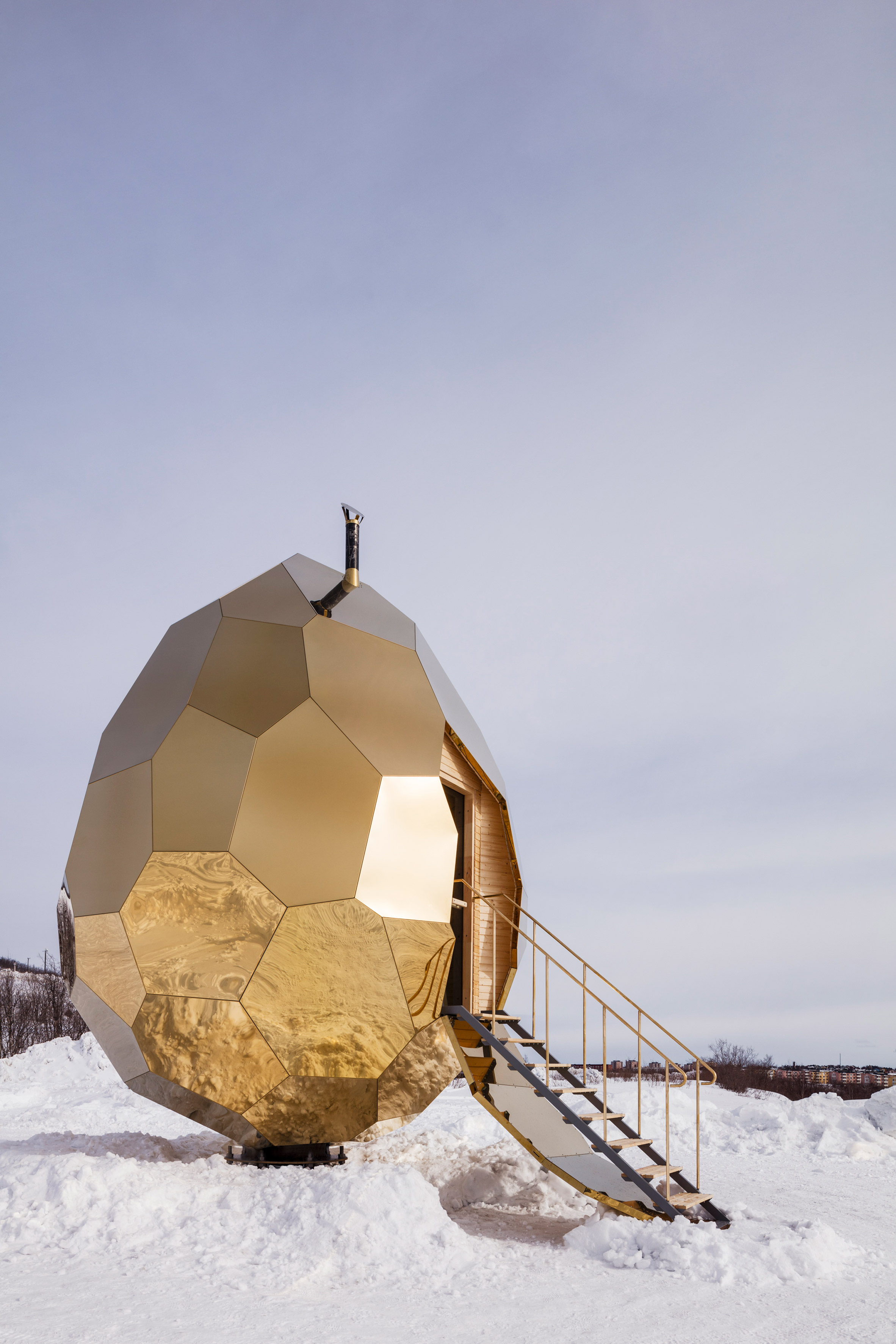 The artists’ response was to design a five-metre-high by four-metre-wide golden sauna as a meeting place for residents.

Solar Egg is comprised of 69 separate pieces of gold-plated stainless-steel sheets, which come together to form the multifaceted oval. 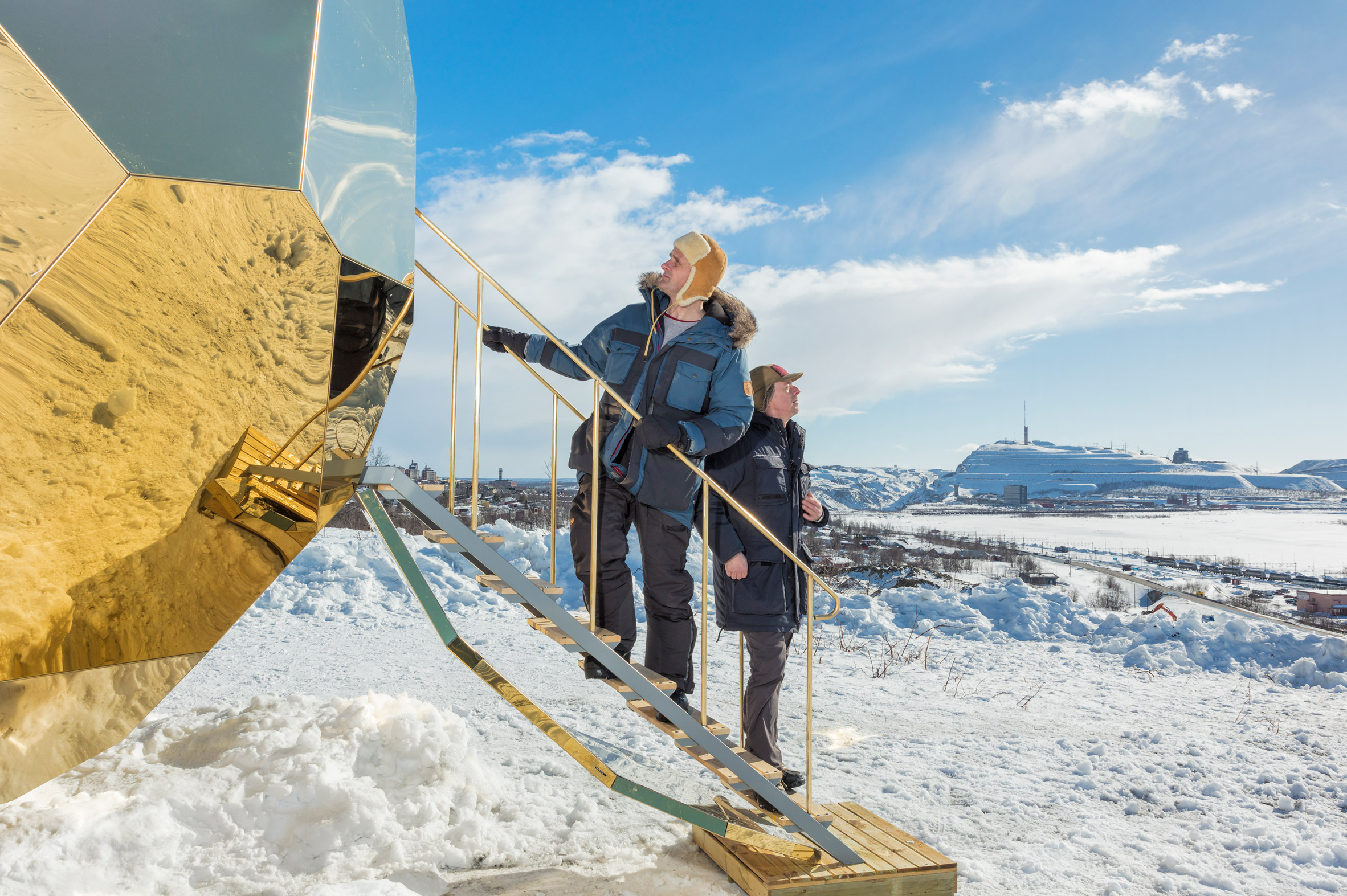 Located 145 kilometres north of the Arctic Circle in Swedish Lapland, the egg-shaped form is intended to make reference to the climate, with the snowy surroundings reflected in the golden mirrored surface.

“Landscape, mine, town, sky, sun and snow are here combined into a fragmented image that can evoke associations with the complexity spanned by today’s discussion about climate and sustainable community development,” said artist Mats Bigert. 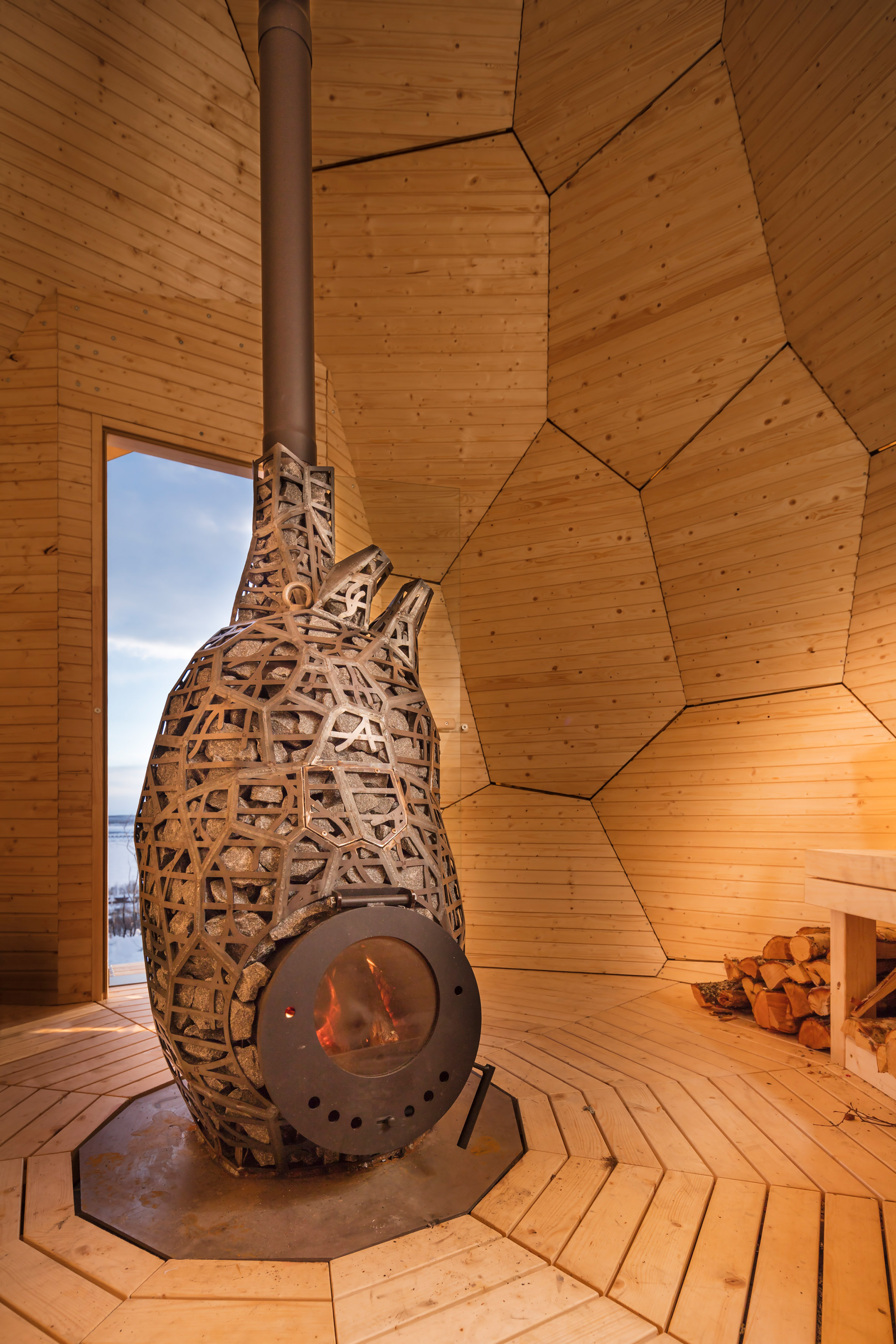 Inside, the pine-clad interior surrounds a handmade wood-fired burner, encased in a iron cage in the shape of an anatomical heart. The burner is filled with large stones to conduct the heat, which varies between 75 and 85 degrees Celsius.

A flight of drawbridge stairs that form the doorway can be lowered down to the snow for visitors to enter. Inside, benches made from aspen wood form the sauna’s tiered seating, with room for up to eight people. “When Riksbyggen asked us to interpret Kiruna, we felt it was natural to explore a space that unites and encourages conversation,” said Bigert. “Saunas are sacrosanct places where you can discuss all manner of things – from the big to the small.”

The “devastating transformation” of the landscape and effect on the environment caused by the mining has sparked a lot of debate among the residents. The relocation of Kiruna’s entire community is due to the mining company LKAB’s continued extraction of the iron seam that runs under the town.

“The iron ore is and has been – ever since it first began to be extracted at the end of the 19th century – an important source of income for Sweden, and absolutely vital for the town of Kiruna,” said Bigert. “No mine, no town.” 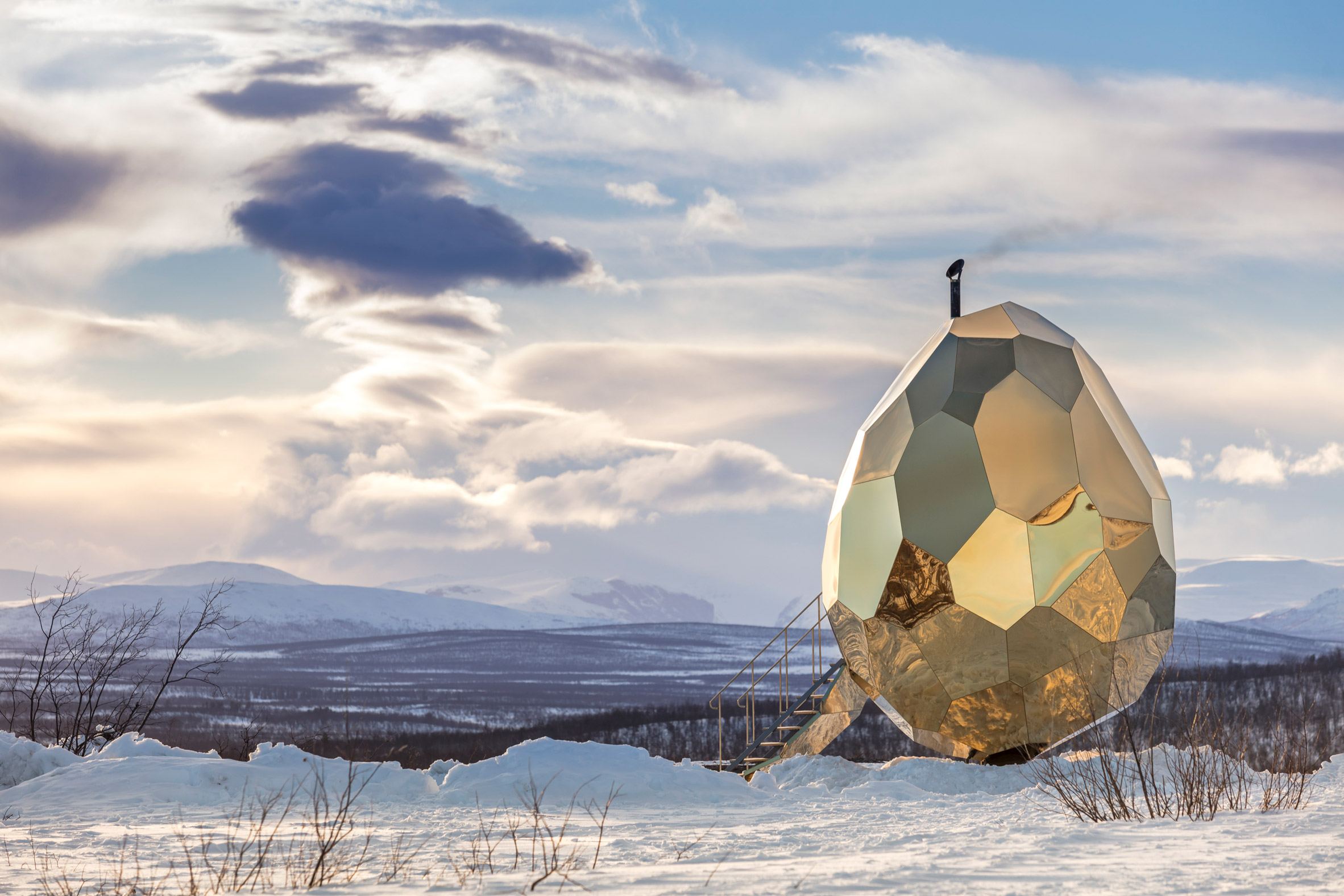 Kiruna’s relocation is being overseen by White Arkitetker, which has created a masterplan named Kiruna 4-Ever that details the phased strategy spanning the next 20 years. The plan was shown as part of the Venice Architecture Biennale in 2014.

Danish firm Henning Larsen Architects’ designed a city hall for the masterplan, a circular building with a crystal-shaped inner structure that is intended to resemble iron ore deposits.

Stockholm-based Bigert & Bergström has previously experimented by covering Sweden’s highest mountain, Kebnekaise, with an insulating coat to test whether geo-engineering could help slow glacial melting, and their climate chamber designed for the World Expo in Lisbon in 1998.

Photography is by Jean-Baptiste Béranger.