A “micro-farming wall” and a roof covered in photovoltaics are among the features incorporated into a prefabricated micro dwelling created by US studio Gray Organschi Architecture, in collaboration with researchers at Yale University.

The Ecological Living Module, or EDM, was conceived by Gray Organschi Architecture and Yale’s Center for Ecosystems in Architecture – both based in New Haven, Connecticut. Commissioned by the UN Environment and UN Habitat programmes, the prototype dwelling is meant to address housing issues from both a social and environmental standpoint. 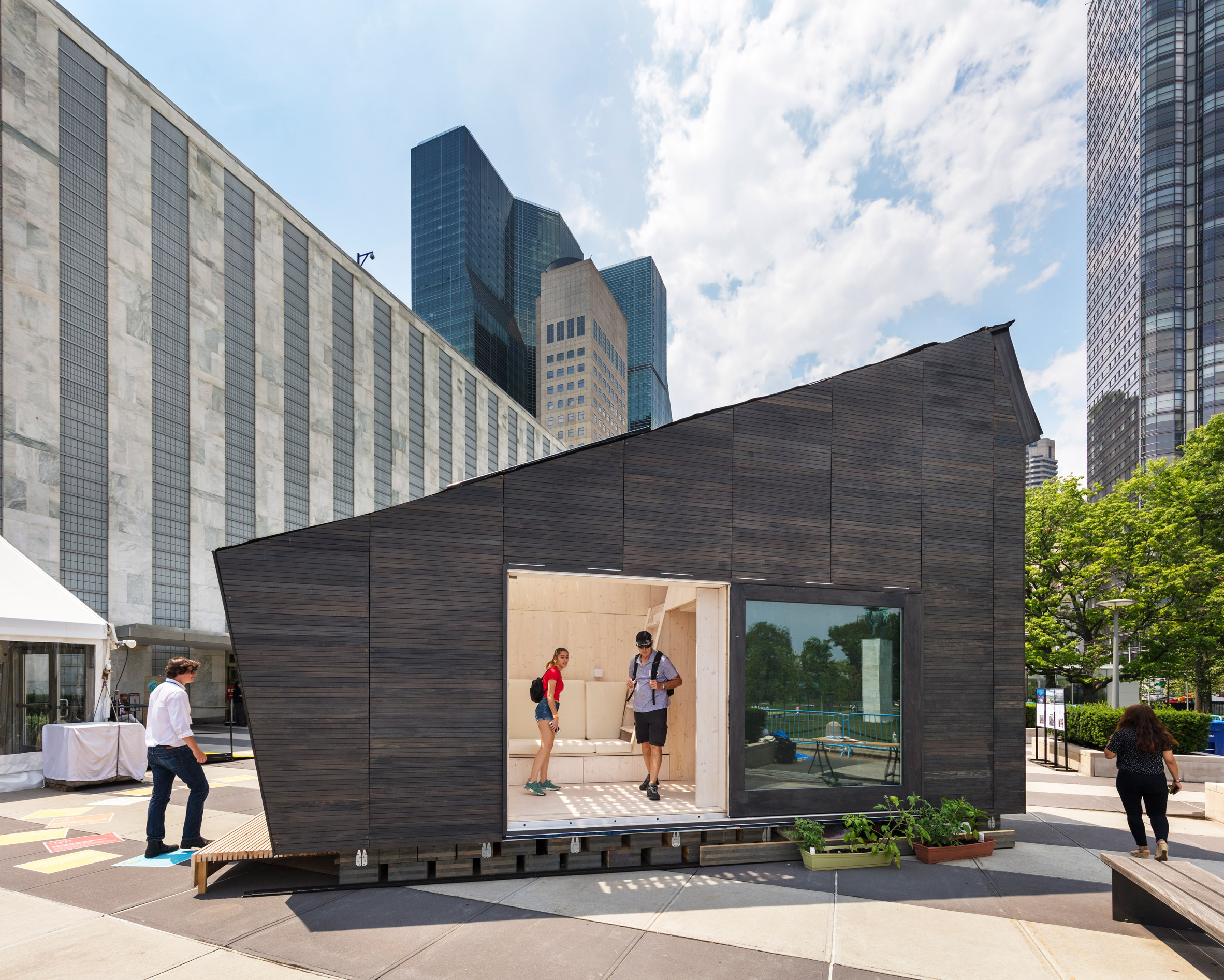 “Today, one billion people live in informal settlements, often without reliable electricity, water, sanitation or food,” the team said. “Meanwhile, the housing sector consumes 40 per cent of the planet’s total resources and contributes more than a third of global greenhouse gas emissions.”

Totalling 230 square feet (21 square metres), the wedge-shaped dwelling has an efficient design that makes use of sustainable materials and simple construction technologies. It also generates all of its own electricity. 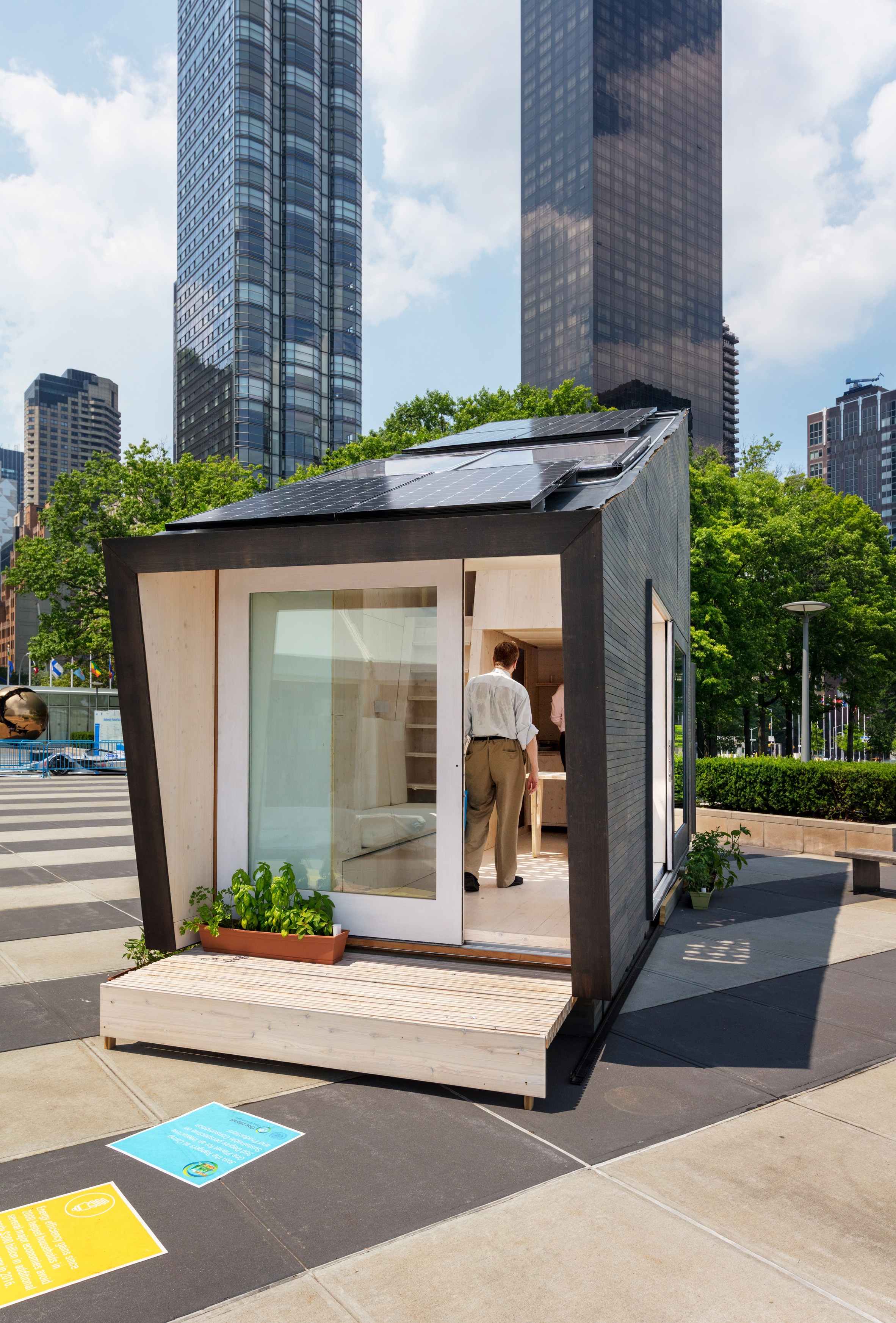 While rectangular in plan, the dwelling has a sculptural form due to its sharply slanted roof. Engineered wood was used to construct the cabin, with posts made of parallel strand lumber (PSL) and beams formed from laminated veneer lumber (LVL).

Wall and roof panels are composed of cross-laminated timber (CLT) with wood-fibre insulation and plywood sheathing. CLT was also used for structural decking, while facades are wrapped in western red cedar. 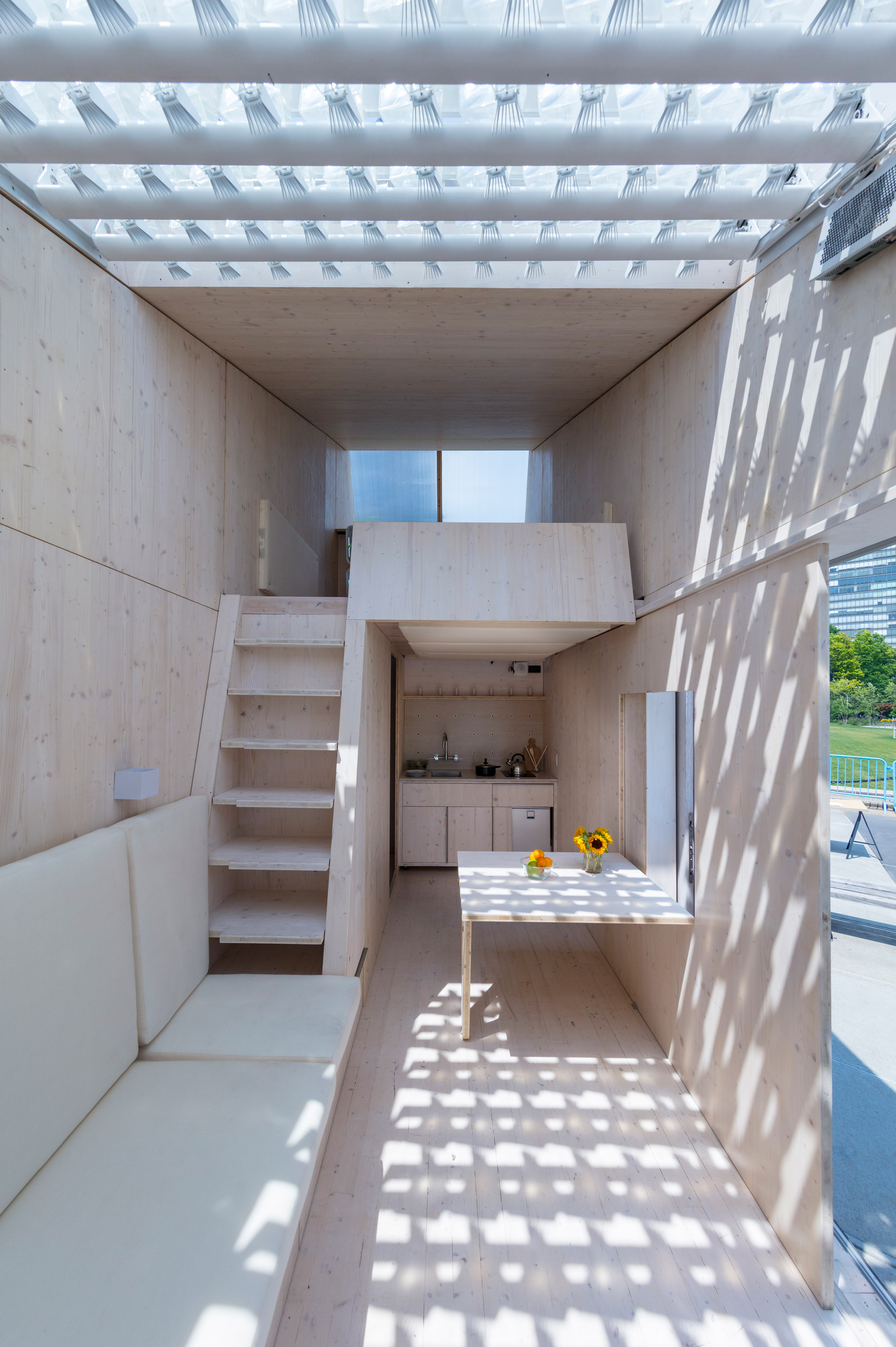 Designed to accommodate up to four people, the dwelling contains a sleeping loft, seating area, kitchen, and a bathroom with a shower and composting. The ceiling rises 16 feet (4.9 metres) at its highest point and helps pull hot air upward and out through vents.

All of the building’s electricity is generated by a combination of conventional photovoltaic panels and an “Integrated Concentrated Solar Facade System” that was developed by the global research collaborative HeliOptix. 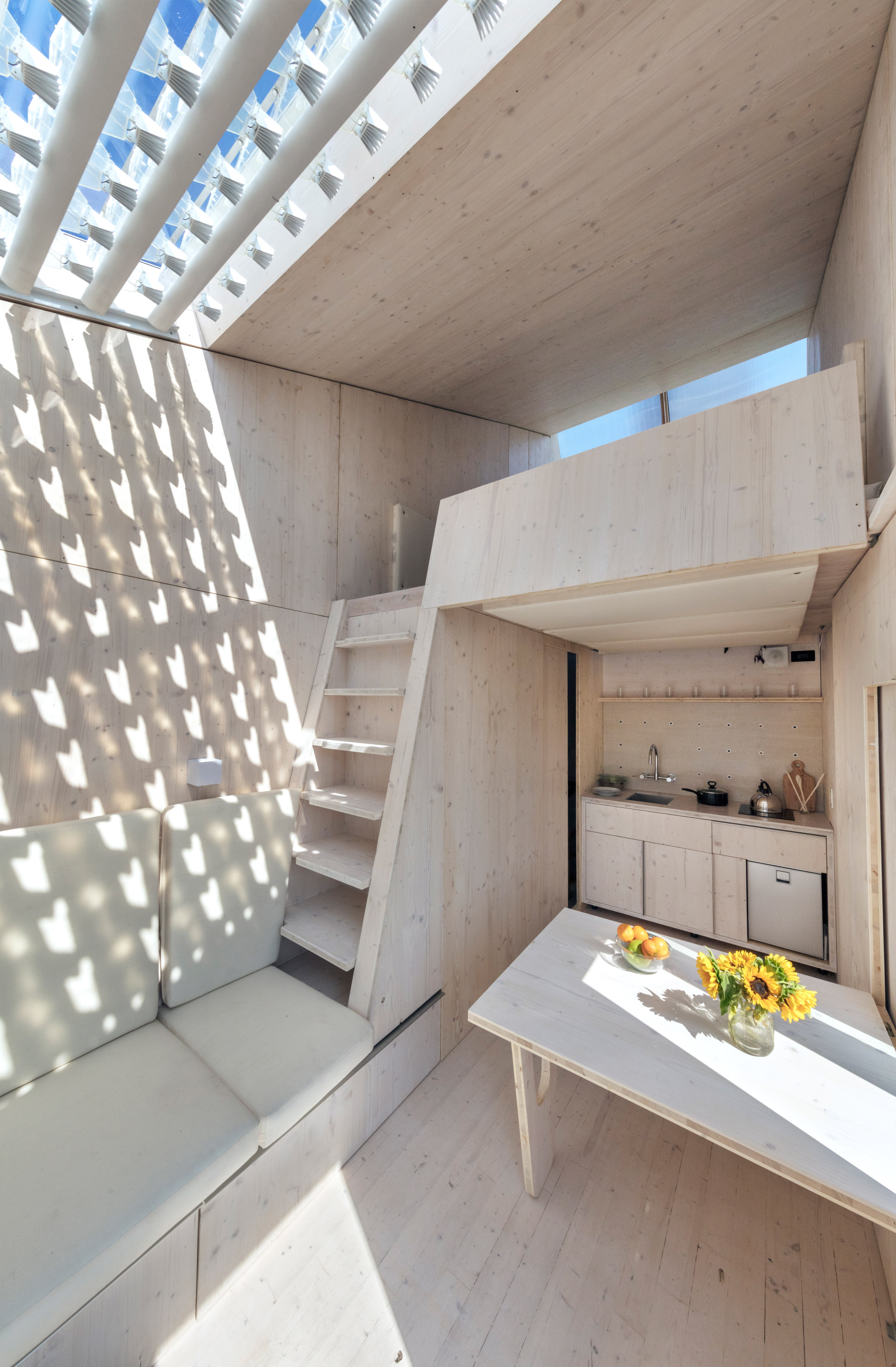 “The HeliOptix system produces greater power output per area than traditional solar, while using less than one per cent of the semiconductor material and transmitting diffuse daylight into the interior,” the team described.

The building also collects, stores and filters rainwater. During humid months, a dehumidifier system captures moisture from the air and supplements the rainwater supply. 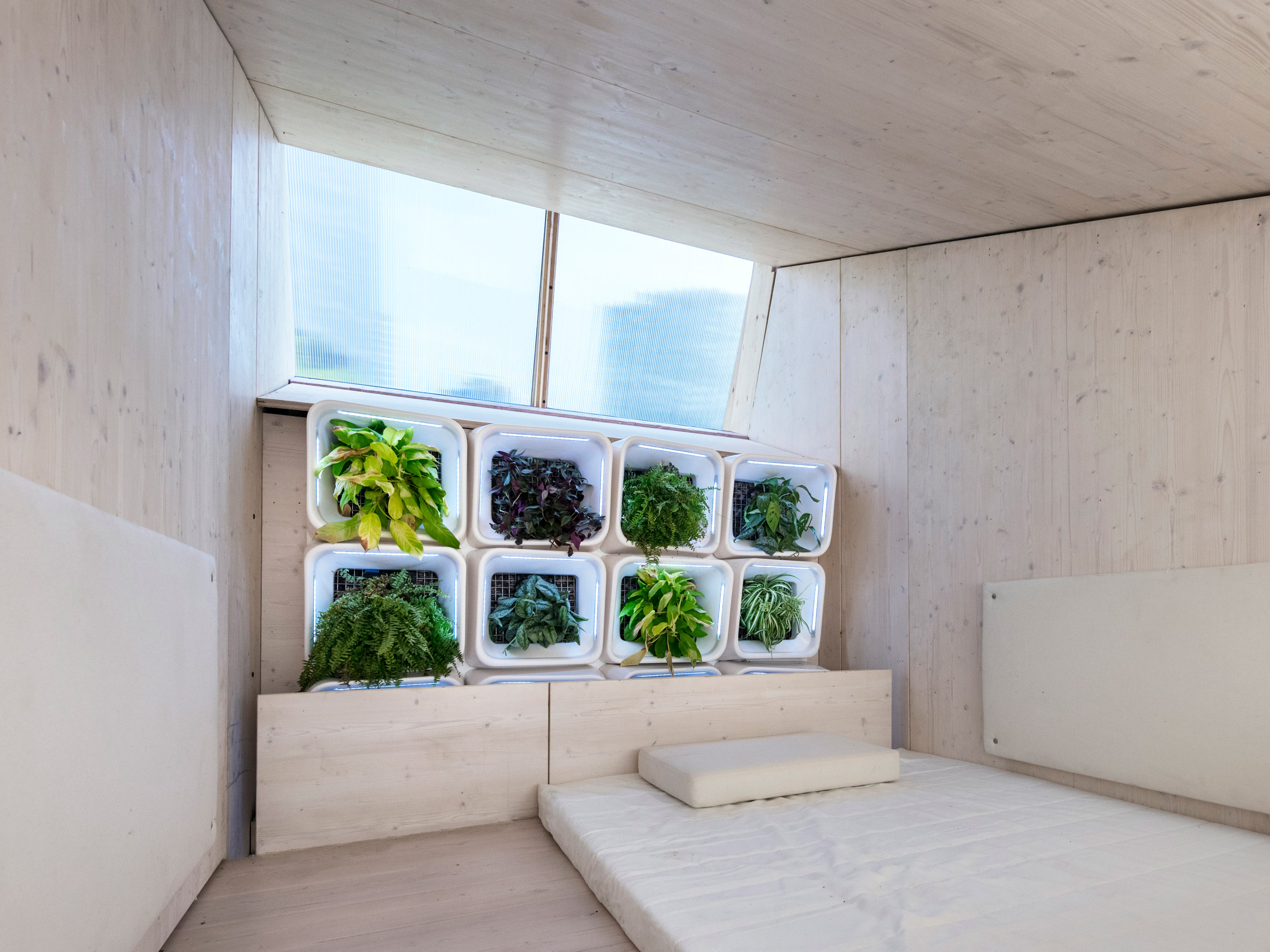 “Meanwhile, greywater is recycled to irrigate food crops integrated into the micro-farming wall,” the team added.

The dwelling was on view this summer at the United Nations Headquarters in Manhattan, in conjunction with a sustainability forum. 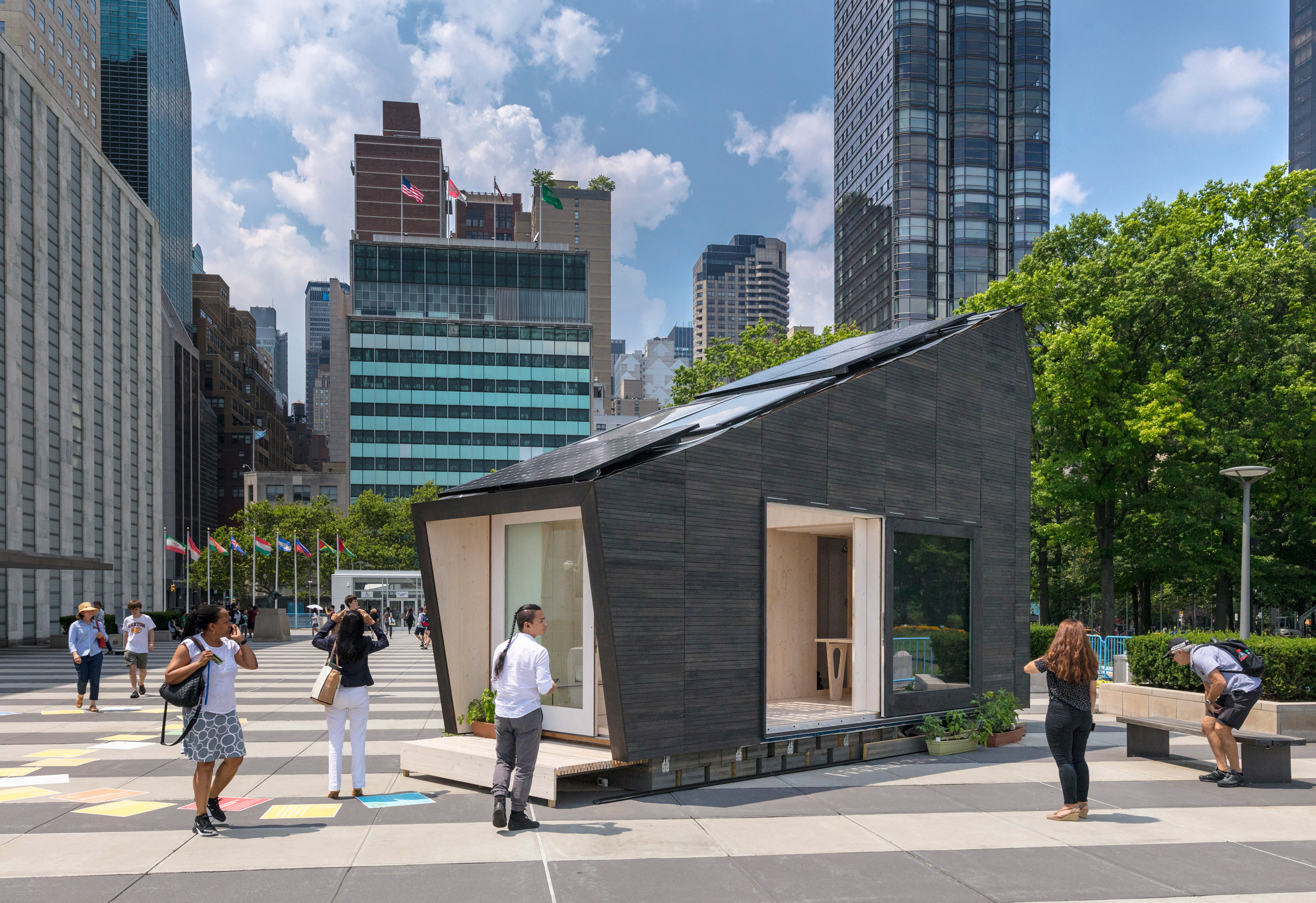 The building components were prefabricated offsite over the course of four weeks and then transported to the UN by truck. The building was assembled in three days by a 16-member team.

“If put into large-scale industrial production, the ELM could be prefabricated at under $50,000 per unit,” the team said.

The Center for Ecosystems in Architecture is a joint initiative between Yale’s School of Architecture and School of Forestry & Environmental Studies. 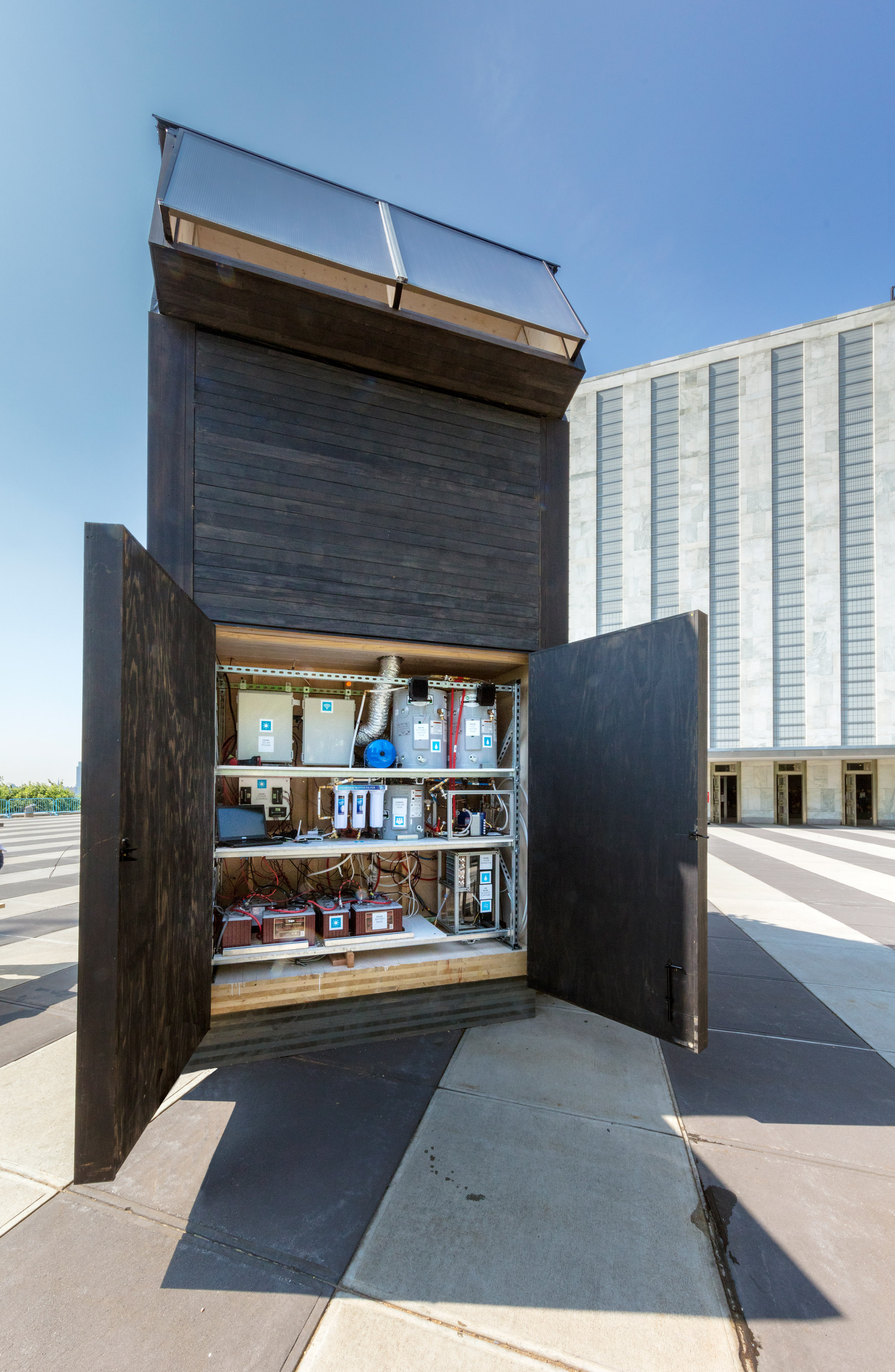 Micro dwellings are increasingly seen as a viable option for addressing the global housing crisis. Other tiny homes include a 35-square-metre dwelling by Grimshaw made of laminated timber, and a modular accessory dwelling by Yves Behar featuring glazed walls and folding screens.

MINI Living has also embarked on an initiative to explore how architecture can be used to make the most of unused spaces in cities — a programme that has resulted in iterations of small “urban cabins” in London, Los Angeles, New York and Beijing.

Photography is by David Sundberg/Esto.