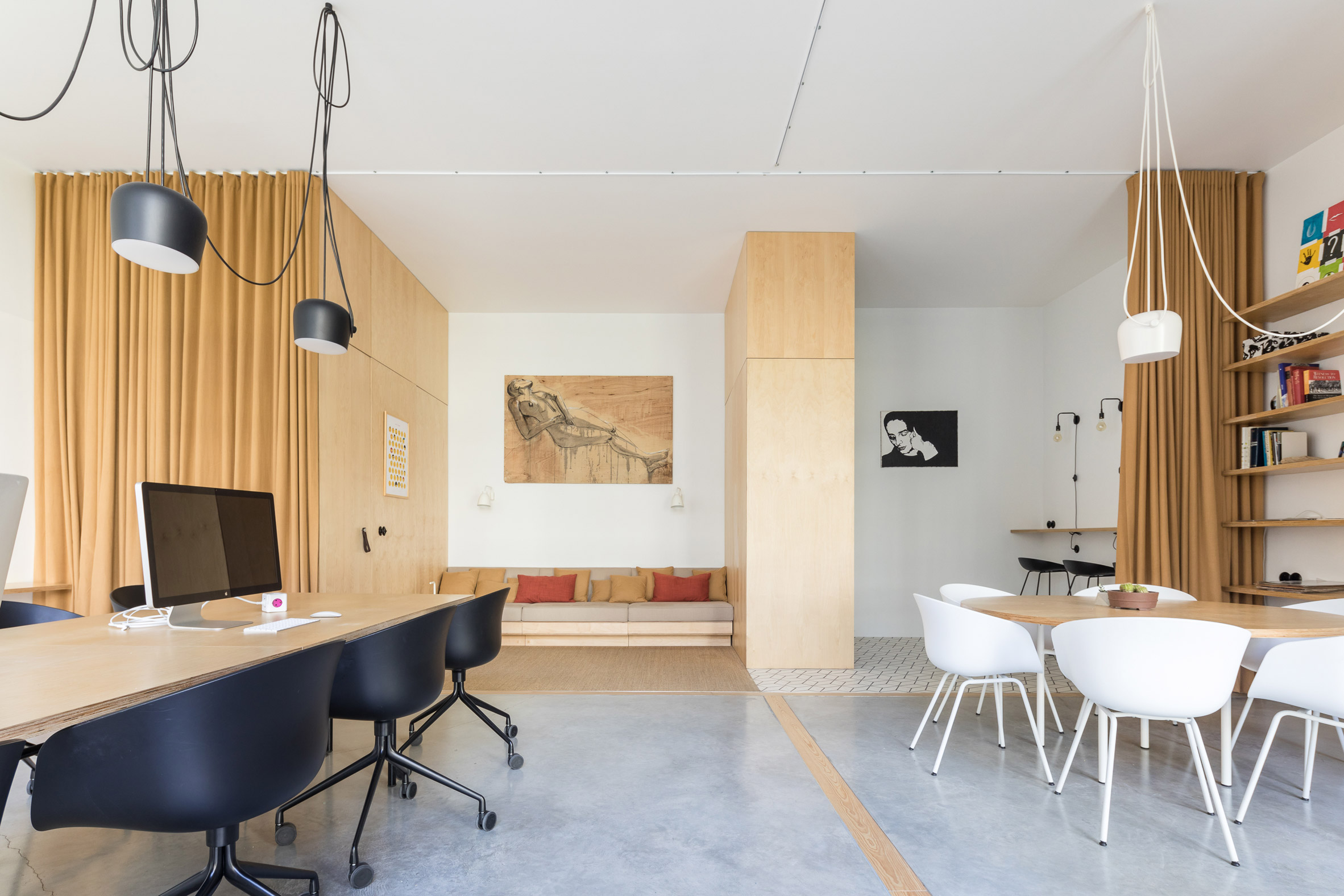 The Lisbon-based trio designed the space for Pure. The tech startup describes itself as “the hook-up app for awesome people”. 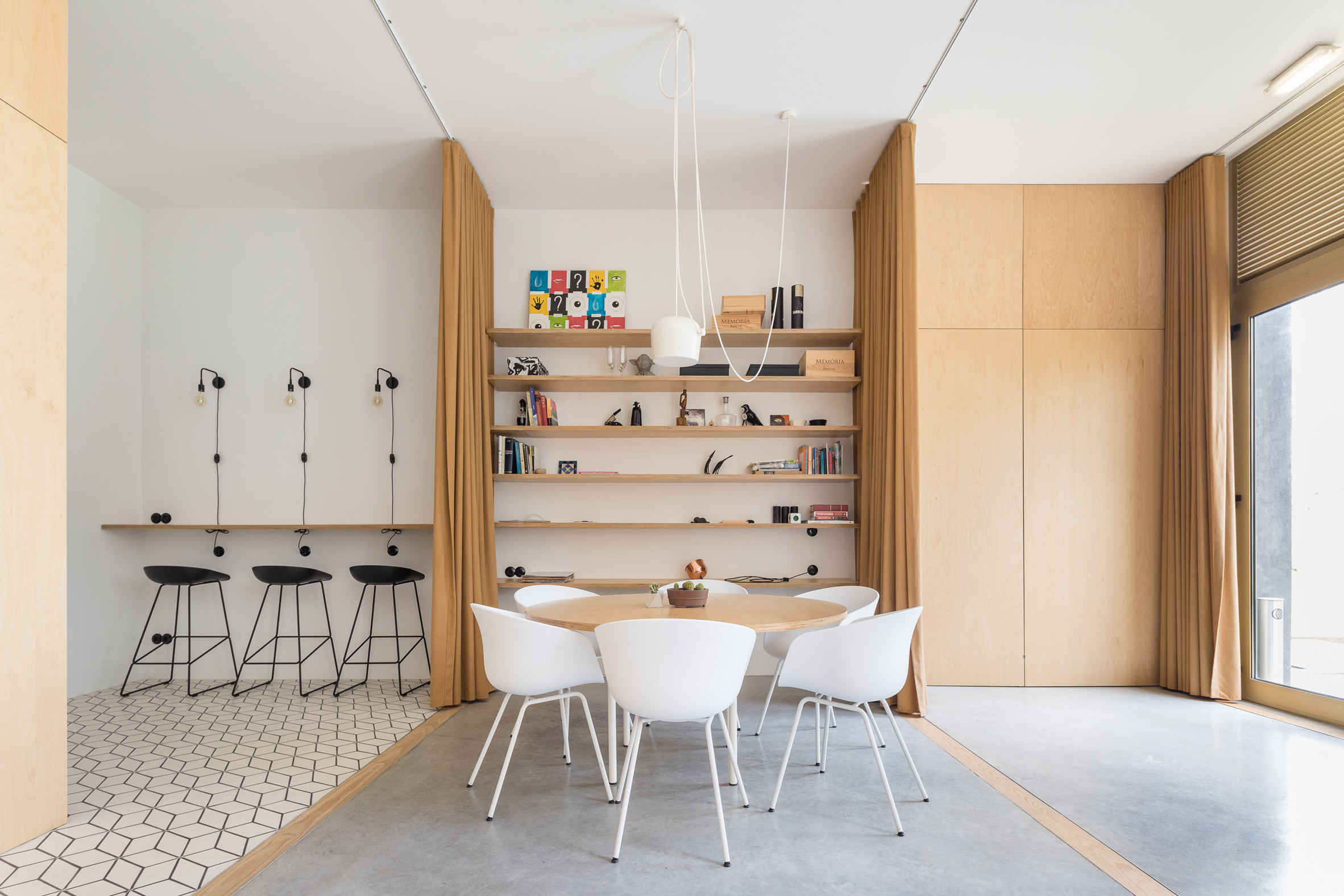 The team used the curtains to create a cosy atmosphere. The fabric also allows the company to partition different zones, including a workspace with a long table, a smaller meeting room with a circular desk for Skype calls, the lounge and a kitchenette. 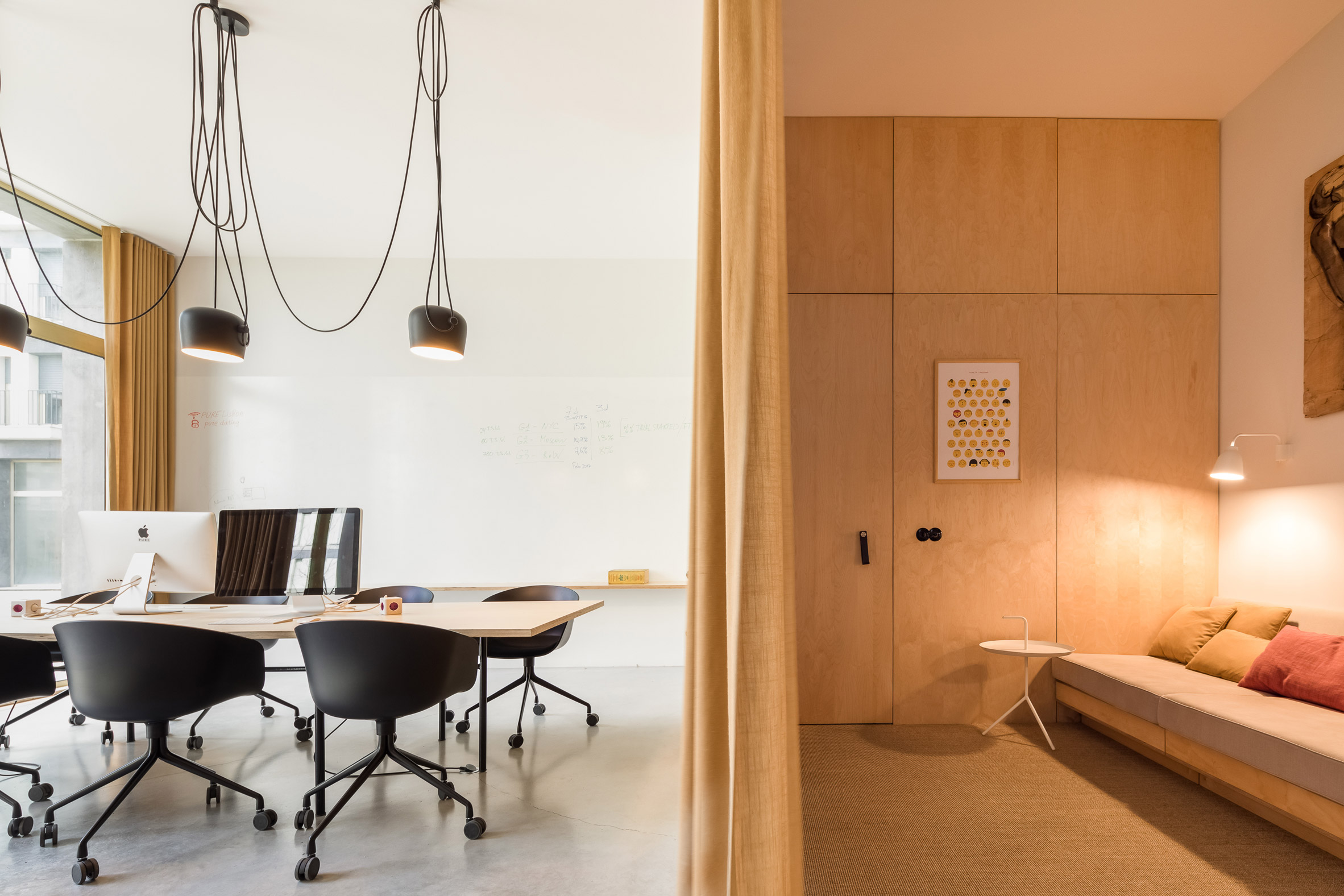 It offers plenty of flexibility, as the curtains can be drawn to separate the spaces, pulled back to create on open-plan space, or closed into ruched bundles that only partially separate each area. 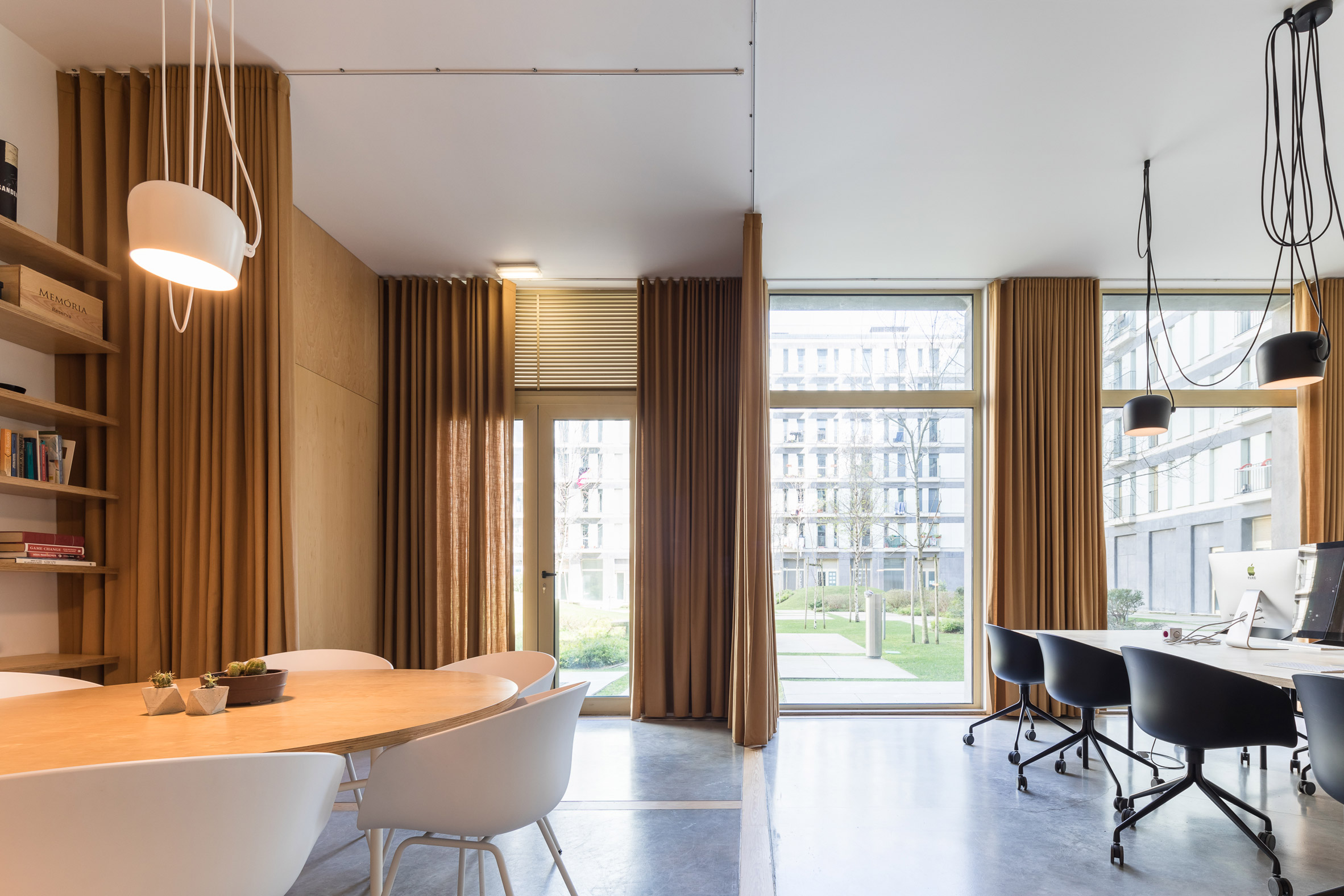 “A home feeling, creative, flexible and versatile space, was the starting point presented by the client for the genesis of this office,” said the architects.

“The introduction of the curtains allows the functional organisation, defining different environments.”

The zones of the office are also marked by wooden lines in the concrete flooring. 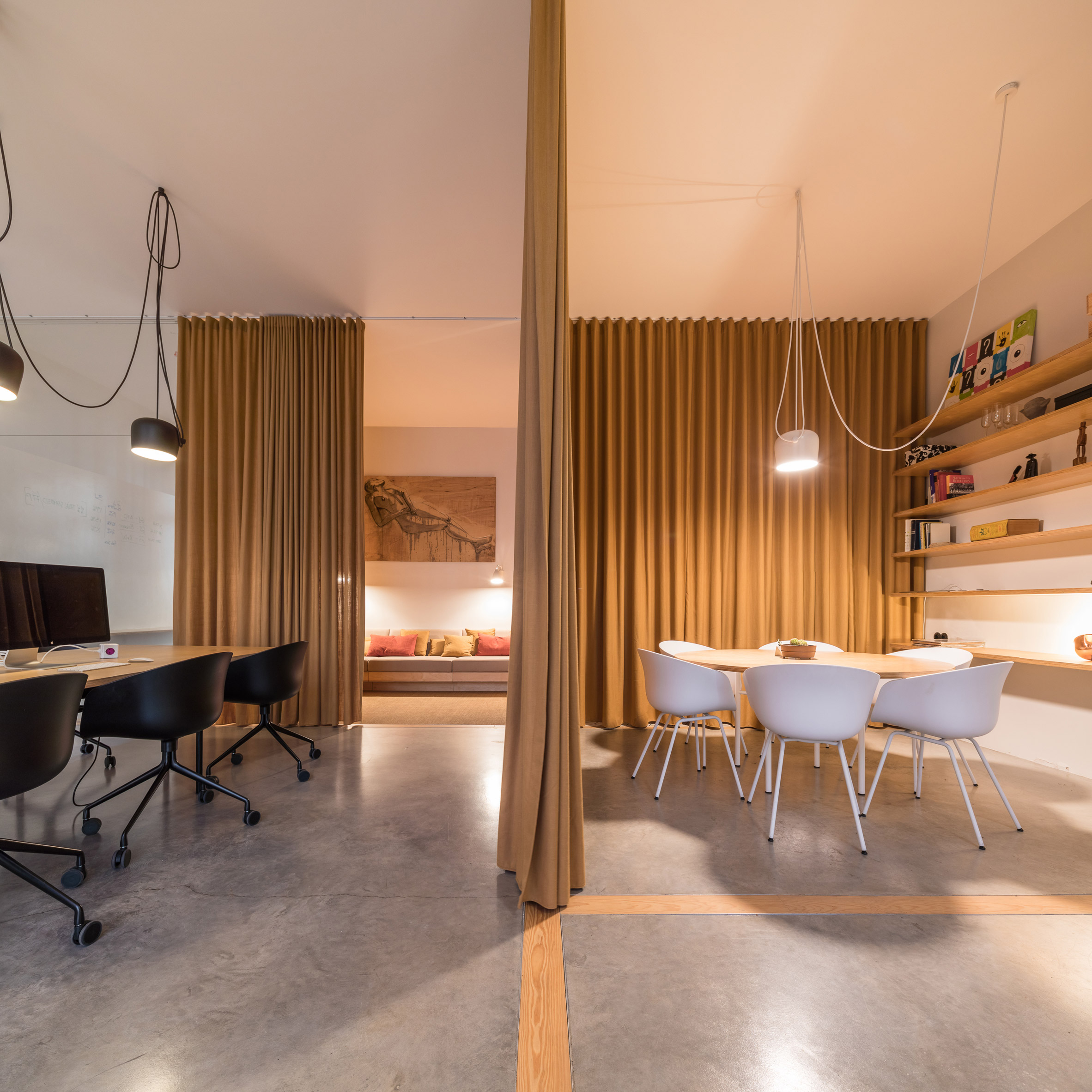 Measuring 60 square metres, the space is located on the ground floor of mixed-use building called Entrecampos on Avenida das Forcas Armadas, which was completed by Promontório Arquitectos in 2011.

A glazed wall brings in plenty of light and offers views to the internal courtyard. 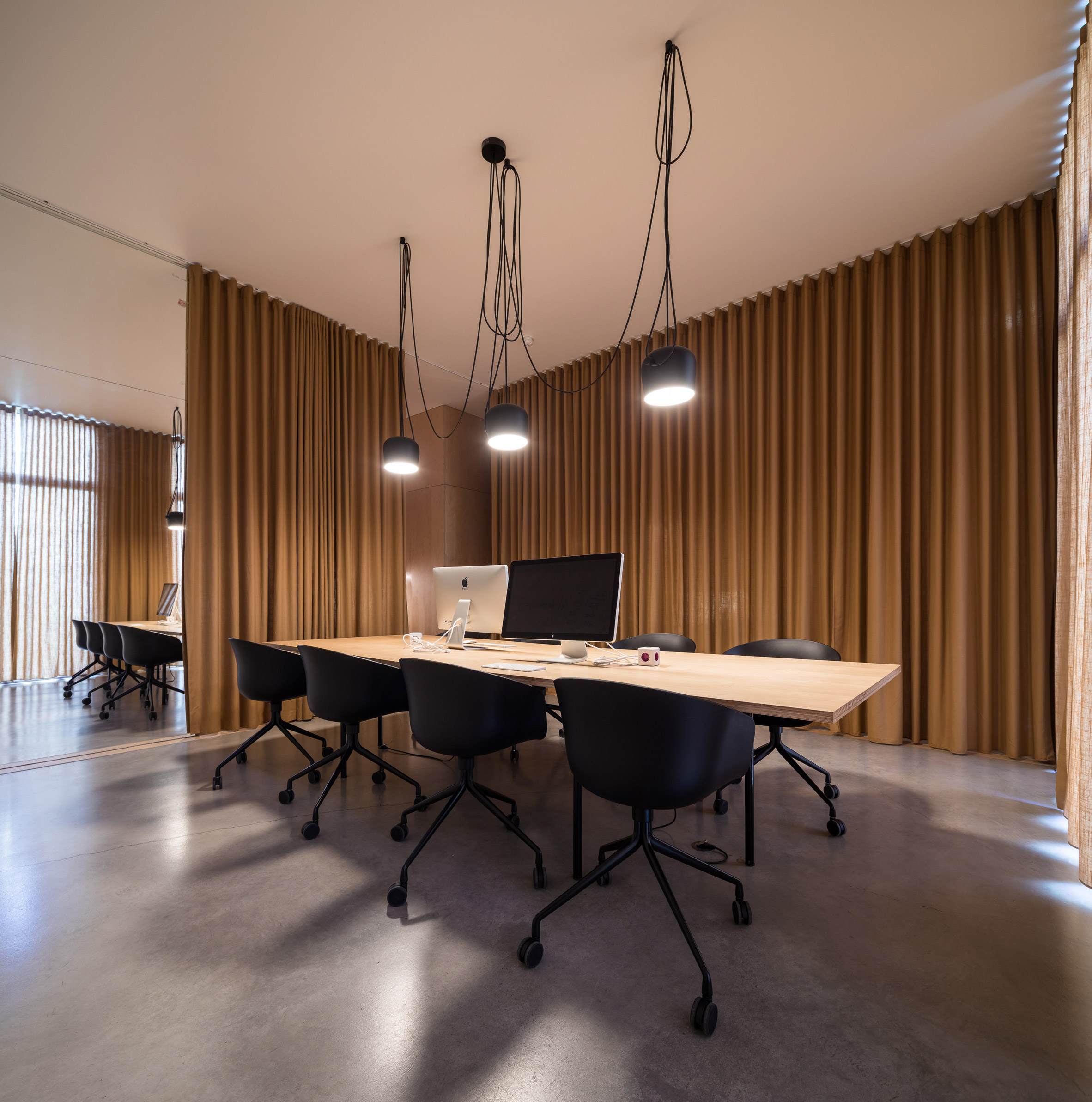 Rocio, Póvoa and Esse Studio chose the colour of the drapes, which they describe as “gold”, to reference the hue of the building’s window frames.

These golden tones are used throughout the space, and are contrasted with black and white details intended to reference Pure’s monochrome logo. 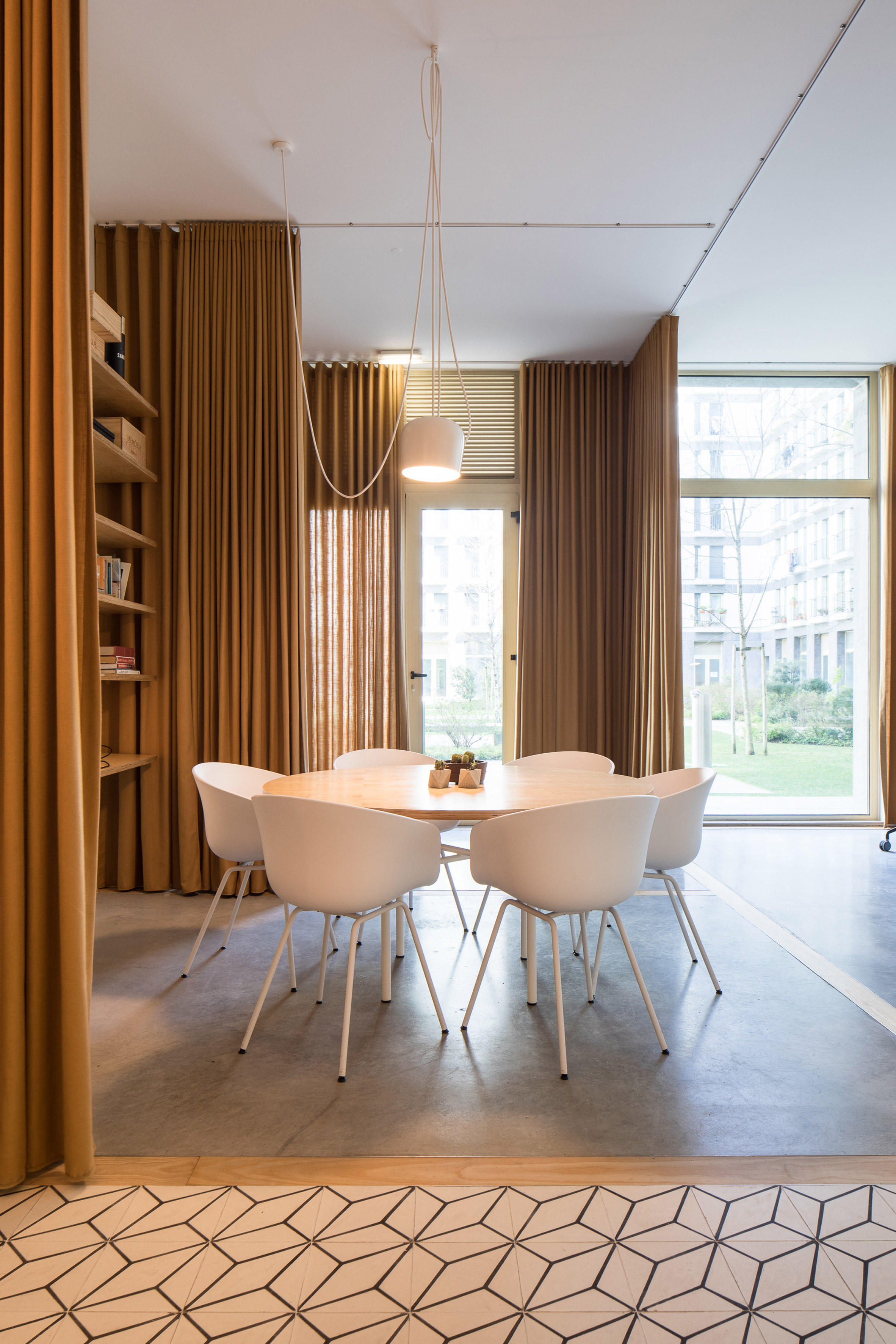 “Colours, materials and selected lighting and furniture, seek compliance with the concept of ‘home’ and with the graphic image of the company Pure, creating a cohesive space, of strong and unique language,” the team said. 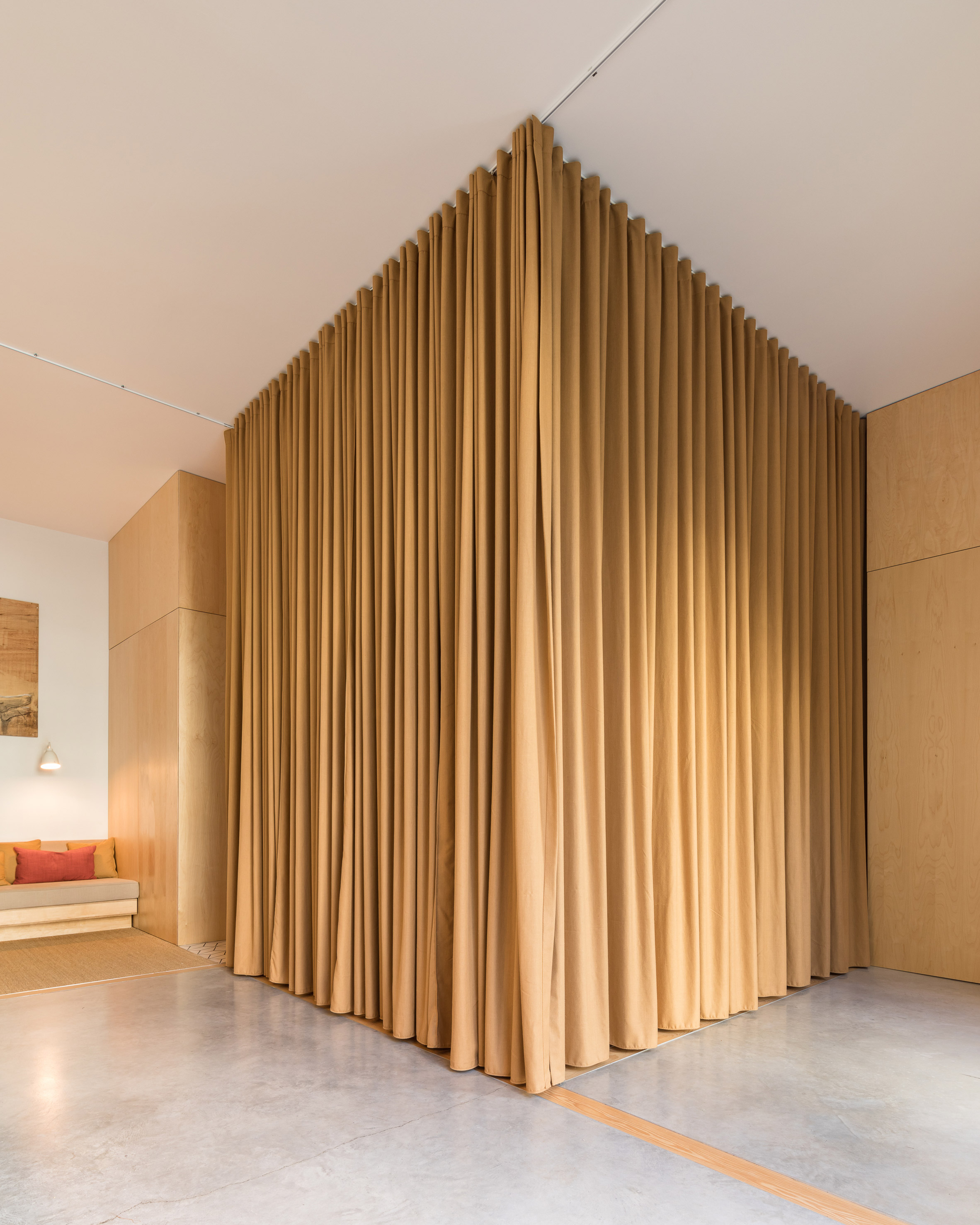 The European offices of Slack, the company known for its inter-office messaging app, features a similarly muted palette, which eschews the bright colours commonly associated with tech start-up offices.

Birch plywood forms furniture, including shelving in the office space, wall panels covering the front of the bathroom and the base of a sofa in the carpeted lounge. 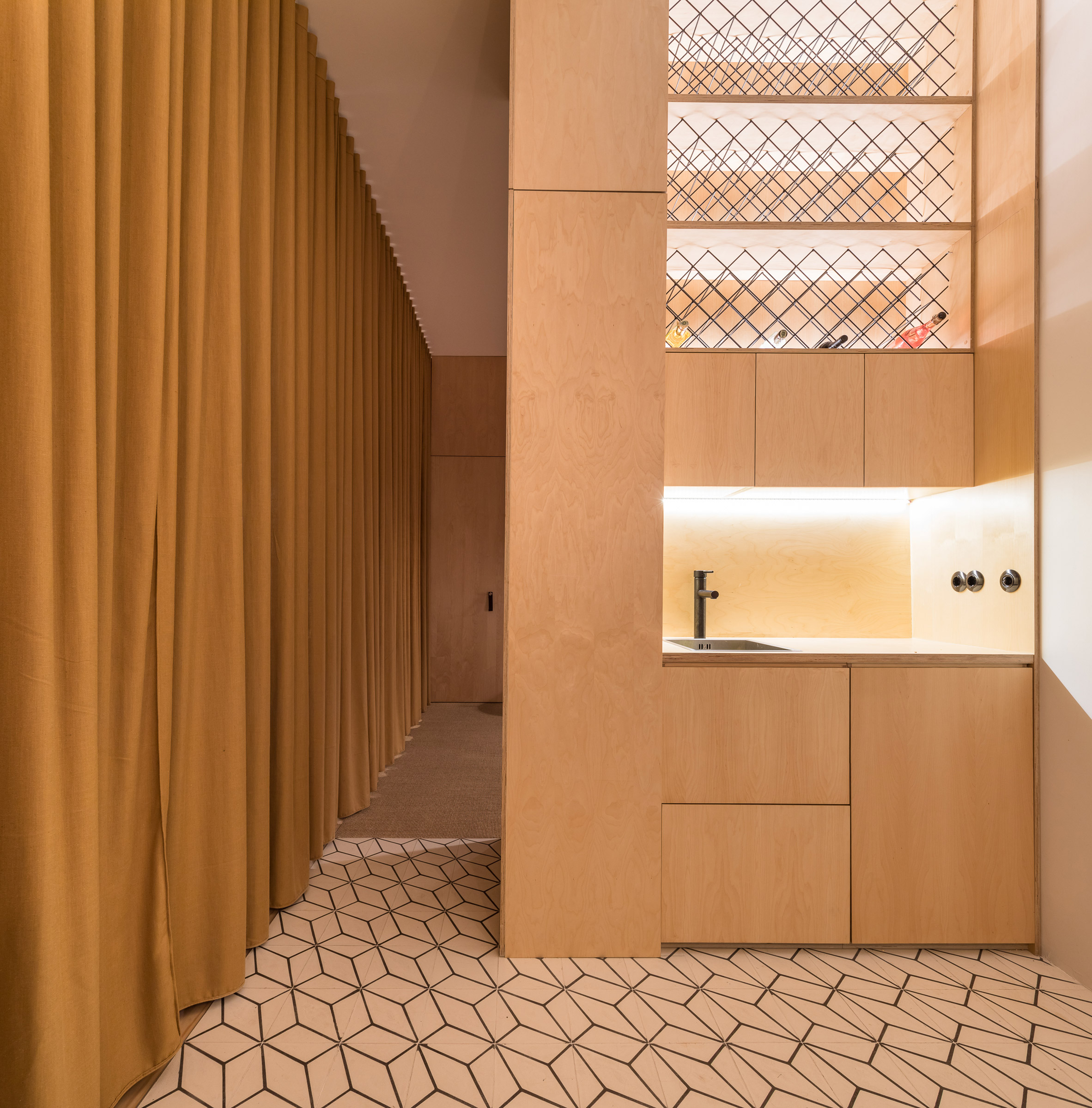 At the back of the space, the kitchen features a tall wooden cabinet that hides a structural beam. There is also a high wooden dining counter with three black stools.

White floor tiles patterned with geometric black lines feature in both the kitchen and the bathroom. 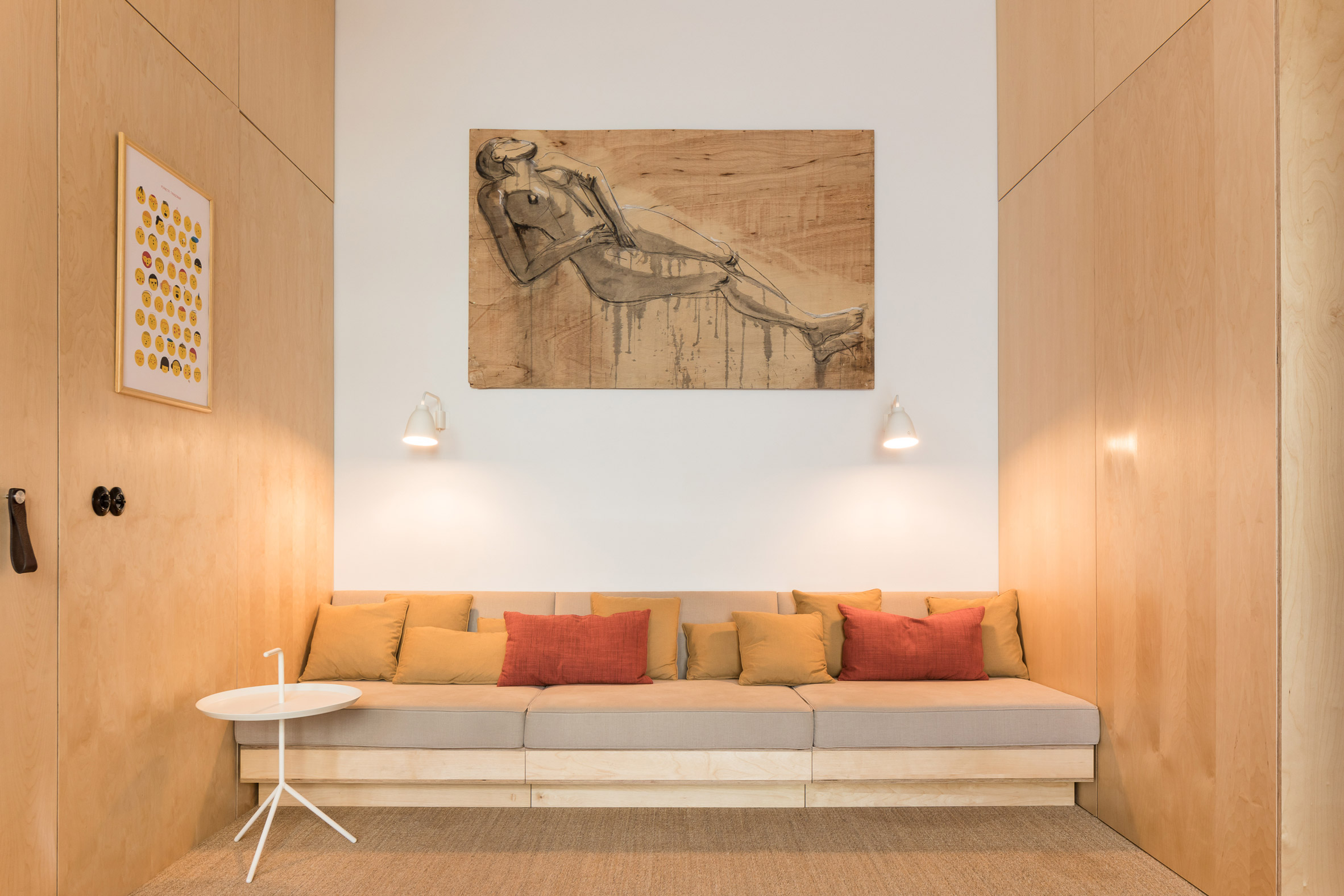 Other monochrome details include the Aim pendant lights by the Bouroullec brothers, with large amounts of dangling wires, placed above the two desks and the chairs.

The wall opposite the big window is also covered with mirrors to make the space feel larger and to reflect the garden. 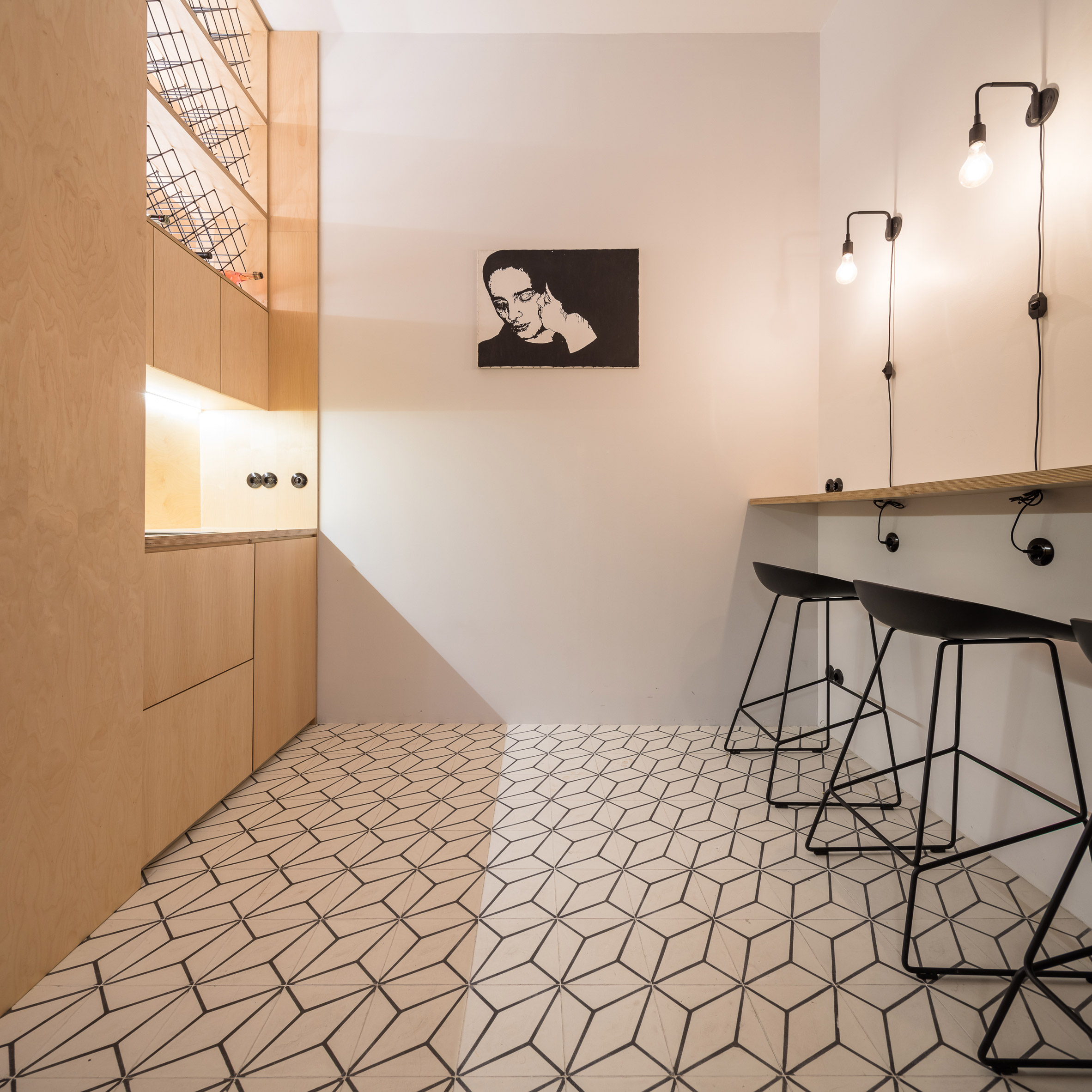 Architect Tom Chung also used curtains to make a flexible workspace in Toronto, while other adaptable offices include a space in Barcelona by Nook Architects with pods made of yellow chipboard and glass. 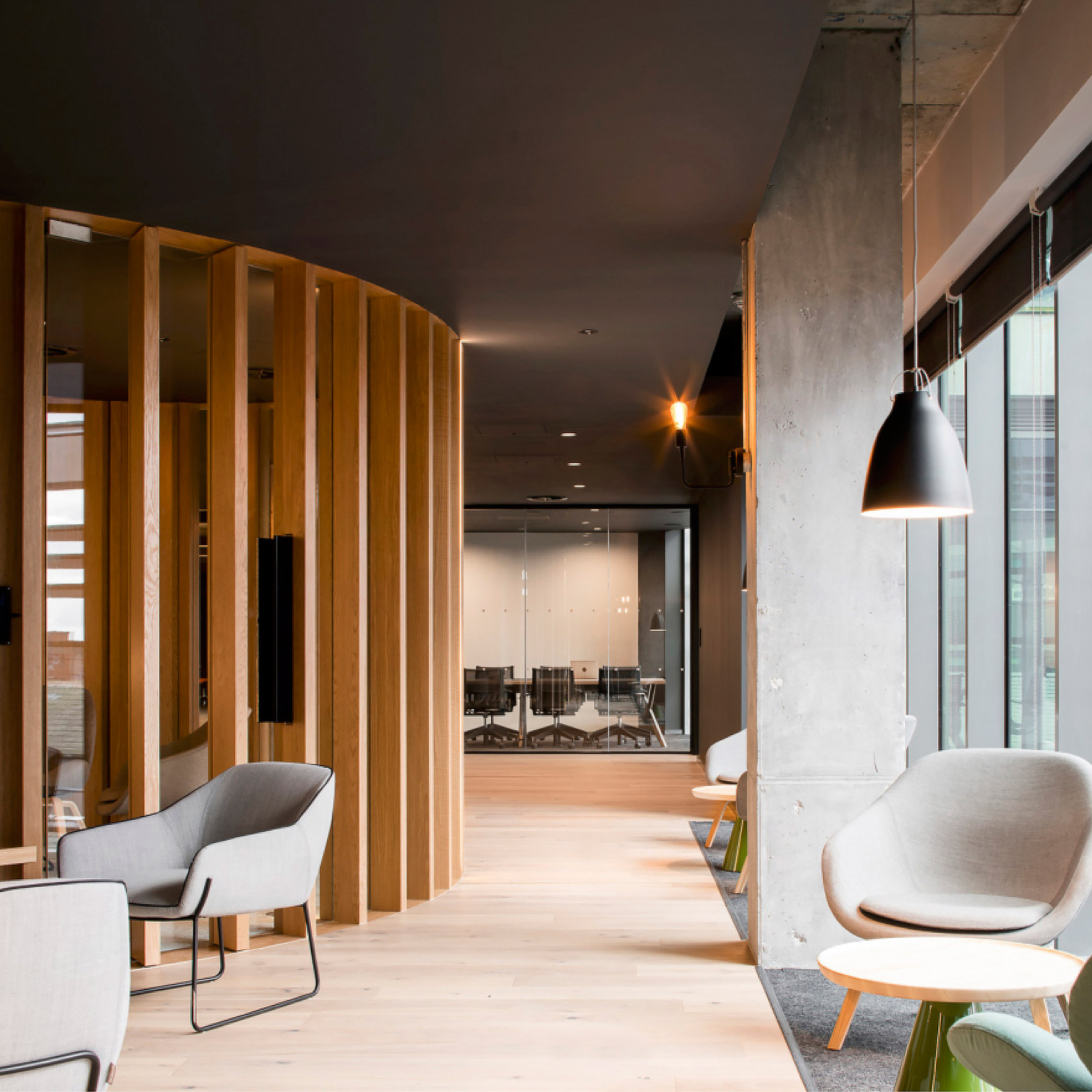 Photography is by Francisco Nogueira.

The post Curtains separate spaces in Lisbon offices for a “hook-up app for awesome people” appeared first on Dezeen.