Danish architecture firm COBE has completed the wedge-shaped Tingbjerg Library and Culture House for a school in Copenhagen that narrows to a width of just 1.5 metres at either end.

The library and cultural facility was designed by COBE as an extension to an existing school in a northern suburb of the Danish capital. 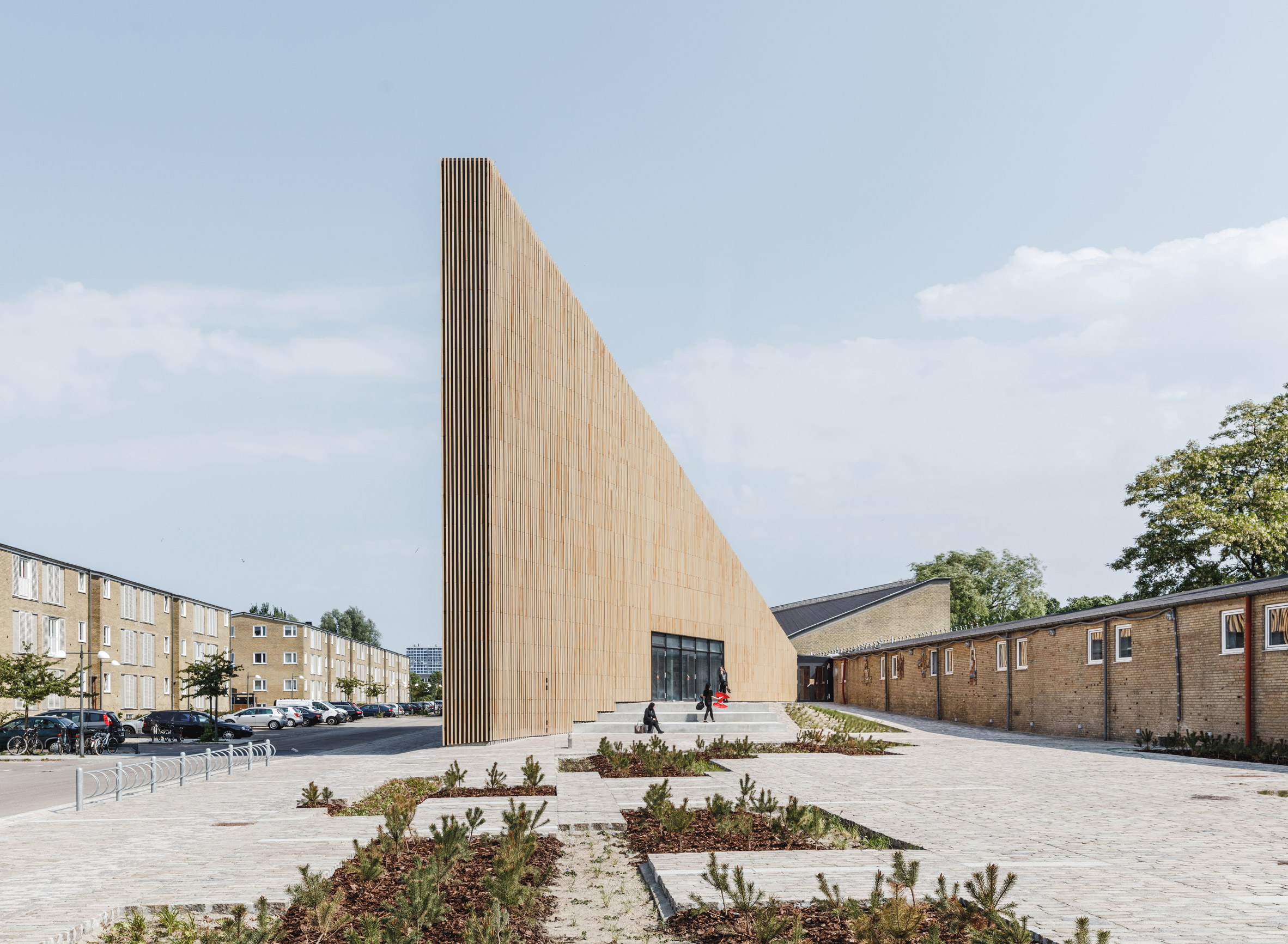 Architect Steen Eiler Rasmussen designed the neighbourhood where the school is located in 1950s. The area’s modernist architecture is widely respected, but its residents currently suffer social deprivation and high crime rates.

Tingbjerg Library and Culture House is intended as a new social and cultural destination that will help to revitalise the area by promoting community integration and engagement. 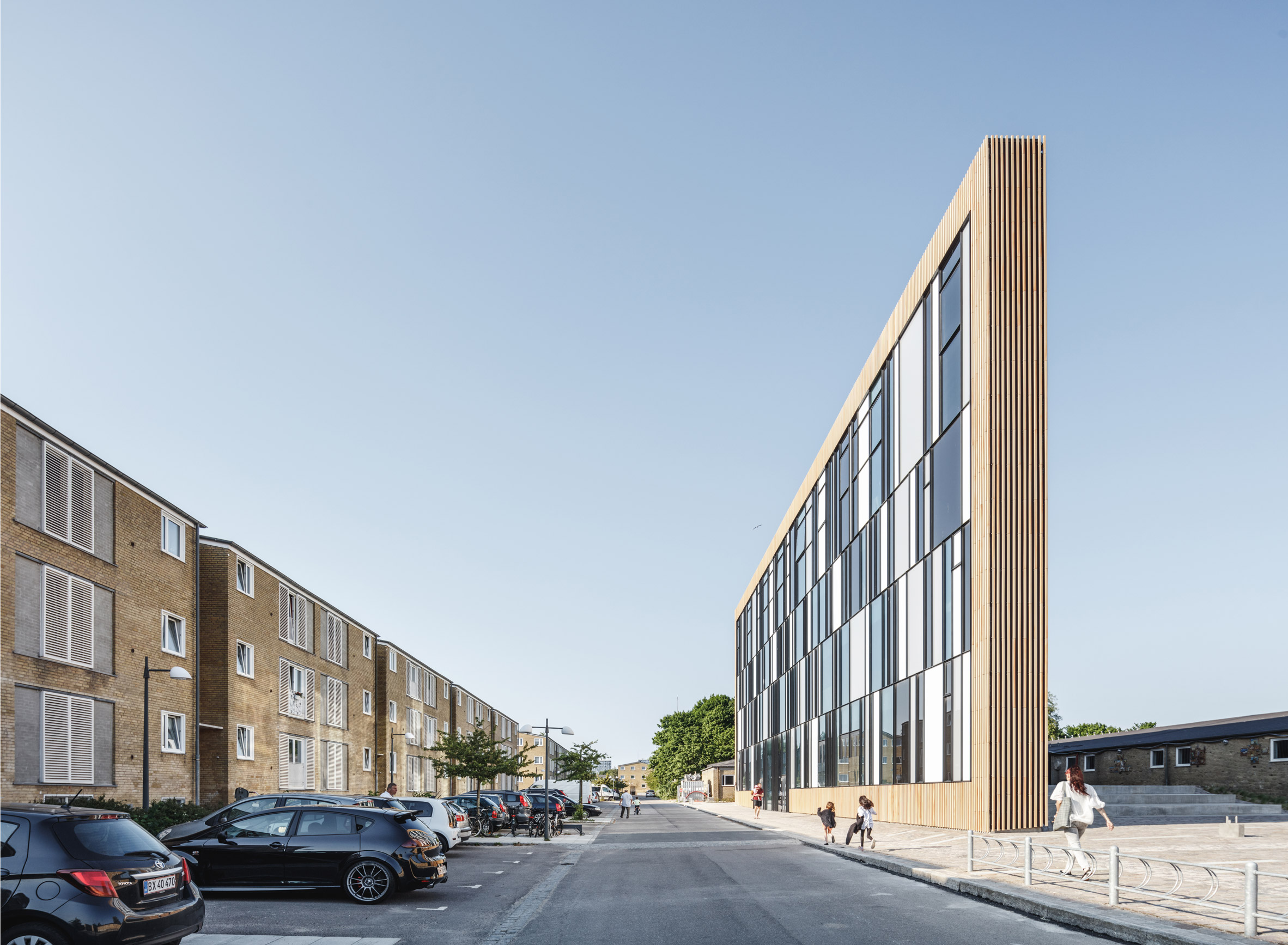 The building is positioned and oriented to enhance its connection with the school’s existing infrastructure, with its wedge-shaped form sloping down toward the school’s entrance.

A flat, glazed facade fills the wide face of the wedge, allowing the activities taking place within to be seen from the street outside. The stacked grid of transparent and opaque sections is informed by traditional typeset cases, which allowed their contents to be read in layers. 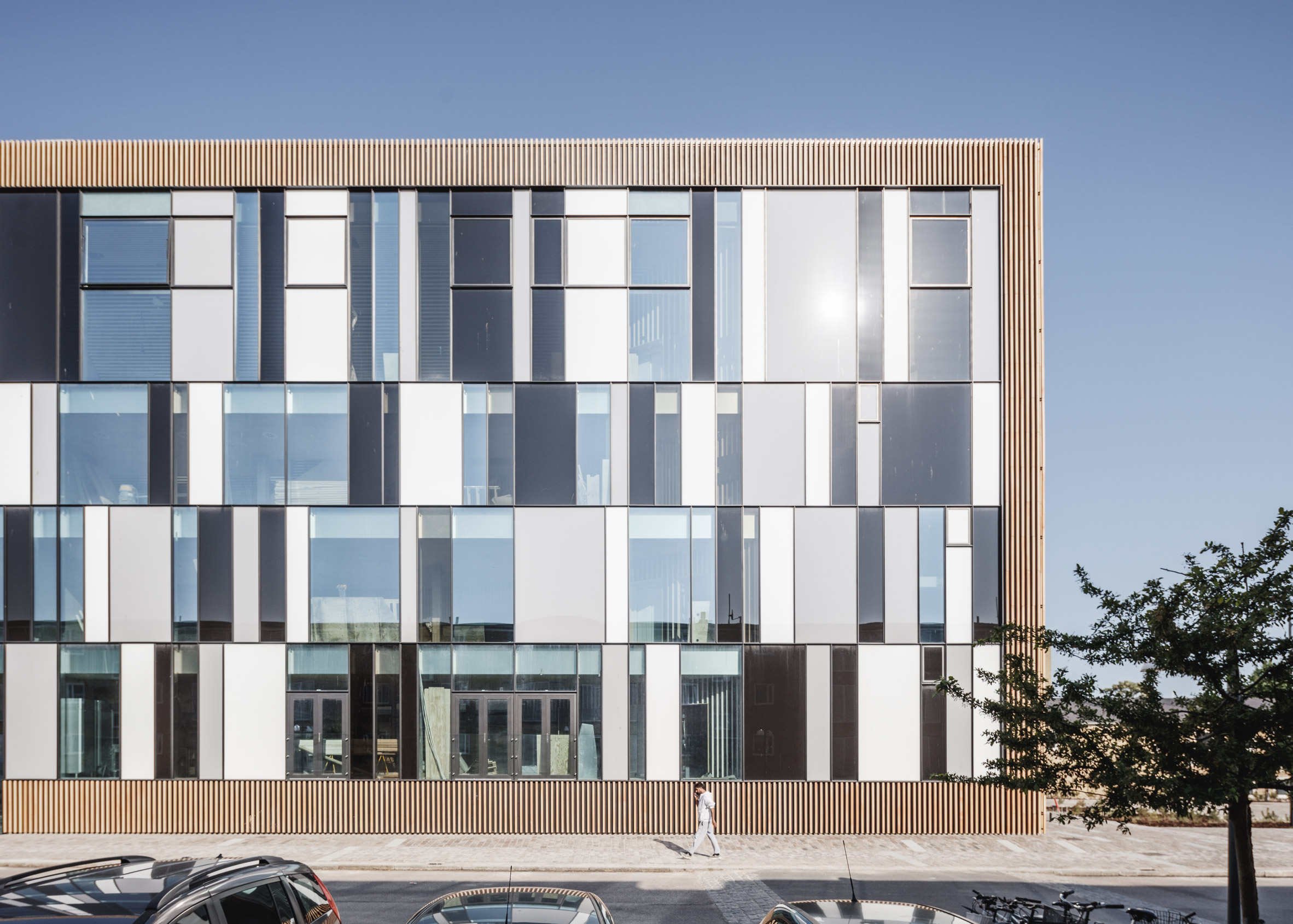 “The facade looks like a building turned inside out, displaying its many activities to the surroundings,” said architect and COBE founder, Dan Stubbergaard.

“The architecture is intended as an open invitation for people to come inside, while at the same time promoting safety in the area and also developing Tingbjerg’s unique character.” 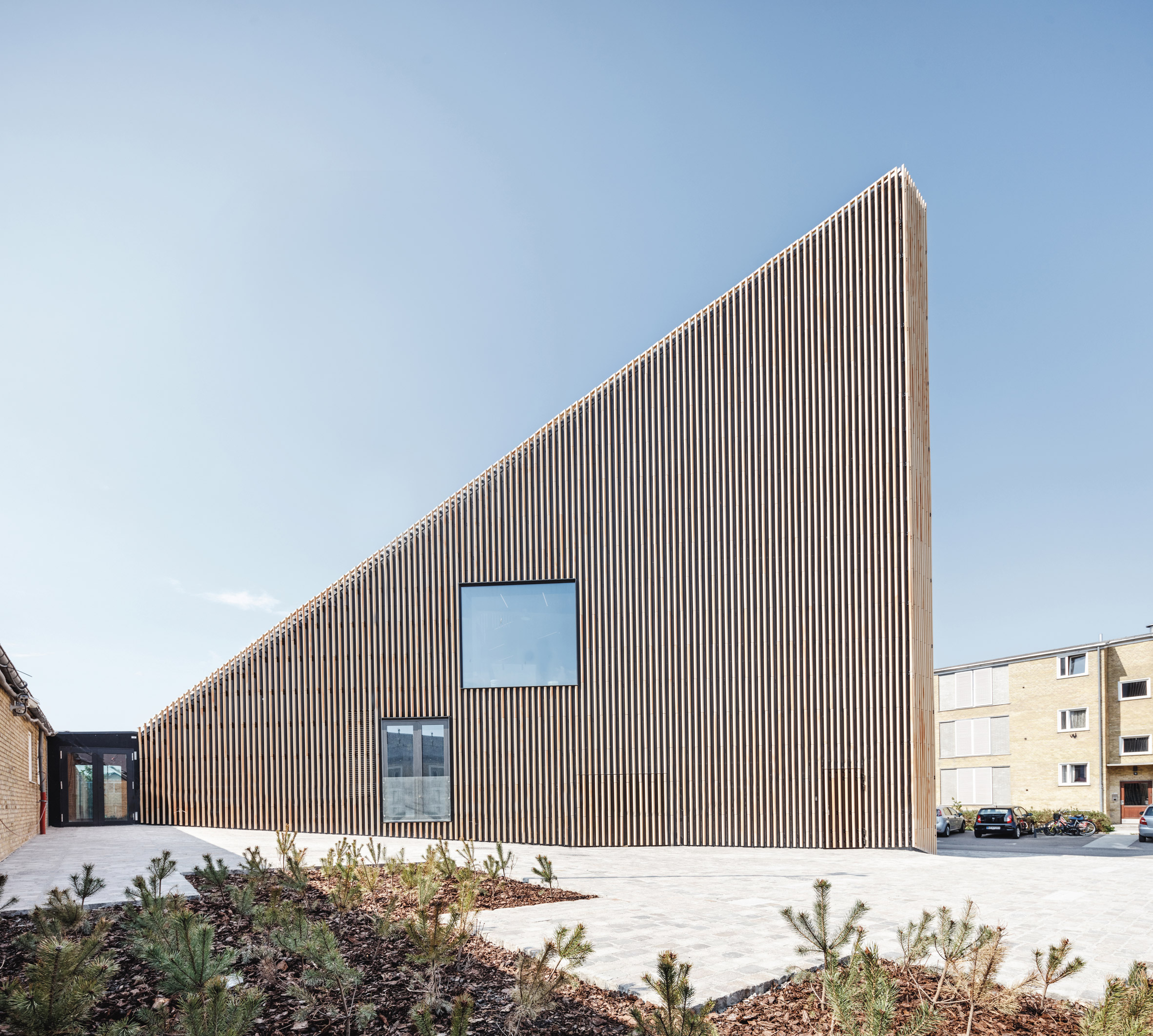 The building’s design and materials are also intended to evoke the style of its historic surroundings, particularly through the predominant use of yellow-brick cladding.

Its wedge-shaped form recalls the sloping roofs of its postwar neighbours, and is described by the architects as a “seamless shell” that “attempts to blend in, but also challenge Tingbjerg’s materiality and formal expression.” 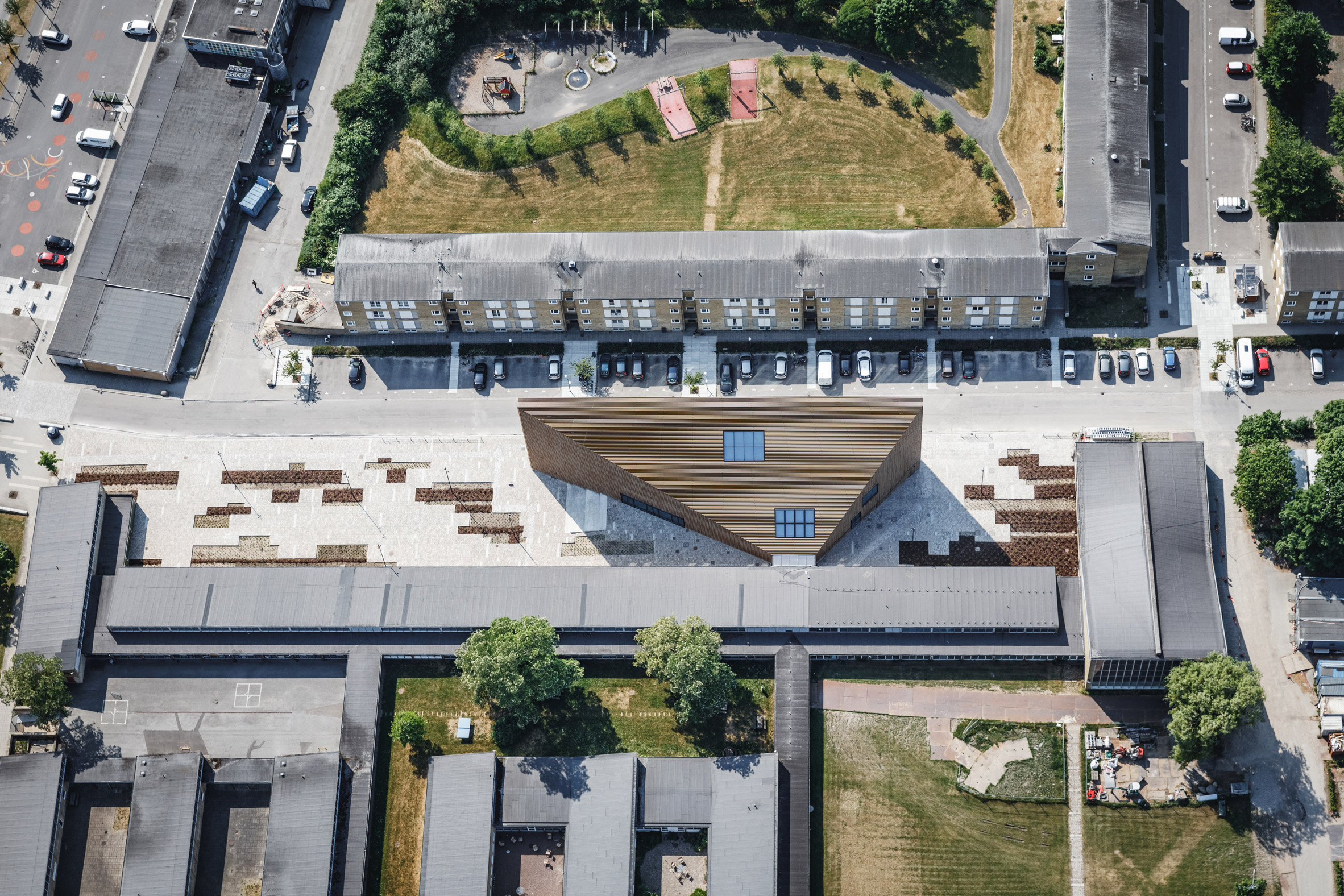 At either end the volume reduces to be just 1.5 metres wide and funnels down from four storeys to just one at the side pointing towards the school.

The wedge defines an open foyer at the heart of the building, which extends up to create a unifying space connecting the school’s infrastructure with the facilities on the various levels. 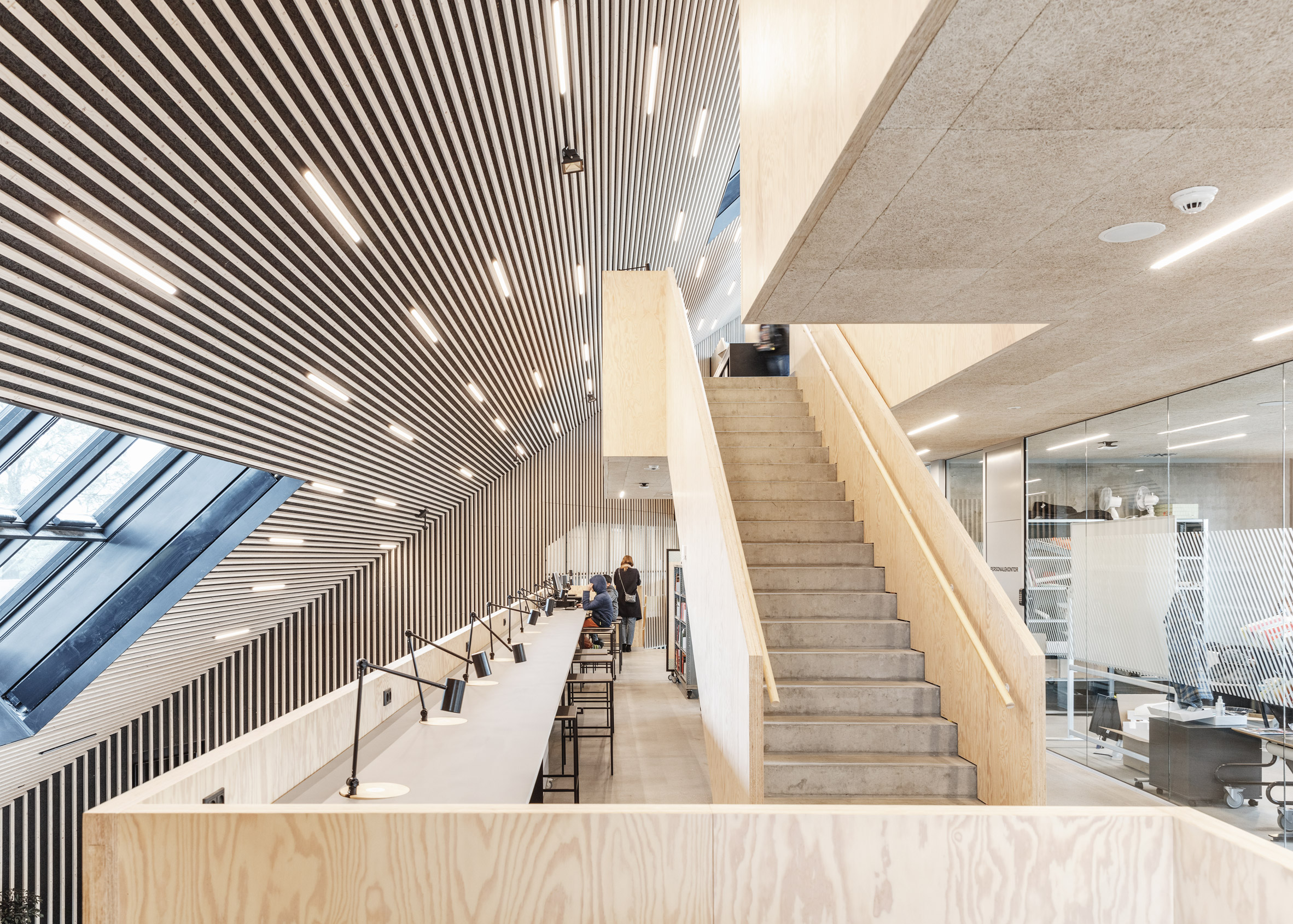 Narrow spaces along the sides of the wedge contain service areas including toilets and circulation, while the wider space overlooking the street accommodates multifunctional rooms distributed across all four storeys.

The floor plates on each level shift to create a series of balconies and niches that project out into the foyer, creating an affect that COBE compared to “a small mountain village clinging to a hillside”. 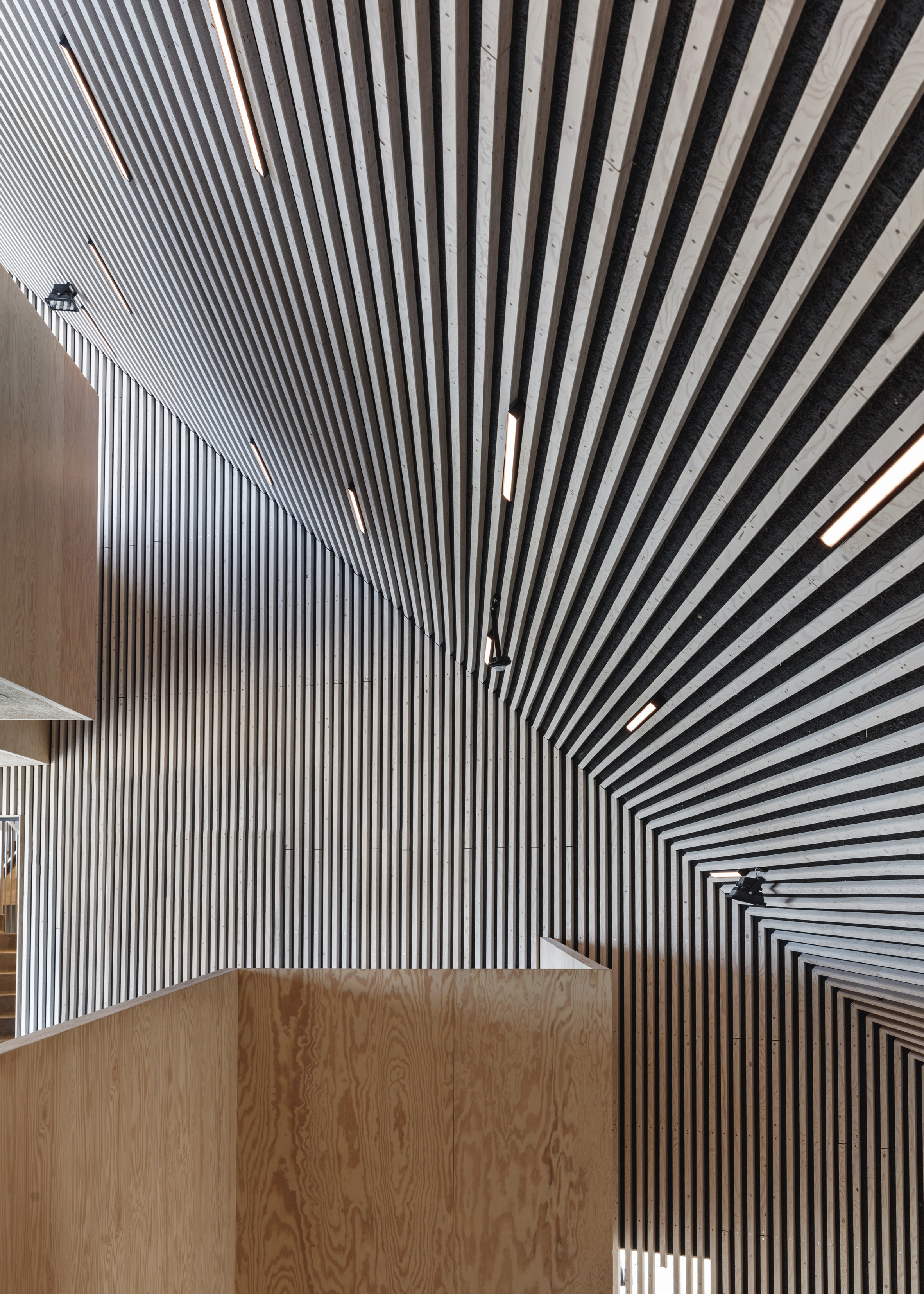 The interior is clad with plywood lamellas that create a striped pattern to reflect the rhythm of the external brickwork.

Plywood is used throughout to create surfaces with a grain that introduces natural texture to the rooms, including an auditorium looking onto the street that is wrapped in a chequerboard pattern of solid and perforated acoustic panels.

Snøhetta used timber to clad the atrium of Clagary’s new library, and Gonzalez Moix Arquitectura used local wood on the exterior ends of a community library in Lima.

COBE’s previous projects in Copenhagen include a cluster of faceted brick apartment blocks on the waterfront, and the transformation of a former grain silo into an apartment building with faceted balconies.