Pivoting doors, bulbous, stuccoed walls and a “cheeky window” are among the details that American architecture studio Dash Marshall has included in the overhaul of this Californian farmhouse.

Designed for a pair of empty nesters, Dash Marshall‘s House for Grandparents is a renovated 30-year-old ranch property in San Miguel, a small town in California’s San Luis Obispo County. 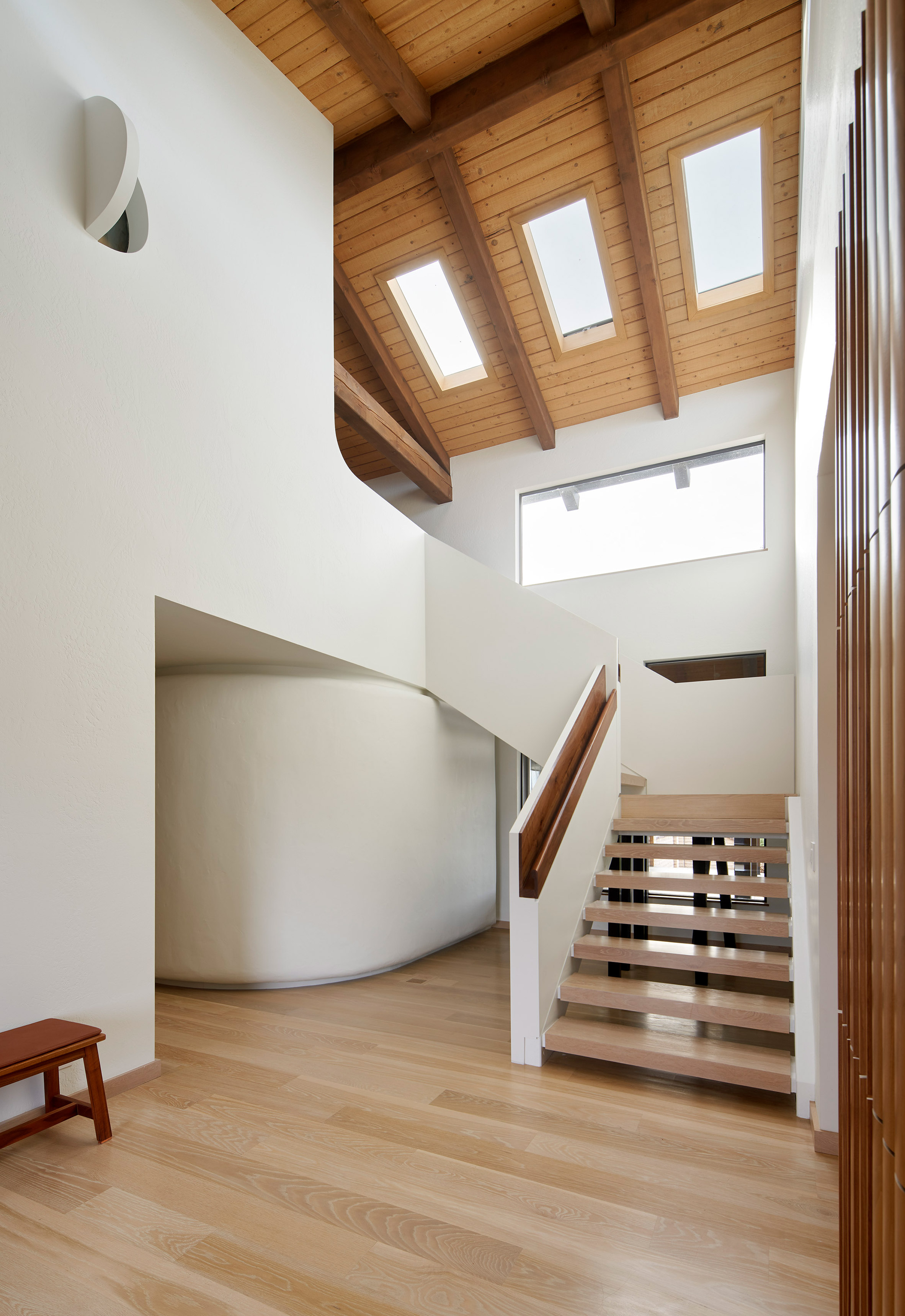 The surrounding area is home to two Spanish Missions – religious structures that were built in the state by Catholic priests during the late 18th and early 19th century to evangelise Native Americans.

After gutting the 4,000-square-foot (371-square-metre) residence, Dash Marshall took influences from the simple materials and geometric forms of these Missions. 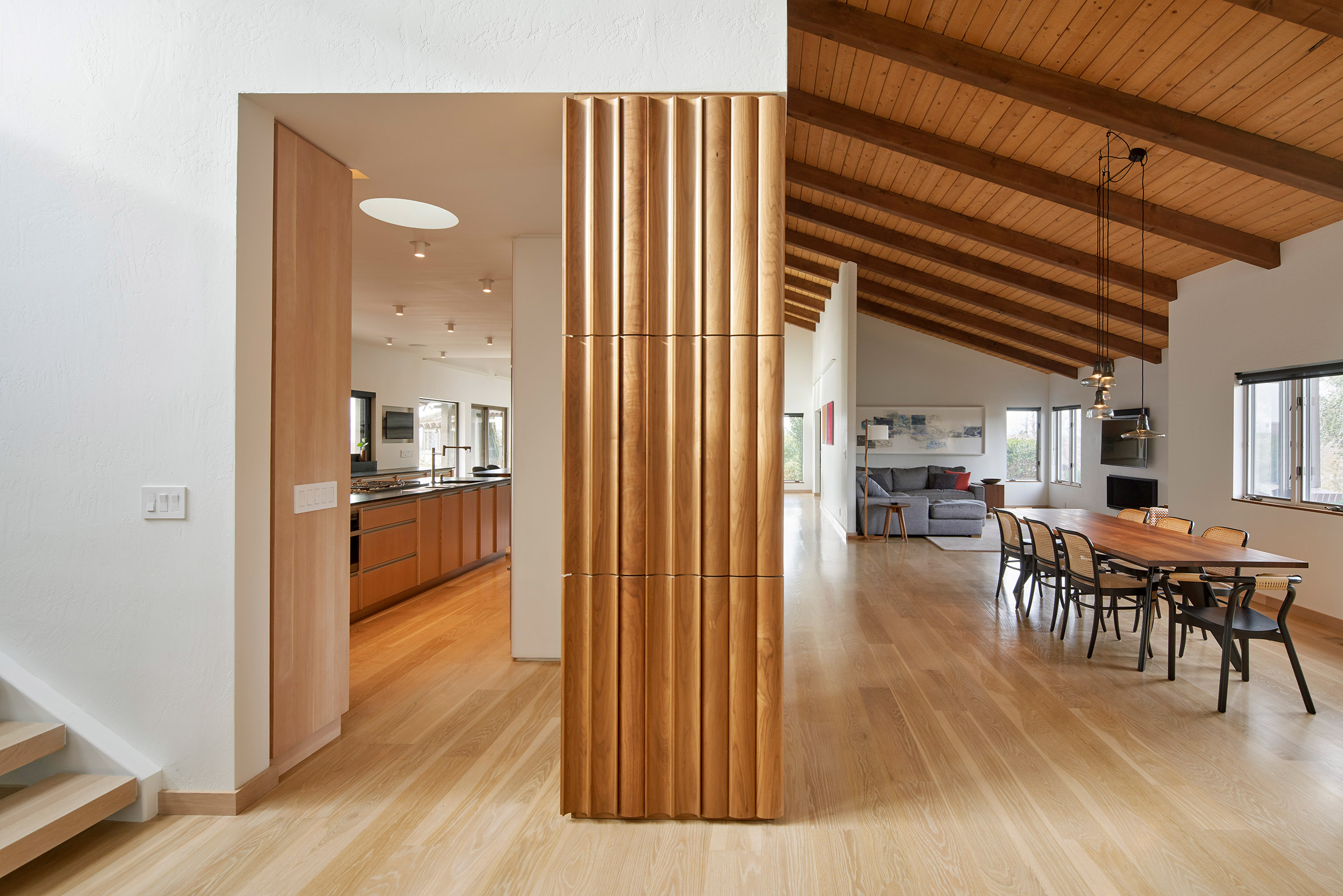 “We were interested in developing an architecture that was evocative of the California central coast without being historical,” studio co-founder Bryan Boyer told Dezeen.

“The missions are one of the strong reference points for the area, especially the Mission San Miguel and Mission San Antonio, which are closest.” 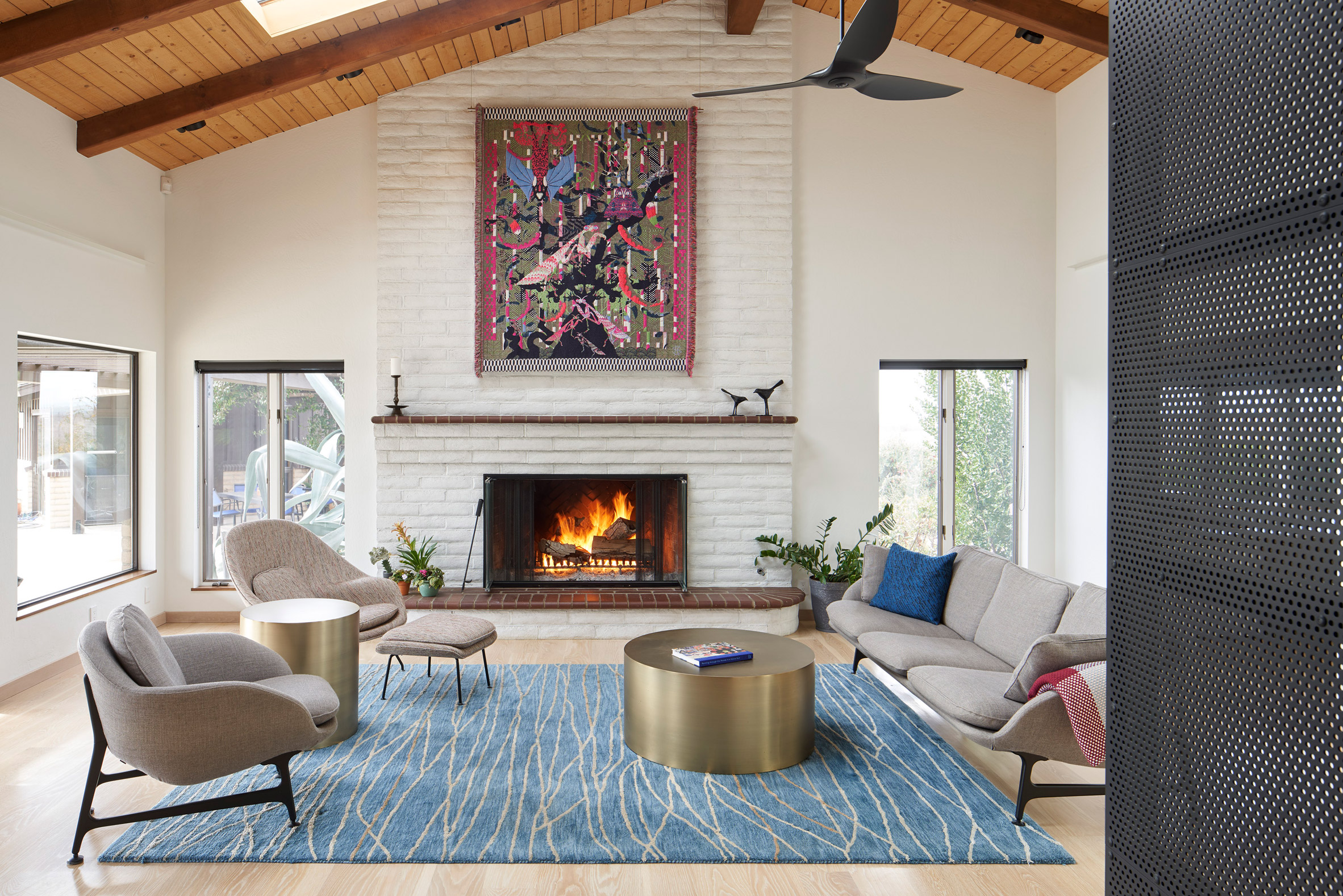 Other details include a ribbed wooden column inserted into the hallway, which is triangular in plan, and a “cheeky window” in one of the thick white walls. 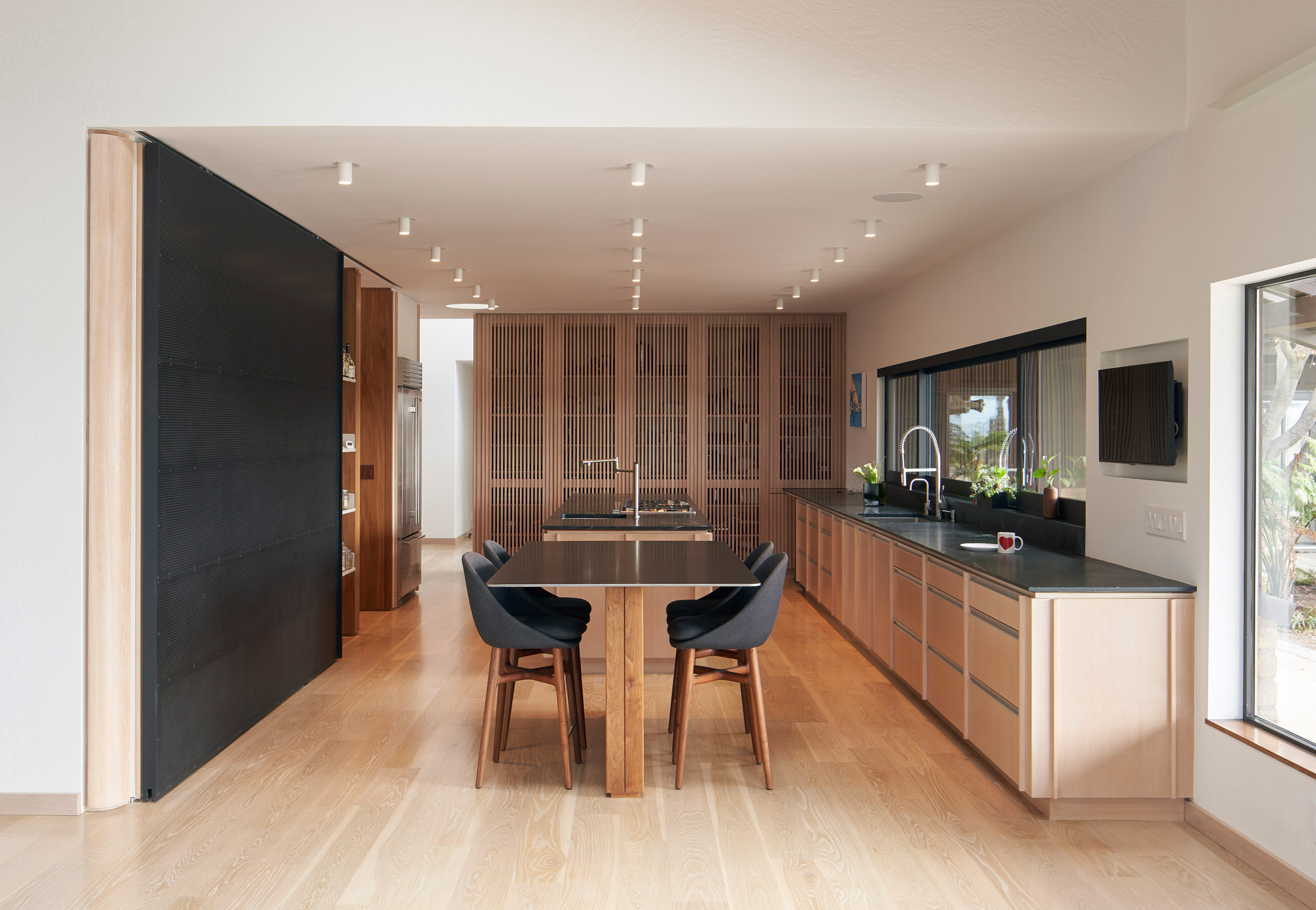 A semi-circular chunk of wall that extends beside the opening matches its size and shape to give the impression that it has been pushed open.

Missions also provided the cues for the arrangement of the spaces inside the residence, which Dash Marshall designed to allow the the grandparents to comfortably host their children and grandchildren. 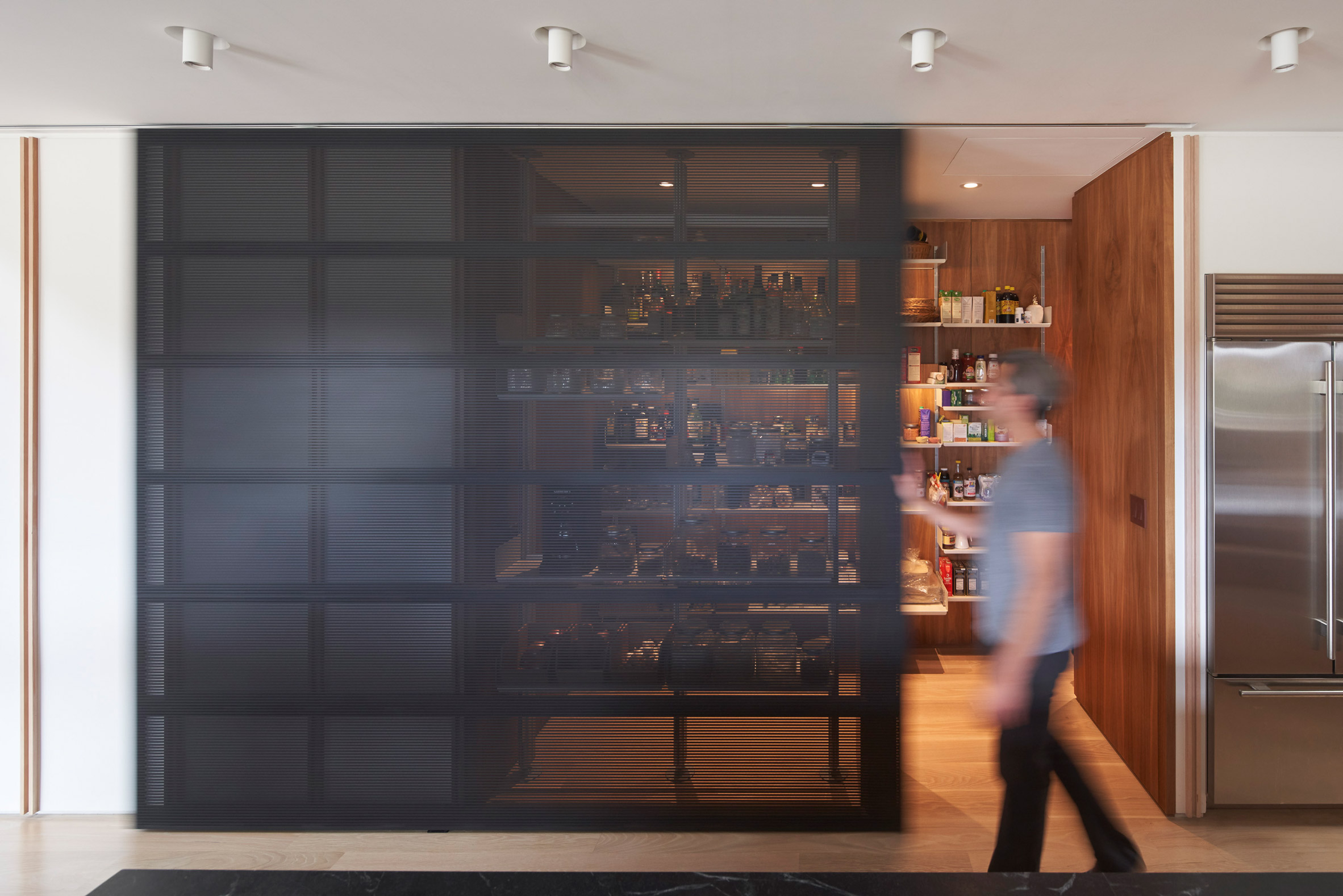 “Many of the spaces of the house are experiments in ritual and so share some kinship with the Missions, which are themselves literally places constructed around rituals,” said Boyer.

An example is the guest bathroom on the ground floor, which is located inside a curved white volume that the studio likens to a “large marshmallow”. 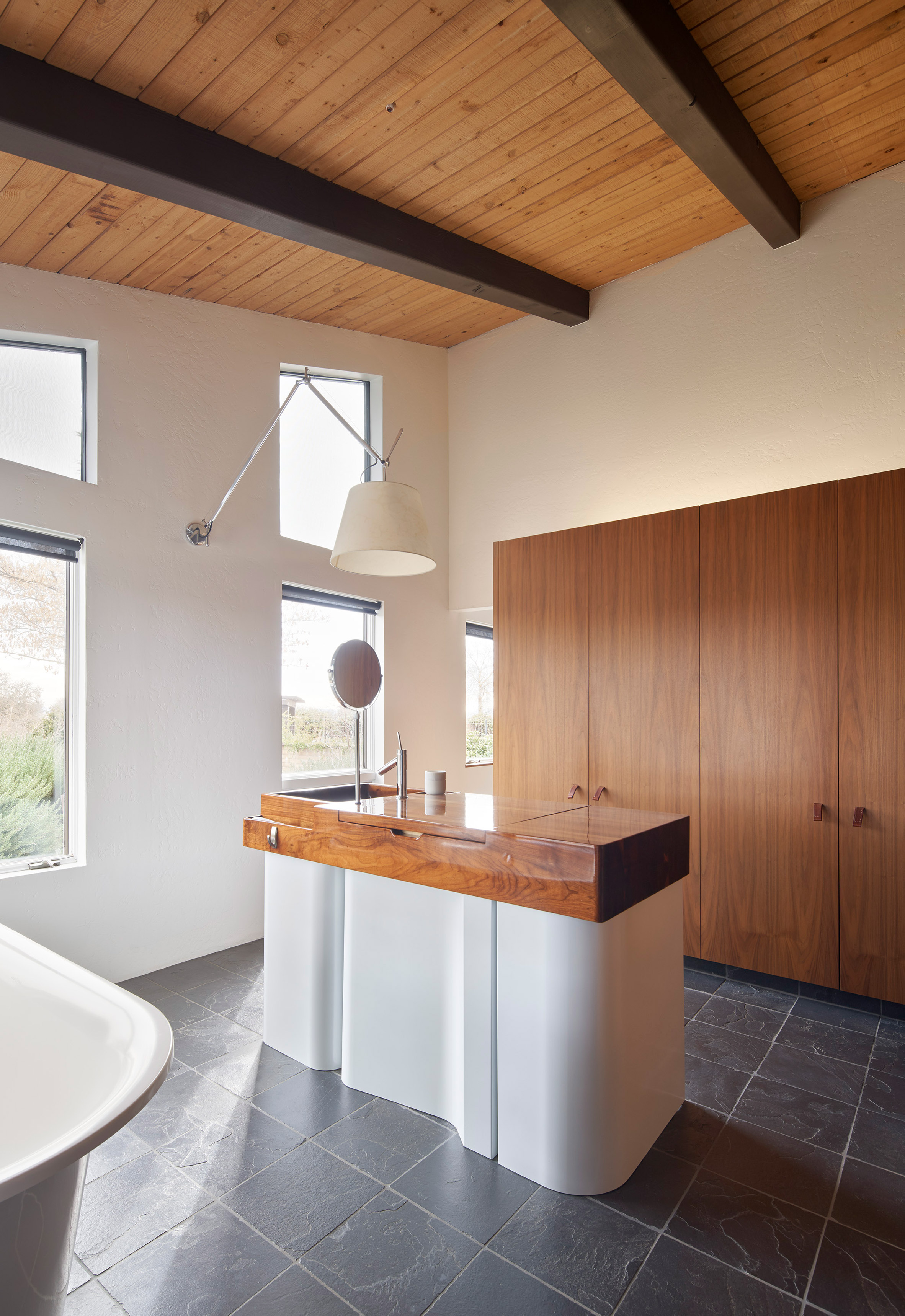 Inside, it is divided it into four areas for users to walk around starting with the the sink, a changing areas, followed by the shower and finally the toilet. The grandparent’s bathroom is organised around a sink topped with a solid walnut, and features no vanity mirror.

“The master bathroom, with the sink in the centre of the room as an island, inverts the traditional bathroom which is outwardly facing,” said the architect. “It does so for the eponymous grandparents, to create a space where they can also turn inwards.” 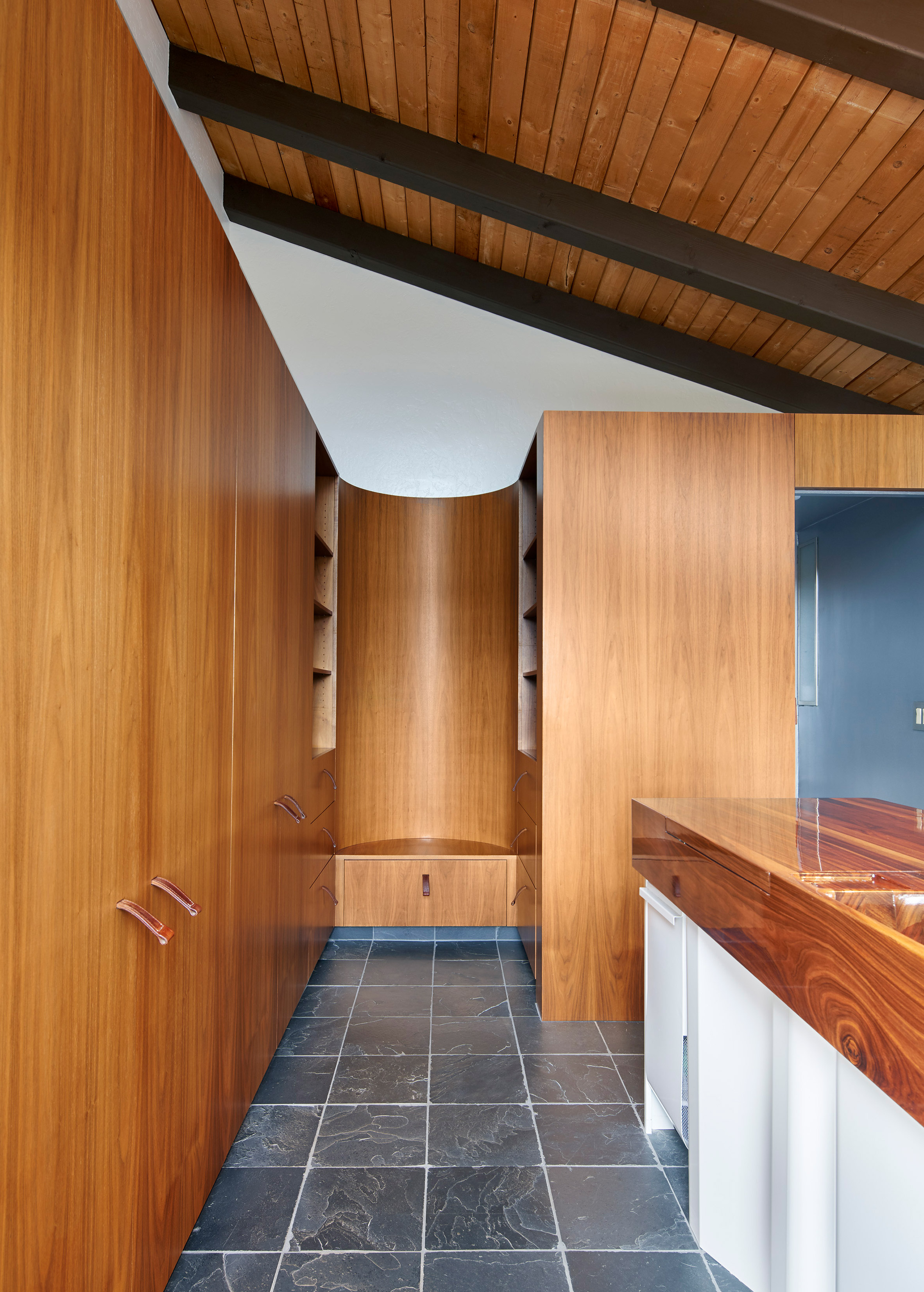 A large bathtub is placed on one side of the central island and wooden storage built into the opposing walls, with large windows bringing in plenty of natural light. It adjoins the master bedroom to make up a separate wing of the house.

Another “experiment” inside the property include the large pantry in the kitchen-cum-dining room. 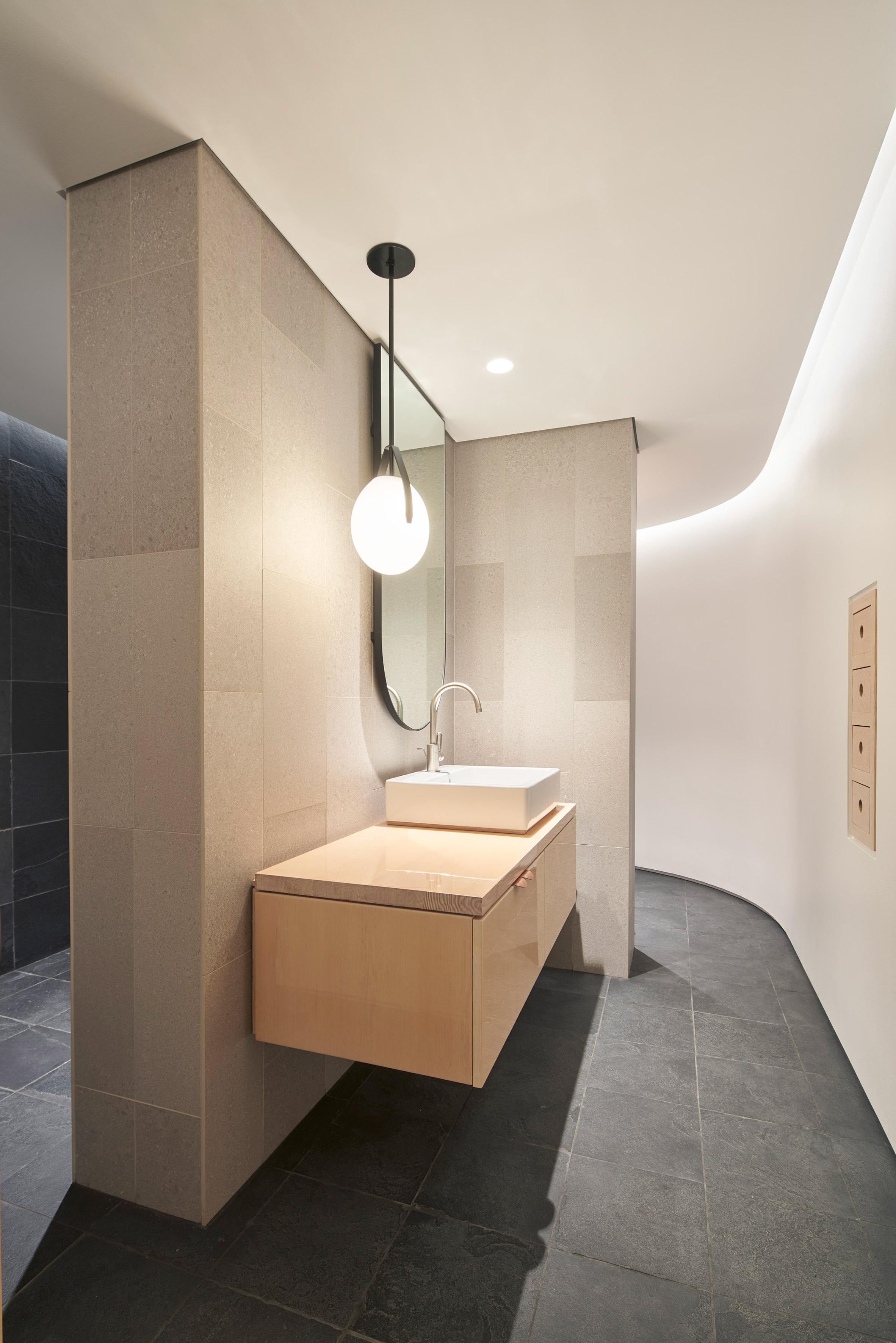 A slatted metal partition slides across the cabinet to reveal two layers of shelving, with the front slender row hosting “easy-to-grab” options like coffee and garlic, and the rear row offering deeper storage.

The kitchen and dining room also open onto the lounge, which features a stone hearth and white-painted brick chimney breast, and windows providing views of the surrounding property. 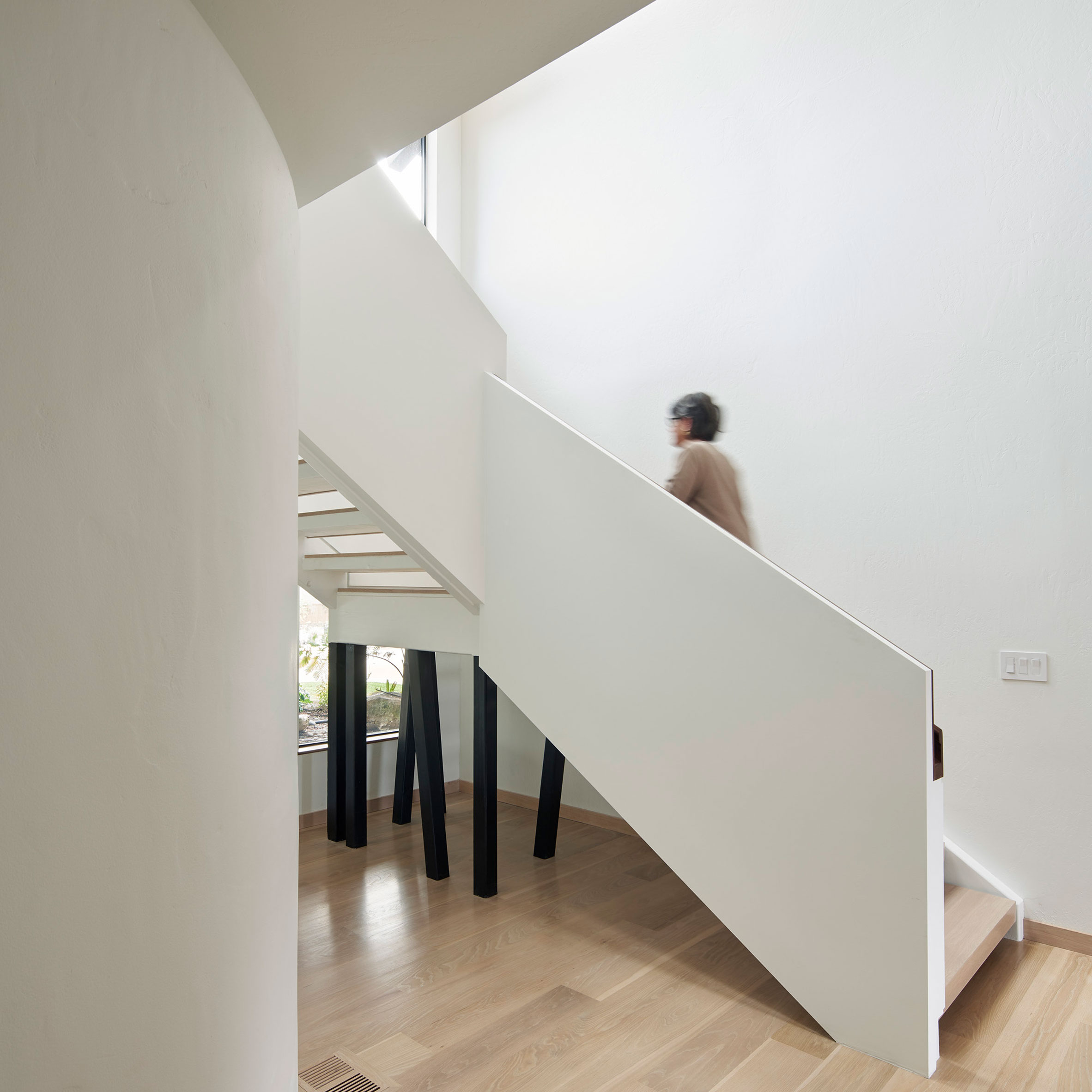 It provides the heart of the ground floor of House for Grandparents for the residents to entertain plenty of guests. There is also another living and dining room on this level, and two more bedrooms.

The residence is topped with a small first floor with a gabled roof occupies by a playroom for the grandchildren. 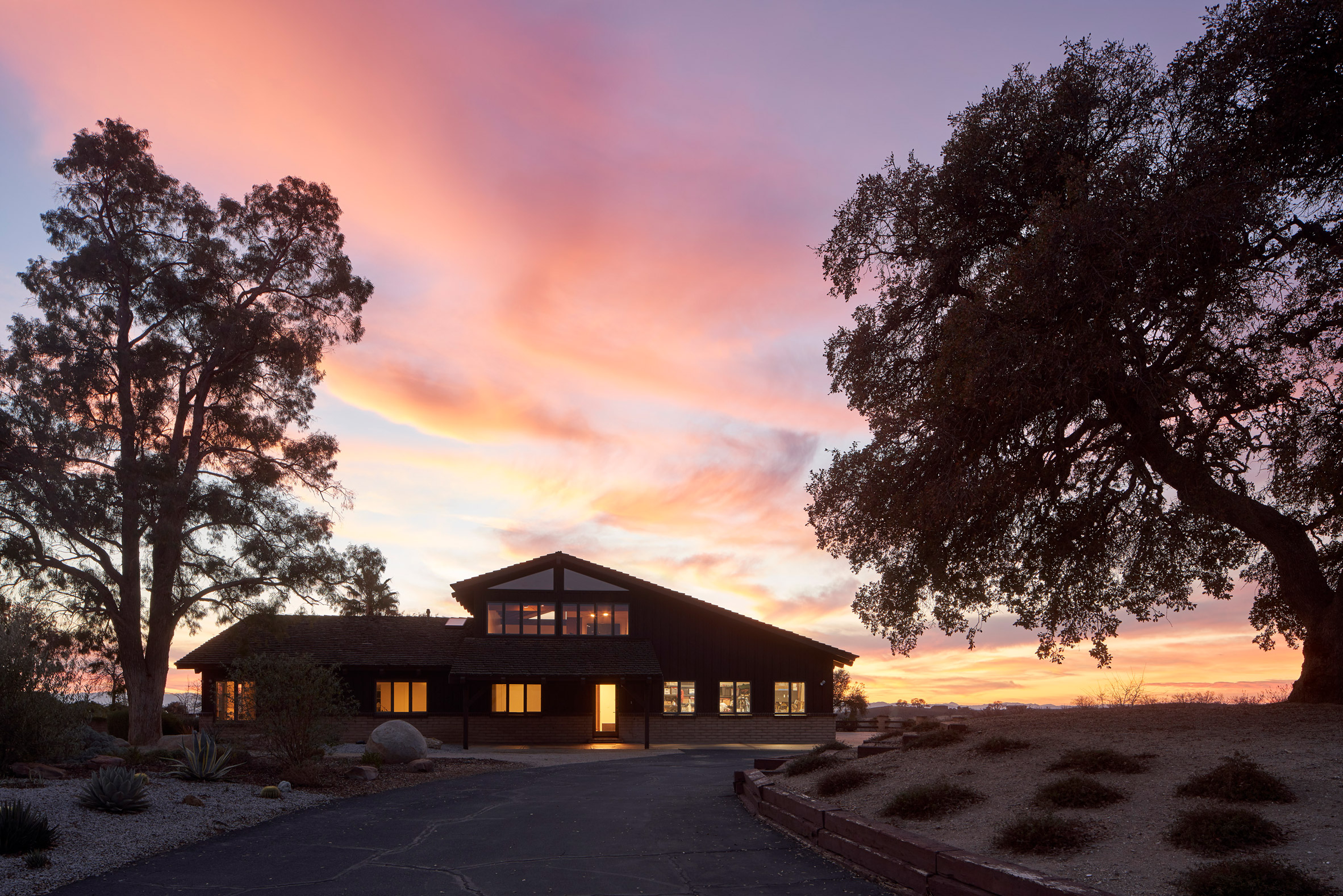 Boyer founded Dash Marshall – which has outposts in New York City and Detroit – in 2009 with Amy Yang and Ritchie Yao.

The architecture studio has previously combined two lofts in Tribeca into one apartment and converted a former pencil factory in Brooklyn into a shared workspace.

Photography is by Bruce Damonte.