Architecture studio dRMM created a visitor centre clad in salvaged wooden boards as part of its overhaul of a seaside pier in Hastings, England – one of six projects in the running for this year’s Stirling Prize.

The architects were tasked with repairing the century-old pier after a devastating fire in 2010, which swept through the pavilion and destroyed the amusements, kiosks, shops and a bandstand that previously occupied the large deck. 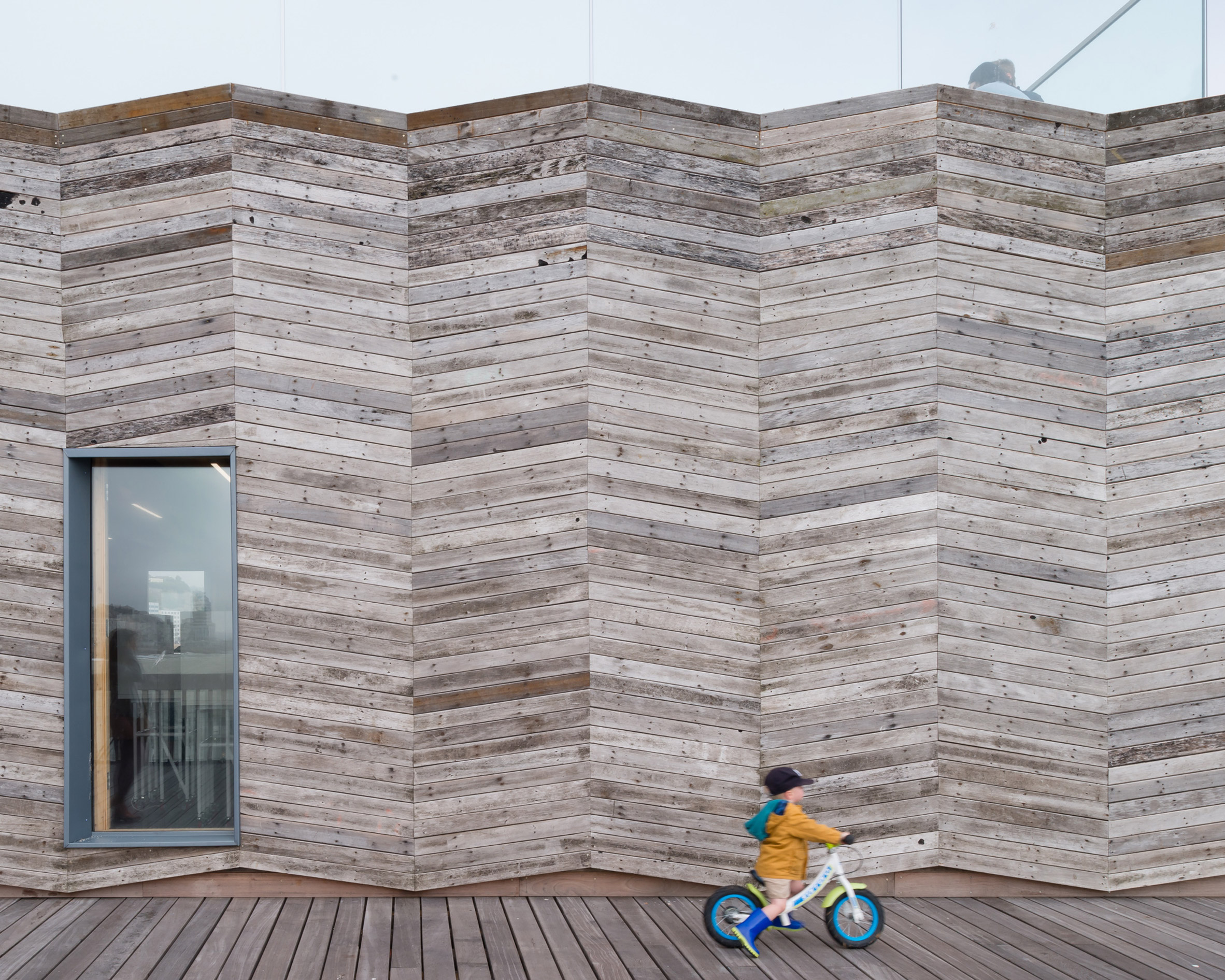 Rather than promoting the typical pier format – a deck covered with poorly constructed commercial booths – the architects proposed an open, multipurpose space incorporating a limited number of structures.

“[Our] conceptual basis for the re-design of the pier was not to create the predictable unnecessary hero building at the end, but instead providing open space to allow universal access,” said dRMM, which is led by architects Alex de Rijke, Sadie Morgan and Philip Marsh.

“The focus was on creating a well-serviced, strong platform that could support a variety of events and uses from circuses to music events, fishing to markets,” the architects added. “Different users can bring their own architecture to plug in.” 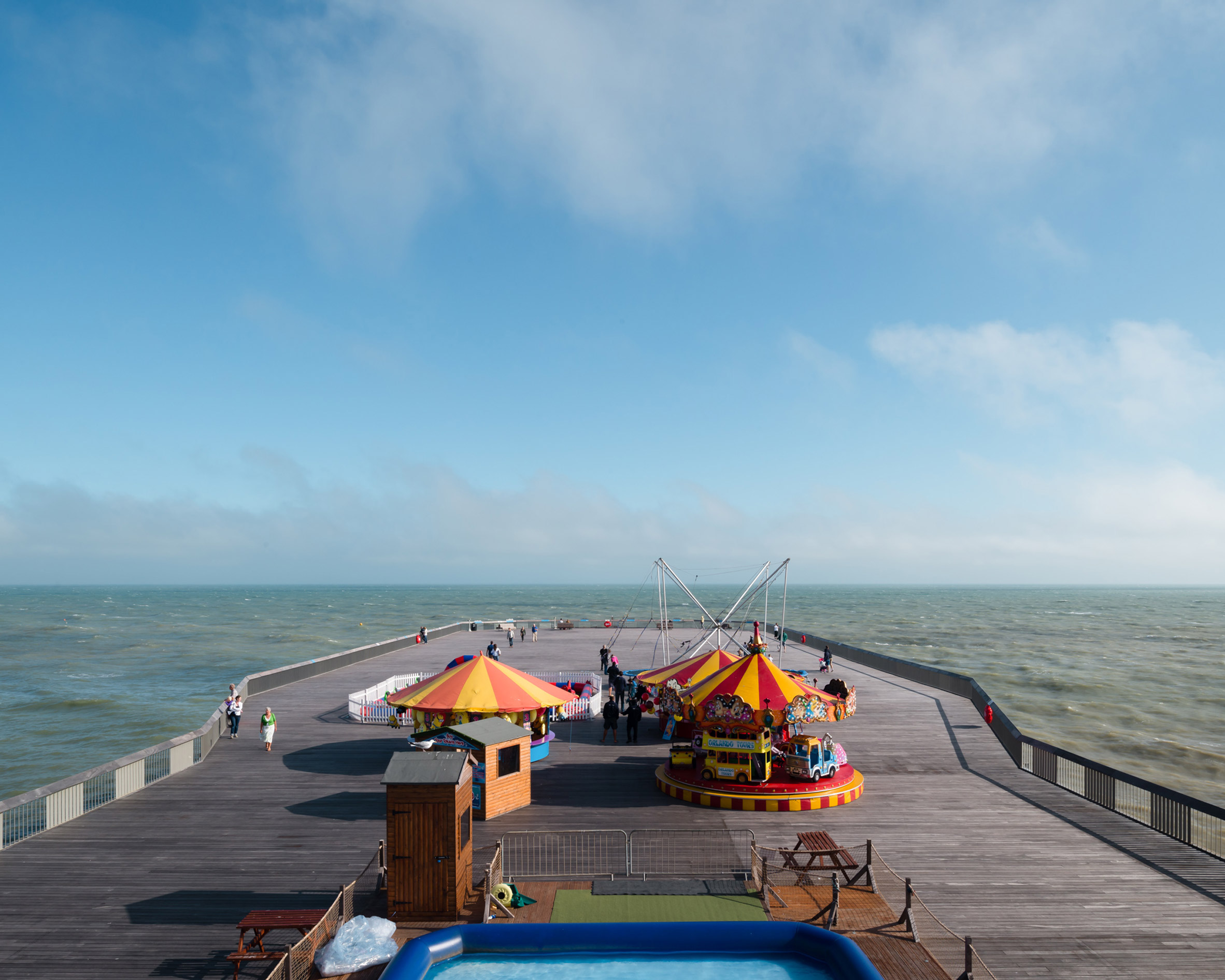 The pier was first constructed in 1872, although the pavilion was built in 1922, as the original one was destroyed in an earlier fire, in 1917. The pier enjoyed great success in the 1930s, but had been neglected in recent decades, and was permanently closed in 2008.

London-based dRMM chose to focus its attention on transforming the pier into a space more suited to the 21st century, following a series of research trips, debates, workshops and events attended by locals of the Hastings and St Leonards area. 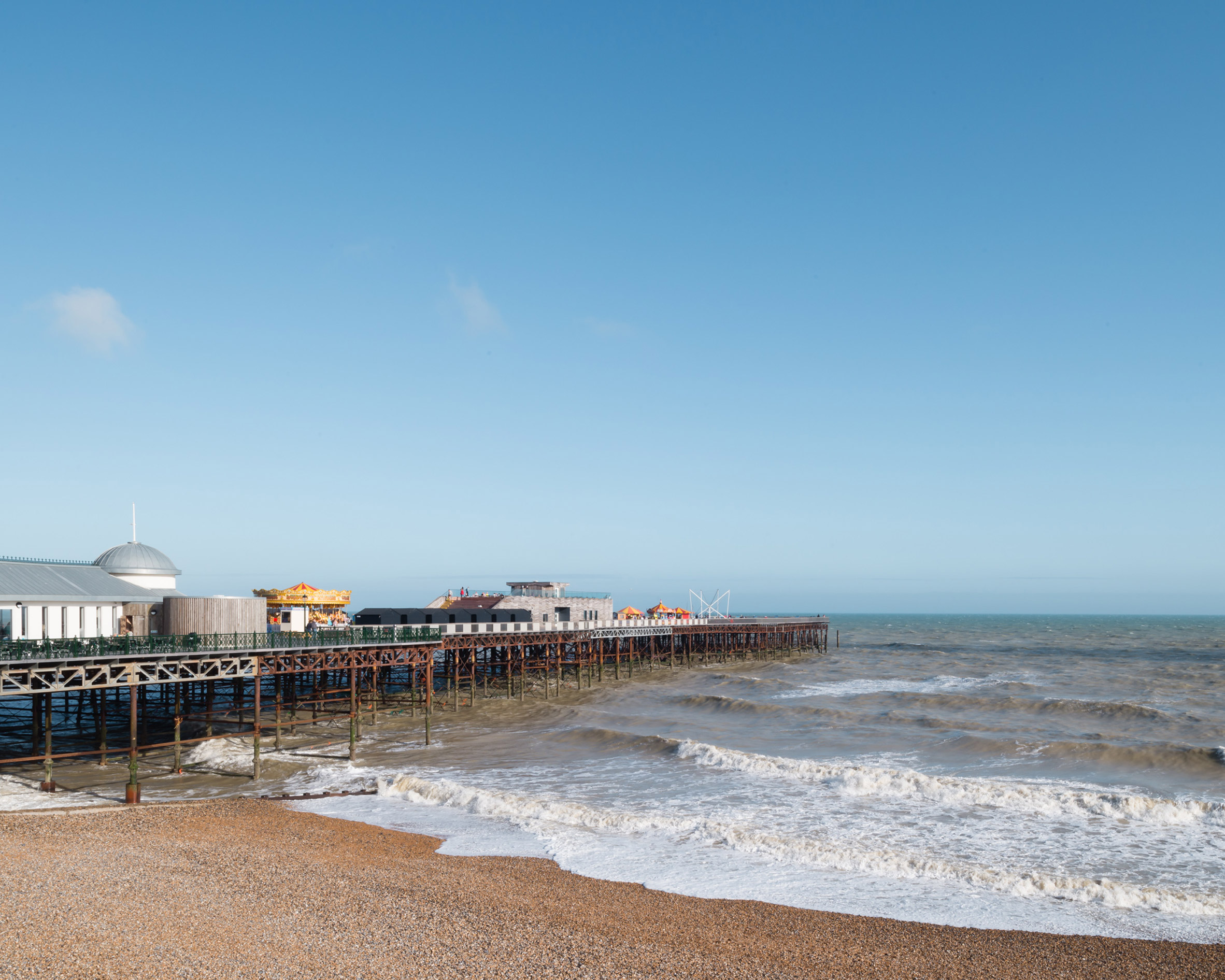 Much of the project’s budget and the architects’ efforts went towards repairs to the pier’s substructure, which had been subjected to storm damage and sea erosion, as well as the destruction caused by the fire.

These repairs were enabled by a grant from the Heritage Lottery Fund, which was also used to refurbish the derelict pavilion and transform it into an open-plan restaurant lined with large windows.

A pair of circular extensions added to the rear of the pavilion accommodate a kitchen, staff facility and toilet. 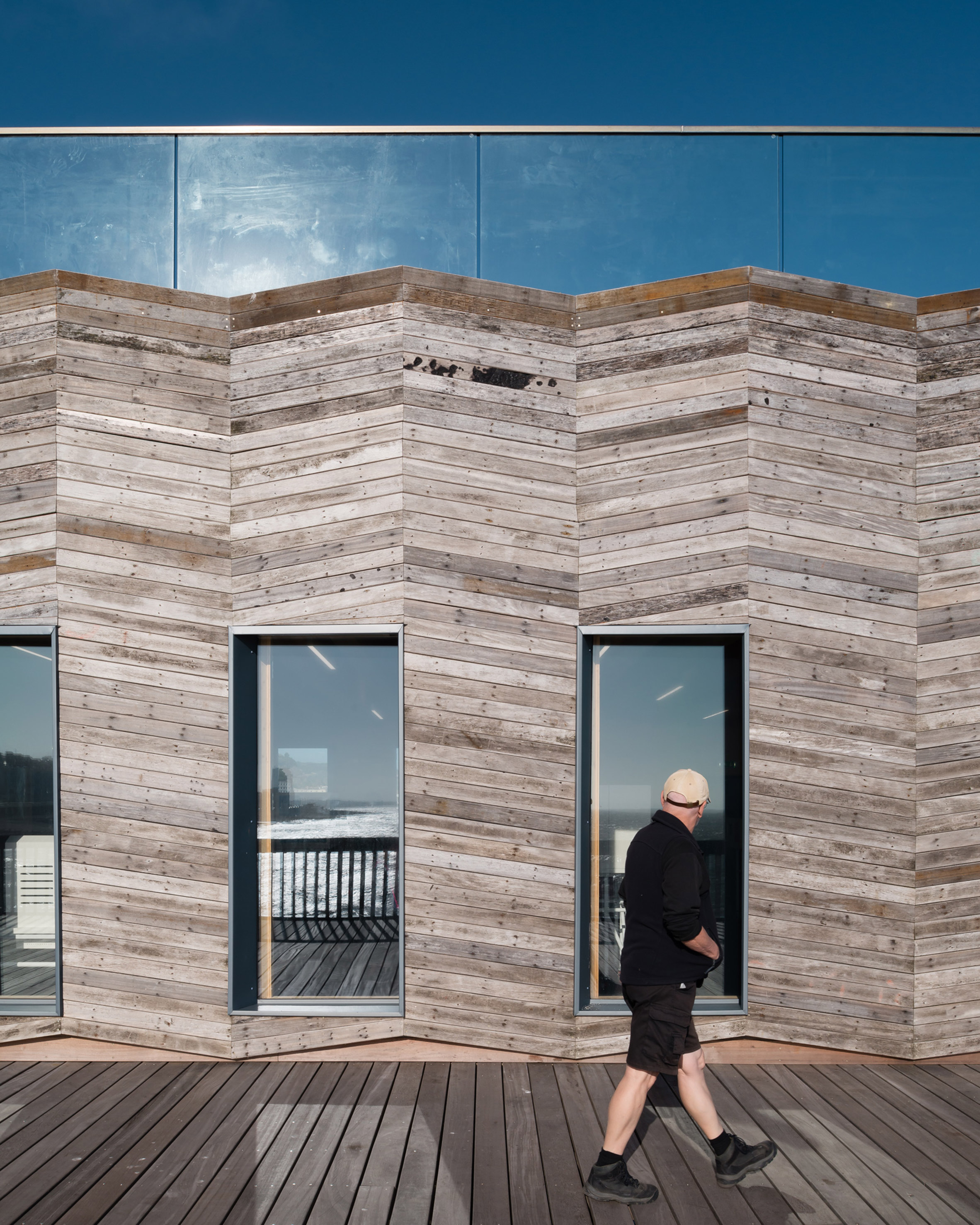 In addition to the pavilion, the only other structures currently on the new pier are a group of trading stalls evoking traditional beach huts, and a new visitor centre.

The visitor centre, which provides a flexible venue for events and exhibitions, is constructed from cross-laminated timber and clad in wood that was retrieved following the 2010 fire. 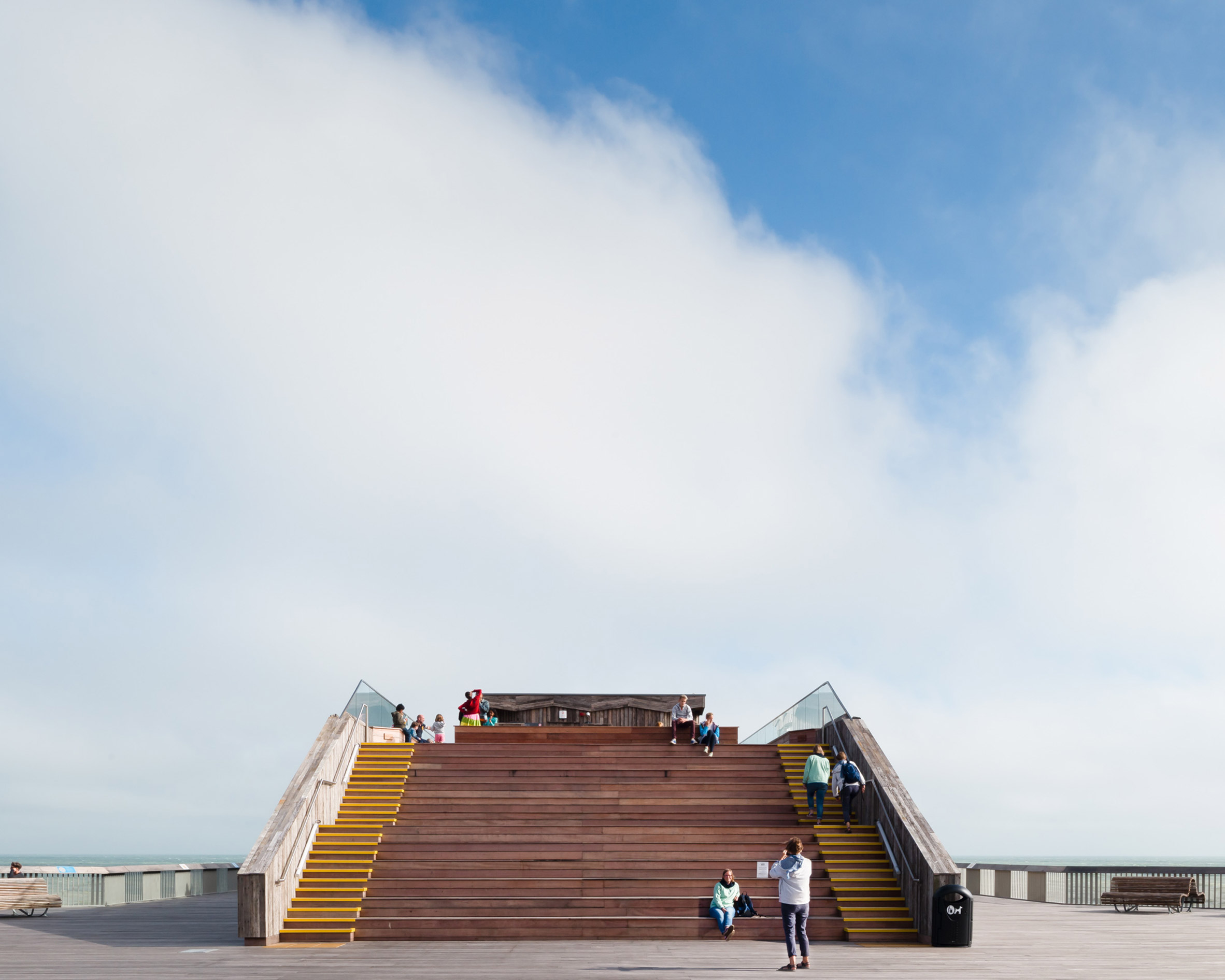 The reclaimed hardwood cladding is applied in a wavy pattern to the visitor centre, and is also used for the circular service cores added to the pavilion.

The roof of the visitor centre functions as a belvedere or viewpoint looking out to sea and back towards the town. It is reached by steps incorporated into either side of terraced seating that extends up from the deck. 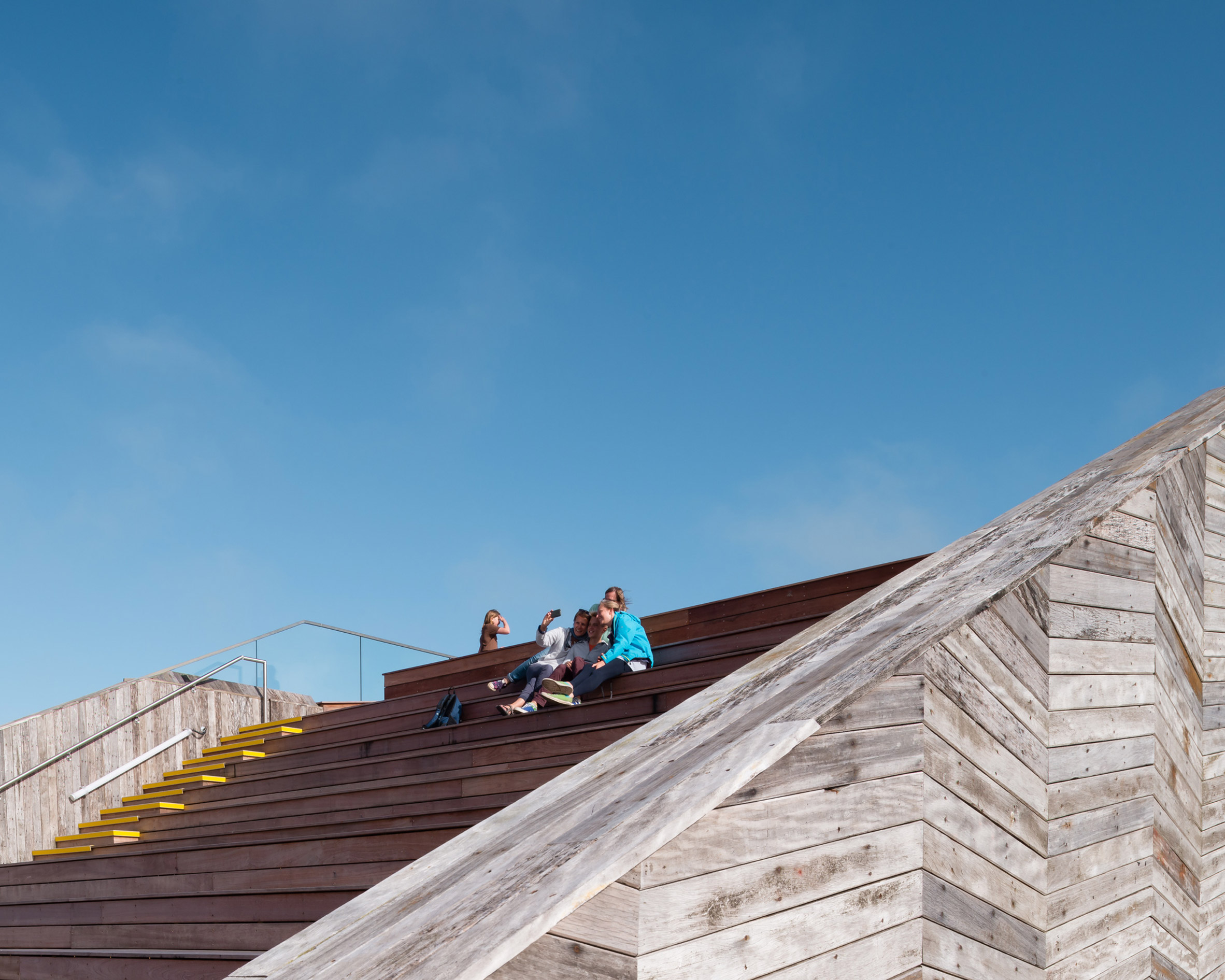 The open rooftop space is wrapped with a glass balustrade to enhance the sense of being surrounded by the sea. This effect is also supported by the introduction of a louvred balustrade lining the perimeter of the deck.

Inside, exhibition design studio Designmap have installed a series of interactive installations, including a “topsy-turvy periscope”. 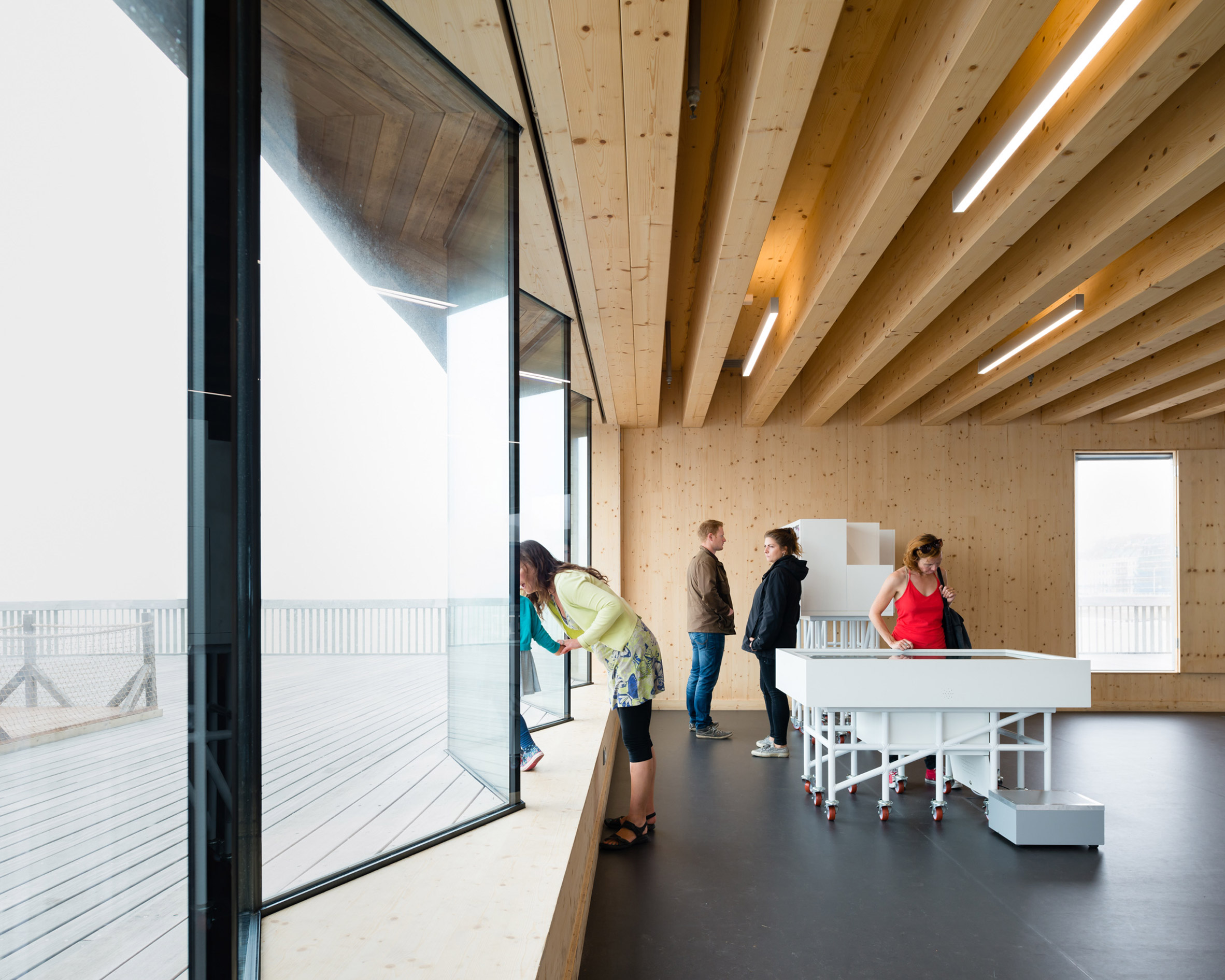 Furniture added to the pier was designed by dRMM with local firm Hastings & Bexhill Wood Recycling, and built as part of a local employment initiative using more of the reclaimed wood. 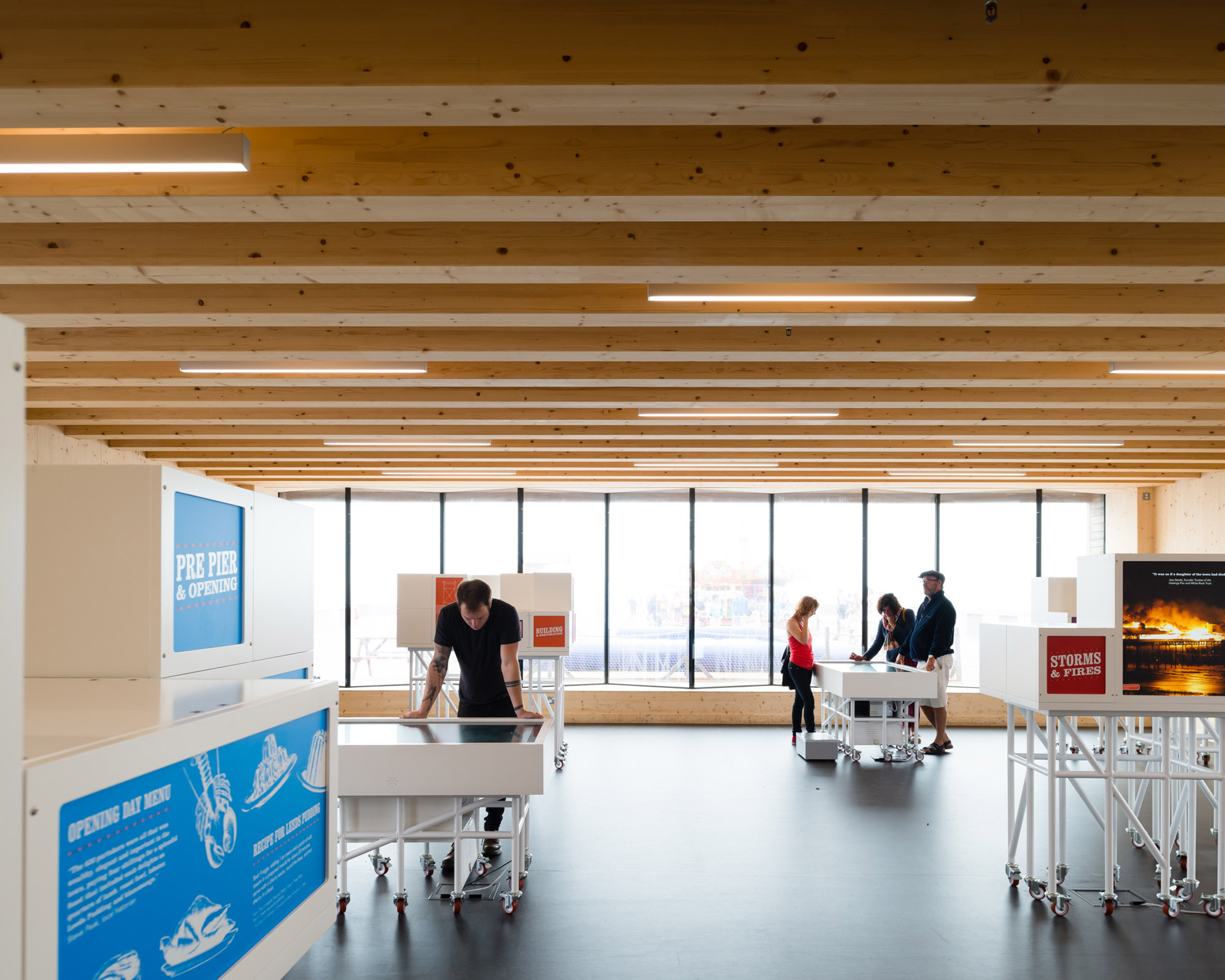 Proposals for future development of the pier include a ramp improving the connection between the deck and sea level, a landing stage for boats, and a mobile roof canopy that could be used for large scale events. 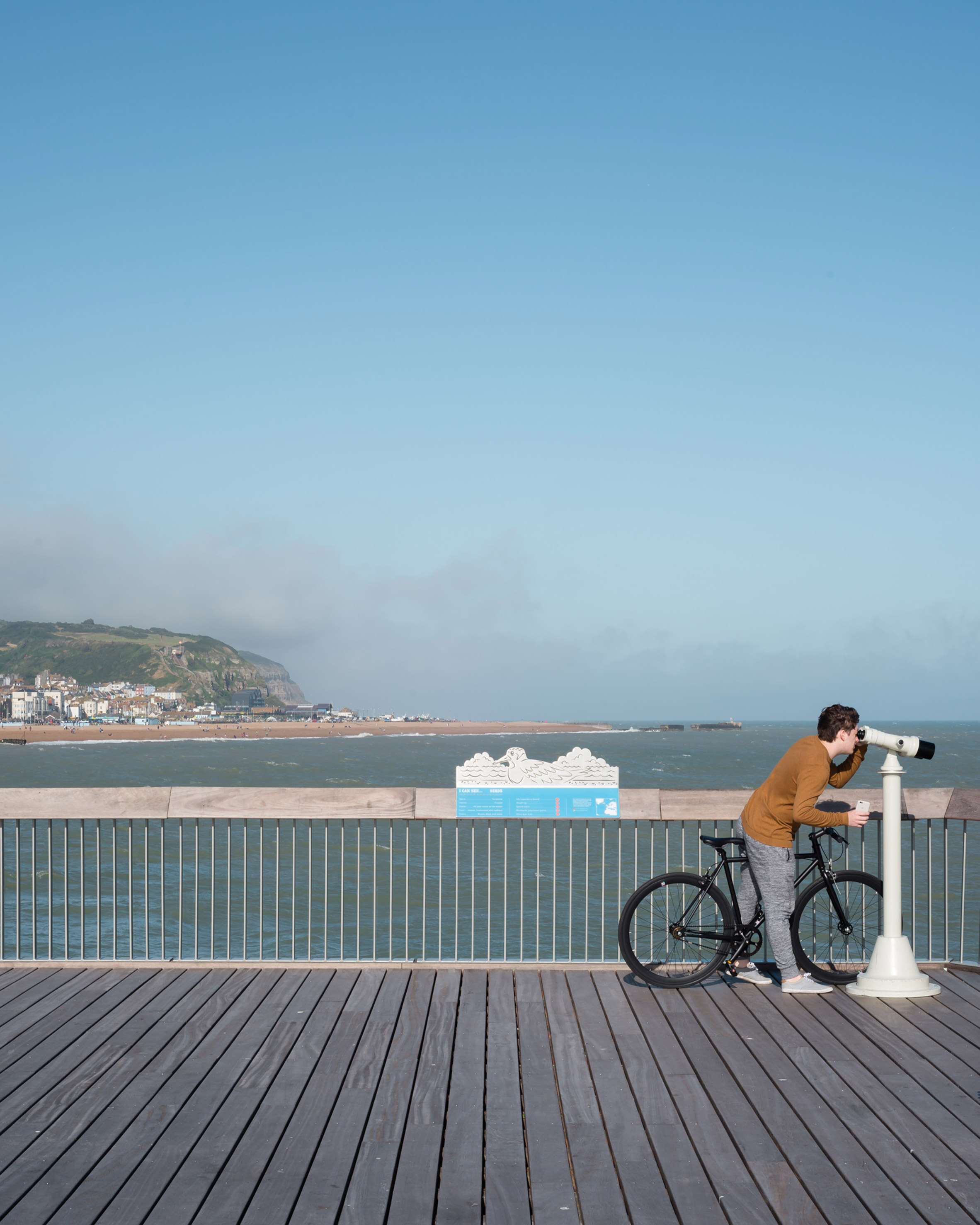 Hastings Pier is one of six projects on the shortlist for the RIBA Stirling Prize 2017, alongside buildings including a studio for photographer Juergen Teller by 6a Architects and a new wing at the British Museum by Rogers Stick Harbour + Partners.

dRMM’s previous projects include a golden wedding chapel in the seaside town of Blackpool, and a cancer-care centre featuring a courtyard surrounded by rippling glass walls in Oldham. The studio ranked at number 392 on the inaugural Dezeen Hot List.

Photography is by Jim Stephenson.