From the publishers. The April 2017 issue of a+u is devoted to the work of MVRDV, the architectural office based in the Netherlands. This is the third of the MVRDV FILES series by a+u, following MVRDV FILES 1 in 2002 and MVRDV FILES 2 in 2007.

As was done in the first two volumes, the projects in this issue are organized by the project number, which corresponds to the starting dates of the projects. In the past decade, MVRDV has completed some of their world-famous projects including the Book Mountain and Market Hall. These projects were featured in the second volume when they were still in the planning phase. Back then, many of us thought these projects were visionary.

After 24 years since the establishment of the office, MVRDV is now realizing many of their “visions”. They believe in the positive possibilities that architecture can show to the society, and strive to make them a reality. Through the featured 37 projects and interviews with the three directors, we invite our readers to immerse in the future of architecture that MVRDV is envisioning. 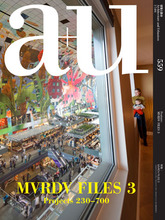