Atelier XÜK has added a corrugated-metal attic room to this Spanish colonial-style house, which was designed in the 1920s by a Hungarian architect for a plot in Shanghai‘s French quarter. 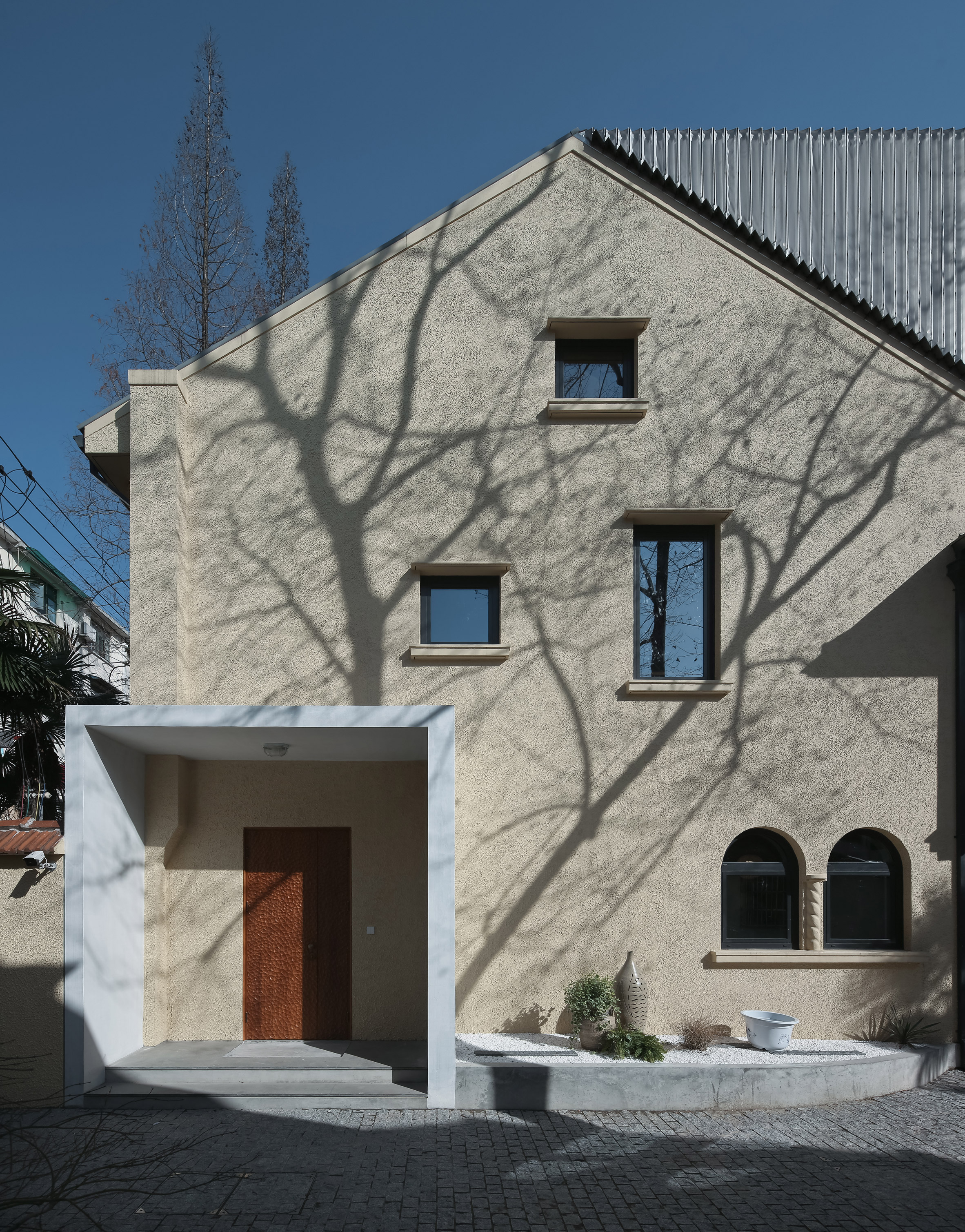 The villa that local studio Atelier XÜK renovated and extended was originally designed by architect Ladislav Hudec. It is located in a part of the city known as the Columbia Circle, which was formerly part of a French concession from 1849 until 1943. 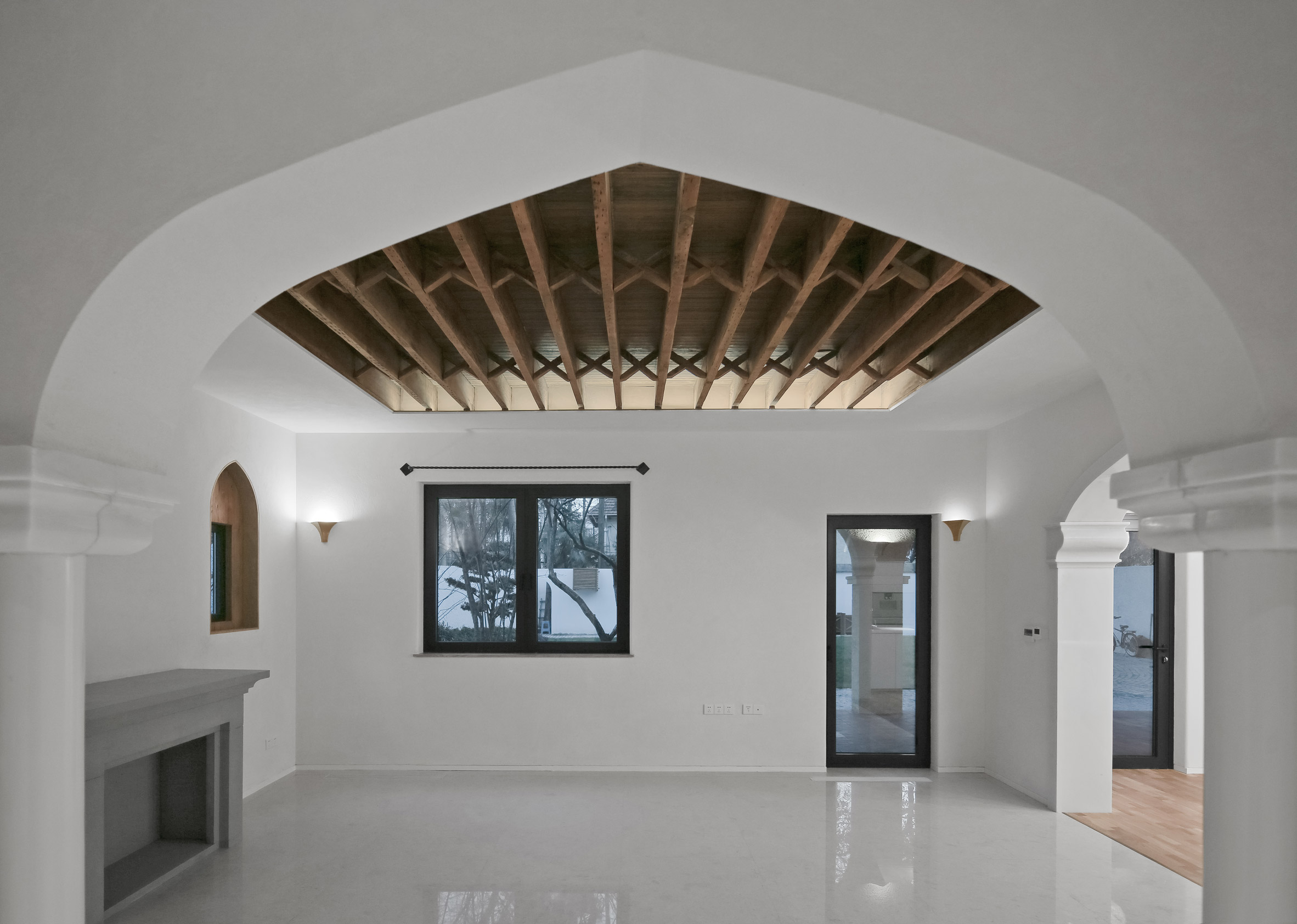 The city block takes its name from the Columbia Country Club, which was designed by American architect Elliott Hazzard and is located close to the house. The area was developed in phases since then 1920s but is still known for its generously sized streets and prestigious properties.

Hudec designed several houses in Shanghai in various architectural styles, including the Spanish-colonial villa, which is now surrounded by residential developments of different scales. 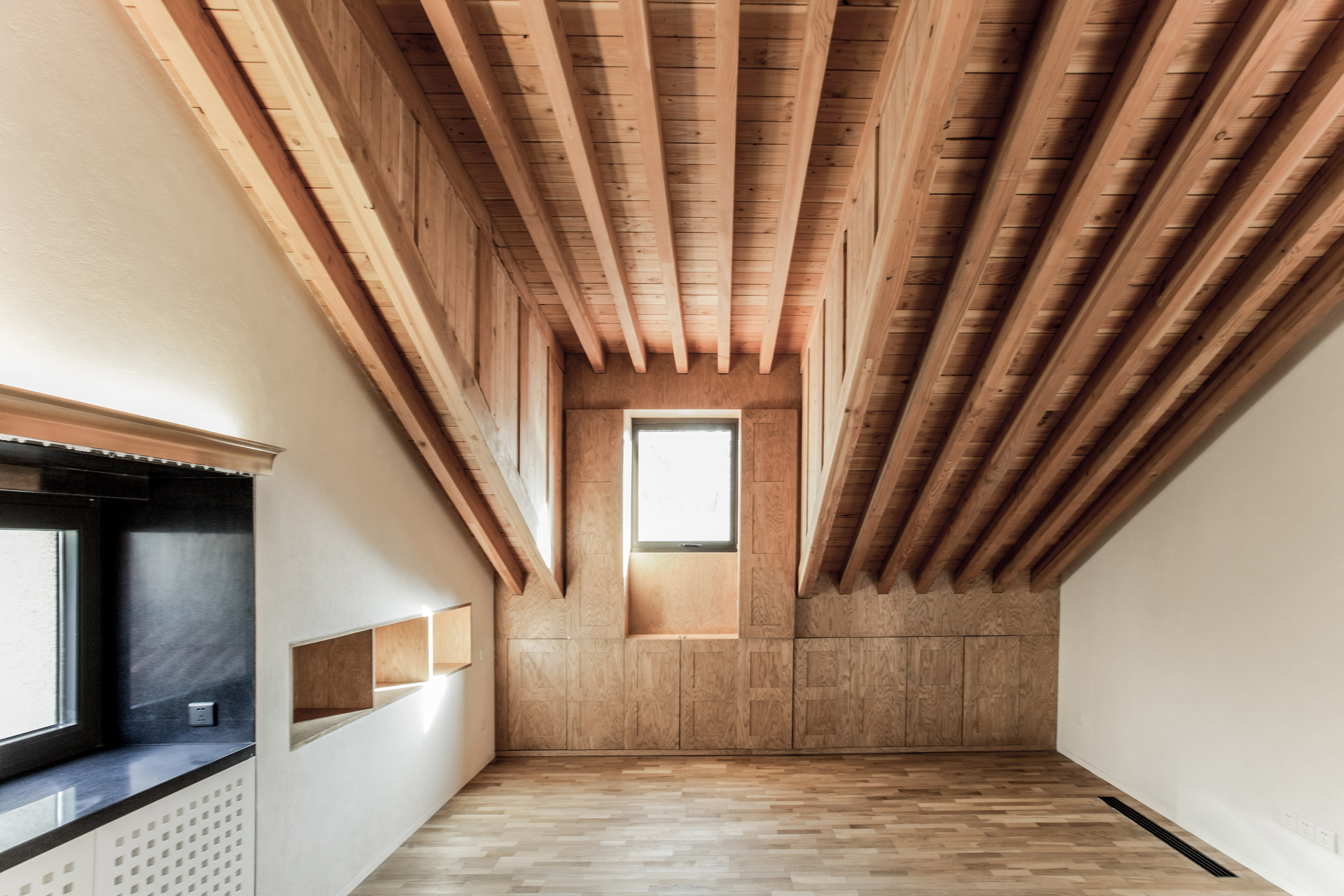 Atelier XÜK‘s renovation is informed by the building’s current state and context rather than attempting to return it to its original condition. This approach enabled the interior to be restructured to suit modern living.

The expansion of the attic provides the most visible intervention, with the materiality of the new addition juxtaposing strongly with the original gabled structure. 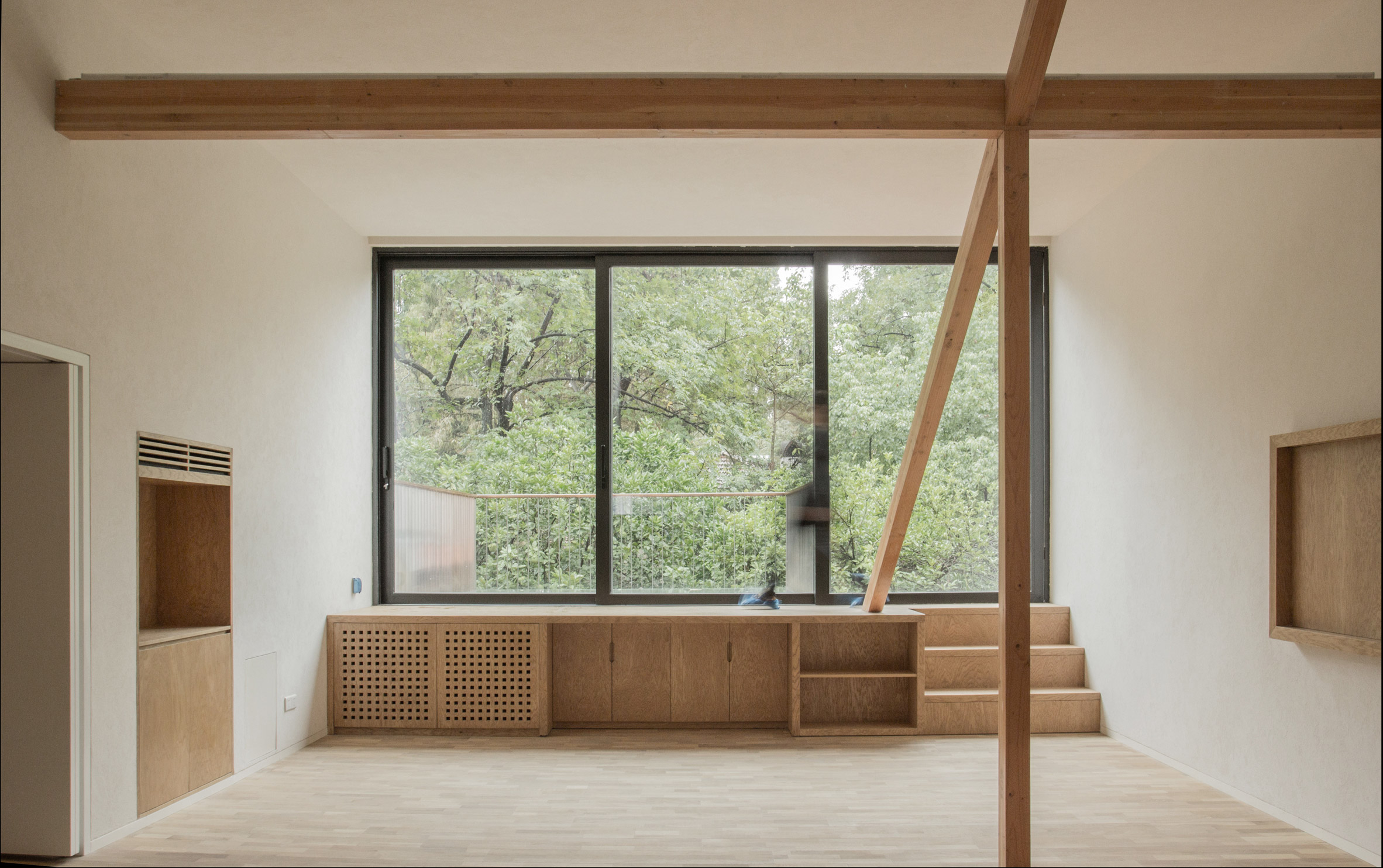 “In terms of the programme allocation, in order to relate to the diverse urban environment, we tried to stimulate the potential publicity of the attic space by opening-up the roof,” said the architects.

The new corrugated metal volume accommodates a studio and bedroom that open onto a terrace. The main living areas are located on the ground level, with other bedrooms and a sun room on the first floor. 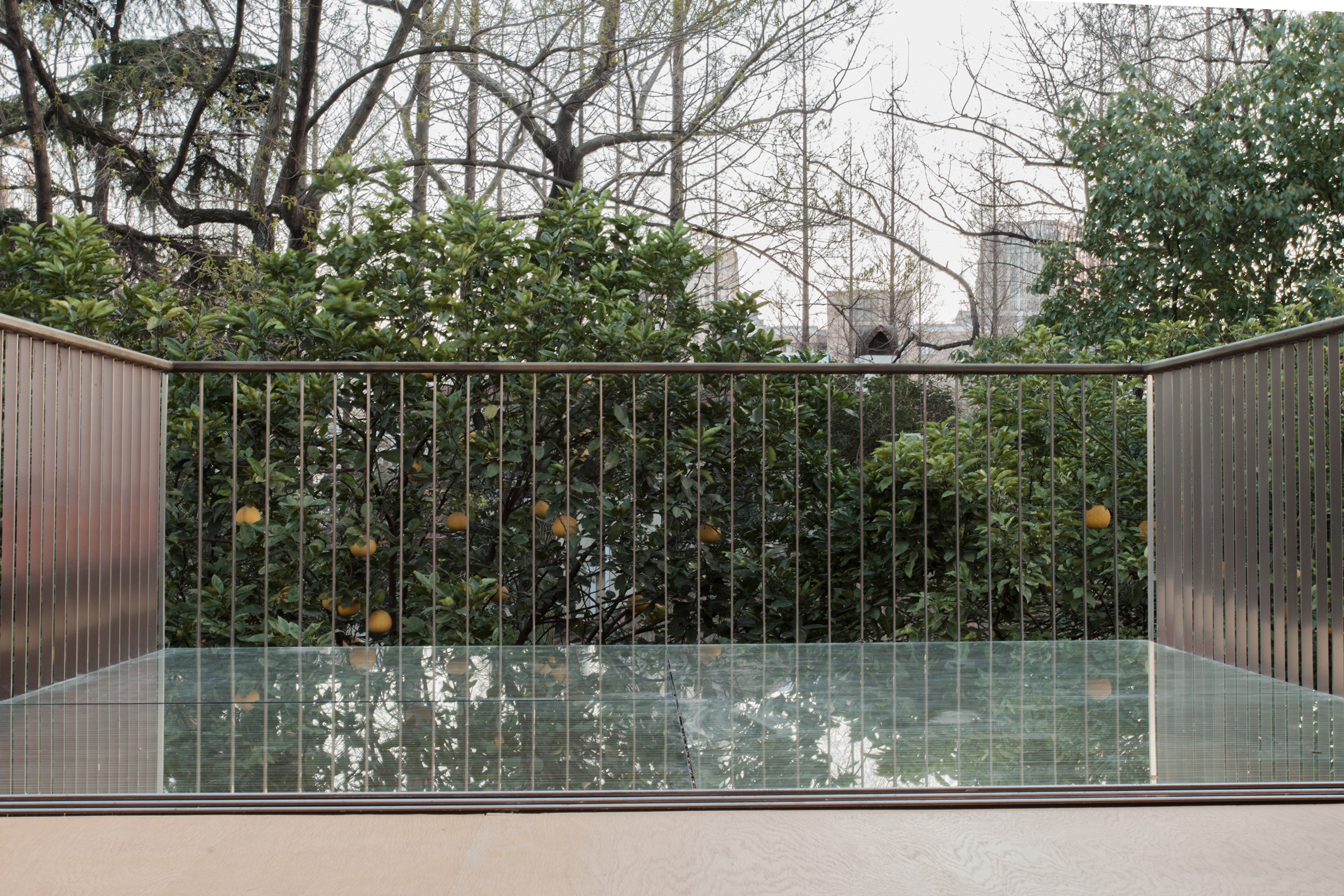 Internally, the reconfigured upper storey features contrasting material treatments that accentuate the differences in character between the old and new parts of the building.

“Only half the attic is opened, which creates a juxtaposition of two very different spaces: one warm, low, worldly space wrapped with wood contrasts with the other cold, high, abstract white spiritual space,” said the architects. 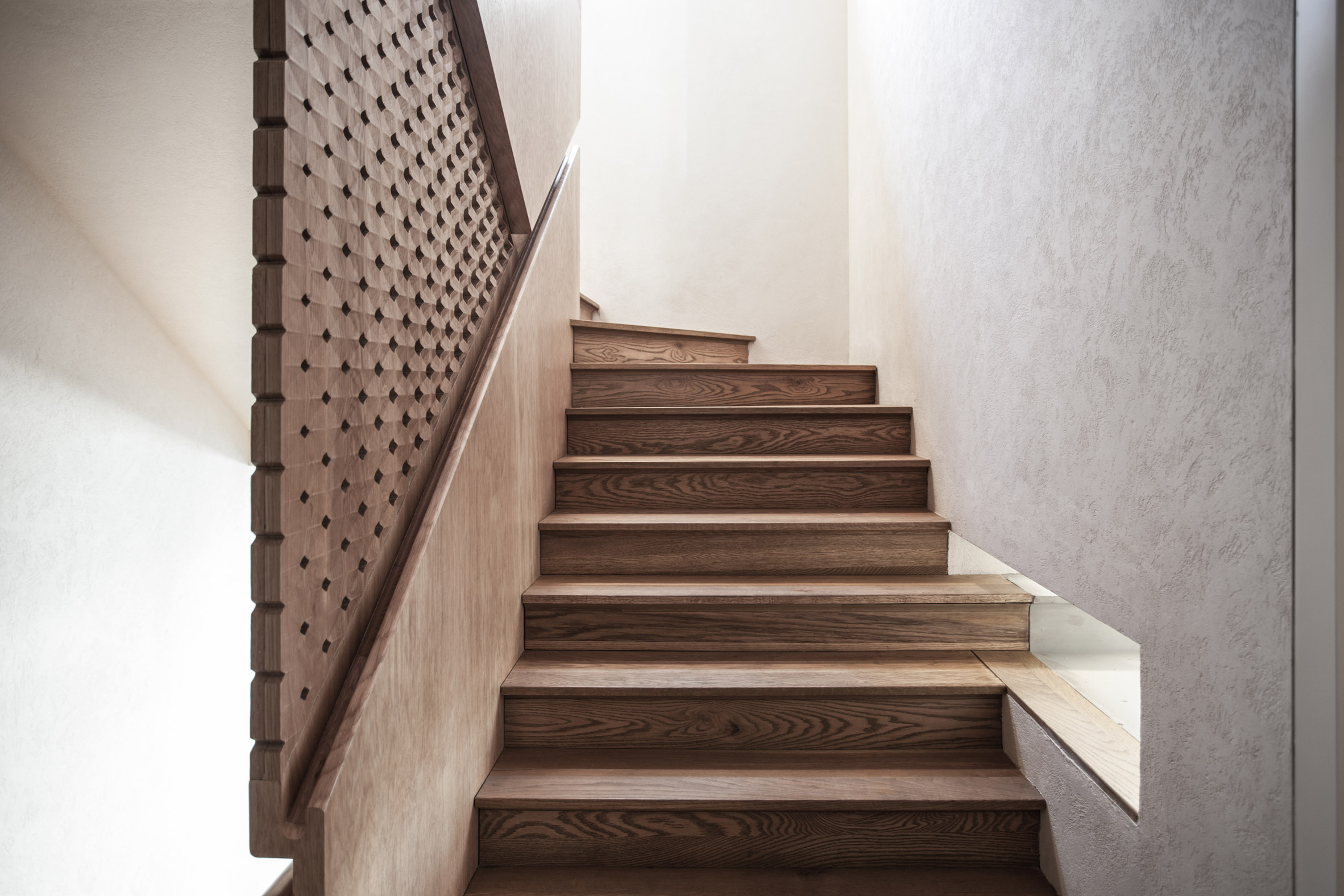 In the bright new studio, a timber framework incorporating an angled beam evokes the former roofline and connects the main floor with a stepped structure leading out onto the adjacent balcony.

A wooden staircase described by the architects as a “spatial installation” links the house’s three levels, beginning on the ground floor where the lowest treads extend into the living space. 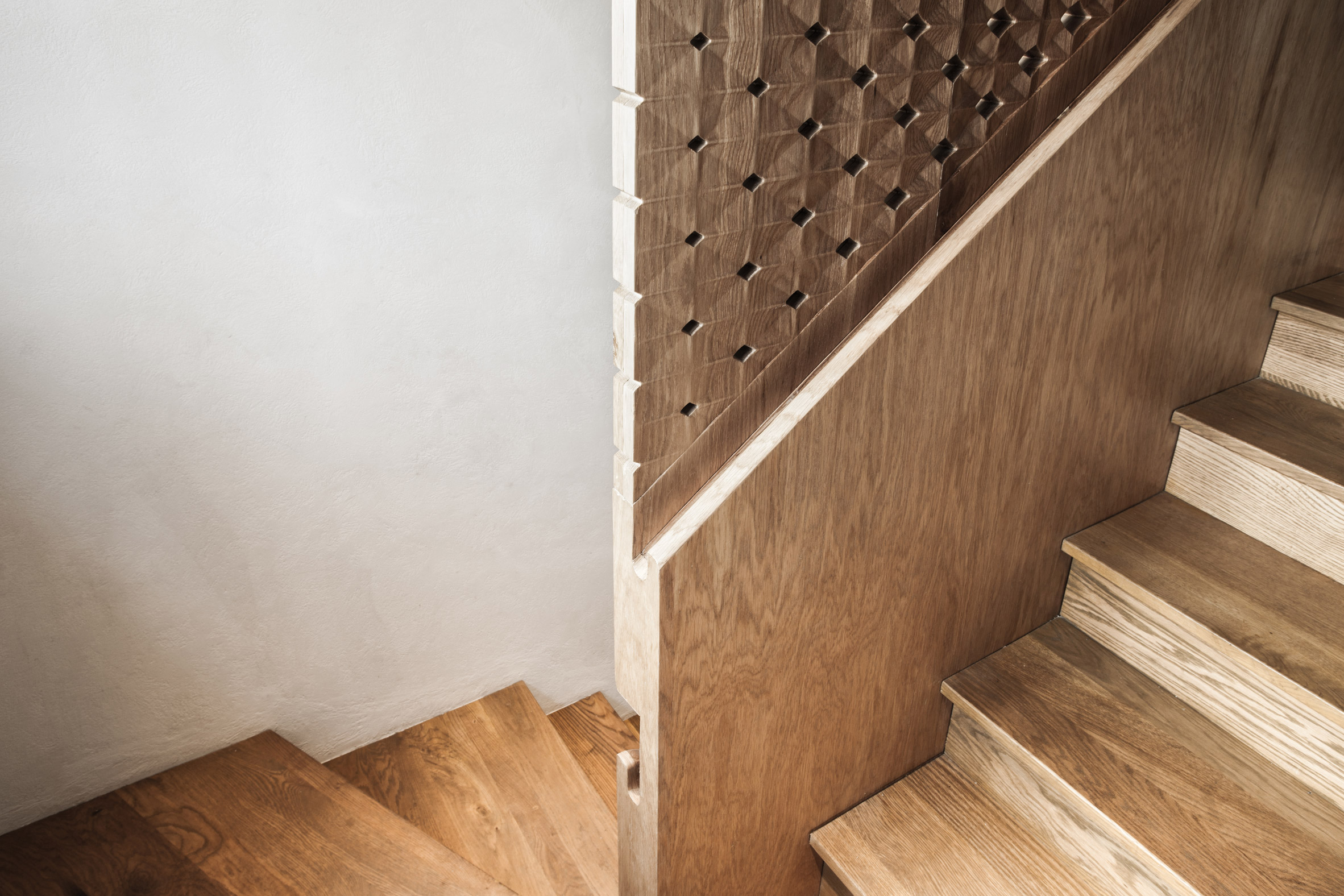 The staircase’s materiality and structure alters as it ascends in relation to the spaces around it. On the first floor, a narrow horizontal window at floor level provides a glimpse into a dressing room adjoining one of the bedrooms. 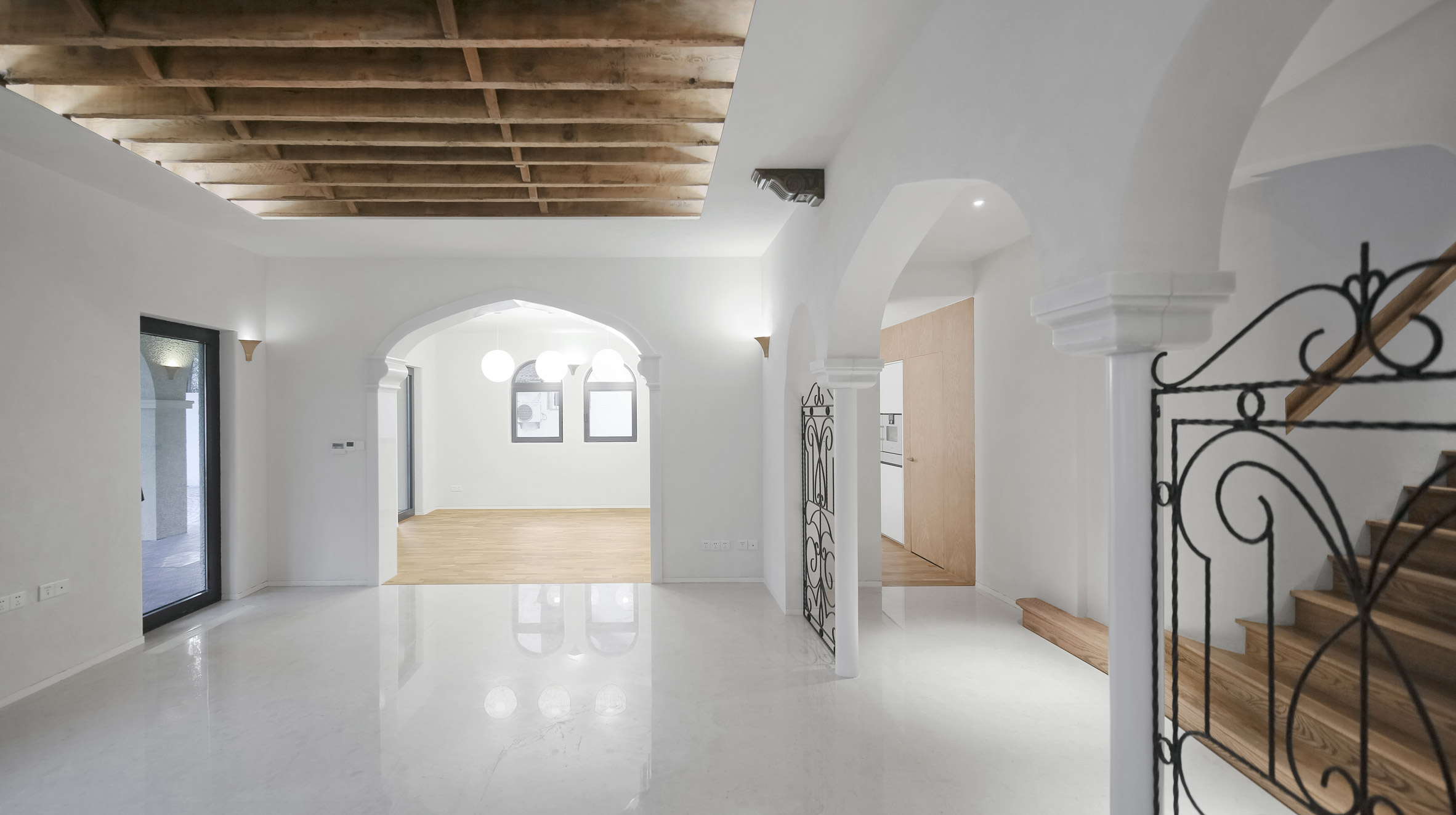 A wooden screen at the centre of the stairwell features a perforated pattern with holes that increase in size once past the level of a toilet that overlooks the circulation area through a full-height window. 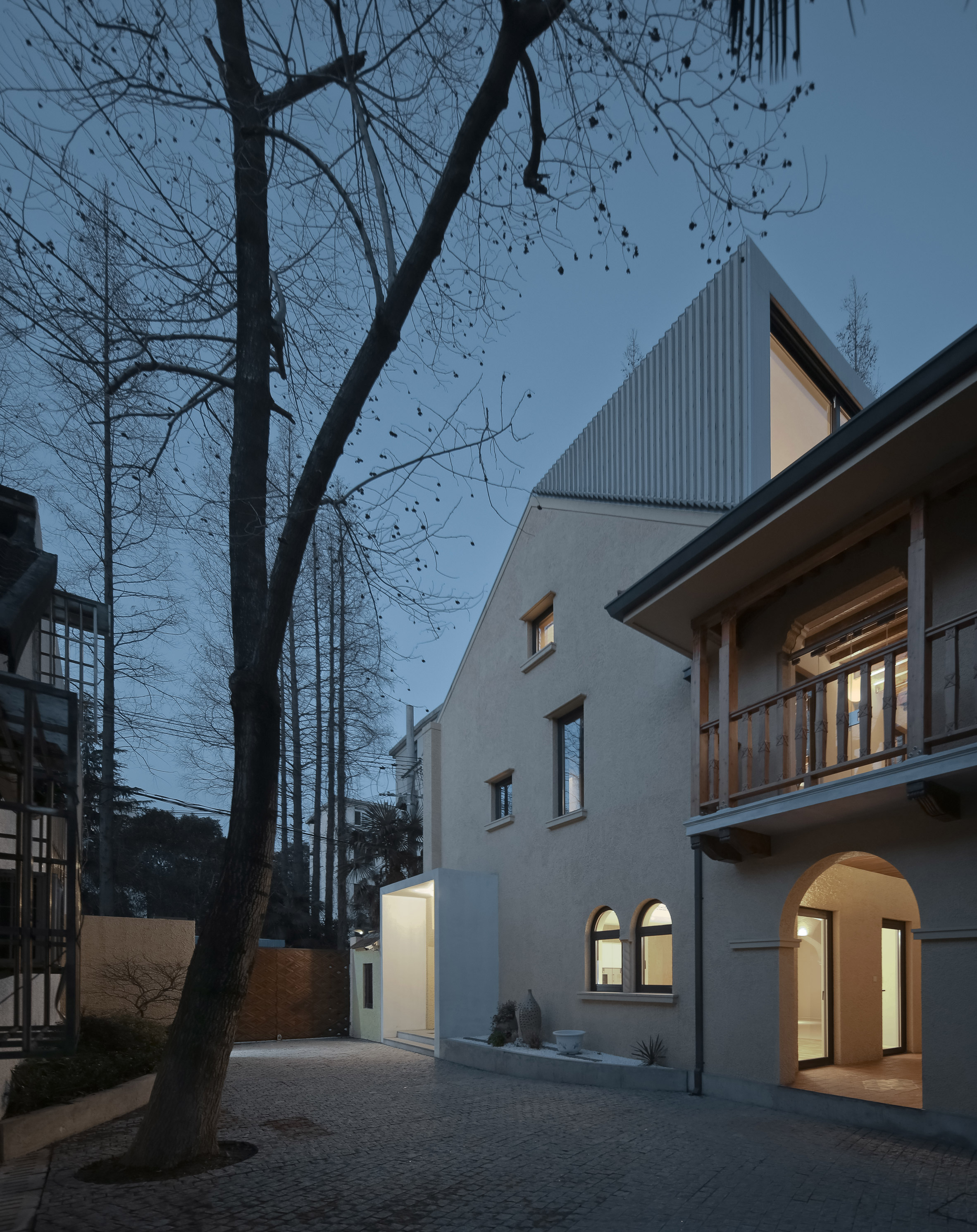 The property’s architectural legacy is most evident in the open living space on the ground floor, where Hudec’s Spanish colonial design is expressed in the arched openings and decorative ironwork gates. 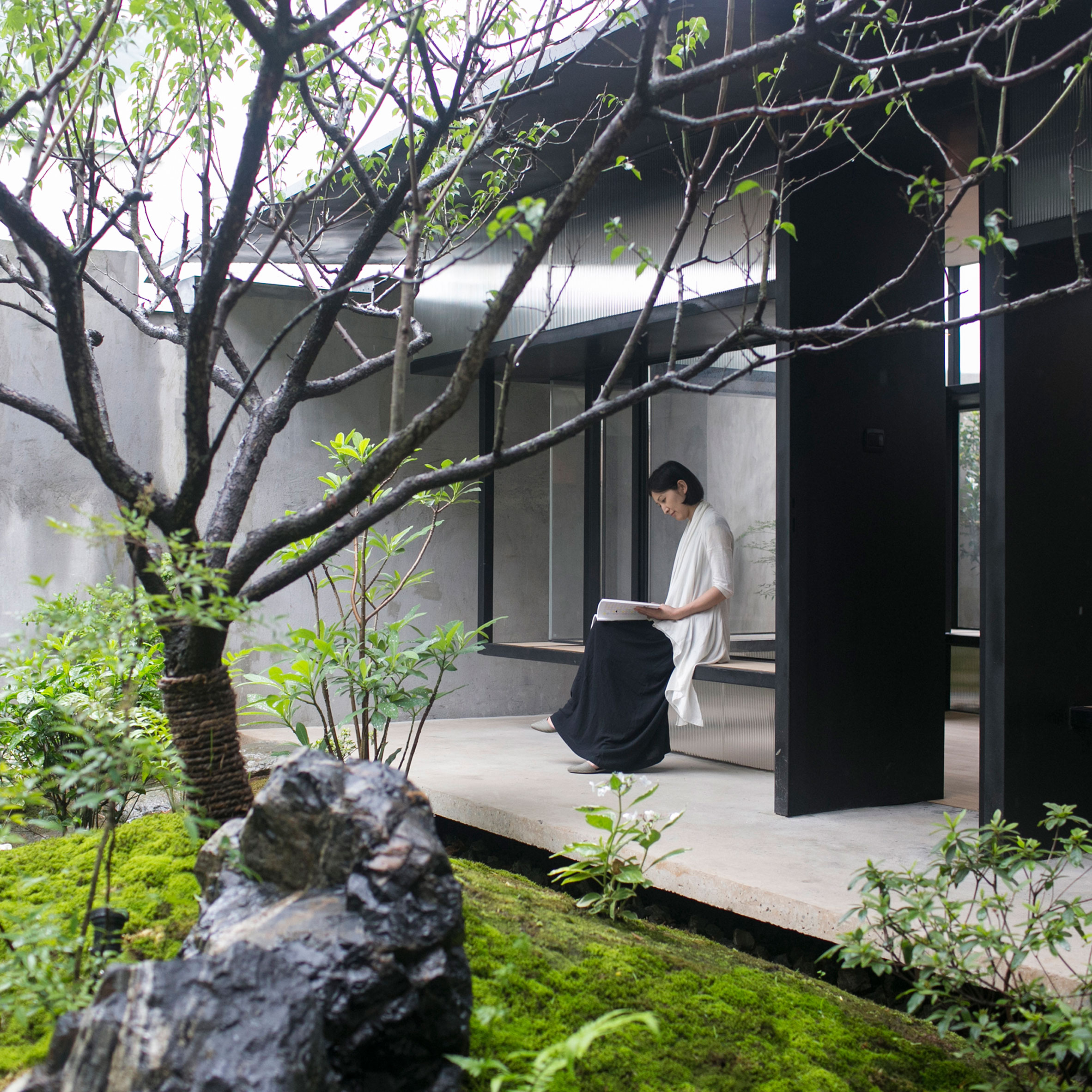 Photography is by ShengLiang Su.