New York studio Architecture Outfit made the most of a tight budget when transforming a dingy space into this bright Hawaiian restaurant in Lower Manhattan.

Humblefish was opened by the owner of a fast-food restaurant chain in Philadelphia, and serves poke: a Hawaiian raw fish dish that has gained popularity in New York and Los Angeles over the past year. 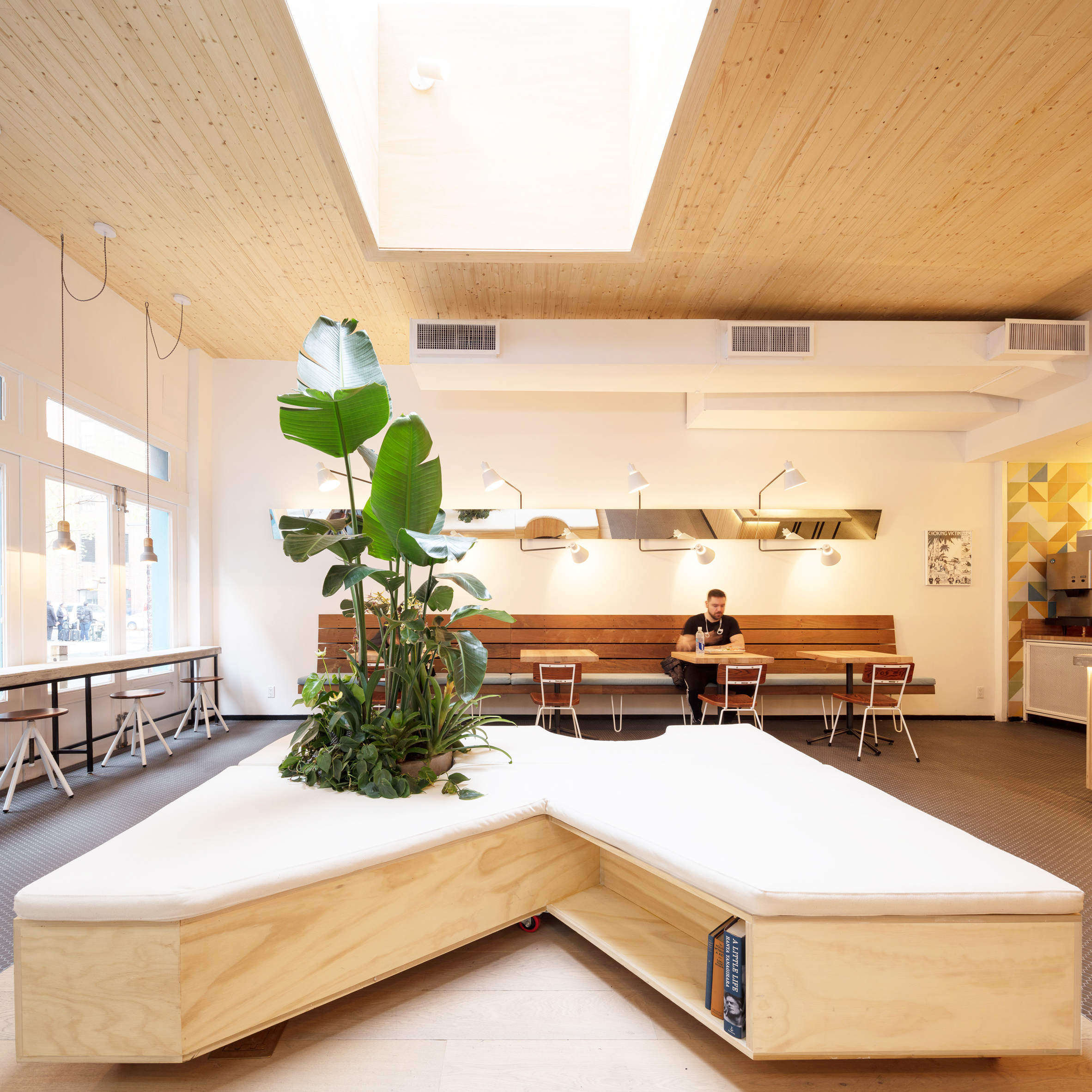 To bring more light into the space, the architects rebuilt the ceiling from light-coloured wood and left a hole in the centre. Costs for the project were kept down by sourcing items from low-cost retailer Home Depot.

“The space was a dark old bar,” Architecture Outfit partner Thaddeus Briner told Dezeen. “We stripped it bare, popped in a skylight, went to Home Depot, and built a ‘life raft’ in the middle to wait for their food.” 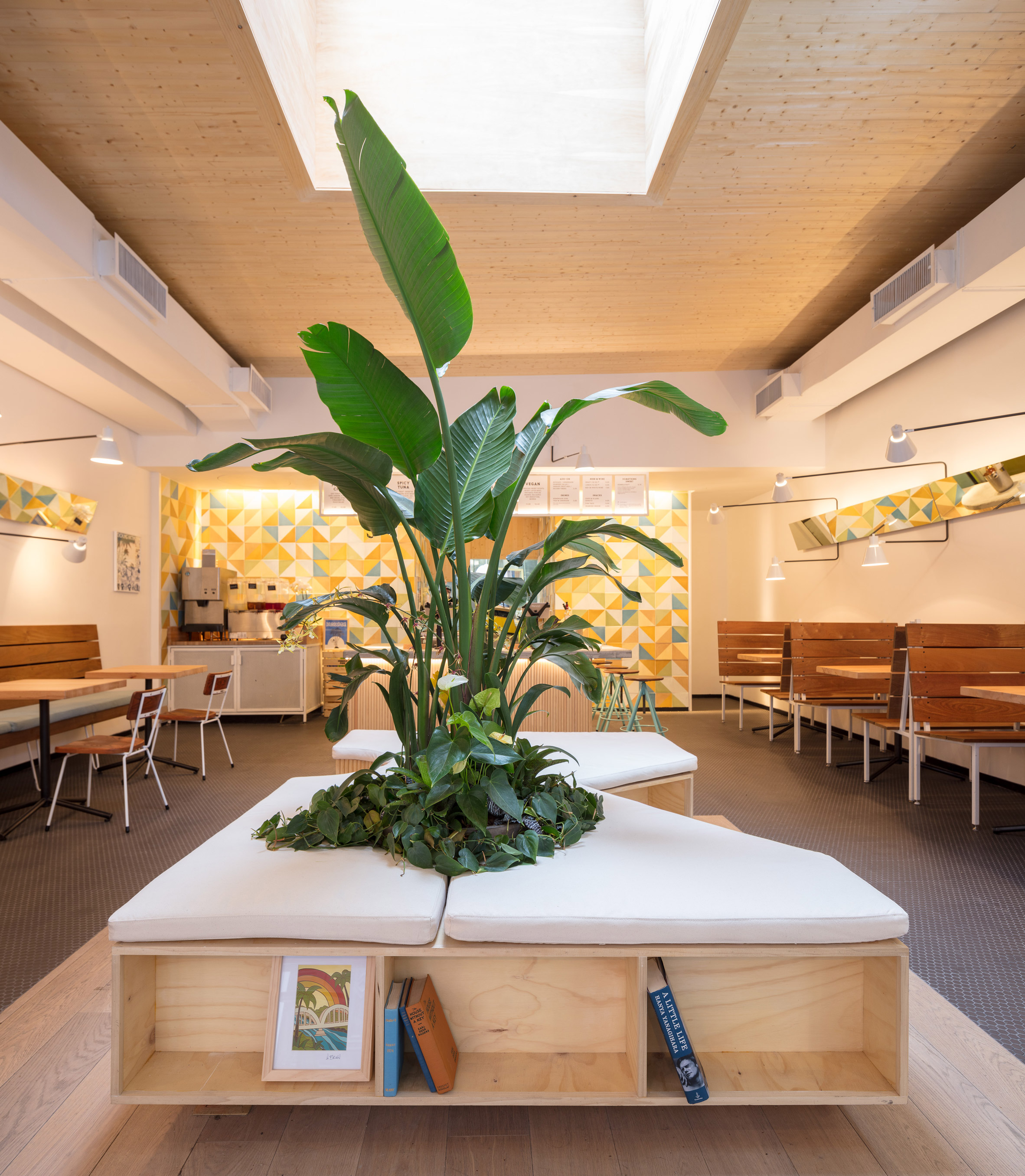 The “raft” is an irregularly shaped wooden furniture piece, which sits on casters and is topped by white cushions.

It also includes storage spaces for books in its base, and incorporates a pot for large tropical plants that sprout out of the seat. 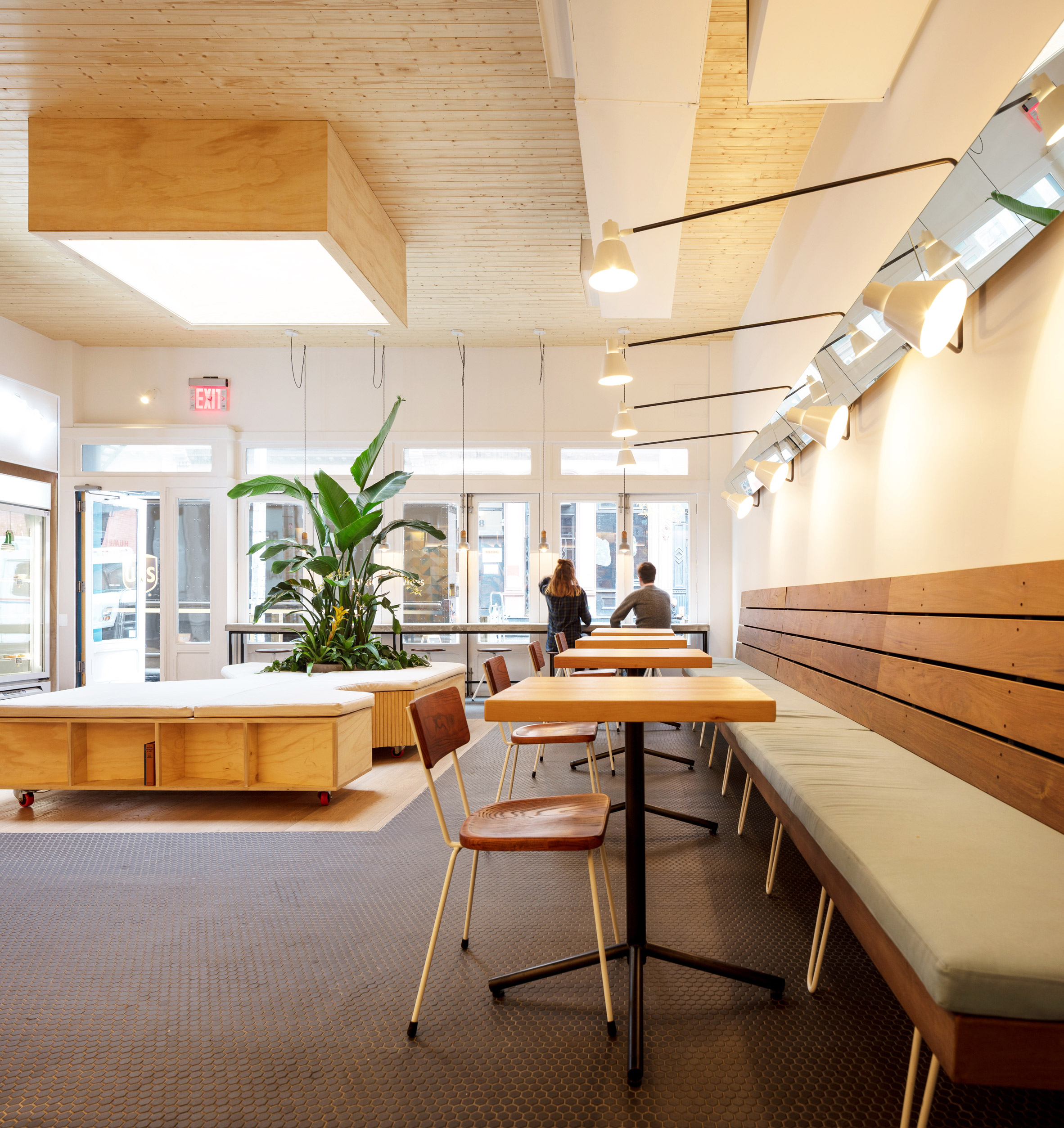 Other visual references to Hawaii include the bright hues used to cover the back walls behind the counter.

“We delved into Hawaiian colours and crafts, with just a bit of soft 1970s California Big Sur casualness thrown in,” said Briner, who founded Architecture Outfit with Marta Sanders in 2008. 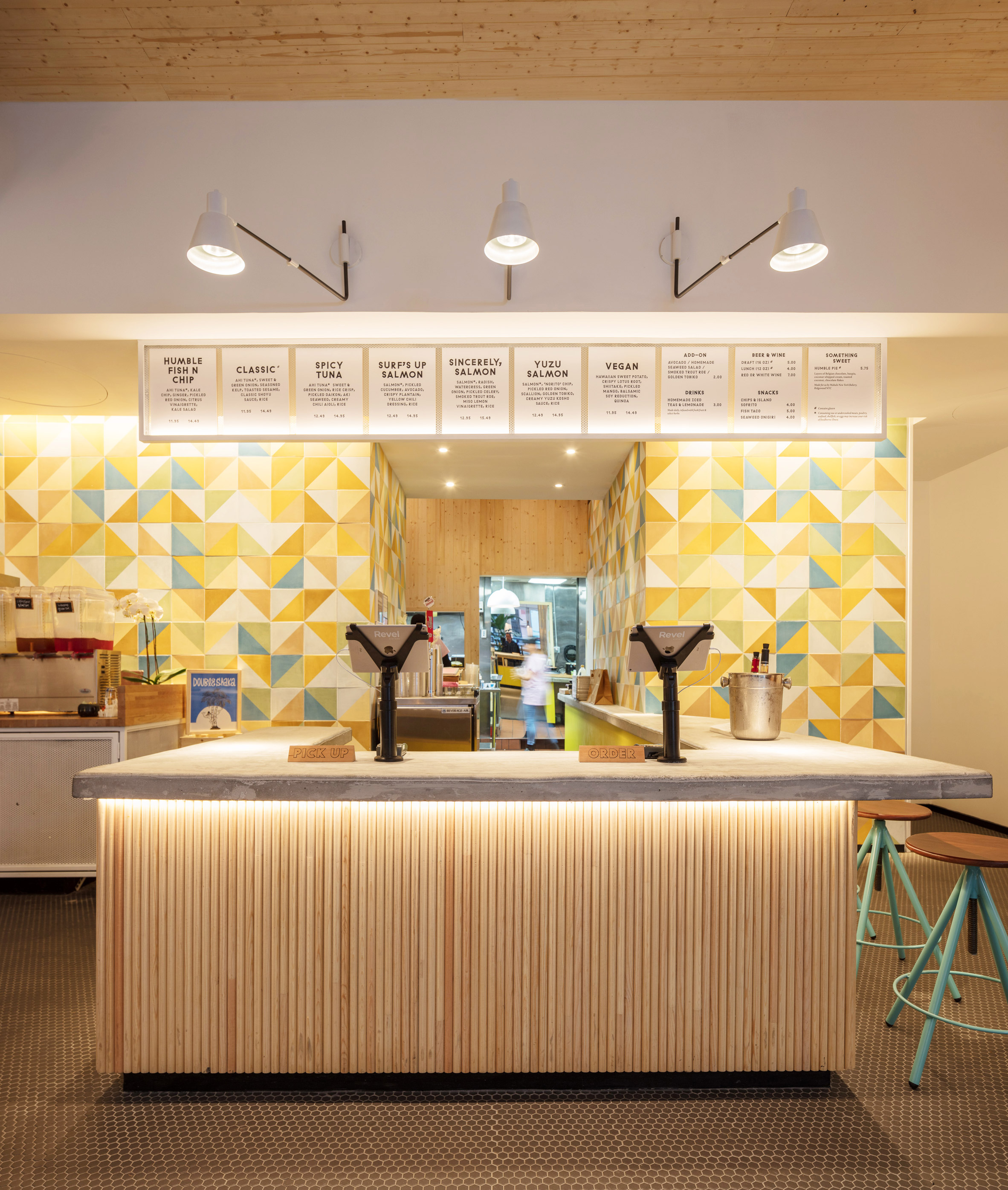 A banquette runs along one side and booths are tucked against the opposite wall. All have seat backs made from planks of wood, and are positioned under mirrors that reflect the colourful triangular patterns.

Additional seating is provided by stools behind the glazed Lispenard Street front, and at the service counter. 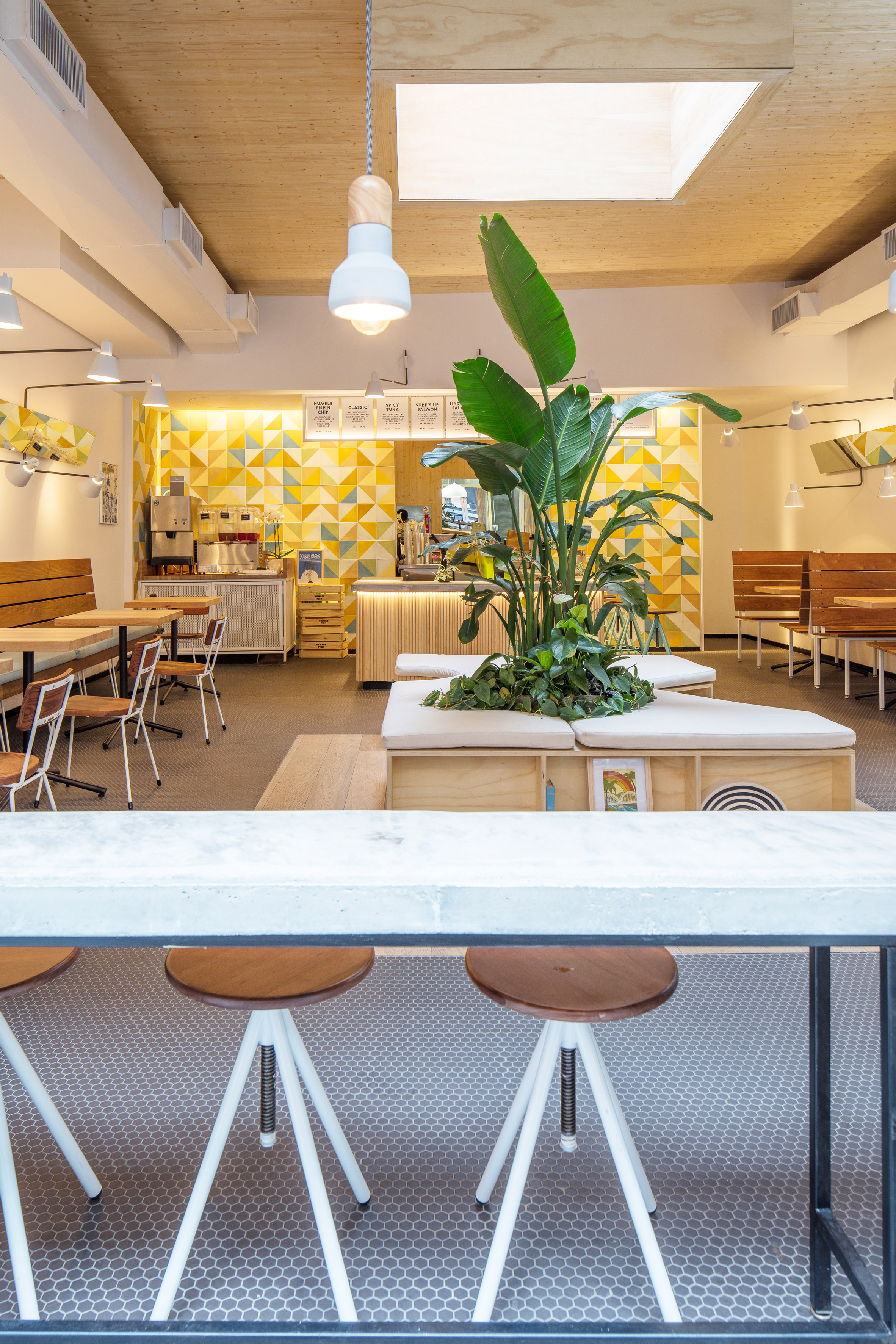 New York’s constantly evolving food scene also recently saw the opening of a restaurant and coffee bar inside the brutalist Met Breuer museum, while Philip Johnson’s renowned Four Seasons closed and had its furniture and tableware auctioned off last year.

Photography is by Michael Wells. 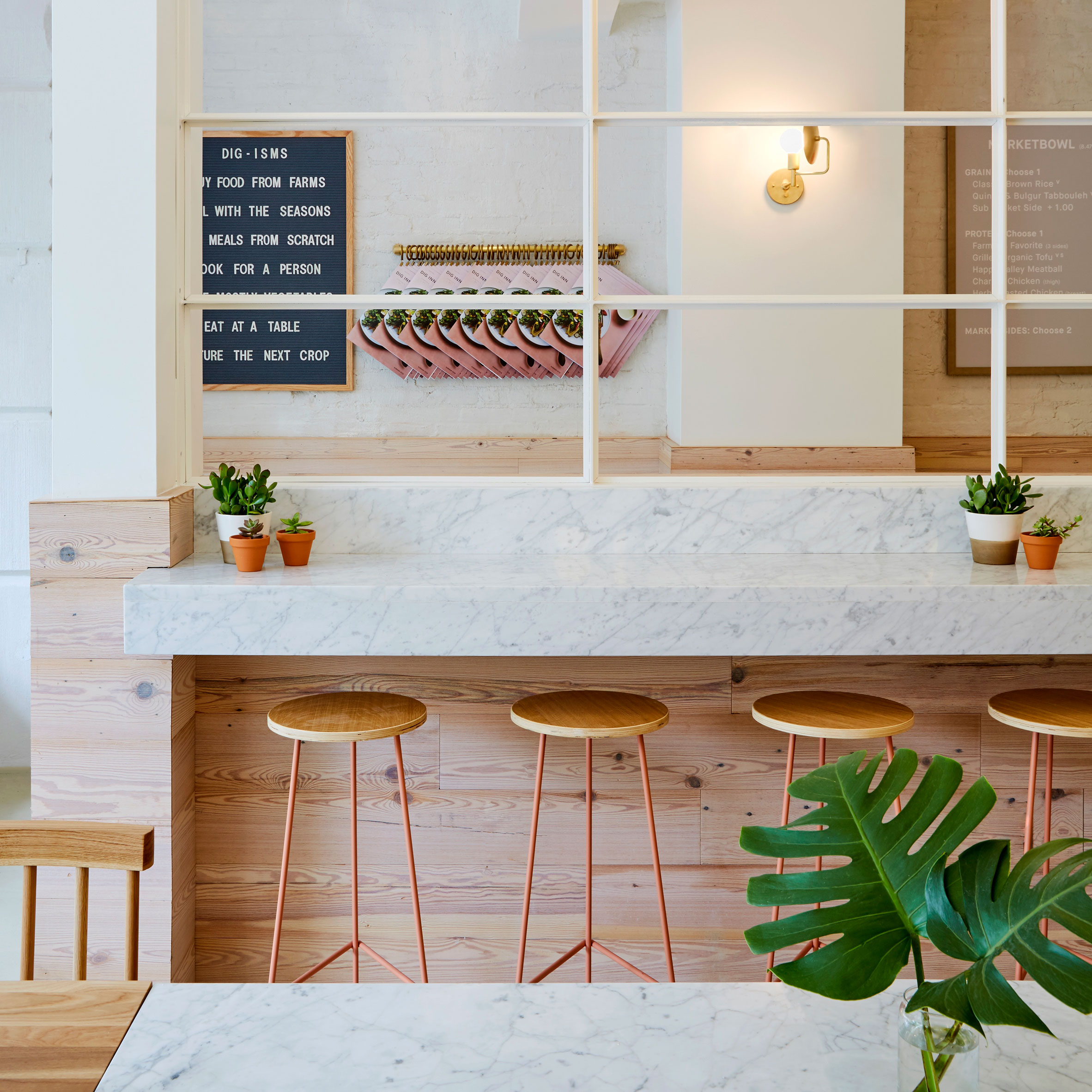