This Montreal residence by local architecture firm Architecture Microclimat has a front designed to fit in with the area’s style, while a more sculptural rear facade features an overhanging upper storey.

Architecture Microclimat built the First Avenue Residence for a young family, who had purchased the abandoned property in Rosemont – an old Montreal neighbourhood known for its green spaces and tight-knit community. 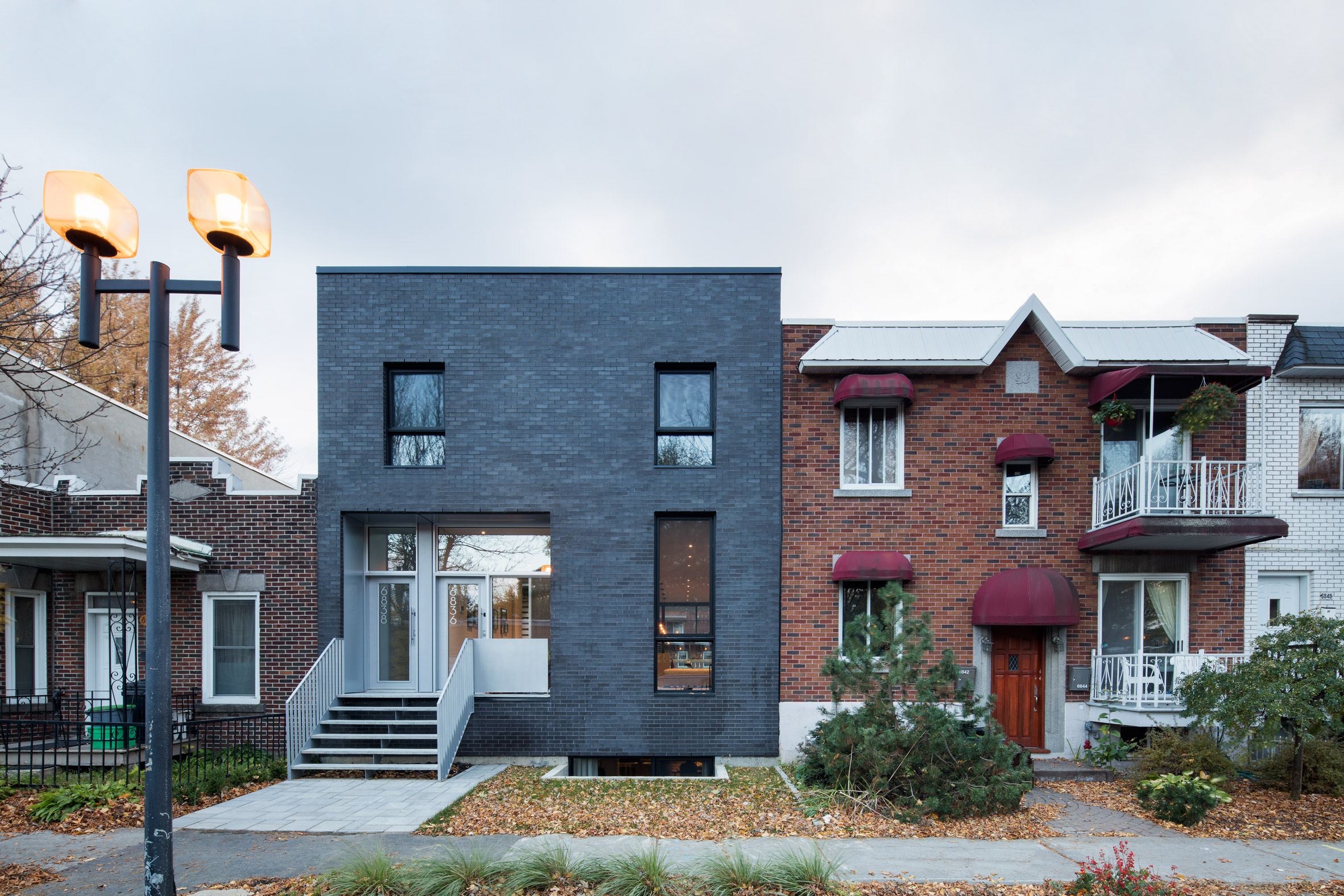 To create an understated presence within the historic area, the architects clad the entry facade in blue-grey brick.

Stairs from the street lead up to the slightly recessed threshold. Made of glass panes and light-coloured metal, the setback porch introduces the glazing and bright surfaces used across the rest of the residence. 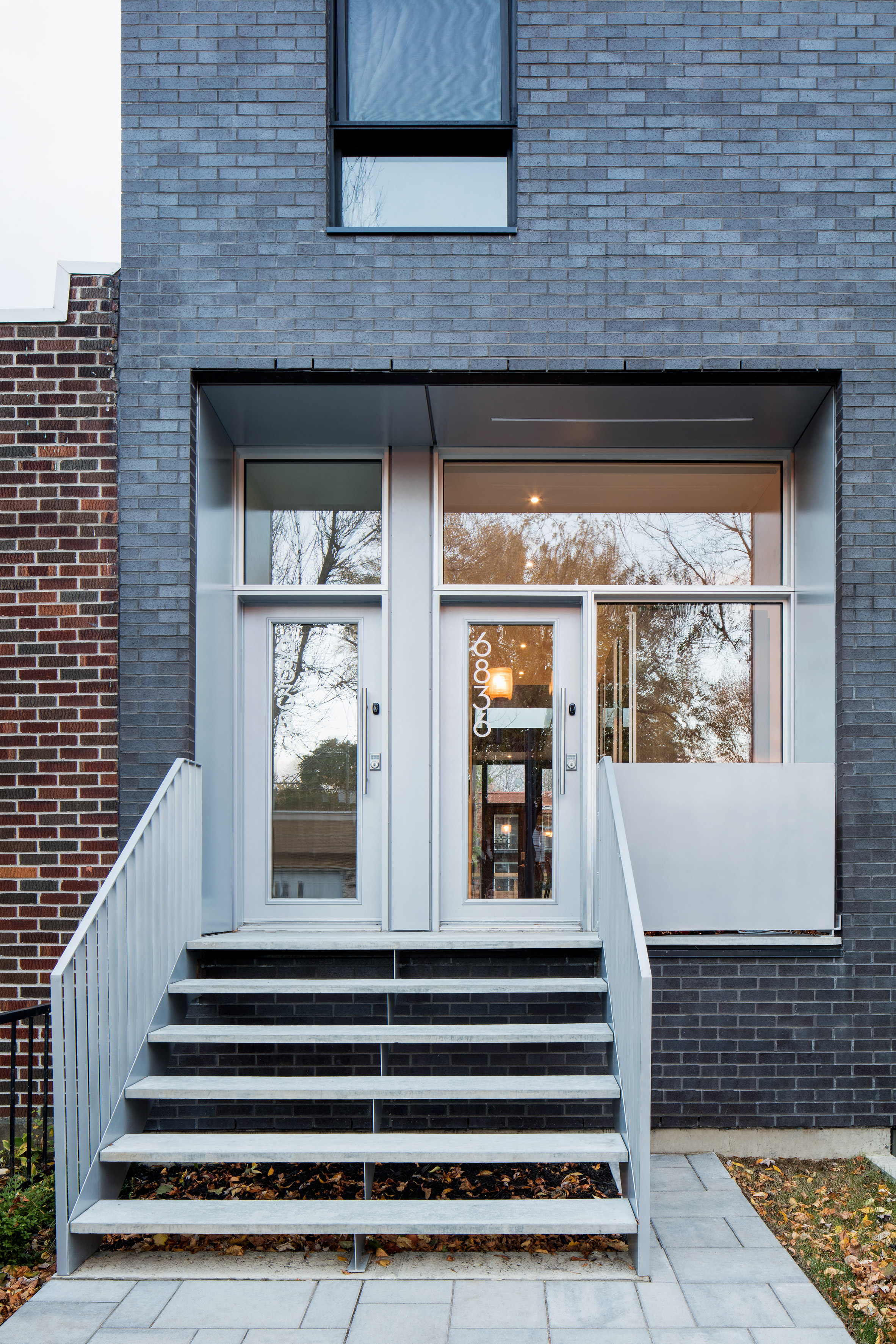 The entry opens onto a hallway, partitioned from an adjacent lounge by closets along the plan’s midline. The passage leads directly to a kitchen and dining space, where a row of floor-to-ceiling glass panes reveal a rear garden.

The white ceiling and walls, the counters striding the room’s east edge, and the polished concrete floors all pass through the glazing onto the rear porch. 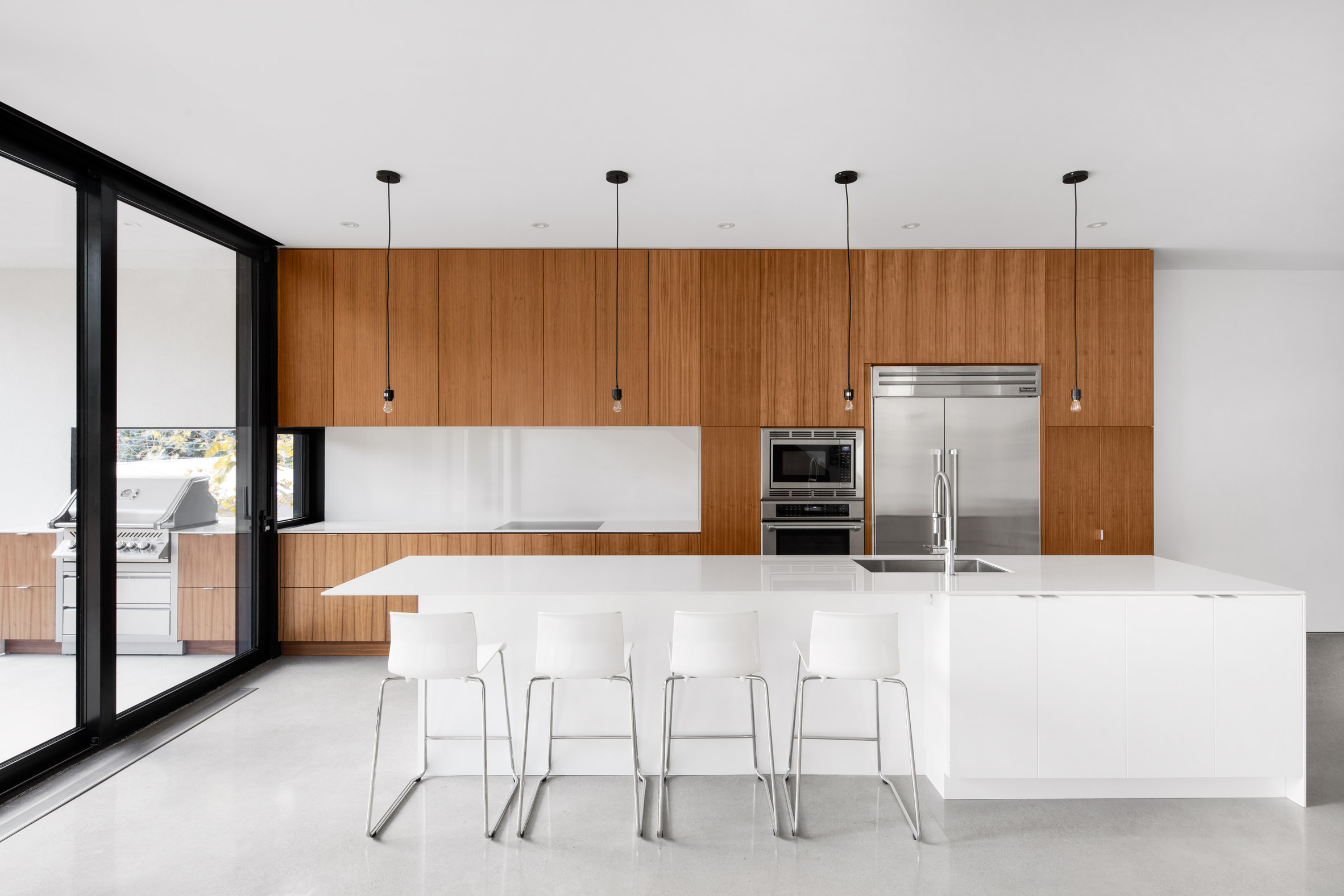 “As you step foot through the door, your eye is drawn to the back of the home, where the kitchen and living spaces extend outside thanks to impressive windows that frame the backyard,” the architects said.

“A kitchen counter naturally flows onto the terrace, visually and concretely uniting the two spaces.” 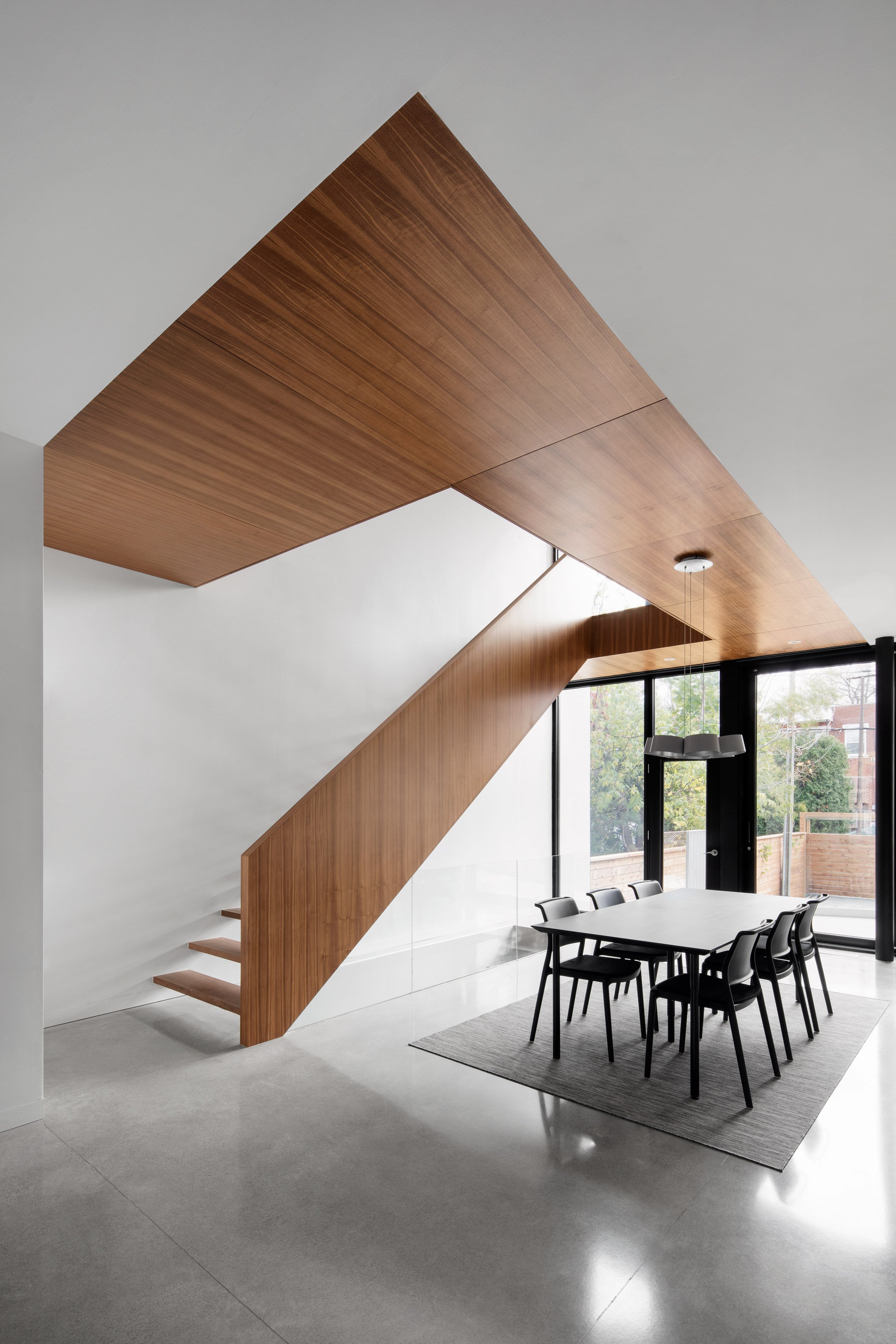 The architects cantilevered part of the second storey to provide shelter for the back terrace. The overhanging volume creates a sculptural contrast to the modest front facade.

The glazing along the south wall is set an an angle, creating a break from the otherwise rectilinear form and enhancing the facade’s faceted appearance. 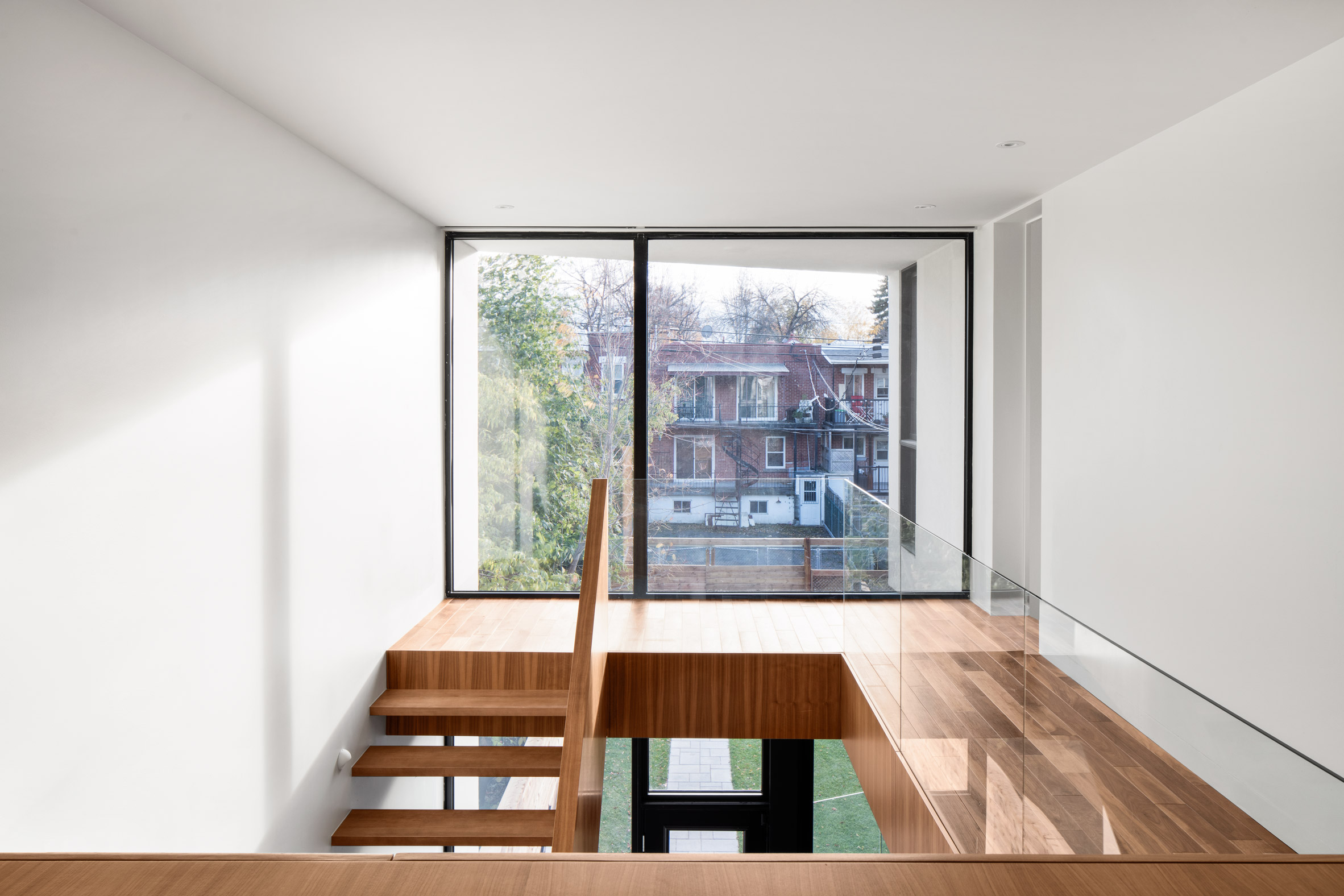 Inside the home, Architecture Microclimat supplemented the reflective white surfaces and concrete floors with mid-toned wood to “add warmth to the minimalist design”.

A wood-panelled staircase leads through a double-height space at the northwest corner. The firm intended the aperture to help enhance continuity between the two levels, as well as to help brighten the interior. 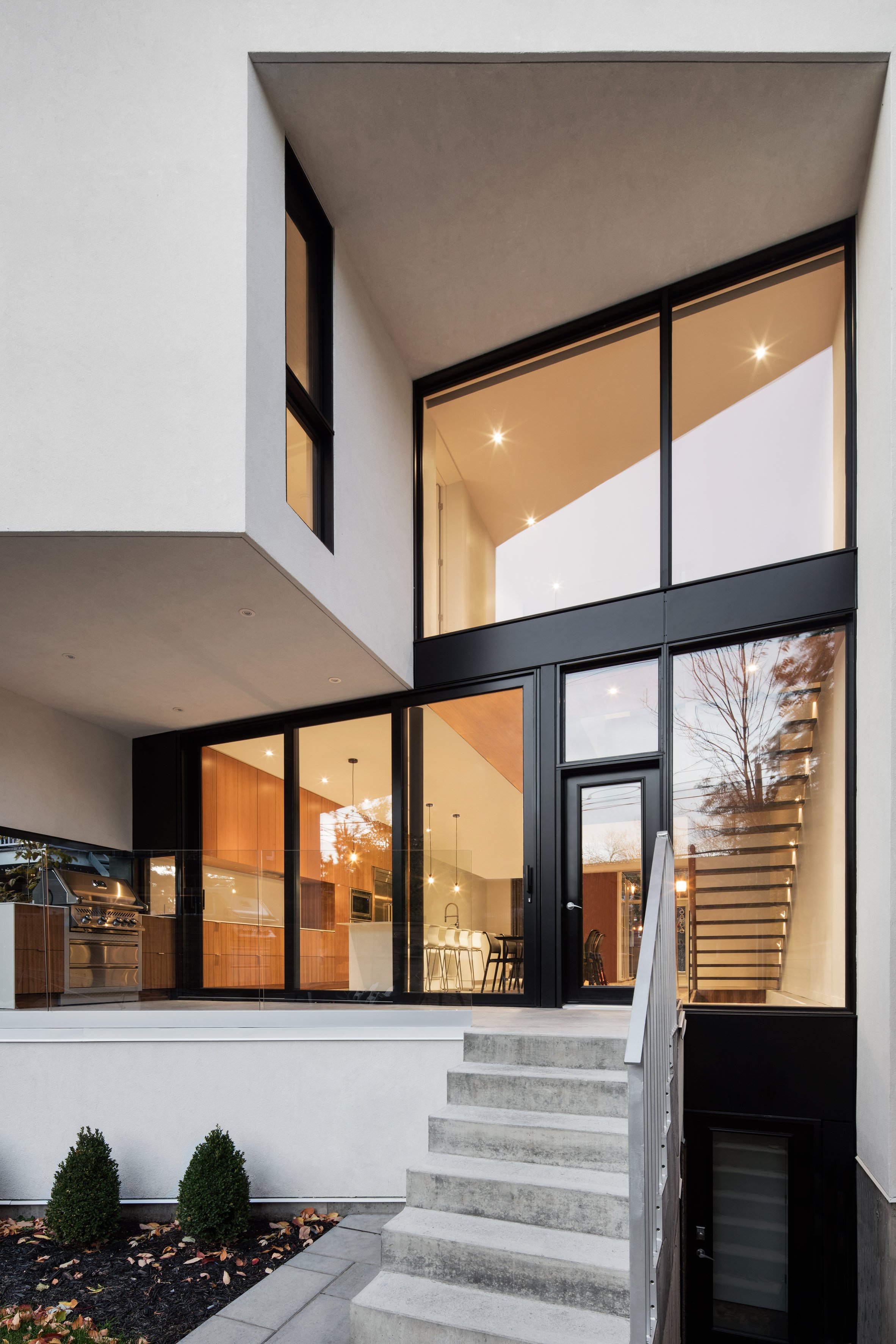 “The fluid transition from one space to the next continues throughout the home with a double height open space,” the firm said. “United by a central wooden stairway and glass railing, it invites even more natural light into the home.”

The home also features a basement level, which the architects designed as a rentable unit per the client’s request. 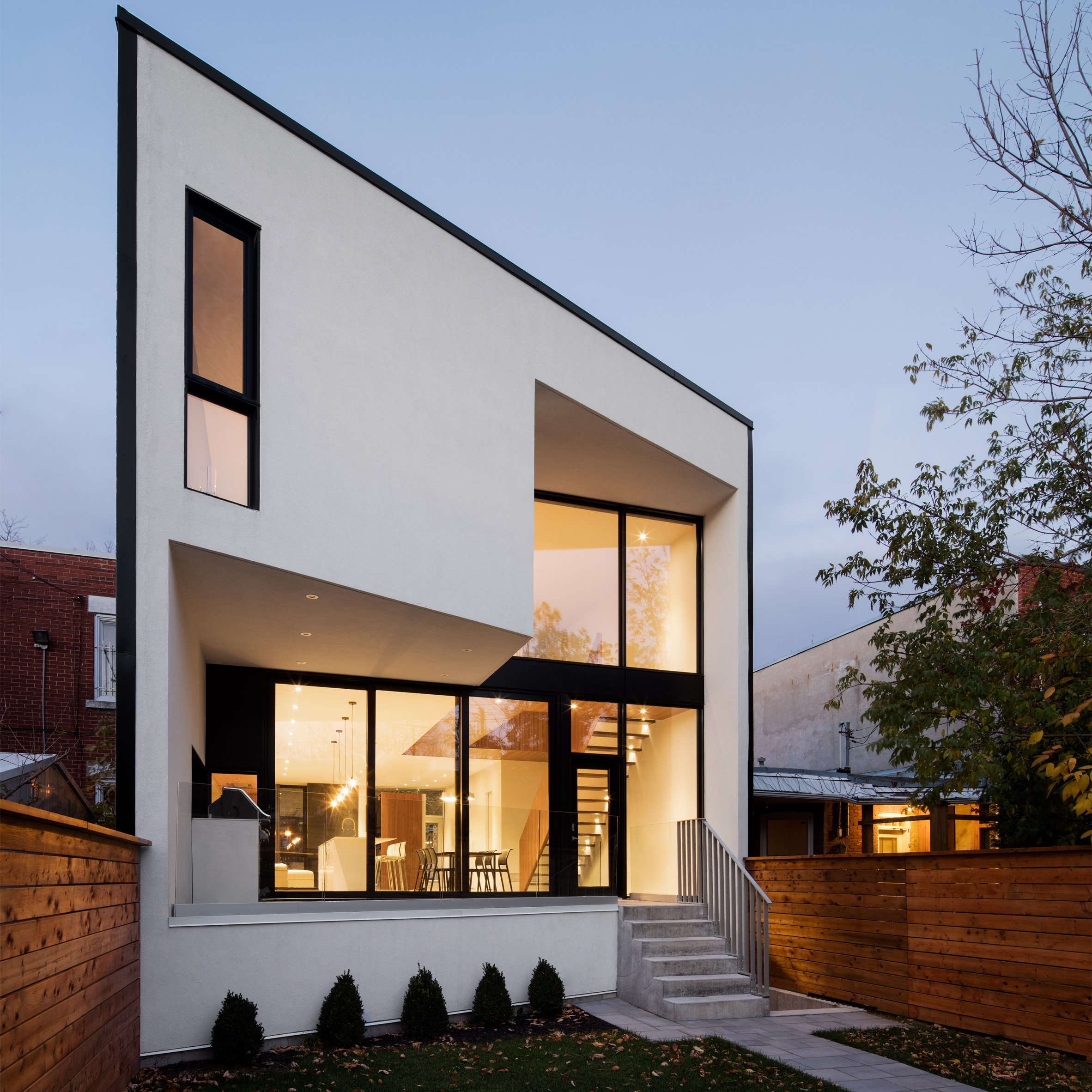 Entry to the underground apartment is situated on the front porch, adjacent to main home’s threshold. A light-well along the street-facing facade helps to provide natural light to the lower space, while a rear exit provides access to the garden.

Terraced homes are prominent among the old neighbourhoods of Montreal. Other recent similar projects include a house merged together from two flats, and a compact house featuring a split-level interior by La Shed.

Photography is by Adrien Williams. 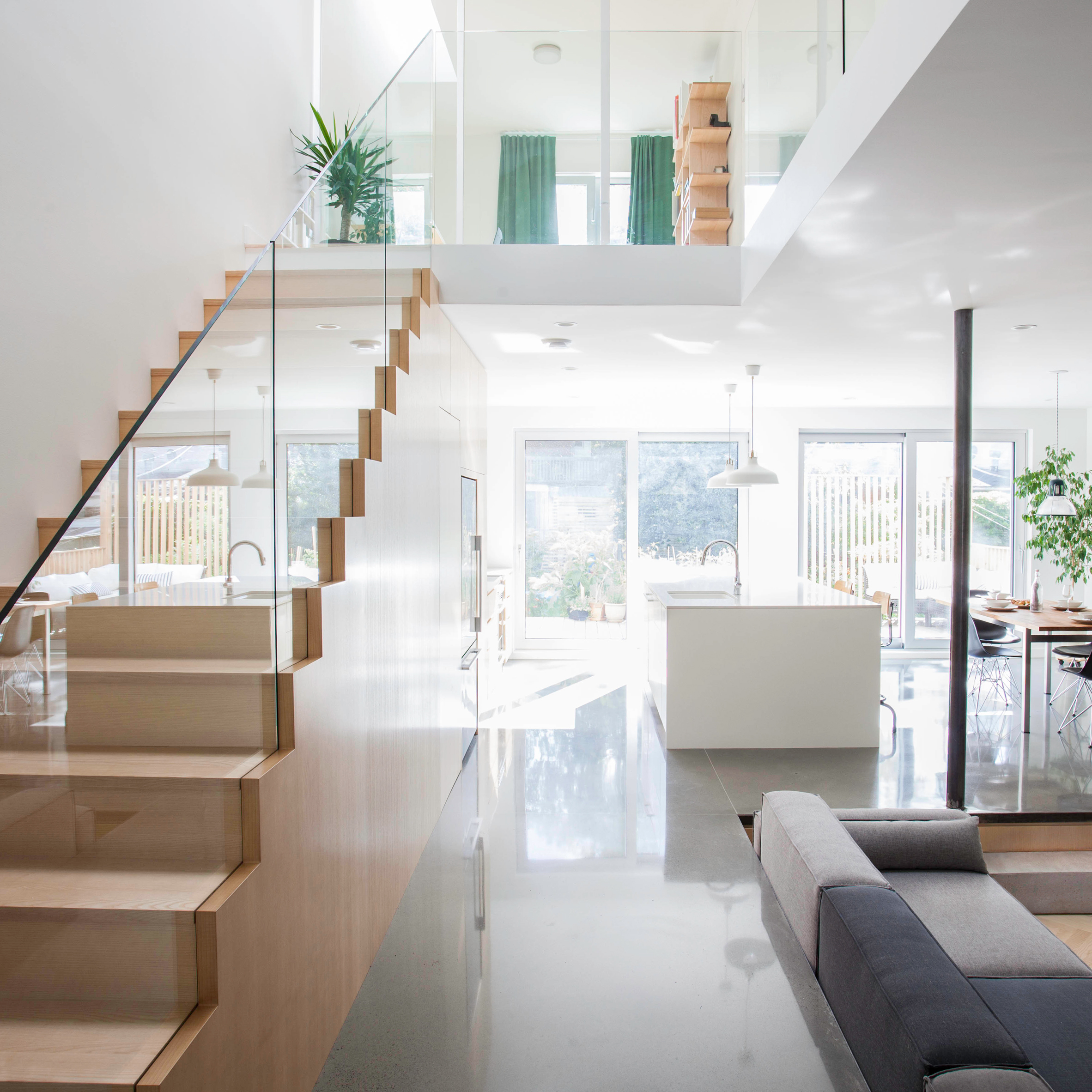