Mexican firm Sordo Madelano Arquitectos has stacked offset volumes that contain a hotel and office spaces to form a tower in Guadalajara.

Torre Américas 1500 is the first building to complete as part of a complex off Américas Avenue, one of the principle highways in Guadalajara – which is emerging as Mexico’s architecture hotspot. Though the components share a northeast facade, the architects set reinforced-concrete bases at different orientations – the bottom and third volumes have rectangular plans, while the second and fourth cuboids angle away at roughly seven degrees. In addition to marking the project’s different uses, the architects intended the variation to keep the structure’s stature from appearing monolithic.

“Two of the volumes are slightly offset, and exactly aligned on the rear face,” the firm said. “These gestures of displacement are designed to interrupt the robustness of the building and express an elegant sense of movement.” 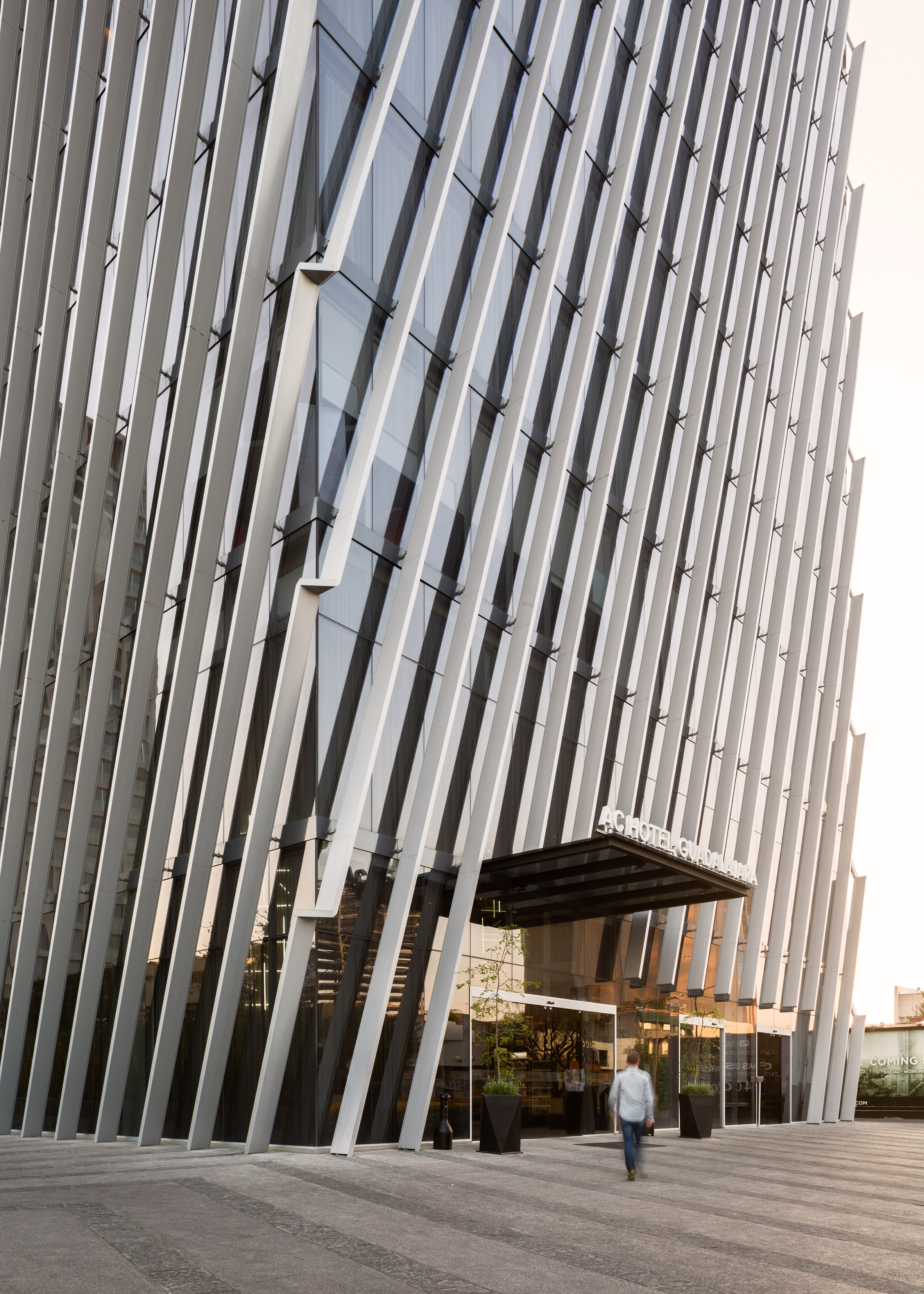 Slanted aluminium louvres wrap around the building’s facades to help maintain visual unity, but swap diagonal direction at the intersection of each volumes.

“As a response to its urban context, adjacent to one of the city’s most significant urban highways, Americas Avenue, the building presents a facade resembling a double skin, enveloping it for its protection,” said the architects. 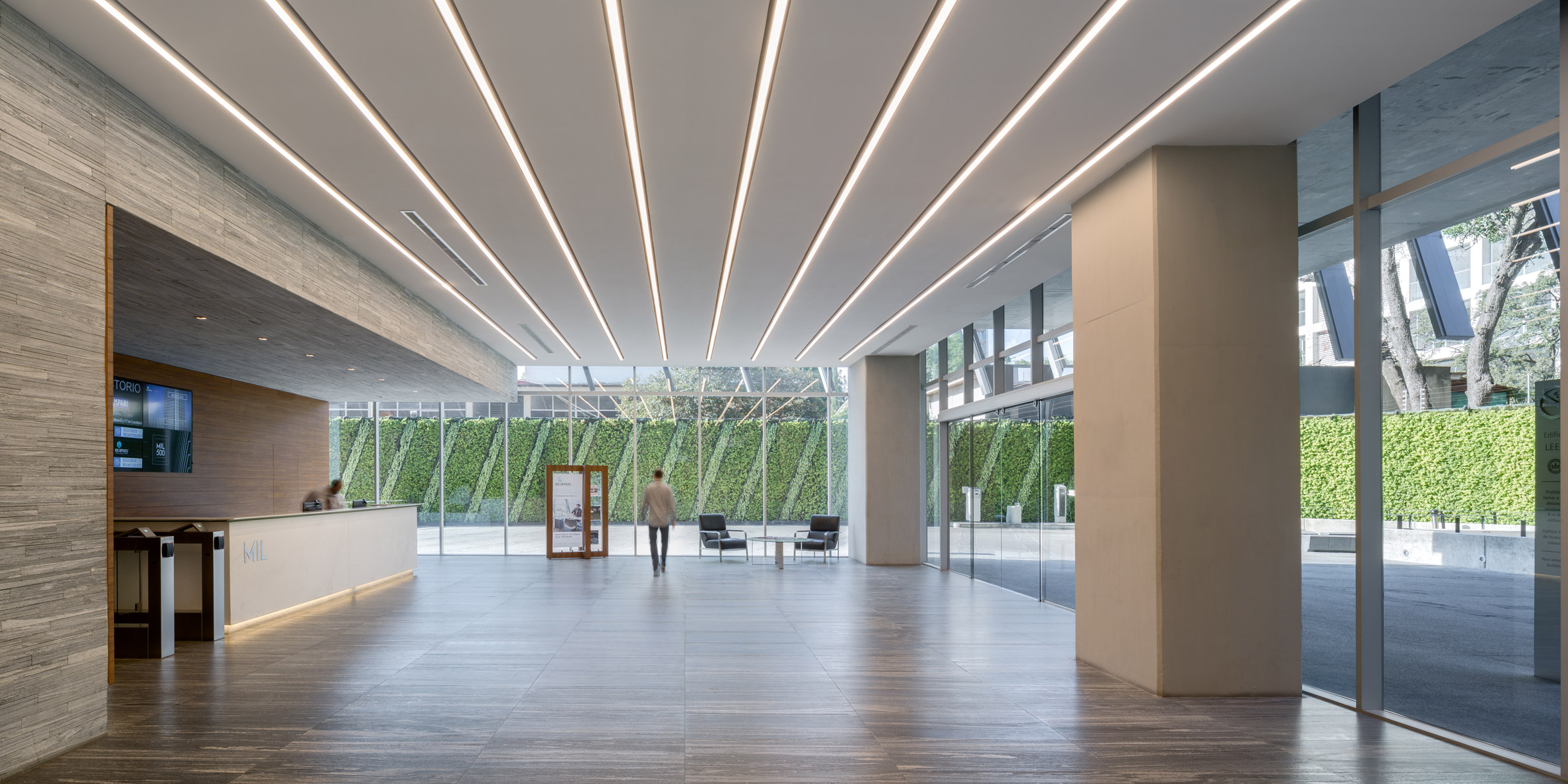 On the building’s ground floor, a double-height plaza features limestone floors that “continue the geometry of the facade across the ground”.

The public lobby is followed by a level allocated for amenities, with a hotel taking up seven floors above. Office spaces occupy the three upper cuboids. As the volume above the hotel overlaps the roof at a slant, a chevron-shaped area is left exposed. The architects inserted a pool into the space, offering sweeping views of the surrounding city.

Double-glazing and the aluminium framing both help to prevent solar glare and overheating. 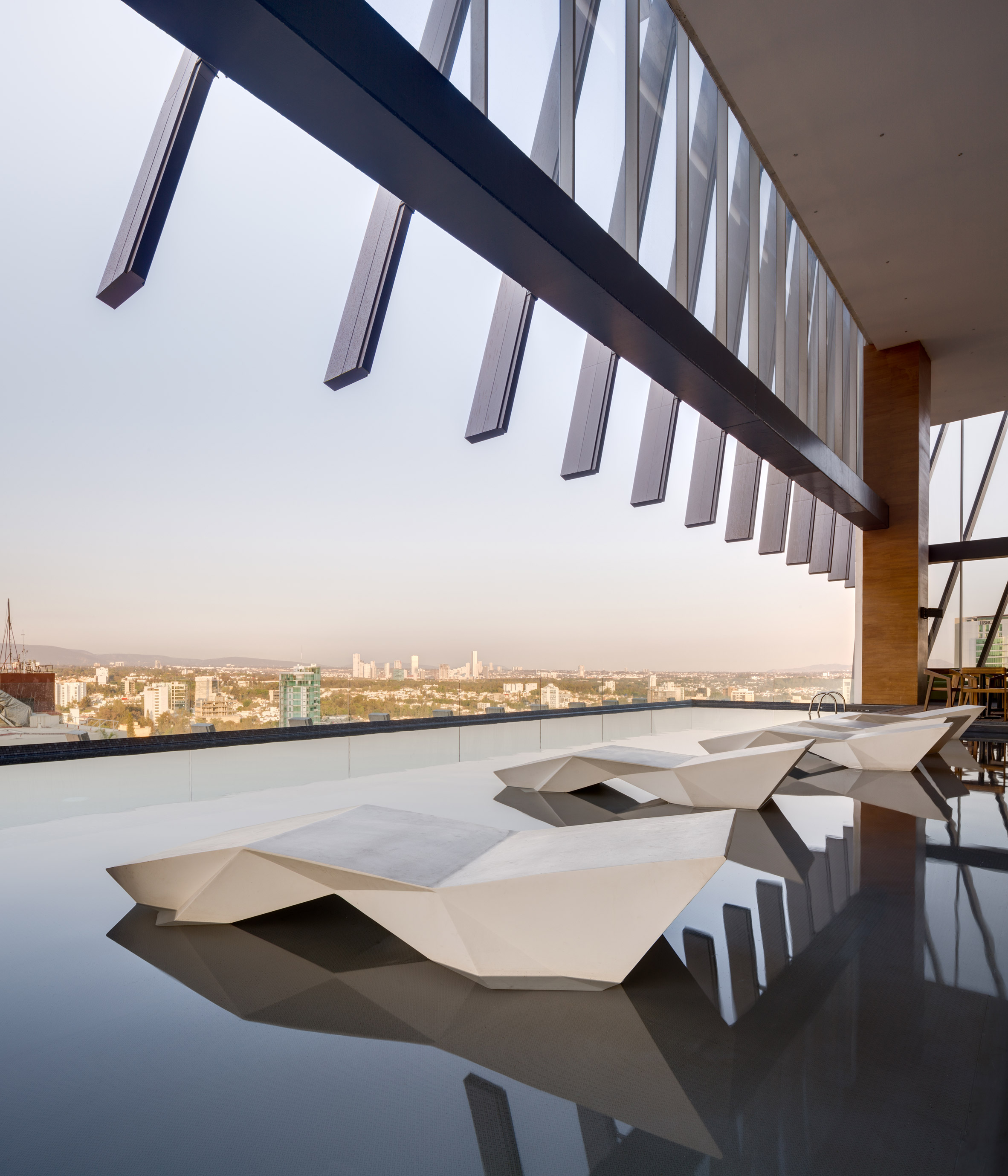 “The solar gain the building will receive on three of its four sides was one of the most significant design challenges,” Sordo Madelano Arquitectos said. “For this reason, the faces respond to this need with recessed aluminium framing, in the style of a curtain wall, specifically designed at the correct angle to create shadows and avoid excessive solar gain.”

“On top of this, the building uses double glazing, offering a high degree of solar protection,” they added. Several towers elsewhere in Mexico have modified facades to offset their imposing appearances, including the tallest skyscraper in the capital, and the Mexico City bank headquarters designed by a collaboration between Legorreta and Rogers.

Photography is by Rafael Gamo.