Tasked with renovating and extending the Stapleton branch of the New York Library, Andrew Berman Architects overhauled the interior and connected it to an annex clad with zinc and glass.

The facility is situated in northeast Staten Island – one of the five boroughs that make up New York City – and was first constructed in 1909 as the Carnegie Library. 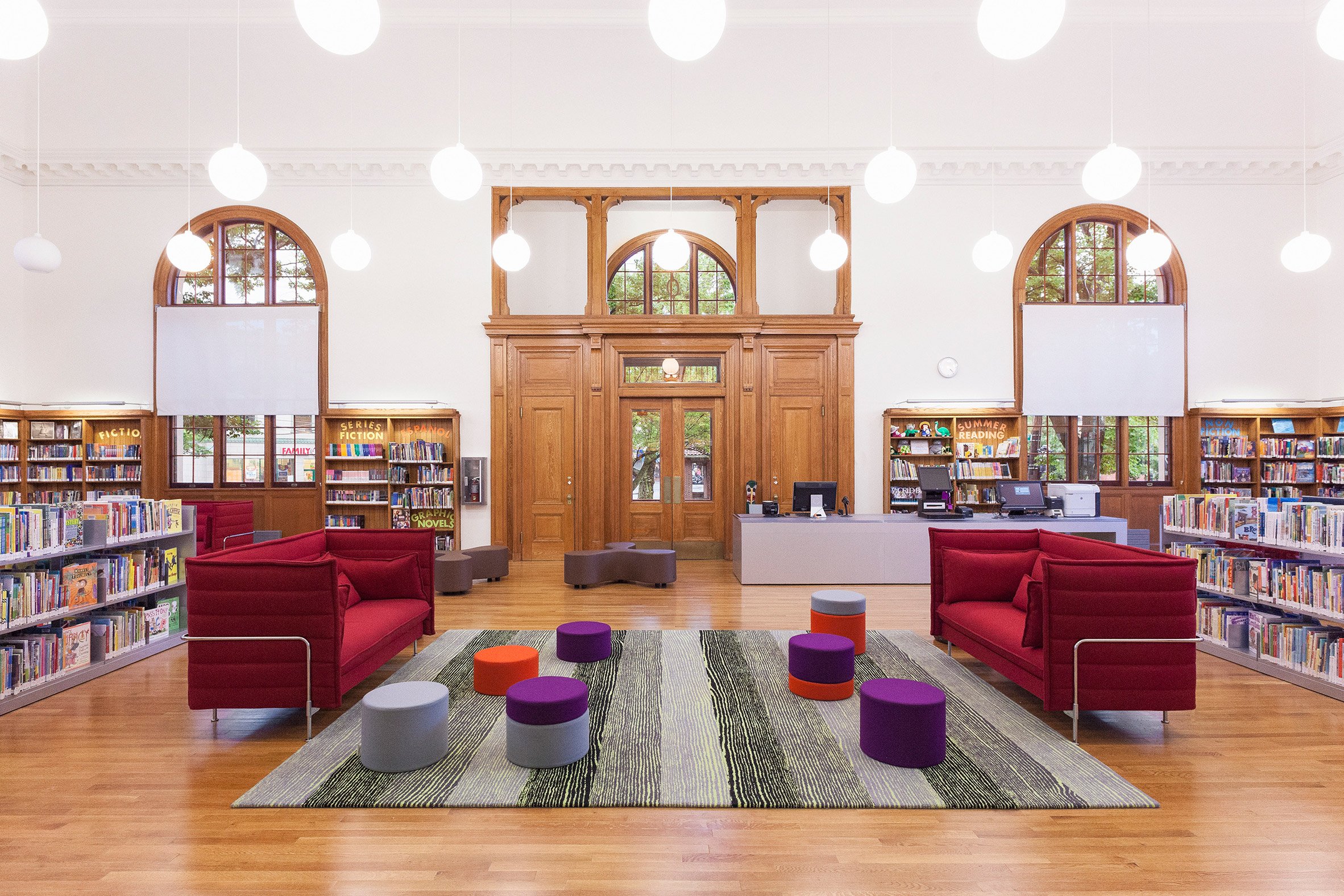 “An empty adjacent lot was allocated for a 7,000-square-foot (650-square-metre) addition to create a new library of 12,000 square feet (1,100 square metres) that would better serve the community and its current needs,” the studio said. 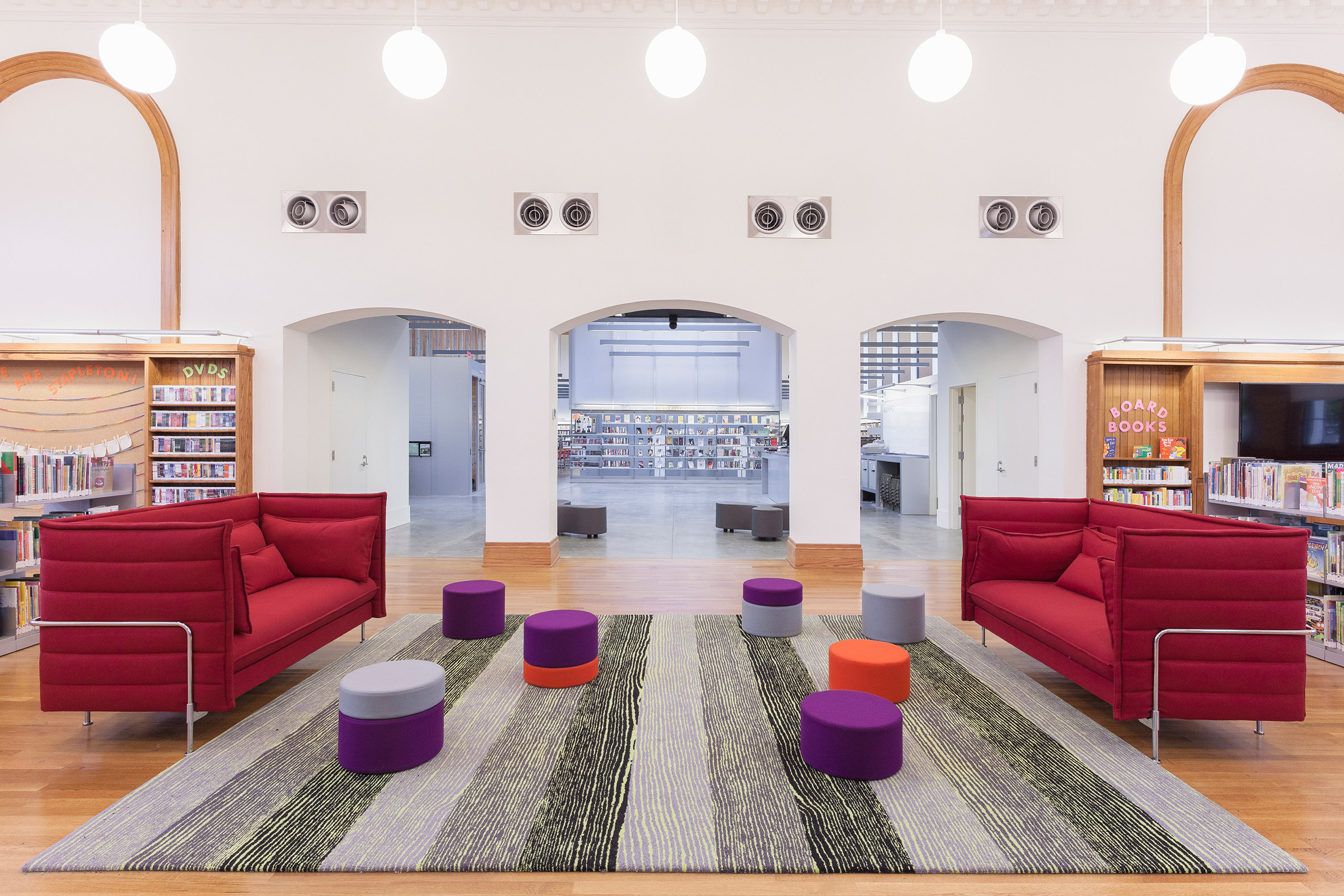 The architects began by replacing materials in the main structure, reviving the original interior to accommodate a children’s library.

Flanking the three doors making up the entryway, double-height arched windows disperse light across the white-washed walls and ceilings of the open volume. 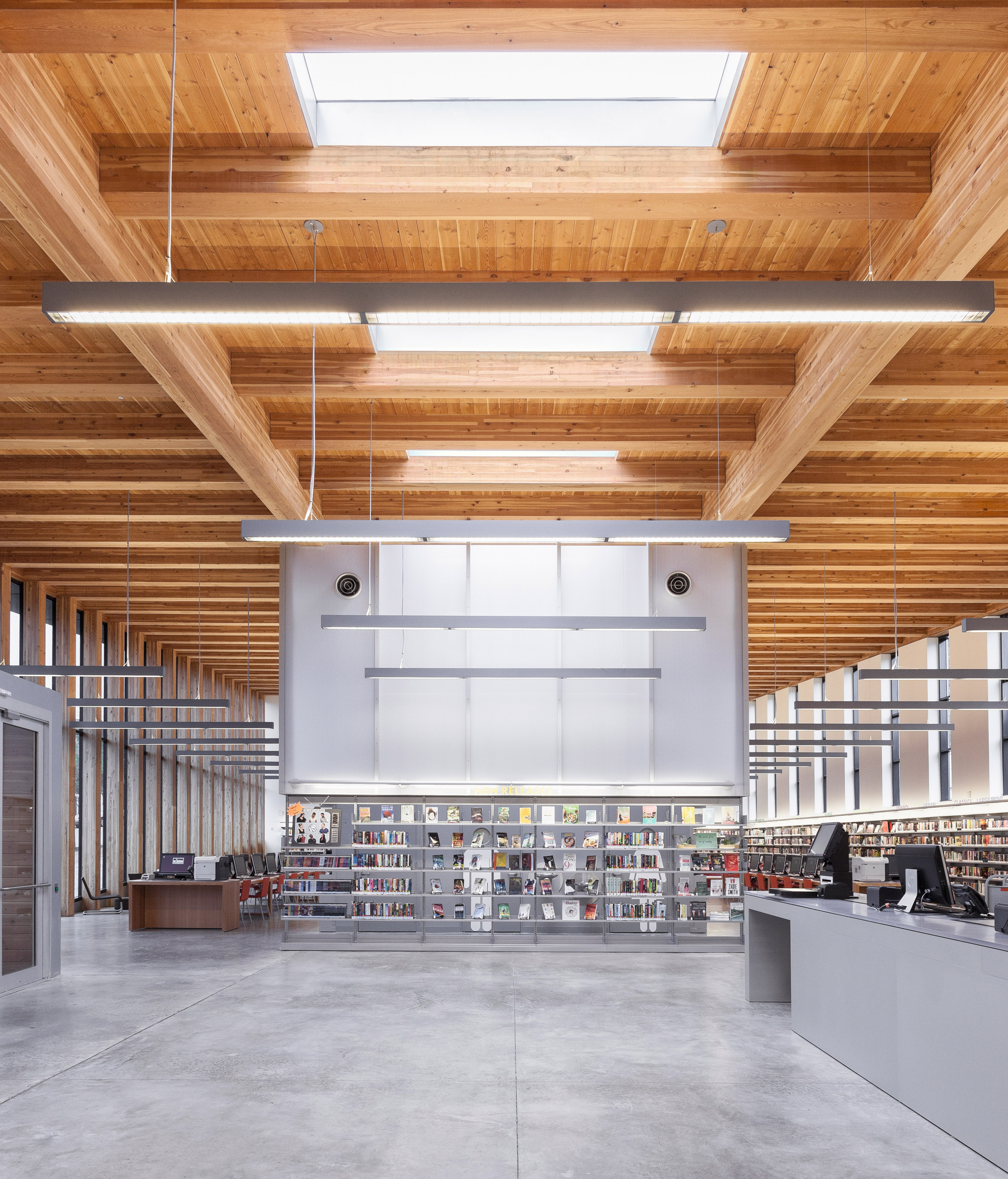 The south passage leading into the extension mirrors the design of the entry wall. Wood arches echoing the windows’ outline stand to either side of open doorways into the annex.

The firm built the cuboid addition around a timber frame recessed into the sloped site, addressing the need for the project to “be on a single level, stitch new building to old, and be handicapped accessible”. 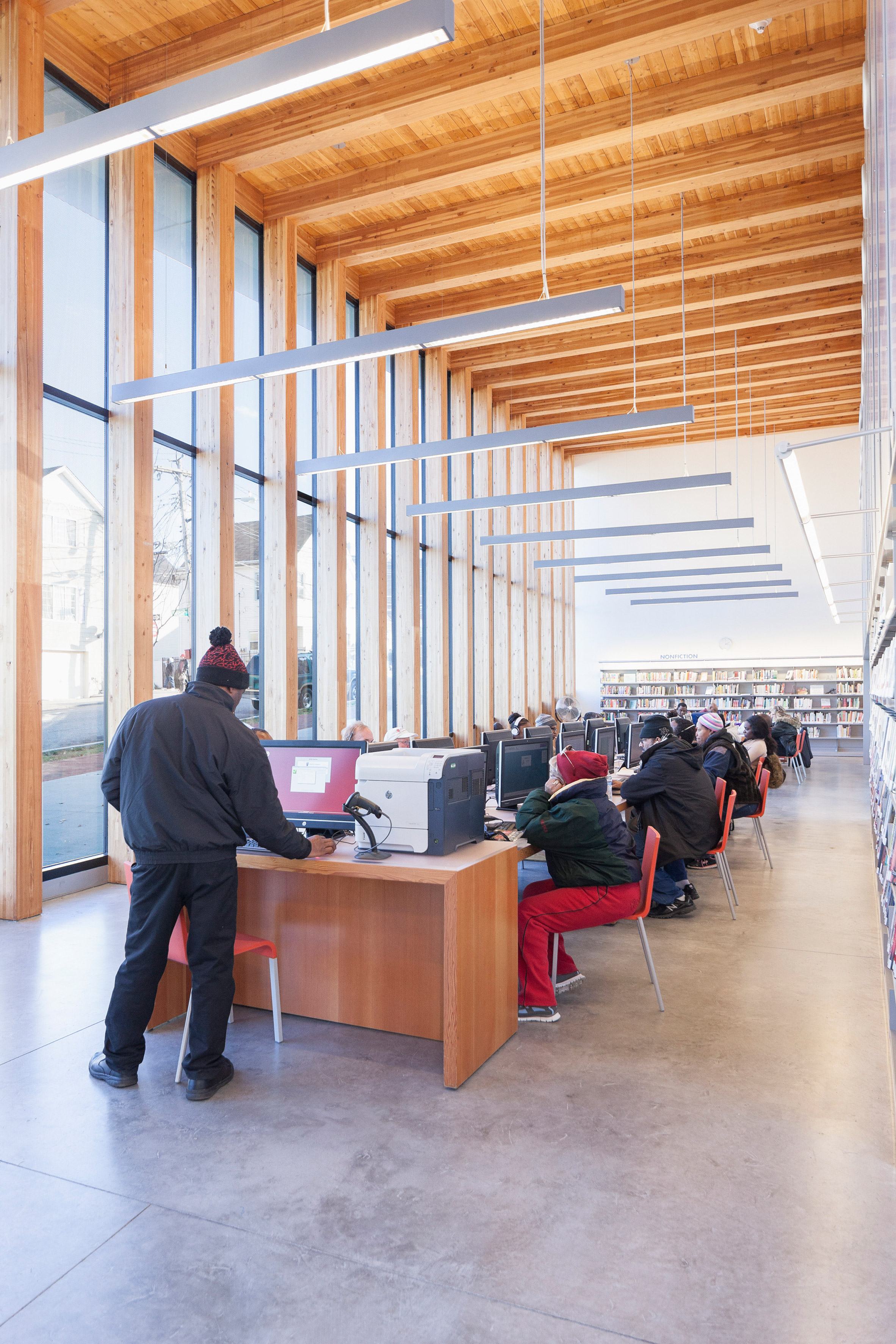 A zinc-clad gasket connects the two structures, allowing for a transition marked only by the shift from wood to polished concrete floors.

“The connection meets each structure with precision, respecting the architectural detailing and materiality of each,” Andrew Berman told Dezeen.  “The experience of moving through the connection is that of a brief pause, allowing one register the transition from new to old.” 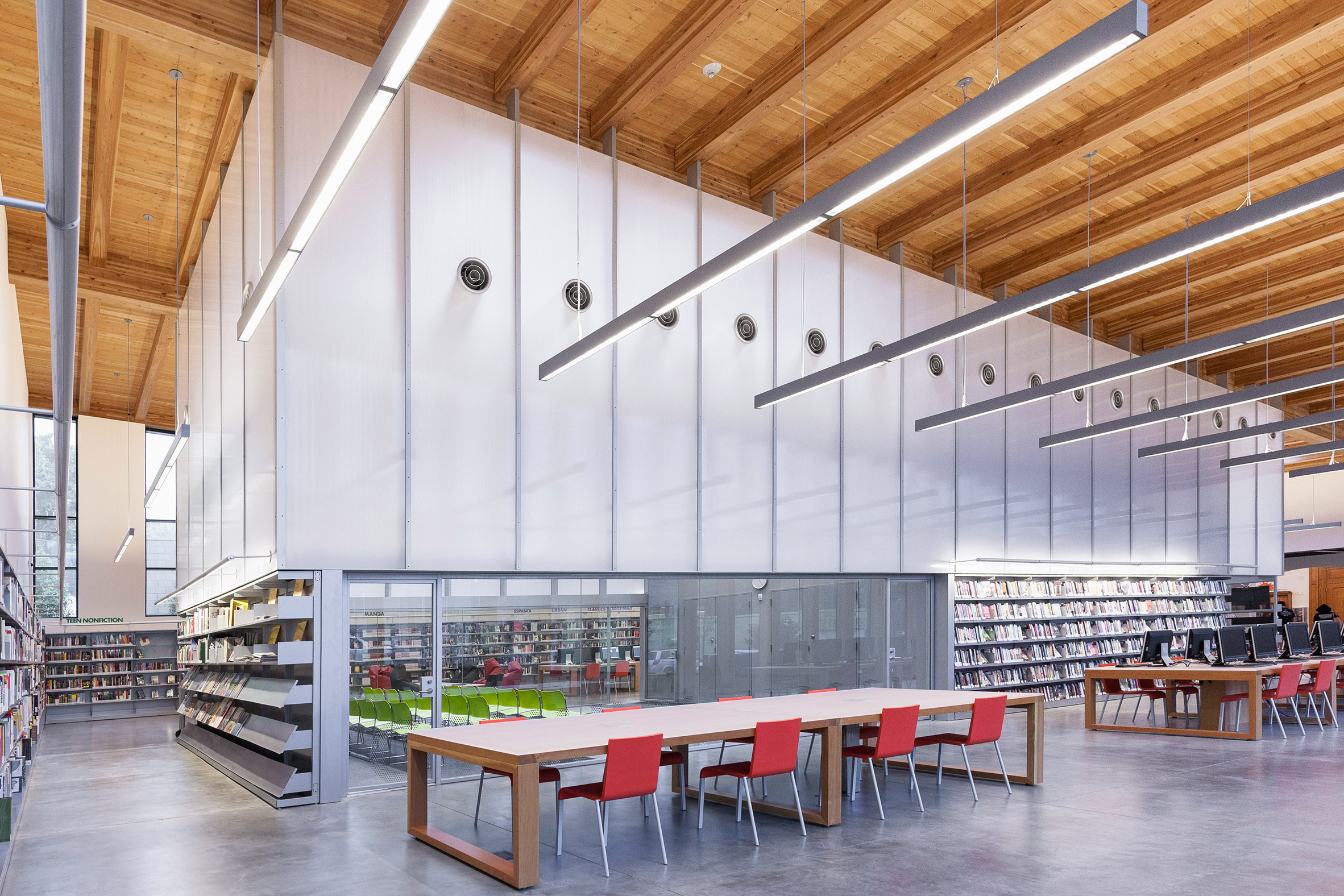 The dark metal panels continue across to wrap around the roof and south facade, placing emphasis on strips of glazing inserted between the wooden beams. The ample windows spanning the height of the east and west facades “invite the public and supply natural light”.

The sidewalk slopes down onto a flattened terrace outside the entrance into the extension. The platform disrupts the facade at an angle, creating a faceted surface. 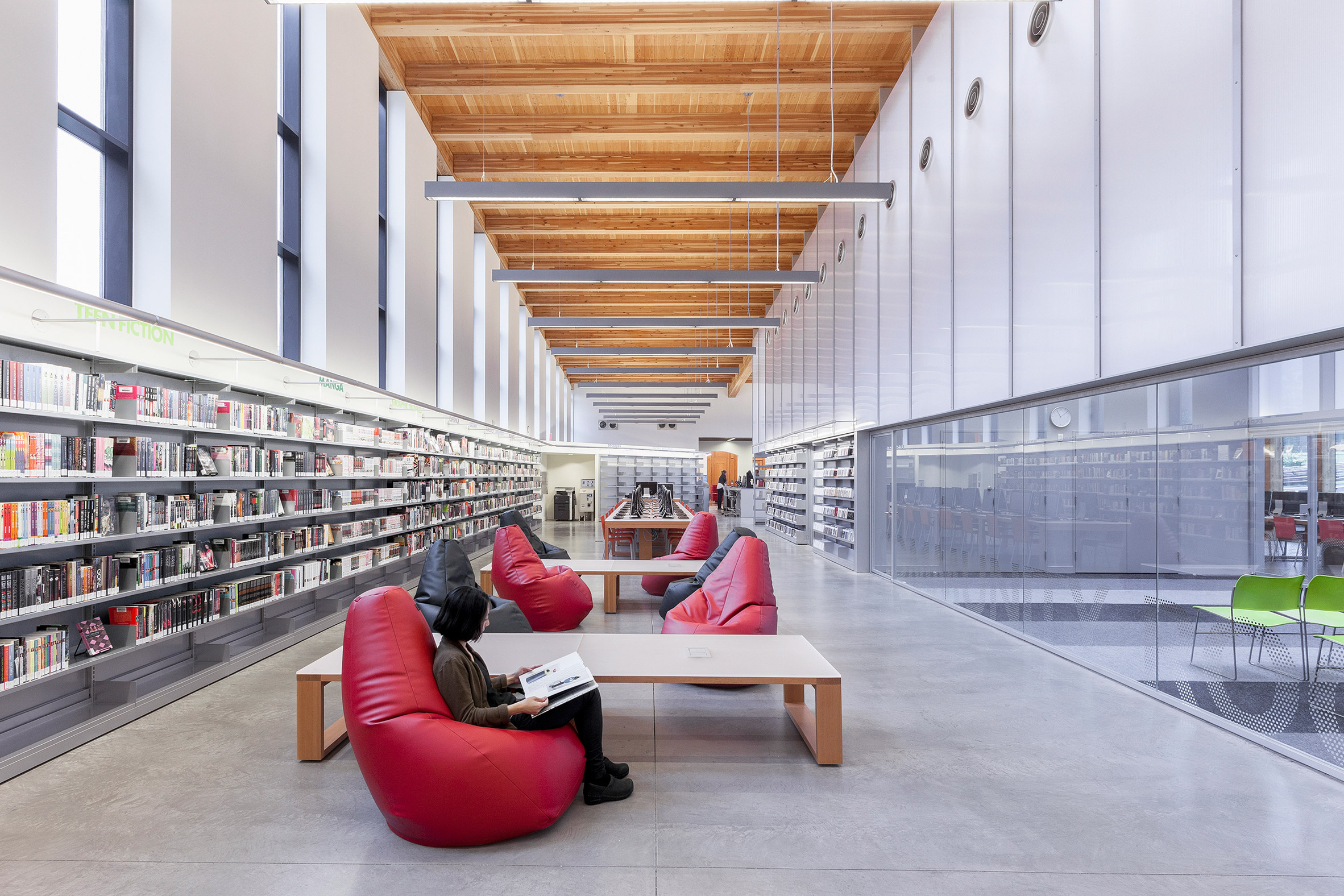 “The shift in geometry of the facade orients the new entry of the library toward the town square across the street, and allows the new entry to be visible from the center of the village,” Berman said.

“In pulling the entry facade back from the continuous edge of the roofline above, a portico type condition is created, further underscoring the entry.” 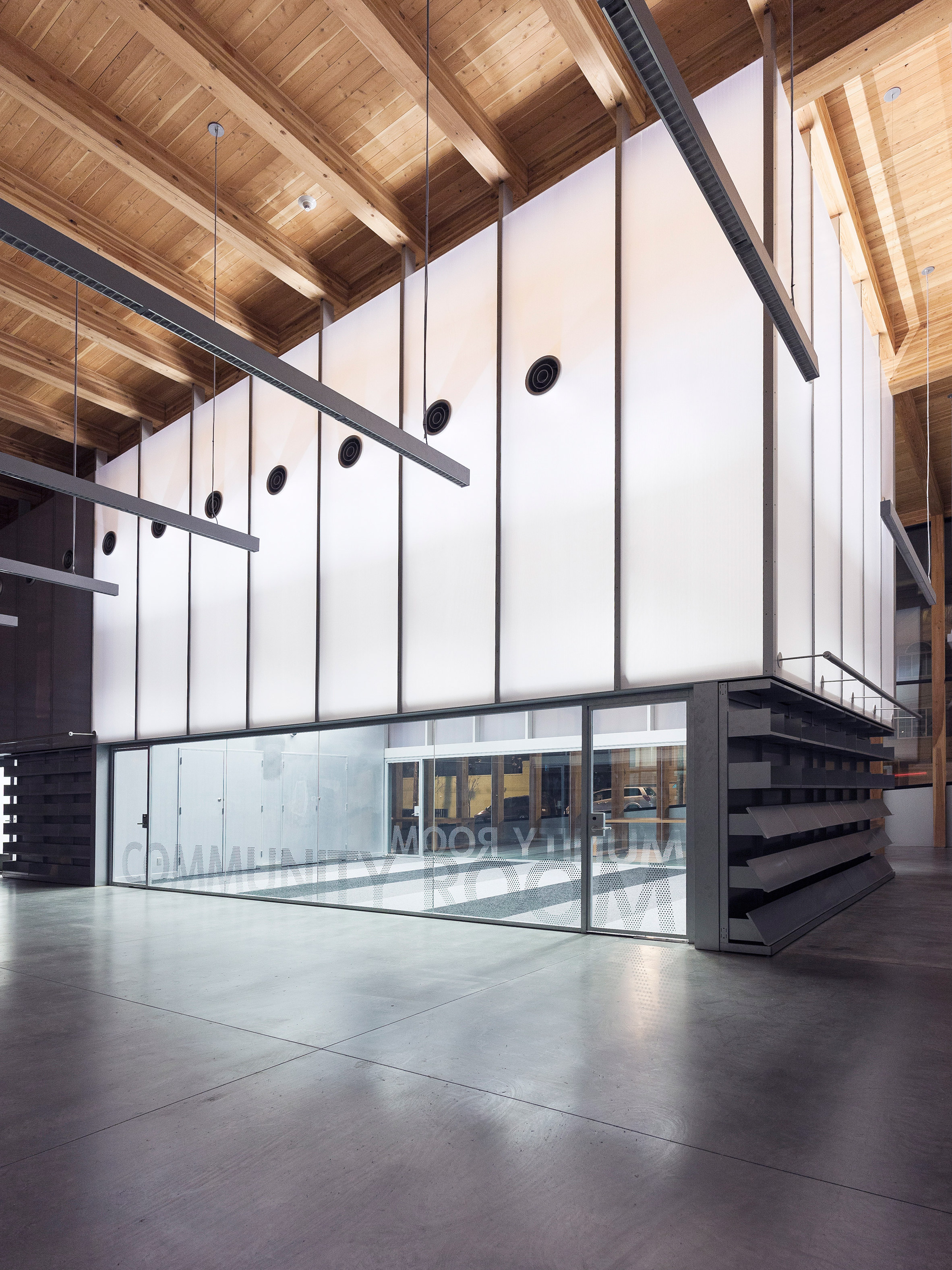 Inside the extension, exposed beams and columns support a wood-panelled ceiling. The revealed timber structure “provides a sense of rhythm, scale and material richness unexpected in contemporary public buildings”.

Located in the centre of the large room, a double-height volume partitions the extension into sections for adults and teenagers. 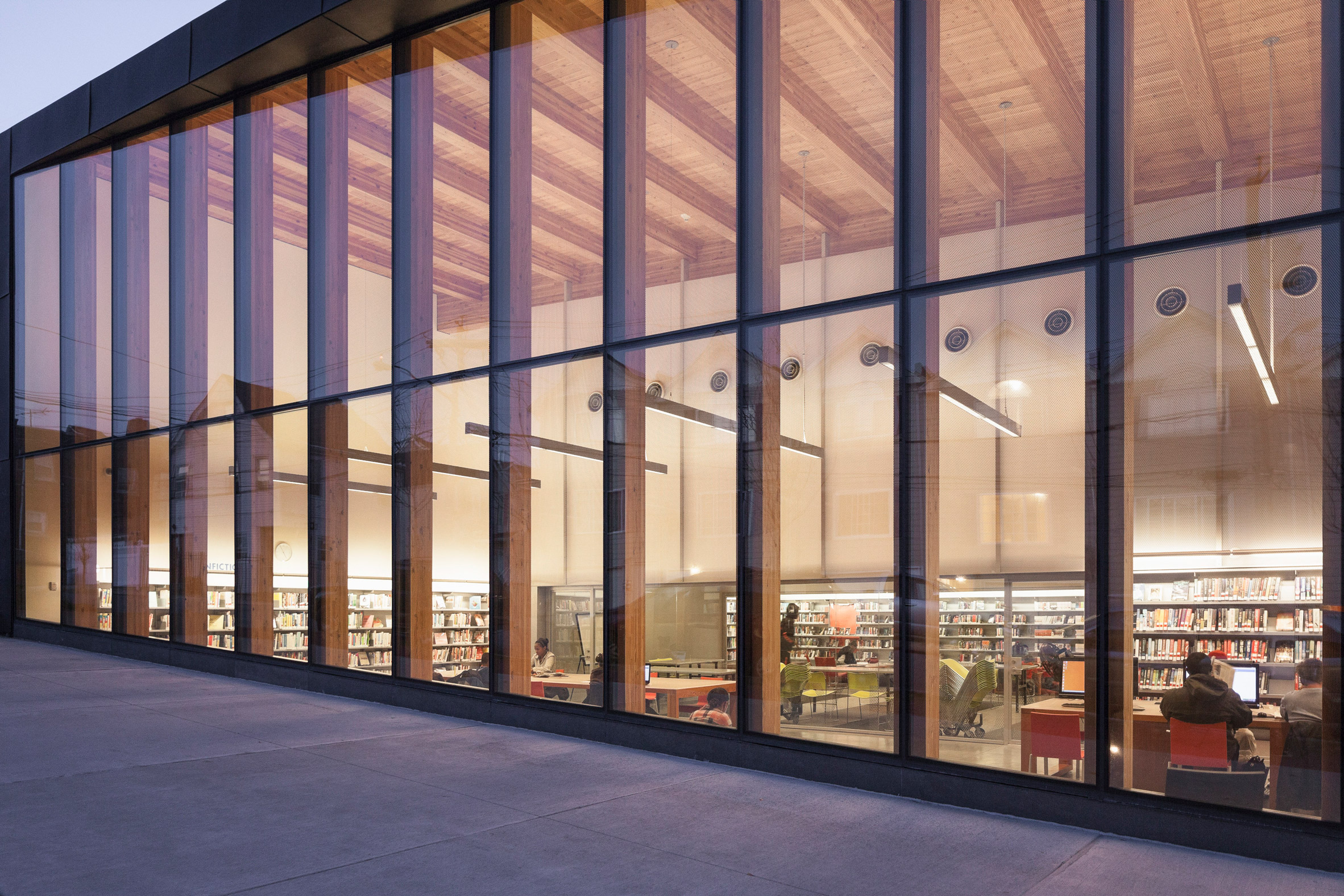 Glazing of varying transparency wraps around the enclosed space – revealing a community room for presentations, while concealing an area for staff, and a second-storey mechanical room.

While supplying the community with a variety of digital resources, the architects sought to emphasise the continuing relevance of print publications in their design.

“[We] sought to assert the enduring relevance and primacy of the book,” said the firm. “As such, all walls are lined with bookshelves, putting the entire collection of the library within view, and within reach, of all its patrons.”

Elsewhere in New York, the city’s main Public Library was due to be overhauled by Foster + Partners, but the controversial plans were abandoned and Mecanoo was chosen for the upgrade instead.

Meanwhile, construction is well underway on a new library in Queens designed by Steven Holl.

Photography is by Naho Kubota. 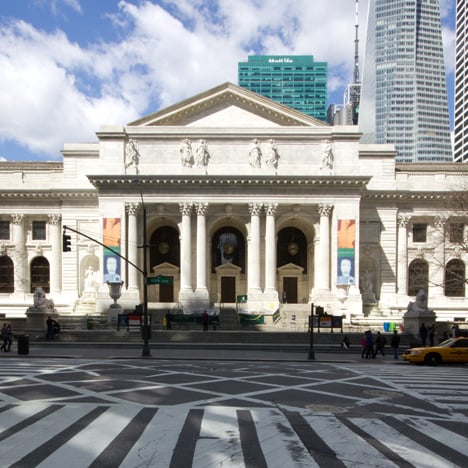