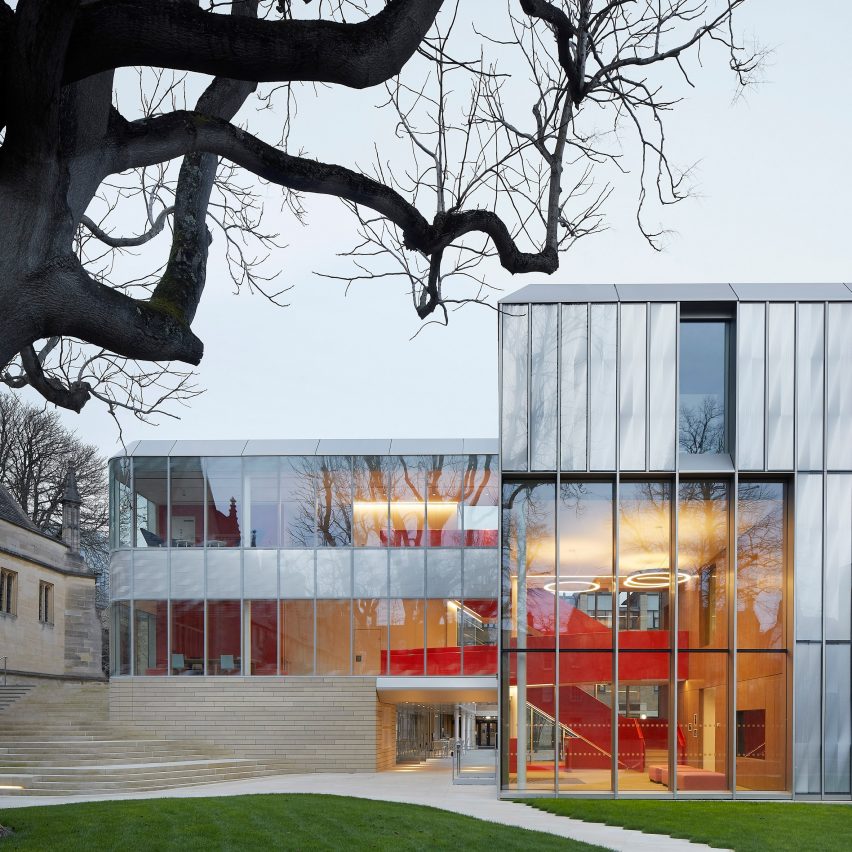 London-based architecture studio AL_A has designed two buildings for the University of Oxford that are wrapped in aluminium and etched glass to mimic stone and reflect the site’s historic setting.

The two interconnected buildings form part of the Wadham College campus and consist of an undergraduate centre that houses common and social spaces and work areas, and a new access centre for visiting school students.

The campus is organised around a series of formal courtyards, which Amanda Levete Architects (AL_A), said have become disconnected over years.

The two new buildings aim to better connect the surrounding college buildings and recentre their quads, or courtyards, as the social centres of the campus.

“We wanted to re-establish the original masterplan and the relationship between the quads, reconnecting the college physically and visually through improved connections and views through the buildings and between the quads,” AL_A director Ho-Yin Ng told Dezeen.

“The quads are the social centres of the college, and we wanted to emphasise this by establishing a gathering space at the heart of the site, on the steps of the new connecting stairway up to the library terrace.”

The two buildings are clad in glass that reflects the nearby buildings, with the aim of allowing the contemporary structures to blend in with their historic surroundings.

The glass on the access centre is vertically etched to create a worn, stone-like texture that mimics surrounding stone buildings.

“The two new buildings are distinct in their function and in their funding, and so we designed for the two different identities,” said Ng.

“At the same time, we wanted to connect them, expressing their common endeavour of making Wadham a place of intellect and great imagination,” he added. “We have treated them as brother and sister, using the same materials on each but different applications.”

“In this way, they mirror the rough and the smooth stone around the entrance to the college, the Elephant Gate, where additions and modifications throughout history are written in the building materials.”

The exterior of the undergraduate centre has a subtler finish than the access centre and was designed to be more transparent, allowing the interior and student activity to become the focal point.

Anodised aluminium was used across the exterior of both buildings, forming gridded panelling that frames metal-trimmed windows.

“Layers of subtle colour add warmth and ground the building in its context, referencing the colours of the stained-glass windows in the college chapel,” Ng explained.

“The warm finish of the metal aluminium window reveals and fins match the warm tones of the stone finishes throughout the College,” he added.

“The delicate details and colours of the facade further activate the buildings by shifting in tone throughout the day and through the seasons; as you approach the centres from a distance, the perception changes.”

A large staircase made from Yorkstone physically and visually connects the old campus library with the new access centre by sweeping into the base of the structure.

The Yorkstone steps form amphitheatre-style seating to create a social space at the heart of the campus between two courtyards.

Inside, the buildings are connected by a red “ribbon-like” staircase that brightly contrasts with the light stone surroundings.

“This ribbon-like stair is a streak of colour rising up the building with tendrils seen to connect into both buildings,” said Ng.

“It is highly visible from outside from both the back and bar quads. It is a graphic and metaphorical as well as a physical link between two centres that are otherwise distinct.”

AL_A was founded in 2009 by Amanda Levete. Recently, the studio revealed its plans to design a nuclear fusion power plan for Canadian energy company General Fusion.

Elsewhere, SO-IL has designed an installation that bisects the AL_A-designed MAAT museum.