A concrete frame angles out from a window at the top of this irregularly shaped housing block in South Korea, which was designed by architect Moon Hoon to resemble an owl. 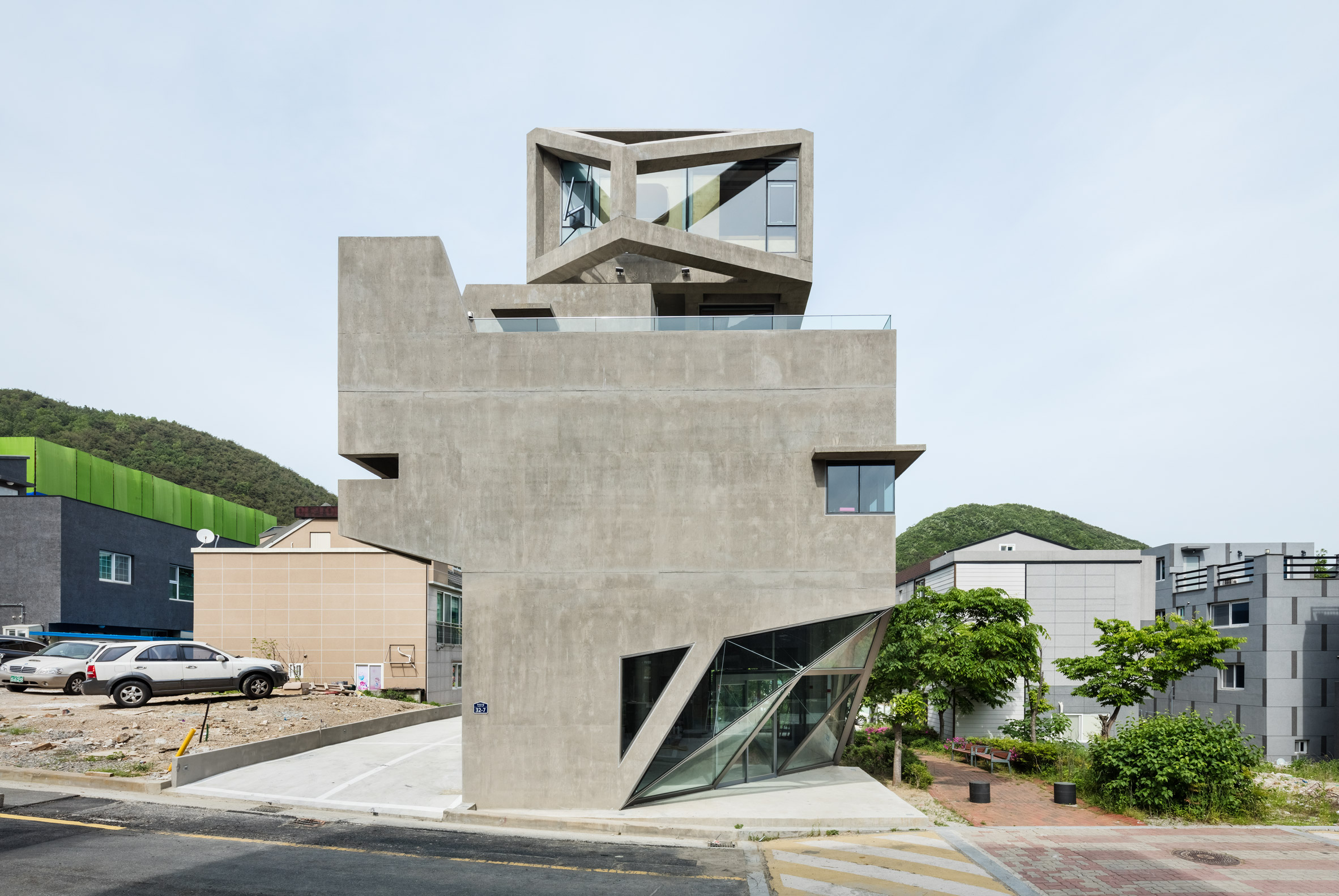 South Korean architect Moon Hoon designed the four-storey Busan Times building for the city of Busan and included plenty of windows to offer views across the urban landscape. 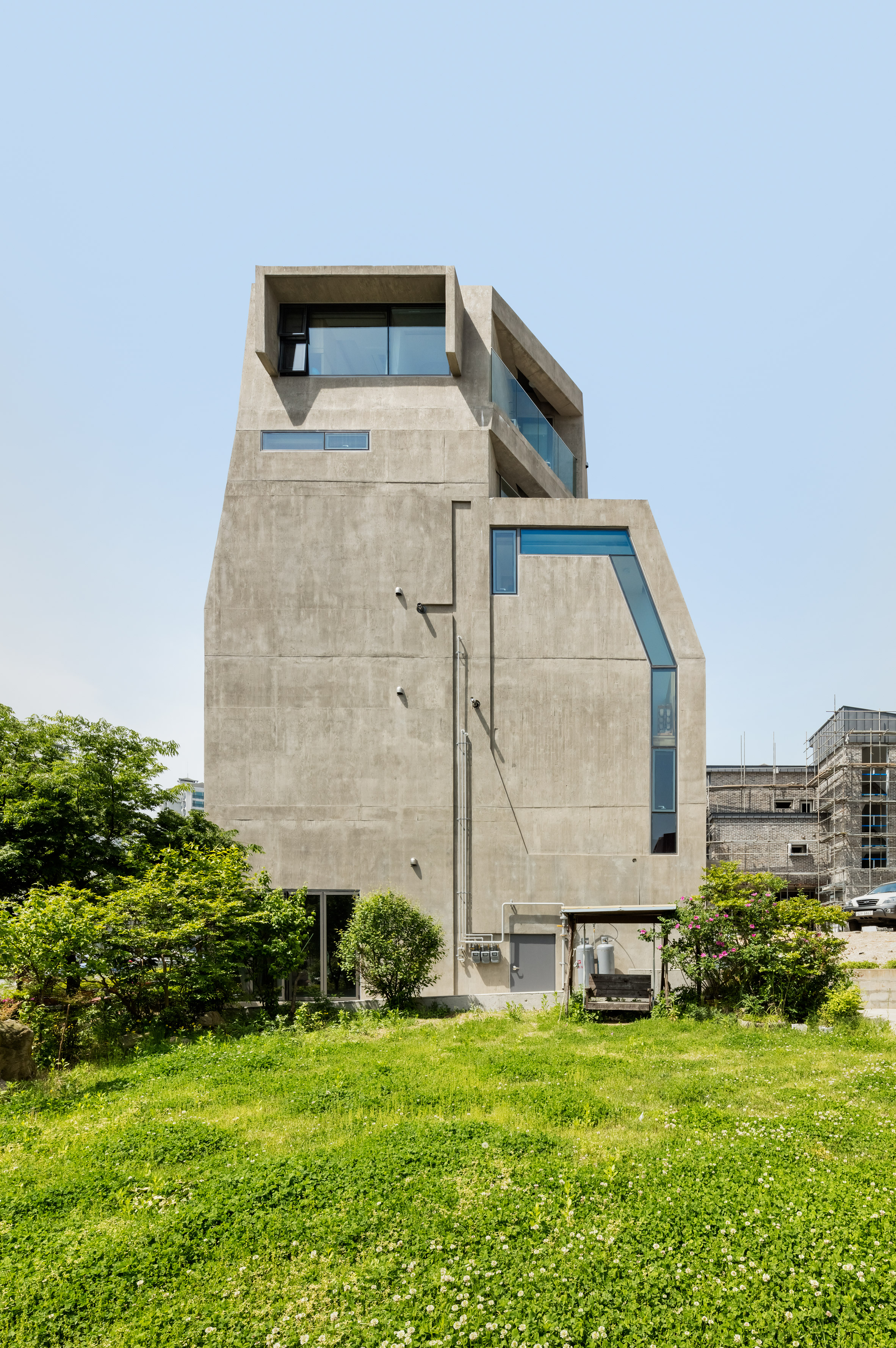 A series of setbacks cut into the building create two single-storey flats on the first floor and a smaller two-storey apartment stacked above to one side – like the neck and head of a bird atop its plumper body. 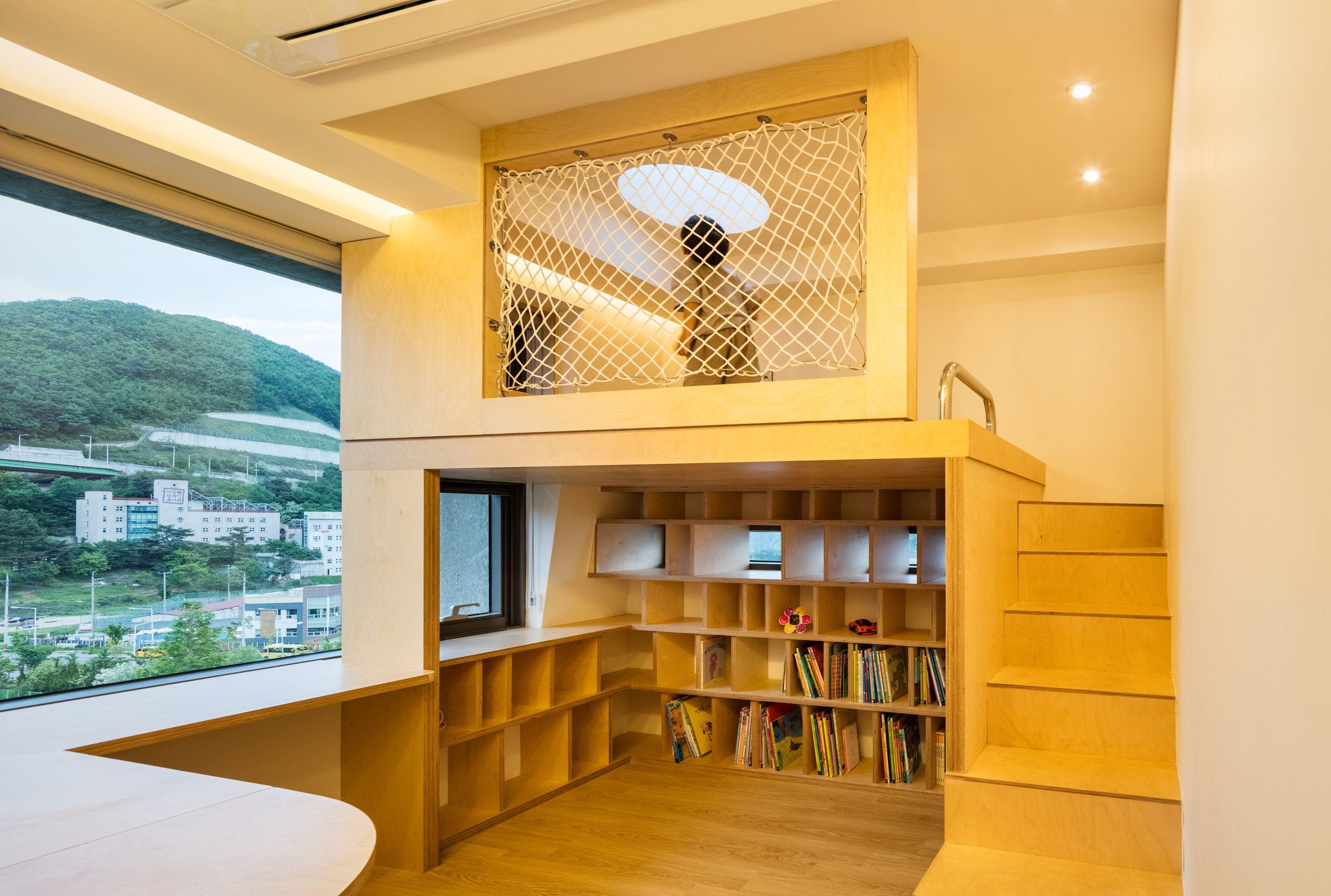 A concrete frame that extends from a large street-facing window in the uppermost apartment is intended to represent the angular face of an owl. Two openings at either side resemble the outline of the bird’s eyes.

At night time, light glowing from these windows appear “like the glaring eyes of an owl”, according to the architect. 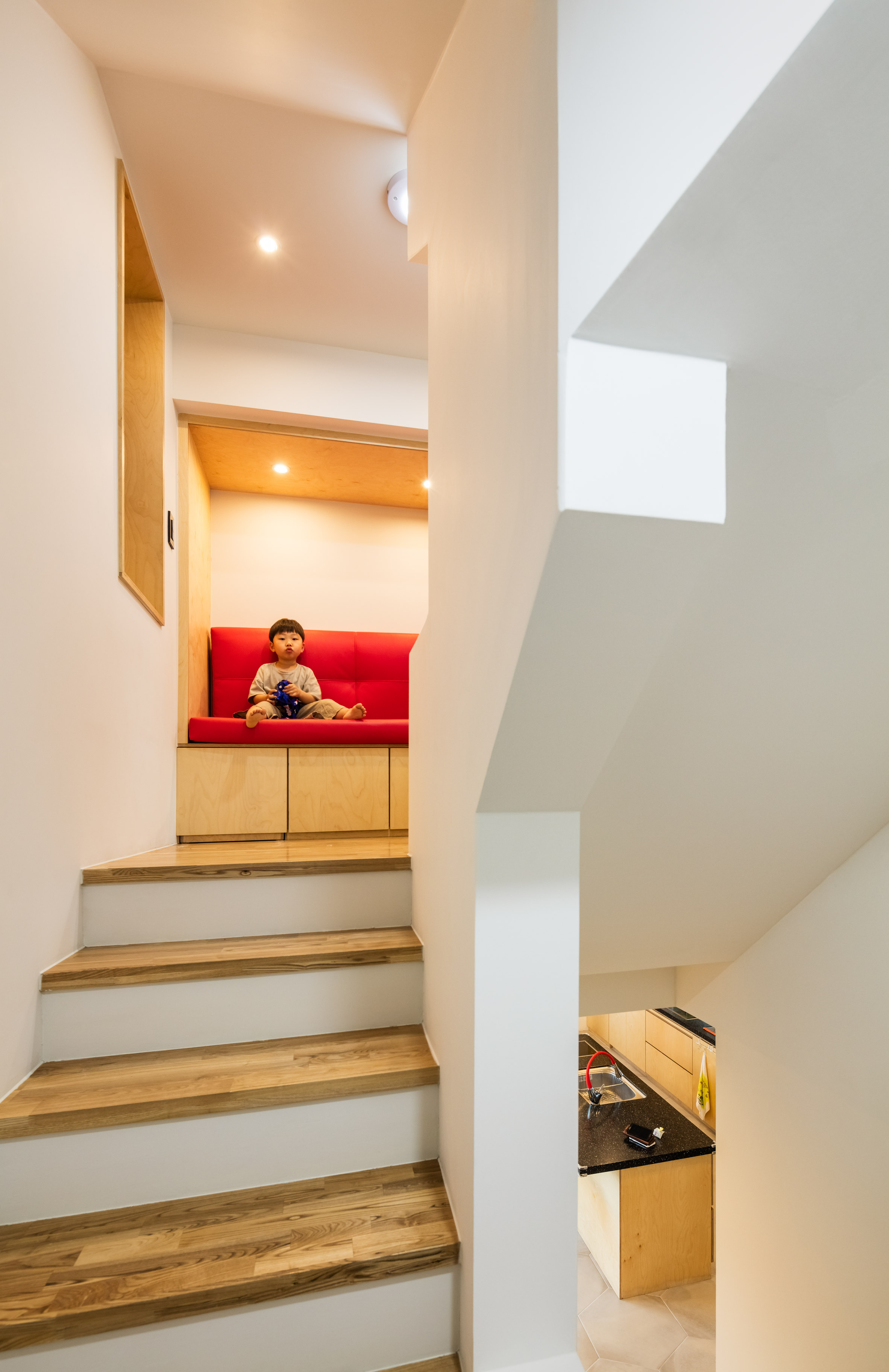 The bird’s wing is represented by a vertical block with a sliced corner containing a skylight. This protrudes from eastern side of the building and houses the main staircase.

“If you look at the building from the roadside, you may associate the shape formed by the angles of the setback regulation – that has now been abolished – with a big head and two eyes,” said the architect. 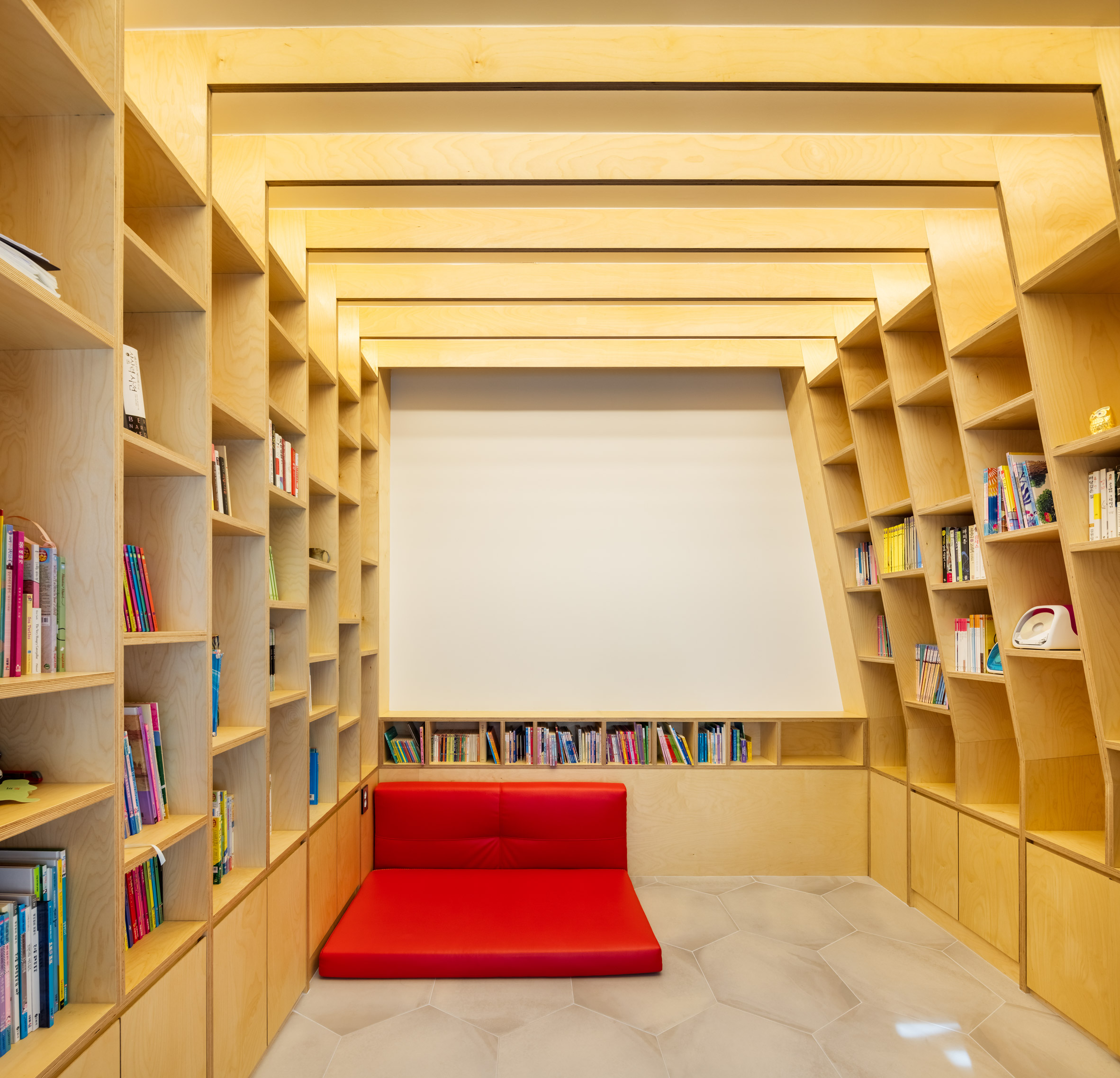 “The building looks exactly like an owl when you see it from the rear side,” he continued. “The staircase is a wing and the windows of a child’s room are the eyes within a head.”

The master bedroom and dressing room of one apartment occupy this top level space with views across the city, while a child’s bedroom is placed behind. 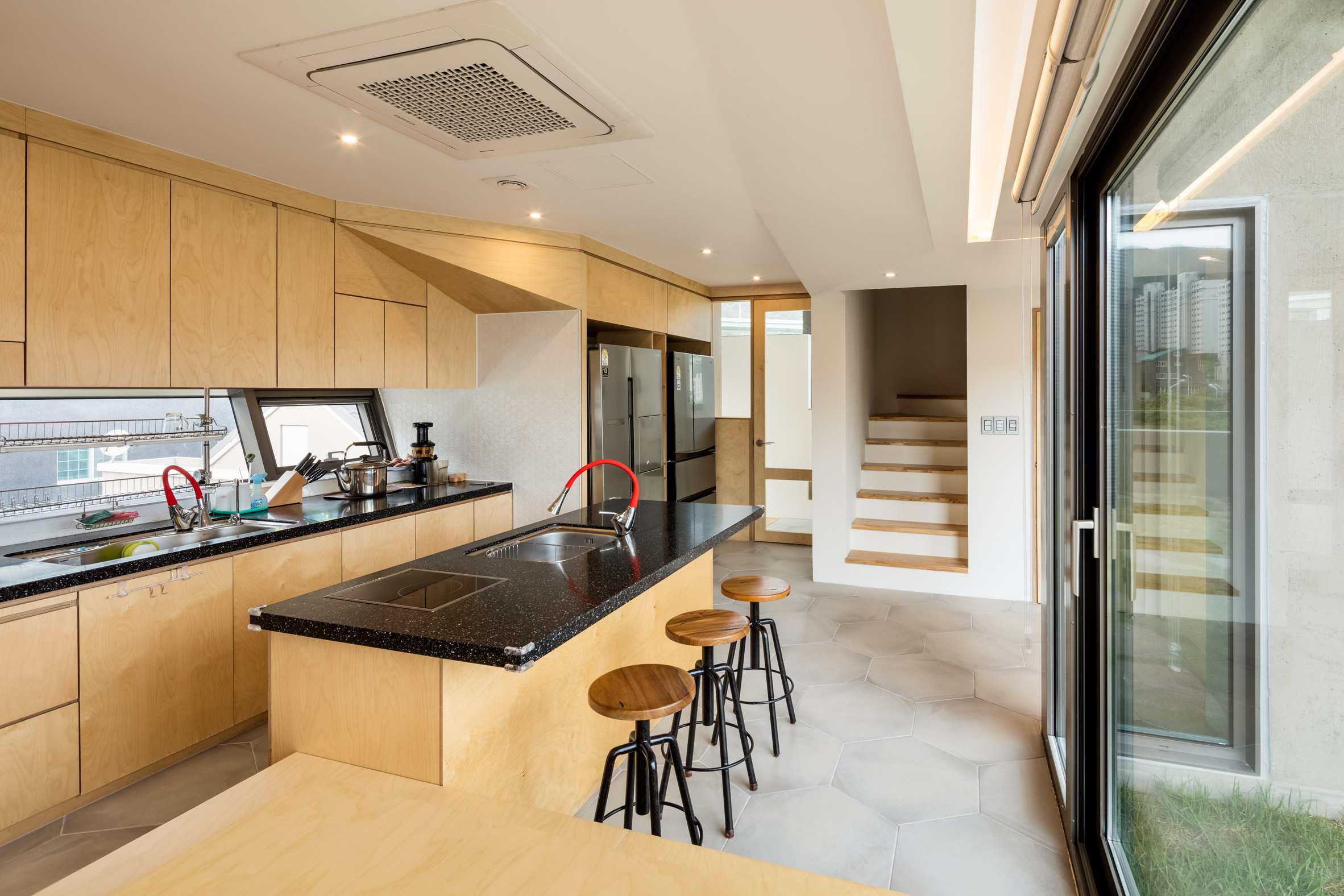 Moon Hoon wanted the space to be “full of quirks and fun” for the child. The bedroom is arranged on a split level, with a mezzanine bedroom protected by a net railing. It features a small circular skylight above the bed to offers a view of the sky. 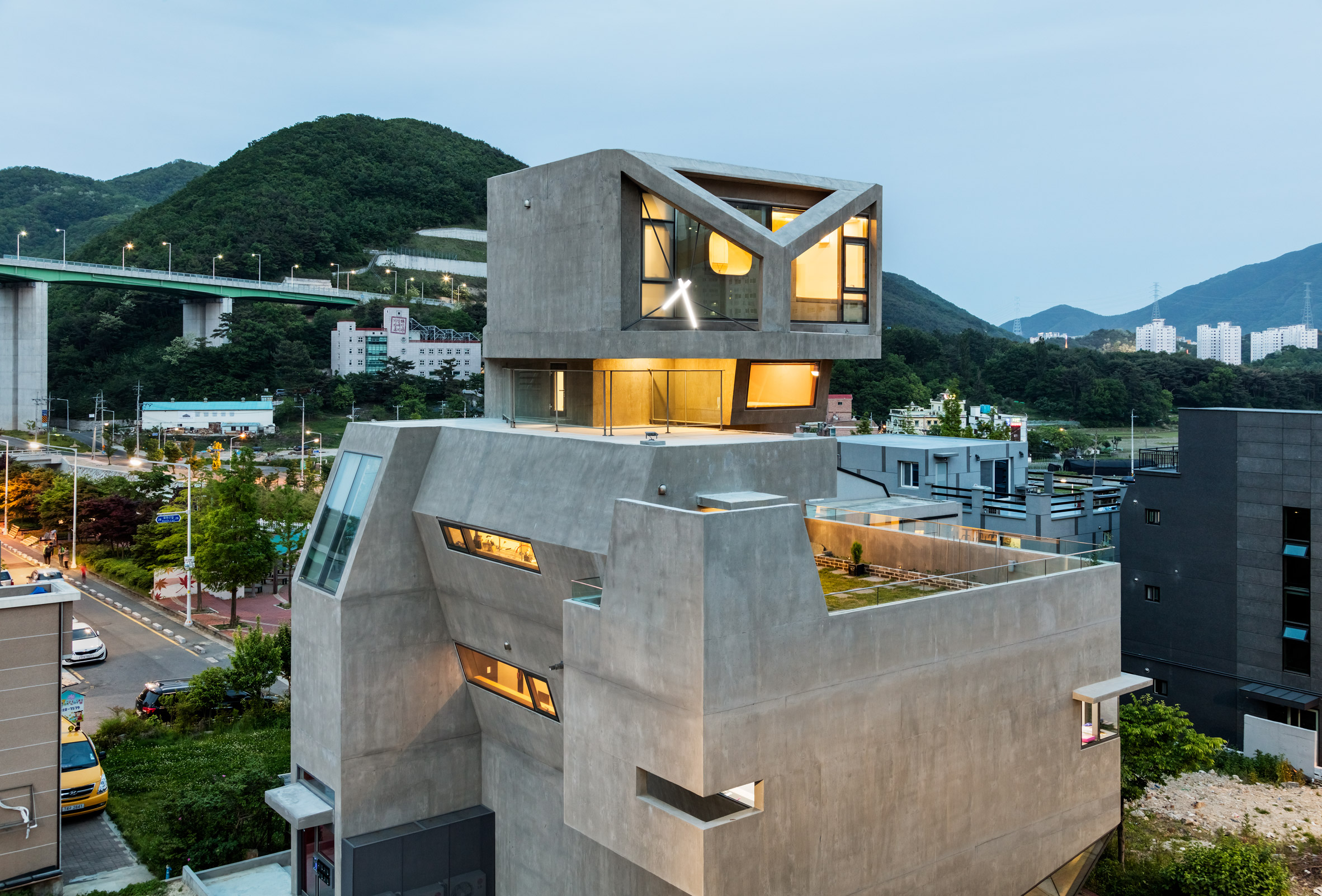 A library occupies the floor beneath, where a hole leads down to a playing space. Named the attic, this area is located in a volume that extends out below the head of the building and features a window.

An open-plan kitchen and dining room, with a living room adjacent are placed in the lowest level of the apartment. Here, sliding doors open onto a terrace on top of a further setback, which overlooks the south-facing garden. 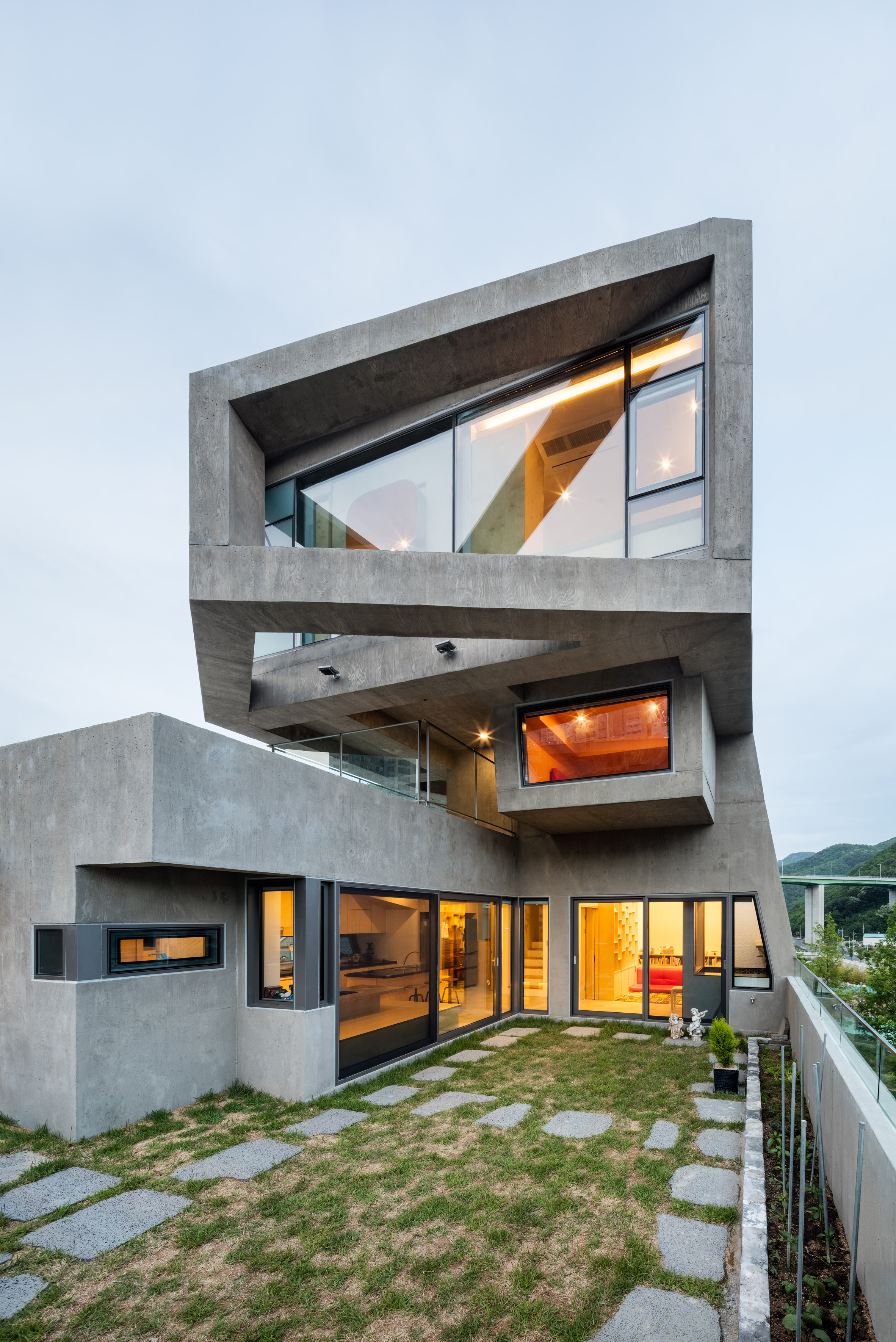 Two more apartments are located in the first floor of the housing block, where the walls on the eastern facade of the lower block are angled upwards and outwards so as not to obstruct light from entering. 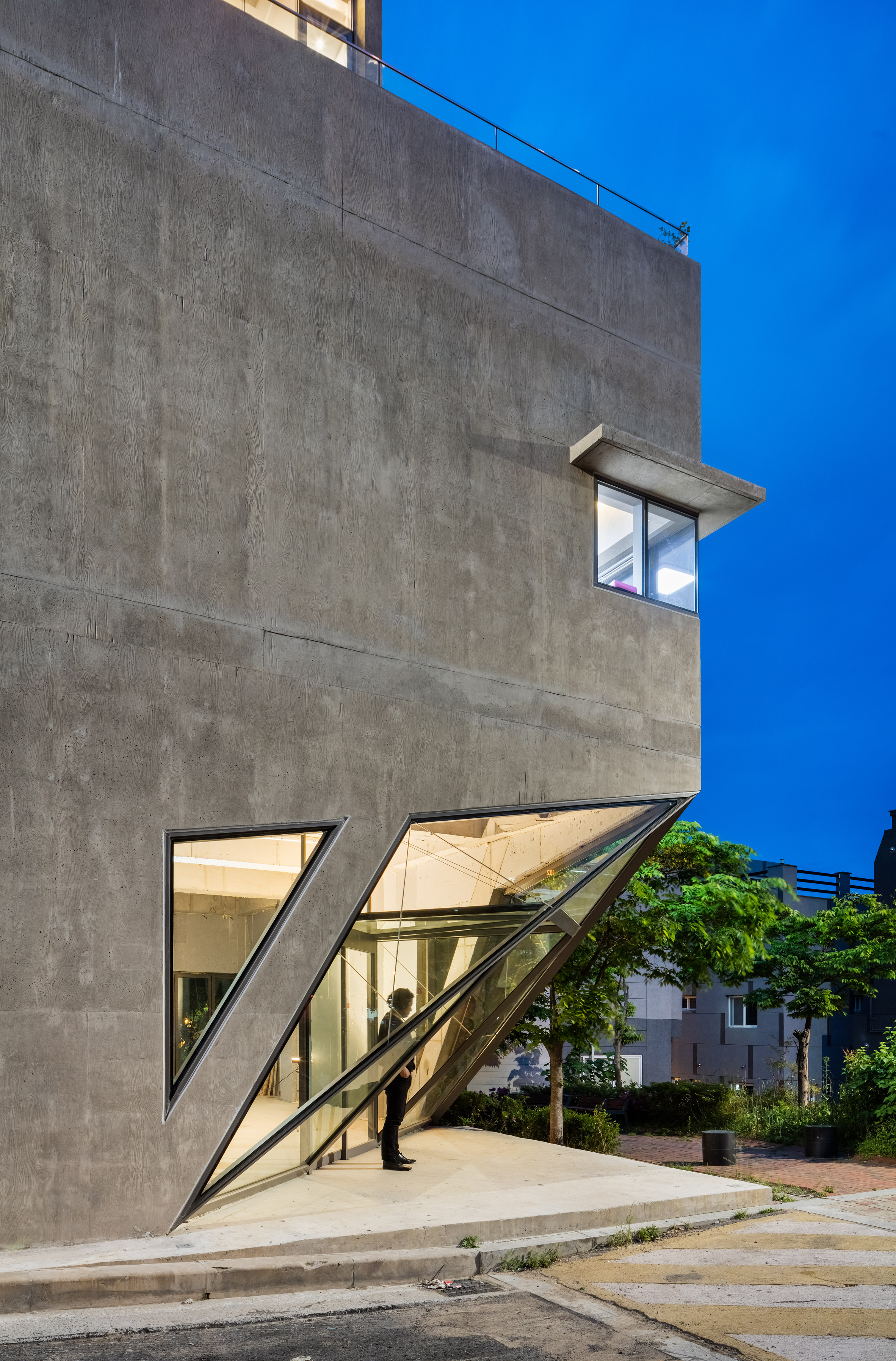 A ribbon of glazing runs on the western side, while faceted glass walls beneath create a covered entrance.

Moon Hoon came in at number 118 among architects on the inaugural Dezeen Hot List, a guide to most popular architects, designers and institutions of the last year. 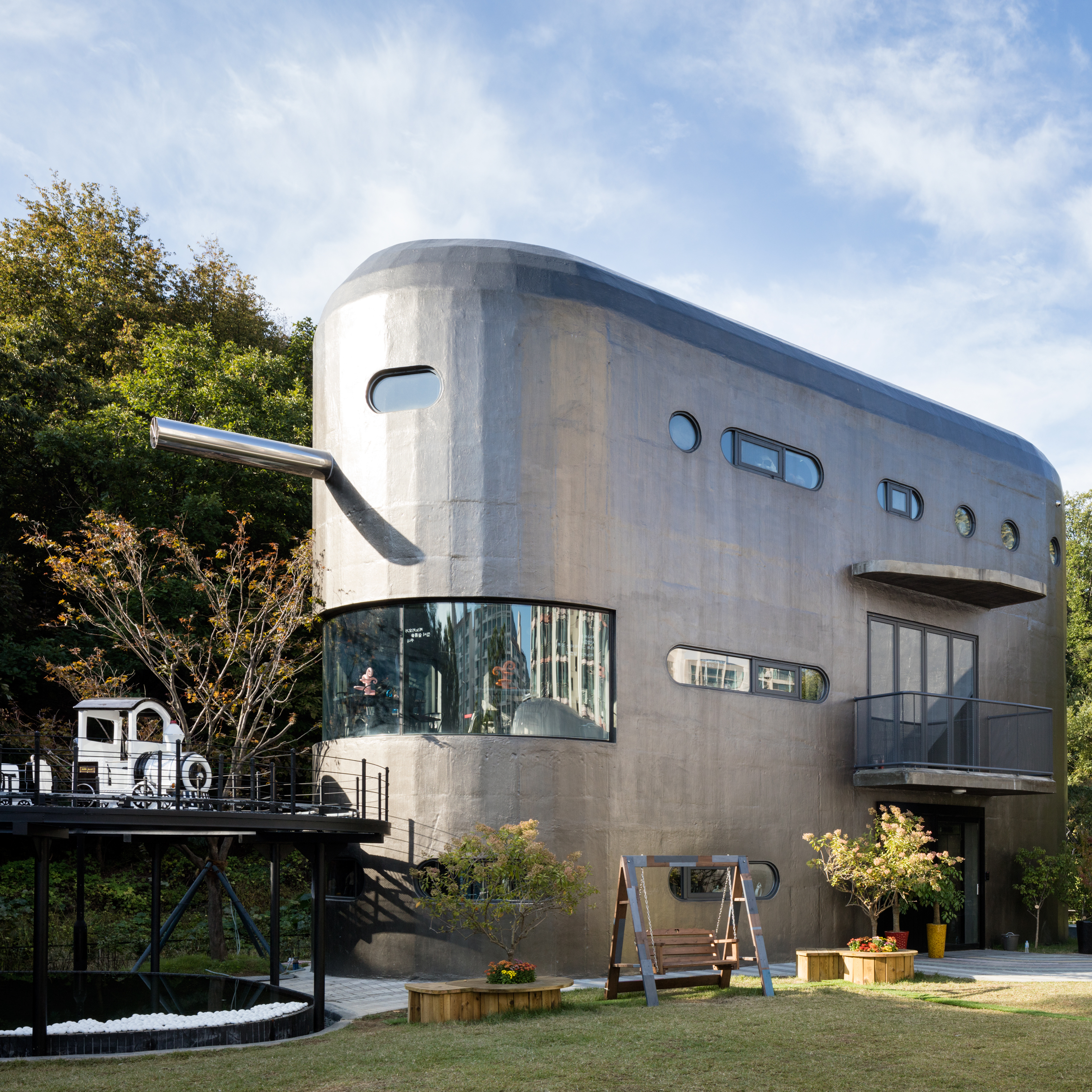 Other projects by the architect known for his unusual concepts include a museum dedicated to the fictional character Pinocchio, a holiday home on Jeju Island with a copper observation pod modelled on the head of a windswept woman and a pair of buildings in Seoul featuring moon-shaped indentations.

Photography is by Shin Kyungsub.