A staircase featuring cantilevered treads connects the library and living room at the centre of this rough granite-clad house in the Spanish town of Magaz de Abajo. 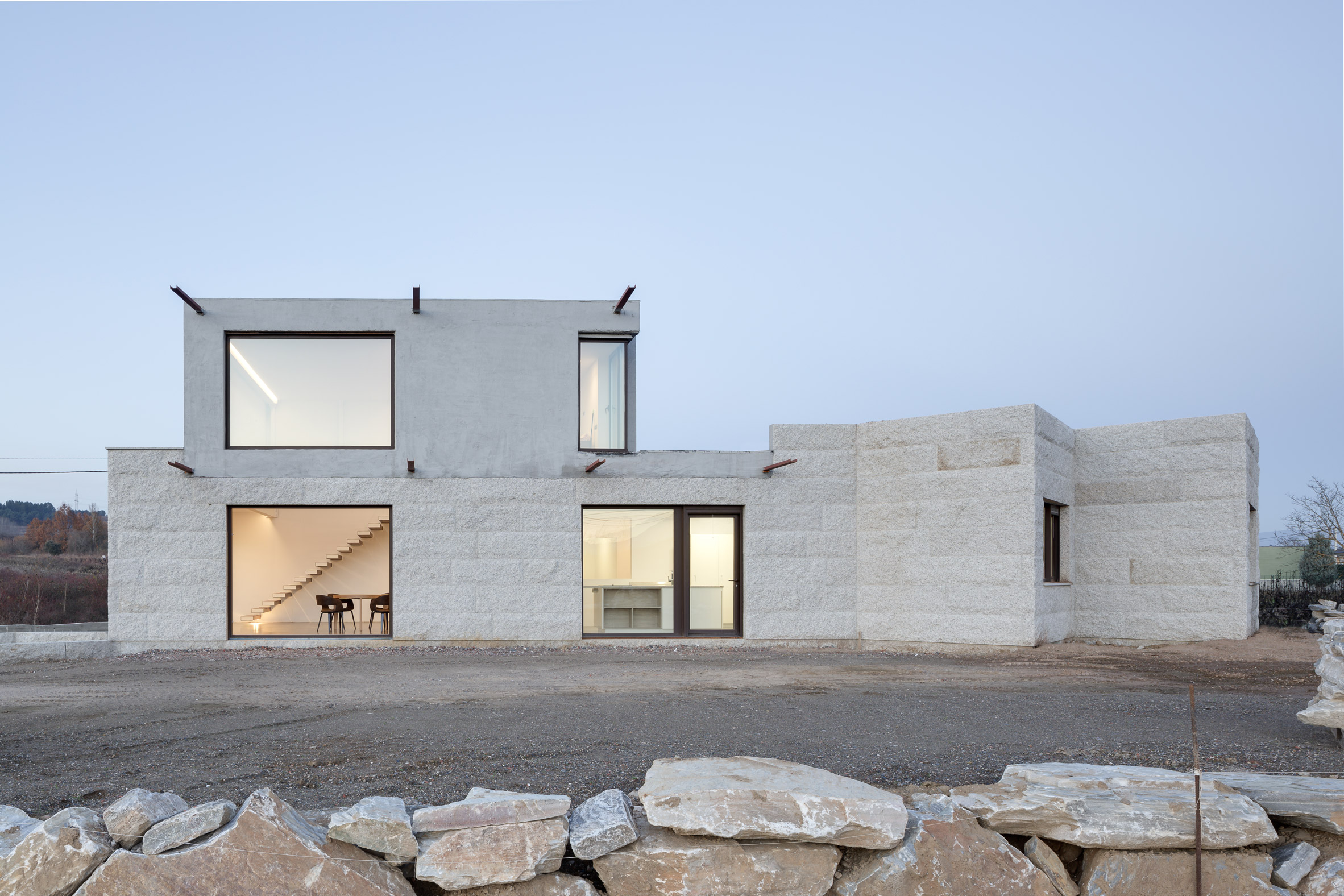 Local architect Marcos Miguélez was asked to create the first home for a young couple with an interest in contemporary architecture.

Casa VMS occupies a triangular plot on the edge of the town, which is bordered by an orchard of fruit trees, a small dirt road and a larger street. 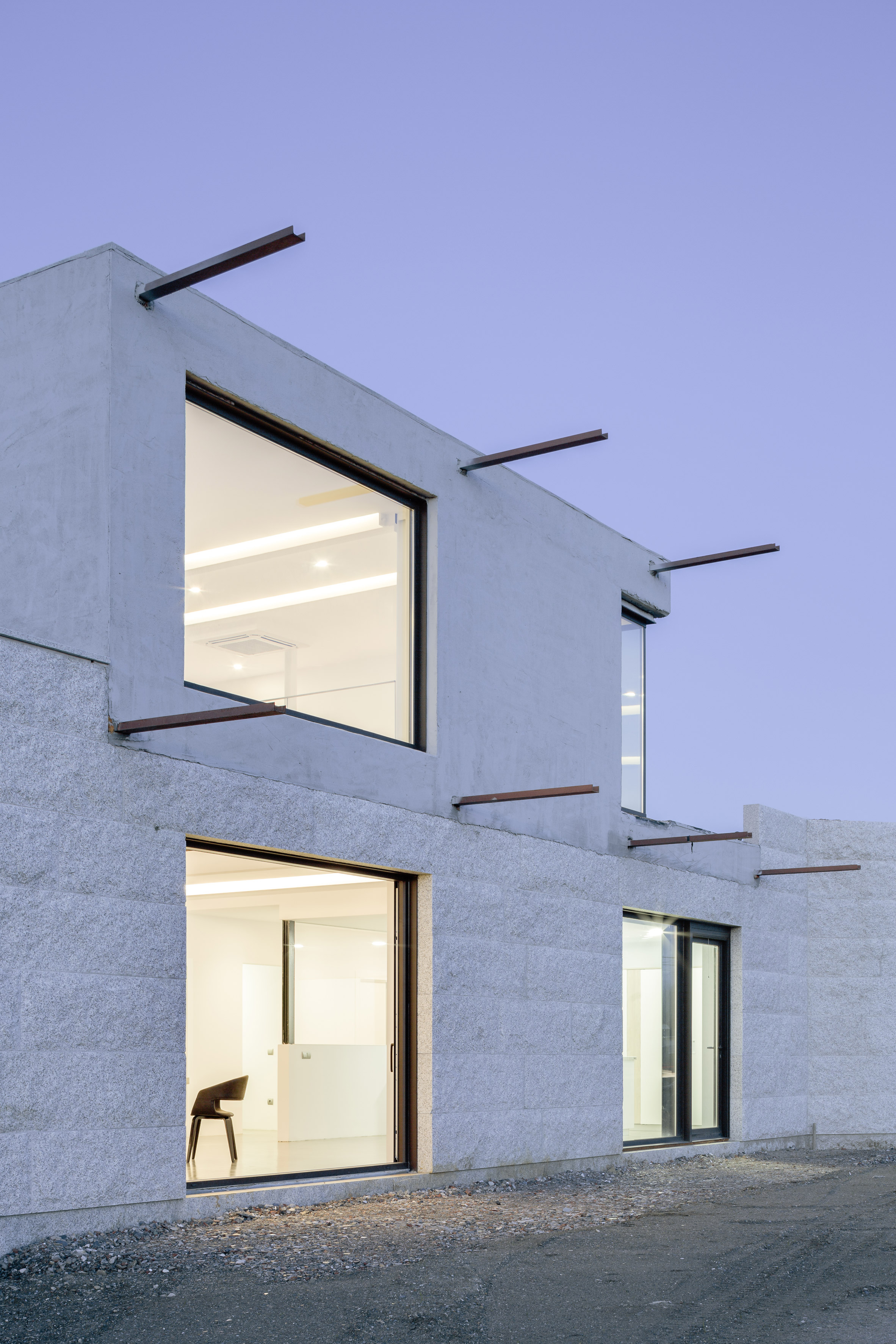 Huge blocks of pale granite used to clad the exterior of the ground floor lend the building a robust and rustic aesthetic. The beams that form part of the structural steel framework protrude out through the facades.

The house’s plan features two distinct axes that follow the boundaries of the site. Punctuated by large windows, sections of the facades have been staggered to break up the house’s monolithic composition. 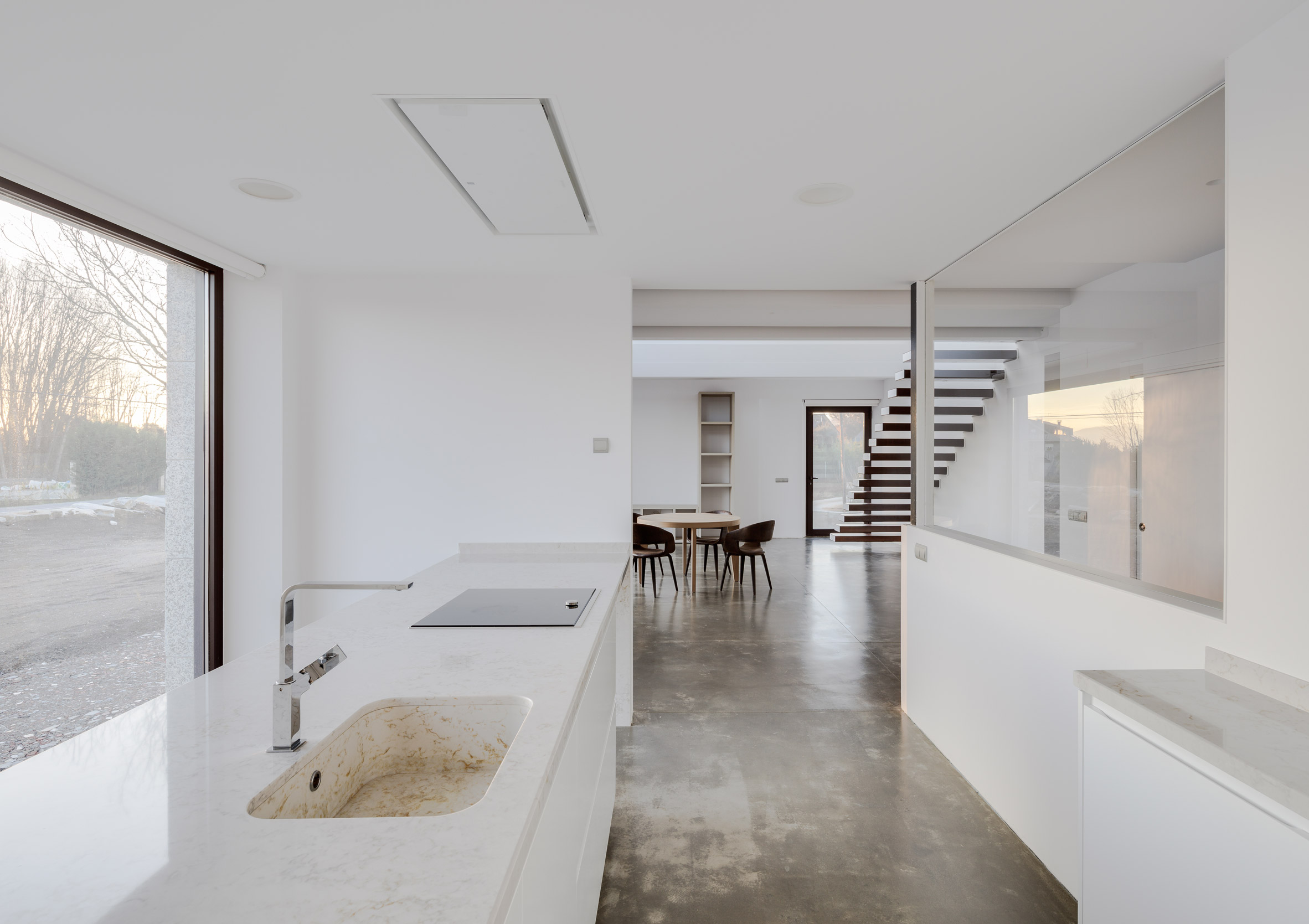 A pair of bedrooms and a garage are positioned along one edge, with the open-plan living, kitchen and dining area branching off at an angle.

The internal arrangement was informed by a desire to track the movement of the sun throughout the day. Bedrooms receive morning sunlight and a vertical opening in the western facade allows the dusk light to illuminate the living area. 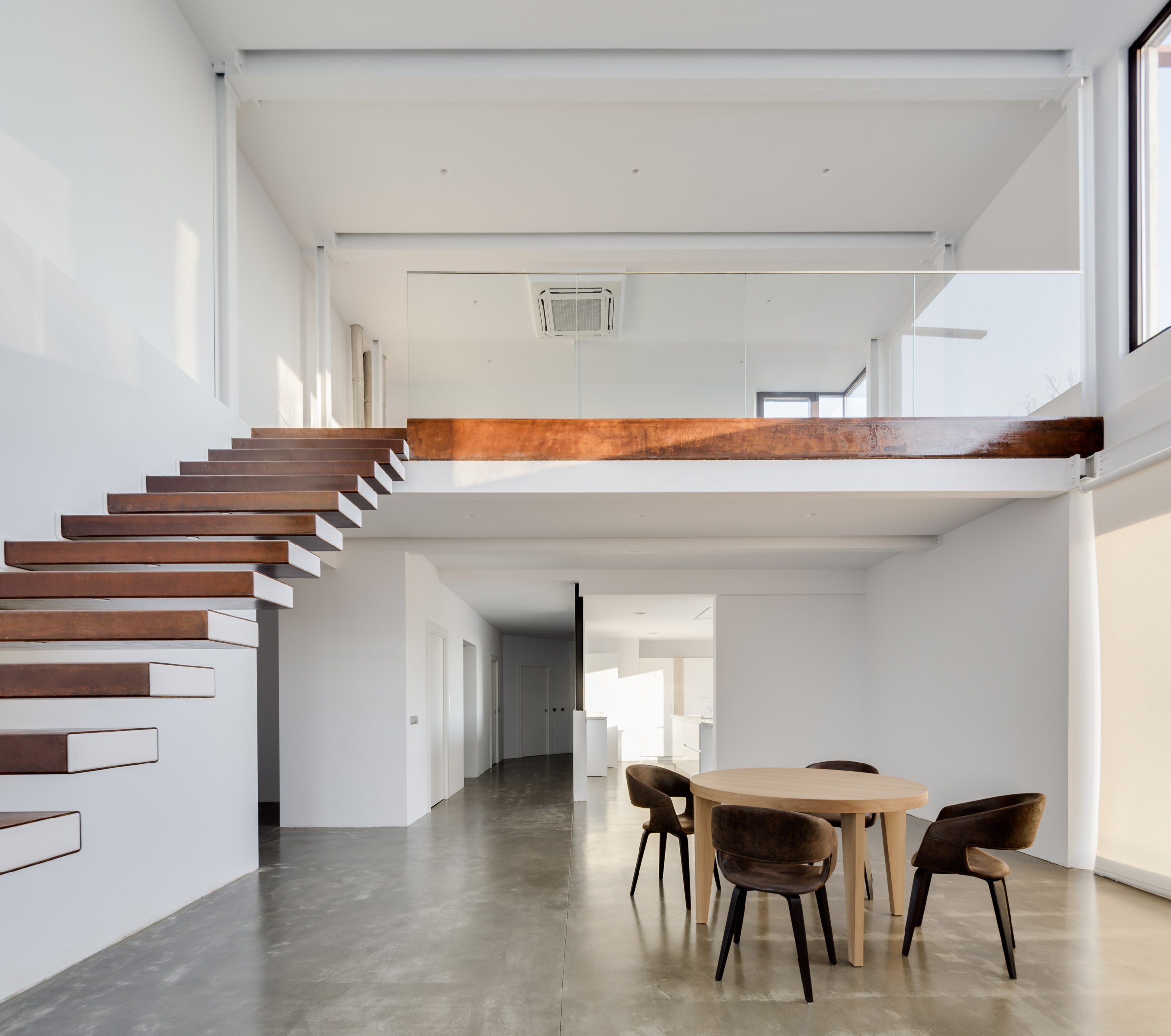 The cooler north facade contains the entrance and functional spaces including the garage, laundry and storage.

The south facade incorporates windows that frame views of the landscape from the kitchen, living room, dining area and a library accommodated on a mezzanine. 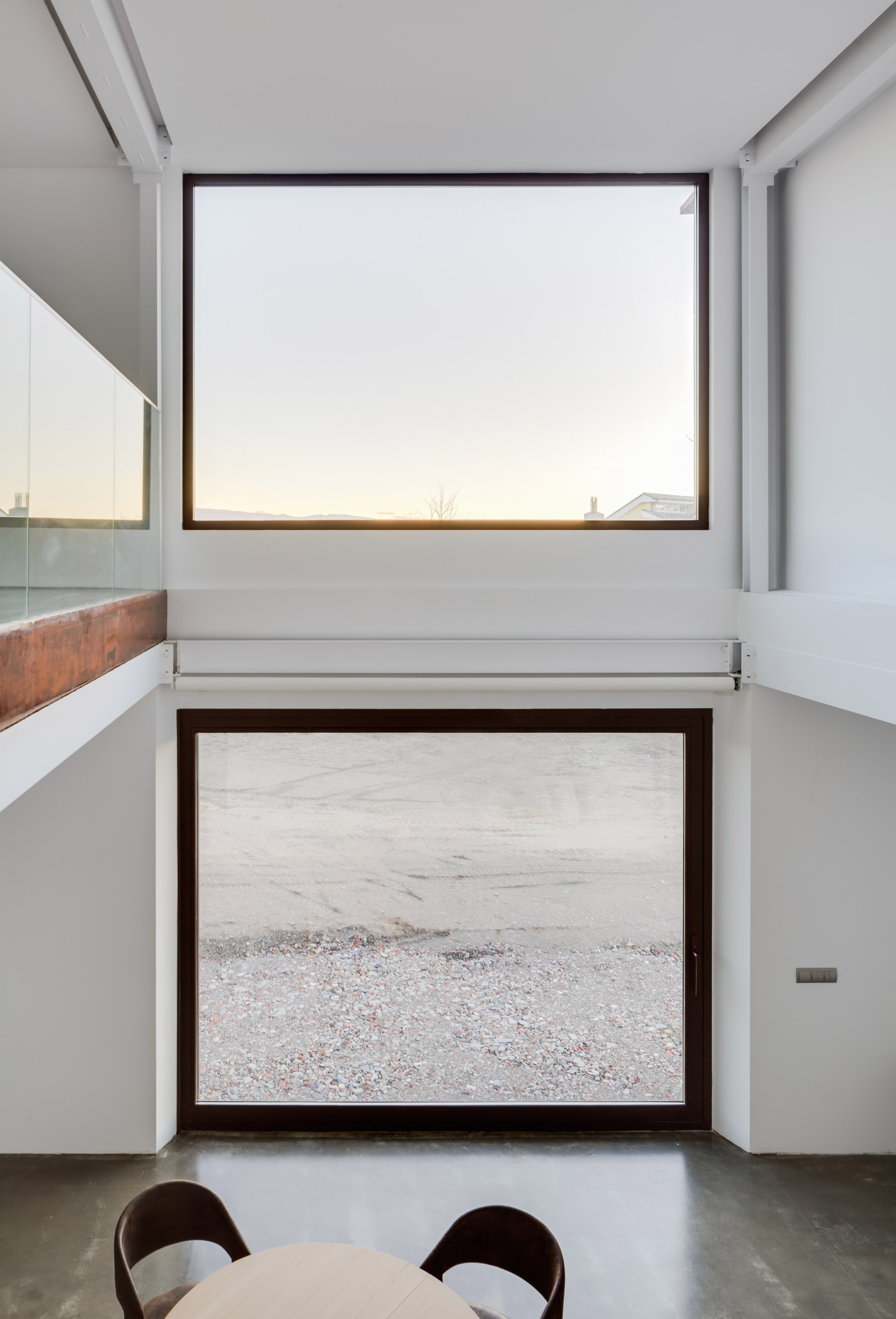 The library occupies an additional volume perched on top of the main living area. Its rendered exterior distinguishes it from the stone-clad lower level.

The mezzanine is reached by ascending a staircase featuring cantilevered treads that appear to hover above the concrete-floored living space.

“Since we started the models of the project, we loved the concept of creating a clean group of steel platforms to access the attic,” Miguélez told Dezeen. “The steps are linked to the structure using rusted steel.” 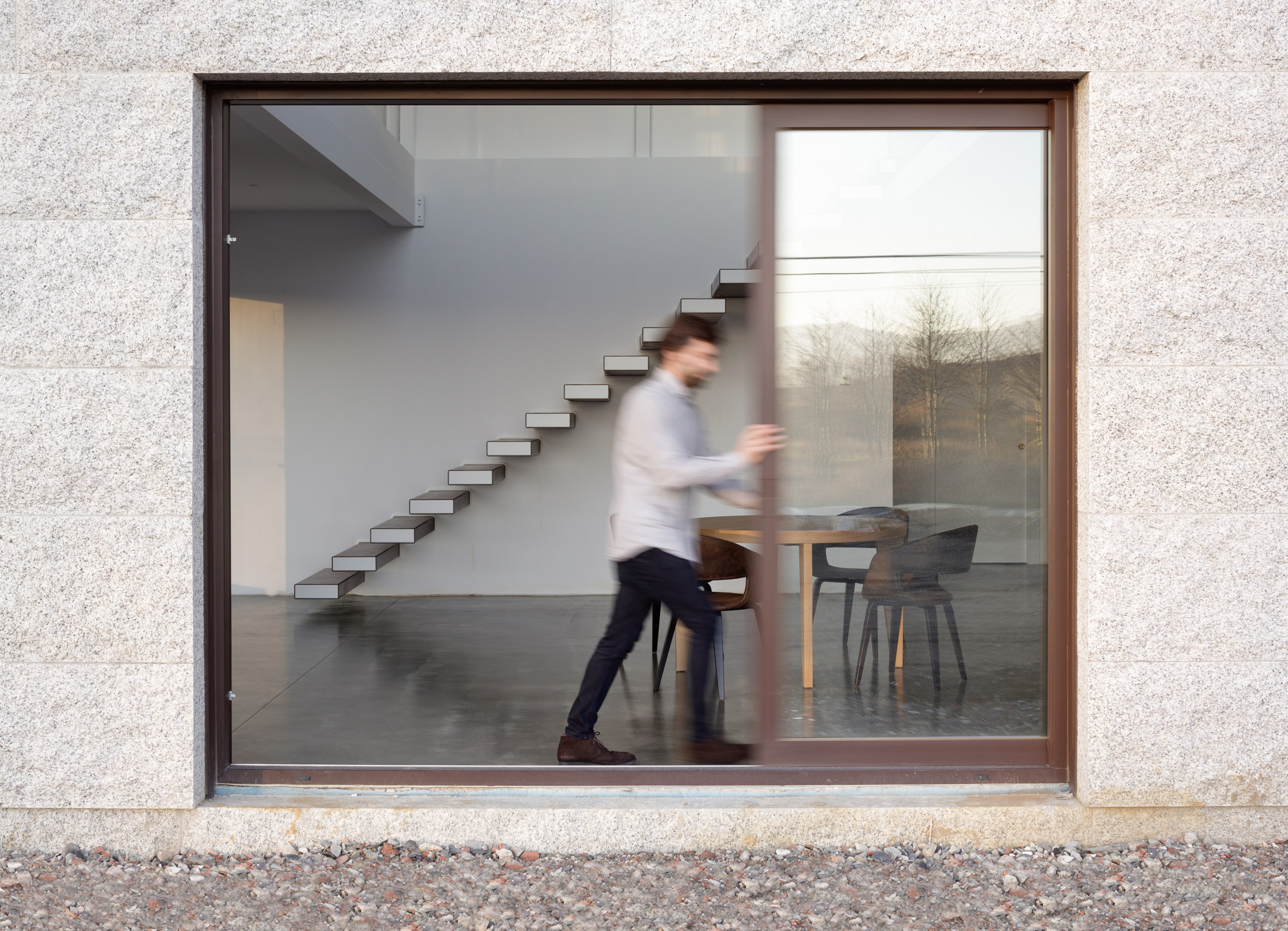 The mezzanine is lined with a glass balustrade that retains a visual connection with the rest of the interior. A door integrated in the library’s glazed southeast corner opens onto a green roof that offers thermal protection to the ground floor.

Photography is by Antonio Vázquez. 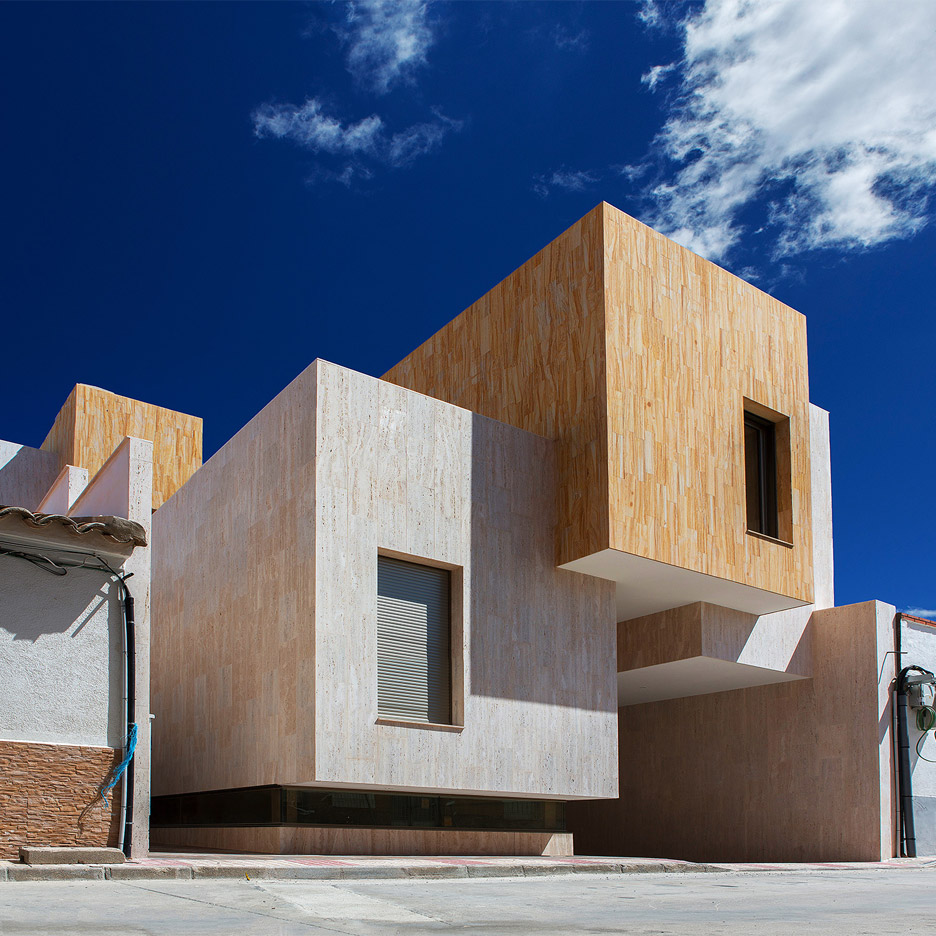 Other houses that feature floating staircases include a Ukrainian house by Azovskiy & Pahomova Architects, which features a staircase with cantilevered wooden treads, and a staircase with “wing-shaped” folded steel treads in a New York City apartment that was remodeled by Incorporated.