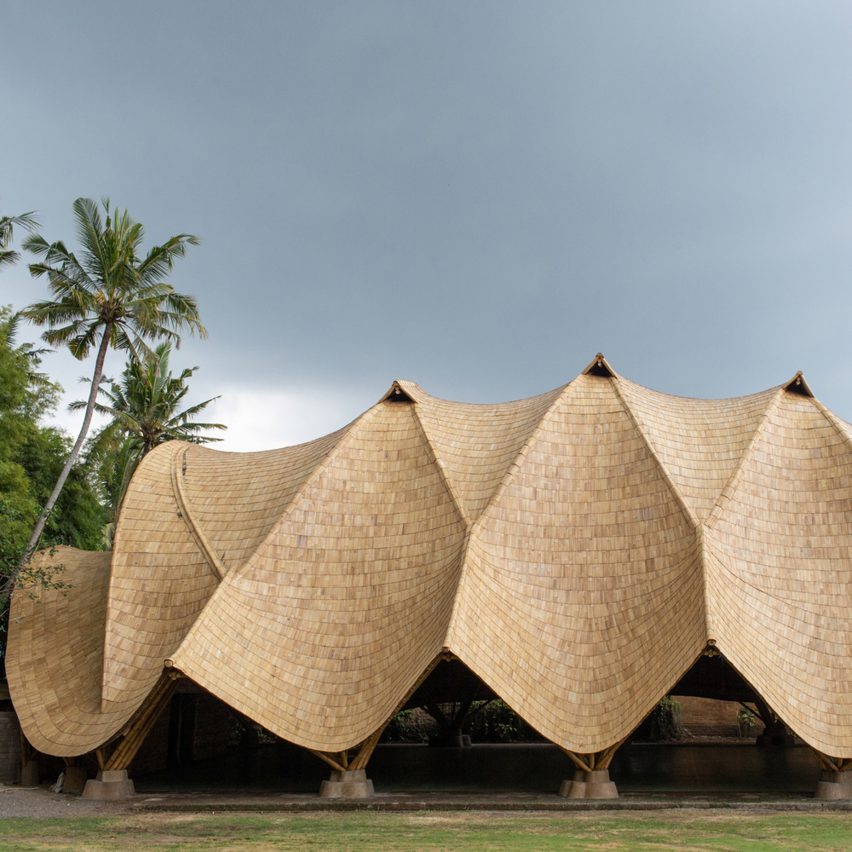 From a modular housing prototype to a disaster-proof yoga studio, we’ve rounded up 10 bamboo architectures from Dezeen’s archive that use the ancient construction material in new and unusual ways.

After being abandoned in favour of concrete and steel in the 20th century, bamboo is increasingly being integrated into modern buildings due to its lightness and flexibility.

Due to its rapid growth, the biomaterial is affordable, rapidly renewable and able to sequester large amounts of carbon from the atmosphere.

At the same time, researchers say its strength could make it a sustainable substitute for traditional rebars as well as creating structures that are resistant to natural disasters such as earthquakes and hurricanes.

“I think bamboo and laminated bamboo will replace other materials and become the ‘green steel’ of the 21st century,” Vietnamese architect Vo Trong Nghia told Dezeen.

Read on for a selection of projects that make the most of this versatile grass. 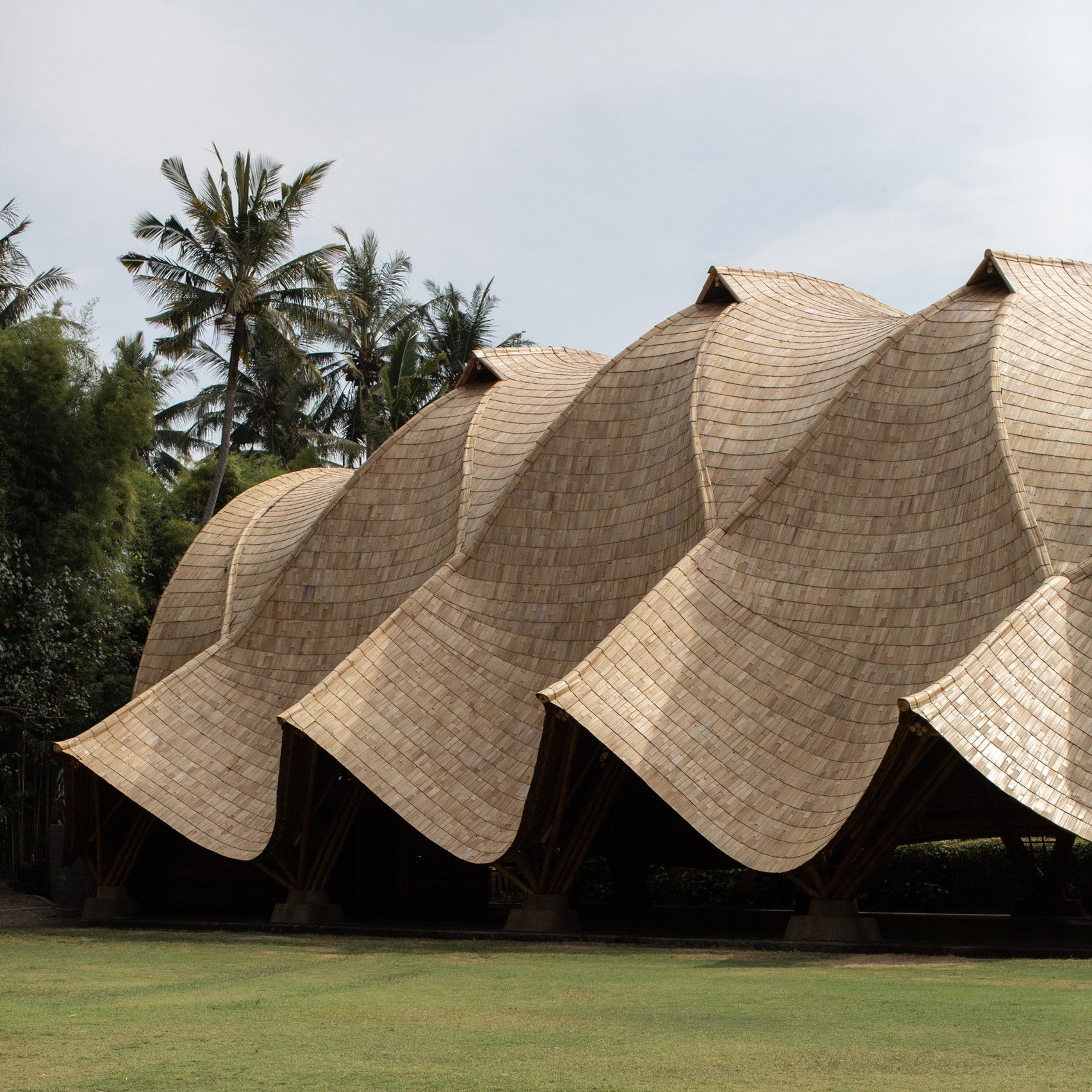 The Arc by Ibuku

Informed by the way the human ribcage is held in place by the tension from the surrounding muscles and skin, architecture studio Ibuku created a self-supporting roof made entirely from bamboo for the gymnasium of Bali’s Green School.

Composed of 14-metre-high cane arches connected by double-curved gridshells, the “unprecedented” structure is capable of enclosing a large area using minimal material while leaving the floor underneath uninterrupted by supporting columns.

Find out more about The Arc › 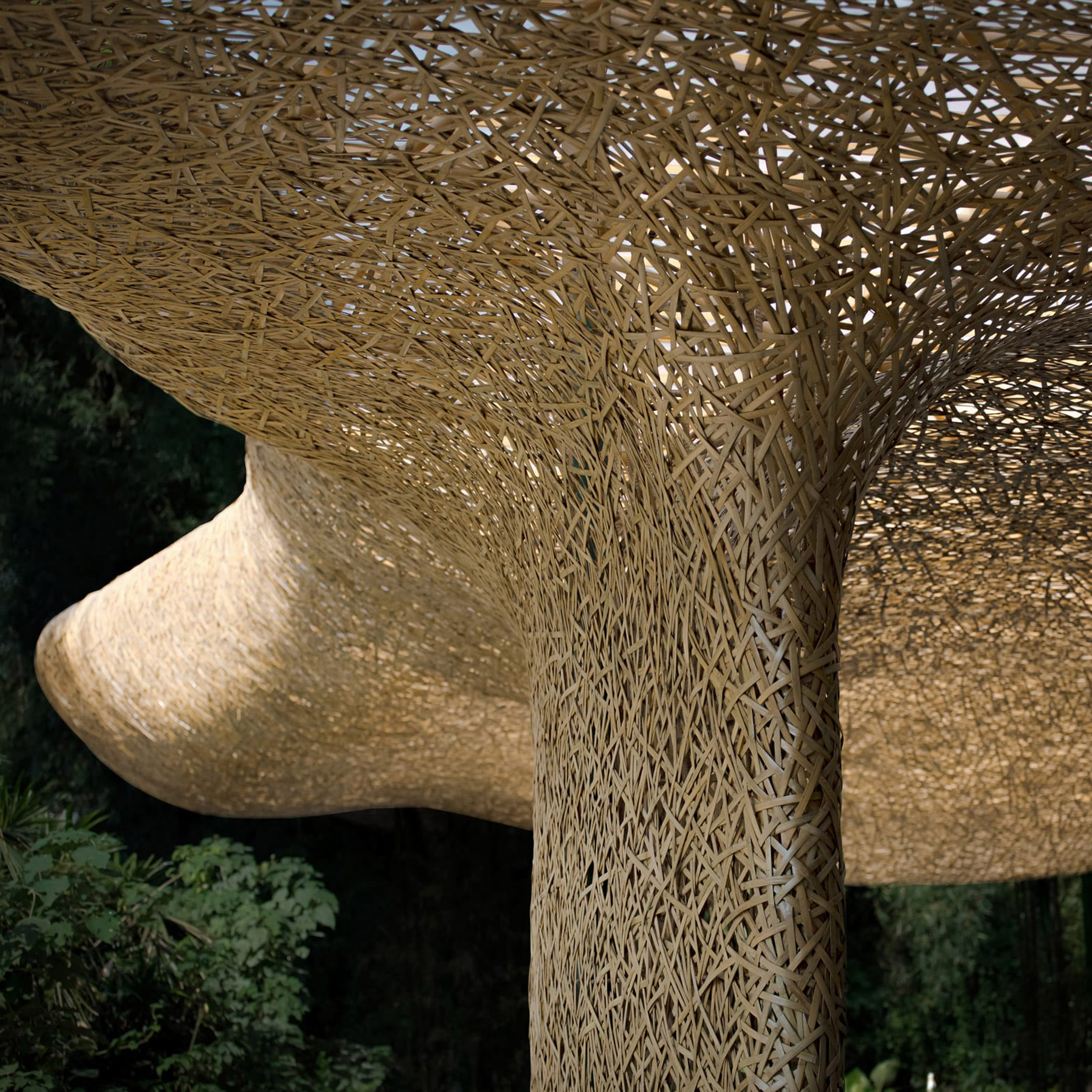 Bamboo strands are hand-woven to form this 140-metre-long canopy, which shelters visitors of the Impression Sanjie Liu light show on an island in Yangshuo’s Li River.

A number of spherical pavilions designed to resemble lanterns are finished in the same latticework and supported by load-bearing bamboo lengths that were soaked and scorched so they could be bent into shape.

Find out more about the installation › 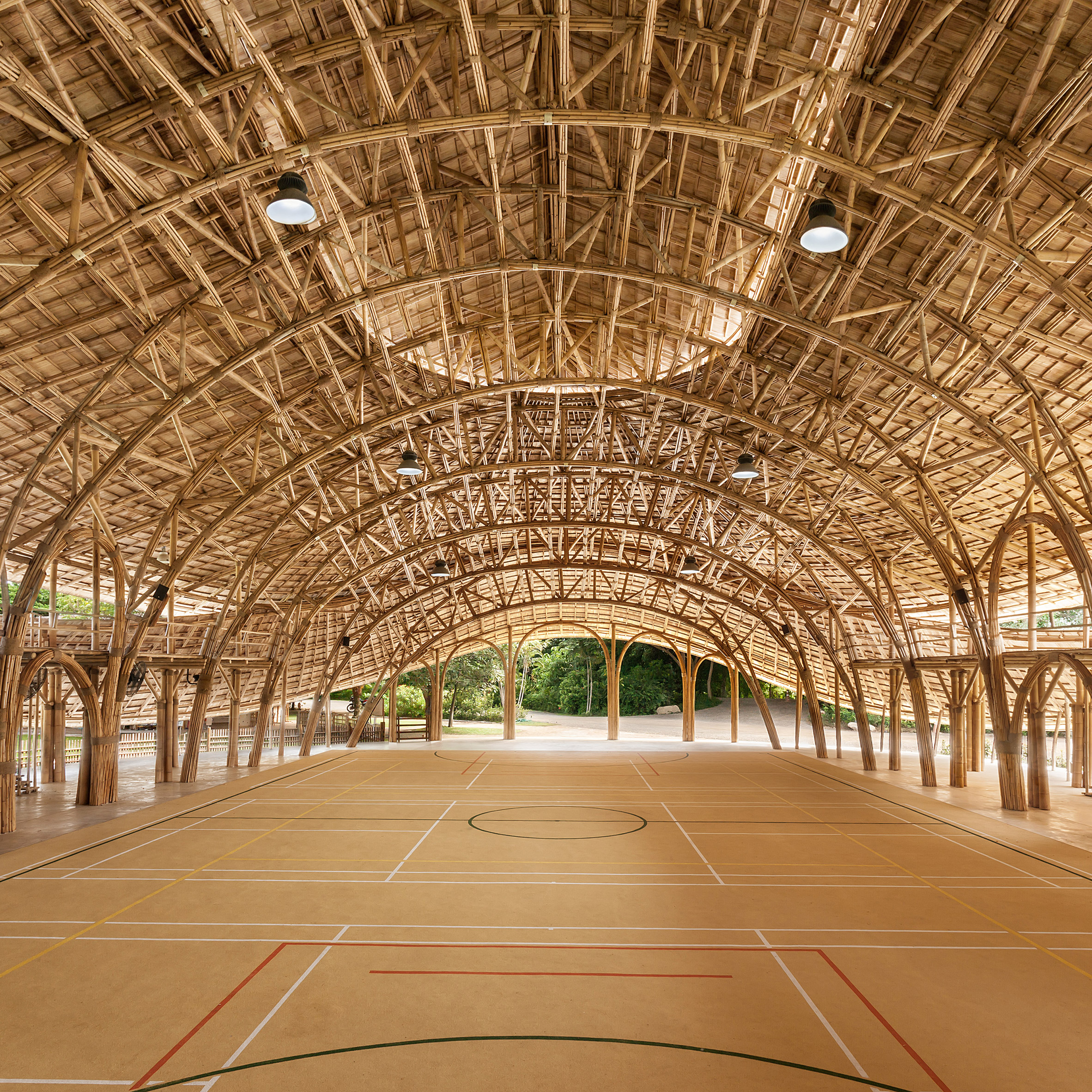 Sweeping, 17-metre trusses were prefabricated on-site and lifted into position using a crane to create a sports hall for Thailand’s Panyaden International School, set among rice fields on the outskirts of Chiang Mai.

An open lattice structure cuts out the need for air conditioning and by eschewing steel fixings in favour of rope, Chiangmai Life Architects and Construction claims it was able to create a building that absorbed more carbon in its materials than was emitted through its construction. 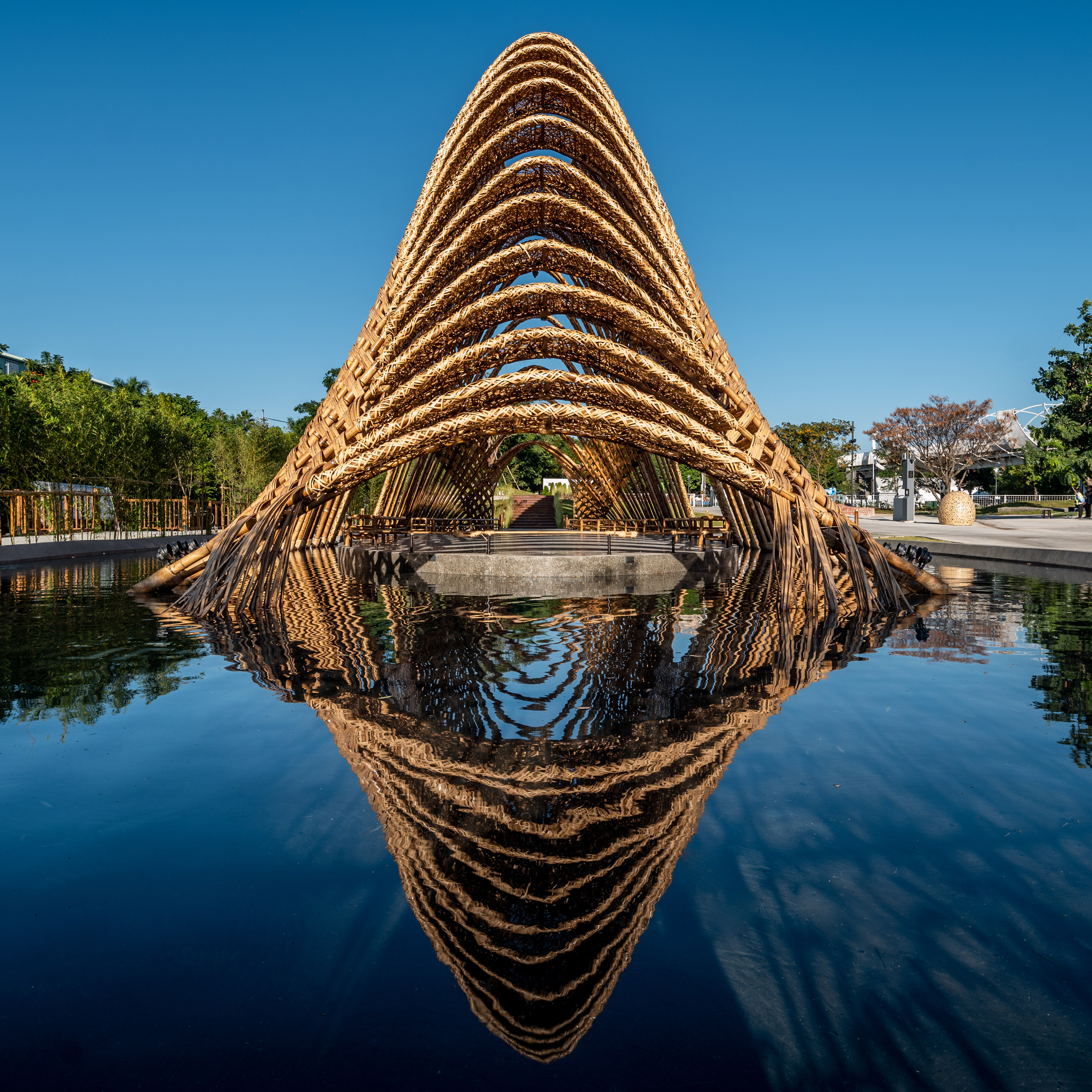 Taiwanese practice Zuo Studio designed this pavilion in Taichung to demonstrate how the low-carbon building material could offer “a more habitable environment to our next generation”.

Sourced from a total of 320 plants, its structure is formed from thick, hollow rods of Moso bamboo that are connected via smaller interlacing Makino bamboo segments.

Find out more about Bamboo Pavilion › 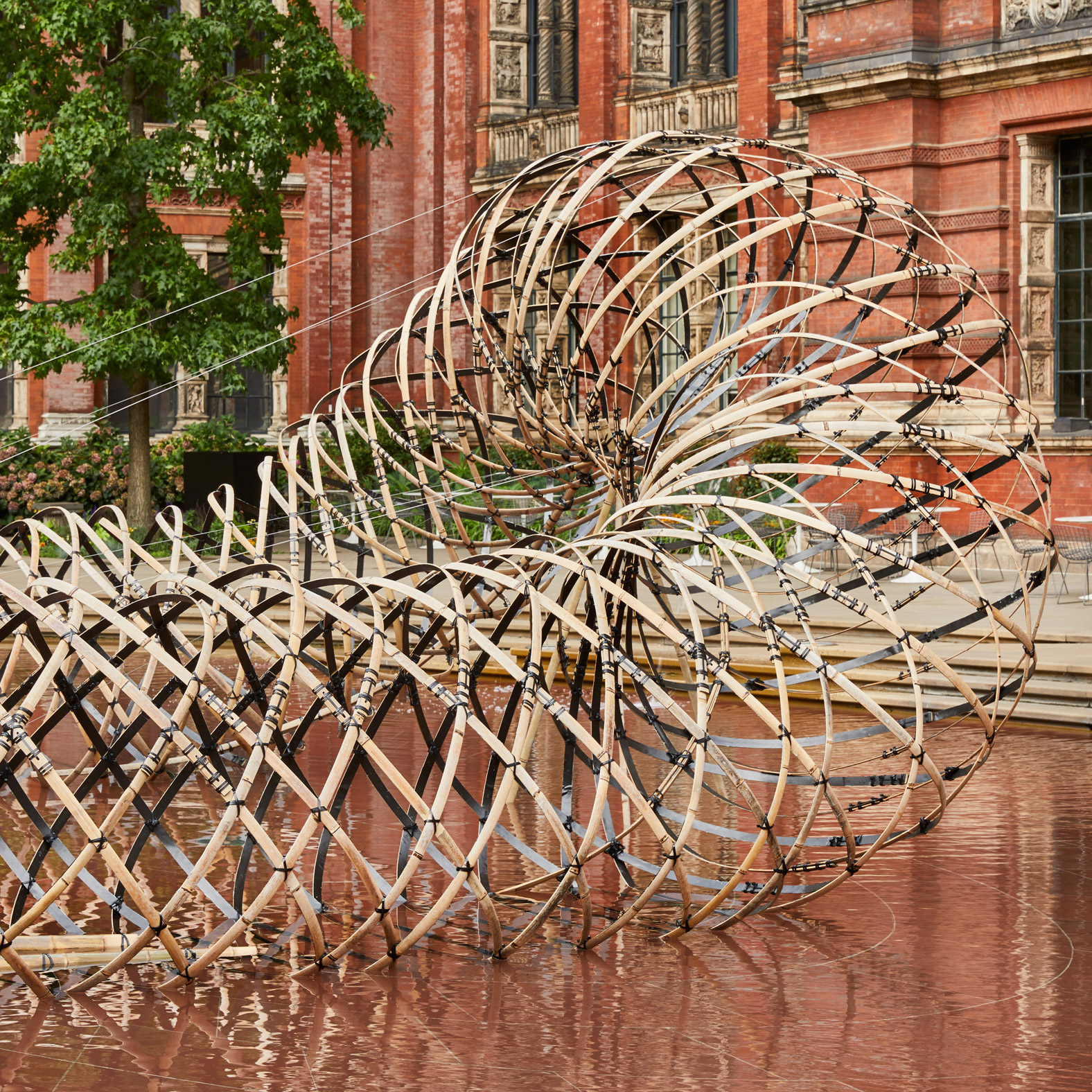 Kengo Kuma has described bamboo as the “material of the future” and combined it with carbon fibre to create a highly durable, self-supporting structure installed at the V&A for London Design Festival 2019.

According to Kuma, this kind of construction could help to create buildings that are capable of withstanding natural disasters such as the Great East Japan Earthquake in 2011.

“This is a new materiality that we can try to bring to the city,” he told Dezeen

Find out more about Bamboo Ring › 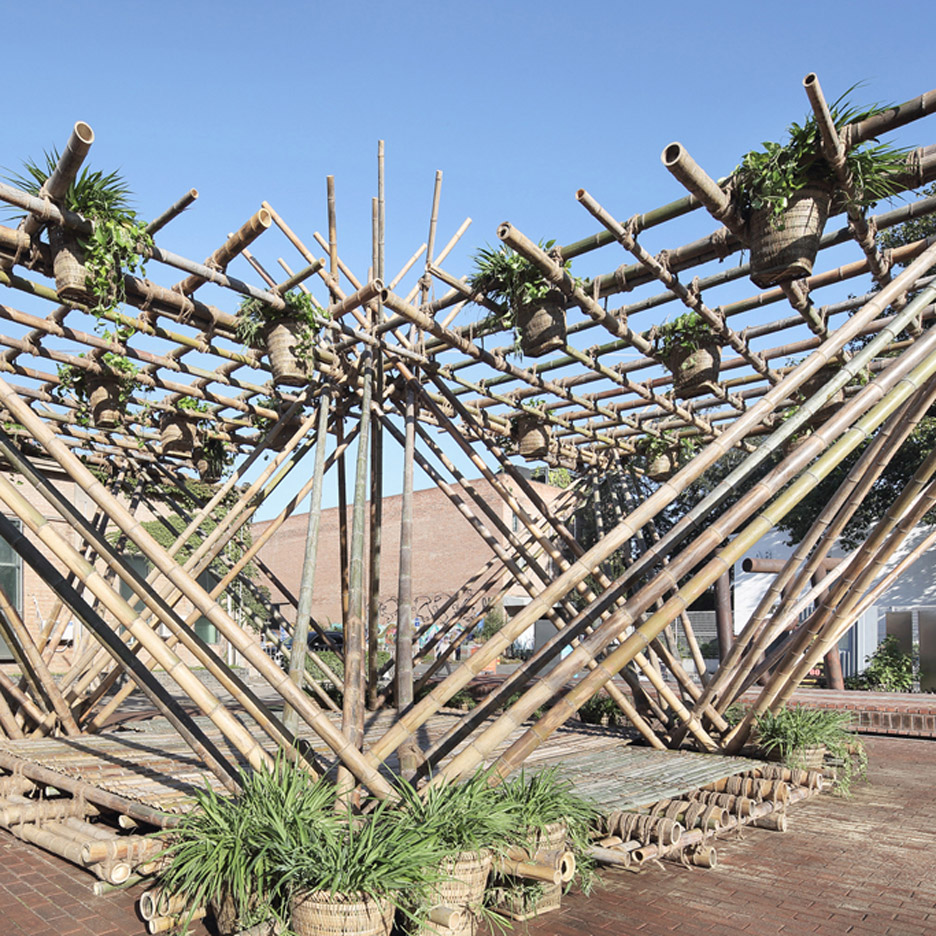 The Rising Canes pavilion was developed by architecture studio Penda to showcase modular bamboo construction, which the practice said could be used to form emergency housing, portable hotels and even an entire sustainable city for 200,000 people.

Exhibited at Beijing Design Week, the prototype sees vertical and horizontal stems connected via X-shaped joints of the same material to create interlocking building blocks. These could be expanded in every direction, allowing architecture to grow with its inhabitants.

“The structure could grow as tall as the trees,” Precht told Dezeen.

Find out more about Rising Canes › 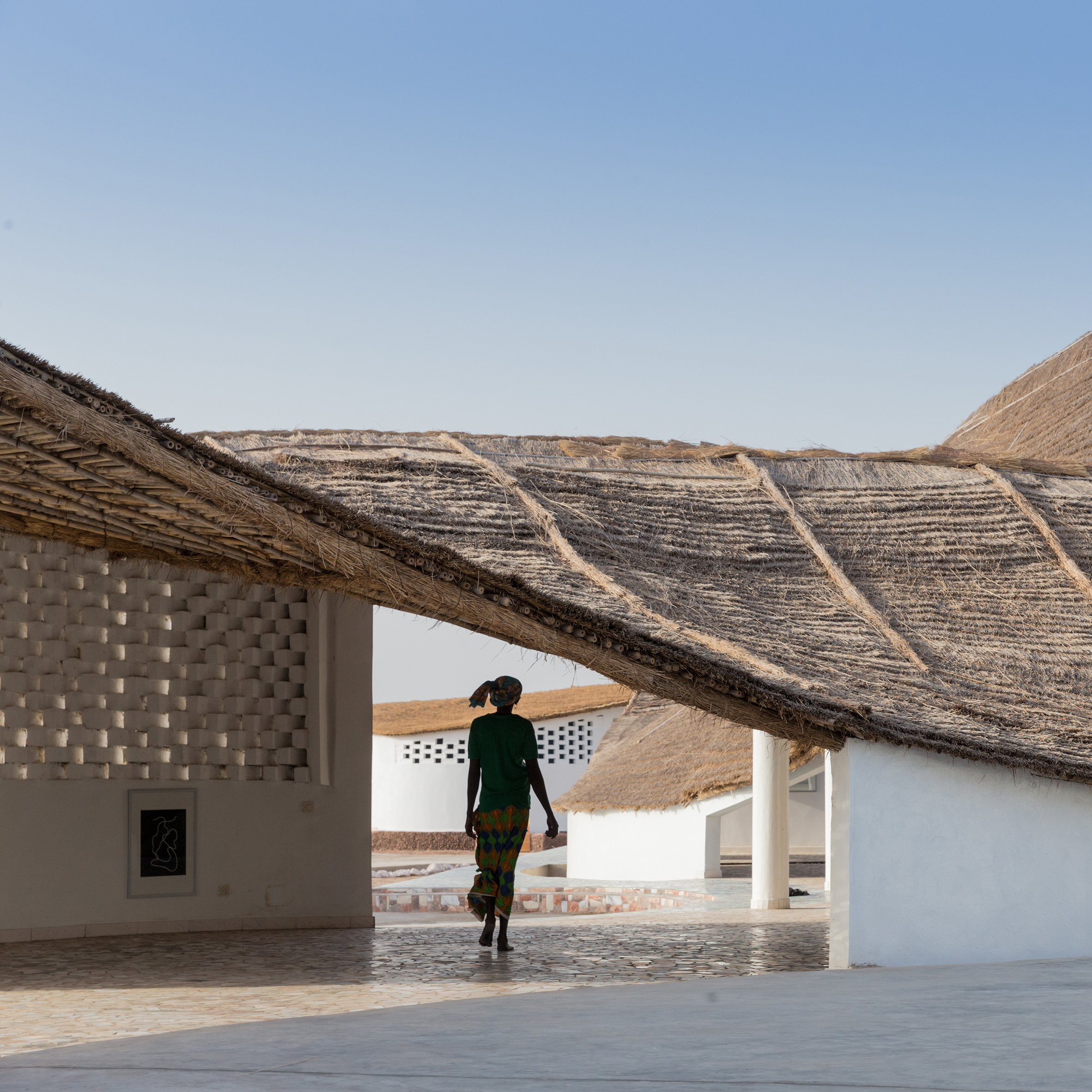 An undulating canopy drapes and folds itself over the whitewashed buildings of this cultural hub in Senegal, designed by Japanese architect Toshiko Mori.

Its flexible bamboo structure helps to create a fluid, modern reinterpretation of a traditional thatched roof, which encircles a number of open-air courtyards.

Find out more about Thread › 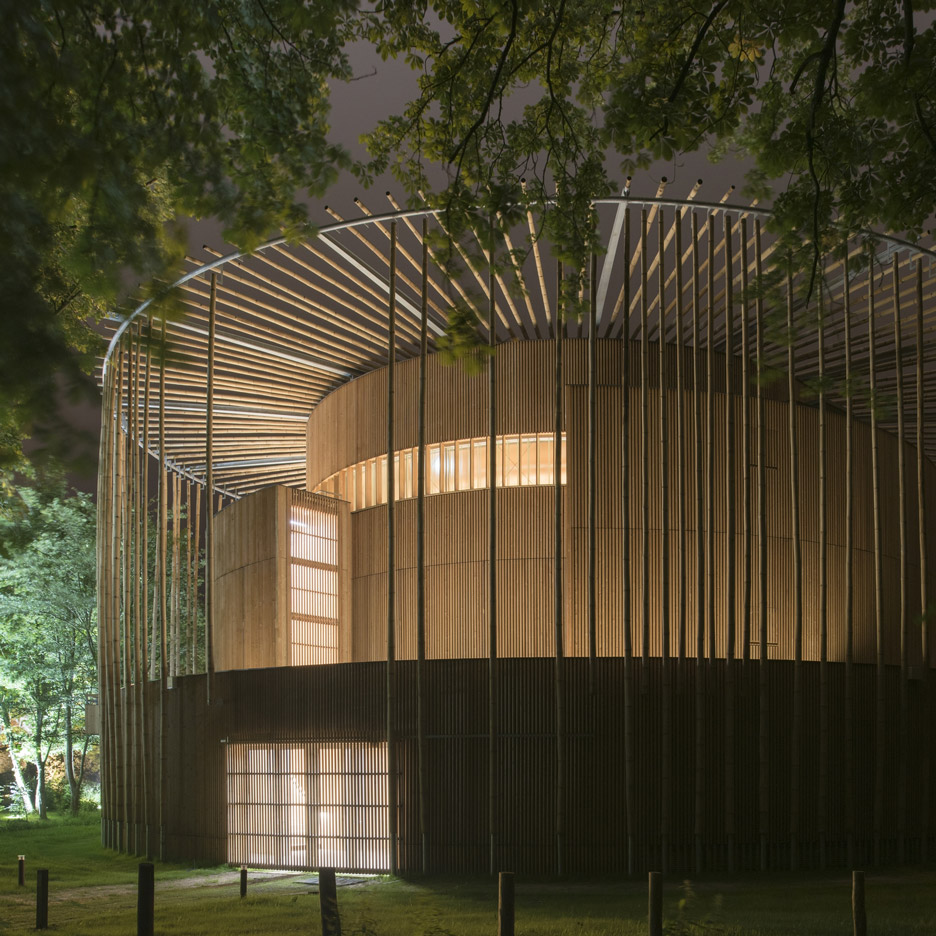 Twelve-metre-high poles of bamboo encircle the cylindrical Hardelot Theatre near Calais, creating a cage-like exterior and a radiating pattern that emanates from its roof.

This gridded structure is mirrored in the slatted timber panelling of the playhouse, which was designed as a homage to Shakespeare’s Globe Theatre.

Find out more about the Hardelot Theatre › 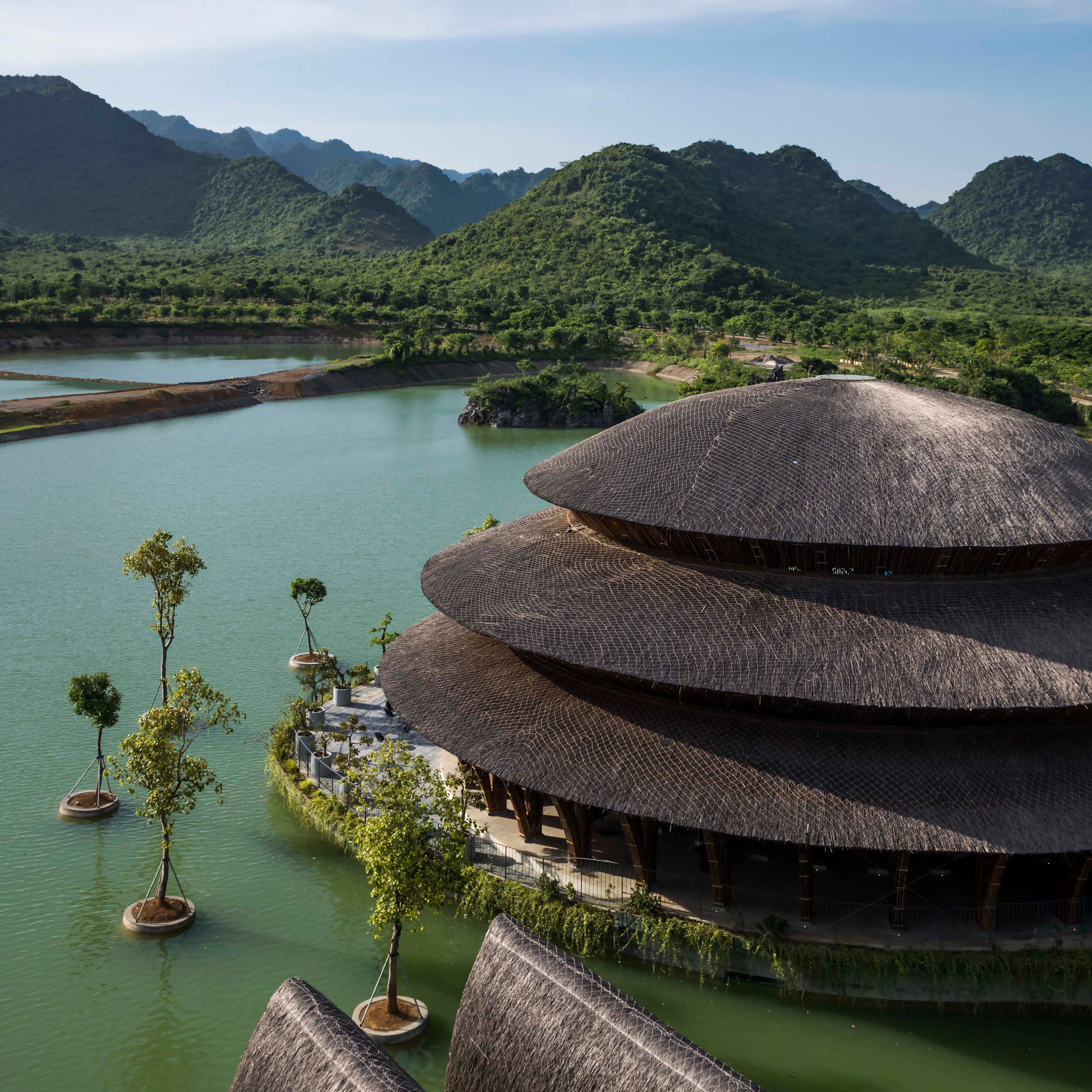 Although the towering roof of Nghia‘s Vedana Restaurant appears to be formed from three thatched gables, the dome is actually a single structure formed from 36 bamboo modules.

This fact is revealed only on the interior, where the intersecting rods are left exposed and form a spiralling mandala pattern across the cavernous ceiling.

“It is not easy to create beautiful spaces by using bamboo because it is an uneven material,” Nghia said. “We try to control the accuracy of the construction by applying unit-frame prefabrication.”

Find out more about the Vedana Restaurant › 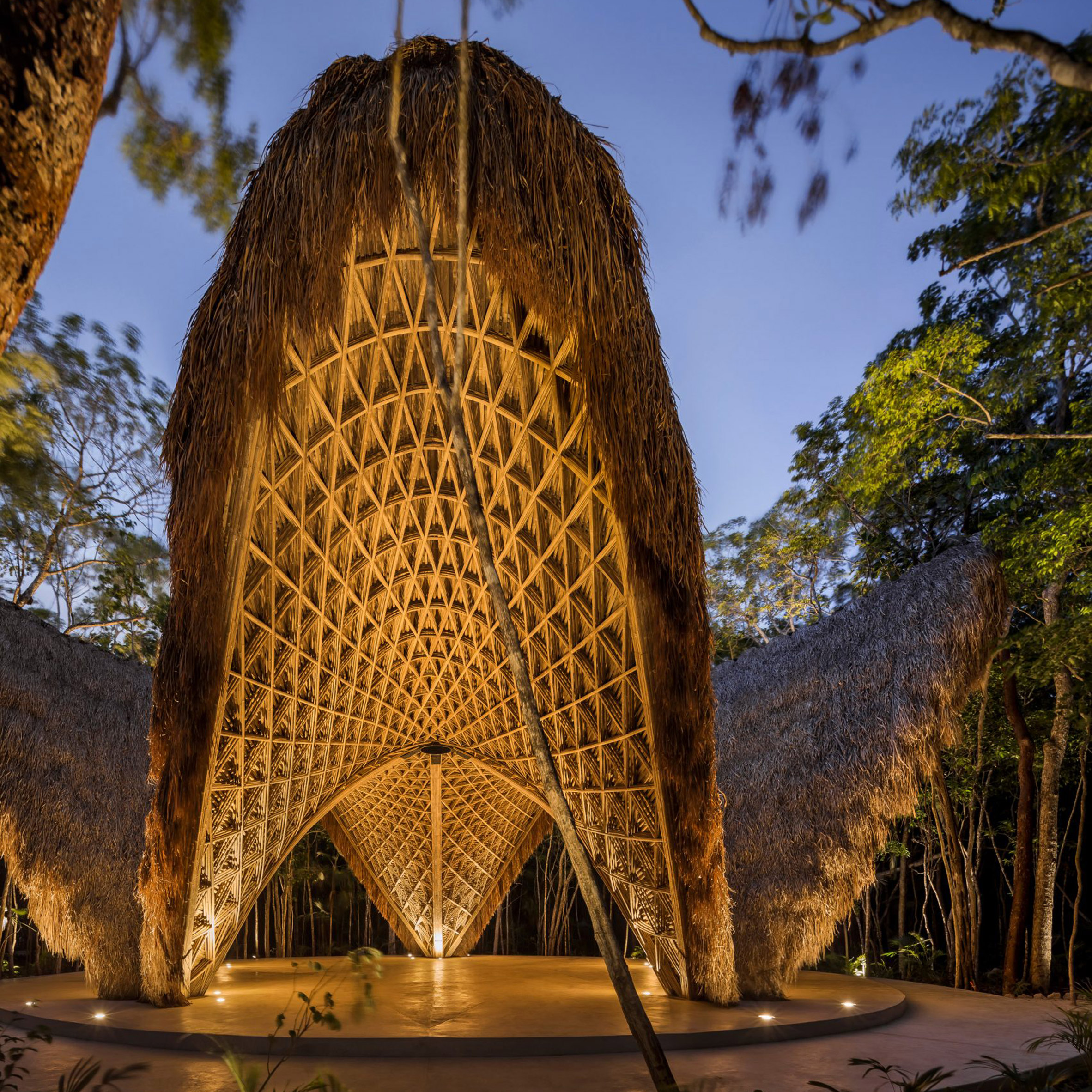 Luum yoga studio in the jungles of Tulum is formed from five parametrically designed arches, woven together by a structural triangular pattern and bound by two layers of lattice to create a structure that is able to resist hurricane forces.

“Due to the carbon bamboo sequesters during its rapid harvest growth cycle, and its high strength to weight ratio, bamboo is a leading sustainable material with amazing potentials,” CO-LAB Design Office said.

Find out more about Luum Temple ›