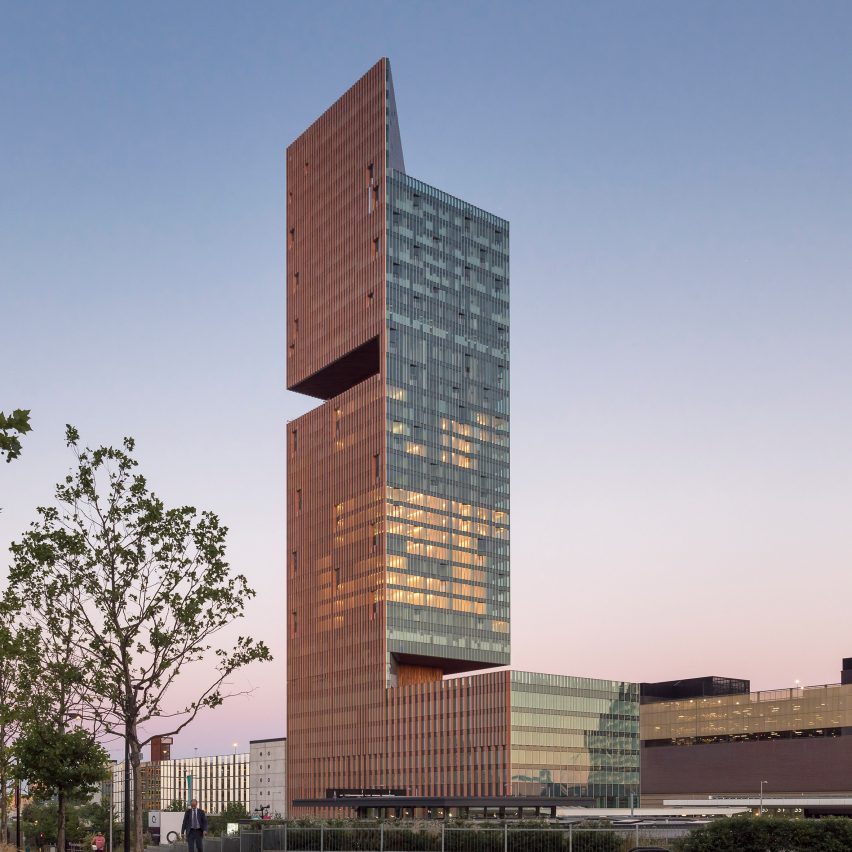 Skidmore Owings & Merrill (SOM) engineered the concrete and steel frame so that it could accommodate three sky-gardens notched into the 42-storey building.

Most of the floors of Manhattan Loft Gardens are supported by a cantilevered perimeter truss system at levels 10 and 28.

This means that half of the columns could be removed to create open spaces within the tower, which stands on top of a rectangular podium.

“The way in which we settled on the overall form of the building was really a balancing act,” said Kent Jackson, design partner at SOM.

“Literally between the structure having to balance out the different parts of the cantilevered building so that they weighed each other out.”

The post-tensioning methods required to achieved this, said the architects, required engineering on a scale usually reserved for infrastructure projects.

Manhattan Loft Gardens is located in Stratford, east London, at the edge of the Queen Elizabeth Olympic Park were the 2012 games were held.

The development of 248 apartments has a mix of 13 typologies, plus a hotel, and “destination restaurants”.

It has been reported that the former head chef of Marylebone’s Chiltern Firehouse will be opening a restaurant on the seventh floor.

Lofts can be booked for short stays between seven days and three months, or longer term tenancies of six to 12 months.

Sky gardens on the seventh, 25th and 36th stories will have wildflower gardens, barbecue zones and party areas complete with bars.  Timber panelling clads the underside of the overhanging levels.

SOM, which was founded in 1936 by Louis Skidmore and Nathaniel Owings, has another tower planned for London – a 56-storey tower topped with a viewing gallery planned for the City called The Diamond.

Main image is by Alex Upton, others by Ed Reeve unless otherwise stated.