Canadian studio Omar Gandhi Architects has chosen an all-white palette for the interior of a clothing boutique in its home city of Halifax.

Rchmnd (pronounced Richmond) is a multi-brand fashion retail company based in Halifax, Canada. Its store occupies a narrow ground floor space in the city’s historic Granville block – recently revitalised as a cultural hub. 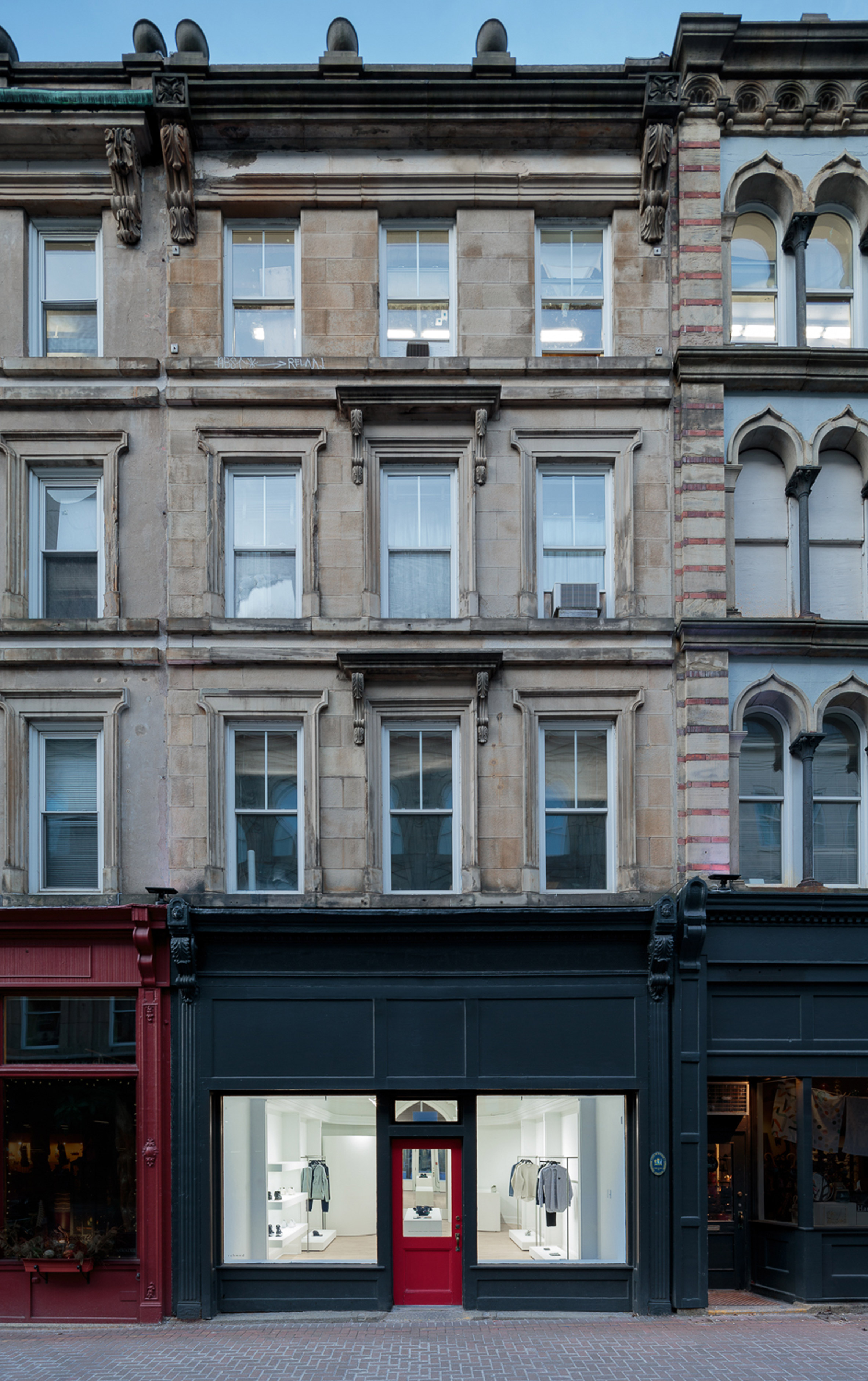 The design concept sought to pay homage to the neighbourhood’s architectural styles, while conveying the brand’s pared-back aesthetic.

“During the design process of the physical space, great emphasis was placed on respecting and celebrating the historic building’s character,” said Omar Gandhi Architects.

From the outside, glazing frames products displayed on white millwork – giving visitors the impression of a minimal, monochromatic space. 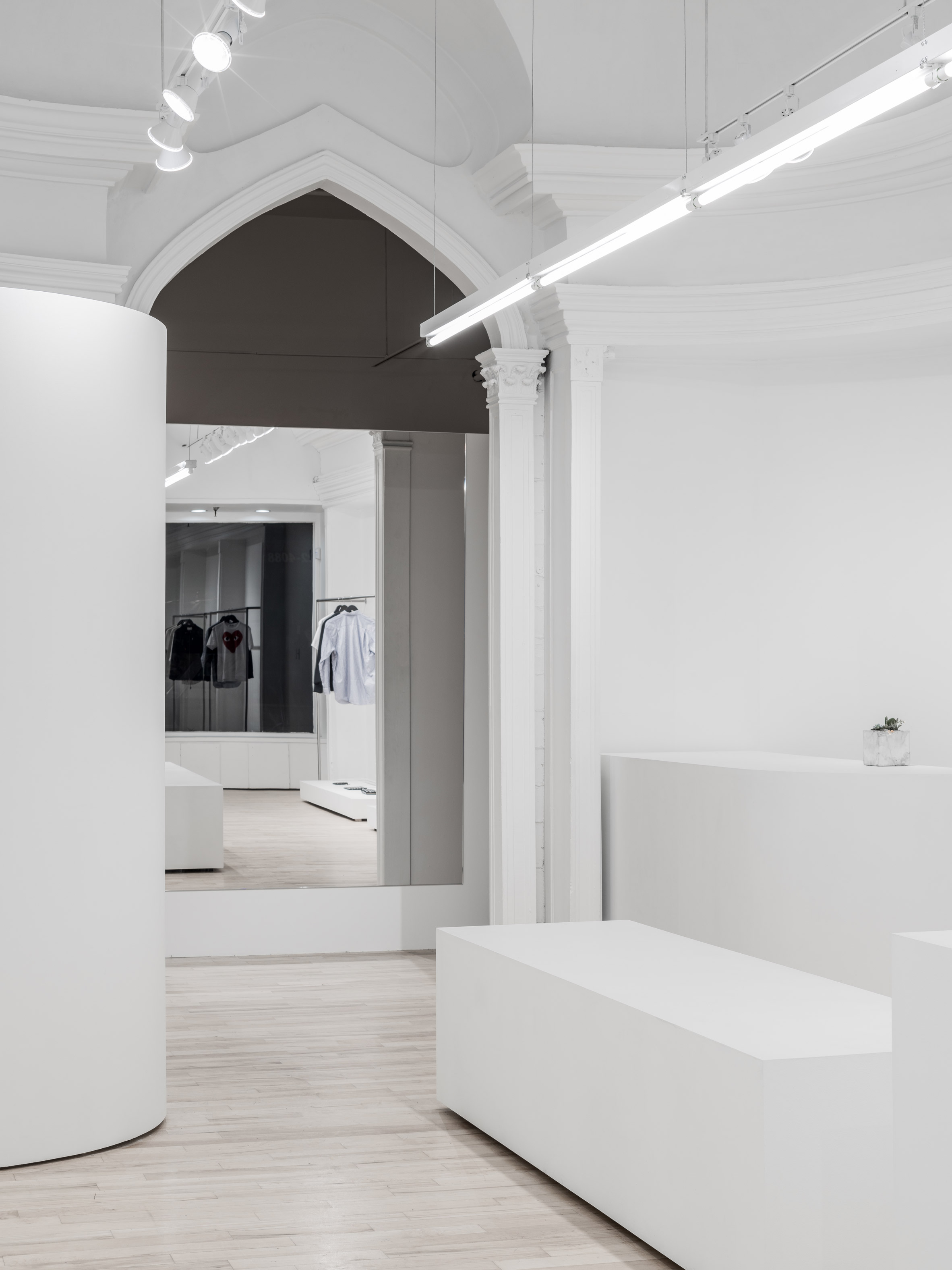 Along both walls, recessed cavities provide room to hang clothing or place shelves.

The spaces are separated by shallow partitions, resembling columns in high-relief against the walls. 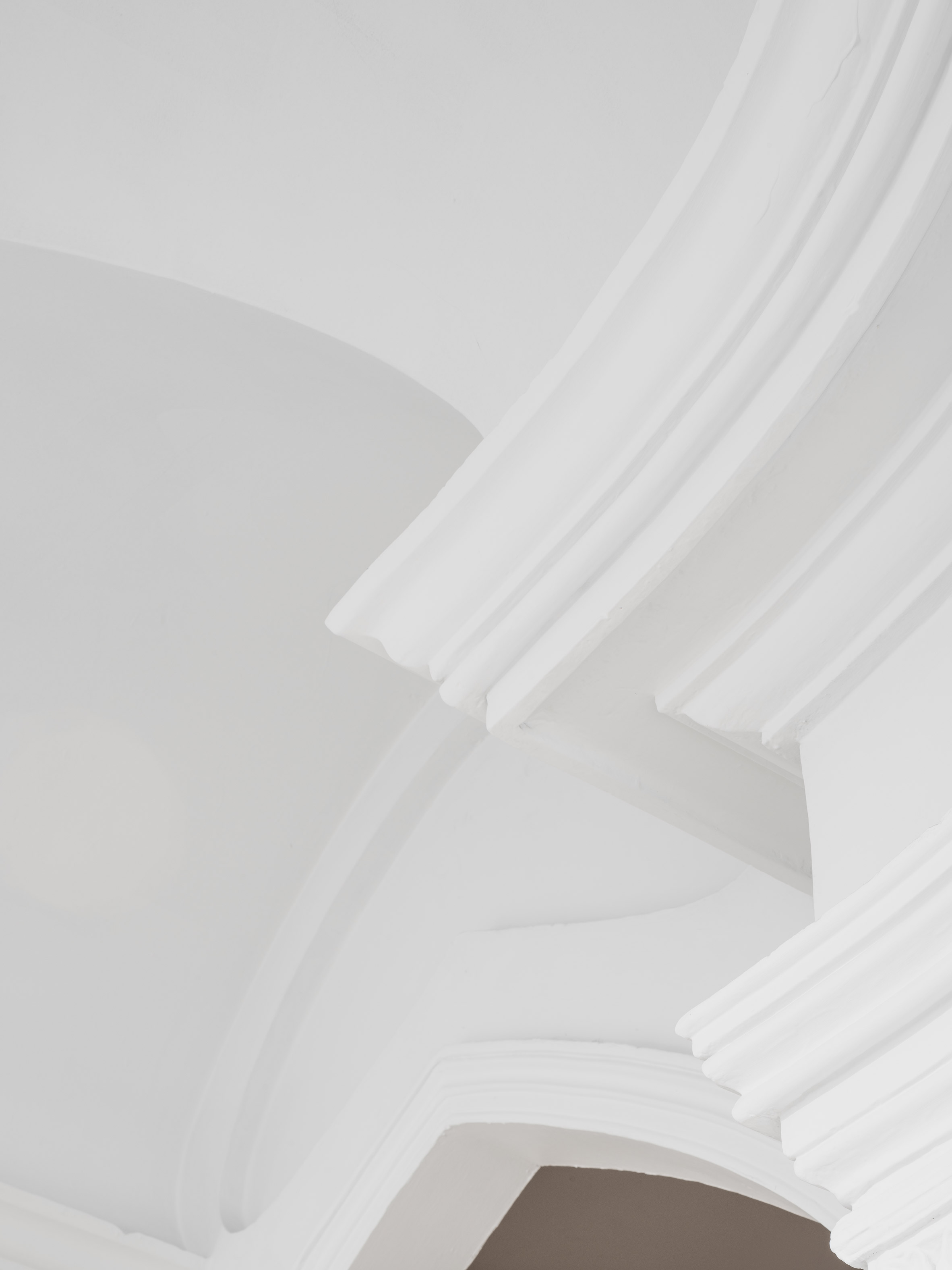 Capitals along their upper register flow into elaborate, double-tiered mouldings along the ceiling.

The cornices stop short of an archway, the form of which is echoed above twice – first engraved, and then again as a hollow in the upper wall. 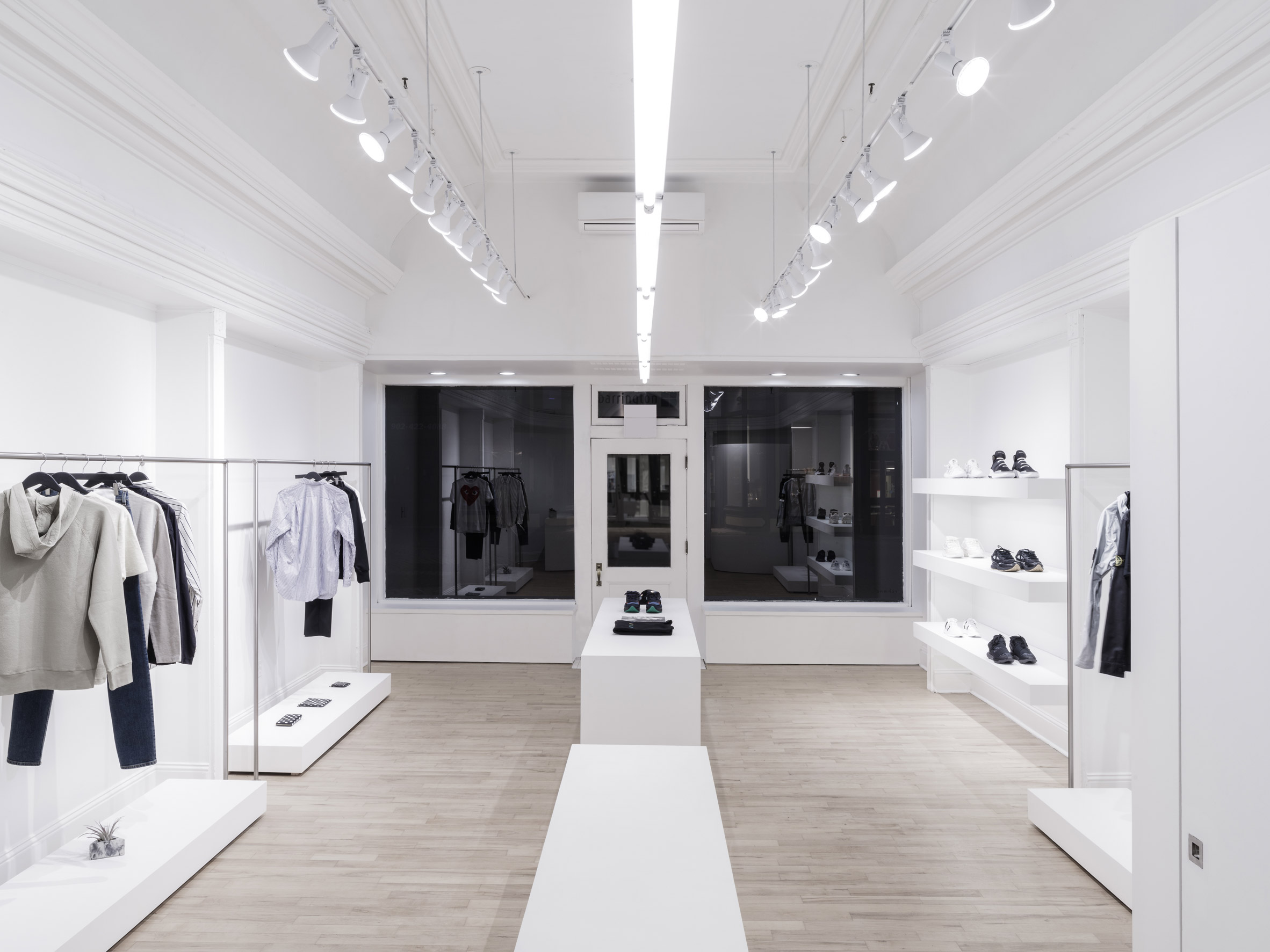 Along the store’s midline, display benches and the open archway follow the same axis as the glazed entrance. A mirror on the rear wall gives the impression of an extended space past the archway, even when viewed from outside.

Minimalism is a popular choice for fashion boutiques. Others that also make use of a monochromatic palette include John Pawson’s design for British fashion designer Christopher Kane’s first physical retail space, Beige’s Tokyo concept store by Nendo, and a clothing shop in Porto designed by local studio Fala Atelier. 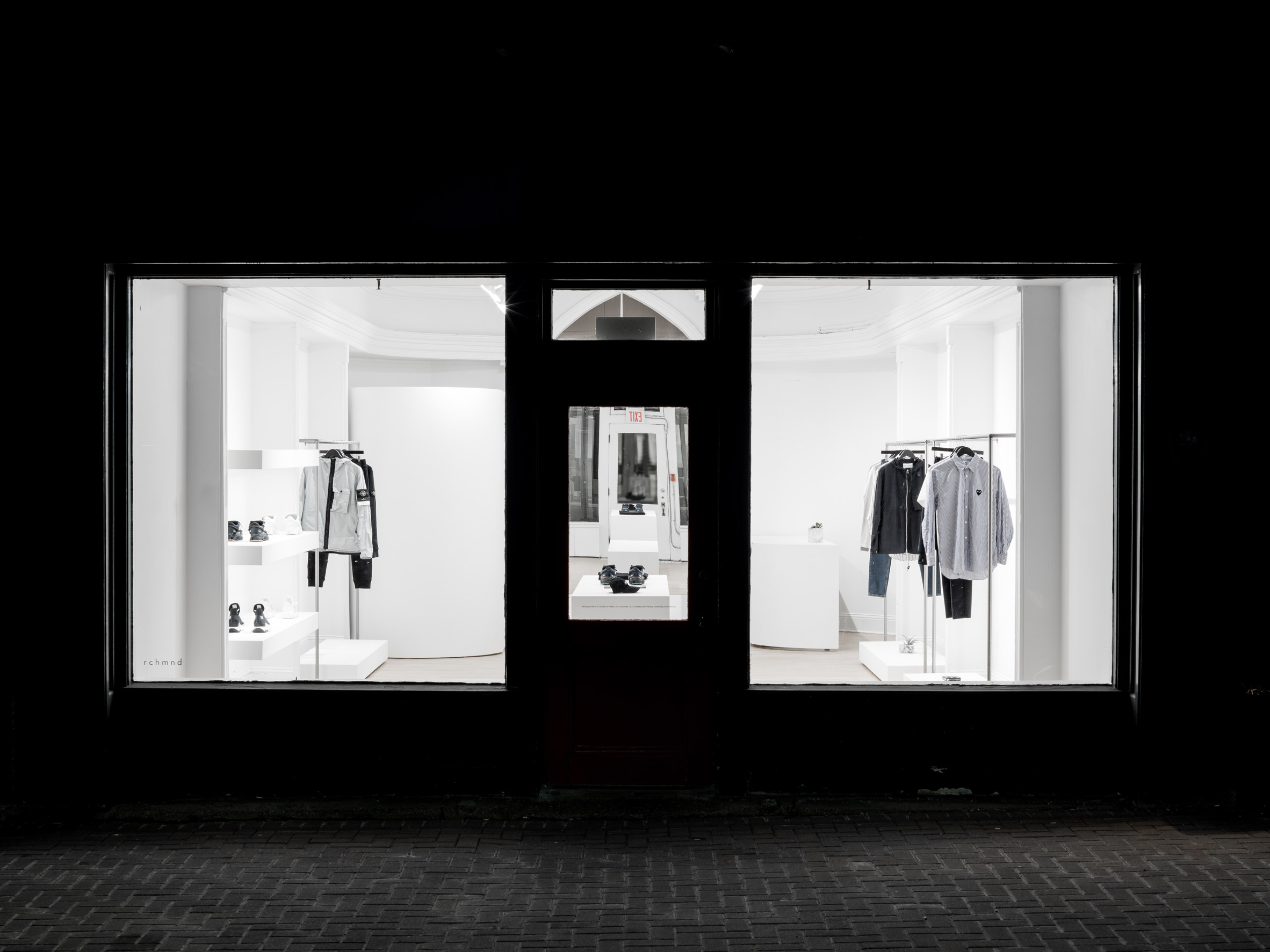 Omar Gandhi Architects has recently completed several buildings in Nova Scotia that feature similarly pared-back designs, including a slender cabin that stands on a bluff and a holiday home perched on a rocky cliff.

Photography is by Format Films.

10 of the most minimal boutiques on Dezeen