Dezeen promotion: designers Barber and Osgerby, Konstantin Grcic and Sevil Peach explore what the office of today looks like in an exhibition for furniture brand Vitra.

WORK, which is on show at the Orgatec office furniture fair in Cologne, features three fictional offices that showcase the diversity of today’s workplaces.

They include a co-working space for nomadic workers, a flexible office that can transform overnight and an HQ that focuses as much on wellbeing as it does on productivity. 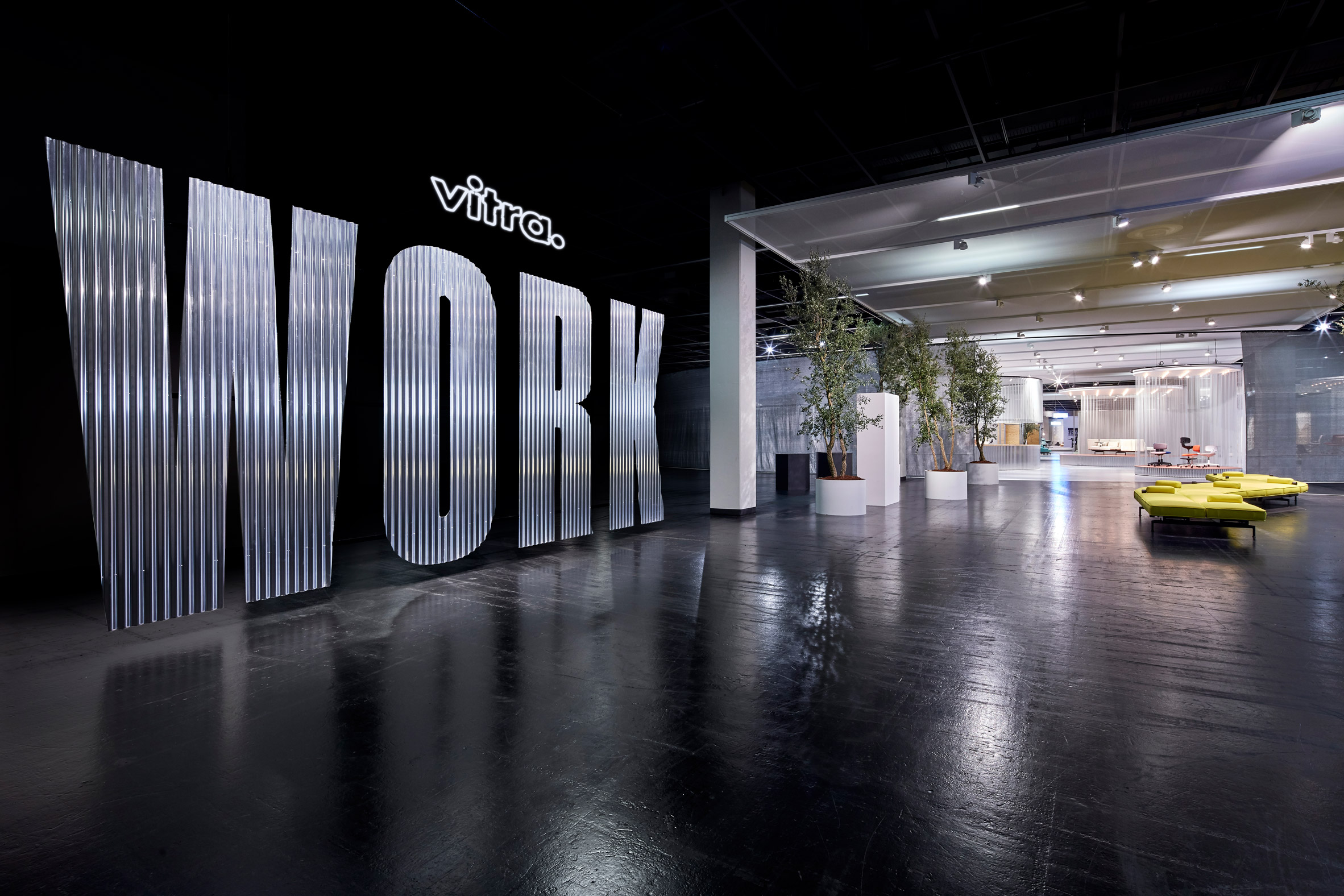 According to Vitra, the office of the 21st century is constantly changing, and increasingly merging with the public realm.

“We see people working wherever they happen to be – in hotels, airports, cafes, at the beach, on the train from A to B,” explained Nora Fehlbaum, CEO of Vitra. “These developments are increasingly turning public space into a productive workspace.” 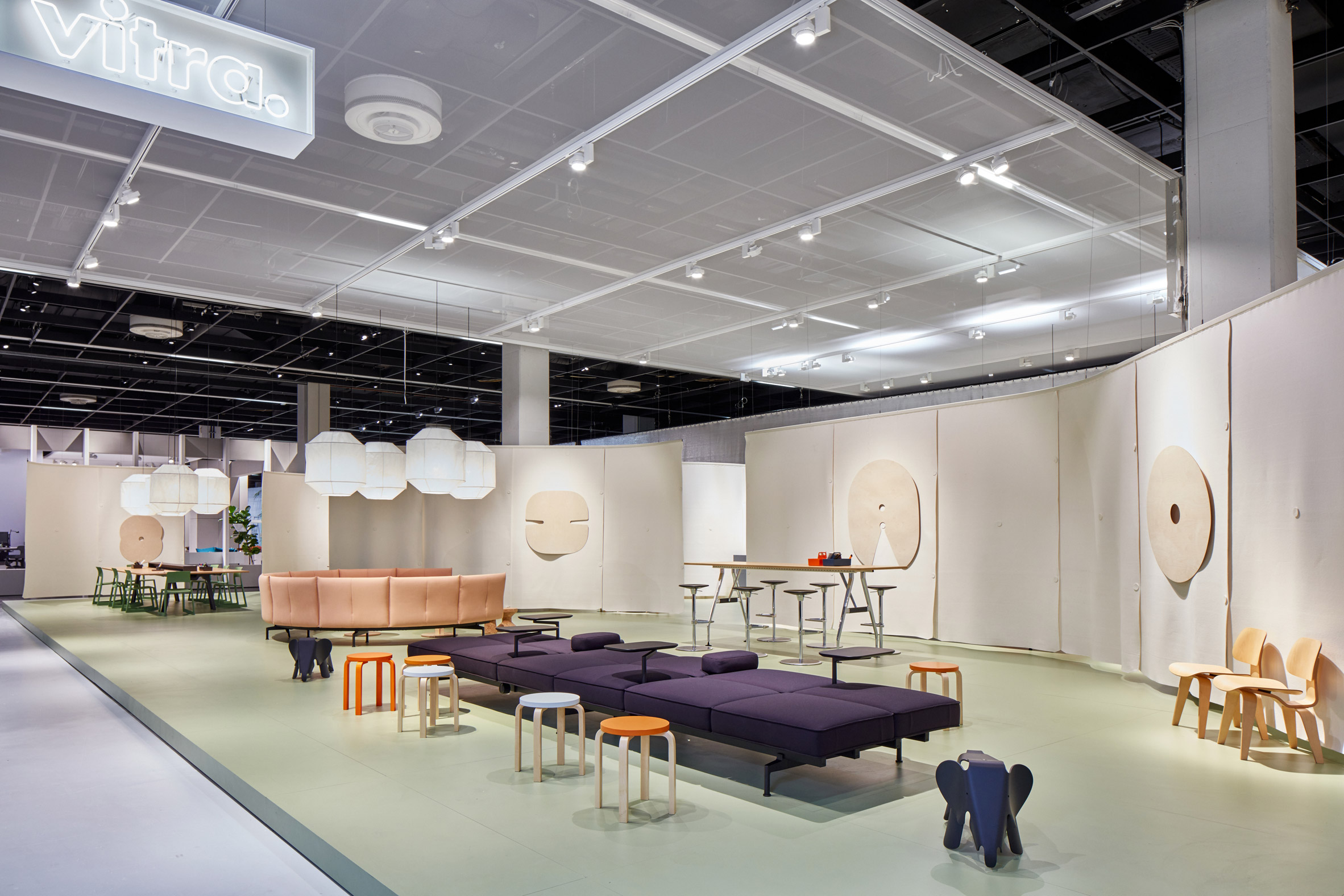 British studio Barber and Osgerby explores how spaces such as coffee shops and hotel lounges have become informal workspaces, in one of the three installations that feature in WORK.

Called Shared Office, the design highlights the way that people work in spaces they have no permanent attachment to. It shows how, in this setting, the traditional desk has become redundant – the nomadic worker can just as easily take a laptop to a sofa. 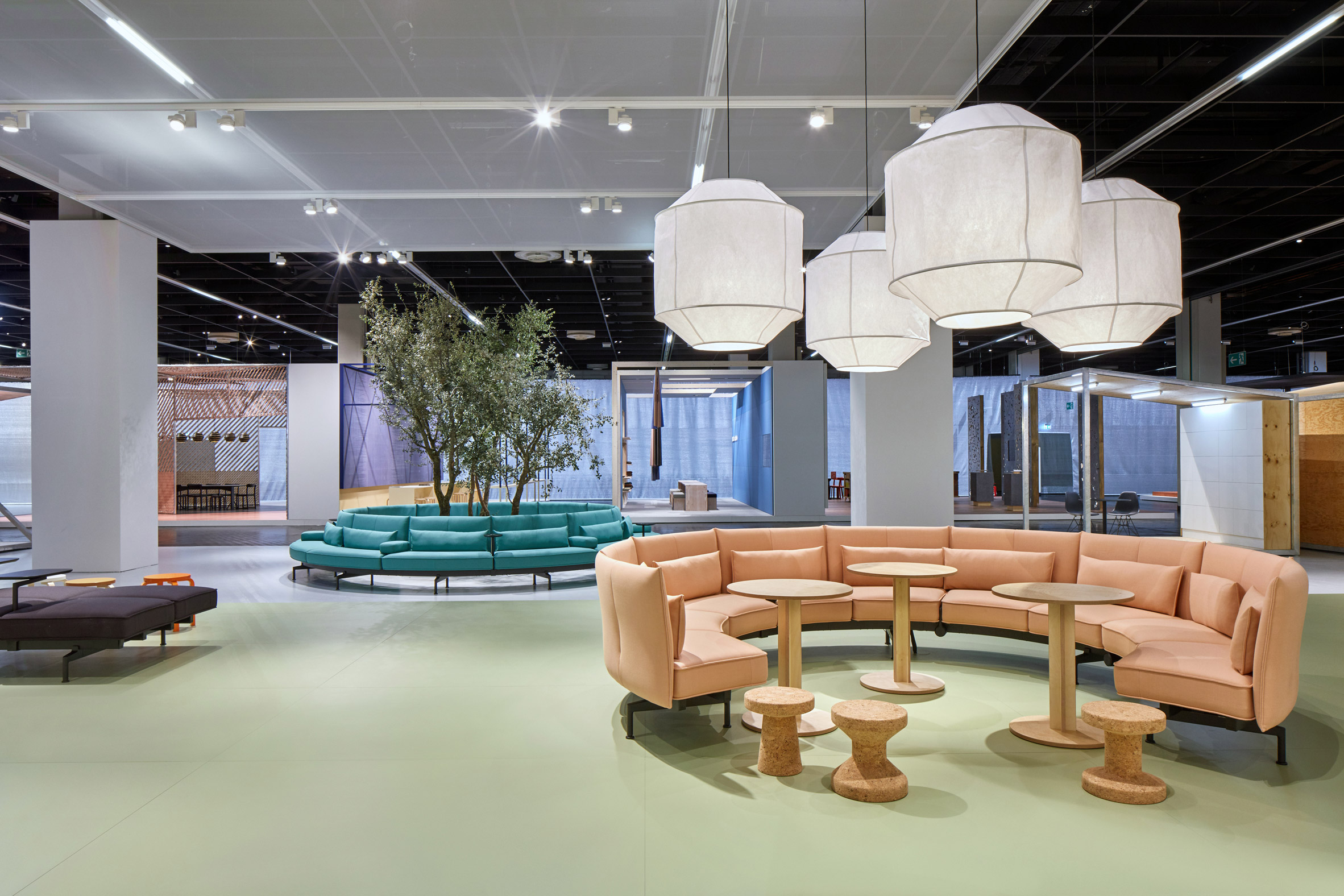 “Formal work rules are dissolving, regardless of where and how we work – now frequently in hotel lobbies or cafes,” explained studio founders Edward Barber and Jay Osgerby.

“As a result, the desk is no longer at the centre of our work life. It is disappearing as an archetype.”

The installation centres around Soft Work, a new modular sofa system that Barber and Osgerby has designed for Vitra. As well as seating, the design incorporates worktops, power outlets and acoustic privacy screens. 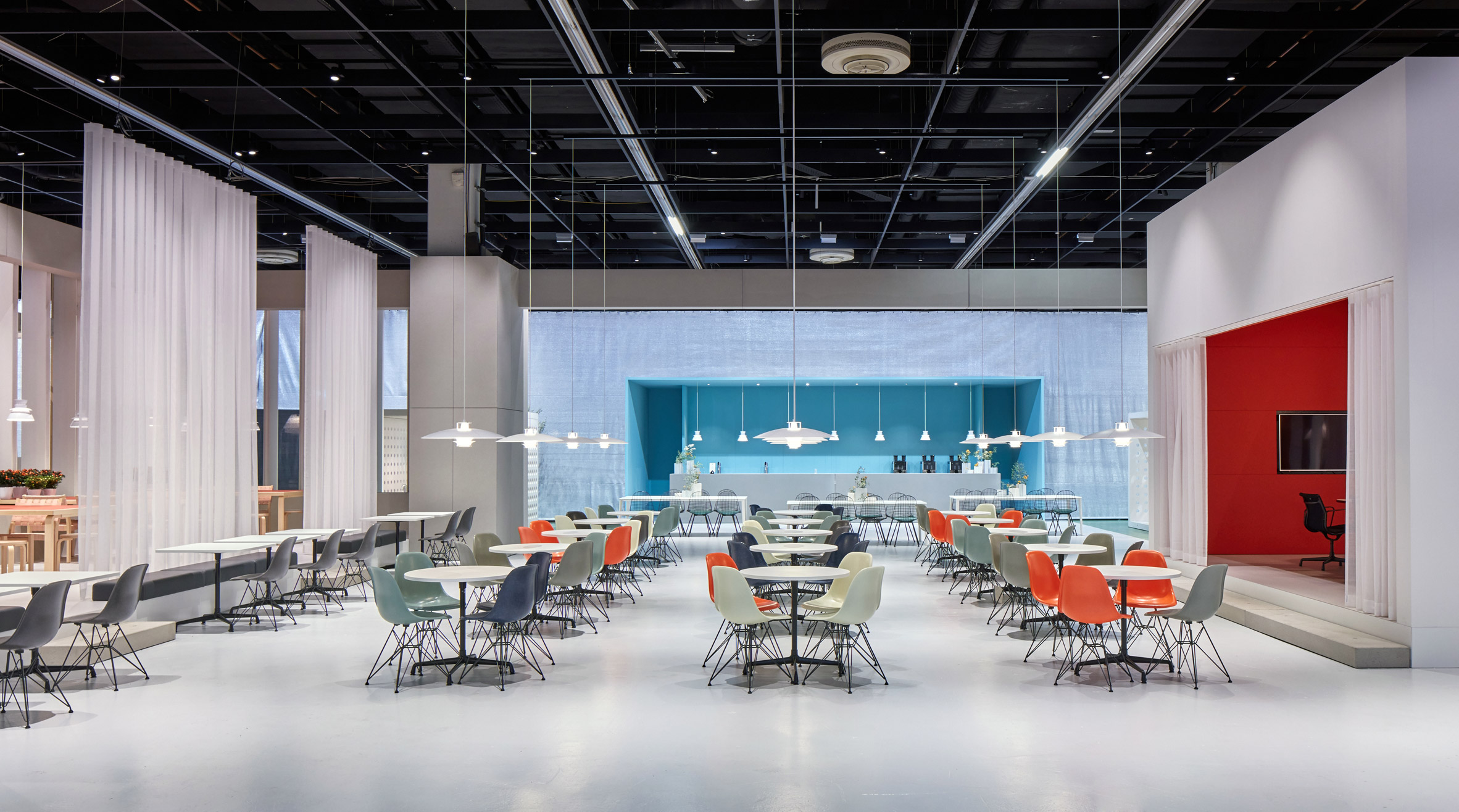 Next door, British designer Sevil Peach reveals her interpretation of the contemporary headquarters – typically a flagship for the style, attitude and values of the company it represents.

As well as workspaces and meeting areas, Company Home includes spaces dedicated to rest, where staff can recharge their batteries. There is also a park and a staff dining area – facilities that feature heavily in the tech campuses pioneered by Silicon Valley. 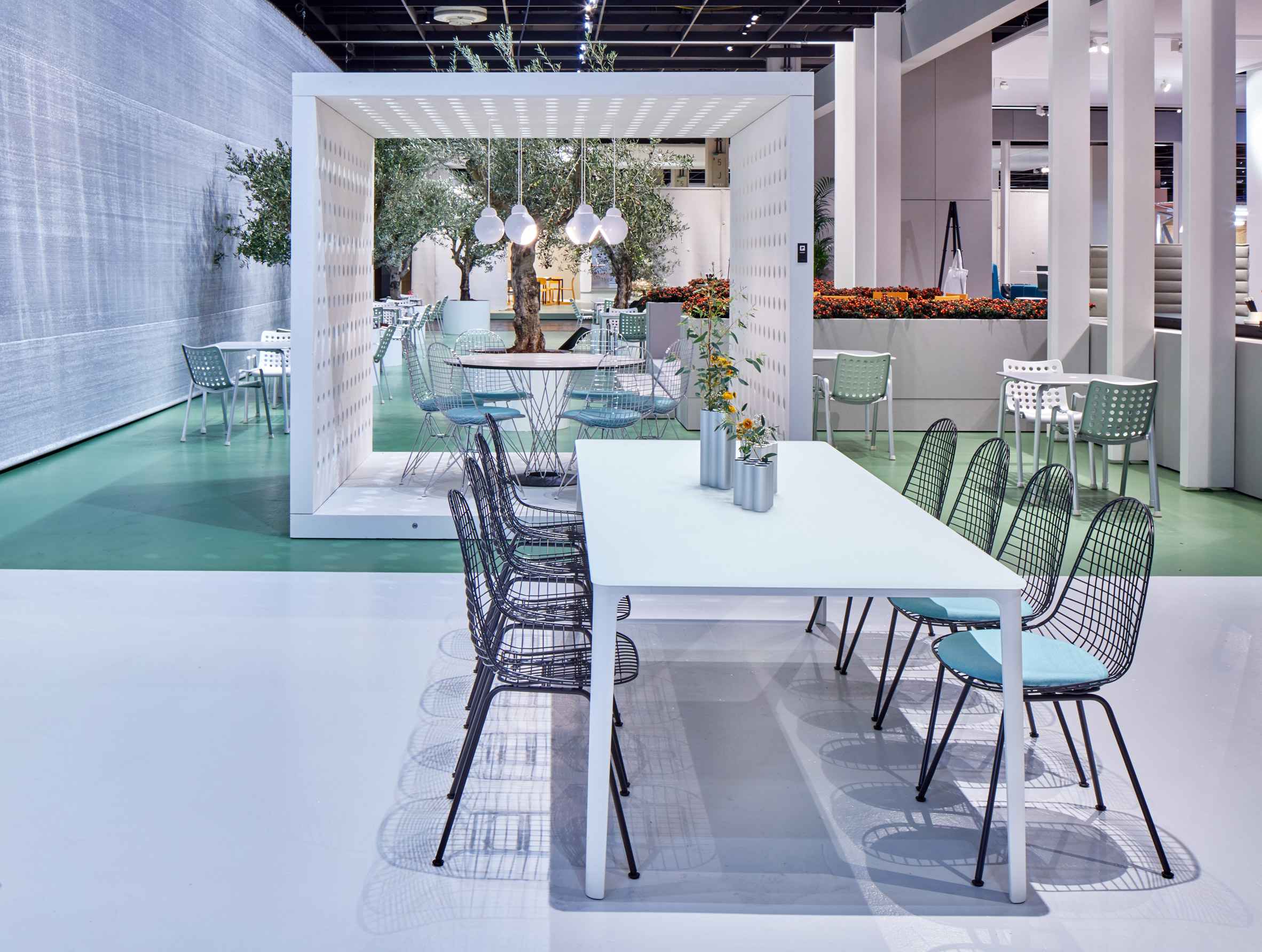 “When you are conceiving an office project, it’s important to capture the spirit of the company. If you manage to do that, good design happens almost by itself,” said Peach.

The office is furnished with AC5 – a versatile new range of office chairs designed by Antonio Citterio – along with classic designs by Charles and Ray Eames, and Artek, the furniture company co-founded by Alvar Aalto in 1935. 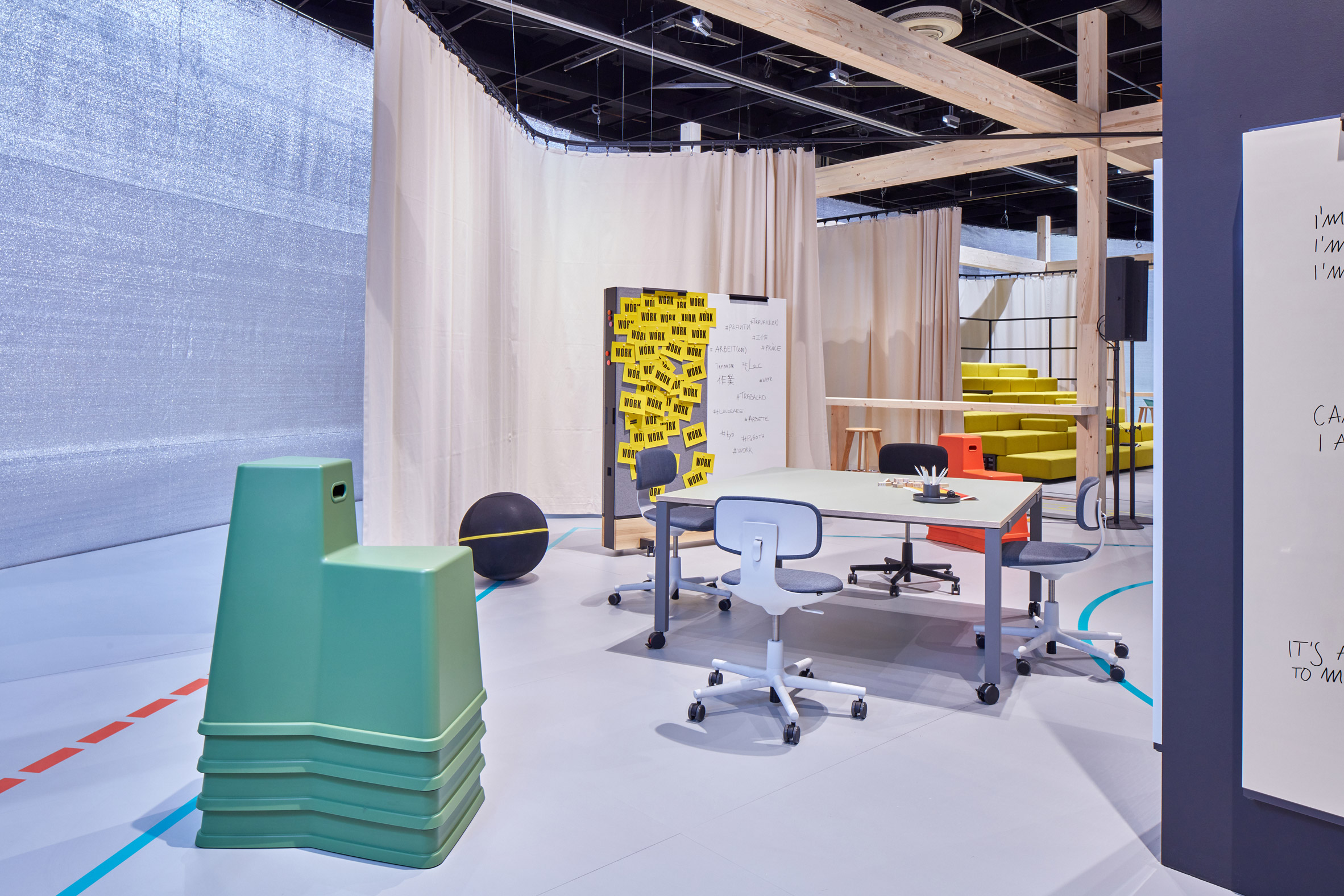 This shapeshifting space can be easily transformed from a typical office to an events space, and back again. It can also be returned to exactly as it was before the company moved in, with little cost or effort.

It is designed to suit agile young companies that are constantly evolving, and which don’t need to be tied to permanent structures. 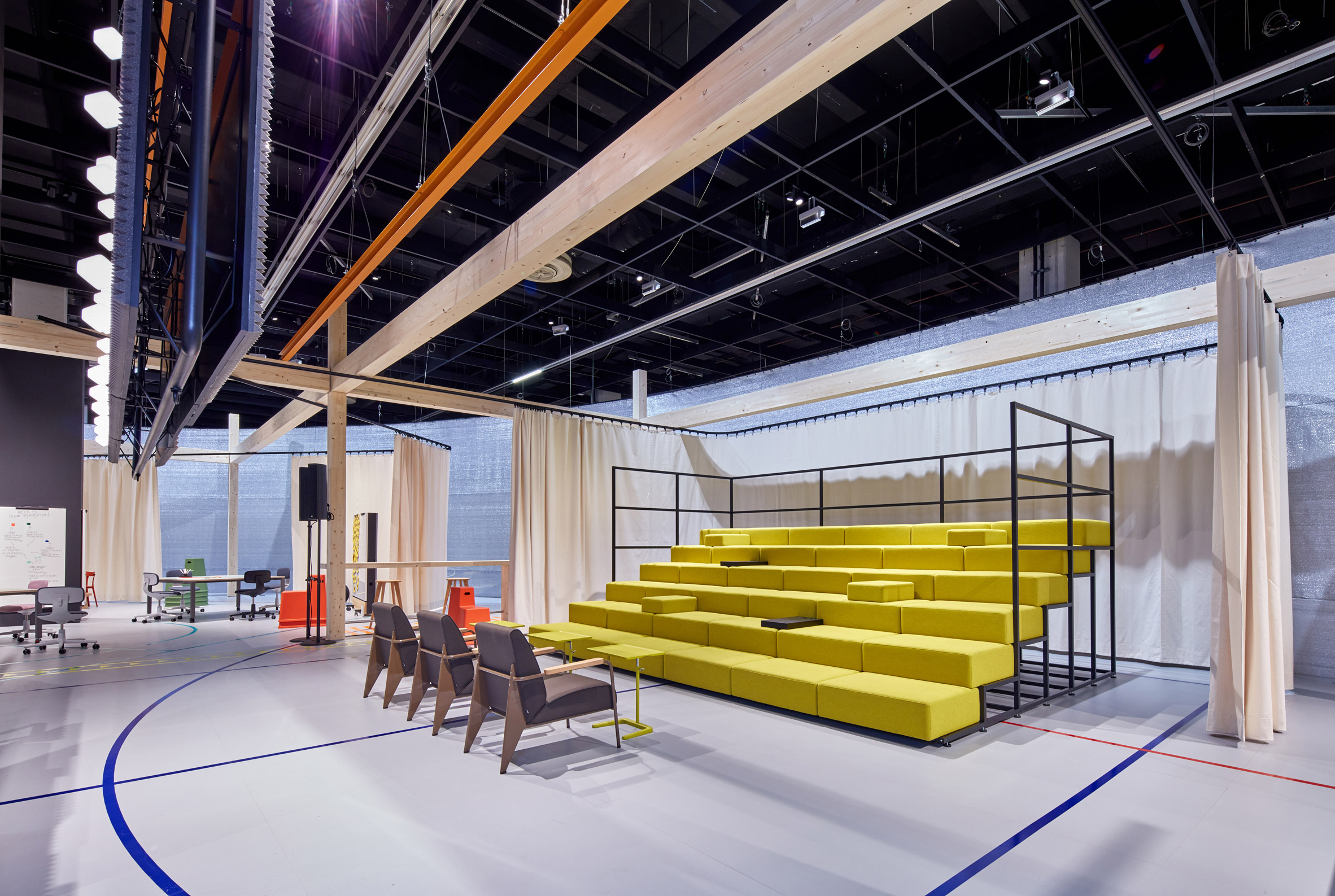 “The idea is that of an empty space that can be redesigned to suit new purposes at any time, or just as quickly be restored to its original setup,” said Grcic.

“I find it extremely interesting not to create a definite layout. A good analogy would be sports halls, which can be reconfigured to suit a wide variety of sports and activities.” 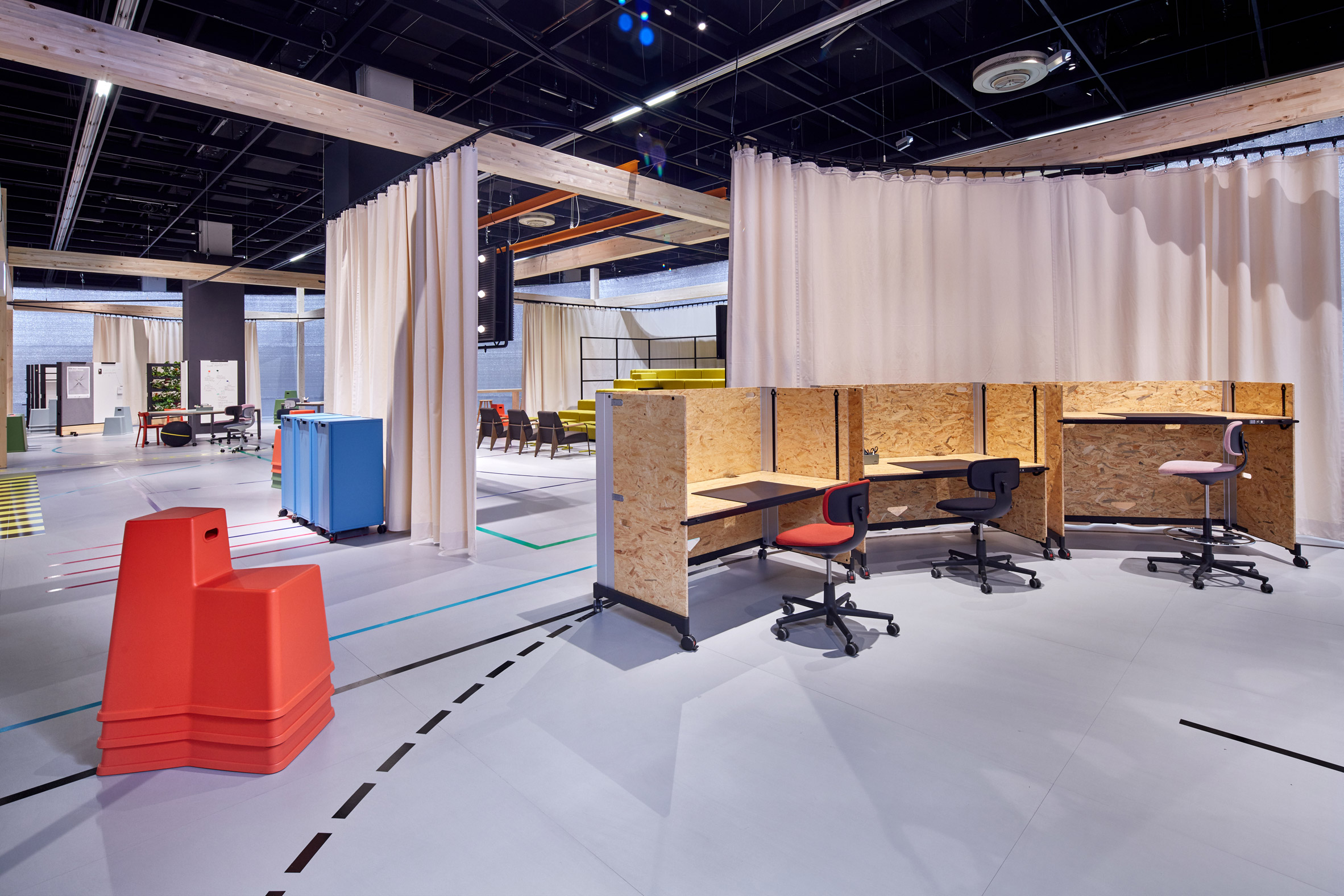 To make this possible, Grcic’s space is furnished with space-dividing curtains, mobile partitions, furniture on castors and chairs that can be stacked up out of the way when not needed.

These include the celebrated Tip Ton chair by Barber and Osgerby, along with new products likes the Stephan Hürlemann-designed Dancing Wall and the Rookie task chair designed by Grcic. 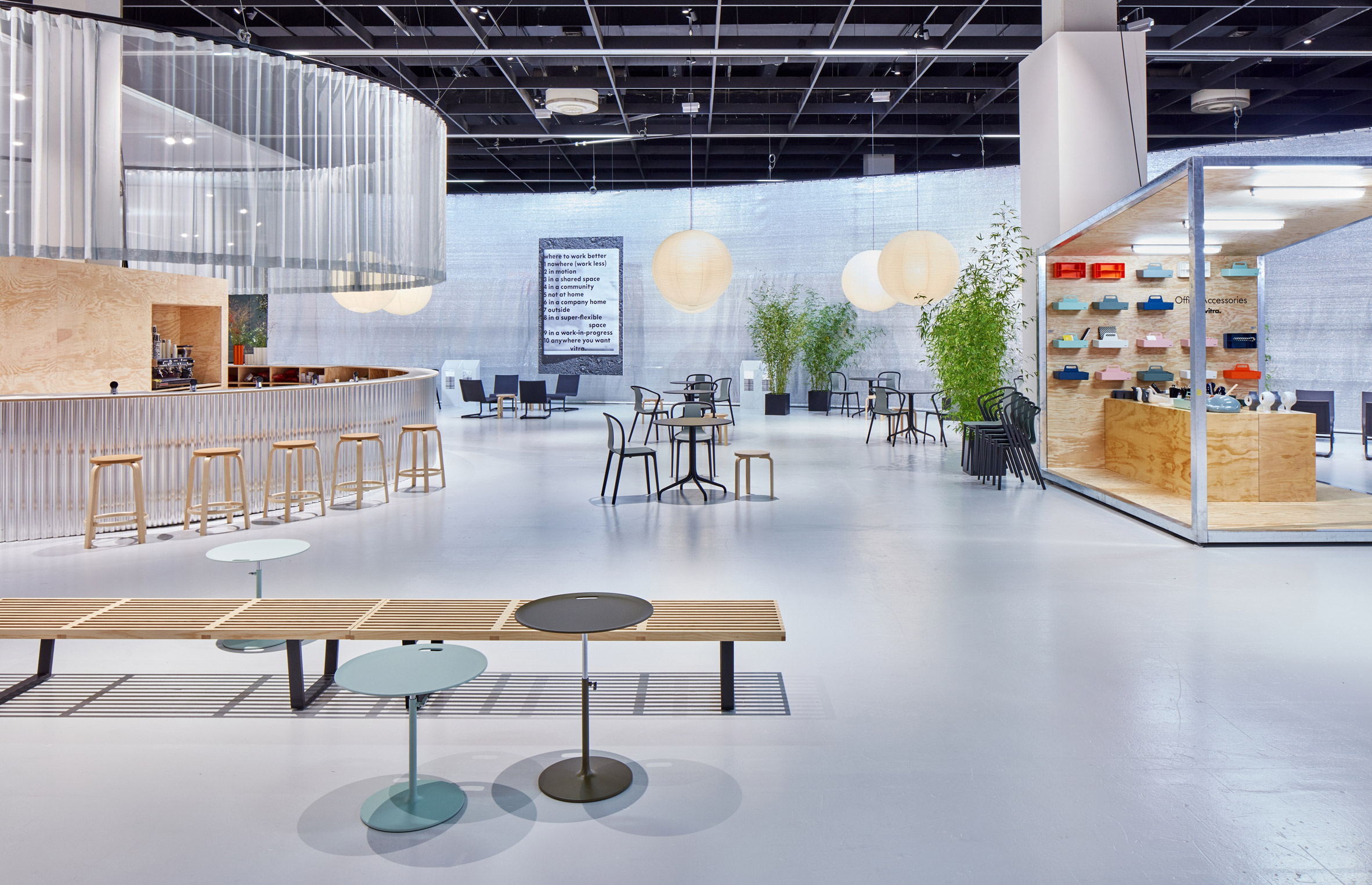 London-based architect Pernilla Ohrstedt and Los Angeles-based Jonathan Olivares teamed up with Vitra to design the exhibition. As well as the three offices, the space includes a marketplace showcasing innovative brands such as Aircharge, Kvadrat Soft Cells, Laufen and Wästberg.

“At work in the 21st century, we find ourselves with the privilege of following and developing our passions,” said Jonathan Olivares.

“Automation and countless new technologies have liberated us from many of the mundane tasks that defined the workplace of the 20th century, and as a result the workplace of today is a space of discovery and excitement.” 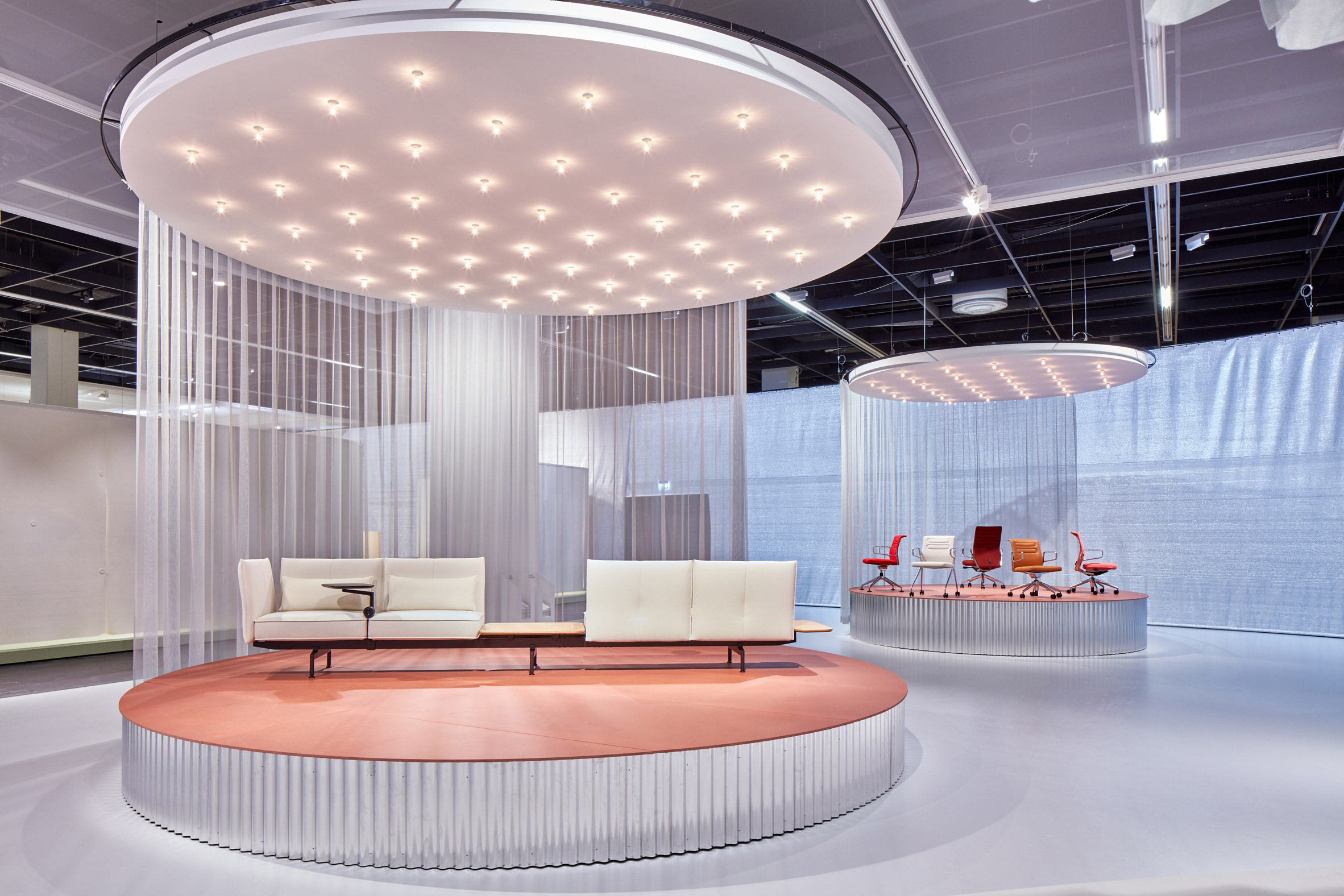 A special Vitra publication titled where to work better – edited by Ohrstedt and Olivares, and designed by Åbäke – has been released to accompany the exhibition.

Photography is by Eduardo Perez, courtesy of Vitra.

The post Office of 21st century is “wherever people happen to be” says Vitra appeared first on Dezeen.