A concrete structure that was built as a bomb-proof fuel pumping station during world war two in Dungeness, England, has been transformed into a holiday home by UK-based architecture studio Johnson Naylor.

Located on the headland of Dungeness in Kent, which is Britain’s only desert, the building was built during world war two as a pumping station to send fuel though undersea pipes to France and support the D-Day landings.

The low-lying oblong building has been transformed into a holiday home by Johnson Naylor, which is one of the five projects to be shortlisted in the Dezeen Awards’ Best Small Interior category. 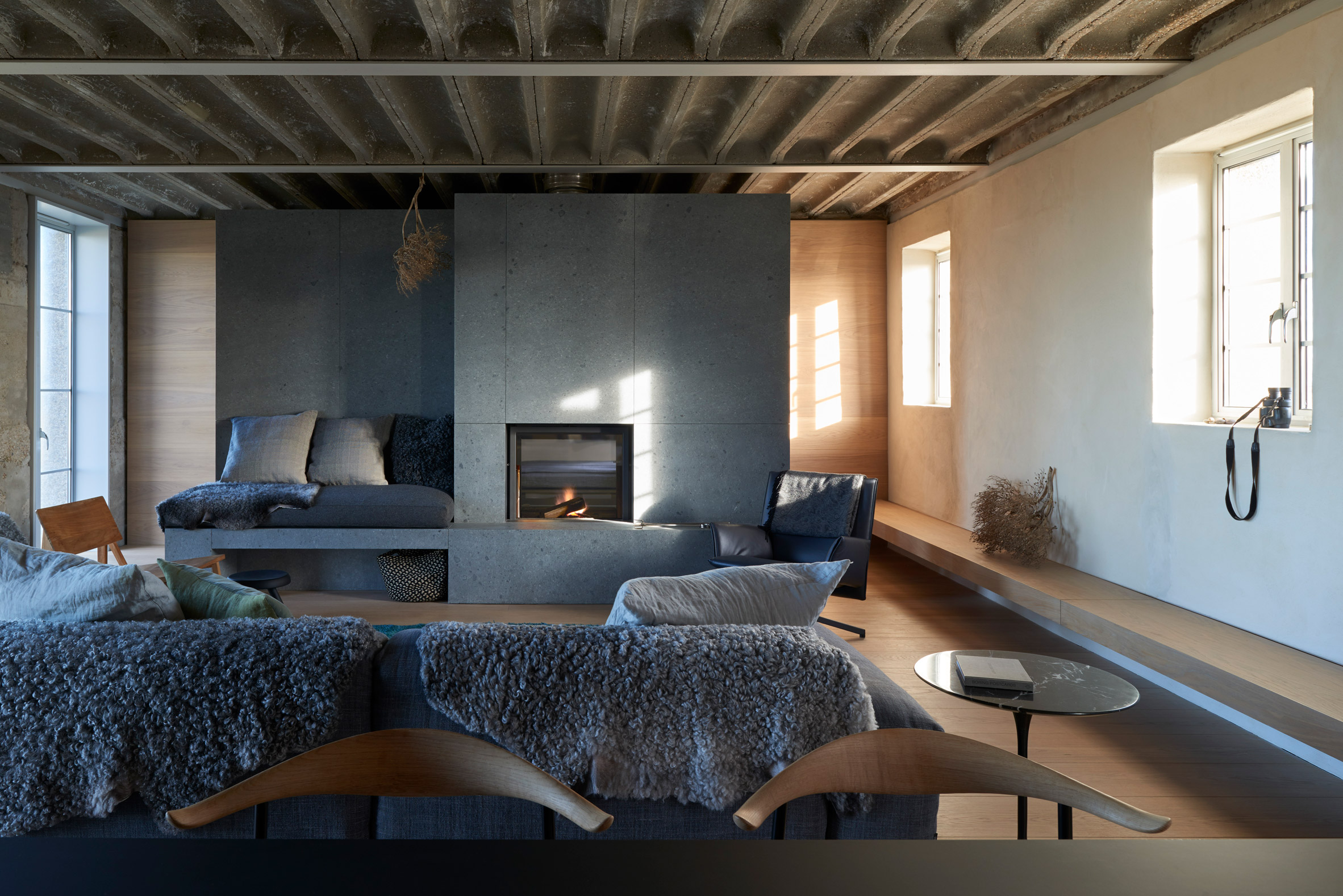 Following the war the bomb-proof structure was converted into a small school with the addition of a chapel in the 1950s. It was subsequently used as a community hall and functioned for twenty years as a meeting lodge for the Royal Antediluvian Order of Buffaloes who moved to other premises in 2009.

Arranged across one floor, the Dungeness holiday home retains much of the original construction such as the a concrete plank ceiling supported with steel beams.

These original features contrast with Johnson Naylor‘s sleeker new interventions, such as the weathered steel entrance hallway, which is detached from the main building by glass. 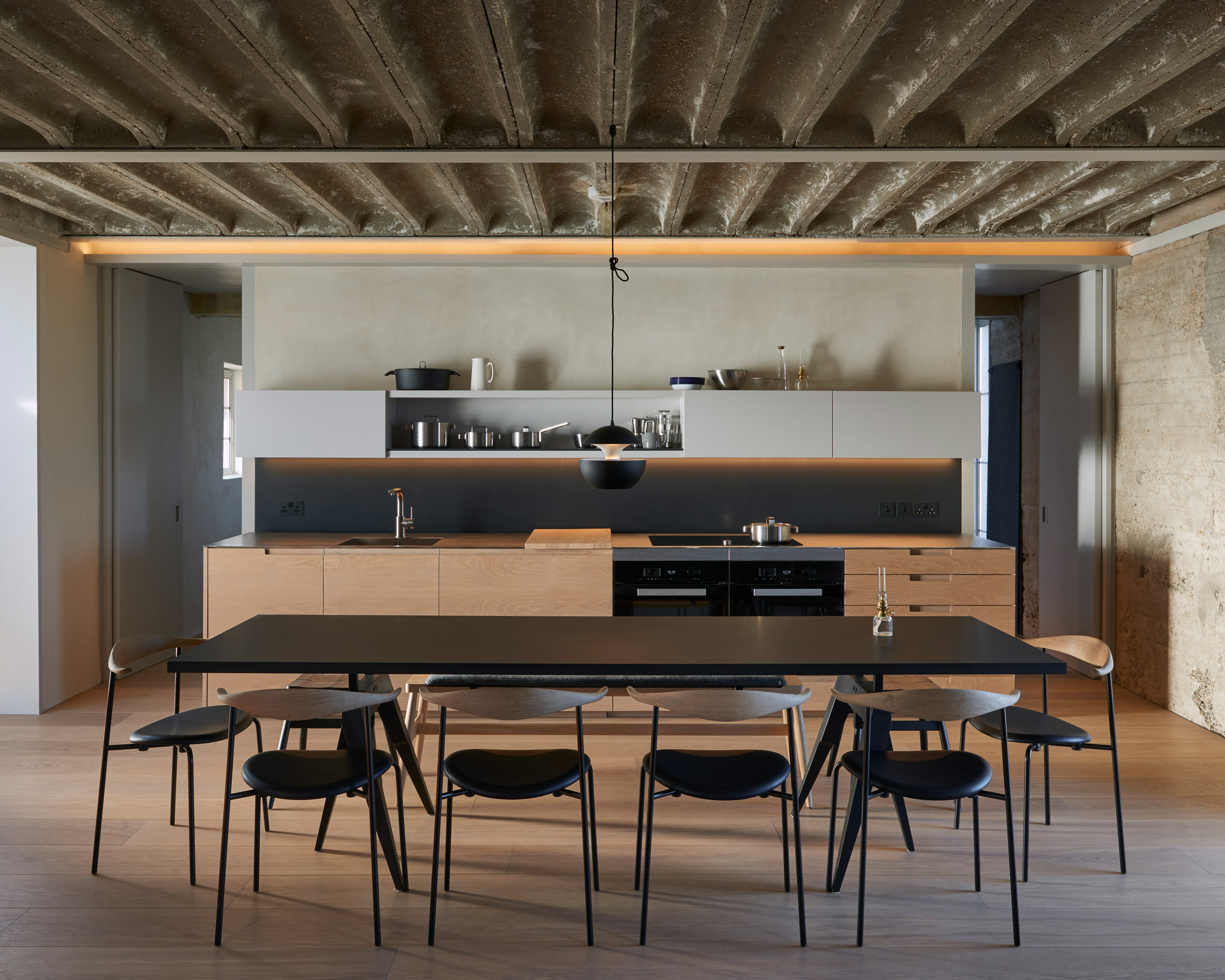 The architects regarded the building’s original material structure as both an opportunity and a challenge. The 30-centimetre-thick walls are constructed from a poorly poured shuttered concrete while the roof is made from concrete supported with steel beams.

In addition, there is a perimeter steel ring made up of old railway track as metal was in short supply at the time that the pump station was built.

“Dungeness is architecturally rich with a diverse collection of architectural styles so retaining the exterior treatment and pragmatic quality of the building was important,” stated the architects. “Working with, rather than against, a building is the secret to a successful project.” 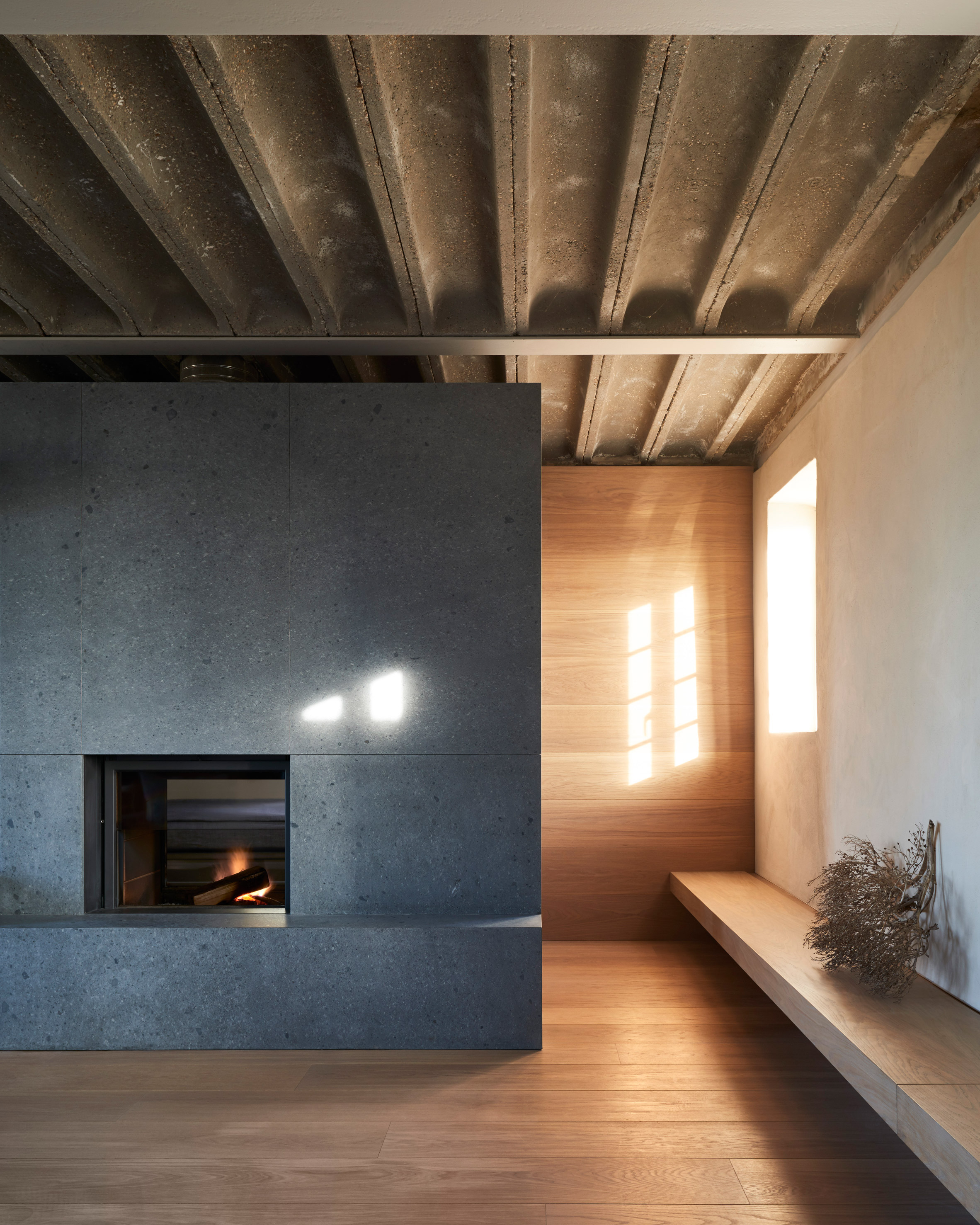 The architects found that the walls could also act as a heat store.

“The building has been insulated from the outside leaving the walls free to absorb and retain heat – they act like a huge storage radiator,” they explained.

“The under floor heating and hot water is powered by an air source heat pump which combined with the level of insulation, photovoltaics on the roof and LED lighting, make the building very energy efficient.” 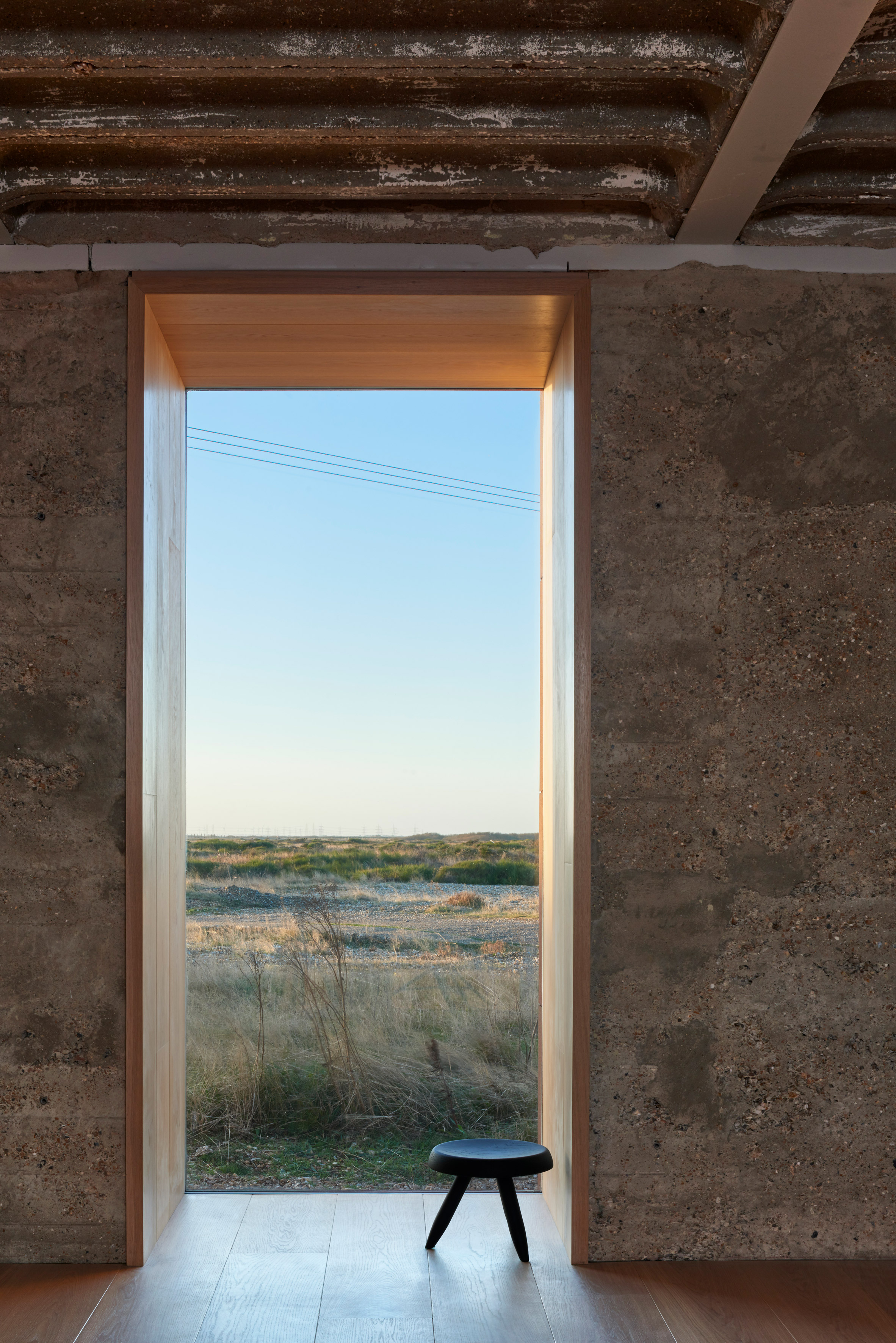 The vertical concrete on the west wall, and the exposed ceiling, became what the architects refer to as the project’s anchor materials, which everything was built off.

These features served as a starting point for a calm and restrained palette softened by materials such as natural finished oak and Cumbrian slate cladding with a honed finish.

“A simple palette runs throughout the building and like the language of buildings on Dungeness it is workmanlike in attitude,” said the architect. 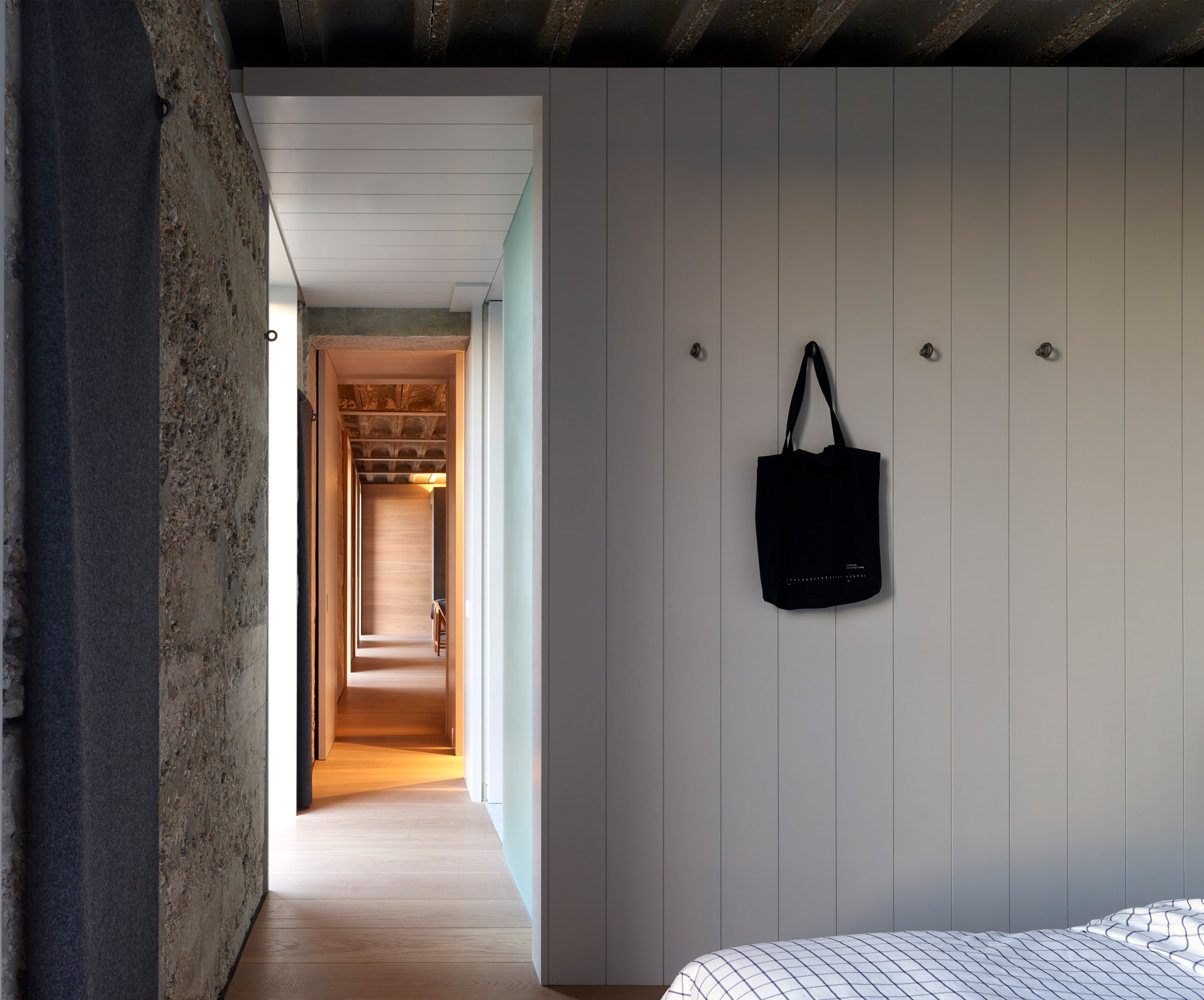 The house’s main space – which houses the kitchen, dining room and living room – is divided from the adjoining snug by a stone clad fireplace that acts as a wall but sits below the concrete and steel ceiling.

Wide board oak doors serve as a warm counterpoint to the austere concrete, while oak is also used to line the east wall, and was also used to make the low level kitchen drawers and a bench that spans the wall between the main space and snug. 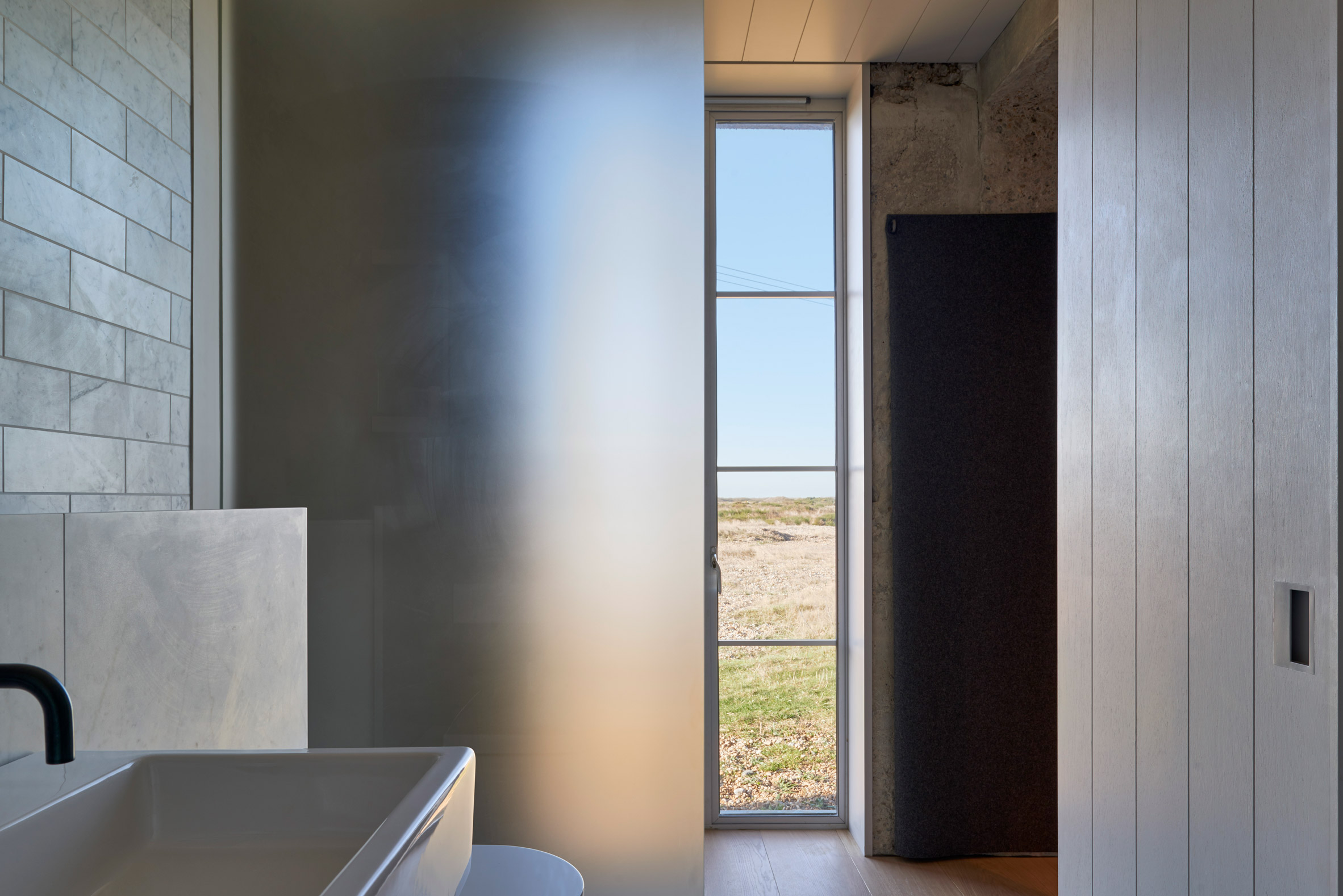 A central element houses the bathrooms and is lined in a vertically routed board decorated in soft grey to match the colour of the metal beams on the ceiling and the purpose-designed beds in Bedroom two. 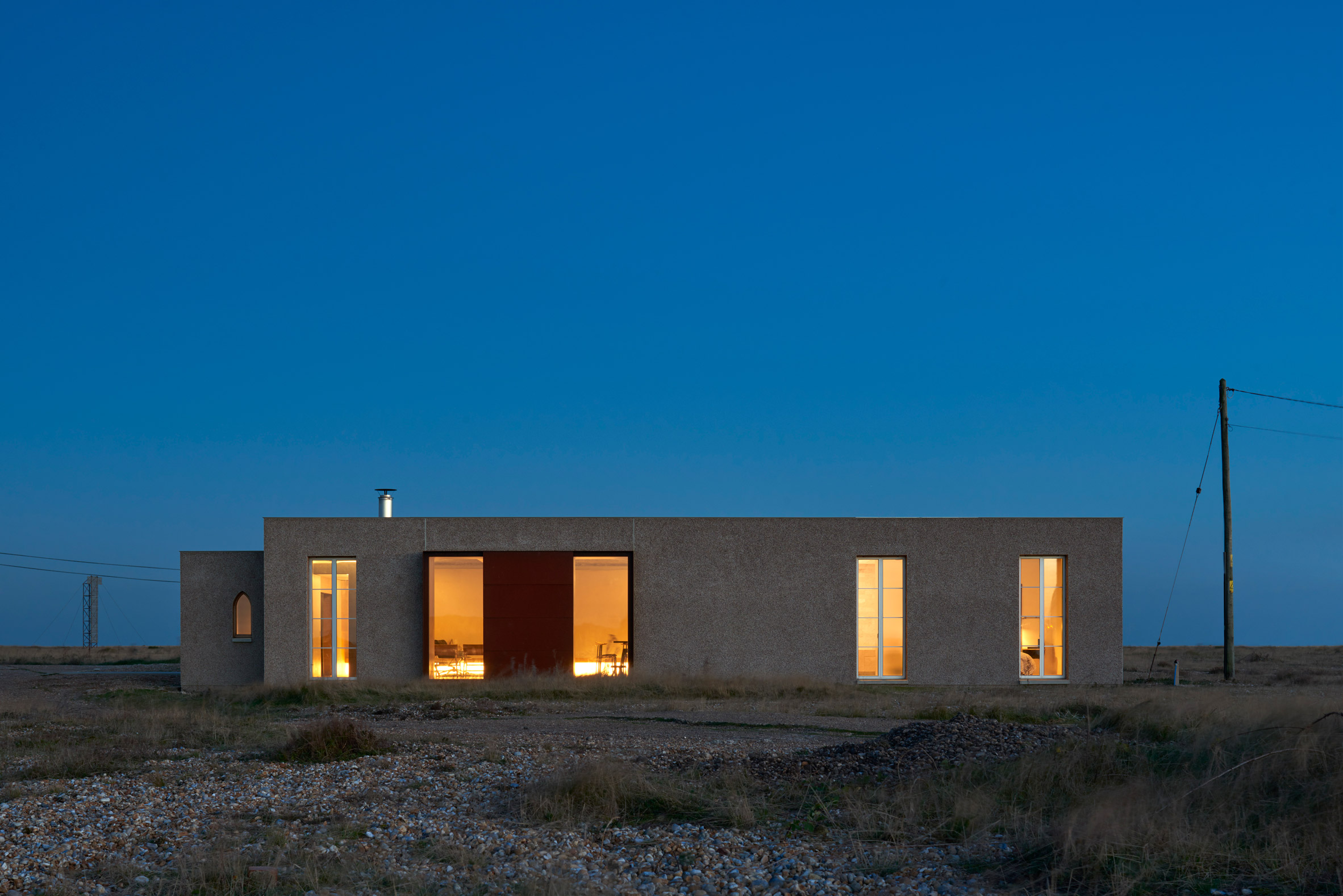 The interiors are lit by LEDs positioned in concealed sources and controlled by a lighting control system that allows for various mood settings.

One concealed light in the glass entrance activates automatically at night to give a soft glow – a feature that the architects said was inspired by the tradition of lamps in coastal houses that were lit to guide the boats home. 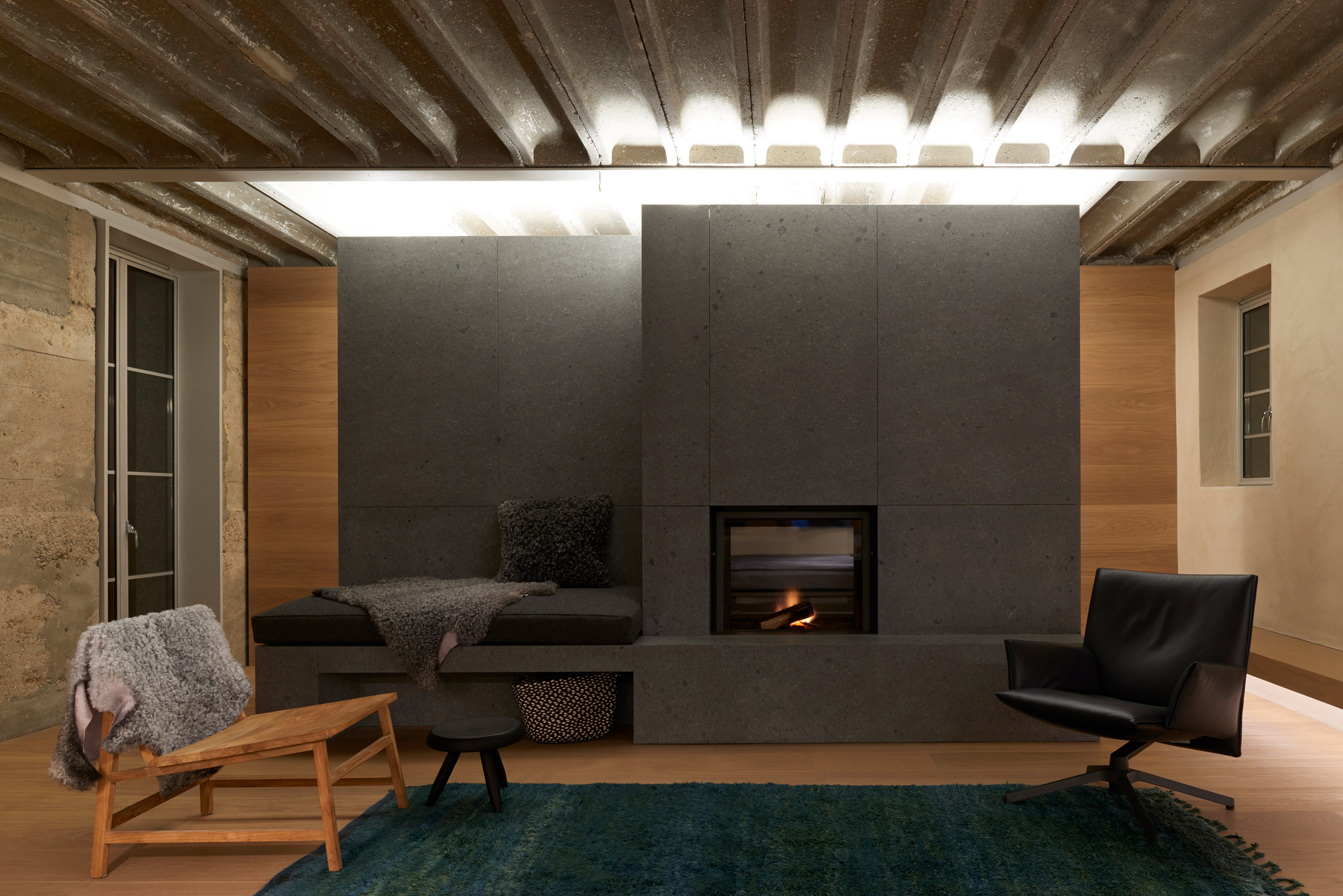 The Corten entrance hallway that is detached from the main building by glass is designed to maximise the amount of daylight that enters the building as well as emphasise the oblong shape of the original structure.

“The light at Dungeness is wonderful and though the building is heavy in appearance,” it has a lightness internally, commented the architect.

Home to weather-beaten fisherman’s cottages and a nuclear power station, Dungeness’s unusual shingle beach landscape has attracted many award-winning architects in recent years. Due to the estate being a national nature reserve and conservation area, the most recent additions are contemporary conversions of fisherman’s shacks.

Photography is by Guy Montagu-Pollock