The Oak Park Housing complex was built on a long-vacant property in Oak Park, a diverse neighbourhood that struggled for decades with economic stagnation and disinvestment. 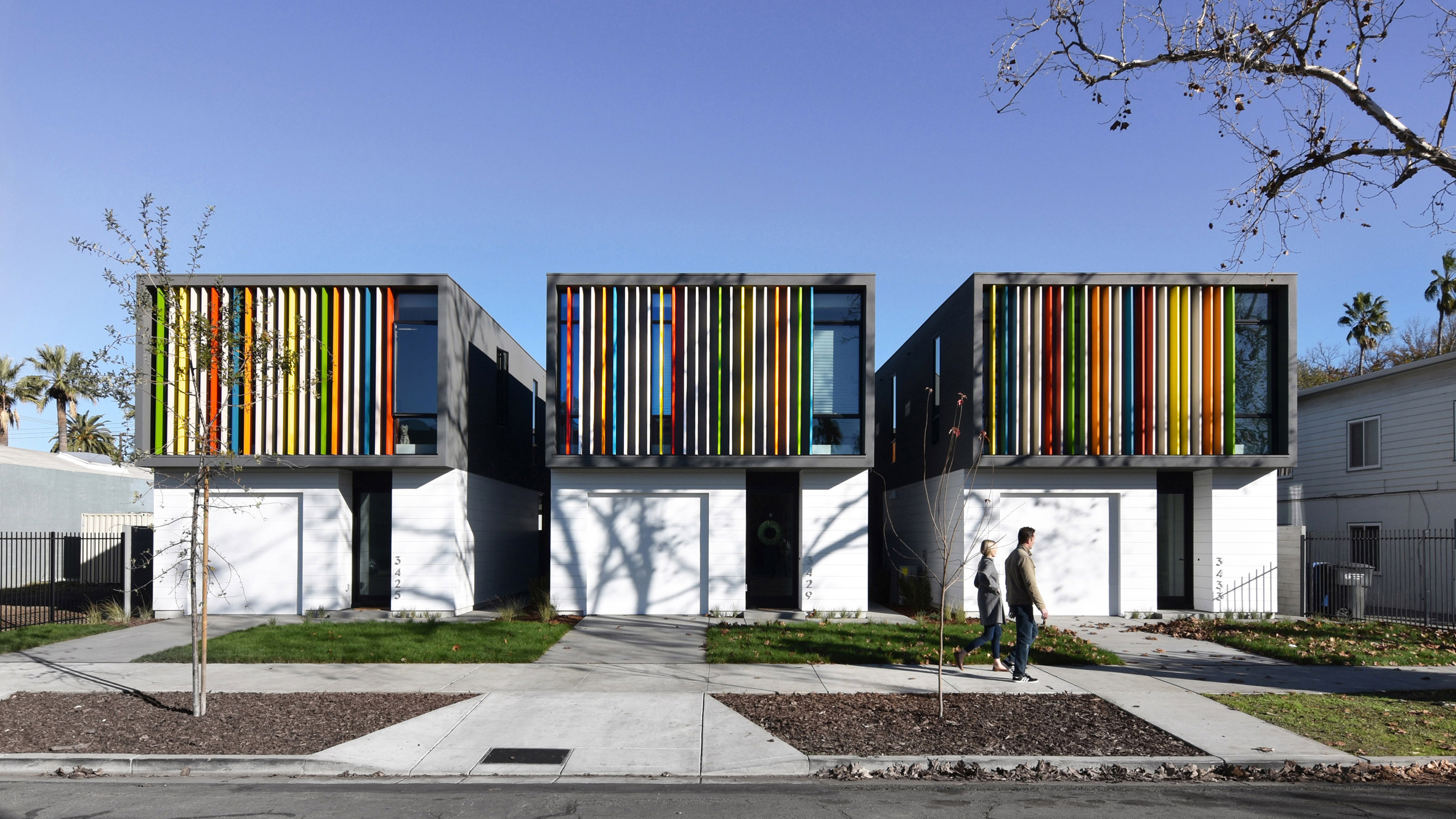 The area also experienced social unrest. In 1969, riots broke out in Oak Park following a police raid of an office for the Black Panther Party. The event left “lasting scars on the city’s social and physical landscape”, according to Johnsen Schmaling Architects – a studio based in Milwaukee, Wisconsin. 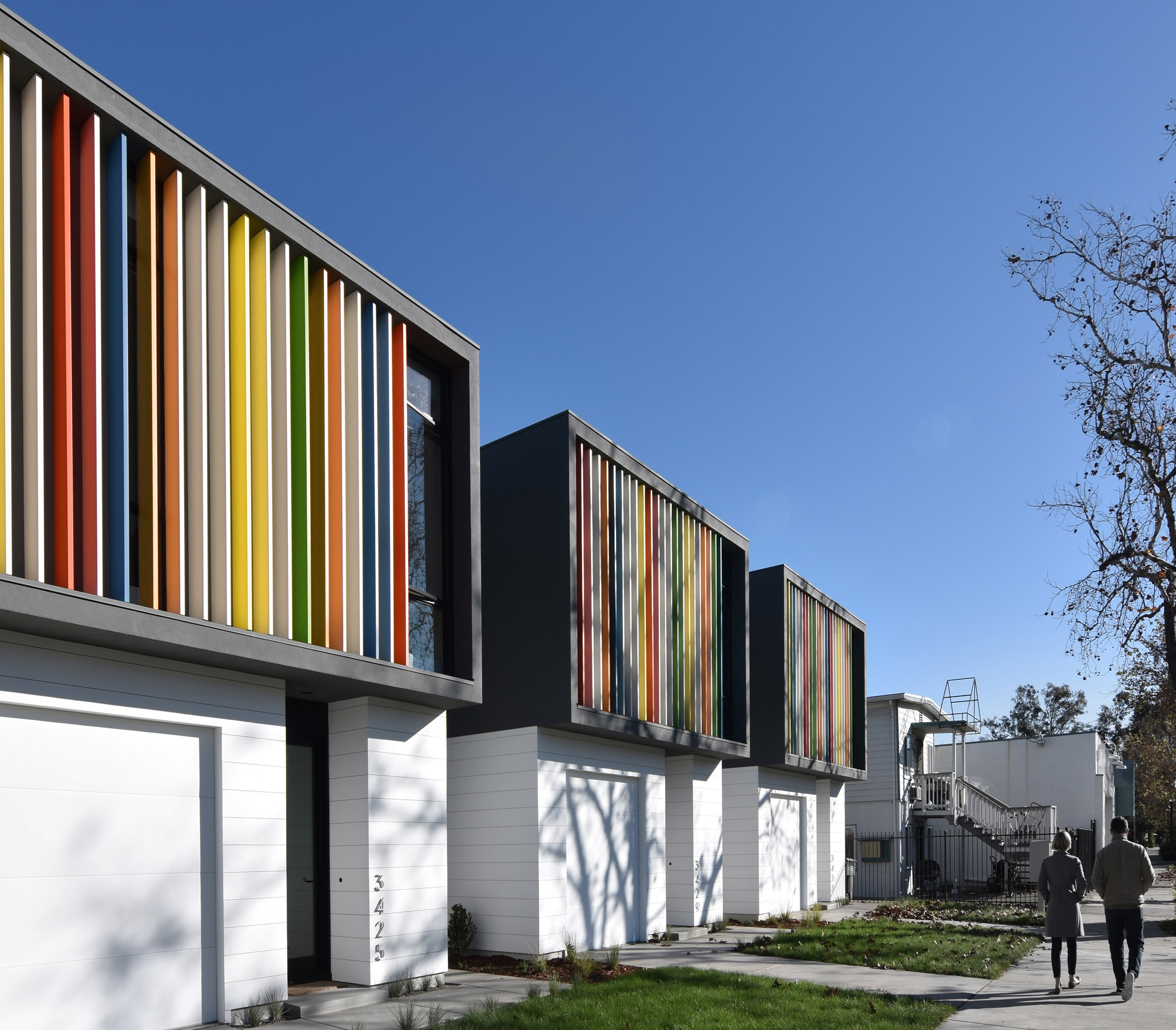 Like many urban districts in America, Oak Park has been undergoing transformation in recent years. Young professionals, artists and students have migrated to the neighbourhood – and art galleries, coffee shops and small businesses have been taking over abandoned storefronts. The Oak Park Housing complex is one of the area’s first residential developments in nearly 50 years, according to the architects. 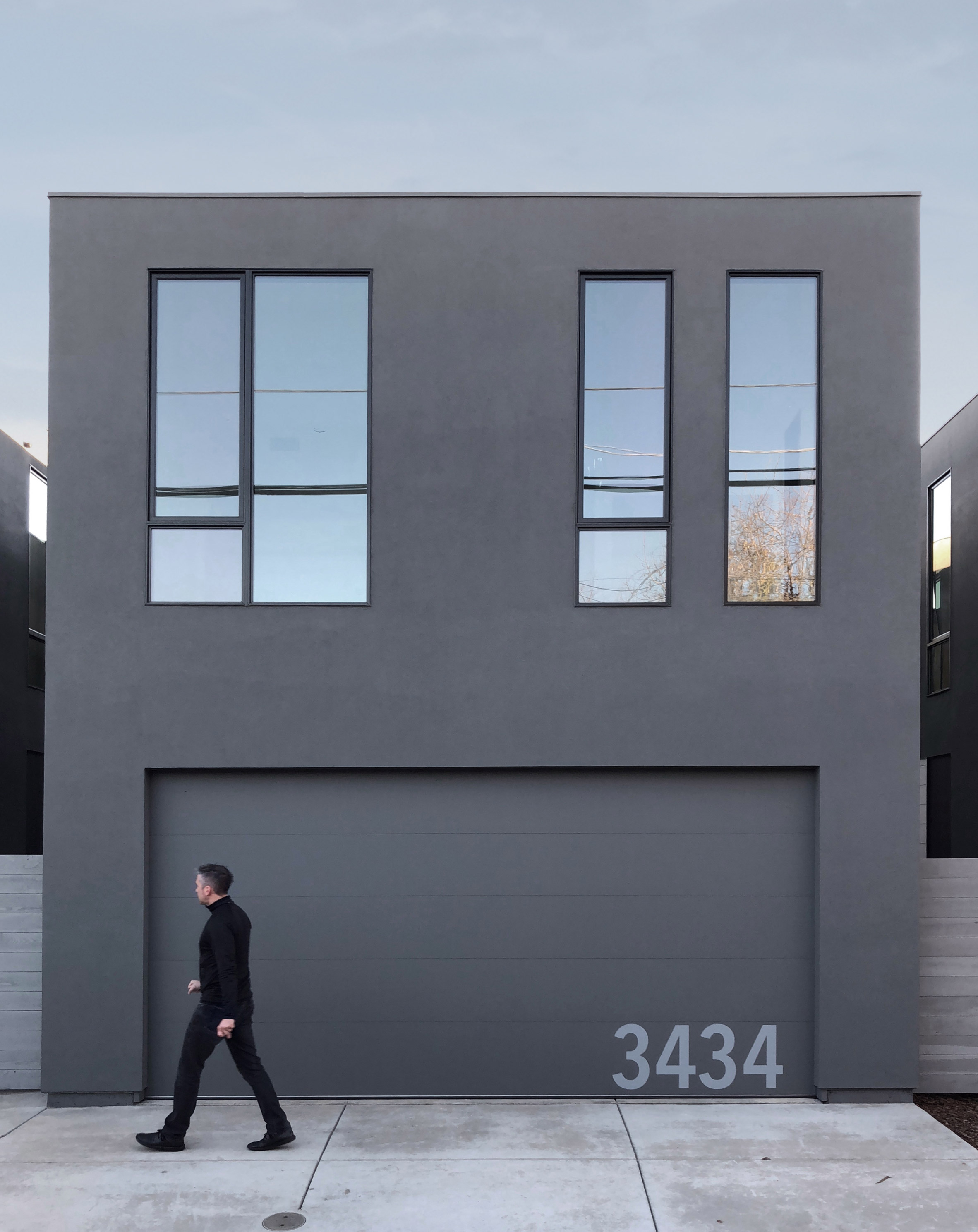 “Accordingly, the project is more than just a contemporary addition to the existing housing stock,” the firm said in a project description. “It is a harbinger of urban revitalisation, its architecture cheerfully embracing the creative and buoyant energy that has propelled the ongoing renaissance of this vibrant and culturally diverse community.” 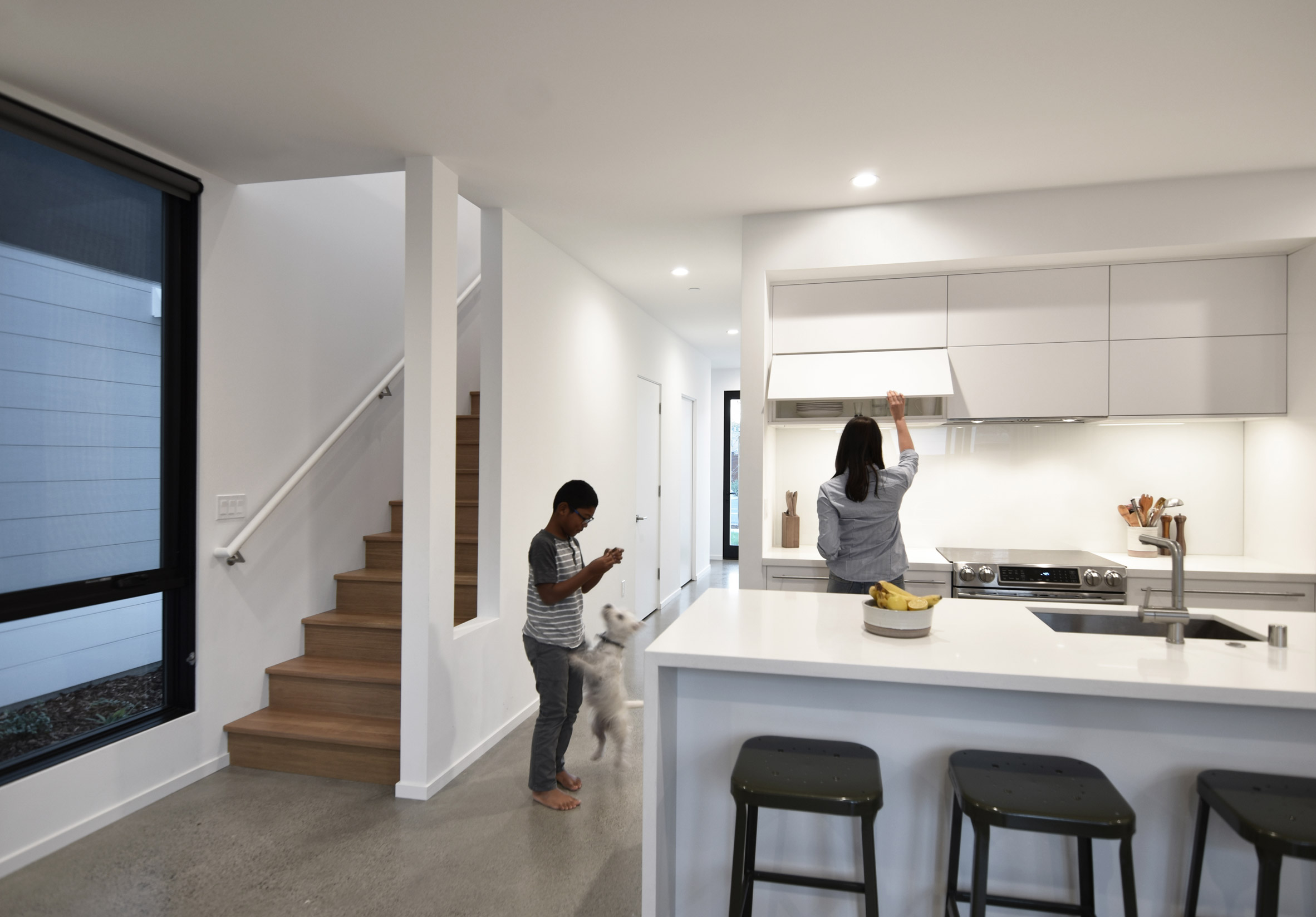 Built on a rectangular lot, the development consists of six market-rate homes – three facing a street, and three facing a public alley. A fence runs between the two parallel rows of single-family dwellings.

While appearing nearly identical, the homes have slight variations in their plans. Each wood-framed building rises two storeys and totals about 1,500 square feet (140 square metres).

“Carefully proportioned to echo the massing and scale of the area’s existing building stock, the houses are simple volumes – their appearance crisp but deliberately playful in a nod to the progressive and creative spirit permeating Oak Park,” the team said.

Exterior walls are clad in cementitious stucco and poly-ash siding. On the upper portion of the facades, the team added colourful, aluminium louvres that shade windows and add visual interest. 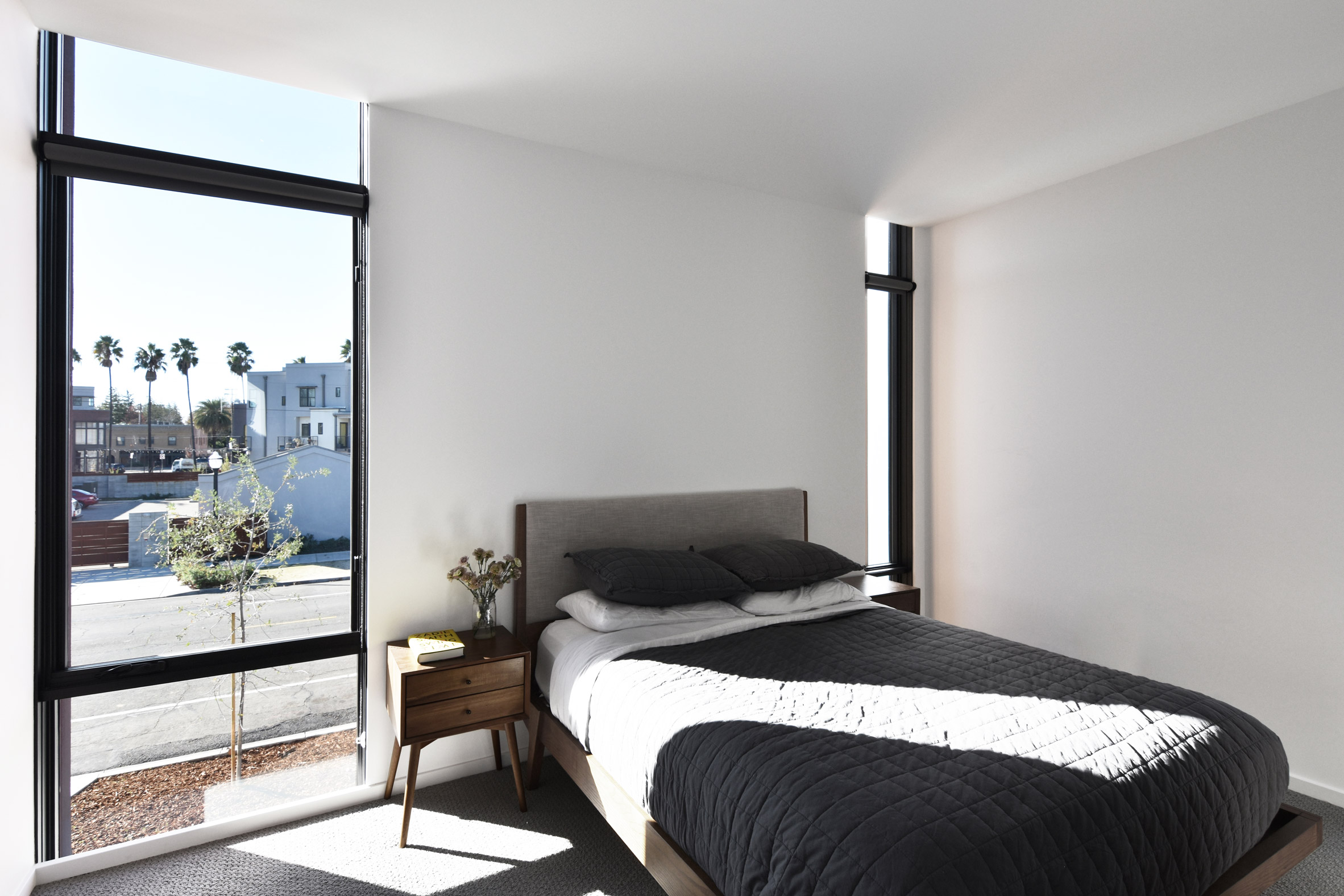 “The metered spacing of the louvres sets up a deeply textured, dynamic cadence – their prismatic colours complementing the homes’ otherwise neutral, muted tones and cheerfully reverberating the vivid, kaleidoscopic hues of the buildings and murals nearby,” the team said. 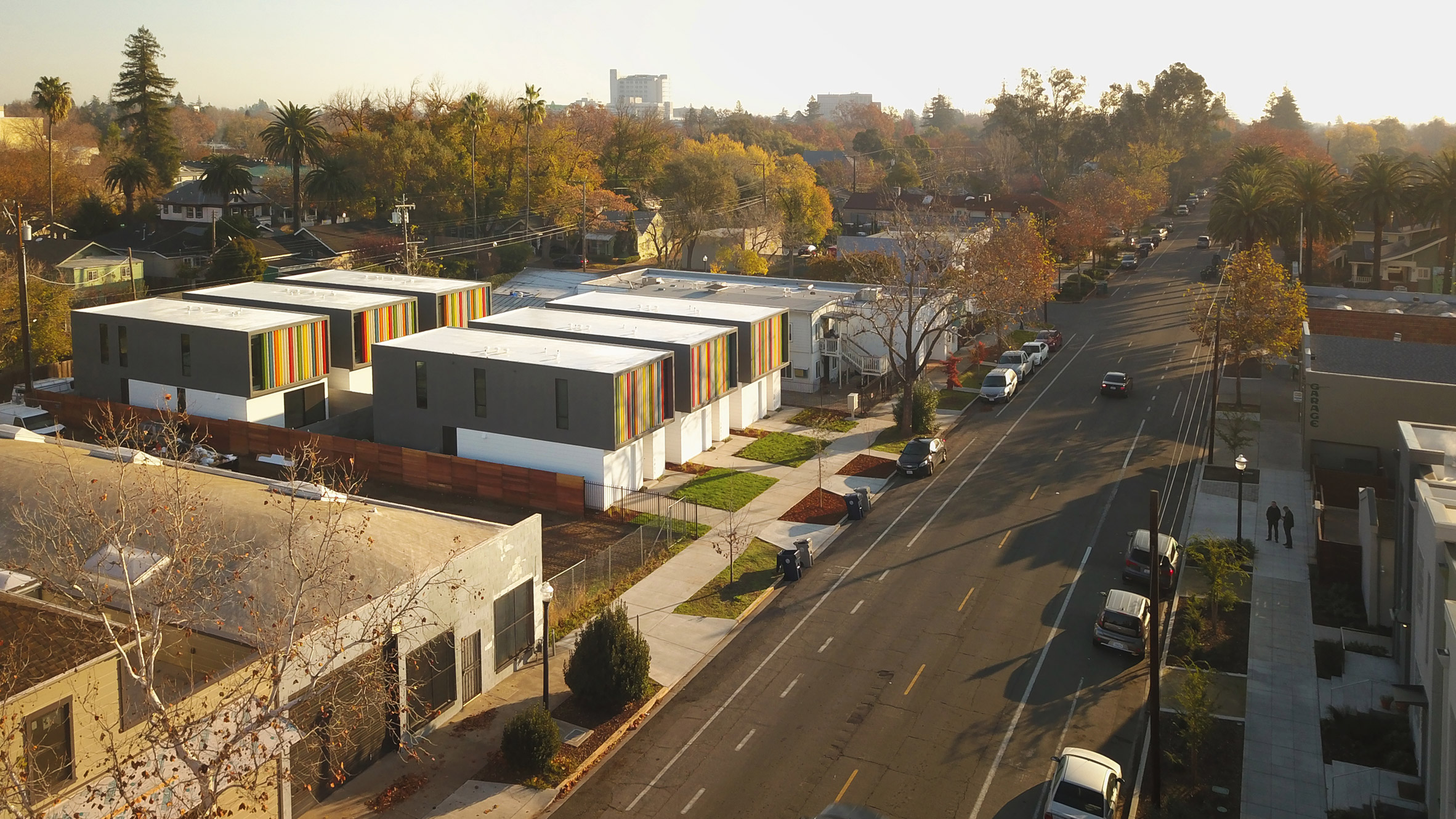 Inside, the dwellings features basic finishes such as white drywall and concrete flooring. In each home, the ground floor contains a kitchen, dining area and living room, while the second floor encompasses three bedrooms. 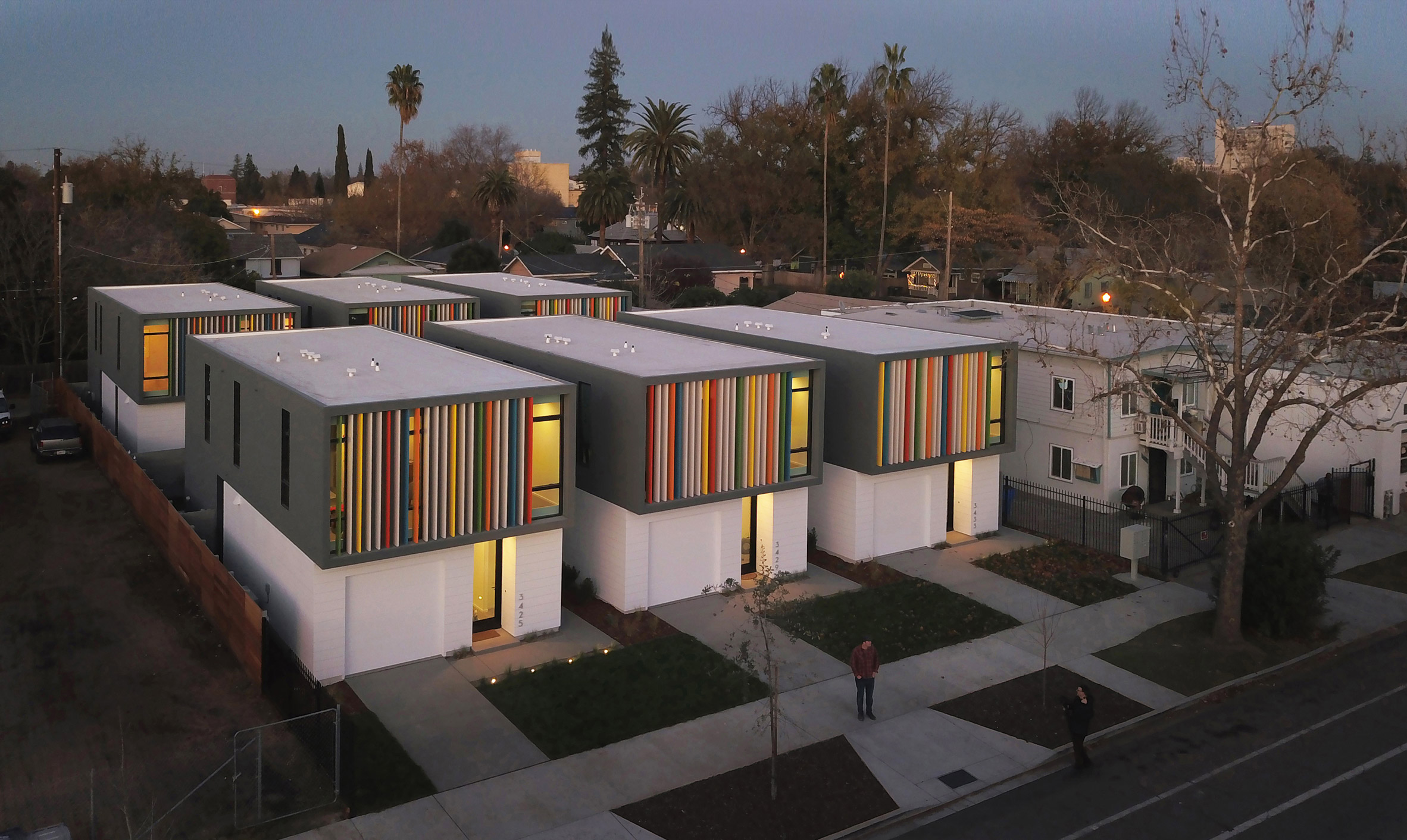 Johnsen Schmaling Architects was started in 2003 by architects Brian Johnsen and Sebastian Schmaling. Others projects by the studio include a family dwelling in rural Montana that comprises interlocking volumes clad in charred wood, and a cabin in a Wisconsin forest with exterior walls made of blackened pine.

Photography is by John J Macaulay.