American design studio BHDM has chosen warm materials and Spanish-influenced motifs for the interior of this bar, located at the top of the AC Hotel near New York’s Times Square.

One of the latest additions to the city’s array of rooftop bars, Castell occupies the top level of the Marriott-owned hotel, which was designed by Helpern Architects and opened Summer 2018. 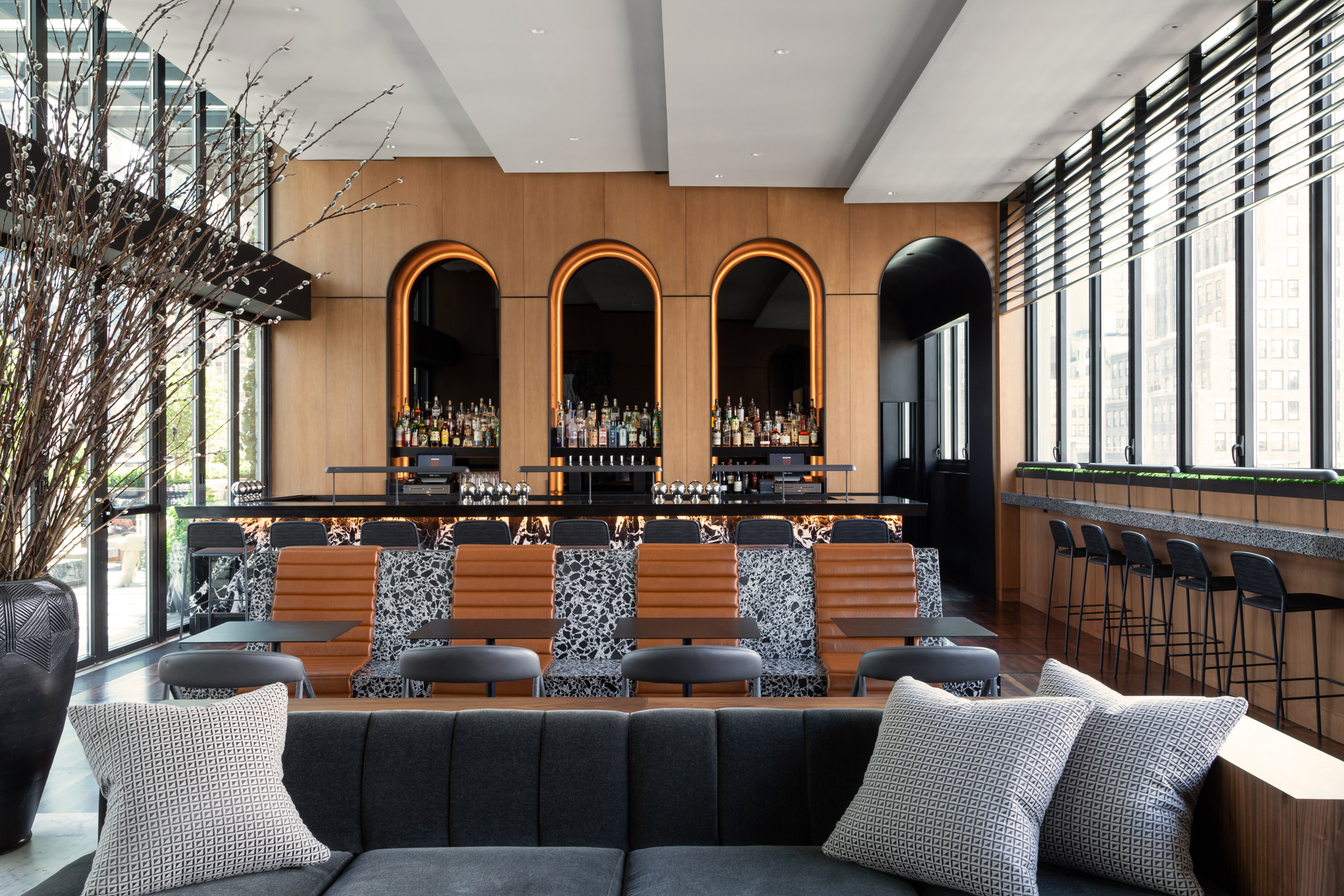 BHDM Design founder Dan Mazzarini was responsible for the bar’s interiors, which he envisioned as “a warm and sexy rooftop living room lounge with strong geometric influences, inspired by the vaults and shapes of Spanish architecture”. 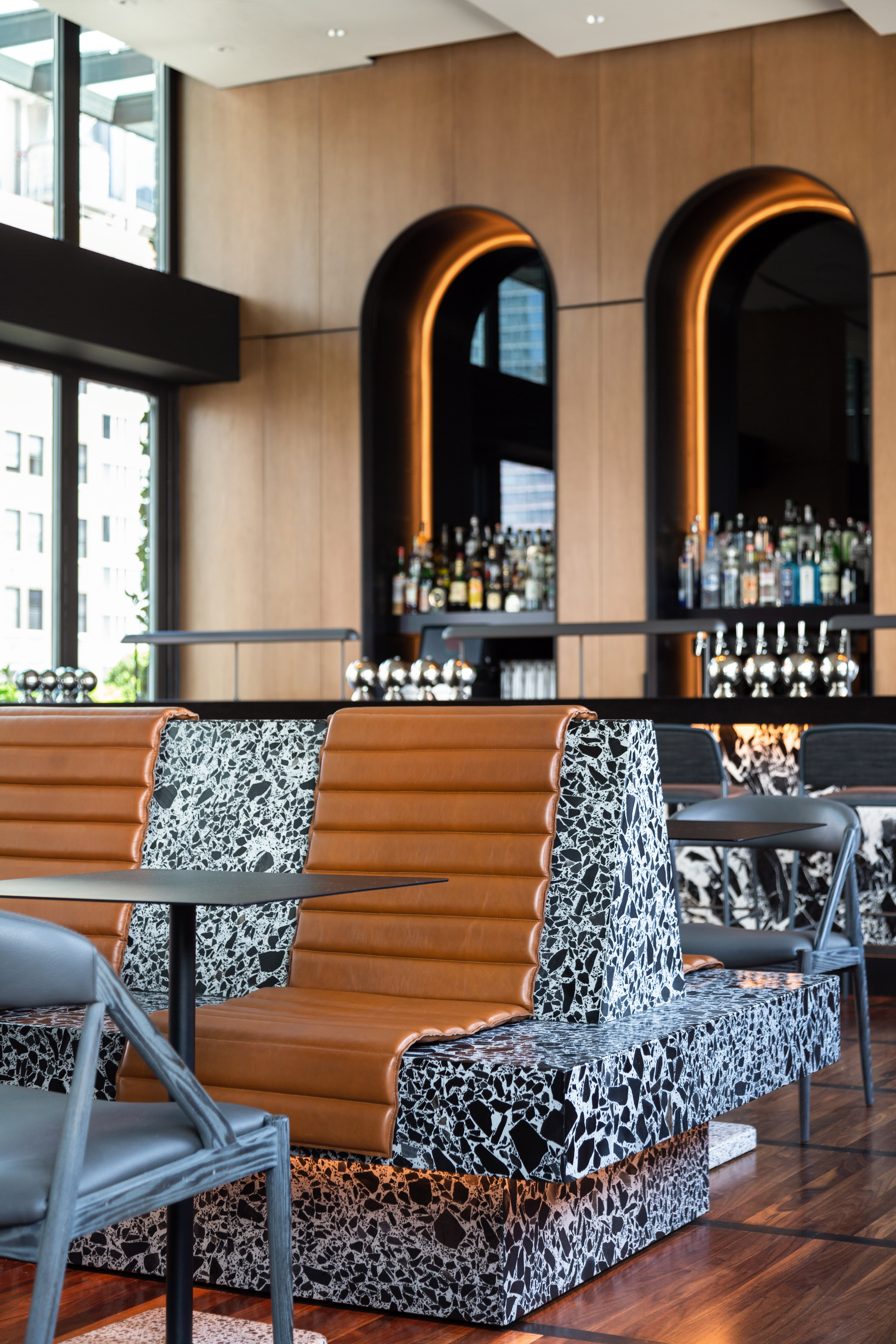 As a result, an 11-foot-tall (3.4-metre) arch is used as repeated motif throughout the space, acting as doorways, mirrors, and a backdrop for the bar counter.

“Through a series of rooms and geometric vignettes, BHDM designed Castell to be the premier Midtown rooftop destination,” said a project description from the studio. 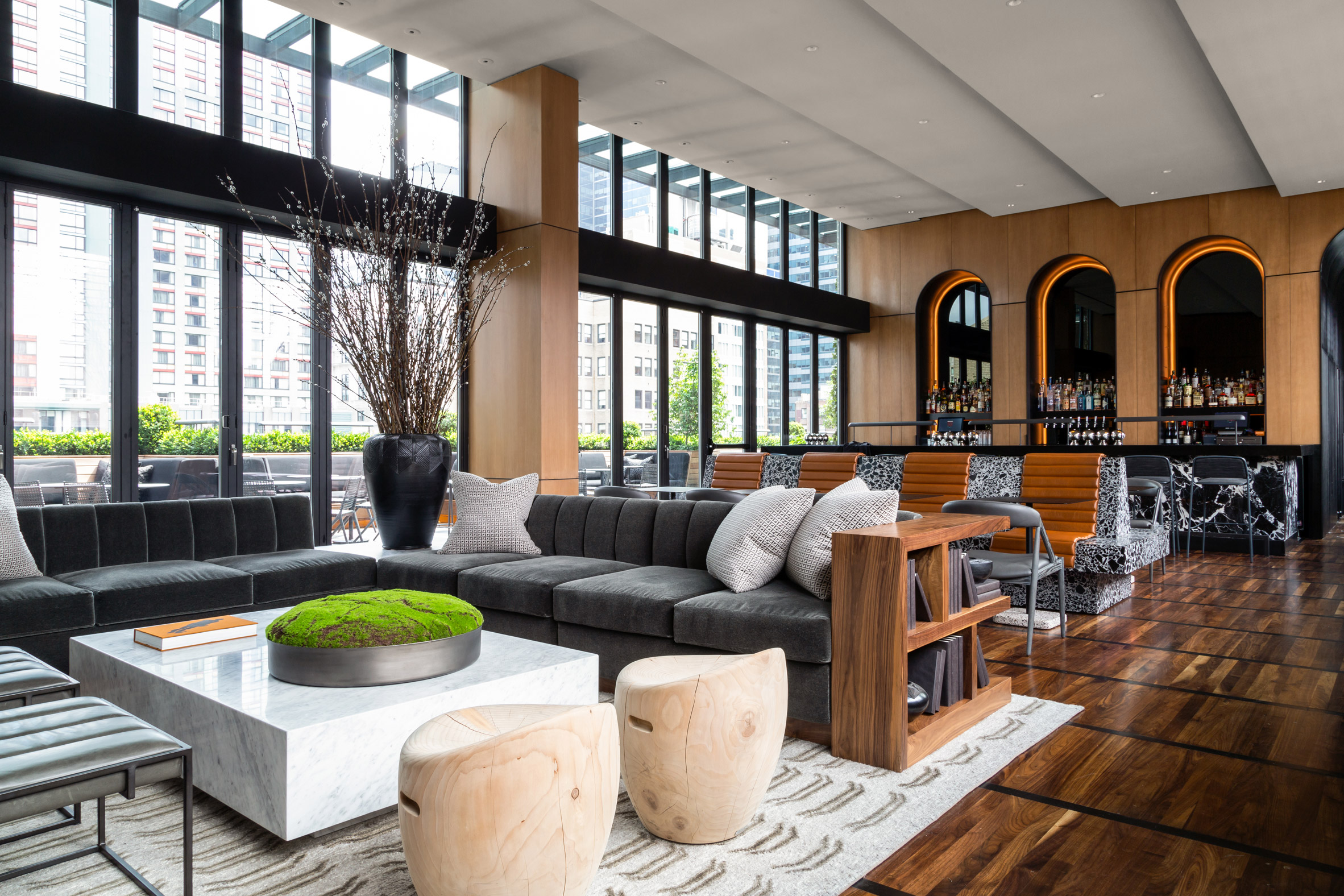 After exiting the elevators, visitors arrive in a cosy space styled like a living room. Walls lined in warm-toned walnut and plenty of soft furnishings create an intimate atmosphere, aided by a large fireplace that offers a view through to the bar area next door.

This adjacent, larger space is lighter and brighter, thanks to windows on both sides. Bar stools run along the south-facing stretch, where guests can enjoy drinks while gazing up at the Empire State Building. 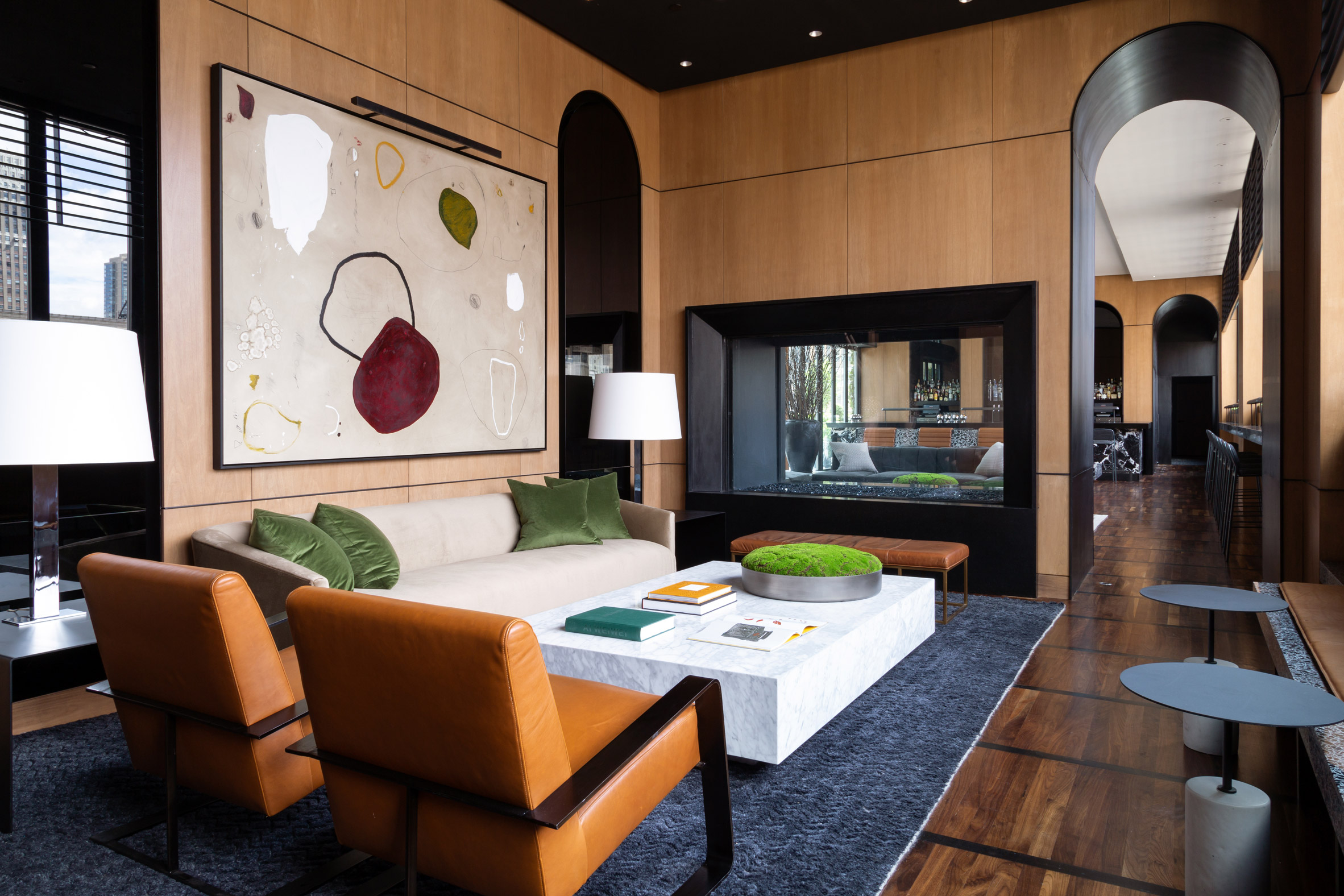 In the centre of the room, a built-in bench made from black and white speckled terrazzo is topped with tan leather cushioning, and accompanied by small tables for casual dining.

More seating is provided in the form of velvet-upholstered sofas around the fireplace, which measures nine feet (2.7 metres) across.

The service counter at the rear is faced in huge slabs of French marble and topped with a black fixture. Artwork on the walls was specially commissioned for the project.

At night, the rooms are transformed with moody cove lighting, highlighting the staggered ceiling, and spotlights that pick up the tones of the walnut walls. 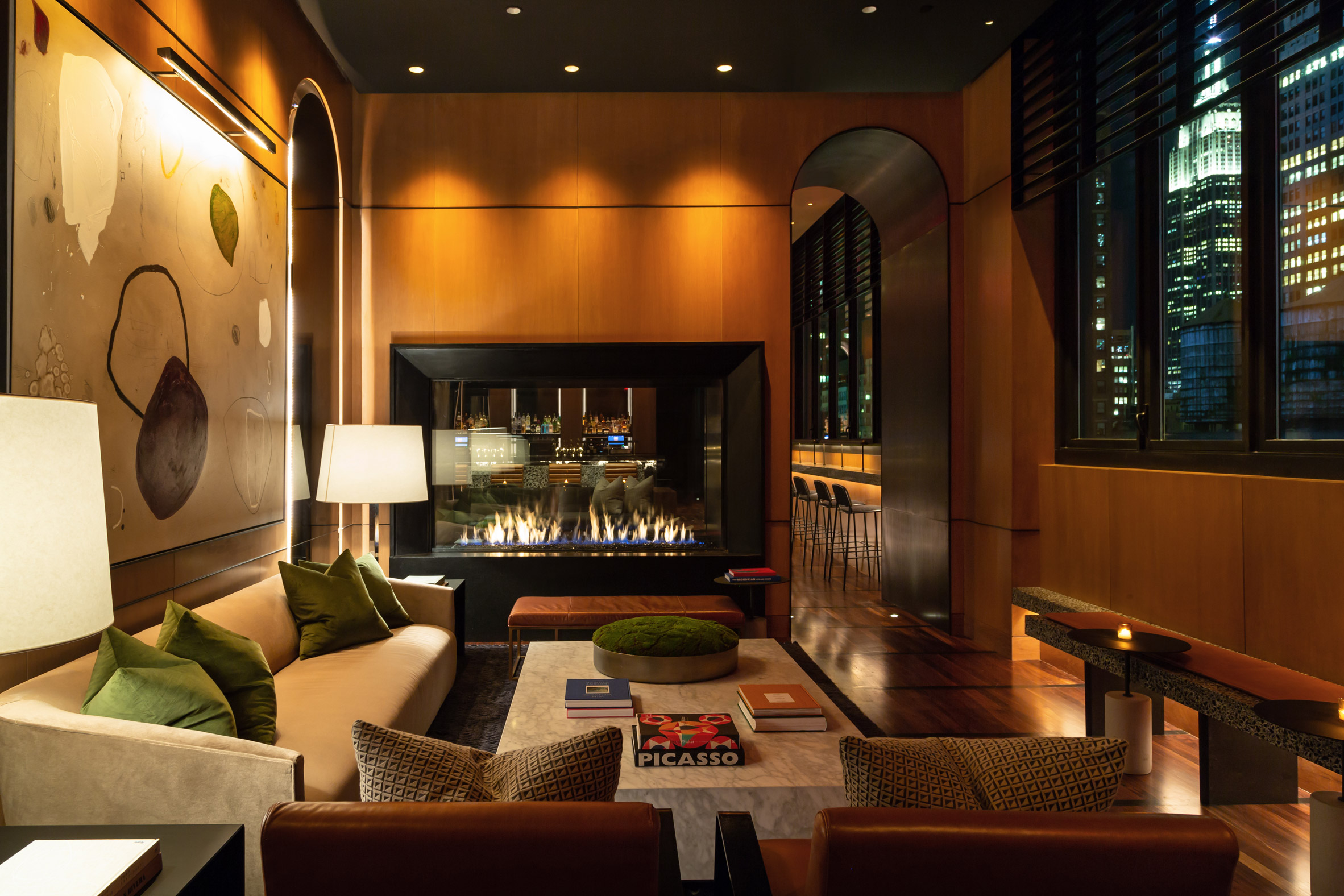 “Into the evening, the glittering city outside takes centre stage while lighting throughout dims to a warm glow,” said BHDM.

The studio also designed Castell’s open-air terrace, accessible through the floor-to-ceiling glass panels that form the bar’s north wall and open entirely when the weather is warm. 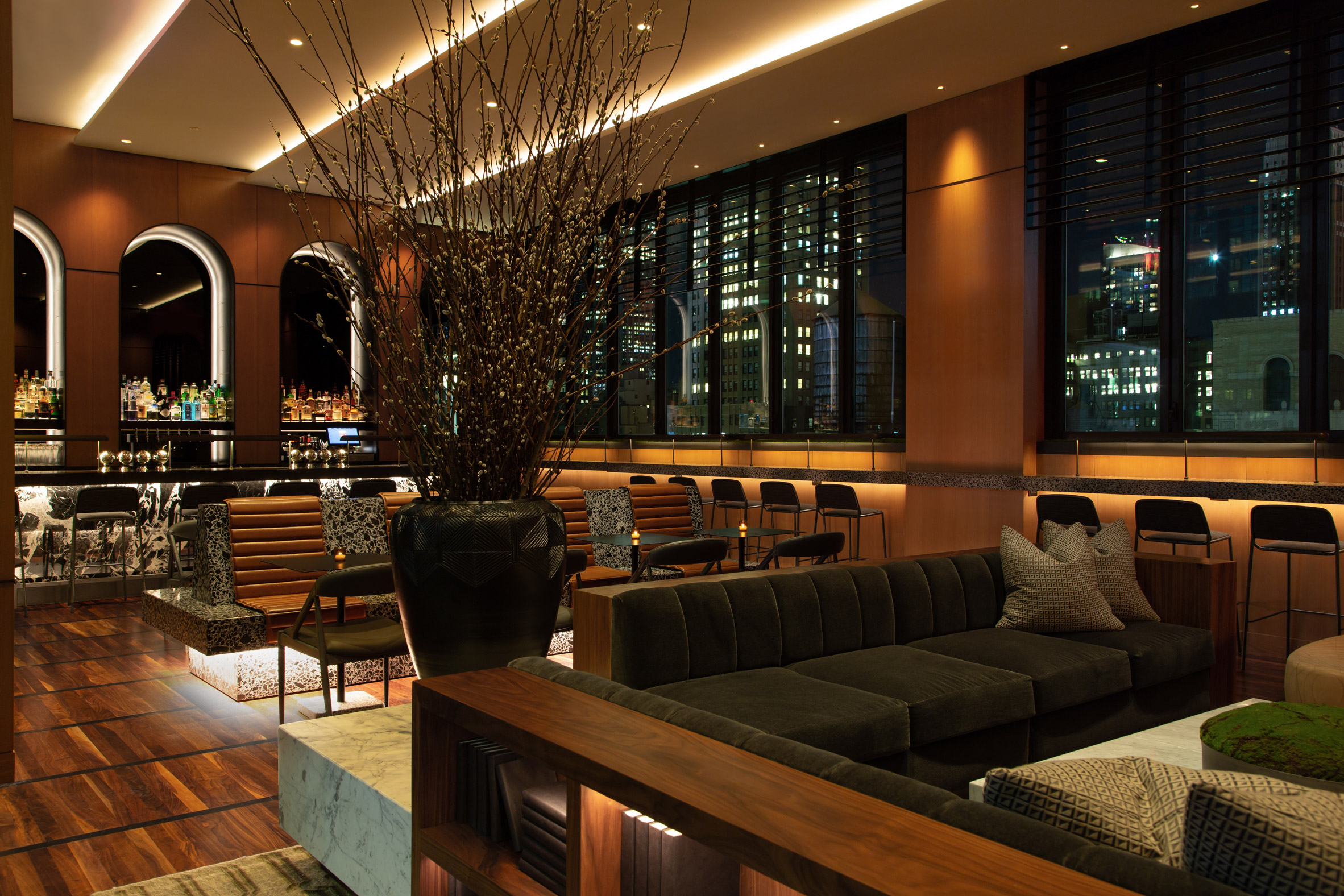 “BHDM’s aim was to create an outdoor room with residential sensibility that capitalised on the sizzle and sparkle of the city as backdrop,” said the studio. 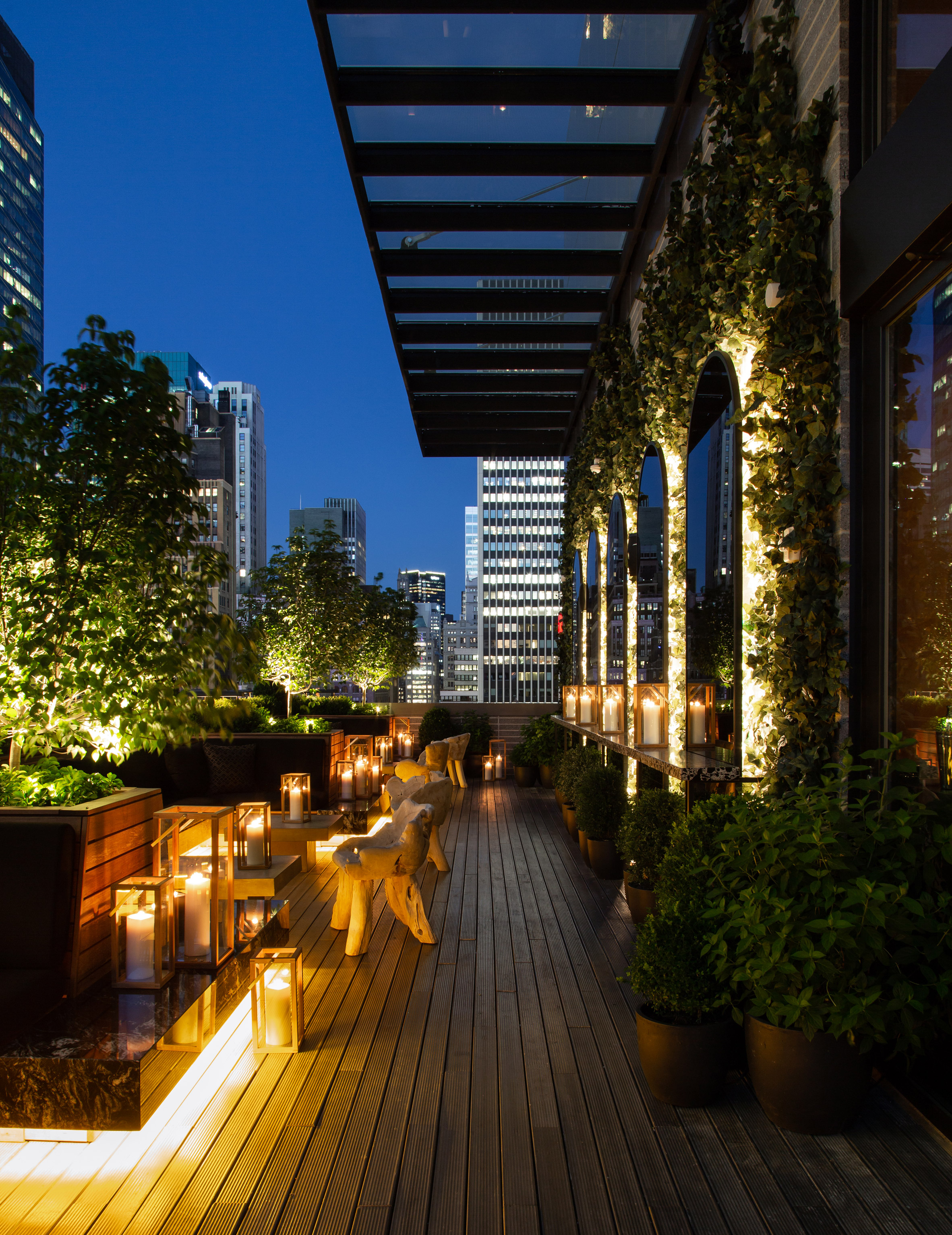 For other impressive vistas of the New York skyline, recently completed options include the Woods Bagot-designed Manhatta restaurant atop a modernist skyscraper in the Financial District, and the rooftop bar at The Hoxton hotel in Williamsburg.

Based in the city, BHDM is best known for its hospitality projects. The studio recently completed “the most instagrammable hotel in Hawaii” and previously worked on the interiors for boutique lodgings in Miami Beach.